Gold dropped in Asia, tried to rally in London but the rally failed, and then gold fell through end of day. The long black candle was a bearish continuation, forecaster dropped, moving deeper into its downtrend. Gold is in a downtrend in both the daily and weekly timeframes.

Gold/euros fell -28.27 [-1.73%] to 1601.36 on heavy volume. The long black candle was a bearish continuation, forecaster dropped, moving deeper into its downtrend. Gold/euros is in a downtrend in all three timeframes.

Well. No short-covering on today’s plunge. That’s not good news. The banksters currently have no fear. Gold RSI7=18, which is oversold. While a chunk of today’s move was about the strong dollar rally – mostly, this was just about a declining gold price. Today marks a new 9-week low for gold. 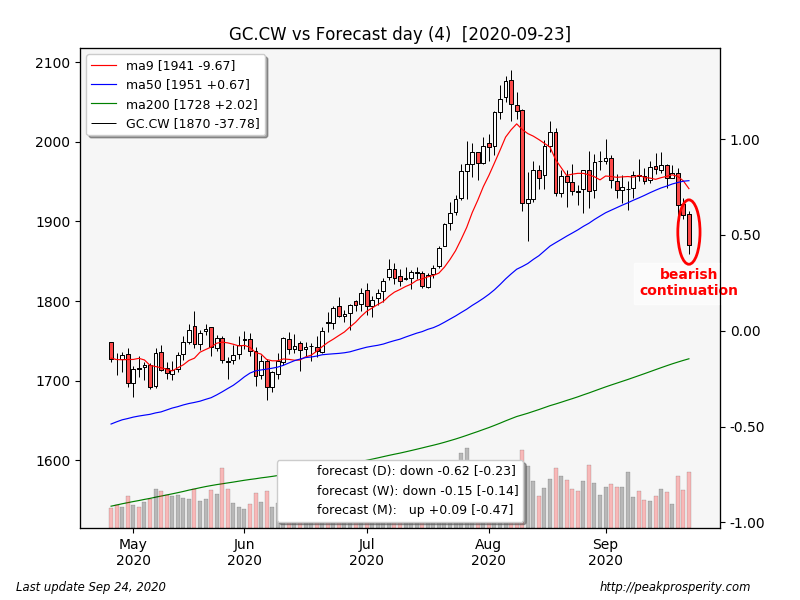 Silver mostly just fell all day long, ending the day near the lows. The strong line candle was a bearish continuation, forecaster climbed, but remains in a downtrend. Silver is in a downtrend in all three timeframes.

There was a small amount of short-covering, but probably not enough to make any sort of difference. Silver’s RSI7=12; that’s very oversold. Even so, no low yet for silver. The strong move higher in the gold/silver ratio looks quite bearish. 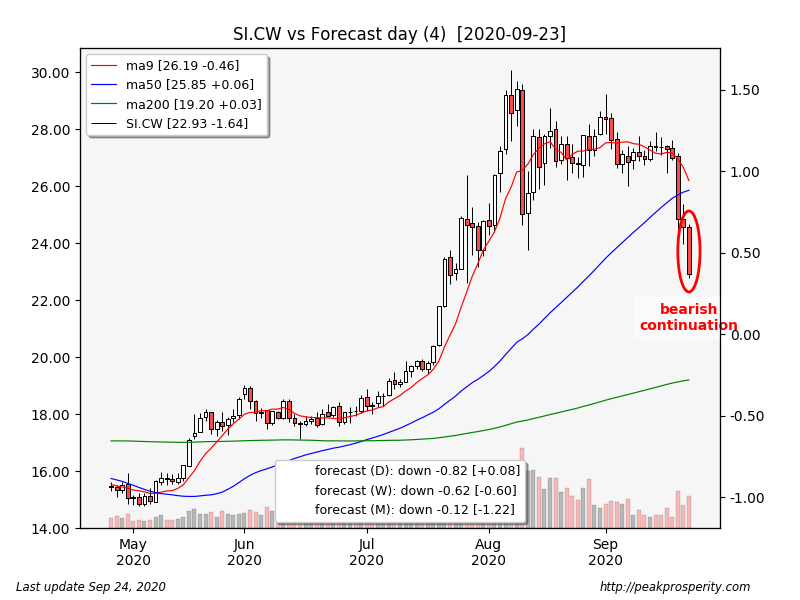 The miners gapped down at the open, then sold off all day long, bouncing slightly at the close. GDX plunged -5.97% on extremely heavy volume, and GDXJ plunged -7.70% on extremely heavy volume also. XAU dropped -6.73%, the opening black marubozu candle was a bearish continuation, forecaster dropped, moving deeper into its downtrend. XAU is in a downtrend in both the daily and weekly timeframes.

Miners remain in a monthly uptrend, but not by all that much. Daily RSI7=21, which is oversold. No low for the miners either – but at least they didn’t drop worse than silver. I guess that’s a plus. Today marked an 11-week low for the mining shares. 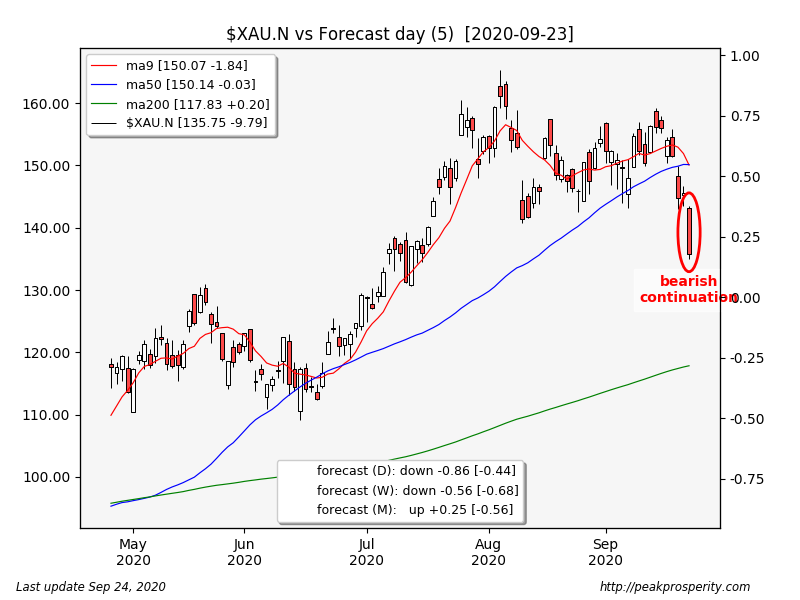 I’m still thinking that platinum might be the tell. Once it slows down, we might have a low.

Copper plunged -0.12 [-3.91%] to 2.95 on heavy volume. The opening black marubozu candle was a bearish continuation, forecaster fell, dropping into a downtrend. Copper is now in a downtrend in both the daily and weekly timeframes.

Copper was hit hard today, dropping all the way down to the 50 MA. Is this finally a real downtrend for copper? We have seen a number of headfakes lower. Might this be the real thing? Definite risk off signal. 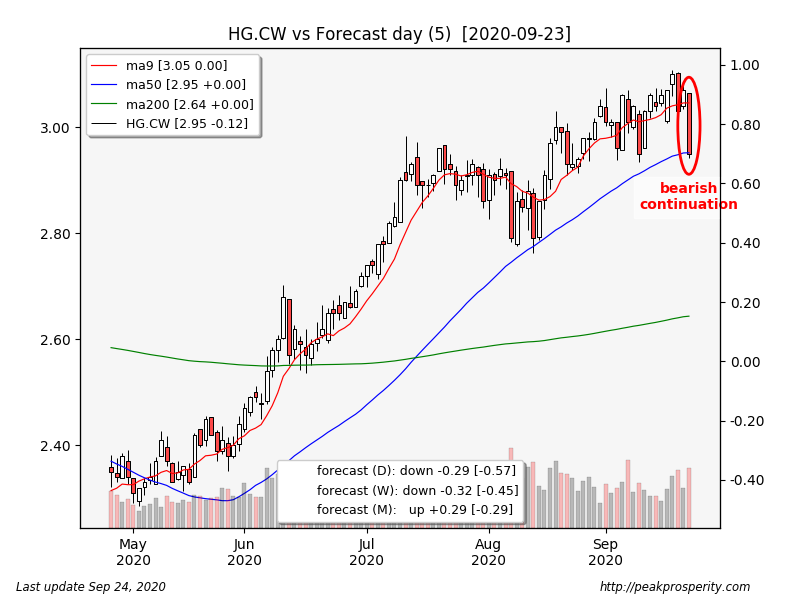 The buck climbed +0.42 [+0.45%] to 94.43 on moderate volume. The long white candle was a bullish continuation, forecaster dropped, but remains in an uptrend. The buck is in an uptrend in the daily and weekly timeframes.

That’s 3 straight strong rally days for the buck – which sure seems to line up well with the 3 strong down days for gold. 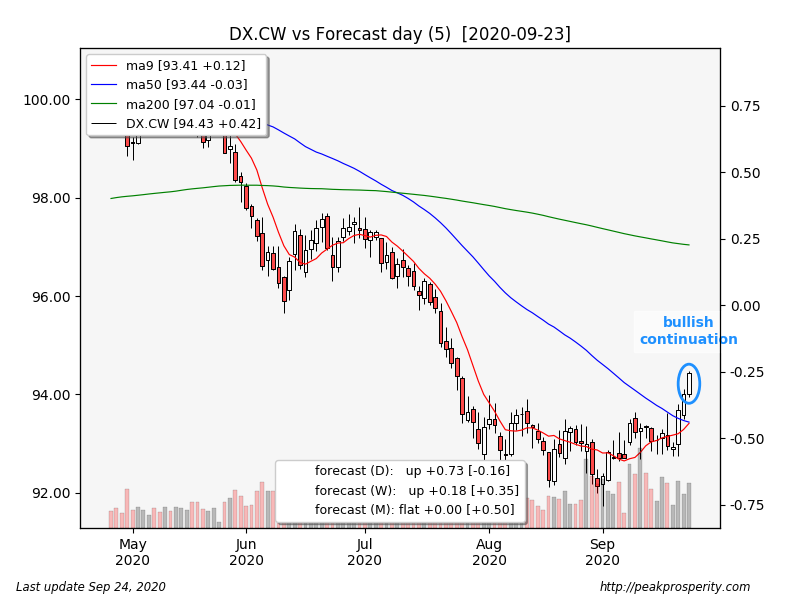 Crude inched down -0.15 [-0.38%] to 39.64 on moderately light volume. The high wave candle was a low-percentage bearish reversal (27%), but forecaster climbed, rising into an uptrend. Crude is in an uptrend in the weekly timeframe.

Crude staged a mostly-failed rally today; in spite of the positive signal from forecaster, it feels like crude is probably headed lower. 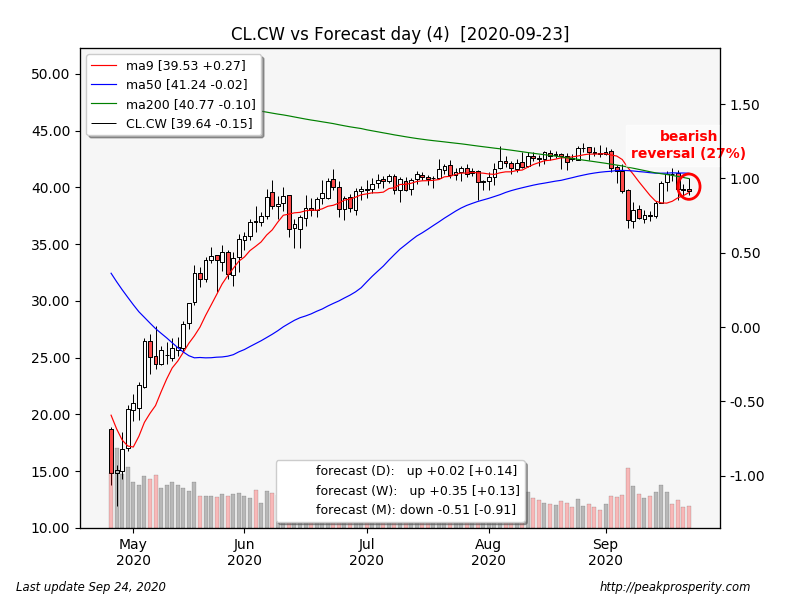 SPX plunged -78.65 [-2.37%] to 3236.92 on moderate volume. The long black candle was a reasonably strong bearish reversal (43%), forecaster dropped, moving deeper into its downtrend. SPX is in an uptrend in the monthly timeframe.

Well so much for yesterday’s swing low print – it was crushed by today’s big plunge. SPX weekly has dropped into a state of no-trend, while daily is now in a strong downtrend. NYSE decline ratio (inverse of advance ratio) jumped to 90%; most everything dropped today. 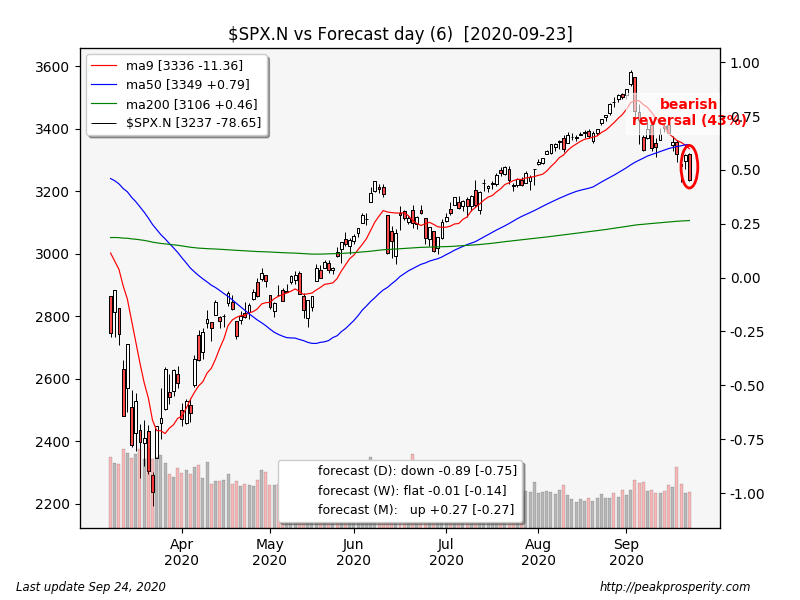 TLT climbed +0.13%. The takuri line candle was a possible bullish reversal (34%), forecaster climbed, but remains in a downtrend. TLT is in an uptrend in the weekly timeframe. The 30-Year yield was unchanged at +0.0 bp to +1.42%.

TY inched down -0.01%. The high wave candle was a reasonably strong bullish reversal (49%), forecaster climbed, moving higher into its uptrend. TY is in an uptrend in the daily and weekly timeframes. The 10-Year yield fell -1.0 bp to +0.67%.

So we see a large drop in equities, but bonds barely move. The massive US treasury bond market: destroyed by the Fed. It is why I don’t bother posting charts anymore. There is no signal to be seen.

JNK dropped -0.94%. The belt hold candle was a reasonably strong bearish reversal (48%), forecaster dropped, moving deeper into its downtrend. JNK is in a downtrend in both the daily and weekly timeframes.

Crappy debt cratered, making a new 10-week low – it is now cleanly through the 200 MA. The move yanked the weekly into a strong downtrend as well. That’s risk off and then some. 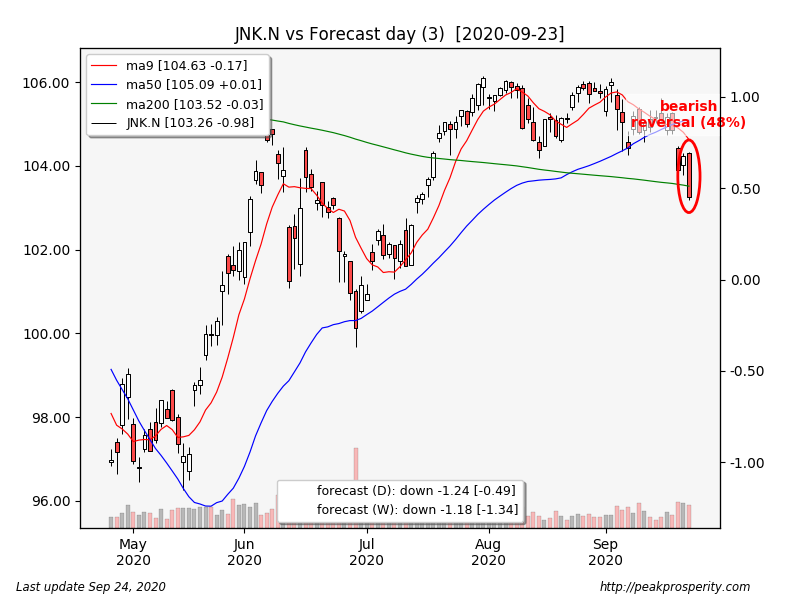 The GLD ETF tonnage on hand dropped -11.09 tons, with 1267 tons remaining in inventory.

It was a terrible day for both silver and the miners, and somewhat less terrible for gold. There was no (material) short-covering by the banksters; this suggests lower prices are ahead. My theory is, the emboldened (and perhaps, relieved?) banksters will probably continue pushing prices lower ahead of this month’s delivery date until they run into the goldbug dip-buyers. Who have yet to appear.

Are we there yet? I think we’re getting close. Premiums on silver are moving higher.

Is the rally in the buck causing the move in PM. My guess is no – the moves in the buck aren’t nearly large enough to account for the plunge. Gold/Euros has now broken below 1620 support – it isn’t just a currency effect. Perhaps our friends across the pond aren’t interested in gold right now.

The decline in risk assets is starting to become more of a real thing. Crappy debt is now below all 3 moving averages, while SPX is heading down towards its own 200. Copper might be headed lower too. To my eye, this is all being led by the banksters; XLF has really dropped hard, making a new 11-week low. XLF fell below its 200 MA way back on Monday; a 6% drop over the last 3 days.

Why XLF? The debt chickens must eventually come home to roost; mortgage forebearance will end, eviction prohibition will end. Someday. Maybe the money laundering will have to end also. [Ok, that marks me as an optimist. But it could happen!]

As I said, we are approaching end of month. Next week the banksters will have to cough up physical gold and silver bars to anyone standing for delivery. Presumably the more longs they can flush out prior to that date, the fewer bars they will have to surrender.

My eye continues to be on the big bar premiums.

Interesting on the PM Physical Premiums here in Oz:

It looks while the spot Silver price crated, the Retailers of 1oz coin have barely moved their prices, lets see if that holds.

Just more confirmation for all those tinfoil hat people out there. Metals are manipulated. I’m sure no one goes to jail, but the prosecutors get to put this on their resume – see, we’re tough on the banks (wink, wink), while the banks get to keep the couple billion in profit they pocketed over that period of time.

Probably the next step for these “public servants” will be counsel for the big banks, ala our fearless former AG Holder.

I think I’m going to take a page out of the Robinhooder’s trade book and buy some short-term call options on the miners. After such a beat-down, they look ripe for a bounce over the next week or two.

I’m glad to know that I’m not the only one around here that can jinx the miners, lol.

Sentimentrader has put out a nice piece on the dollar, basically saying this bounce will be pathetic and short-lived. His backtesting shows that gold isn’t an effective way to play a weaker dollar in this situation.

Is there anyway to play the dollar directly in the options market?

oil continues to be de-funded.  How much longer, that is the question?  Battery day was a flop revealing that new developments are still several years away.  Tesla is having a nice correction.

this fact indicates that we will be using fossil fuels for some time to come.

Dave, keep an eye out for a bottom in the energy space.  Thank you!