Gold chopped lower for most of the day, ending the day near the lows. The long black candle was unrated, forecaster climbed, but remains in a downtrend. Gold is in a downtrend in both the daily and weekly timeframes.

Gold/euros dropped -4.91 [-0.30%] to 1629.64 on moderate volume. The long black candle was unrated, forecaster dropped, moving deeper into its downtrend. Gold/euros is in a downtrend in both the daily and monthly timeframes.

Yesterday gold was clocked; today was a mild move lower, but it was not a new low. Nor was it any sort of bullish reversal. Gold/Euros looks better than gold/USD; certainly a chunk of gold’s plunge was a currency effect. Gold remains in a downtrend. 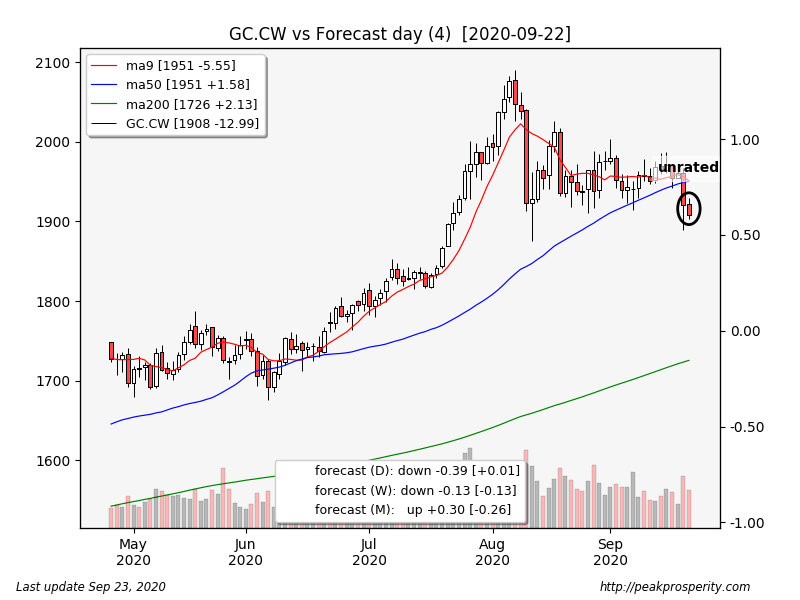 Silver also mostly chopped lower today. The spinning top candle was unrated, forecaster dropped, moving deeper into its downtrend. Silver is in a downtrend in both the daily and weekly timeframes.

There was some short-covering on yesterday’s big plunge, but almost none today. Silver is cleanly through the 50 MA, and the buyers have yet to appear. Until the dip-buyers appear, there will probably be lower prices ahead. 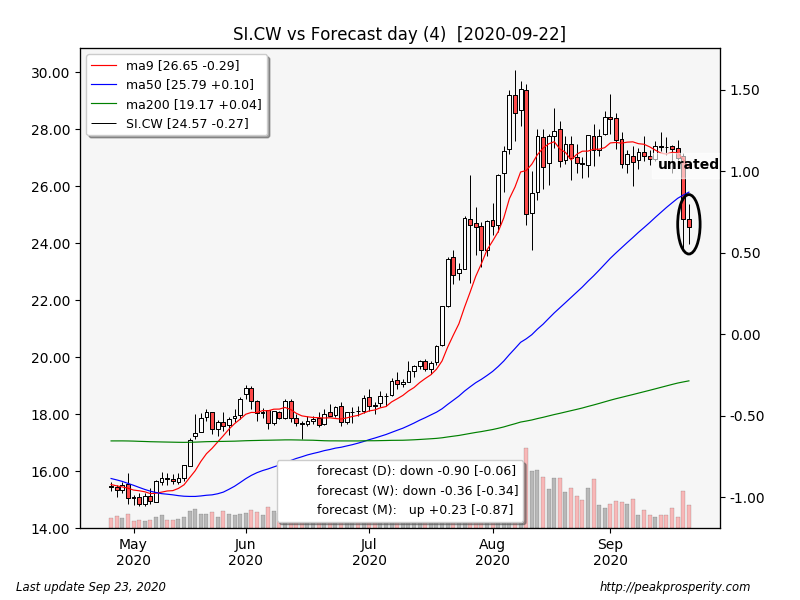 The harami pattern was weak; certainly the miners did better than either of the metals, but it wasn’t any sort of bullish reversal, unfortunately. 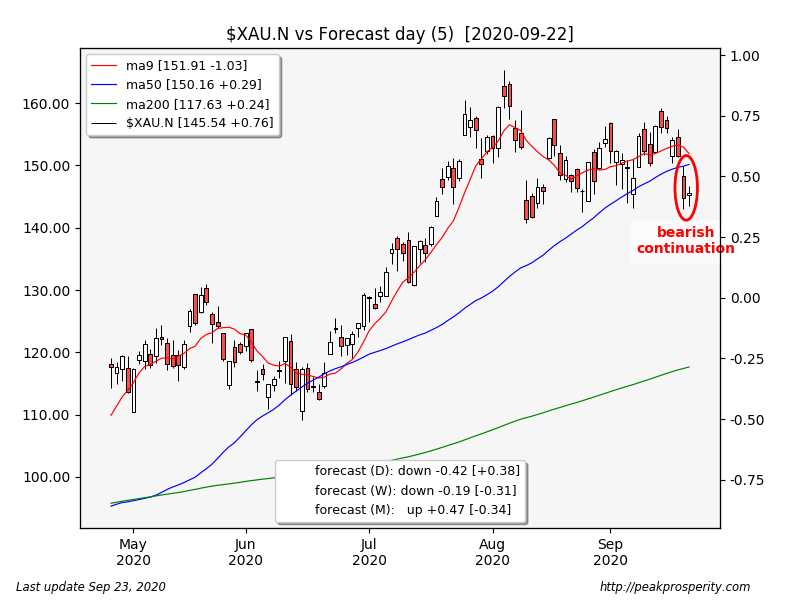 Copper rallied +0.04 [+1.32%] to 3.07 on moderate volume. The bullish harami candle was a bearish continuation, forecaster climbed, moving higher into its uptrend. Copper is in an uptrend in all three timeframes.

Copper is just relentlessly bullish. Yesterday’s big correction was mostly retraced – copper is back above the 9 MA, and it remains in an uptrend. 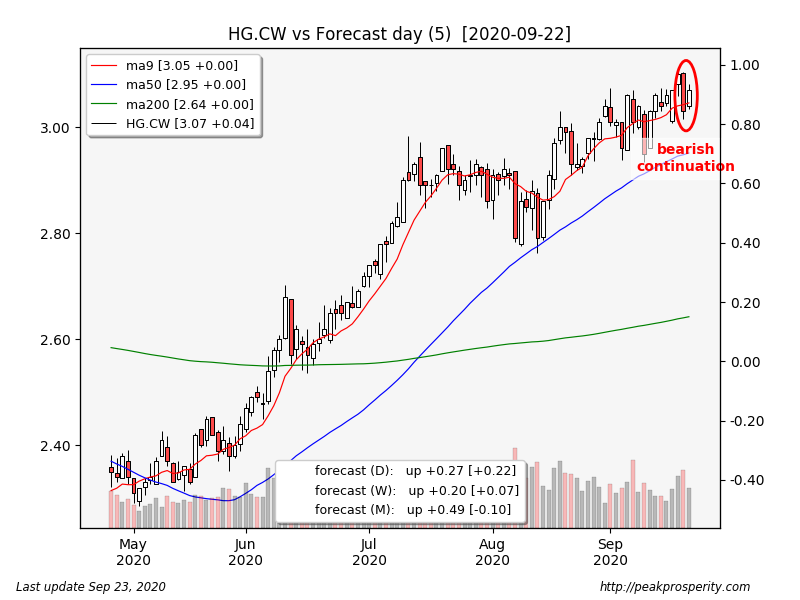 The buck climbed +0.33 [+0.35%] to 94.01 on moderate volume. The swing low2 candle was a likely bullish reversal (65%), forecaster climbed, moving higher into its uptrend. The buck is in an uptrend in the daily and weekly timeframes.

The buck has executed its bullish reversal at long last, causing all sorts of havoc in the process. 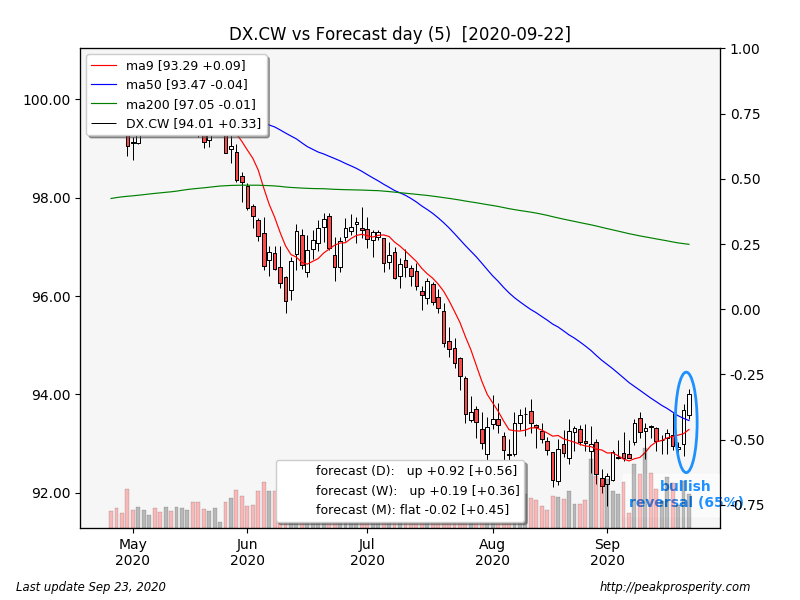 Crude fell -0.07 [-0.18%] to 39.79 on moderately light volume. The doji candle was unrated, forecaster dropped, moving deeper into its downtrend. Crude is in a downtrend in both the daily and monthly timeframes.

Crude has resumed its downtrend – although it is a very gentle one. 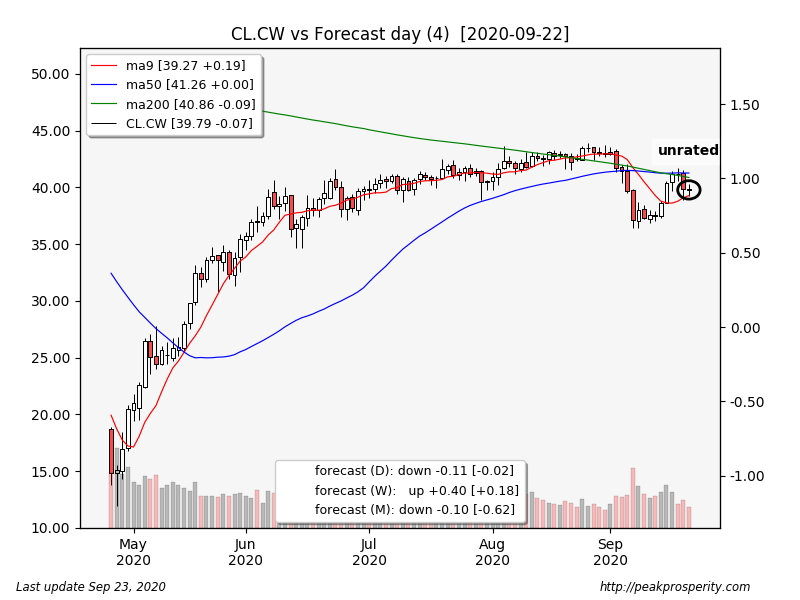 That’s a strong bullish reversal candle print for equities, but NYSE advance ratio was 56%, which was just mildly bullish. SPX is still below both the 9 and 50 MA lines, but it doesn’t appear to be in any hurry to correct. 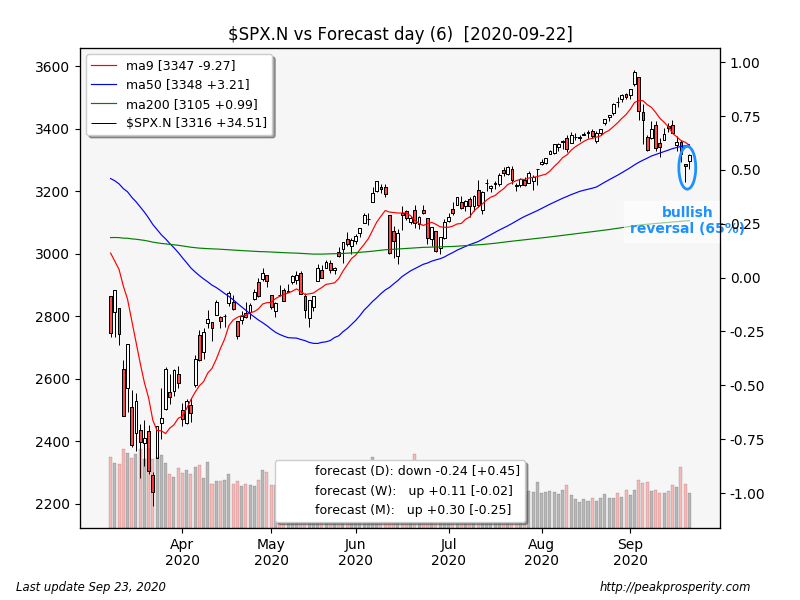 TLT inched down -0.08%. The spinning top candle was a bearish continuation, forecaster climbed, but remains in a downtrend. TLT is in an uptrend in the weekly timeframe. The 30-Year yield fell -1.0 bp to +1.42%.

JNK climbed +0.32%. The bullish harami candle was a bearish continuation, forecaster dropped, moving deeper into its downtrend. JNK is in a downtrend in both the daily and weekly timeframes.

Unlike equities, crappy debt did not execute a bullish reversal today. 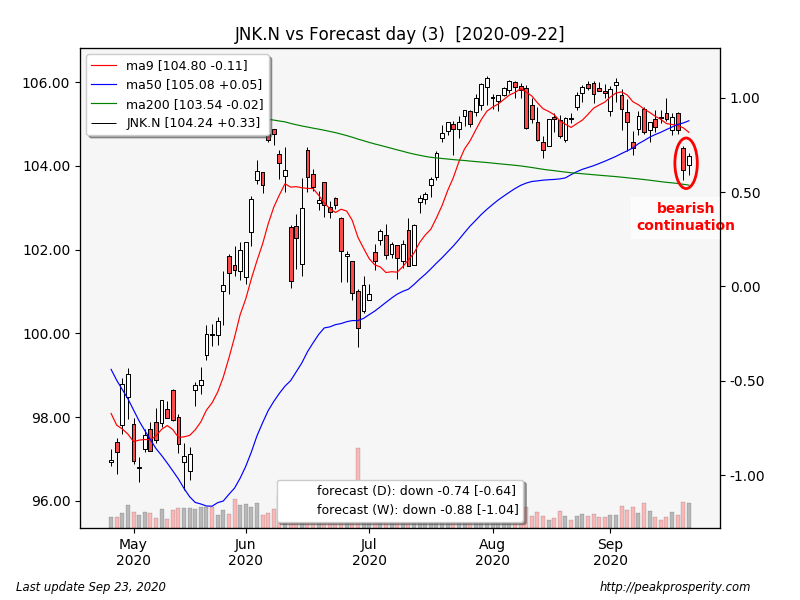 The GLD ETF tonnage on hand dropped -0.59 tons, with 1278 tons remaining in inventory.

Discounts have shrunk on physical ETFs – PHYS is even in premium – while premiums continue to drop on physical bars.

The recent heavy moves higher in the buck are causing some much larger moves down in gold, silver, platinum, and palladium. The mining shares aren’t immune, but there did seem to be some dip-buyers today, which is the lone positive sign for the group.

Dip-buyers did appear for equities, which printed a strong-looking reversal pattern; copper agreed (it is relentlessly bullish, as I said earlier), but crappy debt wasn’t nearly as strong, and crude just moved sideways.

Remember when I said I was expecting increased volatility going into the election? My broker just sent me a notice on point:

So was Tesla Battery Day a sell-the-news event? Bearish high wave (41%), and a forecaster downtrend. Yes, it probably was. Who might have been selling? Perhaps the company itself. $5 billion in that secondary offering needed to be offloaded to bagholders.

The banksters (JPM, HSBC, DB) are also having issues; “I’m shocked, simply shocked to find out there is money laundering is going on.” BuzzFeed got a massive leak of bankster SAR filings – banks are required to file SARs on anything that looks funny to them. Apparently, the US government does next to nothing with the information.

DB the stock dropped 10% over the last two days.

PM’s … Miners … OUCH … I can’t watch this any longer … Re-balanced for the day … Going outside and plant some more seeds and finish getting the garden ready for the winter planting.

Let us know when silver seems to be bottoming.

Run to the $USD continuing?

As of this morning my time, AUD has dropped almost 5% so far this month (from USD 74 to under 71c) and most of this change is in the last week.  It is interesting for us in Oz, how the AUD/USD acts as a Shock Absorber with Gold.  For us Gold is still in the same range for the last month or so.  Silver really has blown off it’s top, and is starting to look better value.

Looking at Silver, I’d not be surprised if it drops back to A$28-29 oz removing most of the big bubble of the last couple of months (so another 10-15% down?)

Personally, I think I’m going to start buying SLV and PAAS calls if spot silver hits $21-ish USD. I have no clue where the bottom might be so I will just try to buy incrementally.

What do you think Chief?

You are the bottom-calling master after your call in the Spring.

Edit: Did you hold on to that TSLA put?

When to Swap Gold for Silver?  The following are $AUD Gold & Silver price changes against the GSR (on a 5y, YTD, 3mth timeframe).  For us it seems that the GSR (black Line), does not like being above Gold for long, and if anything seems bounce off lows to touch the bottom of Gold and then drop back again.  If this holds, then there is still plenty of room to go yet before selling Gold and Buying Silver.

Any speculation on why the run on the dollar? Is it just normal ebb and flow and mean reversion, or some event?

Before leaving on my trip, I thought to myself, “that Battery Day sounds like a for-sure sell-the-news event” (especially with that $5B secondary overhang as a reason for both the pump, and the dump) so I sold my put, and confidently assumed I’d rebuy the day of.  Sadly, I forgot to take my 2FA device on my trip, so I could not execute the re-buy on Tuesday.  All I could do is watch as things happened exactly as predicted, but I was unable to take part!  I did pick up a ZM put today as it was topping out, but I’m a lot less sure about that one.  (No secondary, no obvious pump & dump)

The buck – I’m guessing it might be about DB and by extension, the EU banking system.  “It turns out that only profits from money laundering and fraud is keeping DB afloat.”  And the BuzzFeed money laundering story is really a DB money laundering story.   At least, that’s the only story of any consequence to hit over the weekend that I saw.  If the Feds have to put a halt to DB’s money laundering shenanigans, it might bring about a banking crisis – driving money into the buck.  Who was the source for the leak and why?  Someone sure dropped two decades of SARs on BuzzFeed – a bankster version of The Pentagon Papers – it would have been Assange in the old days, but he’s in the pokey under some Trumped-up charge.  (Still curious why that is)

Gold and silver – still no low yet.  But the RSI is getting quite low.  Perhaps we just need to see some physical bar premium expansion to make the banksters nervous and force them to close their shorts.  Not yet though: Silver 100oz bars +5.34%, Gold kilo bars: +0.74%.  No goldbug dip-buying yet = confident bankster shorts.

Perhaps jmone is correct – support for silver happens at the previous highs.

When do the goldbugs start to jump back in to the physical market?  That might actually be the driver here.