Gold tried to rally in Asia and London, but the rally failed, with gold closing near the lows. The long black candle was a low-percentage bearish reversal (29%), forecaster dropped, but remains in an uptrend. Gold is in an uptrend in the daily and monthly timeframes.

Gold/euros climbed -0.82 [-0.05%] to 1658.77 on moderately light volume. The high wave candle was a possible bearish reversal (36%), forecaster dropped, but remains in an uptrend. Gold/euros is in an uptrend in the daily and weekly timeframes. 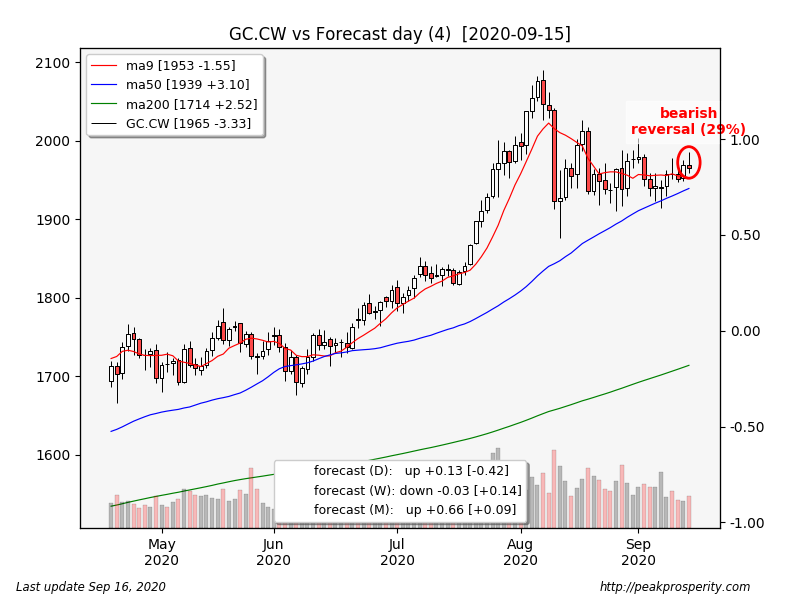 Silver also rallied in Asia and London, topping out at roughly 8 am, but then fell sharply, eventually also closing near the lows. The doji candle was a bullish continuation, forecaster climbed, moving higher into its uptrend. Silver is in an uptrend in all three timeframes.

Like gold, there was some modest shorting in silver, but the candle print for silver wasn’t bearish, the forecaster was more optimistic, and silver remains in an uptrend in all 3 timeframes.

Trading volume for silver has really fallen over the past few weeks. I’m not sure what that means – perhaps traders are really unsure about direction at this time. I know that’s how I feel! Forecaster is mostly optimistic, but I have this sense prices could go either way. I’d be a lot happier if those premiums on physical remained high – but they just continue to drop. 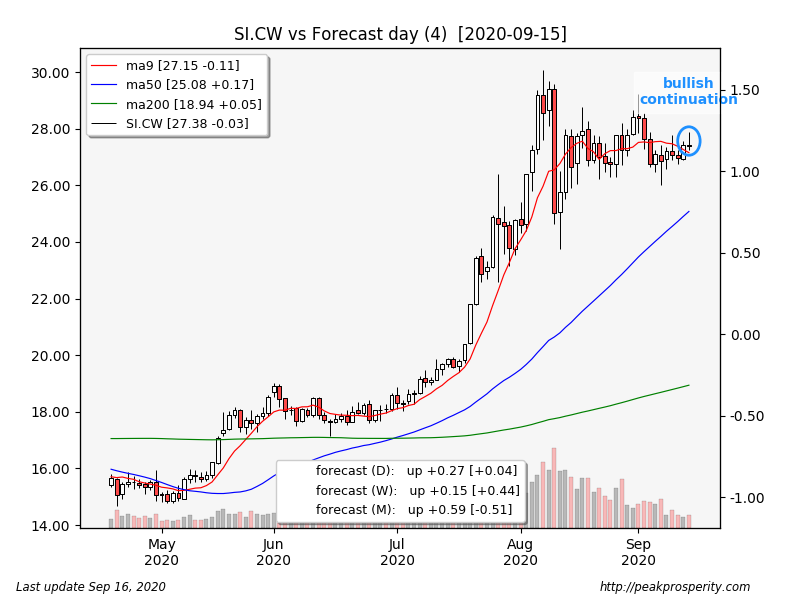 Miners gapped up at the open, then promptly sold off – an attempt to rally later in the day was also sold into the close. GDX was unchanged on moderately light volume, while GDXJ inched up +0.07% on moderate volume. XAU fell -0.14%, the long black candle was a reasonably strong bearish reversal (43%), forecaster dropped, but remains in an uptrend. XAU is in an uptrend in all three timeframes.

Today’s candle print was bearish, forecaster took a hit too, but the miners remain near their recent highs. It looks like distribution, but it wasn’t enough to push prices materially lower; the miners ended the day at the recent highs, in spite of all the selling. 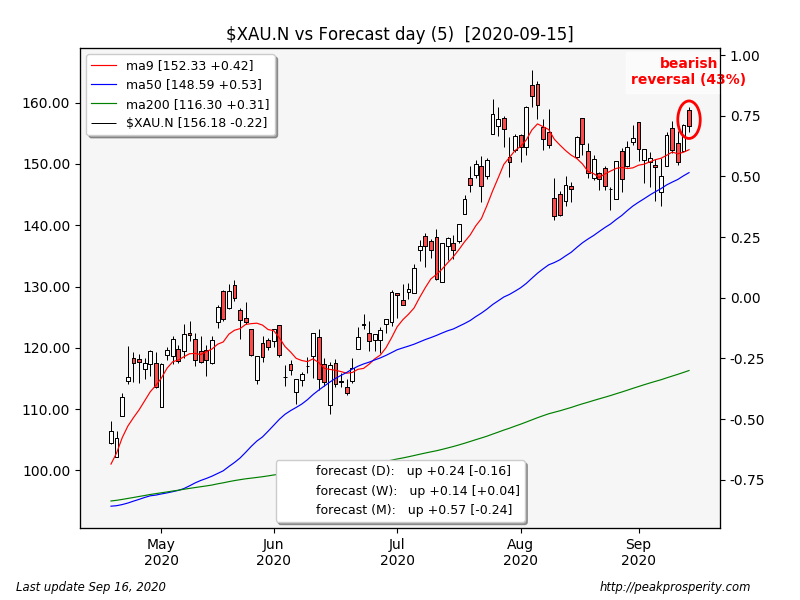 Copper fell -0.02 [-0.65%] to 3.04 on moderately light volume. The bearish harami candle was a bullish continuation, forecaster dropped, but remains in an uptrend. Copper is in an uptrend in the daily and weekly timeframes.

Copper seems to be chopping sideways just below the highs. The candle print wasn’t bearish, and price remains above the 9 MA, but forecaster is quite weak. I think downside risk for copper is fairly high right now – although the palladium/platinum rally has me wondering. 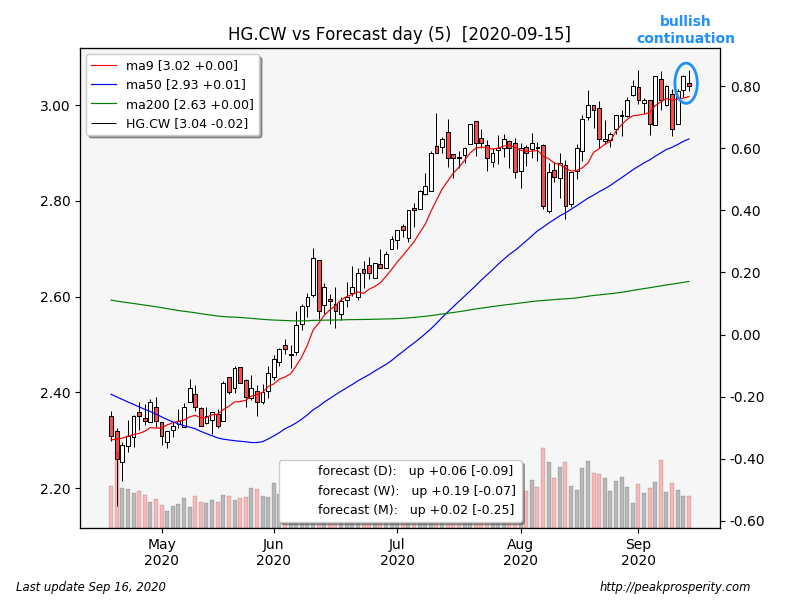 The buck inched up +0.03 [+0.03%] to 93.08 on moderately light volume. The doji candle was a bearish continuation, forecaster dropped, moving deeper into its downtrend. The buck is in a downtrend in both the daily and weekly timeframes.

The buck fell in Asia & London, but then came back to erase its gains by end of day. Once again, the moves in currency seemed to mirror the moves in PM – they all happened at roughly the same time. Its hard to say where the buck goes next. 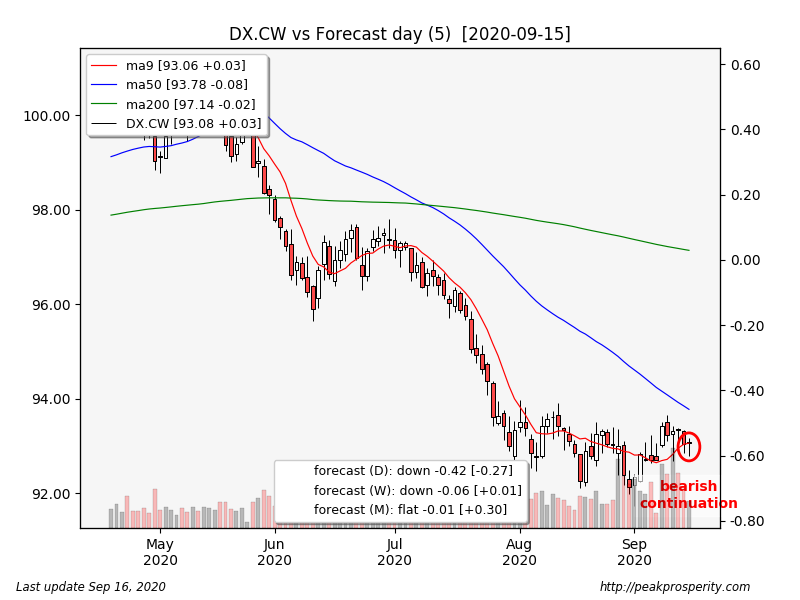 Crude shot up +1.10 [+2.93%] to 38.61 on moderately heavy volume. The long white candle was neutral, forecaster climbed, rising into an uptrend. Crude is still in a downtrend in both the weekly and monthly timeframes.

According to oilprice.com, the rally in crude was about the outages from Hurricane Sally. Downtrend over? I’m not sure. The weekly still looks pretty bearish. 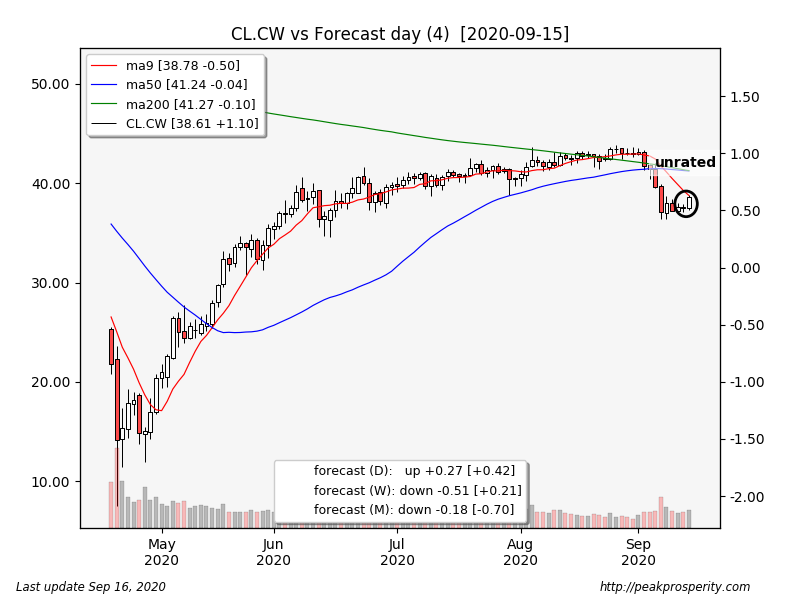 SPX climbed +17.66 [+0.52%] to 3401.20 on moderate volume. The spinning top candle was a possible bearish reversal (31%), forecaster dropped, but remains in an uptrend. SPX is in an uptrend in the daily and monthly timeframes.

While prices moved higher, all of the gains came in the futures overnight – prices actually declined during the trading day in New York. NYSE advance ratio was 55%, which isn’t all that bullish. Candle print was weak, but not terrible. Financials didn’t look good, which made the sector map look relatively weak. Under the covers, this wasn’t a very bullish day for SPX. 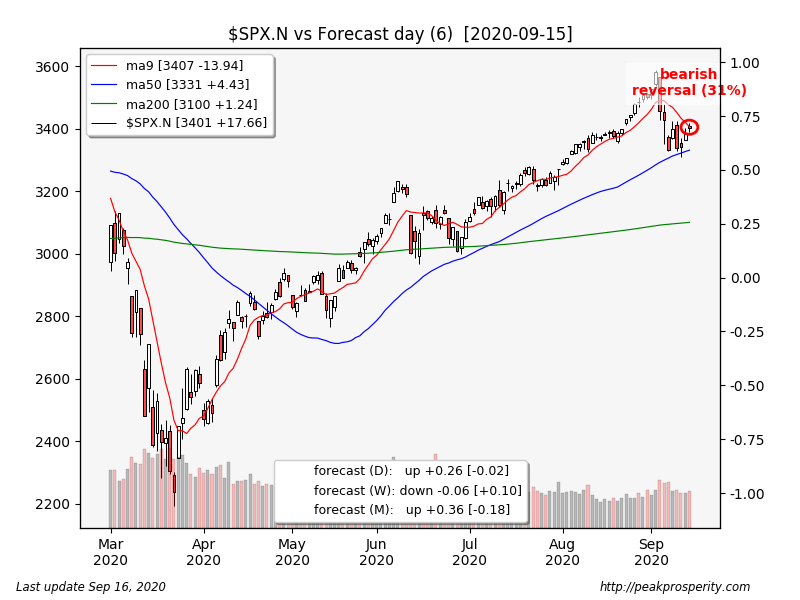 TLT dropped -0.24%. The swing high candle was neutral, forecaster dropped, but remains in an uptrend. TLT is in an uptrend in the daily and weekly timeframes. The 30-Year yield rose +1.0 bp to +1.43%.

TY inched down -0.09%. The bearish harami candle was a bullish continuation, forecaster dropped, but remains in an uptrend. TY is in a downtrend in both the weekly and monthly timeframes. The 10-Year yield was unchanged at +0.0 bp to +0.68%.

JNK climbed +0.22%. The doji candle was a possible bearish reversal (35%), forecaster climbed, rising into an uptrend. JNK is in an uptrend in the daily and weekly timeframes.

It was just a slightly bearish candle print, but a strongly bullish move in the forecaster. Weekly is still just cautiously bullish – but that looks stronger than SPX, which remains in a downtrend. 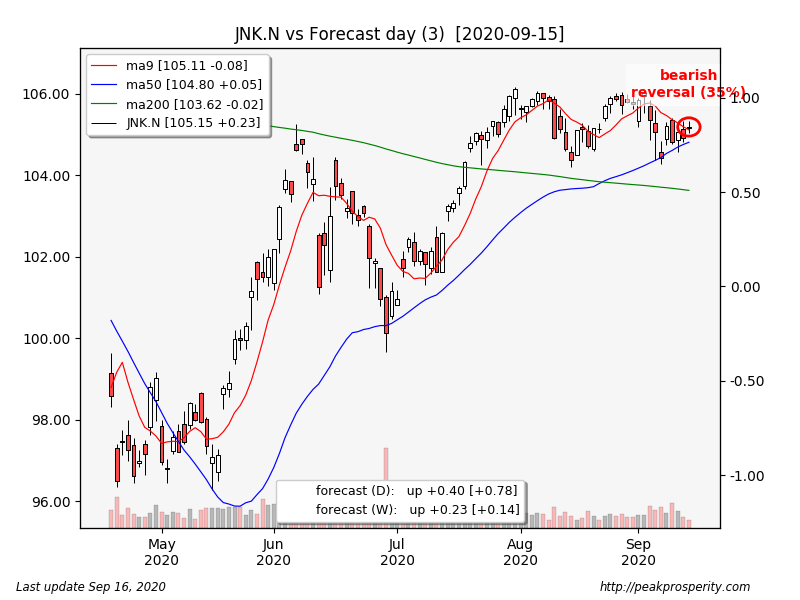 The GLD ETF tonnage on hand dropped -0.43 tons, with 1248 tons remaining in inventory.

Physical ETF discounts are slowly shrinking – but so are big bar premiums. Silver is down to 6%. That’s not supportive of a higher price for silver at COMEX.

Industrial Production: headline +0.36% m/m, manufacturing: +0.95% m/m. This was a tiny increase; industrial production has only recovered about half of the (17.7%) pandemic drop. Adding 0.36% doesn’t really move the needle at all.

Gold, silver, and the miners edged slightly lower today; the moves appeared to be driven largely by the currency markets, with PM acting more or less alongside moves in the Euro (and/or mirroring the moves in the buck).

This suggests that if we do get a rally in the buck, PM probably sells off. And vice versa.

Today’s rally in equities was entirely due to moves in the futures markets overnight; it was not a broad-based rally, and the financial sector looked especially weak. While crude moved higher as did crappy debt, copper fell slightly.

Palladium and platinum provided the biggest surprises – both metals are in strong uptrends. These are mostly industrial/precious metals – does that mean we have some sort of industrial recovery happening? Not according to last month’s US Industrial Production numbers. And yet, prices are definitely moving higher.

There was talk of a new stimulus package; after taking a long vacation and doing nothing, Pelosi now says the House will stay in session until the deal is reached. What’s the reason for the U-turn? Apparently, a bipartisan group offered their own relief plan which seemed to split the difference; $1.5 trillion, with $500 billion in aid to the states/bailouts to pay for the cost of unnecessary lockdowns.

The FOMC is holding a meeting right now; this means that tomorrow we get a press conference from Powell at 2:30 pm. Will he say anything interesting? Perhaps he will say something about the new inflation targeting plan. Certainly the Fed isn’t increasing the balance sheet any more.

If that stimulus bill passes, I’d definitely expect to see more money printing. And most likely a rally in PM too.

Since DF is taking the day off, I figured I would give the update for today, Thursday, Sept 17th

My (JAG’s) forecaster said drama for this week. No drama to be seen. This week is a snoozer.


My upload failed.  I sent it to the staff to upload for me.  They have not yet done so.

(when the initial upload fails, all sorts of hell breaks loose – the spam defenses kick in, I can’t post anymore – its a PITA).

You really have no idea.  🙂

I have checked back for the update maybe 20x today. 🤫