Gold tried to rally in Asia but failed, then moved higher starting at 7am, topping out at 11:30, and then moving lower into the close. The long white candle was a low-percentage bearish reversal (28%), but forecaster climbed, rising into an uptrend. Gold is in an uptrend in the daily and monthly timeframes.

Gold/euros climbed +10.21 [+0.62%] to 1659.60 on moderately light volume. The long white candle was a possible bearish reversal (34%), but forecaster climbed, rising into an uptrend. Gold/euros is in an uptrend in the daily and weekly timeframes.

Gold ended the day above the 9 MA, which was a positive sign – this was true for Gold/Euros as well. OI increased, which suggested the banksters are piling in short. It feels to me that the break above the 9 in both currencies is a positive move. 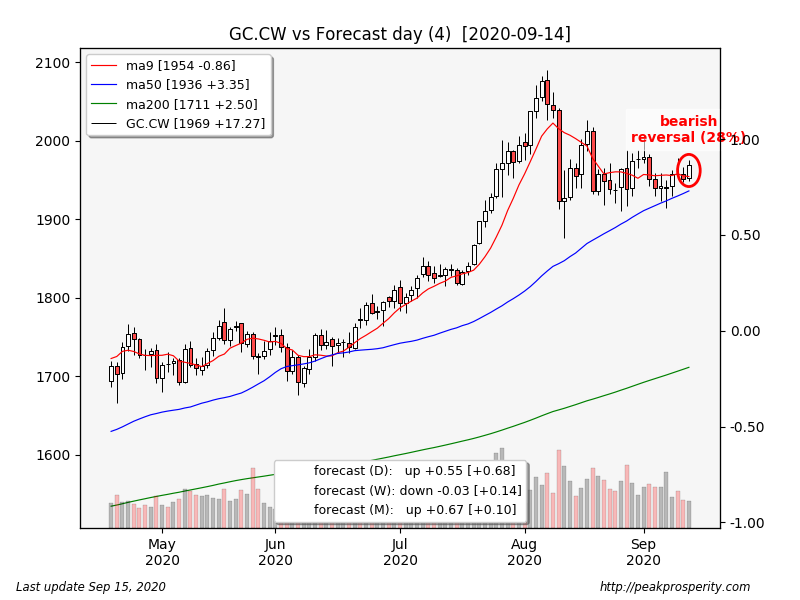 Silver rallied more steadily throughout the day, with most of the gains happening after 8 am. The short white candle was a possible bearish reversal (30%), but forecaster climbed, moving higher into its uptrend. Silver is in an uptrend in all three timeframes.

Silver also ended the day back above the 9; there was some shorting, but not all that much given today’s decent-sized move. Silver is starting to outperform again, which is also a positive sign. 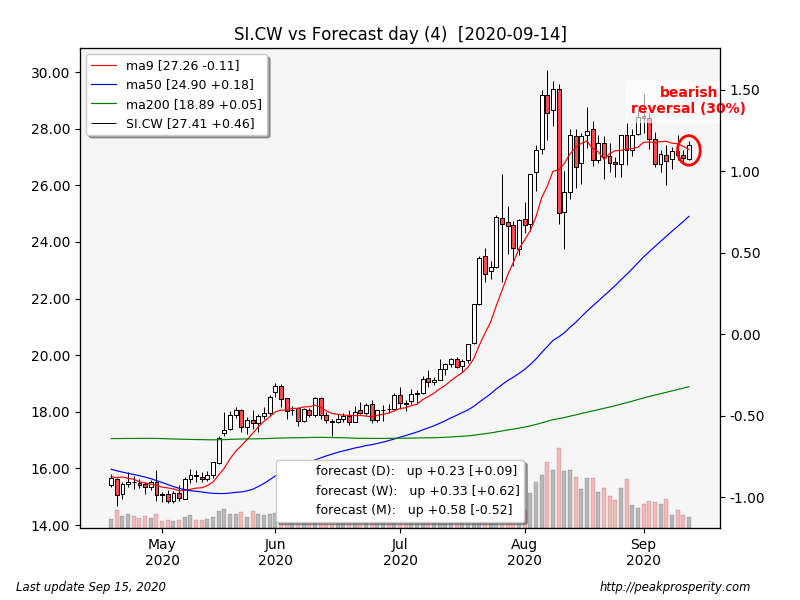 Miners gapped up at the open, rallied through mid-day, fell back slightly, then rallied into the close. GDX jumped higher, up +3.96% on moderate volume, and GDXJ screamed higher gaining +5.47% on moderately heavy volume. XAU rallied +4.03%, the white marubozu candle was a bullish continuation, forecaster climbed, rising into an uptrend. XAU is in an uptrend in all three timeframes.

As with gold and silver, the mining shares ended the day back above the 9 MA, which is a positive sign. Today’s close for the miners was the highest close since early August. The miners look quite strong. 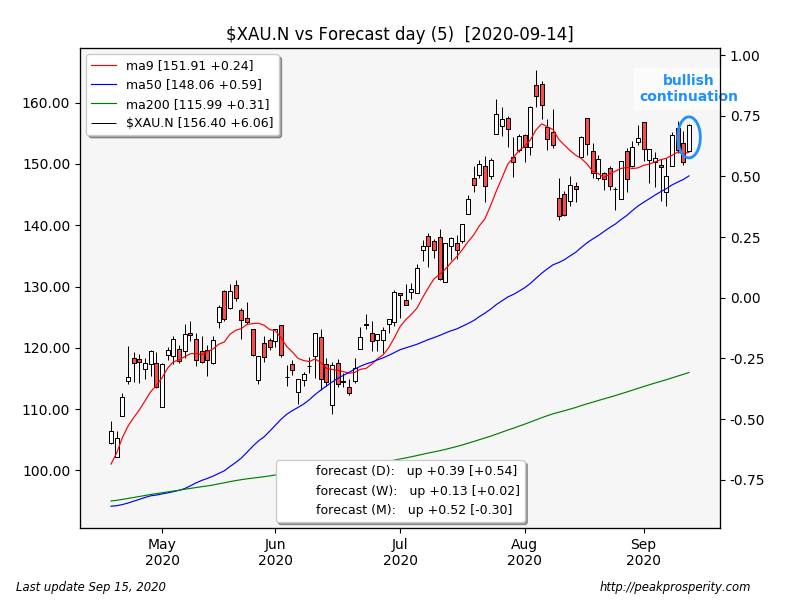 Platinum rose +30.66 [+3.16%], palladium fell -11.40 [-0.49%]. Platinum staged a strong rally today; this is also a one-month high. Platinum’s monthly uptrend has remained in place for 4 months, and looks quite strong, even though the shorter term trends have shown more back-and-forth.

Copper climbed +0.03 [+0.99%] to 3.06 on moderately light volume. The long white candle was a bullish continuation, forecaster climbed, moving higher into its uptrend. Copper is in an uptrend in the daily and weekly timeframes.

That’s not quite a new closing high for copper, but it is close. Copper is back in a short-term uptrend, although the trends are not particularly strong.

I still feel once the services open back up again more universally, spending for goods will tank, and copper will take a hit. 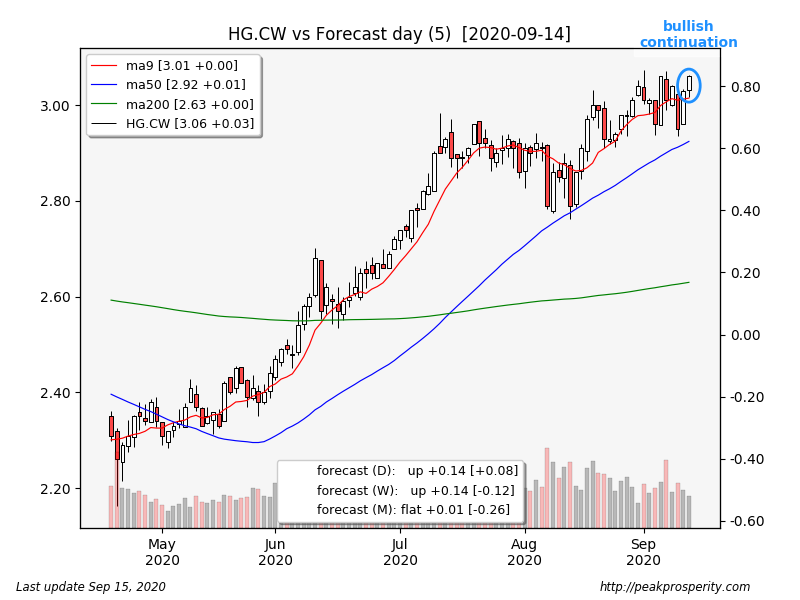 Forecaster didn’t like the plunge in the buck today; we are back in a downtrend. The buck ended the day just above the 9 MA. The bullish reversal of the dollar is turning out to be a long, long “process”, assuming it happens at all.

Note: dollar weakness doesn’t seem to be about money printing (which has largely stopped), or the prospects for more stimulus (which are off the table, at least for now), or about the virus (which is largely receding – while cases, but not deaths, are rising in Europe).

Dollar weakness is definitely aiding PM; while today’s rally in gold was partially a currency effect, mostly it was about gold moving higher apparently triggered by the rally in the Euro. 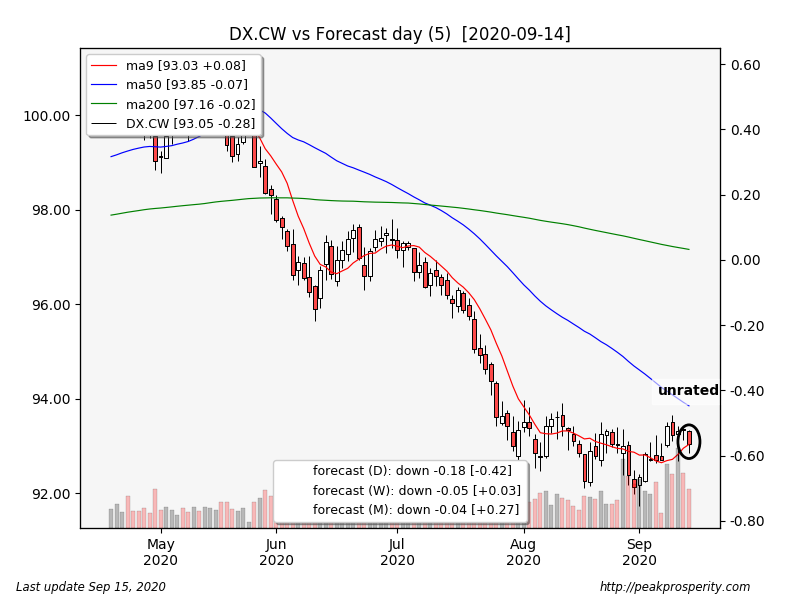 Crude fell -0.09 [-0.24%] to 37.51 on moderate volume. The spinning top/NR7 candle was unrated, forecaster climbed, but remains in a downtrend. Crude is in a downtrend in all three timeframes.

Not much happened today in crude. 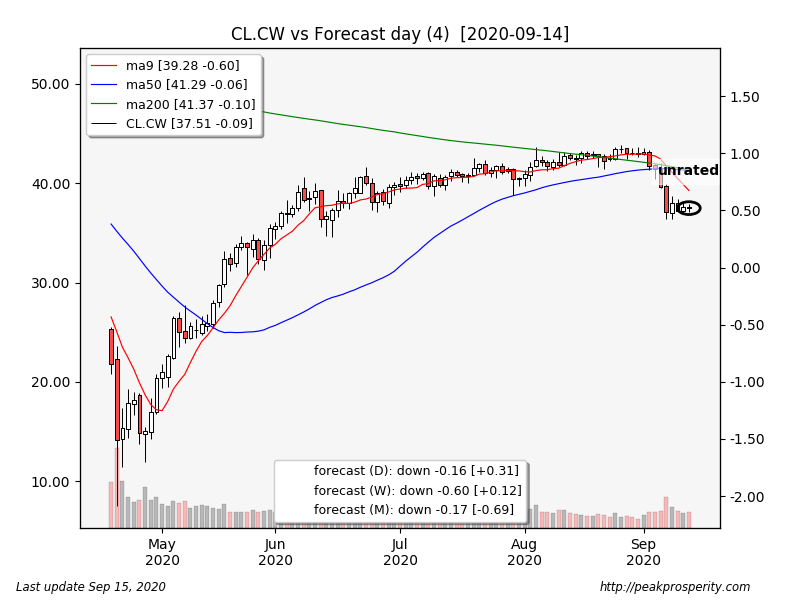 SPX printed a strong bullish reversal candle print today, and forecaster was positive too. It looks as though SPX has found support at the 50 MA. NYSE advance ratio was 81%, which said that this was a broad-based rally, not just a few big companies. 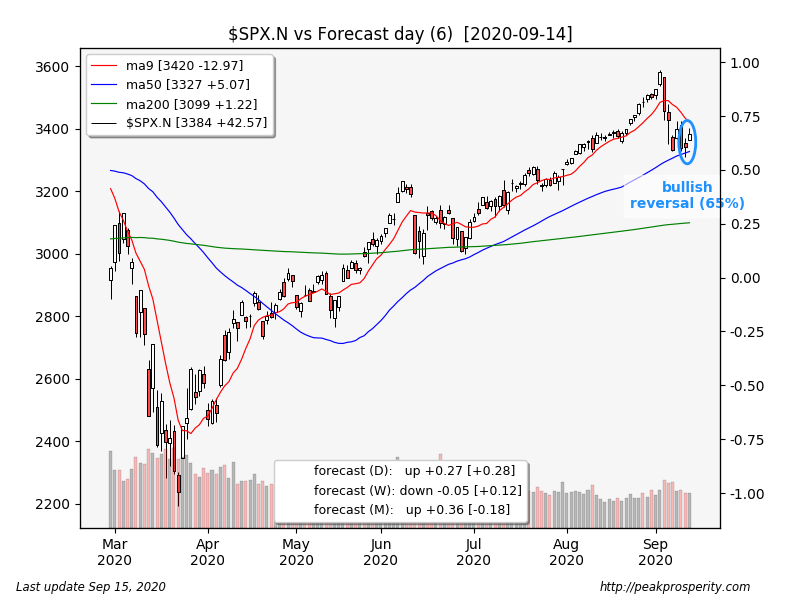 TLT climbed -0.01%. The short black candle was a bullish continuation, forecaster dropped, but remains in an uptrend. TLT is in an uptrend in the daily and weekly timeframes. The 30-Year yield fell -1.0 bp to +1.41%.

No data for TY today.

JNK fell -0.13%. The long black candle was a reasonably strong bearish reversal (43%), but forecaster climbed, rising into an uptrend. JNK is in an uptrend in the daily and weekly timeframes.

Interesting move by crappy debt; it doesn’t appear to be supporting the risk on case in equities. 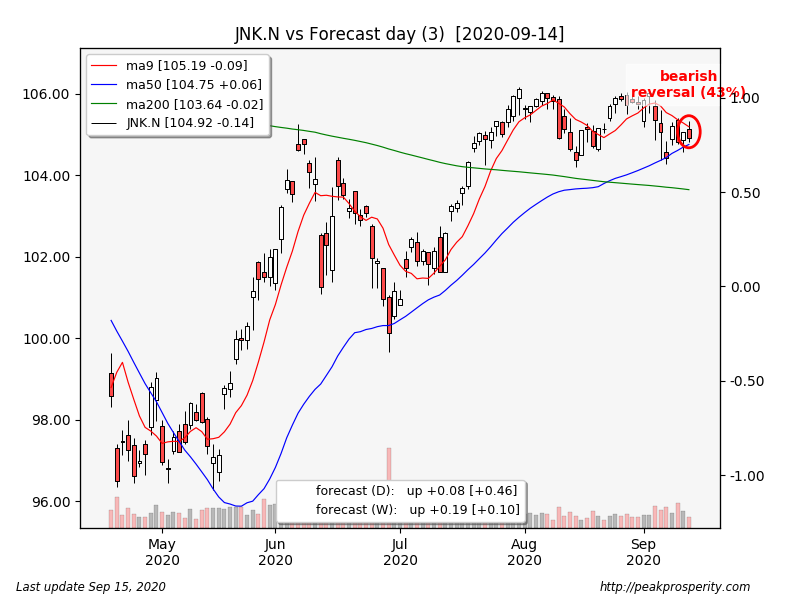 The GLD ETF tonnage on hand was unchanged at +0.00 tons, with 1248 tons remaining in inventory.

The metals had a pretty good day; the move higher seemed to be triggered by a rally in the Euro, at least in terms of timing anyway. Miners did especially well, especially the junior miners which jumped more than 5%. All items are back above the 9 MA, and all are back in uptrends.

Risk assets were more mixed; while SPX printed a strong swing low (although most of the gains came in the futures markets overnight) and copper moved higher, crude just chopped sideways, and crappy debt actually fell. Reminder: bounces in downtrends tend to be from 1-3 days long.

There really wasn’t all that much news that I saw today. Well, unless you count the tweet from Elon Musk talking about exciting battery news – TSLA stock ended the day up 12%. Maybe I should have held off on my put buy until after the news came out. TSLA does seem to be a “sell the news” sort of equity.

NYSE advance ratio was 81%, which said that this was a broad-based rally, not just a few big companies.

Yeah that is not good for my bearish case…