Gold shot higher at 8 am, topped out two hours later, then fell for the rest of the day into the close. The doji candle was a bullish continuation, forecaster dropped, but remains in an uptrend. Gold is in an uptrend in all three timeframes.

Gold/euros dropped -7.66 [-0.46%] to 1651.10 on moderately light volume. The doji candle was a possible bearish reversal (39%), but forecaster climbed, moving higher into its uptrend. Gold/euros is in a downtrend in both the weekly and monthly timeframes.

Gold staged a failed rally today, ending the day just below the 9 MA. The candle print for gold/USD was fine, but the gold/Euros print was much less fine – probably because gold/Euros looks a whole lot weaker overall, and today’s candle print had a pretty large upper shadow. The commercials also appeared to be piling in short, which definitely isn’t a good sign. Still, gold remains in an uptrend, at least for now. 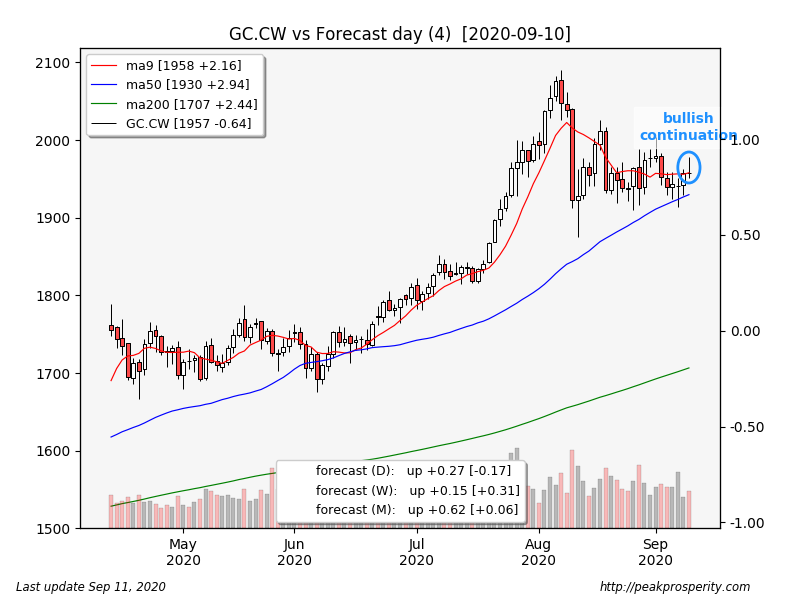 Silver jumped higher at 8:30 am along with gold, topped out at 9:15 am, then spent the rest of the day selling off. The spinning top candle was a possible bearish reversal (35%), but forecaster climbed, moving higher into its uptrend. Silver is in an uptrend in the daily and monthly timeframes.

Like gold, silver staged a failed rally today, ending the day back below the 9 MA. Commercials added to their shorts, but not all that enthusiastically. This certainly could be a lower high for silver, at least on the daily chart. 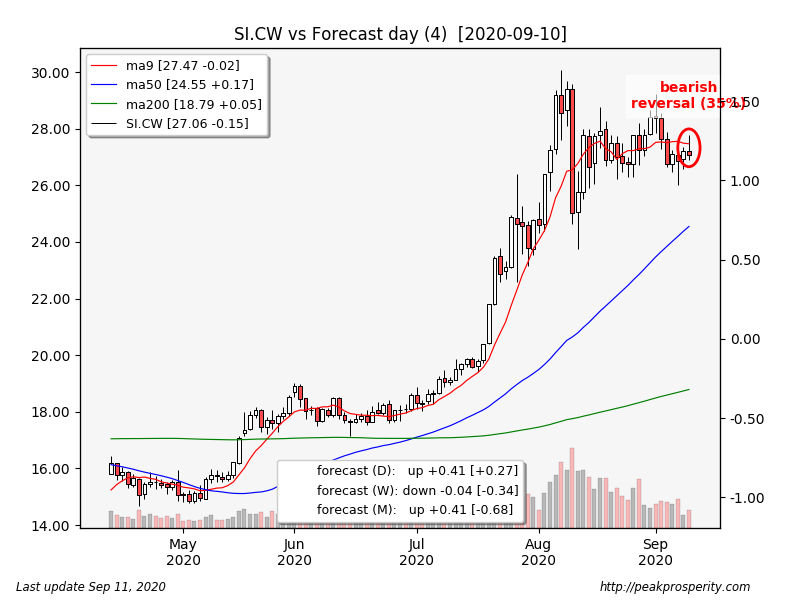 While the miners sold off today, they ended the day above the 9 MA; the chart for XAU looks better than for either gold or silver, and forecaster agrees – it remains in an uptrend in all 3 timeframes. 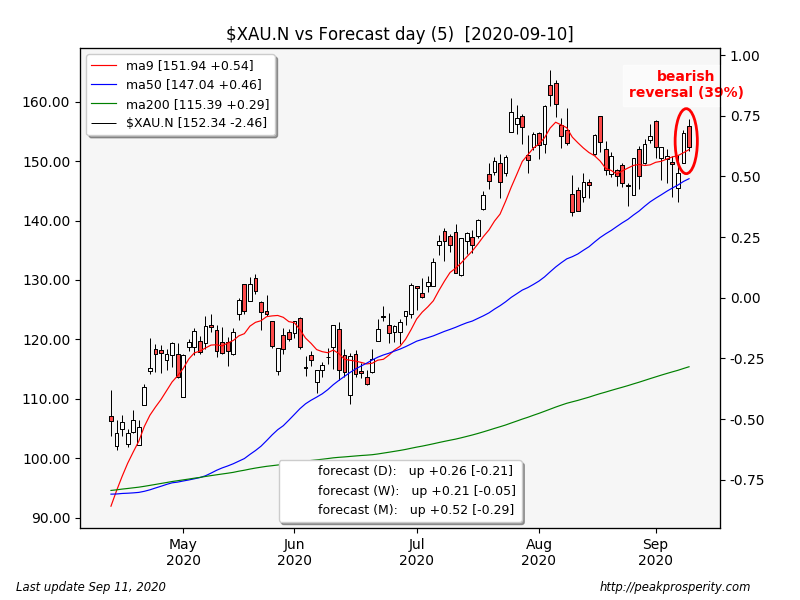 Copper plunged -0.09 [-2.96%] to 2.95 on moderate volume. The long black candle was a bearish continuation, forecaster fell, dropping into a downtrend. Copper is in a downtrend in both the daily and monthly timeframes.

Copper closed back below the MA9 – it sure looks like a bearish reversal to me. 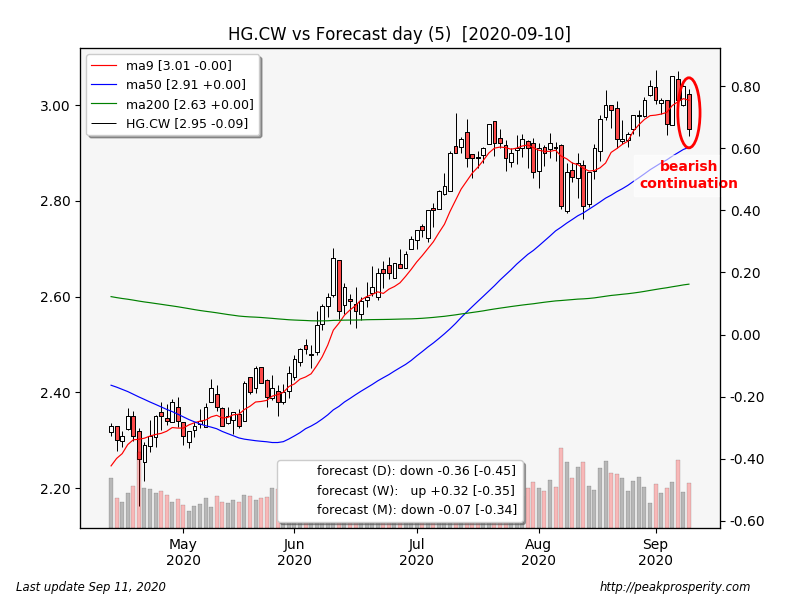 The buck inched up +0.07 [+0.08%] to 93.31 on extremely heavy volume. The long white candle was a probable bullish reversal (50%), but forecaster fell, dropping into a downtrend. The buck is in a downtrend in all three timeframes.

Signals were mixed today; candle print was quite bullish, but forecaster wasn’t happy. As of right now, the weekly candle pattern appears to be a (bullish) swing low, but we still have to wait until we see what happens on Friday.

The euro staged a failed rally today; EUR/USD rallied going into the ECB meeting, shot higher immediately afterwards, but then topped out at 9:45 am and fell through end of day, wiping out all the gains by the close. The buck of course had a mirror-image move – it was a buy-the-dip day for the buck.

There was no policy change at the ECB, but the tone (according to fxstreet) was more optimistic about the health of the EU economy, and there were hints of an increase in inflation – which I guess is a good thing for central bankers these days. Headline reads: “ECB more confident that the worst has passed.” 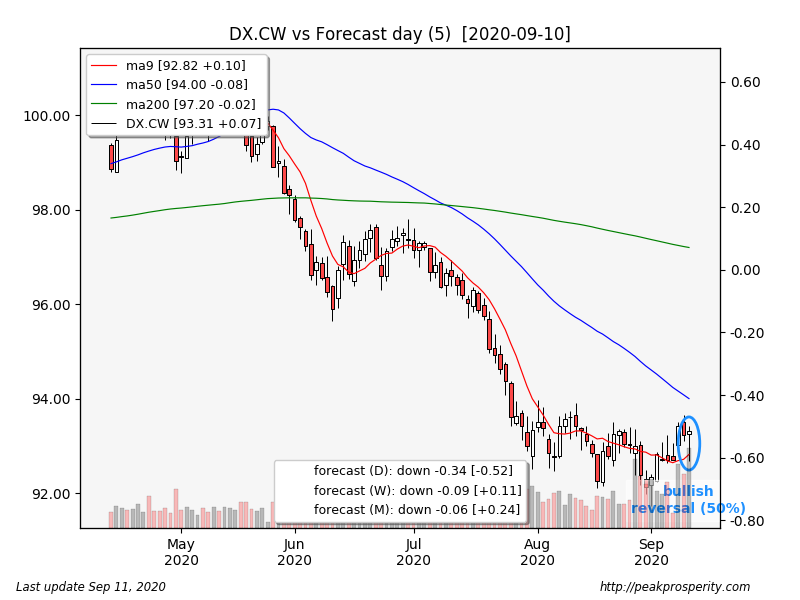 Crude fell -0.79 [-2.08%] to 37.25 on moderately heavy volume. The long black candle was unrated, forecaster climbed, but remains in a downtrend. Crude is in a downtrend in all three timeframes. 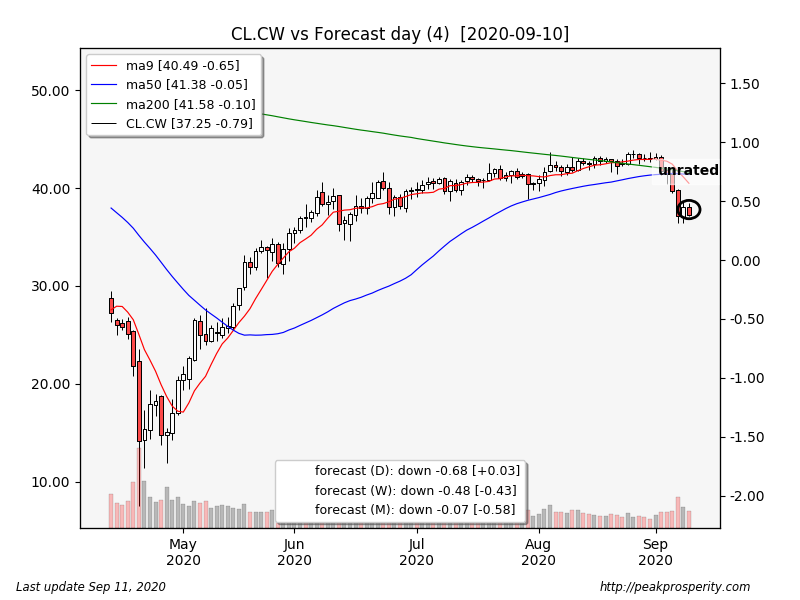 SPX plunged -59.77 [-1.76%] to 3339.19 on moderate volume. The bearish engulfing candle was a probable bearish reversal (50%), forecaster dropped, moving deeper into its downtrend. SPX is in a downtrend in both the daily and weekly timeframes.

Today was an ugly bearish engulfing, and forecaster remains in a downtrend. SPX appears to be headed lower. Yesterday’s bounce appears to be over. 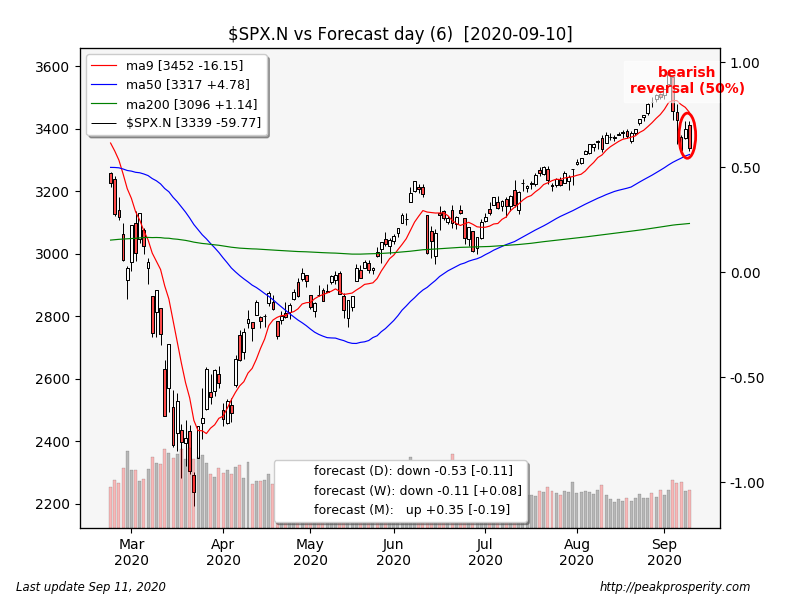 TLT climbed +0.51%. The bullish engulfing candle was neutral, forecaster climbed, rising into an uptrend. TLT is in an uptrend in the weekly timeframe. The 30-Year yield fell -3.0 bp to +1.42%.

TY climbed +0.11%. The long white candle was a bearish continuation, forecaster climbed, rising into an uptrend. TY is in an uptrend in the daily timeframe. The 10-Year yield fell -3.0 bp to +0.68%.

Bonds are moving slowly higher. No real signal from bonds.

JNK dropped -0.37%. The bearish engulfing candle was a possible bearish reversal (39%), forecaster dropped, moving deeper into its downtrend. JNK is in an uptrend in the weekly timeframe.

Crappy debt also reversed today, but it seems to be doing better than equities. 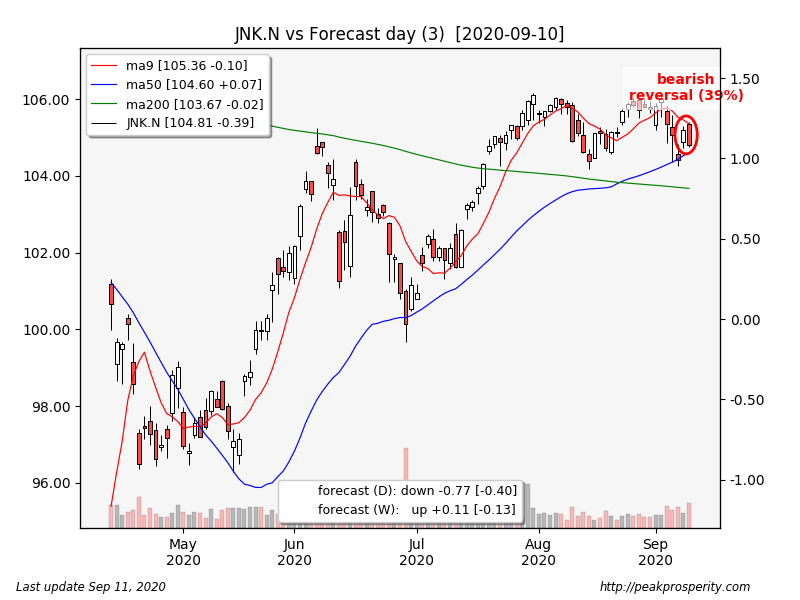 The GLD ETF tonnage on hand was unchanged at +0.00 tons, with 1253 tons remaining in inventory.

Discounts remain fairly high on the physical ETFs, and premiums are shrinking on the big bars.

Producer Prices: headline +0.57% m/m. The PPI has recovered maybe 60% from the pre-pandemic levels; producer prices are also an inflation metric.

Currencies once again were the dog, and PM was the tail that got wagged. Today the buck was driven by the ECB, which was mildly optimistic about the EU economy – at least more so than expected. The ECB also hinted about a pickup in inflation, which seems to be the not-so-secret goal of every central banker these days.

So gold rallied, then fell, as did silver and the mining shares. Based on OI changes, the banksters look a bit more confident now about jumping in short; that would seem to point to lower prices for the metals prices in the near term. Then again, miners appear strongest, and since they tend to be the “risk on signal” for the metals, that’s a positive sign. So – mixed signals right now from PM.

Signals are clearer for risk assets: copper was hit hard, crude sold off too, so did crappy debt, and so did equities – complete with a bearish sector map. It is unanimous – this is definitely a risk off mood.

Will it continue? Well, my guess is yes – since all sectors are pretty much in agreement right now.

How a decline in risk assets will affect PM right now is anyone’s guess. The usual thing is for gold to do well, right up until the selling gets really violent. Will that happen this time?

There isn’t that much overhang of managed money longs right now. There are some silver longs to be rinsed out, but not nearly as many as there were at the start of the pandemic. Likewise, the commercial short position is quite low, which says the commercials aren’t going to make big bucks off a decline. This isn’t a classic setup for a decline – or even a forced selling scenario with margin calls.

So maybe we believe the miners. They still look strong.

I’ll leave you with this fantastic article, brought to you by “someone”. The headline suggests a possible 5-10% drop in TSLA if a negative “herd mentality” prompts “massive selling.” (What a bunch of stupid cows the sellers would be.). Most people just read headlines. “Oh, just a 5% drop.”

But inside the article, more than halfway down, the analyst being quoted suggests that the next buy point is – at a minimum – 33% lower. And probably more like 50%.

You must have missed the gentleman’s name who said the above quote. He works for the online trading platform “Ticker Tocker”. He’s their “Chief market strategist”. He’s also their “Co-Founder”.

I wonder how much money they make selling the tape to wall-street firms so they can front run the “Ticker Tocker” clients?

Sounds like someone started a company playing off the well known Chinese spyware APP TikTok and is now making headlines.

Nothing more needed to see here, is this another sign of a bubble top?

I haven’t been over there much recently, but doesn’t Wolf Richter always warn against going short TSLA, no matter how crazy it’s chart gets? He’s been right on that one up until now, but maybe he also changed his tune…

I must confess, I missed the significance of the Ticker Tocker company name, although it did impinge on my consciousness briefly as “that’s an odd name”.  🙂

My vague sense is that there is a metric crap-ton of games being played with the TSLA stock price.   Why?  To what end?  Musk is clearly the darling of someone very powerful.  He can tweet madly and manipulate his stock price, and the SEC gives him a pass.  TSLA needs cash?  Stock price magically doubles (on a 5:1 split!), he issues a secondary – enough to almost pay off all his corporate debt – stock tumbles again.

My main focus was the “headline spin” game being played, not the shilling going on underneath the covers – which is yet another game too.  “How to turn a projected 50% downturn into a 5% blip, and make people feel like cows in a herd if they sell.”

It is in someone’s interest to keep Musk and TSLA aloft.  Who they are, and to what end, I don’t know.

I felt the same way about shale a few years back.  Shale felt like an act of national policy, papered over with a bunch of market hooey.  Shale was a way for the US to drop the price of global oil by about 50%, with a relatively small cash investment.  If you ran the “global order”, throwing a few hundred billion away on US shale (thus dropping the price of the marginal barrel by 50% for 5 years), well it was the deal of the century.

I mean, if I ran the global order, and I could orchestrate this, I’d consider this a huge victory.  All those oil exporters lose, and the major industrialized nations all win.