Gold moved sideways-to-down until about 7:30 am, when it moved sharply higher, eventually ending the day near the highs. The swing low candle was a reasonably strong bullish reversal (47%), forecaster climbed, moving higher into its uptrend. Gold is in an uptrend in all three timeframes.

Gold/euros rallied +12.62 [+0.77%] to 1658.76 on moderately light volume. The swing low2 candle was neutral, forecaster climbed, moving higher into its uptrend. Gold/euros is in a downtrend in both the weekly and monthly timeframes.

It was a reasonably strong candle pattern, and gold ended the day back above the 9 MA. Gold is now back in an uptrend in all 3 timeframes, which is positive as well. Gold/Euros is struggling a bit more. Commercials appear to be adding to their short positions again today. Gold has yet to break out of its rough triangle pattern, but things do look better today than they did yesterday. 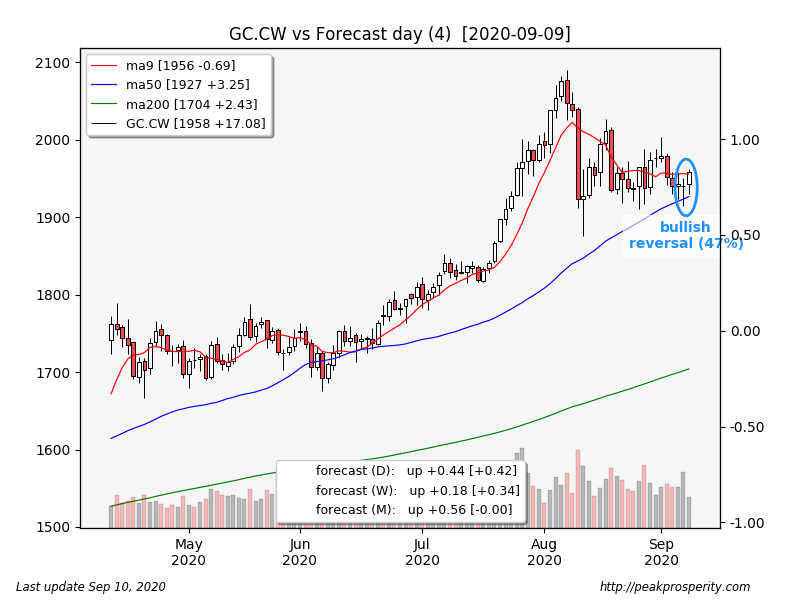 Silver rallied +0.35 [+1.30%] to 27.21 on light volume. The short white/NR7 candle was unrated, and forecaster dropped, but remains in an uptrend. Silver is in an uptrend in the daily and monthly timeframes.

No swing low for silver, no short-covering, near-term trends remain weak, and silver remains below the 9 MA. 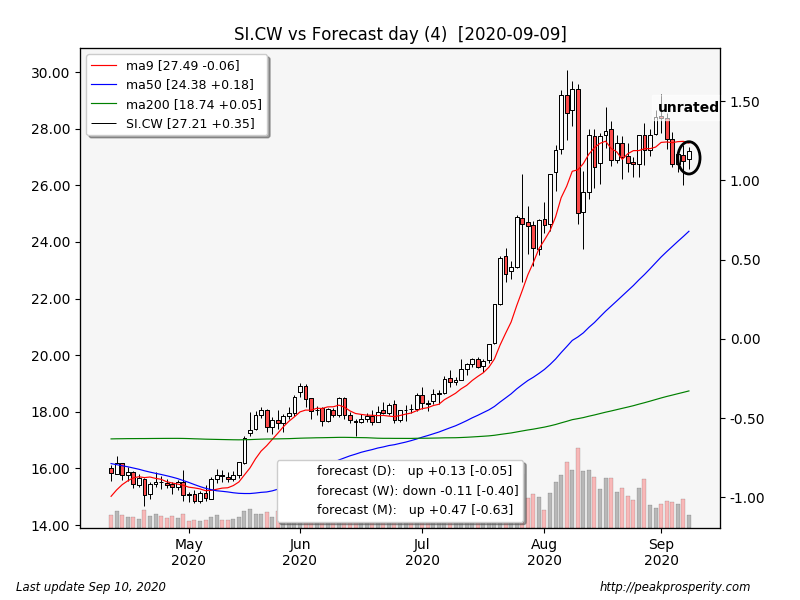 The miners gapped up slightly at the open, and spent the whole day moving higher, ending near the highs. GDX jumped +4.34% on moderate volume, and GDXJ climbed +4.58% on moderate volume. XAU moved up +4.61%, the swing low candle print was neutral, but forecaster climbed, rising into an uptrend. XAU is in an uptrend in all three timeframes.

Well the candle print wasn’t so strong, but the forecaster sure liked today’s big rally. XAU ended the day back above the 9 MA, and it also closed at a one-month high. Perhaps the miners were aided by the strong rally in equities. 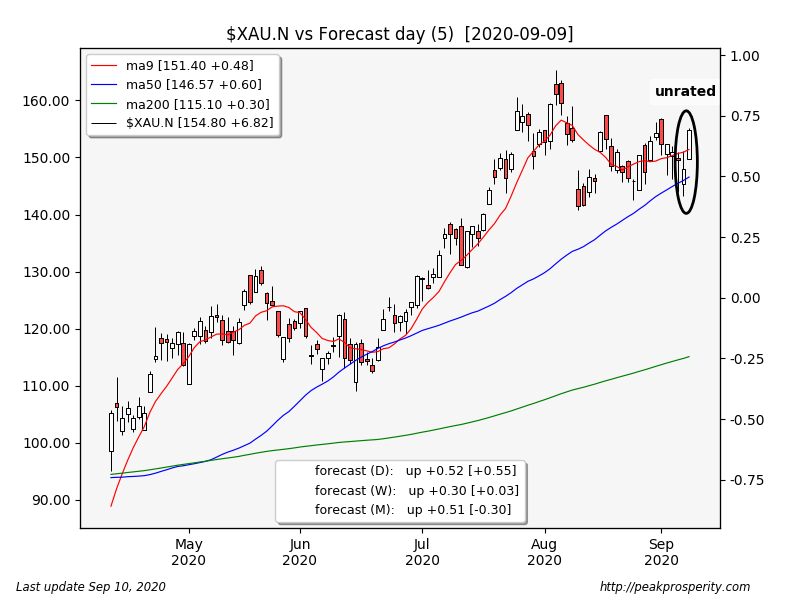 Platinum rose +21.23 [+2.28%], and palladium rose +21.28 [+0.92%]. This pulled platinum back into an uptrend, and it also ended the day back above the 9 MA. While the daily doesn’t look so good, platinum’s longer term charts look a bit better; it is back in an uptrend in all timeframes now. Palladium looks substantially better.

Copper climbed +0.03 [+1.00%] to 3.04 on moderately light volume. The long white candle was unrated, forecaster climbed, moving higher into its uptrend. Copper is in an uptrend in the daily and weekly timeframes.

Near term copper appears to be struggling, but it remains near the highs. It is hard to say where it goes next. 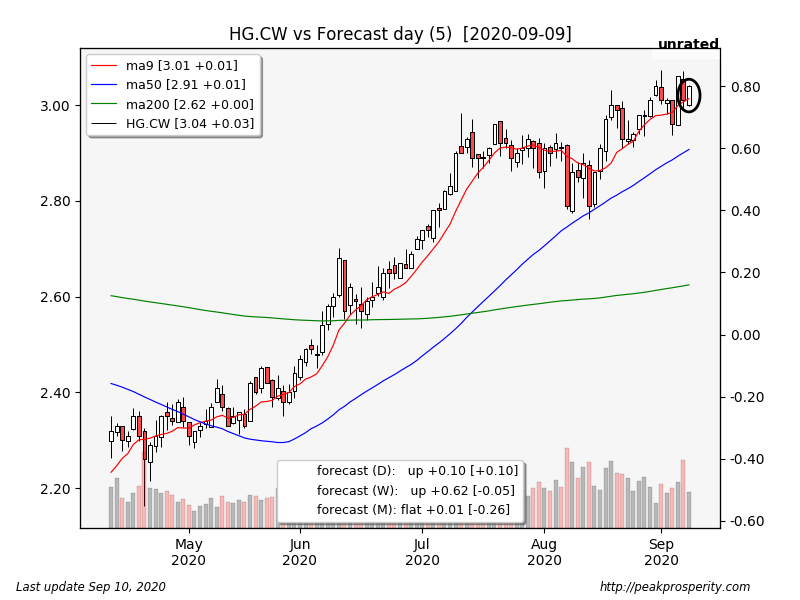 The buck fell -0.18 [-0.19%] to 93.24 on heavy volume. The long black candle was a bullish continuation, forecaster dropped, but remains in an uptrend. The buck is in a downtrend in both the weekly and monthly timeframes.

The buck remains in a daily uptrend, although the trend weakened significantly today. Trends overall for the buck remain quite weak. 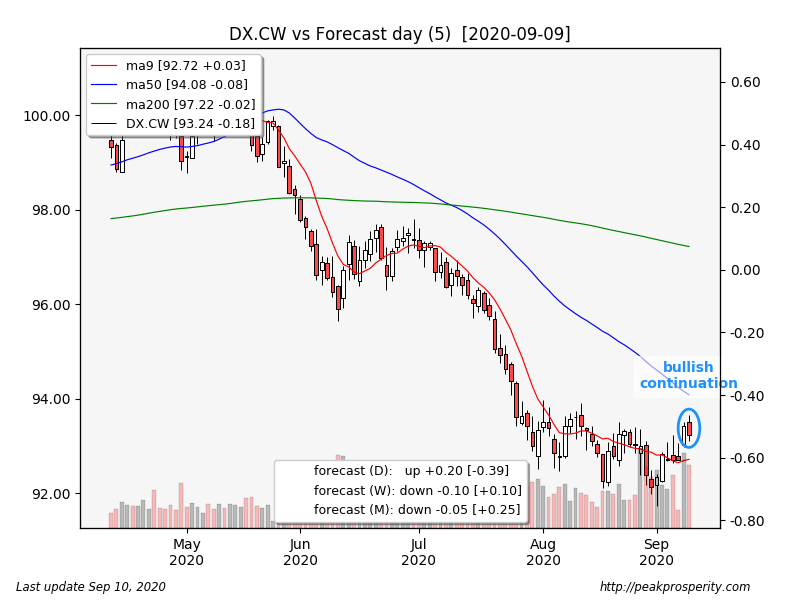 Crude rallied +0.91 [+2.45%] to 38.04 on heavy volume. The long white candle was a possible bullish reversal (38%), forecaster climbed, but remains in a downtrend. Crude is in a downtrend in all three timeframes.

Crude’s bounce today managed to recapture a small fraction of what it lost yesterday; is this a bullish reversal? Its too soon to tell. 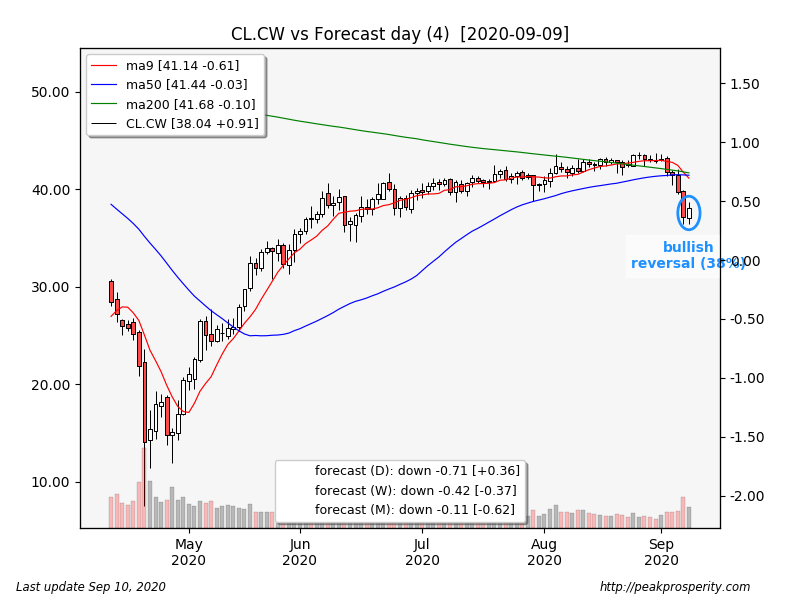 SPX shot up +67.12 [+2.01%] to 3398.96 on moderate volume. The swing low2 candle was neutral, forecaster climbed, but remains in a downtrend. SPX is in an uptrend in the weekly and monthly timeframes.

The swing low print was weak; it was not a bullish reversal for SPX. Turnaround Tuesday looks like it is a thing, but its not clear if this particular bounce will have legs. 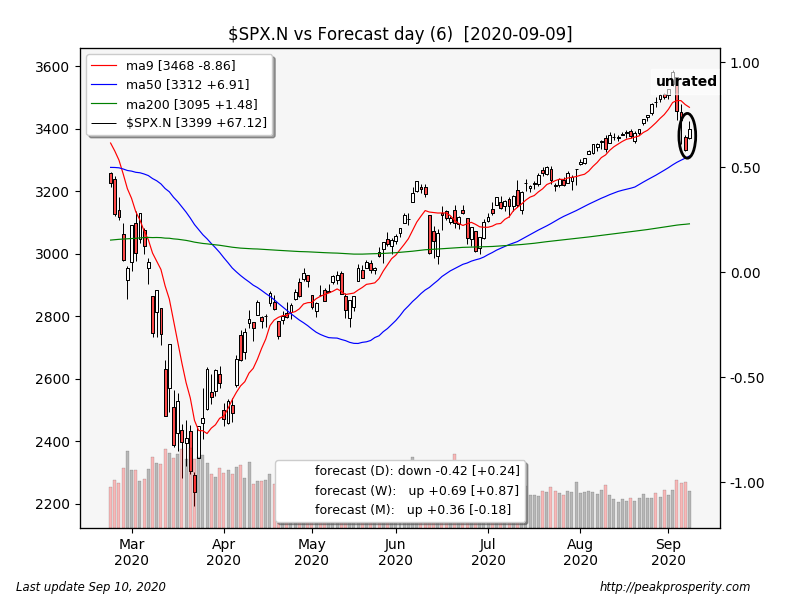 TY rose +0.16%. The unknown candle was unrated, forecaster climbed, rising into an uptrend. TY is in a downtrend in both the weekly and monthly timeframes. The 10-Year yield rose +1.0 bp to +0.70%.

Bonds really aren’t doing much of anything.

JNK climbed +0.75%. The confirmed bullish spinning top candle was a likely bullish reversal (62%), forecaster dropped, moving deeper into its downtrend. JNK is in an uptrend in the weekly timeframe.

This was a strong bounce for crappy debt – certainly stronger-looking on the chart than what we saw for equities. Call it risk on. 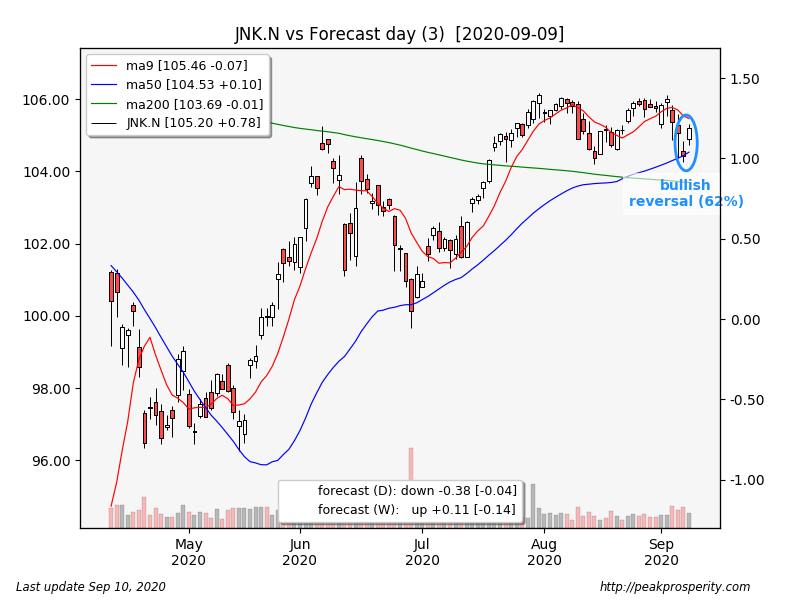 The GLD ETF tonnage on hand climbed +2.92 tons, with 1253 tons remaining in inventory.

Gold’s rally today happened at roughly the same time as the plunge in the buck; gold’s move was much stronger than the currency moves, but the timing of both moves were definitely aligned.

Today the miners performed best, followed by gold, and then silver – by the numbers silver looked stronger than gold, but if you look at the charts, silver’s move was pretty anemic. I’m not sure what has happened with silver, but it seems to be lagging at this point. No short-covering, certainly. I keep harping on that because I think it is important – perhaps even decisive.

The miners looked very strong today; I suspect that might have been helped along by the overall equity market rally.

Turnaround Tuesday turned out to be a thing; equities moved higher, although at least half of the move came in the futures markets overnight. Crappy debt, crude, and copper all supported the risk on mood. Will it last? Forecaster is still in a downtrend, and the candle print was weak. “Things don’t go to heck in a straight line.”  Most likely this is just a bounce in a longer downtrend.

There was news today about the flock of vaccines being produced around the world; manufacturers all agreed that they wouldn’t rush their vaccines into production without sufficient testing. Note that Trump wanted the vaccines to be available by Election Day. That’s not going to happen.

So what’s hot and what’s not?

As Clinton (Bill, not Hillary) once said, “its the economy, stupid.”