Gold continued dropping in Asia, making a new low to 1874, bounced back, then mostly chopped sideways through end of day, although it drifted lower into the close. The long legged doji candle was a bearish continuation, forecaster climbed, but remains in a downtrend. Gold is in an uptrend in the weekly and monthly timeframes.

Gold/euros was unchanged to 1634.88 on heavy volume. The southern doji candle was a reasonably strong bullish reversal (45%), forecaster climbed, but remains in a downtrend. Gold/euros is in a downtrend in all three timeframes.

While gold/USD’s candle print was not a reversal, gold/Euros did print a reasonably strong reversal pattern; the normally boring doji was actually one of the highly rated ones. However, forecaster has yet to be convinced. Buyers definitely did appear once gold dropped below 1900 intraday; perhaps that is the real support level for gold at the moment. One issue: not much short-covering right now. That’s not so bullish. 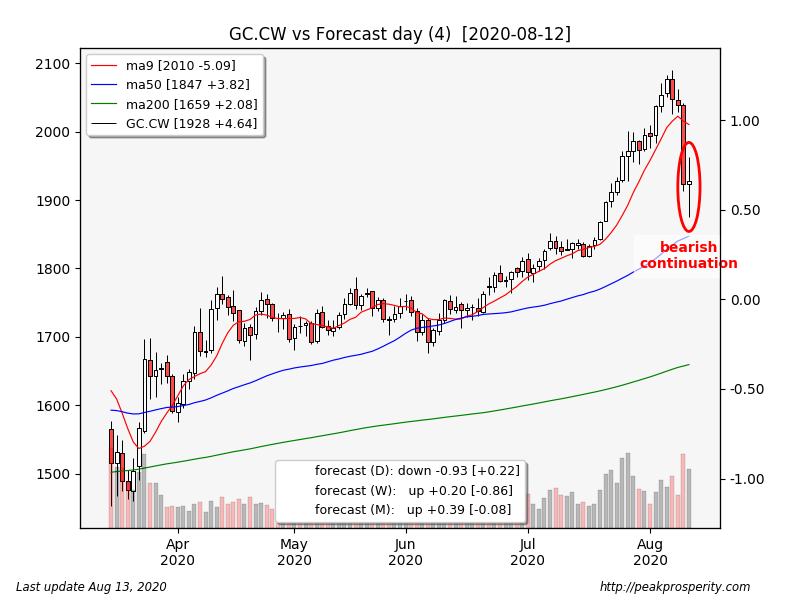 Silver continued to plunge in Asia, making a new low to 23.58, but then rallied back more than $2 by the close. The spinning top candle was a reasonably strong bullish reversal (40%), forecaster climbed, but remains in a downtrend. Silver is in an uptrend in the weekly and monthly timeframes.

Silver’s candle print was a highly rated single candle reversal bar; intraday, buyers appeared fairly rapidly after the low. There was a modest amount of short-covering. Is this the low? Maybe. It looks to have more support than gold. 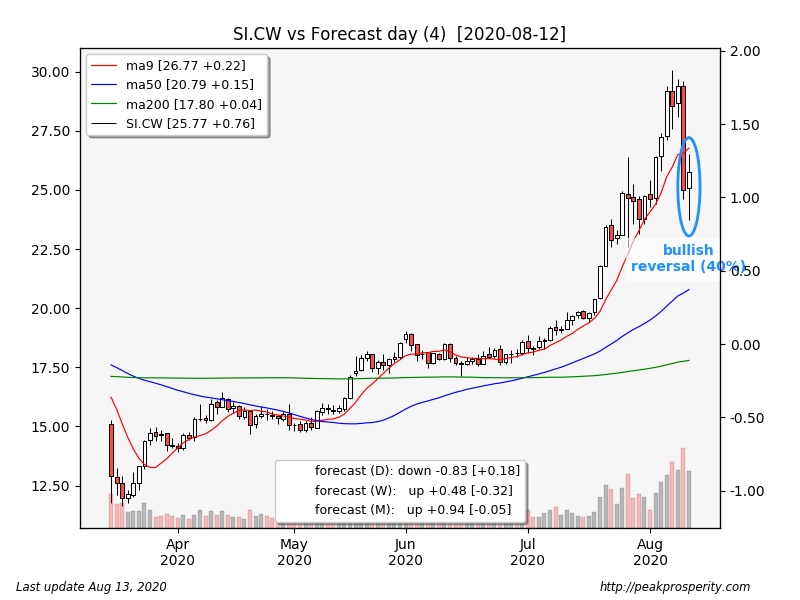 Miners gapped up at the open, chopped sideways for much of the day, then sold off into the close. GDX rose +0.46% on moderate volume, and GDXJ moved up +1.16% on moderately heavy volume. XAU climbed +0.15%, the long black/NR7 candle was unrated, forecaster climbed, but remains in a downtrend. XAU remains is in a downtrend in both the daily and weekly timeframes.

No bullish reversal yet for the mining shares – but no new low either. Shorter term trends remain bearish. 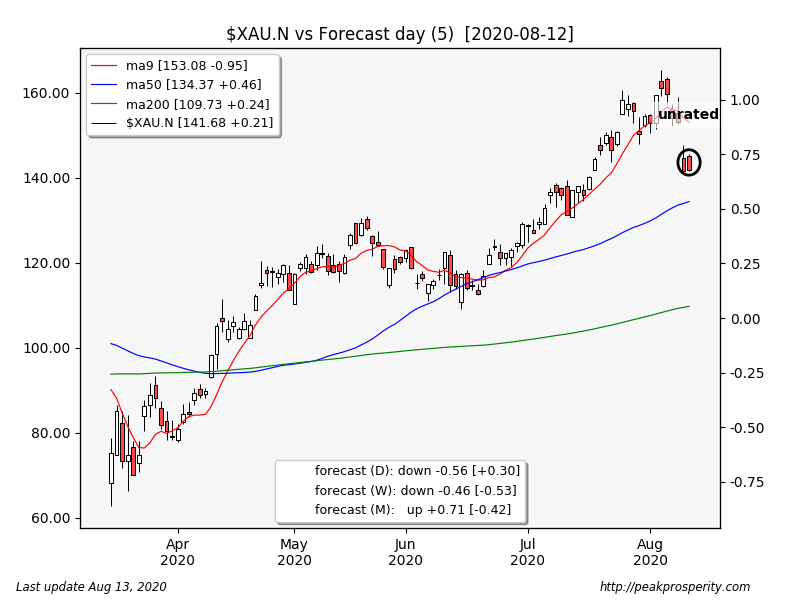 Copper rallied +0.03 [+1.05%] to 2.88 on heavy volume. The spinning top candle was a bullish continuation, forecaster climbed, rising into an uptrend. Copper is in an uptrend in all three timeframes.

Copper rallied back up to the 9 MA today, and it is back in a daily uptrend. 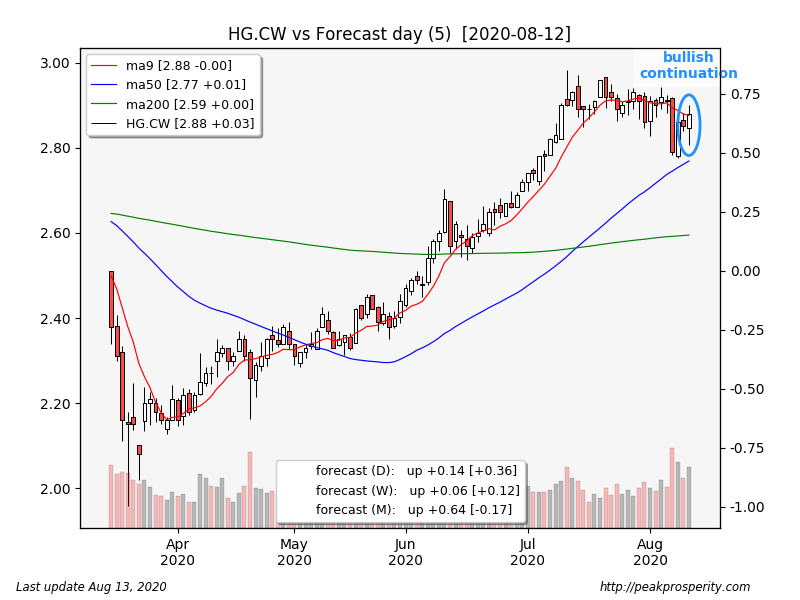 The buck fell -0.19 [-0.20%] to 93.42 on moderate volume. The long black candle was a reasonably strong bearish reversal (43%), forecaster dropped, falling into a state of no-trend. The buck is in a downtrend in both the weekly and monthly timeframes.

Is this it for the brief dollar rally? Longer term downtrend remains in place. 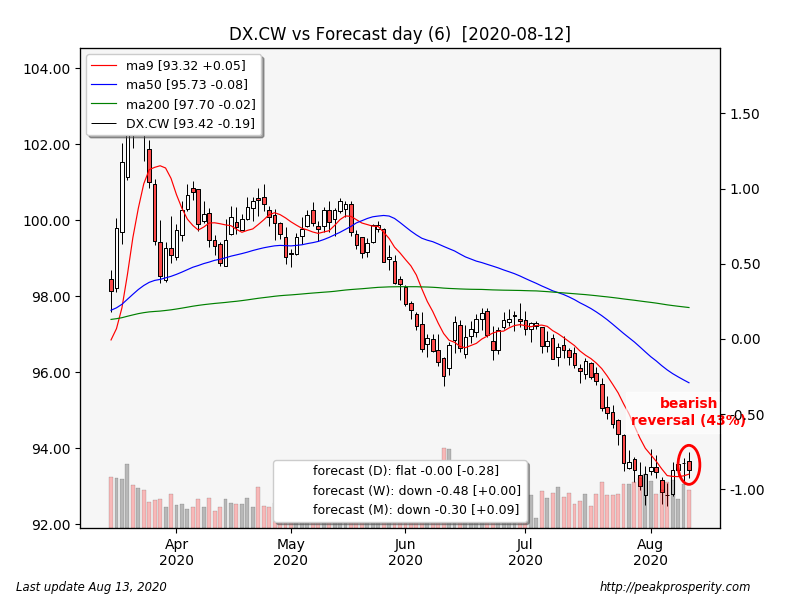 Crude shot up +0.96 [+2.30%] to 42.78 on moderately heavy volume. The long white candle was a bullish continuation, and forecaster climbed, rising into an uptrend. Crude is in an uptrend in the daily and monthly timeframes.

I rebuilt my monthly crude model to increase the influence of cycle timing (inspired by Armstrong), and to decrease influence of other inputs, and the monthly is now in an uptrend – although the strength of the trend is weakening. The cycle timing inputs are interesting; there really does seem to be an underlying order to the markets. And maybe the universe too. Of course we’ll only know if it ends up working going forward. 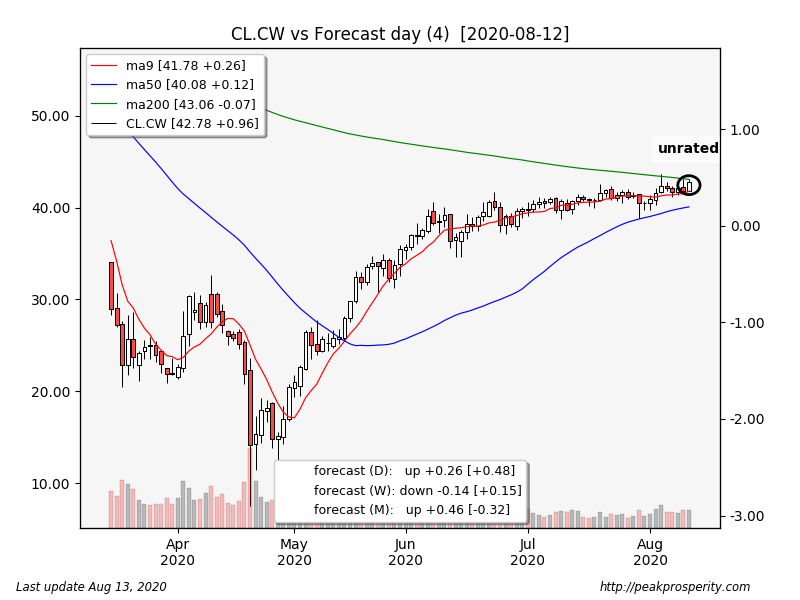 SPX rallied +46.66 [+1.40%] to 3380.35 on moderate volume. The opening white marubozu candle was a bullish continuation, forecaster climbed, moving higher into its uptrend. SPX is in an uptrend in all three timeframes.

It was a strong day for SPX; the all time high is 8 points away. NYSE advance ratio: 63%, which is bullish, but not nearly as strong as the big rally we saw today. That hints at a lack of market breadth, which is somewhat bearish. 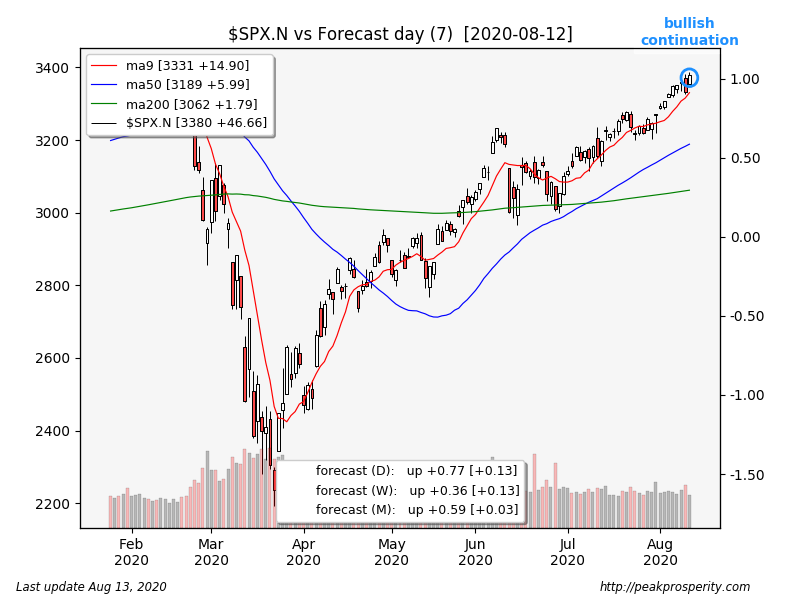 TLT fell -0.91%. The high wave candle was a reasonably strong bullish reversal (49%), forecaster climbed, but remains in a downtrend. TLT is in a downtrend in both the daily and weekly timeframes. The 30-Year yield rose +6.0 bp to +1.38%.

TY dropped -0.20%. The long black candle was a bearish continuation, forecaster dropped, moving deeper into its downtrend. TY is in a downtrend in both the daily and monthly timeframes. The 10-Year yield rose +4.0 bp to +0.68%.

Hmm. This bond correction is now beginning to be a thing. The 10-year futures have dropped below the 50 MA for the first time in several months. 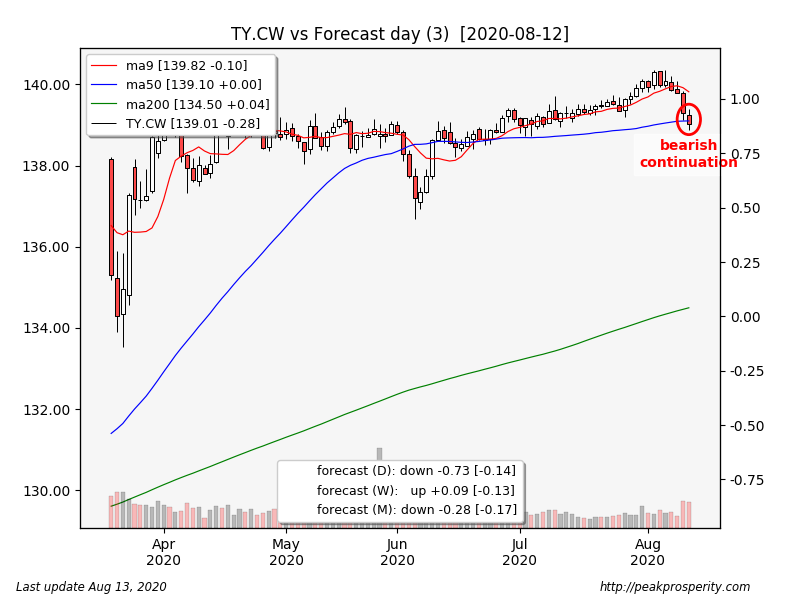 JNK inched up +0.21%. The unknown candle was unrated, forecaster climbed, but remains in a downtrend. JNK is in an uptrend in the weekly timeframe.

It was a very modest rally for crappy debt, especially given the loss it sustained yesterday. JNK is looking much weaker than equities. This feels like risk off to me. 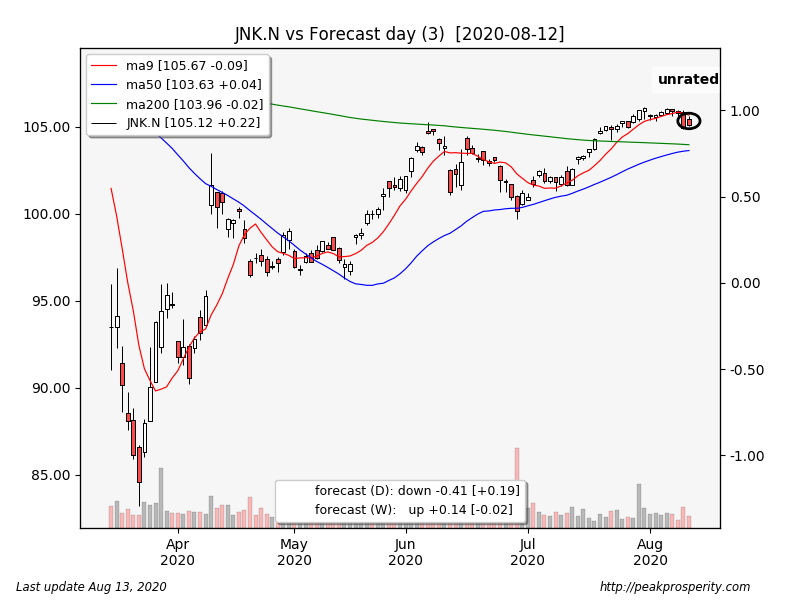 The GLD ETF tonnage on hand dropped -7.30 tons, with 1251 tons remaining in inventory.

Physical ETF discounts have expanded, and premiums for metal shrank – but remain in place.

Silver may have put in a low today; this is less certain for gold and the mining shares. I’m a little concerned at the lack of short-covering, and the decline in physical premiums we are seeing; the plunge has definitely given PM buyers some pause here.

SPX looks to be on its way to make a new all time high in the very near future. Crude is supporting this move, copper is perhaps neutral, while crappy debt looks really weak.

Bonds have awoken from their months-long slumber and have started to briskly sell off; just last week we made a new all time low for the 10 year yield: 0.52%. Today, it was at 0.68%, which is a fairly large move. The 30-year has moved even more dramatically; TLT is now in a reasonably strong downtrend.

The corona virus stimulus negotiations have once again failed; Pelosi is unwilling to just extend the current programs. She really wants that money for her broke states, which have become even more broke due to more extended lockdowns. (Surprise: sales tax revenues fall off a cliff when businesses are forcibly closed). I would have expected the impasse to be good for the buck, but it doesn’t seem to have turned out that way.

Cases in the US continue to move slowly lower; they are down 21% from the highs set in mid-July.

There are still lots of balls in the air, too many for me to keep track of right now. Defaults, Europe and their massive GDP losses (latest-UK: -23.4% drop vs Q4 2019!!), German court decisions, ECB…

Here’s a fun one for you China-watchers: there are rumbles within the PLA of dissent – important people appear dissatisfied with the use of “Wolf Warrior” diplomacy – as it seems to be a tactic that is backfiring almost everywhere. From the outside, China looks monolithic, but apparently the reality on the ground is quite different.

Apologies for big gaps in my postings.  My Dad is now in palliative care and all this takes a very big back seat (cancer not COVID).  I’d rather wish I had the insight to say a decade ago “Dad, have you had your PSA test?” Vs “PMs will pull back next week”.

Jmone, sending good thoughts your way. I hope you can find a little joy in all this.

My mom (and my family too) went through a similar experience 6 years back – cancer, palliative care.  It takes all of your time and attention for sure.  However, upon reflecting on the experience, if someone is going to leave – and we all have to go someday – it is nice to have some time to say good bye.  For us it was about three months.  Everyone has time to adjust.

My two cents: try CBD as a painkiller, rather than morphine.  Your patient is still conscious and able to function, although a bit dreamy.

My grandfather passed away from a heart attack while square dancing.  My grandmother was not amused at all.  I think I understand why now.  My stepfather also passed away suddenly – and Mom was upset about that too.  Neither of them had a chance to say goodbye to their husbands.

So – glass half full.

Jmone, this is going to sound ridiculous but has your father tried tomato sauce or juice for his prostate cancer? Believe it or not, there is quite a bit of good research showing that it can be very helpful in all stages of the disease. Here is a video that discusses some of the research:

My own father has been battling this monster for years. I wish you all the best in your family’s fight against it.

The recent selloff in bonds has me thinking that September might not be as bad as we have feared. It might not be good for mega-tech stocks that have lead the market this year, but small cap equities might do better with bonds selling off.

At some point, a bond selloff would crash the stock market, but this one looks like it is just starting

I found an interesting tidbit about utilities and the VIX. It seams that 83% of the biggest spikes in the VIX were proceeded by a run up in the utility stocks. I remember seeing the utility stocks outperform at the beginning of the year, before the crash and spike in the VIX.

Can you use your graphical skills to see if there is any truth to this observation?

Well, it happened once.  I ran DJU/SPX through an MA5 to smooth it out. 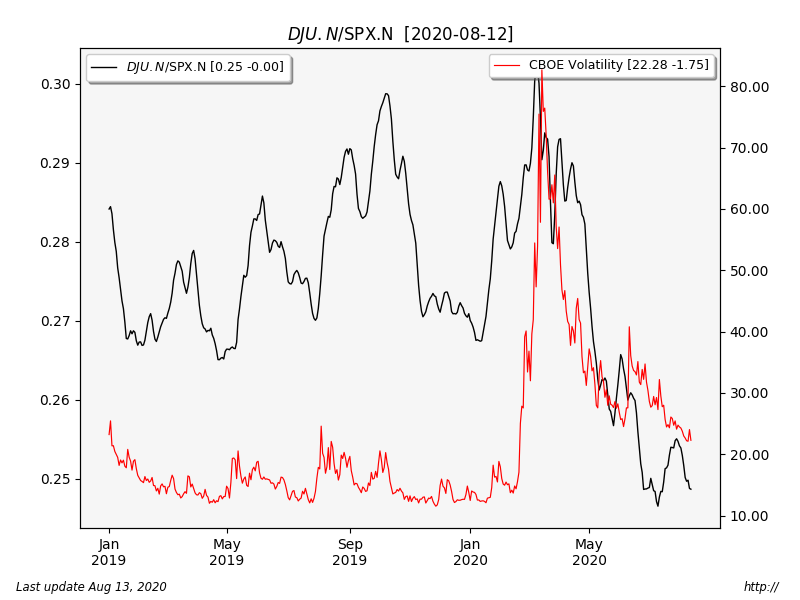 Excellent chart Mr. DF. Many thanks for your effort.