Gold fell all day long, closing at or near the lows of the day. The strong line candle was a reasonably strong bearish reversal (40%), and forecaster fell, dropping into a downtrend. Gold is in an uptrend in the weekly and monthly timeframes.

Gold/euros plunged -99.78 [-5.75%] to 1634.88 on extremely heavy volume. The strong line candle was a possible bearish reversal (32%), forecaster dropped, dropping into a downtrend. Gold/euros is in a downtrend in all three timeframes.

Gold RSI-7 is now at 33, which is slightly oversold. That was quick. No short covering at all – in fact, shorts were probably added today, although by whom, it is hard to say. At end of day, there was no sign of big money stepping in to buy the dip. 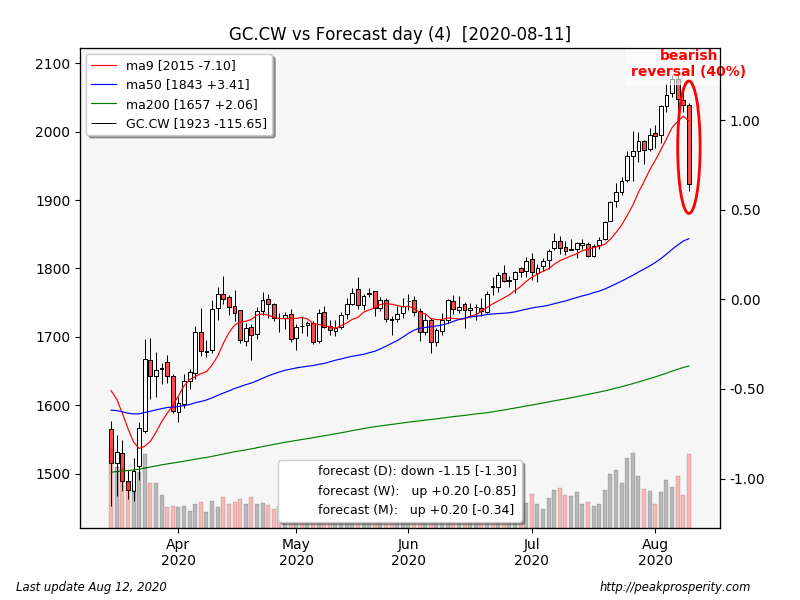 Silver also dropped for most of the day, with almost no bounce off the lows. The strong line candle was a probable bearish reversal (57%), forecaster fell, dropping into a downtrend. Silver is in an uptrend in the weekly and monthly timeframes.

There was some short-covering, but not very much, considering the magnitude of today’s plunge. Clearly we are now in a downtrend. No sign of a low in silver either. 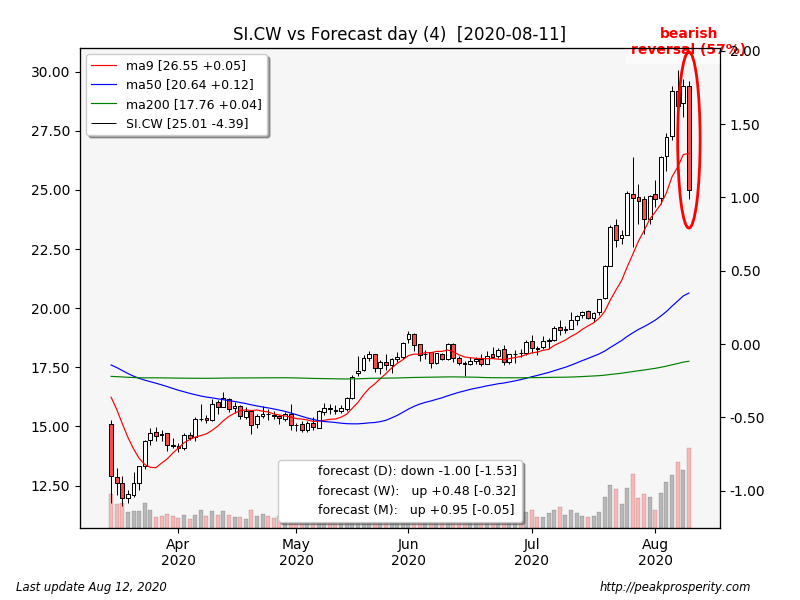 While the selling in the miners was quite heavy, most of the losses happened in the gap down open; by end of day, things had flattened out a bit, and there appeared as though there was at least a little dip-buying happening. RSI-7=30 for the mining shares – that is slightly oversold. No visible low today. 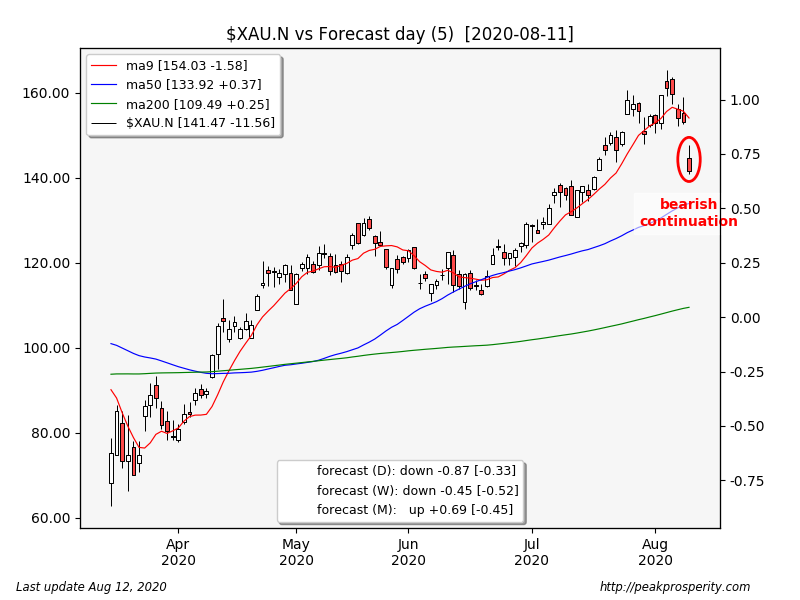 Copper moved down -0.01 [-0.35%] to 2.85 on moderately heavy volume. The spinning top candle was a possible bearish reversal (35%), forecaster climbed, but remains in a downtrend. Copper is in a downtrend in both the daily and weekly timeframes.

Copper remains in a short-term downtrend, but – it is really doing just fine, especially by comparison to the rest of the metals. 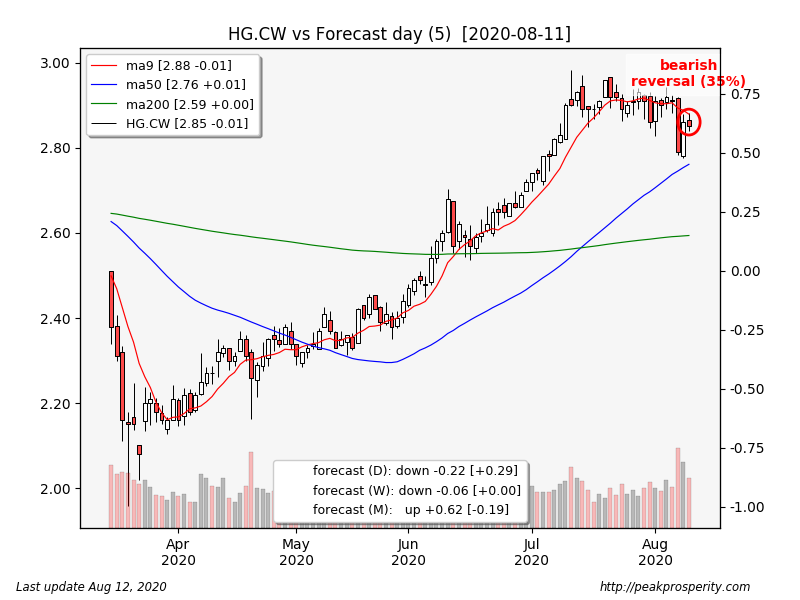 The buck climbed +0.03 [+0.03%] to 93.61 on moderately heavy volume. The doji candle was neutral, forecaster climbed, moving higher into its uptrend. The buck is in an uptrend in the daily timeframe.

The buck plunged during London, but rallied during US trading time, ending the day mostly unchanged. Reversal still in progress. The buck didn’t contribute at all to the big move lower in PM. 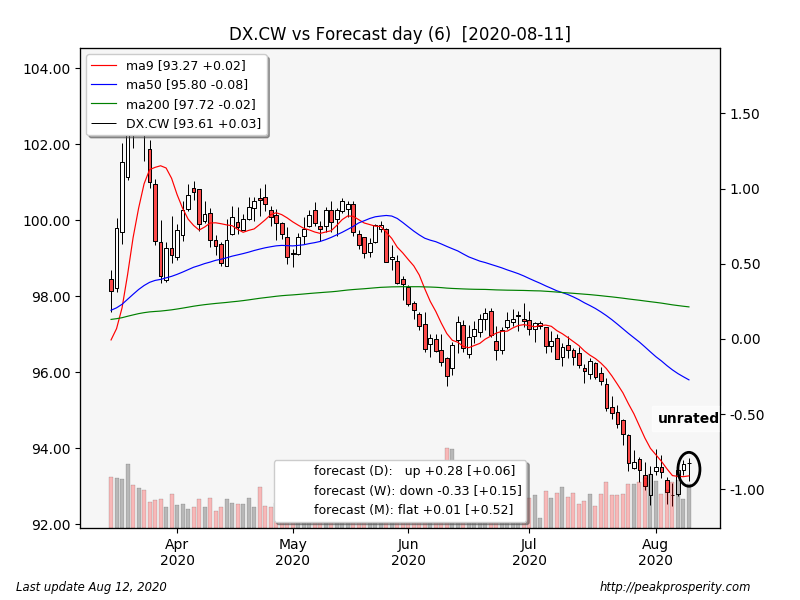 Crude fell -0.32 [-0.76%] to 41.82 on moderately heavy volume. The long black/shooting star candle was a reasonably strong bearish reversal (43%), forecaster dropped, dropping into a downtrend. Crude is in a downtrend in both the daily and weekly timeframes.

It was a failed rally today for crude – price ran up almost to 43, before selling off for the rest of the day. The candle was strongly negative for a single candle print. Crude has been teasing us like this for quite some time. Is this really the top? Long term (monthly) still remains positive. 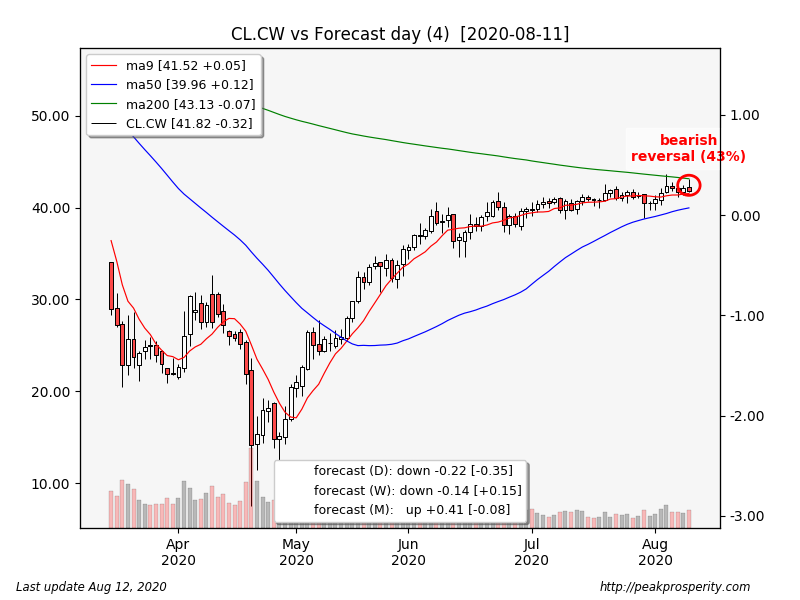 SPX fell -26.78 [-0.80%] to 3333.69 on moderately heavy volume. The bearish engulfing candle was a reasonably strong bearish reversal (44%), forecaster dropped, but remains in an uptrend. SPX is in an uptrend in all three timeframes.

SPX rallied in the futures markets overnight, and got to within maybe 20 points of a new all time high but ultimately failed to break out to higher levels. All of the damage happened in the last 2 hours of trading. The candle print was reasonably bearish, but today’s move was not enough to cause a bearish reversal. Curiously, the NYSE advance ratio was 50%, which suggests that just the large issues sold off today. That’s not bearish. 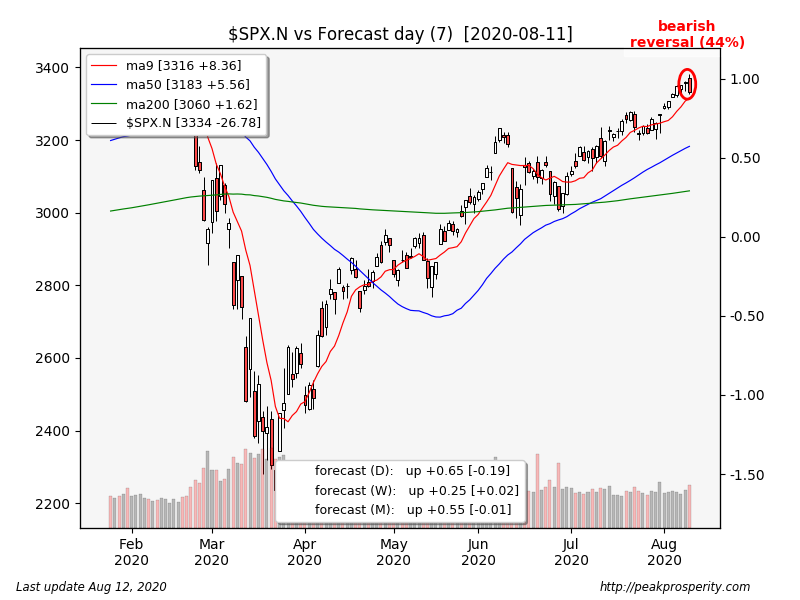 TLT fell -1.19%. The gap down doji candle was a bearish continuation, forecaster dropped, moving deeper into its downtrend. TLT is in a downtrend in both the daily and weekly timeframes. The 30-Year yield rose +6.0 bp to +1.31%.

TY dropped -0.36%. The confirmed bearish nr7 candle was a possible bearish reversal (34%), forecaster dropped, moving deeper into its downtrend. TY is in a downtrend in both the daily and monthly timeframes. The 10-Year yield rose +4.0 bp to +0.63%.

These were some good-sized moves in bonds; the 10-year is now well below the 9 MA, and is perhaps entering a real downtrend.

JNK fell -0.86%. The strong line candle was a bearish continuation, forecaster fell, dropping into a downtrend. JNK is in an uptrend in the weekly timeframe.

This was a reversal for crappy debt – it plunged convincingly through its 9 MA. Risk off. 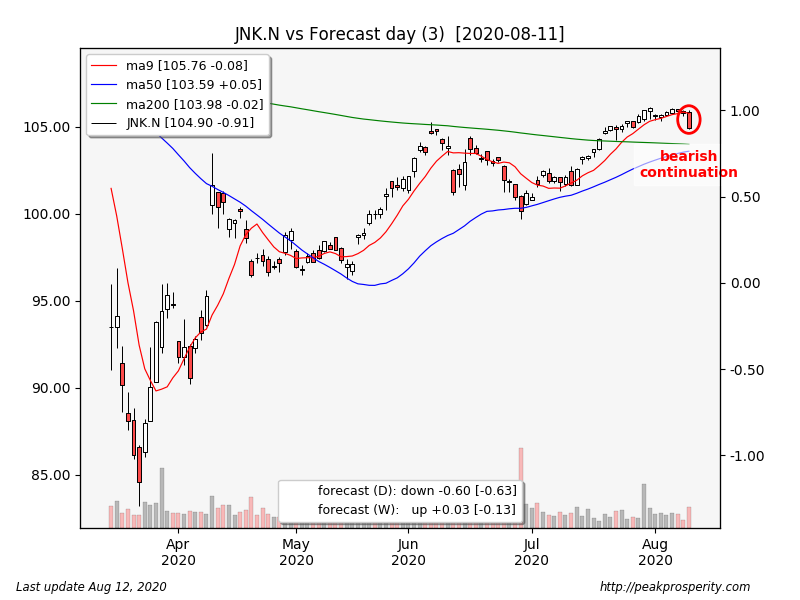 The GLD ETF tonnage on hand dropped -4.19 tons, with 1258 tons remaining in inventory.

While the physical ETFs remain in fairly strong discount, premiums sharply increased, especially on silver, after the big decline.

Gold, silver, and the miners were all crushed today, with silver hit hardest. Selling started in Asia, and it just continued all day long. All 3 items closed at or near the lows of the day.

My guess: over the past week or so, the banksters helped run the price higher, while selling off their mining shares. If you recall, the miners severely underperformed during that time. Then, once their miner holdings were gone, they dumped their GC and SI contracts, causing today’s plunge. Just a guess.

We did see some short-covering today in silver, but none at all in gold. How much further this has to go is anyone’s guess. The fundamentals underpinning gold’s breakout above 1900 have not changed, so I’d assume buyers would start to appear once price drops low enough. Certainly we are seeing this in physical gold and silver; premiums are at 15% on the 100 oz bars!

For those of us who think this rally was justified by fundamentals and was a long time in coming, it might be hard to accept that the rally was as engineered – perhaps “helped” is a better word – as today’s plunge. But that’s how it feels to me. It felt like it went up unnaturally quickly.

But at some point, as I said, buyers will appear, and the plunge will stop. In Asia right now, there is a bounce – a $70 bounce (in gold) trough to peak, so its not a minor one. Maybe it will mark the low.

I suspect the banksters are just helping to make a wild ride a bit wilder. I’m not clever enough to pick the peaks (unlike some people here) – the valleys I do a bit better with. I added a miner to my list at end of day today. It might not be the low, but – it was a good 20% discount off the highs.

Risk assets are starting to look a bit more iffy; equities are hinting at a top (although they’ve done that a number of times and haven’t delivered yet), while crappy debt has definitely started to correct. Often crappy debt will be the coal mine canary.

The buck may have gone nowhere today, but forecaster liked the dip-buying it saw.

AZ and FL cases continued to fall; CA cases have spiked higher once more. Nationally, cases have started to creep higher. That’s probably due to CA.

So it looked like money was moving into the bank stocks yesterday. Am I fooling myself?

I can’t figure out where the money is going.

Try using a ratio chart to see where money is moving.  For example, XLF:SPY weekly – or $BKX:SPY.  Maybe that’s why Uncle Warren is a buyer.  They are definitely  on sale.  Whether they eventually become more expensive is anyone’s guess.

Looks like some buyers have shown up for both gold and silver.