Gold chopped sideways for much of the day, rallying briefly in early US trading, only to sell off for the rest of the day into the close. The long black candle was unrated, but forecaster climbed, moving higher into its uptrend. Gold is in an uptrend in all three timeframes.

Gold/euros dropped -3.90 [-0.22%] to 1734.66 on moderate volume. The long black candle was unrated, forecaster climbed, moving higher into its uptrend. Gold/euros is in an uptrend in the daily and weekly timeframes.

No clear signal from gold today; it moved down to test the 9 MA, but found support. RSI-7 is down to 68. A fair number of contracts stood for delivery. Forecaster saw the day’s action as mildly positive. 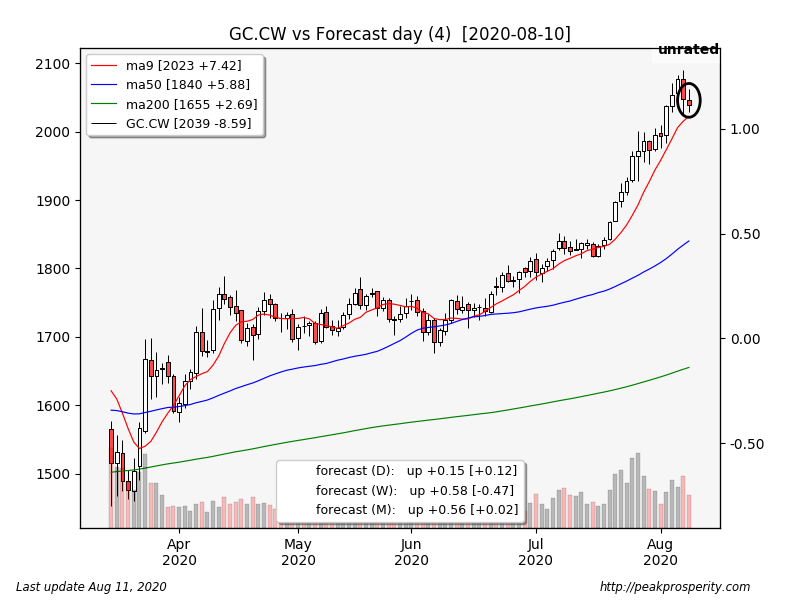 It appears as though round number 30 is acting as some form of resistance for silver. RSI-7 is back up to 82. Is silver running out of gas? So far, it is not. In fact, we saw some short-covering today. Reviewing the weekly chart, its just incredible. To review: we’ve almost had a double (17.50 to 29) in just five weeks time.

Still no reversal signal for silver. 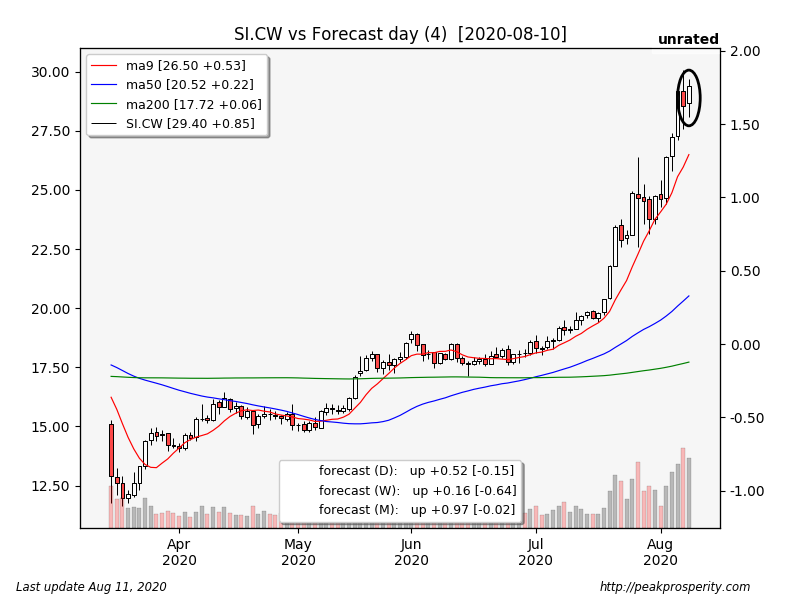 Miners gapped up a bit at the open, rallied for the first 40 minutes of the day, then sold off through end of day. GDX fell -0.82% on moderate volume, and GDXJ dropped -0.49% on moderately light volume. XAU moved down -0.72%, the long black candle was a bearish continuation, forecaster climbed, but remains in a downtrend. XAU is in an uptrend in the monthly timeframe.

Miners looked weak today; the failed rally was not a good sign. While they managed to avoid making a new low, it wasn’t by much. The price moves today are a good reminder: its dangerous to buy during that first hour. Lots of headfakes happen during that time. Weekly forecaster is now flat. 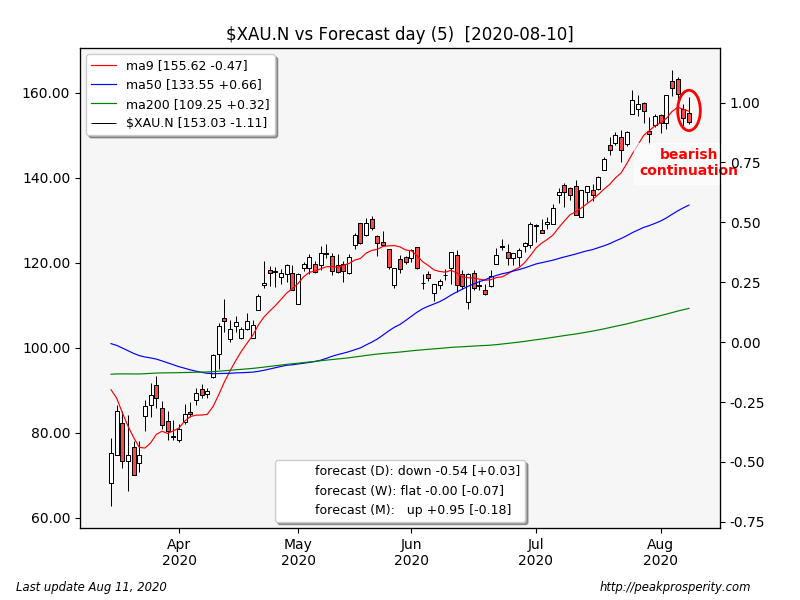 Copper shot up +0.07 [+2.51%] to 2.86 on very heavy volume. The long white candle was a probable bullish reversal (50%), forecaster climbed, but remains in a downtrend. Copper is in a downtrend in both the daily and weekly timeframes.

Copper’s rally looked good today; it was a very strong single candle print. While copper remains in a downtrend, I’m not sure how long that will last. 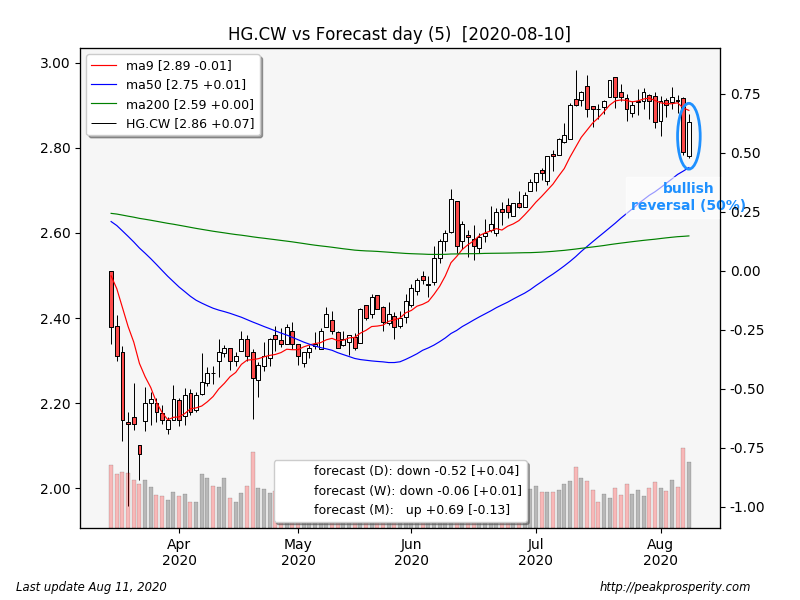 The buck climbed +0.16 [+0.17%] to 93.58 on moderately light volume. The short white candle was a bullish continuation, forecaster climbed, moving higher into its uptrend. The buck is in an uptrend in the daily and monthly timeframes.

The buck is inching higher following the probable bullish reversal last Friday – with “inching” being the operative word. Still, monthly forecaster is back in a slight uptrend – that’s a positive sign. If the cycle is turning, that should help the buck move slowly higher over time. Pattern for the buck looks a bit like a double bottom – if it pans out (if the buck can close above the previous high), then this might indicate a more important low is in. 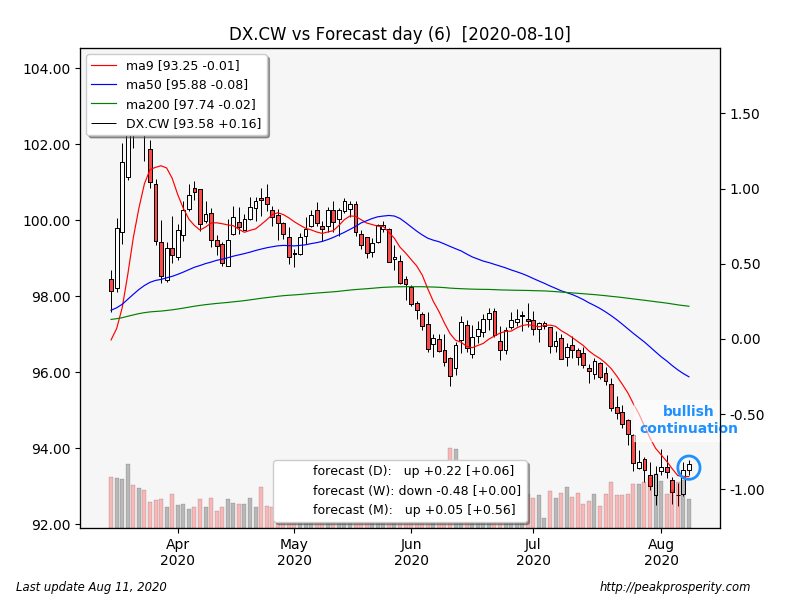 Crude climbed +0.40 [+0.96%] to 42.14 on moderate volume. The long white candle was neutral, forecaster climbed, rising into an uptrend. Crude is in an uptrend in the daily and monthly timeframes. 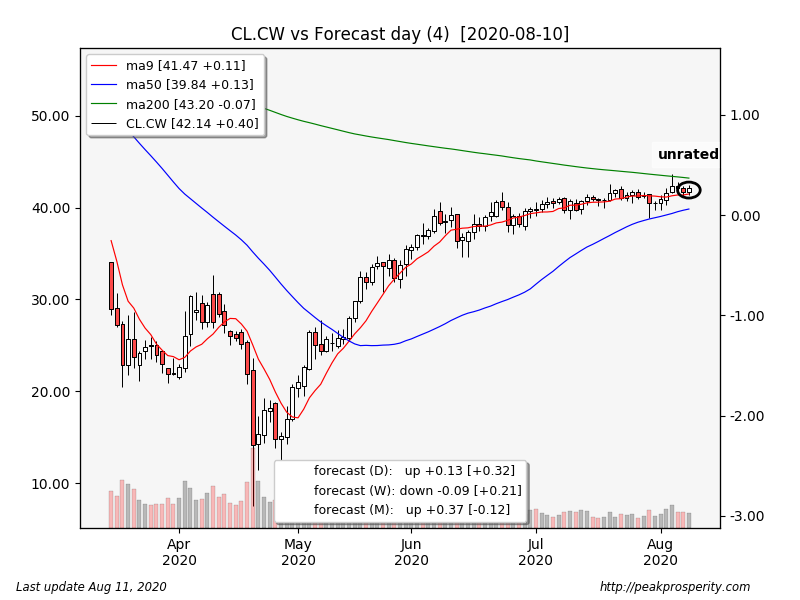 SPX moved up +9.19 [+0.27%] to 3360.47 on moderate volume. The high wave candle was a bullish continuation, forecaster dropped, but remains in an uptrend. SPX is in an uptrend in all three timeframes.

SPX is nearing the all time high set back in February; it is only 30 points away. Puts are getting substantially cheaper. DJIA is still well below the previous highs; this suggests international money is less enthusiastic about the US market than the domestic money. 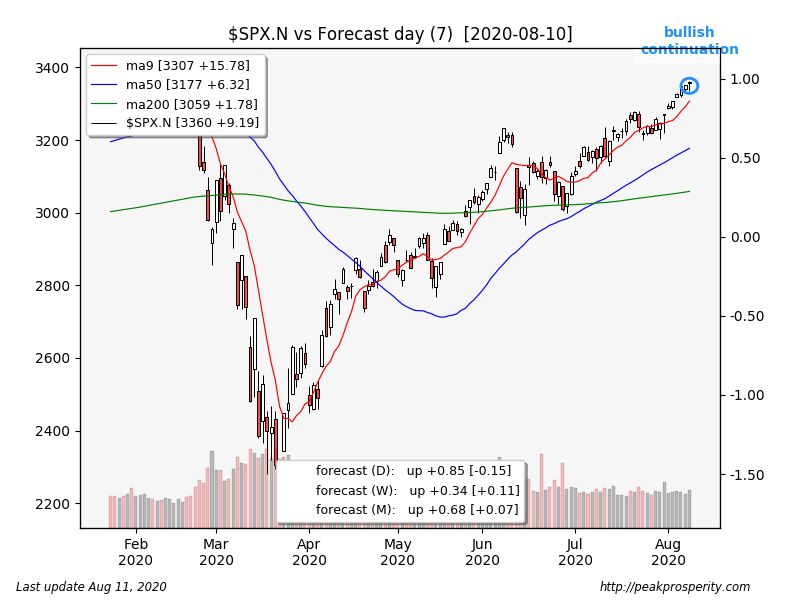 TLT dropped -0.45%. The black marubozu candle was a bearish continuation, forecaster climbed, but remains in a downtrend. TLT is in a downtrend in both the daily and weekly timeframes. The 30-Year yield was unchanged at +0.0 bp to +1.23%.

TY inched down -0.06%. The spinning top candle was a bearish continuation, forecaster was unchanged, and remains in a slight downtrend. TY is in a downtrend in both the daily and monthly timeframes. The 10-Year yield fell -2.0 bp to +0.55%.

JNK dropped -0.07%. The unknown candle was unrated, forecaster dropped, but remains in an uptrend. JNK is in an uptrend in the daily and weekly timeframes. 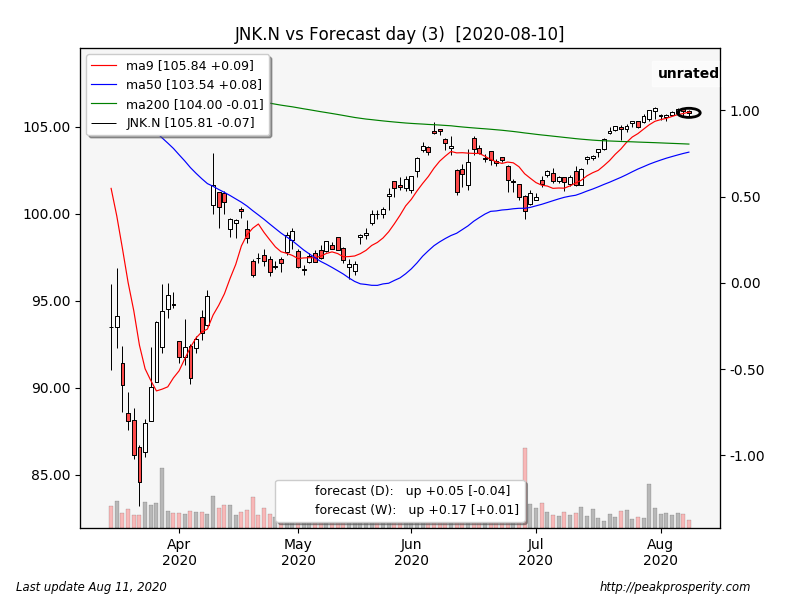 The GLD ETF tonnage on hand was unchanged at +0.00 tons, with 1262 tons remaining in inventory.

Discounts at physical ETFs remain, however premiums for the big physical bars have not changed much at all. Pe
rhaps that +1.62% premium on kilo bars is why so many contracts stood for delivery at COMEX today.

After negotiations on the corona virus stimulus package failed on Friday, Trump signed an executive order this weekend deferring social security taxes along with a host of other things, including prohibiting evictions for renters and homeowners. Team Blue has indicated they will return to the bargaining table; presumably internal polling has indicated they came up short on this issue.

Gold and silver diverged sharply today; gold staged a failed rally, while silver shot up almost a buck, testing round number 30. The miners also had a failed rally, which topped out about 20 minutes before gold did. This gold/miner pattern could be a sign of ongoing distribution by Wall Street.

Equities are slowly moving higher; that all time high is just 30 points (1%) away. With RSI-7 at 80, it is getting a bit overbought. Crappy debt looks weak, crude is mildly bullish, while copper is trying to recover.

The buck appears to be in the process of putting in a low.

Cases are slowly dropping in the US; former leading state Arizona cases are down almost 70% from the peak. Deaths are falling also, but a bit less rapidly. The rest of the states with spiking cases are mostly following Arizona lower.

Over in Europe cases are rising, but deaths remain mostly unchanged. Across the pond, it appears to be one of those death-free “second waves” that may be an artifact of better testing, or perhaps just the less-vulnerable younger people who have finally decided they don’t need to hide in their basements any longer.

September is on the way; it is sometimes a very bad month for risk assets – more often than not, actually. With the elevated risk asset prices, this could be a problem. We might also start hearing from the MSM about a really scary third wave (!), given winter is coming soon. Perhaps we should all “shelter in place” once more, just in case!

It could happen, especially in the blue states. This would probably be bearish for risk assets.

I know you all want me to tell you what happens next with PM. My guess: PM’s near term fate lies with the outcome of the stimulus negotiations.

I’m now considering at what point to go long gold (after dumping all PM’s last week to take profits from the run up).

Here is the AUD/Gold Chart as of now.

For us in OZ the AUD/USD is still strengthening so any drop in USD/Gold is magnified for us using AUD….. Nice.

I’m less tactical than you – nice work in picking the top.  I’m not so good at that.  BUT you know with W/M RSI values that high, a correction was bound to happen.

I’ll be curious to see how much short covering we see today.  And how the miners close.

I expect first hour for the miners will be pretty ugly.  Perhaps – by design?  I’m always skeptical when gold gets pounded before market open.

Today should be interesting. I think it will be a lose-lose day for me.

Thank god I bought some XLF calls….they are the only thing green on my board.

Have we reached a low?  Is this a good buying opportunity? Or will metals and miners keep getting pounded?

Looks like the announcement from PX-Labs regarding the PX-41 serum may have hosed the precious metals market today.  According to kitco.com (https://www.kitco.com/news/2020-08-11/Gold-silver-suffer-steep-corrective-pullbacks.html) ,

Gold and silver prices are sharply lower in midday U.S. trading Tuesday. Gold has fallen back below $2,000. Traders and investors put risk back on the table Tuesday, due in part to news overnight that Russia has approved a Covid-19 vaccine. Russian President Vladimir Putin told reporters the vaccine has been given to his daughter. However, global health experts are very skeptical and cautioning that the Russian vaccine is premature because it has not gone through full trials that the U.S. and other countries require for approval.

So, there you have it.  Blame Dr. Joseph Albert Nefario, and his friend, Felonius Gru.  For me, I’m sitting this one out, at least until the end of the day.

I just can’t help myself….

At the risk of (continually) looking stupid, I was just able to pick up some short-term ITM call options on the miners that I sold a week or so ago for less than half what I sold them for. I’m bidding well under the bid and getting filled.

Thanks to DennisC for sharing this insight about what’s going on with precious metals.  Would love to hear how others are reacting to this steep decline. I just sold some PHYS.