Gold chopped higher for much of the day, making its new all time high (2081) at around 10 am, moving slightly lower into the close. The long white candle was a bullish continuation, forecaster dropped, but remains in an uptrend. Gold is in an uptrend in all three timeframes.

Gold/euros climbed +11.69 [+0.67%] to 1748.01 on moderate volume. The long white candle was a bullish continuation, forecaster dropped, but remains in an uptrend. Gold/euros is in an uptrend in the daily and weekly timeframes.

Still no shorting at COMEX – in fact, there was a small amount of short-covering. RSI-7=92. No signs of a reversal. In all timeframes, gold is “going vertical.” This usually ends badly (i.e. with a vigorous correction) but it is impossible to say when this will occur. 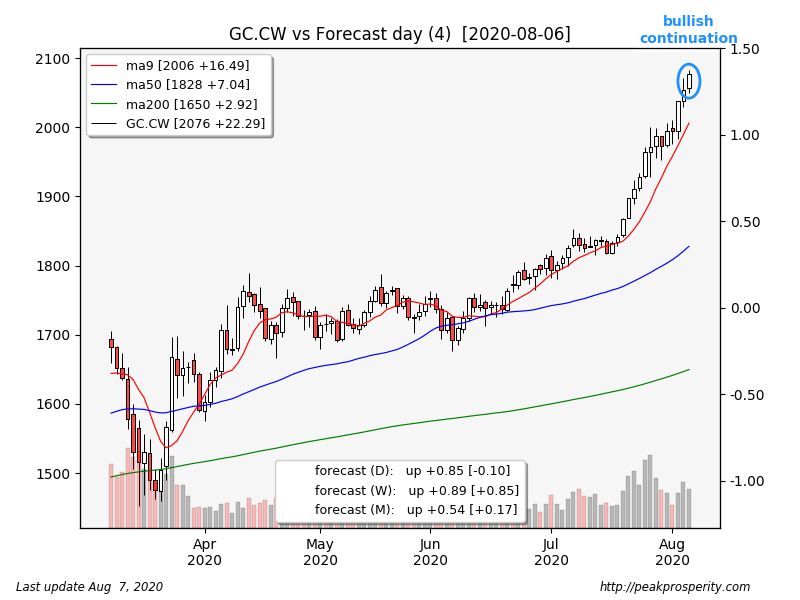 Silver’s rally started late in the Asia session, jumping higher, and then racing higher for the rest of the day, ending the day at the highs. The long white candle was a bullish continuation, forecaster climbed, moving higher into its uptrend. Silver is in an uptrend in all three timeframes.

Unlike gold, there is a fair amount of shorting happening in silver – perhaps 30k contracts over the past two weeks. Can you imagine what silver would have done if not for the shorting? Mind = blown. Not a hint of a reversal for silver either. 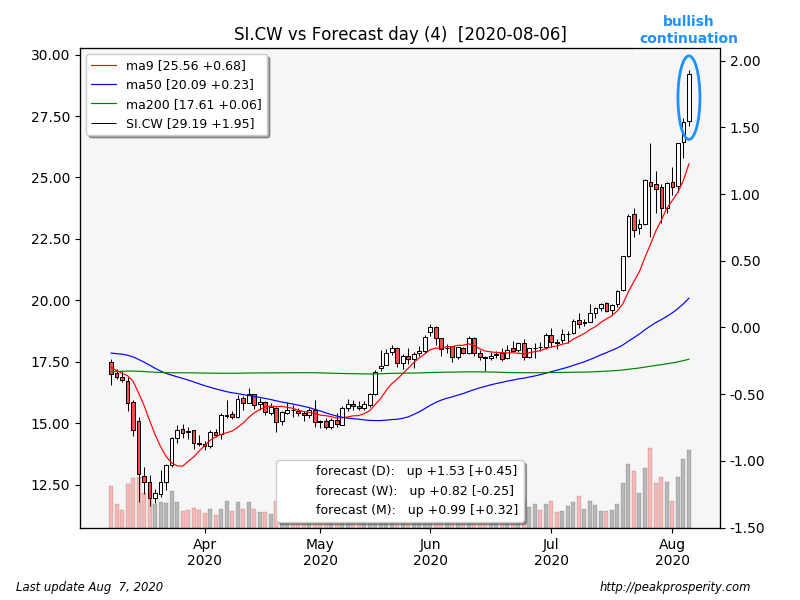 Miners gapped up at the open, sold off in the first hour, but then rallied slightly at end of day. GDX fell -0.67% on moderate volume, and GDXJ dropped -0.66% on moderate volume. XAU moved down -0.96%, the long black candle was a bullish continuation, but forecaster fell, dropping into a downtrend. XAU is still in an uptrend in the weekly and monthly timeframes.

While the candle code wasn’t worried about today’s print, forecaster reversed fairly emphatically. Miners remain above the 9 MA, however. Let’s say no reversal yet for the mining shares. 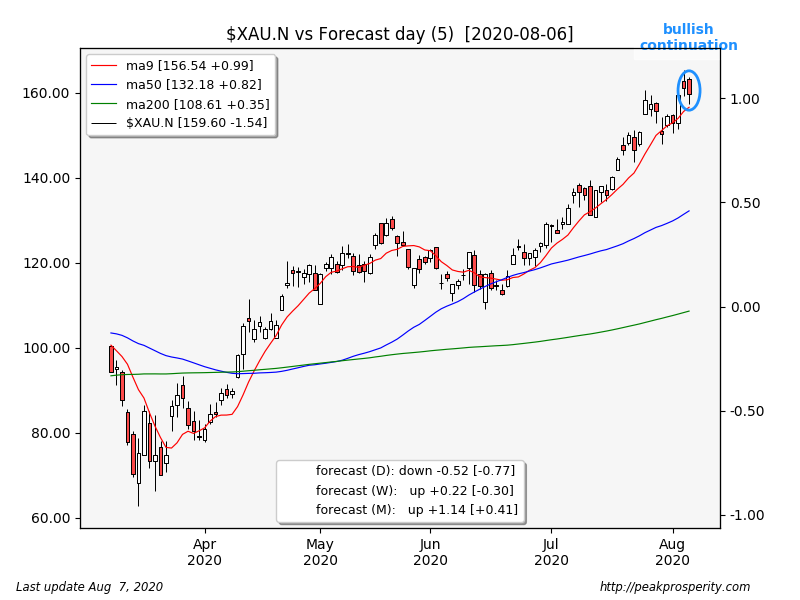 Platinum rose +32.50 [+3.16%], while palladium rose +42.32 [+1.86%]. Platinum finally made a new 3-year closing high today, at long last. Palladium is moving slowly up towards its recent high set last month. Palladium looks substantially more sluggish than the rest of the metals.

Copper fell -0.01 [-0.34%] to 2.91 on moderate volume. The high wave candle was a bearish continuation, forecaster climbed, moving higher into its uptrend. Copper is in an uptrend in all three timeframes.

Copper is basically chopping sideways just below the highs, right at the 9 MA. 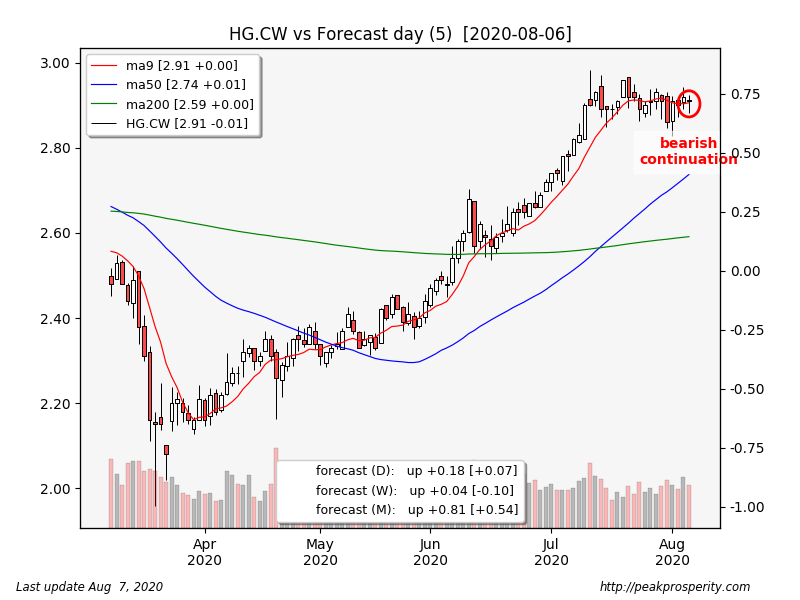 The buck fell -0.09 [-0.10%] to 92.77 on moderately heavy volume. The doji candle was a possible bullish reversal (39%), forecaster fell, dropping into a downtrend. The buck is now back in a downtrend in all three timeframes.

Well the candle was somewhat positive, but the forecaster was not happy. The buck made a new multi-year low today, but managed to rally back off those lows. I dunno. Respect the downtrend, maybe? 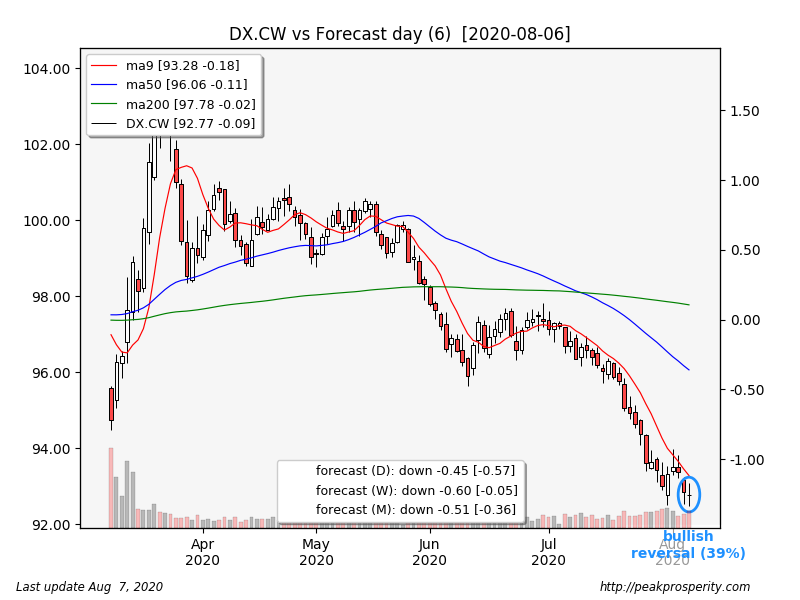 Crude fell -0.23 [-0.54%] to 42.11 on moderately heavy volume. The short black candle was unrated, forecaster dropped, but remains in an uptrend. Crude is in an uptrend in the daily and monthly timeframes.

I dunno about crude. Trends remain weak, but so far, crude has refused to tip over. 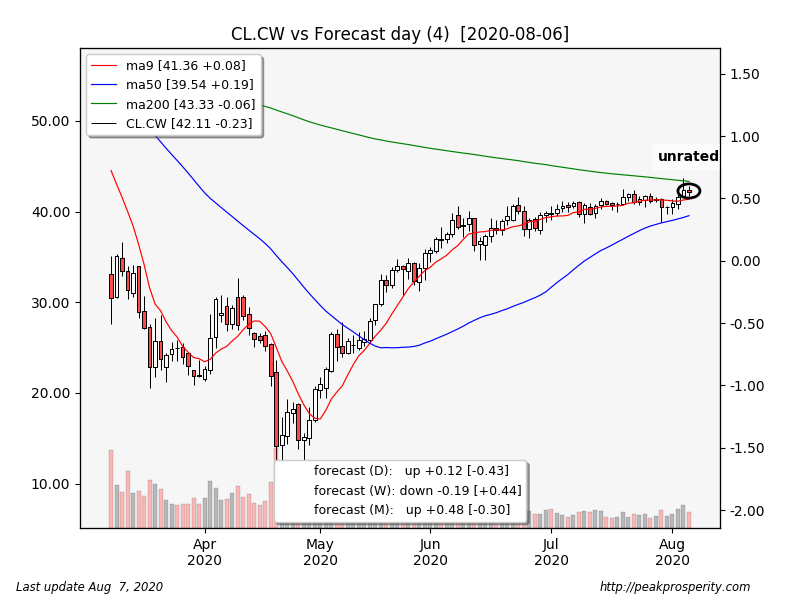 SPX climbed +21.39 [+0.64%] to 3349.16 on moderate volume. The confirmed bullish nr7 candle was neutral, forecaster climbed, moving higher into its uptrend. SPX is in an uptrend in all three timeframes.

Another new 5-month high for SPX. All time high is next. One issue: NYSE advance ratio dropped to 49% today. That says today’s rally was all about a few big issues – most of the rest of the market is not participating. This is a bearish indicator. 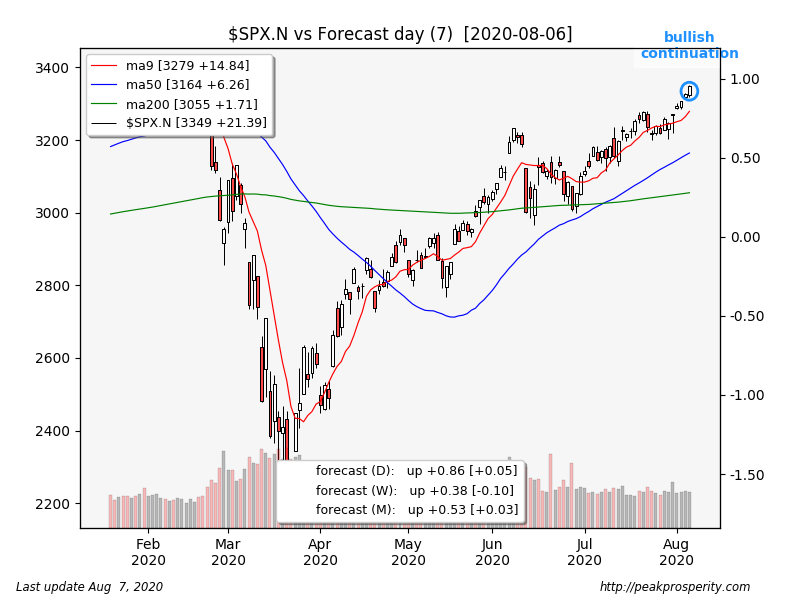 TLT climbed +0.56%. The long black candle was a low-percentage bearish reversal (27%), forecaster dropped, dropping into a downtrend. TLT is in an uptrend in the weekly timeframe. The 30-Year yield fell -4.0 bp to +1.18%.

That’s another new all time low for the 10-year yield.

JNK inched up +0.15%. The short white candle was neutral, forecaster climbed, rising into an uptrend. JNK is in an uptrend in the daily and weekly timeframes.

Unlike SPX, JNK is not making new highs. Crappy debt seems to be struggling. 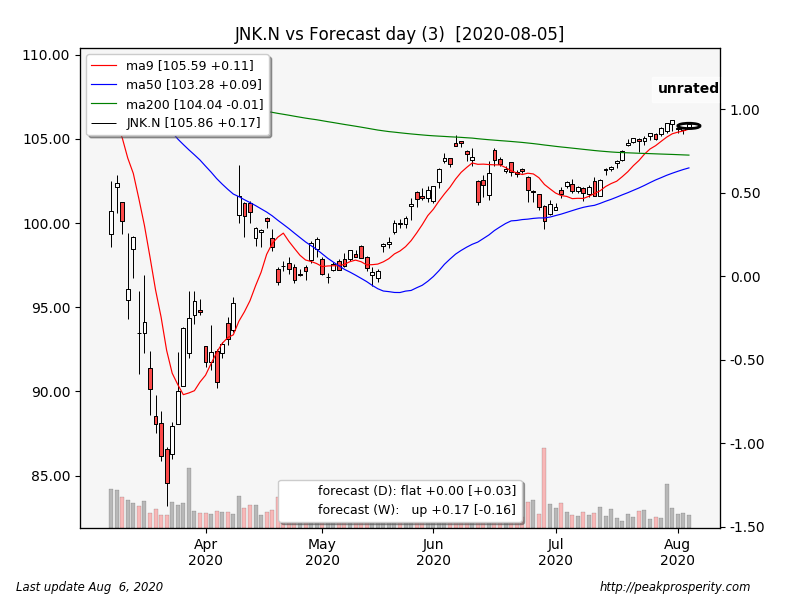 The GLD ETF tonnage on hand was unchanged, with 1268 tons remaining in inventory.

Silver was once again front and center; the $1.95 daily gain was the second highest move in history; the other was back in July 2011 – it was on the way down, not the way up. Gold made another new all time high.

The miners: a skeleton at the PM feast, a fly in the ointment. How can the miners be negative on a day when silver has the second-best day in history? I’ve been trying to come up with an explanation. Here’s my latest attempt:

Perhaps the banksters are selling their miner positions at what they believe to be a near-term top. To move the profit needle at the trading floor, the positions that the banksters own must be very large, so it typically takes days for them to clear them out. If they try to dump them all at once, price will crater – there just won’t be enough buyers.

But if gold and silver are rallying strongly, there will be a stronger bid for the miners. This will allow the banksters to sell their positions more rapidly, without hammering price too much. So one trick is, buy GC & SI, and simultaneously sell the miners – for several days in a row. Once done, sell GC and SI positions, which puts in a top for the metals.

Its a theory anyway.

Risk assets were mixed again; equities made another new high, although a bearish divergence from market breadth is worrisome. Crappy debt, crude, and copper are all looking pretty stagnant, although all of them remain near the recent highs.

Treasury bonds made a new all time (yield) low: 0.51%. Sure. Government is set to print trillions more, handing it out to various fortunate interest groups, and savers get 0.51%.

The buck is showing hints of reversing. Faint hints. The Euro looks a bit tired here at 119. I’m not sure if we are there just yet.

Cases nationwide are starting to drop more emphatically. That’s helped by California, where cases have just cratered over the last few days. Those beachgoers must have stopped sitting on the dry sand. Good job Gavin. It wasn’t about herd immunity, it was all about “the dry sand.” Deaths have started to fall as well. As California goes, so goes the nation. Just in time for that September deadline. 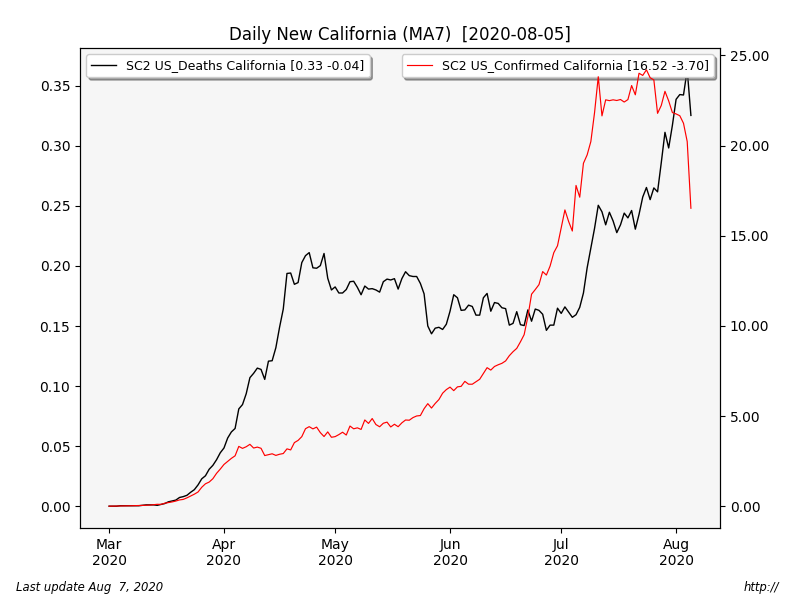 Stimulus? Team Blue remains at the $3.4 trillion figure; Pelosi is unwilling to pass just a simple extension of the current programs. She has leverage, and she plans to use it. After all, money going to real people doesn’t help her Donors in the slightest. Rules for Rulers: “collect the treasure, and distribute it to your Key Supporters” – or as George Carlin put it more prosaically, “It’s a Big Club – and You Ain’t In It!”

It wouldn’t cost $3.4 trillion just to extend the current programs.

What happens to gold if the negotiations break down? Hmm. It probably wouldn’t be good. I think this could go either way.

Yeah I have to agree that it looks like some game is being played with PM. Surely if this was all about the dollar turning to confetti then palladium, platinum and the miners would have enthusiastically joined the party by now?

Having said that it is amazing how trillions is becoming an everyday term. I wonder how much appetite Americans still have for a strong dollar?

Wonderful ruler word stimulus. Nicely hides the fact that it’s based on debt that needs to be repaid and/or erodes your pension.

I’ve got an observation about why the miners are topping out: they are stocks.

If I remember correctly, the miners starting declining before the market crash in the Spring.

Once the S&P hits the all-time high, the few remaining bears will be washed out. Mr. Market should then provide a little deflationary whipsaw to leave the Robinhooders lost in the forest.

The VIX Term Structure hit a low yesterday that typically proceeds a spike in the VIX over the next few weeks. Although I have bought some VIX calls, I continue to wait for the VIX to fill that gap below 20 before I go “all in”. Maybe I shouldn’t wait any longer, it’s hard to tell.

I’m sure the FED would love another taste of market panic so they could justify buying equities. It would also force the hand on the politicians to send me another check. The last check I used to help pay my taxes. What a waste.

Commodity pull back … pretty much all across the metals and my met coal stocks.

Notice that the pullback is lined up with the plunge in the EUR/USD.  Not saying this is causal or anything.  Still trying to sort out the whys.  Maybe “it was just time”.

There is also the very curious – and massive – plunge in copper.  Copper & silver are correlated.  And crude isn’t doing well either.

oh – phusg – I thought about an SI contract to hedge my PSLV position.  I just wanted to wait for an actual signal to put it on.  And literally anything could happen over the weekend.  We could have a correction today, and they could get a lot closer (I’m sure everyone is doing polling 24/7 on how this all looks) over the weekend, and by Monday they could be all lined up to print another $2 trillion.

BTW I don’t believe any of this will ever get paid back.  It will lie on the balance sheet of the Fed forever.  Just like the BOJ is doing.  And the ECB.  It will have been monetized.

There appears to be no way out for the bullion banks deteriorating $53bn short gold futures positions ($38bn net) on Comex. An earlier attempt between January and March to regain control over paper gold markets has backfired on the bullion banks.

Unallocated gold account holders with LBMA member banks will shortly discover that that market is trading on vapour. According to the Bank for International Settlements, at the end of last year LBMA gold positions, the vast majority being unallocated, totalled $512bn — the London Mythical Bullion Market is a more appropriate description for the surprise to come.

An awful lot of gold bulls are going to be disappointed when their unallocated bullion bank holdings turn to dust in the coming months — perhaps it’s a matter of a few weeks, perhaps only days — and synthetic ETFs will also blow up. The systemic demolition of paper gold and silver markets is a predictable catastrophe in the course of the collapse of fiat money’s purchasing power, for which the evidence is mounting. It is set to drive gold and silver much higher, or more correctly put, fiat currencies much lower.

This is only the initial catalysing phase in the rapidly approaching death of fiat currencies.