Gold made a new all time high to 2009 at the open in Asia, but then fell back, and chopped sideways for the remainder of the day. The long black candle was a bullish continuation, forecaster dropped, but remains in an uptrend. Gold is in an uptrend in all three timeframes.

Gold/euros climbed +9.48 [+0.56%] to 1696.53 on moderately light volume. The long black candle was a possible bearish reversal (34%), forecaster climbed, moving higher into its uptrend. Gold/euros is in an uptrend in the daily and weekly timeframes.

Today was a new all time closing high for gold/Euros today; the plunge in Euros caused that to happen. Gold’s (daily) uptrend appears to be losing a bit of strength. No shorting at the highs though, so that’s a positive sign.

There were 5038 contracts that stood for delivery today. I’m now downloading this data automatically for both gold and silver. In a few months, I’ll have enough for a chart! I offered my new automatic downloader python code to Craig Hemke in exchange for his data, but he politely declined! I even tried the wayback machine, but unfortunately there weren’t enough copies saved to cover 2020. 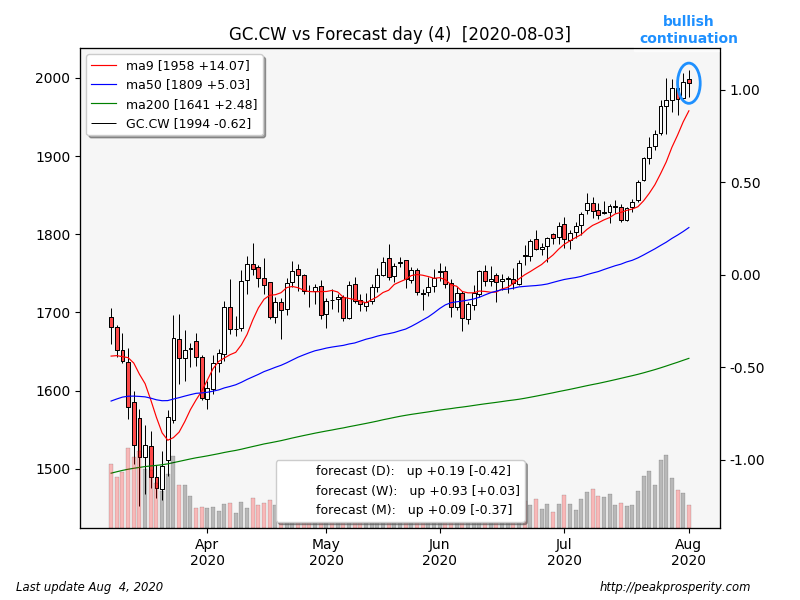 Silver shot higher in Asia along with gold, right at the open, retreated, then chopped sideways for the rest of the day. The spinning top candle was a reasonably strong bearish reversal (43%), forecaster dropped, but remains in an uptrend. Silver is in an uptrend in all three timeframes.

Silver saw a huge number of shorts dumped into the market today; only 218 contracts stood for delivery. The banksters don’t seem to be worried about having to deliver silver right now. The candle print was strongly bearish, but daily forecaster didn’t seem to mind. At least not today anyways. 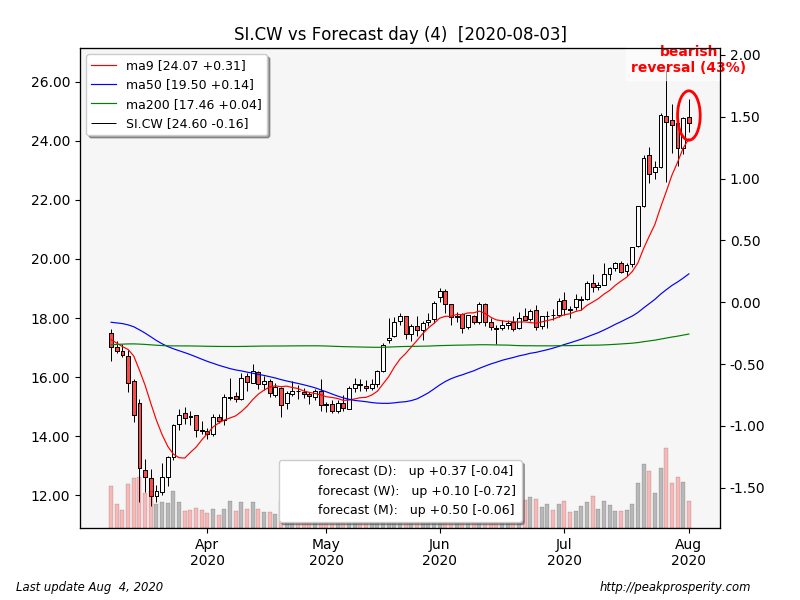 The miners sold off at the open, tried to rally and then failed, and then rallied into the close, erasing much of the earlier losses. GDX fell -0.93% on moderately light volume, and GDXJ moved down -0.38% on moderate volume. XAU dropped -1.13%, the spinning top candle was a bearish continuation, forecaster climbed, but remains in a downtrend. XAU is in a downtrend in both the daily and weekly timeframes.

While traders did buy the dip today, trends in the mining shares look weak, and perhaps slightly bearish overall. XAU ended the day just below the 9 MA. 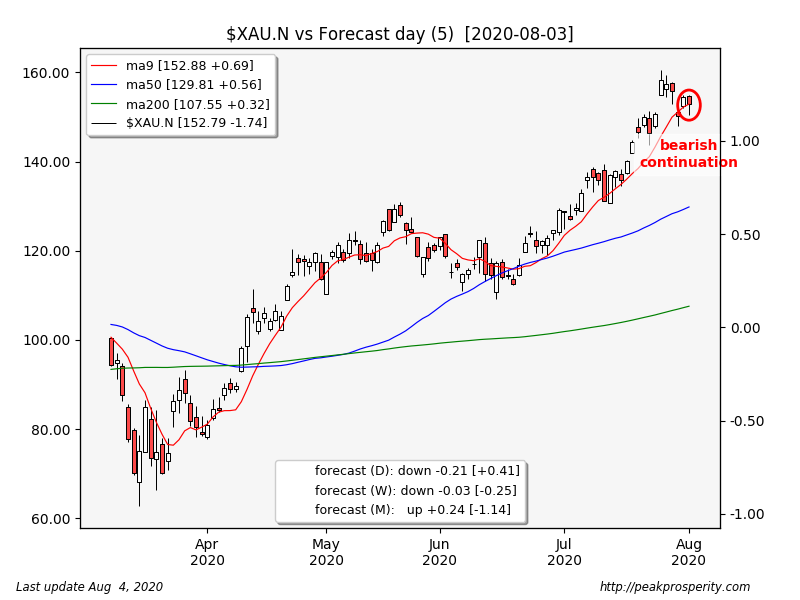 Copper rallied +0.05 [+1.75%] to 2.91 on moderate volume. The long white candle was a reasonably strong bullish reversal (43%), forecaster climbed, but remains in a downtrend. Copper is in an uptrend in the weekly and monthly timeframes.

Strong rally for copper – positive candle print, but not quite enough for a bullish reversal. Copper is right back up against its 9 MA. 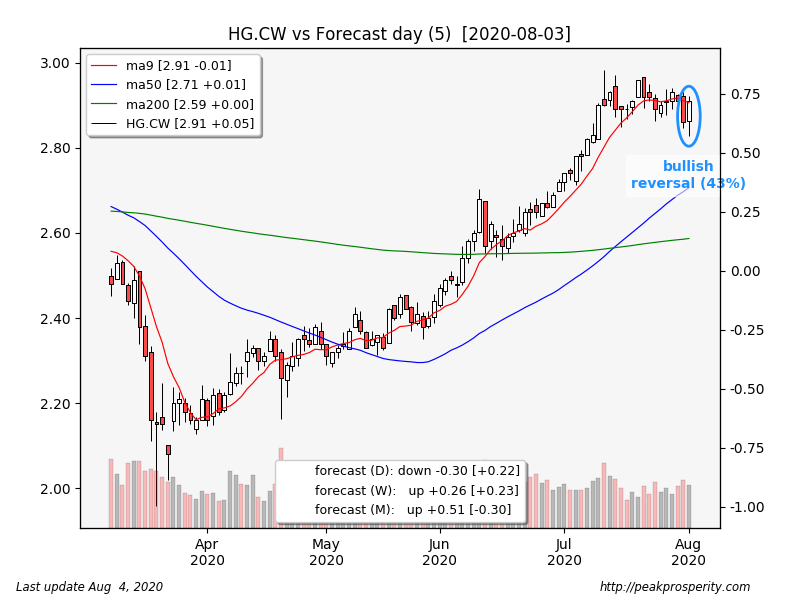 The buck climbed +0.18 [+0.19%] to 93.51 on heavy volume. The shooting star candle was a bullish continuation, forecaster climbed, moving into a state of no-trend. The buck is in a downtrend in both the weekly and monthly timeframes.

The buck was a heartbeat away from a swing low today; forecaster thought it might be a reversal too. Buck is still well below the 9 MA; cautious optimism for the buck right now. I’d expect at least some sort of rebound off the dreadfully oversold levels from last week – and monthly downtrend isn’t all that strong. 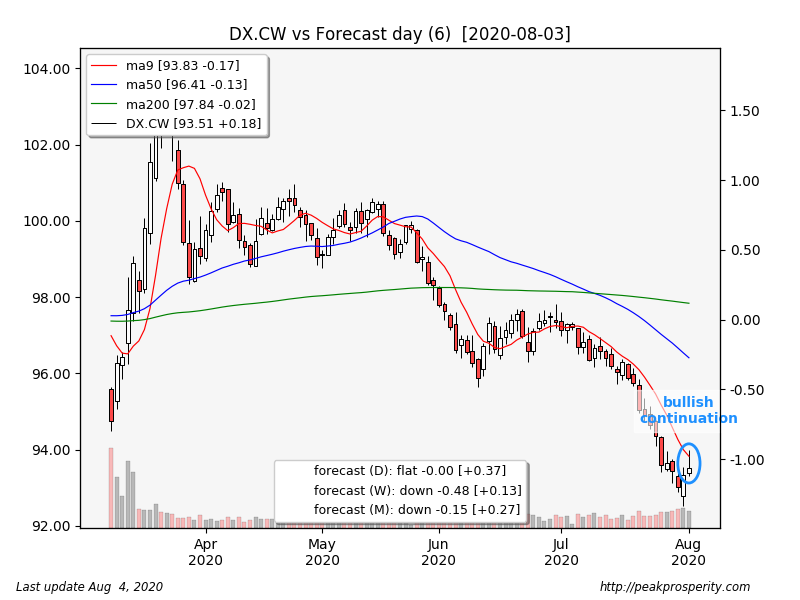 Crude climbed +0.37 [+0.91%] to 40.91 on moderate volume. The spinning top candle was a bearish continuation, forecaster climbed, but remains in a downtrend. Crude is in a downtrend in both the daily and weekly timeframes.

Crude could go either direction here; the trends are very weak. 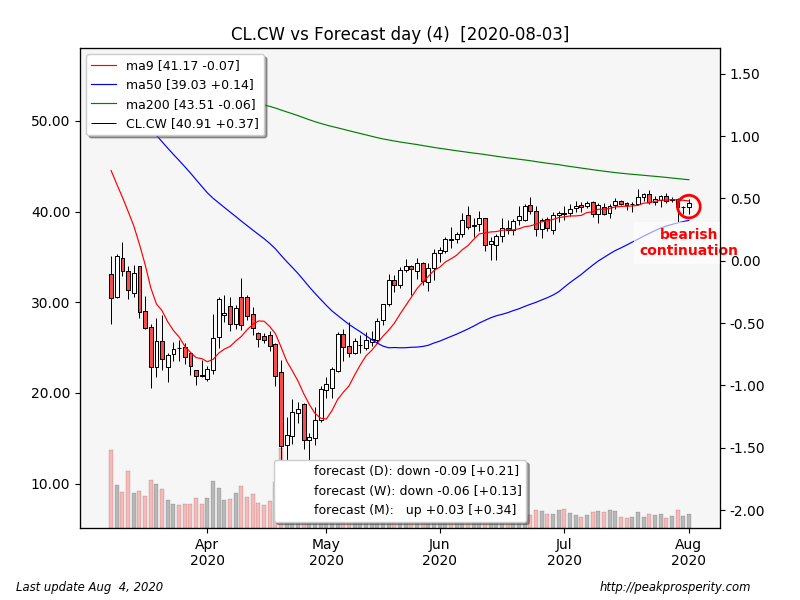 SPX climbed +23.49 [+0.72%] to 3294.61 on moderate volume. The spinning top candle was a bullish continuation, forecaster climbed, moving higher into its uptrend. SPX is in an uptrend in all three timeframes.

Today marked a new 5-month high for SPX. Trends remain just moderately strong. In recent weeks, NYSE Advance Ratio has been fading as price moves higher; this is a bearish divergence, since it suggests that only a relativelly small number of larger names are responsible for the move higher. This tends to be a danger signal. 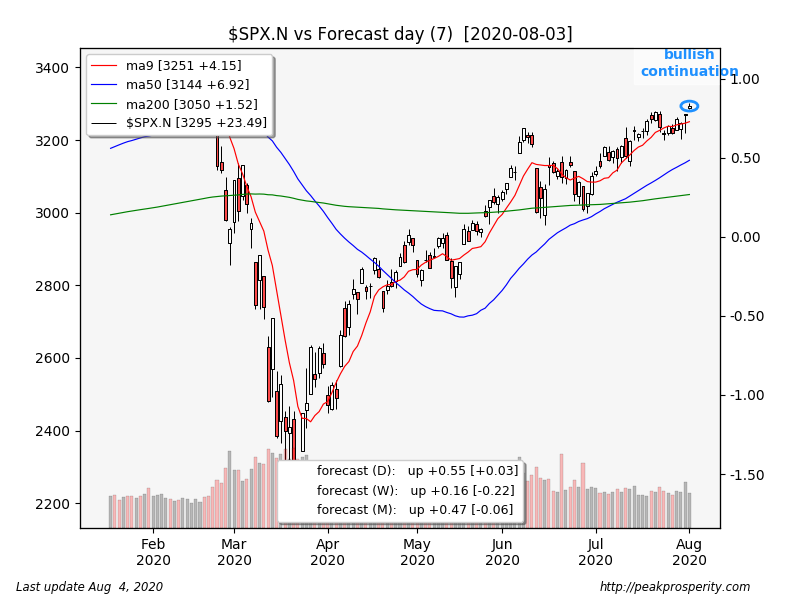 TLT dropped -0.61%. The long white candle was a bearish continuation, forecaster dropped, moving deeper into its downtrend. TLT is in an uptrend in the weekly timeframe. The 30-Year yield rose +4.0 bp to +1.24%.

TY dropped -0.11%. The bearish harami candle was neutral, forecaster was unchanged and remains in an uptrend. TY is in an uptrend in the daily and weekly timeframes. The 10-Year yield rose +1.0 bp to +0.56%.

The 10-year remains within a few basis points of all time lows.

JNK dropped -0.42%. The spinning top candle was a bearish continuation, forecaster dropped, but remains in an uptrend. JNK is in an uptrend in the daily and weekly timeframes.

Well that’s a reasonably large risk off signal from crappy debt. No bearish reversal yet, but – close. 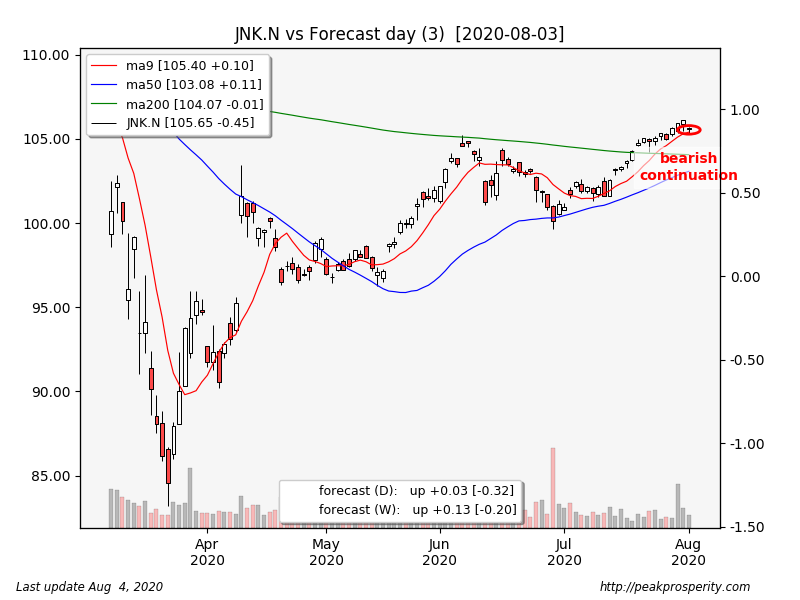 The GLD ETF tonnage on hand climbed +6.43 tons, with 1248 tons remaining in inventory.

Discounts in the physical ETFs have declined, and premiums for physical bars remains.

Gold and silver mostly just moved sideways today – a 16-cent drop is considered “sideways” given the recent movesover the past month! There was a huge amount of shorting that happened in silver, while in gold there was some slight short-covering. I’m guessing that’s mostly about deliveries. Miners drifted lower, although there was dip-buying on the slight decline. Miners look to be the weakest of the bunch.

While SPX rallied strongly making a new 5-month high, crappy debt fell; these are conflicting signals for risk assets. What’s more, the NSYE advance ratio is telling us that fewer, larger stocks are responsible for much of the current rally. That’s a bearish sign. Copper is not confirming this, however – it looks reasonably strong.

We are seeing hints of a possible bullish reversal in the buck; whether it turns out to be a real reversal (perhaps driven by falling case counts in the US – and rising case counts over in Europe, and/or a bump in the polls for #BadOrangeMan #NotMyPresident), its hard to say. Euro is extremely overbought right now.

That German constitutional court decision is scheduled to go into effect … right around now.

Note that it is perfectly reasonable for both the buck and gold to rally at the same time, but what that would mean is that gold/Euros is simply going nuts. Certainly this is possible, but this only happens if there is Big Trouble Across The Pond. Which could happen. “More cases! Lock down the economy! Close the schools!” [And whatever you do, DO NOT look at Sweden.]

These are historical drops in GDP. The consequences of these drops means there might be a shoe or two left to drop across the pond. If the various national leaderships threaten more lockdowns, how will the European public react? We might end up with 30-40% GDP drops by end of year if that happens. Sweden might just be the only nation left standing. Small business will simply be wiped out.

If it weren’t for Sweden, “there would be no alternative.” But there Sweden sits, for all to see. 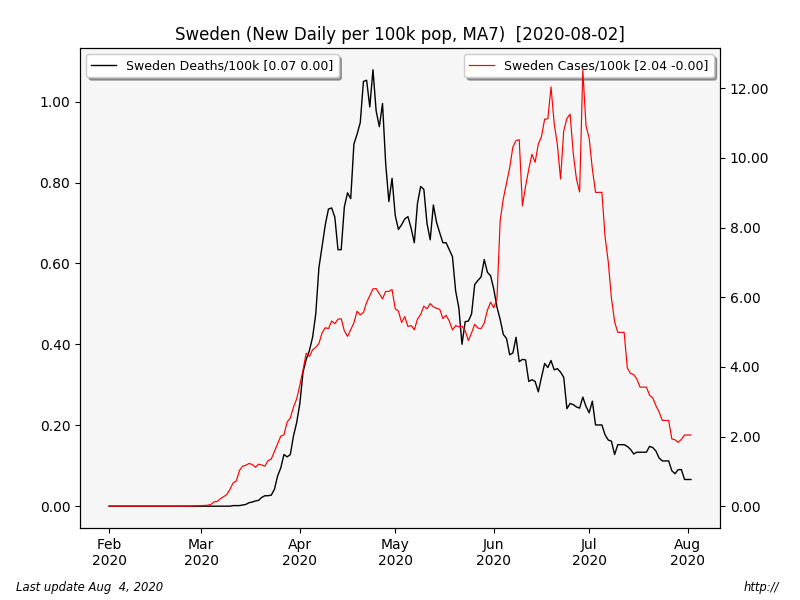 Peak Euro. We might very well be at that turning point right now.

I spent some time poking around with my monthly DGS10 predictor.  Are we at a yield low?  Maybe.  It is starting to turn up.  But it might also be a few more months.

Looks like a “swing high” in cases for the US – that, or a confirmed bearish NR7, which are both relatively bearish candle prints.  That’s good news! 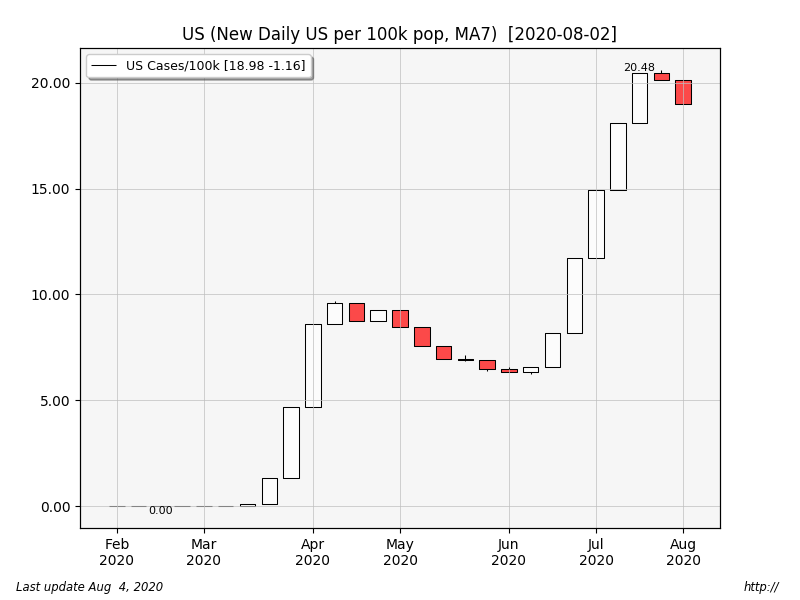 Something funny going on there…

“Something funny going on there…”

In an election year? By people that stand to benefit? Tell me no😃

Except AZ topped out prior to this takeover. 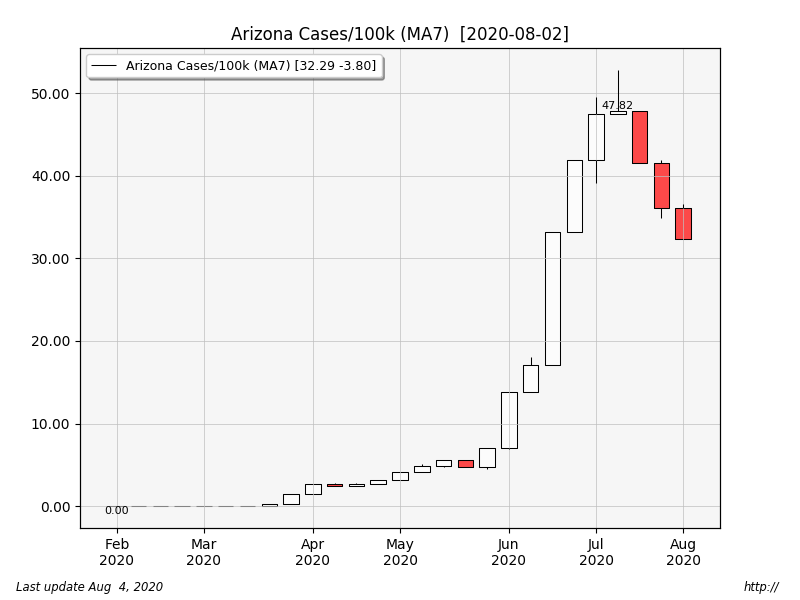 And now the AZ deaths have topped out, and are falling also, right on schedule. 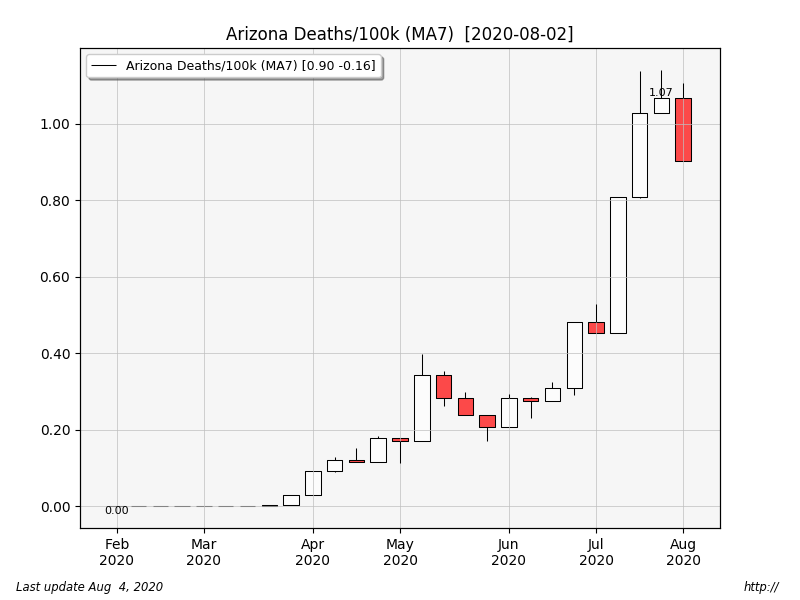 Perhaps the HHS is just eliminating duplicates which “got in there by accident”.  Perhaps because hospitals really enjoy getting that extra COVID revenue.  If someone dies with COVID nearby, hospitals get paid more.  Or so I’m told.  Like that motorcycle accident which was counted as a COVID death.

And of course there’s the election thing too.

With all the fake whistleblowers out there, I’m also going to guess that if outright data fabrication was going on at HHS, one of those “hose Trump” bureaucrats would lose not a moment in racing over to tattle on him to Schiff & Nadler.  Given the amount of fraudulent “whistleblowing” that happened, just imagine if they had a real cause of action?

My guess: the CDC is in the tank for Pharma.  Anything that scares the US population into hiding in their basements and waiting for the vaccine – which may not even work – is justified and fair game.  If anything, I suspect is the CDC’s numbers that are inflated.

After all.  That’s how the incentives all line up.  Bad news for us = good news for Pharma.

@epsilontheory on Twitter has been posting about the large drop in the numbers of test being run by some of these states including AZ and FL. He was talking about approx. 40% fewer tests being run compared to during the spike of cases. That’s one explanation for dropping case counts – “don’t test, don’t tell” also from Ben Hunt.

Here’s an on-the-ground report from an Arizona newspaper:

If the numbers were fake, then we would NOT be seeing this.

A spike.  That is exciting.

Silver took a nice pop this AM, gold train heading past the 2k station?

Any insights from the digital tea leaves?