Gold’s retreat started first in Asia, and it continued falling during London and early US trading, making the day low at about 11 am, after which gold bounced back for the remainder of the day. The spinning top candle was a bullish continuation, forecaster dropped, but remains in an uptrend. In spite of the drop, gold remains in an uptrend in all three timeframes.

Gold/euros fell -17.32 [-1.03%] to 1668.44 on moderate volume. The spinning top candle was a bearish continuation, forecaster dropped, but remains in an uptrend. Gold/euros is in an uptrend in the daily and weekly timeframes.

Well now, RSI-7 has dropped back to 82 – a modest improvement. Gold remains well above the 9 MA, and traders definitely bought the dip today after the initial $34 drop. There was even a reasonable amount of short-covering. First notice day is tomorrow for the former front-month contract GCQ20. It will be interesting to see just how much short-covering takes place in the next few days. Still no bearish reversal for gold.

The bad news is, the buck dropped hard today, and the plunge didn’t seem to help gold much at all. 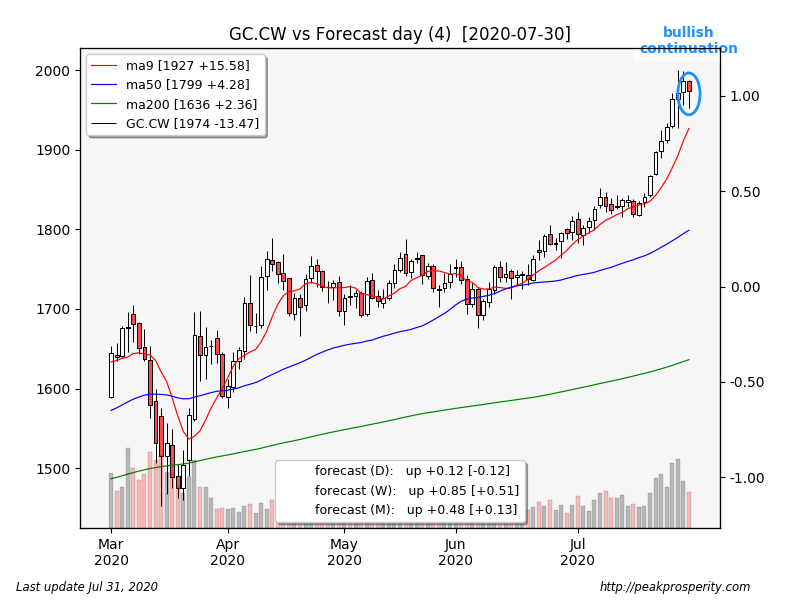 Silver fell off a cliff late in Asia, and then chopped mostly sideways for the remainder of the day, recovering some of its losses by the close. The long black candle was a bearish continuation, forecaster fell, dropping into a downtrend. Silver is now in an uptrend in the weekly and monthly timeframes.

There was a big increase in short interest in silver today, in sharp contrast to what happened with gold. The shorts have returned to silver. This is a bit of a danger sign. Forecaster wasn’t pleased either; silver is now in a slight downtrend. Silver remains above the 9 MA 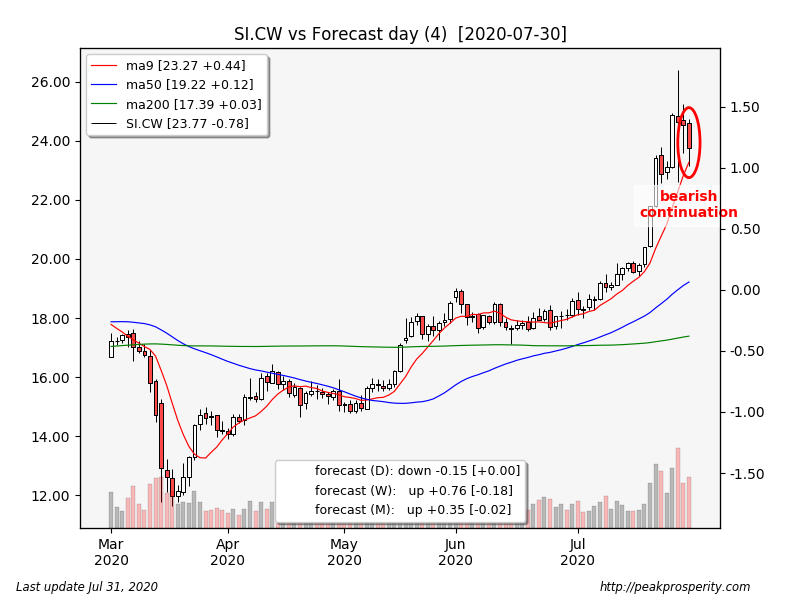 Miners gapped down hard at the open, rallied for the first 15 minutes, sold off hard again, and then bounced back, recovering at least some of the losses by end of day. GDX fell -3.48% on moderately heavy volume, and GDXJ plunged -4.38% on moderately heavy volume. XAU dropped -3.49%, the high wave candle was a reasonably strong bullish reversal (42%), but forecaster fell, dropping into a downtrend. XAU is now in an uptrend in just the monthly timeframe.

The candle print was surprisingly bullish – the high wave was highly rated – but forecaster was not happy at all, and even the weekly was dragged into a downtrend too. Miners are now below the 9 MA – they definitely appear to be the weakest of the 3 PM components. 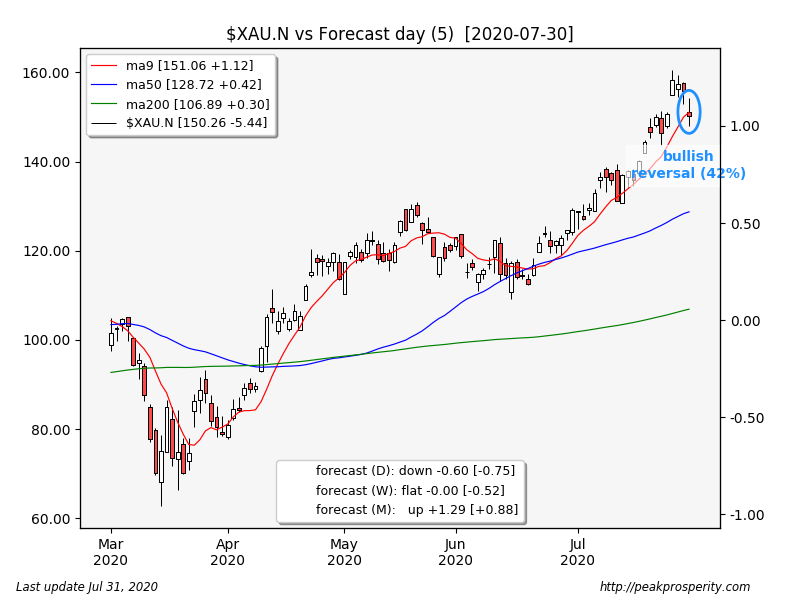 Copper fell -0.02 [-0.68%] to 2.91 on moderate volume. The hammer candle was a bearish continuation, forecaster fell, dropping into a downtrend. Copper is in a downtrend in both the daily and weekly timeframes.

Although price fell today, traders bought the dip fairly strongly. If copper is ready to correct, it doesn’t seem to be doing it very rapidly. Copper is now below the 9 MA, and is in a very weak downtrend. 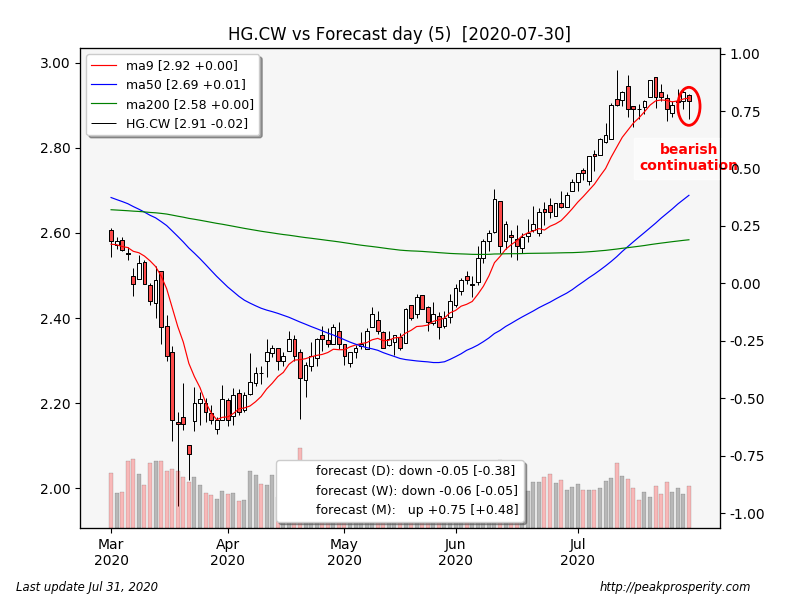 The buck plunged -0.42 [-0.45%] to 93.01 on very heavy volume. The spinning top candle was a bearish continuation, forecaster climbed, but remains in a downtrend. The buck is in a downtrend in all three timeframes.

So much for yesterday’s alleged bullish reversal. This is a new more-than-2-year high for the Euro. DX RSI-7=8, which is extremely oversold. The buck could reverse “any day now.” How many more of those days pass before the reversal actually happens is really anyone’s guess. And even the reversal might end up being “a process” rather than a V-shaped recovery. 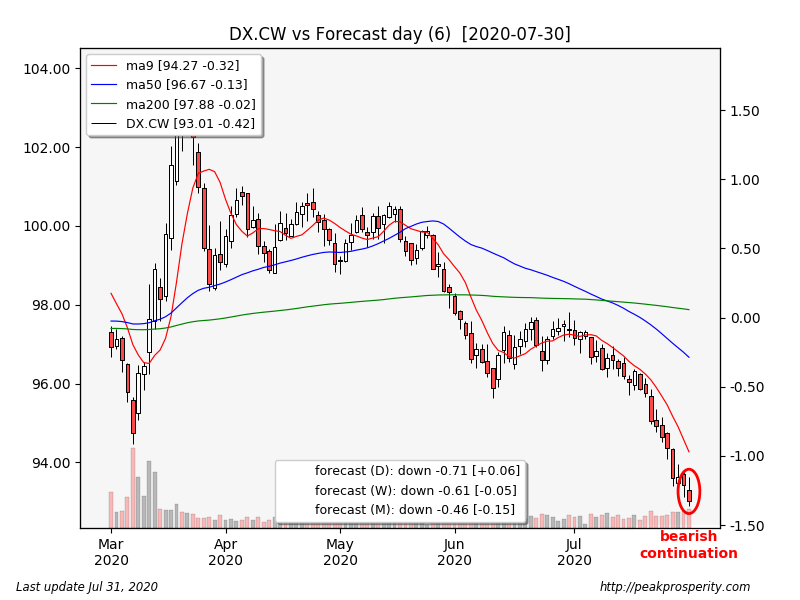 Crude plunged -0.96 [-2.32%] to 40.45 on moderately heavy volume. The confirmed bearish nr7 candle was a reasonably strong bearish reversal (48%), forecaster dropped, moving deeper into its downtrend. Crude is in a downtrend in all three timeframes.

It was a reasonably large trading range for crude – price hit an intraday low of 38.72 early in the US session, before bouncing back hard erasing much of the losses. Still, crude is now convincingly through the 9 MA; this could well be a real bearish signal for crude. Forecasters have been negative for a while; if “this is it”, crude might well drag SPX down along with it. 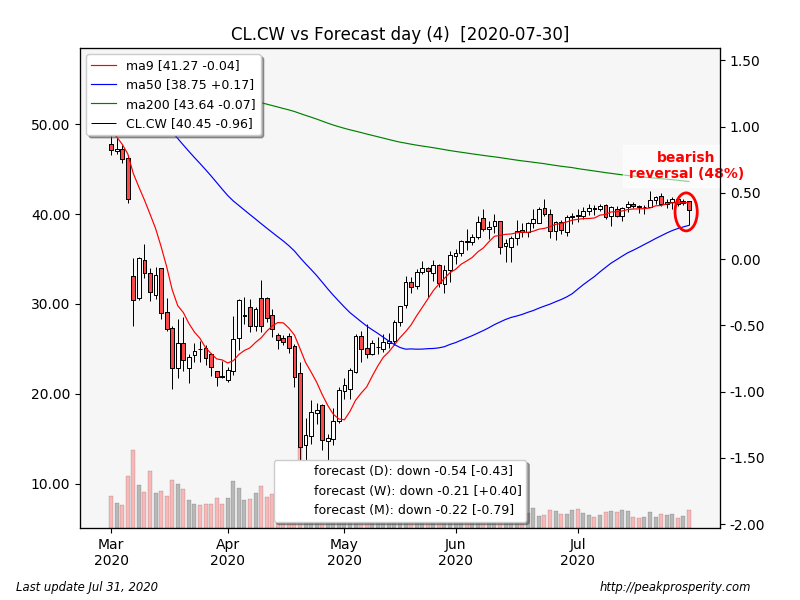 It looked to me as though equities sold off alongside crude, but then rallied as crude recovered. No bearish reversal for equities just yet. 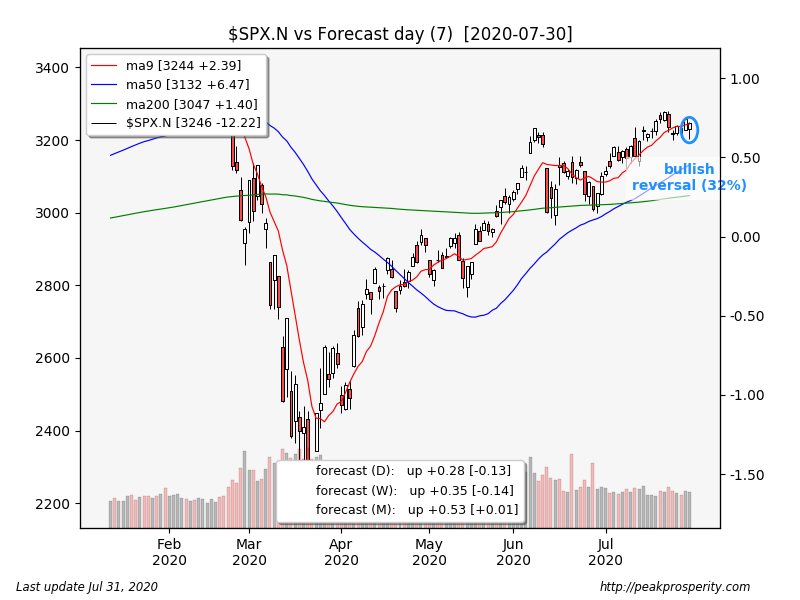 TLT climbed +0.66%. The gap up doji candle was a bullish continuation, forecaster climbed, moving higher into its uptrend. TLT is in an uptrend in the daily and weekly timeframes. The 30-Year yield fell -4.0 bp to +1.20%. New 3-month high for TLT.

TY climbed +0.15%. The long white candle was a bullish continuation, forecaster climbed, rising into an uptrend. TY is in an uptrend in the daily and weekly timeframes. The 10-Year yield fell -3.0 bp to +0.55%.

The 10-year is just 1 basis point from its all time low of 0.54%. The Fed continues to back up the truck in their treasury purchase campaign. How much does this financial repression end up pushing money into equities? Lots of organizations need yield – pensions, etc. They certainly can’t find it in bonds any longer.

JNK climbed +0.30%. The long white candle was a bullish continuation, forecaster dropped, but remains in an uptrend. JNK is in an uptrend in the daily and weekly timeframes.

That’s a new 5-month high for crappy debt. It is not supporting any sort of risk off mood. 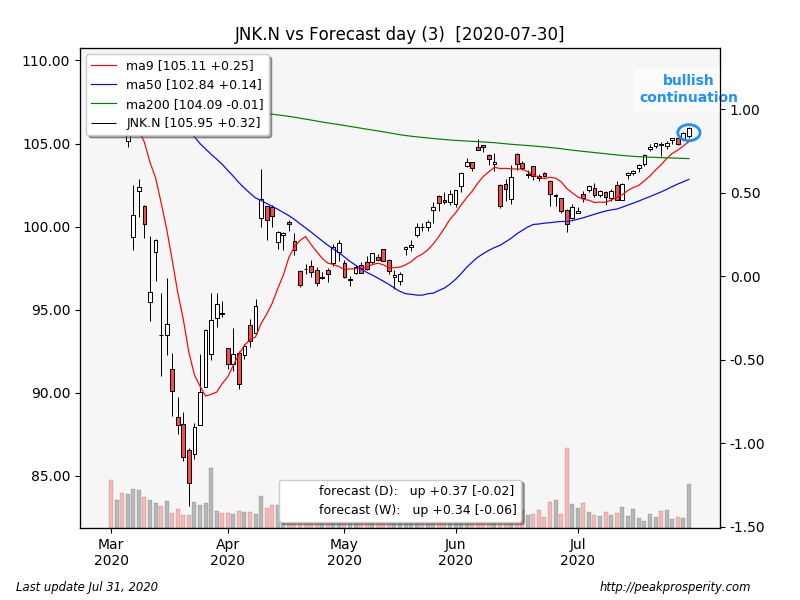 The GLD ETF tonnage on hand was unchanged, with 1242 tons remaining in inventory.

Physical ETFs remain in discount, despite the sell-off, and the silver bars continue to show a strong premium.

Platinum, palladium, and silver all sold off hard today, with the “other” metals hit the hardest. Both the miners and gold dropped too, but they fared a bit better. Traders seemed to be buying the dips in both gold and the mining shares.

Silver and gold had an interesting bifurcation today: gold saw a fair amount of short-covering, while silver saw a large increase in short positions. That probably accounts for the sharp difference in performance between the two metals.

I’m just guessing that the bankster gold shorts are a bit nervous going into first notice day for GCQ20, which happens tomorrow; while price did move lower in gold, I suspect that short-covering limited the size of that move.

Armstrong likes to say that a correction in a bull market lasts from 1-3 time units; 1-3 days if you look at the daily chart (and 1-3 weeks on the weekly). Today marks day #1 for gold, and day #3 for both silver and the miners.

As I view trading in Asia, I see gold having made a new all time high (!) to 2005 and change, while silver has rallied and has now erased most of yesterday’s drop. First Notice Day for GCQ20? I don’t know. Perhaps the last few days was just a short blip on the way to new highs.

There are some mixed signs from risk assets; crude is starting to look unhappy, with copper more neutral, and risk-on signs from SPX and crappy debt.

The buck – no sign of a low yet. It is horribly oversold, and it should rally any day now. But when I say that, I remember that line from my trader friend: “sometimes oversold gets oversolder, then moves into oversoldest. And then it goes down some more.” This is why we don’t blindly buy at low RSI values, and – also – why we don’t blindly sell at high RSI values. Sometimes things really are different this time. That’s how the “all time low RSI” values get set. Literally, that’s where we are today – the lowest RSI-7 value ever for the buck. And still no sign of a low.

It really could happen any day now though.

Cases in Arizona, Texas, and Florida continue to fall. Deaths are now dropping materially in Arizona too. Nationally, cases continue to edge lower. It appears to be a slow process. Will it finish by September?

Its easier to spot when you see it as a candlestick chart, since the candles make time boundaries visible, as well as movement. Note: the following chart has data only through 7/29 – the last candle is a partial candle, and will only complete this Sunday. 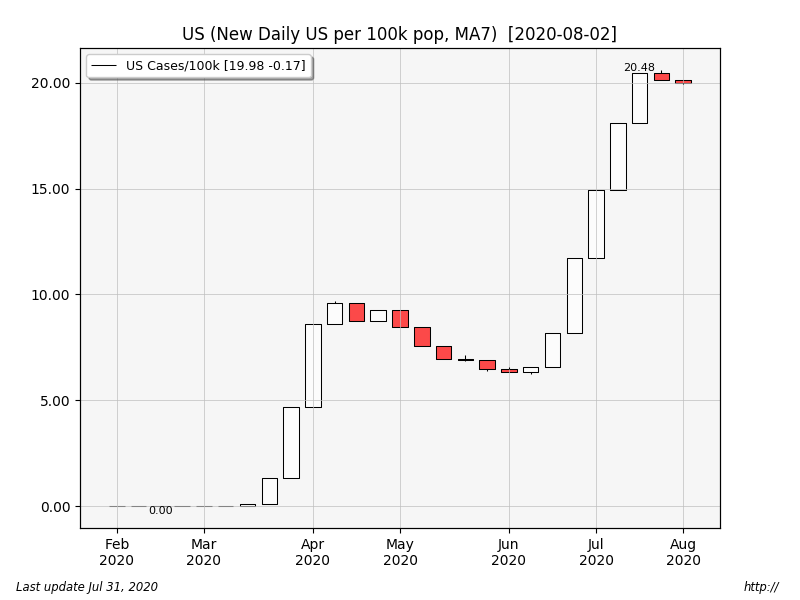 Again – I know, I know – I’m talking again about the Comex default that never happens and is never gonna happen!

August is a tame month for gold and nothing ever happens.  Ever.  September and December are *&always* the hot months for contracts. 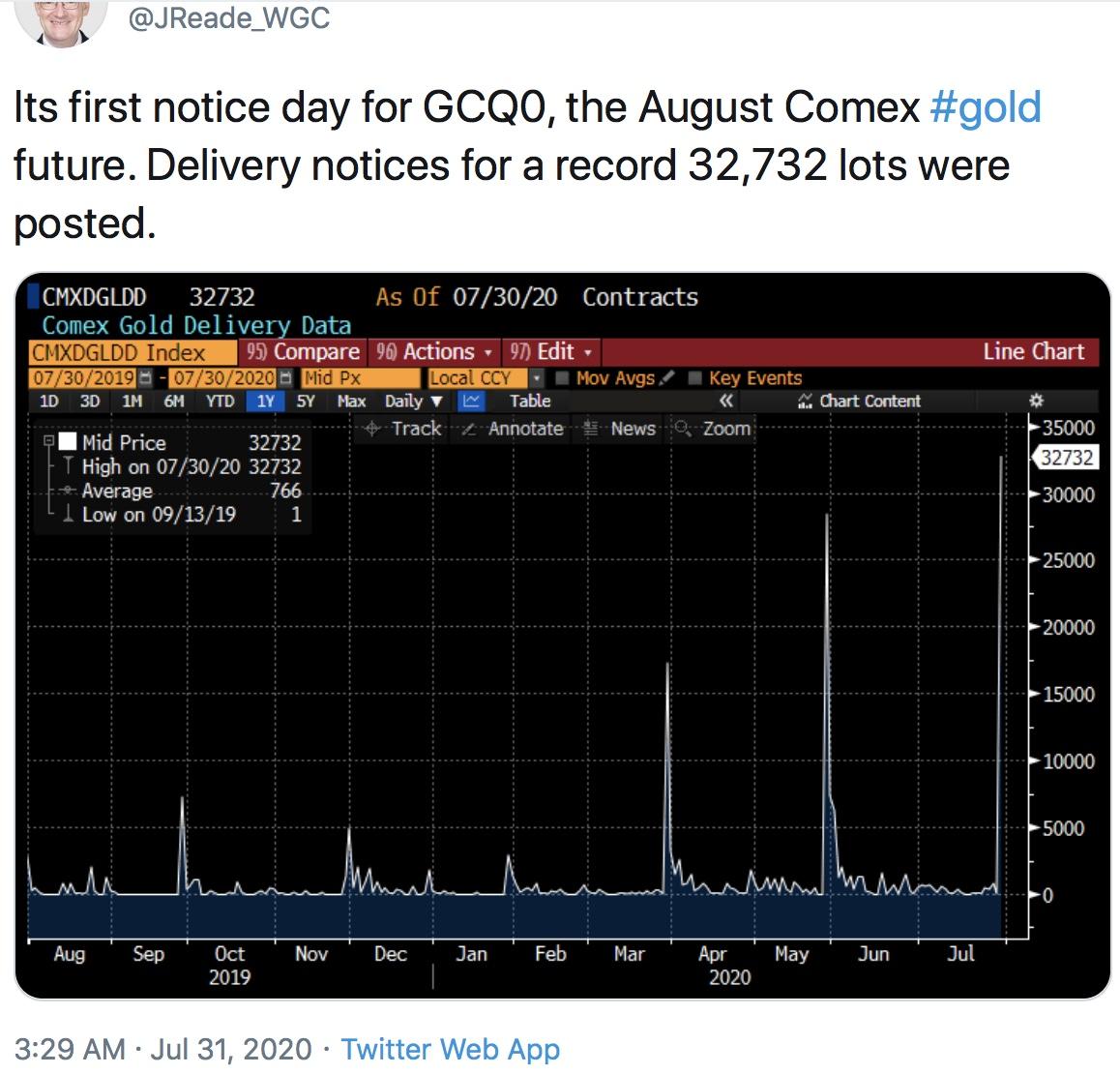 A record amount of first notices stood for delivery.  In A.U.G.U.S.T.

My friends, that is very notable!  As in, this time may be different.

Long ago Jim and I would argue about this very issue.  There was no real evidence before.  Now things are lining up.  The unusual movements in open interest, the lack of shorting on the rallies, all adds up to a very nervous set of banksters at COMEX.

We even saw the commercials spending yesterday covering – just $30 from the high.

I didn’t have the data on how many people were standing for delivery; its great to have confirmation.

It is different this time, primarily because everyone is behaving differently.

Something is in the air.

I’m 90% sure that I’m just fooling myself, again, but I too think something is different.

Despite overwhelming evidence to get the heck out, I stood firm during the miner call option bloodbath yesterday. I even bought a couple more longer dated options on silver miners.

Personally, it can be hard to deal with these bipolar markets. Euphoria one day, crushed the next.

I appreciate having this forum as a therapy group, lol.

My name is Jeff and I am a goldaholic….

Yeah FWIW I closed my covered calls this AM – made a little bit – but it just looks like things are headed higher.  At least for now anyway.