Financial writer John Rubino says gold is at new all-time highs, silver is vaulting upward and there is no end in sight for the massive money printing around the world.  Rubino say’s if you look deeper, you can see the “real message” in the unfolding events.  Rubino explains, “It’s fun to be a gold bug and see your stacks getting more valuable, but the real message here is the world is on the verge of spinning out of control.  That’s what gold and silver are signaling.  We’re just a mess with no way out of this because even before the pandemic hit, we were running deficits in the U.S. of a trillion dollars a year.  That is an emergency level of government borrowing, but we were doing it in the 10th year of a recovery or expansion.  Normally, everybody is back at work, paying taxes, government debt goes way down and sometimes it even turns into surpluses, but that wasn’t happening this time, which is a sign the monetary experiment that began in 1971 when we went off the gold standard and went to all fiat currencies everywhere was ending.  We are no longer able to manage economies with this much debt just by printing new currency and borrowing more money.  The system was going to break down anyway, but the pandemic has come along and accelerated the process.”

Rubino goes on to say, “So, now people ask:  Is there a pain free way of getting out of this and getting back to normality?  And the answer is probably no.  We have to get rid of this debt somehow.  I think the global debt to GDP is in the 350% to 400% range, which is the highest ever.  We have never had a society that has borrowed this much money before.  Past societies have seen their monetary system breakdown before they got to this point.  So, we are now an historical outlier as to how much debt we have taken on. . . . This means when all this debt gets wiped out, this might be historically worse than anything we have seen in the past.”

Rubino predicts, “We don’t have a tool to fix this if the dollar starts to fall.  That is the end game scenario in the financial system.  When the world’s reserve currency starts to lose value and the central bank that’s managing it doesn’t have any way to stop it, then, basically, everything falls apart everywhere. . . . When it happens, the early stage of it will feel like the past few months here.  I am not predicting we are heading straight to a dollar collapse or a fiat currency collapse, but when it happens, it’s going to start feeling a lot like it is now.”

In closing, Rubino says, “The reason why so many groups are so angry right now is because the system no longer works for most people.  We have an aristocracy that is harvesting the rest of us.  1% of the population gets richer and richer year after year at the expense of everybody else.”

Rubino says look for corrections in the gold and silver markets that will be “pretty scary” but adds, “This is a buy the dip market . . . . The long term trend for gold and silver are in place, and nothing is going to stop them short of their ultimate fair value.”

A reminder to continue to move paper assets into primary wealth.

Ha! Thanks for that warning, lol.

I like Rubino, but I have zero concern that the dollar will fail anytime soon. He is right on about the monster debt problem.

I’m a little more concerned about this graph, however. 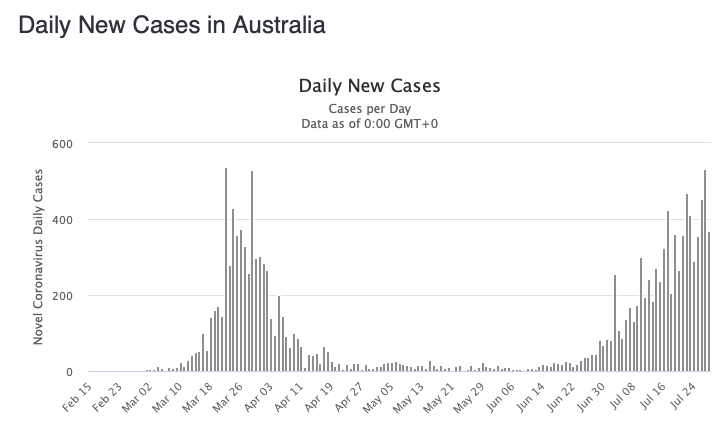 Chris made an appearance on Mike Maloney’s channel; worth a watch to hear his thoughts on recent PM action.