Most of gold’s gains came in Asia; gold chopped sideways for the remainder of the day, but it did close at the highs. The opening white marubozu candle was a bullish continuation, forecaster dropped, but remains in an uptrend. Gold is in an uptrend in all three timeframes.

Gold/euros climbed +13.35 [+0.81%] to 1670.42 on extremely heavy volume. The belt hold candle was neutral, forecaster dropped, but remains in an uptrend. Gold/euros is in an uptrend in all three timeframes.

Gold blew through the previous all time USD high in both spot and front month futures today; volume at COMEX was very heavy, and there was little sign of shorting on the rally. Today’s +5k contracts was nothing; remember BRExit was a +50k increase-in-short-interest day. (It was literally a round number: 50,000 contracts). RSI-7=91, which is extremely overbought. Can it go higher? Sure; all time RSI was in 1980, at 97. 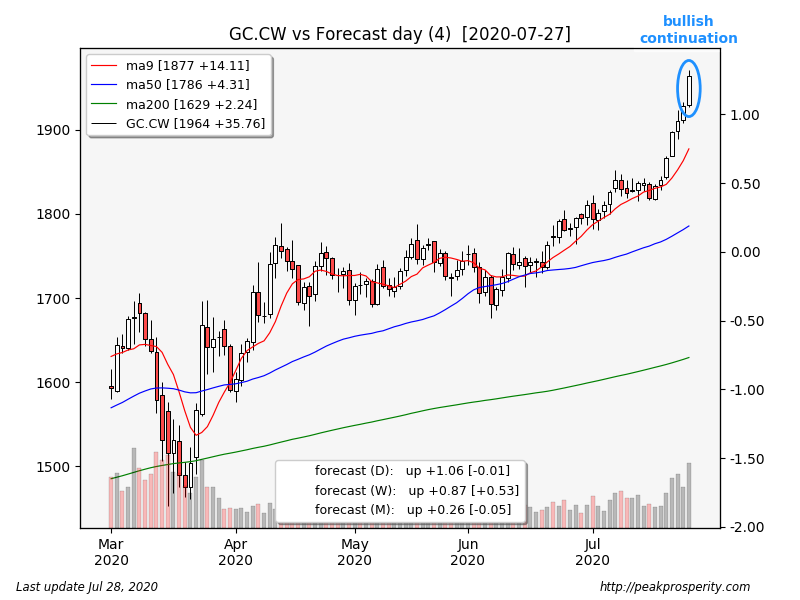 Much of silver’s gains came in Asia, but silver continued to move higher throughout the day, and it closed at the highs. The white marubozu candle was a bullish continuation, forecaster climbed, moving higher into its uptrend. Silver is in an uptrend in all three timeframes.

The gold/silver ratio dropped -4.53 to 78.93. Incredibly bullish. Silver continues to catch up to gold. 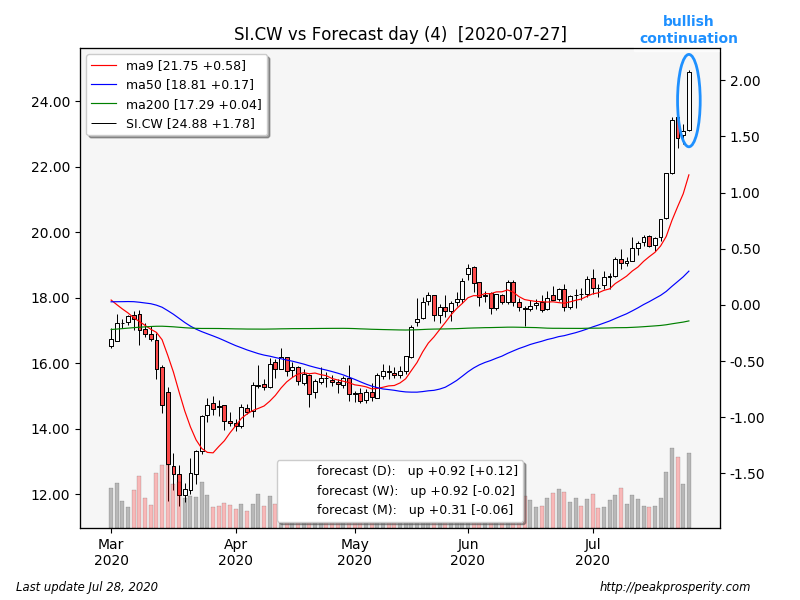 Miners gapped up big at the open – that’s where most of the day’s gains came from. GDX moved up strongly, +4.81% on extremely heavy volume, and GDXJ screamed higher, +5.78% on very heavy volume. XAU rallied +4.99%, the opening white marubozu candle was a bullish continuation, forecaster climbed, rising into an uptrend. XAU is in an uptrend in all three timeframes.

Miners are finally looking better; RSI-7=81, which is overbought, but not dreadfully so. The mining companies are going to be making an embarrassingly large amount of money this quarter, assuming these prices hold. The combination of low energy prices, and high product prices means happy days for the mining companies. It doesn’t get any better than this. 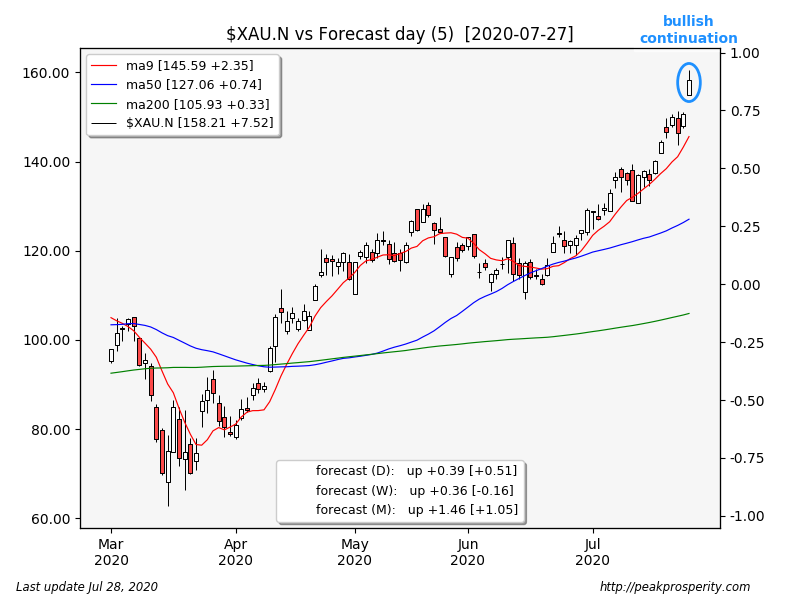 ically elevated, I mean it has never been above 2 before 2020. Platinum remains the most underpriced of all PM items, even after the recent big move higher.

Copper inched up +0.01 [+0.35%] to 2.90 on moderate volume. The long white candle was unrated, forecaster dropped, moving deeper into its downtrend. Copper is in an uptrend in the weekly and monthly timeframes.

Copper remains below the 9 MA, and while it is in a downtrend, price has barely moved off the highs. Copper does not look like it is in any hurry to correct. 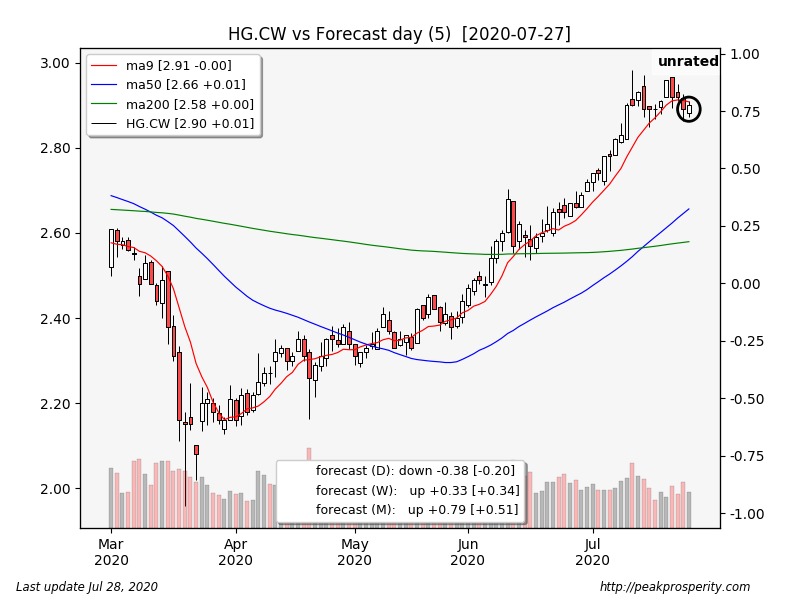 The buck dropped -0.76 [-0.81%] to 93.61 on heavy volume. The opening black marubozu candle was a bearish continuation, forecaster dropped, moving deeper into its downtrend. The buck is in a downtrend in all three timeframes.

Money continues to flee the buck; Euro remains the go-to currency. This is the highest the Euro has been since mid-2018. EUR/USD RSI-7=96 (!), DX RSI-7=9. Both are extremely extended. This is the second-highest RSI for the EUR/USD in history. 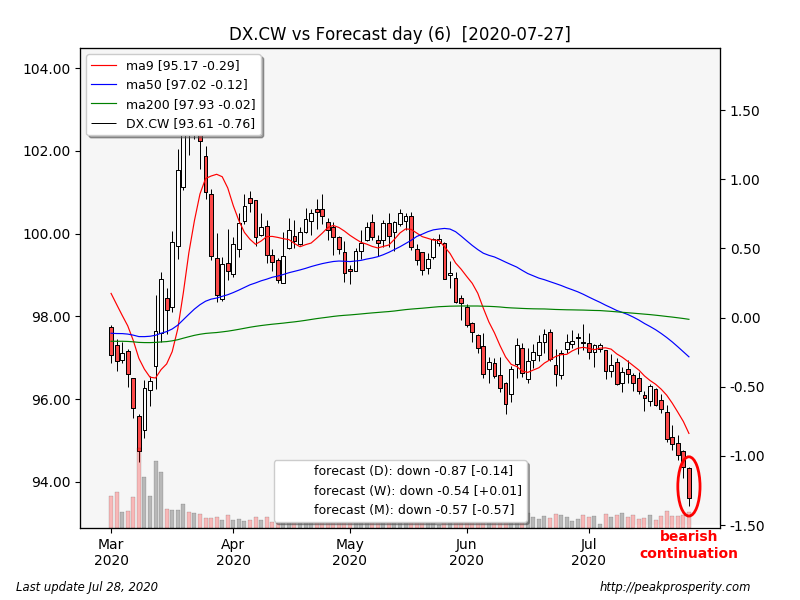 Crude moved up +0.35 [+0.85%] to 41.71 on moderate volume. The long white candle was neutral, forecaster climbed, moving higher into its uptrend. Crude is in a downtrend in both the weekly and monthly timeframes.

Crude is now back above the 9 MA; in spite of the evil eye from my forecasters, crude continues to slowly – very slowly – move higher. 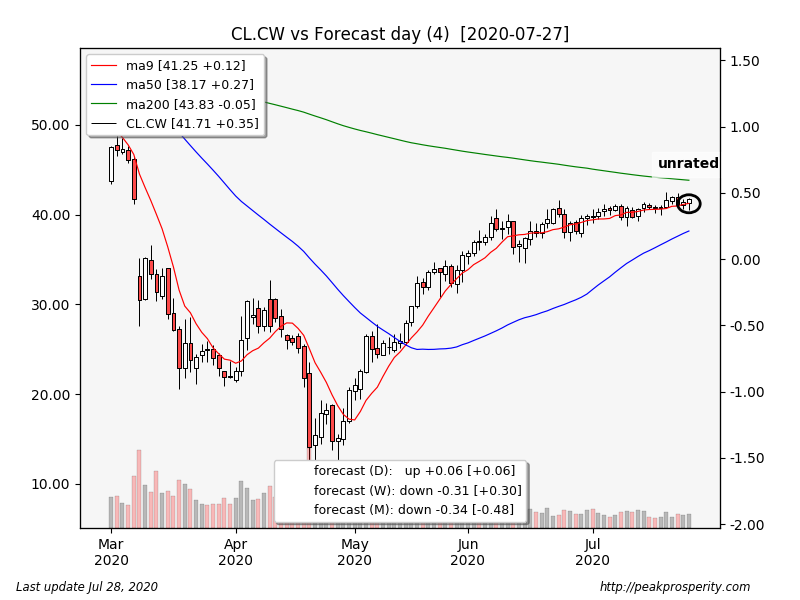 SPX climbed +23.78 [+0.74%] to 3239.41 on moderate volume. The short white candle was neutral, forecaster dropped, moving deeper into its downtrend. SPX is in an uptrend in the weekly and monthly timeframes.

SPX managed to inch back above the 9 MA today. While the candle print was not particularly bullish, equities – like copper – are not showing any signs of breaking lower, in spite of the downtrend. 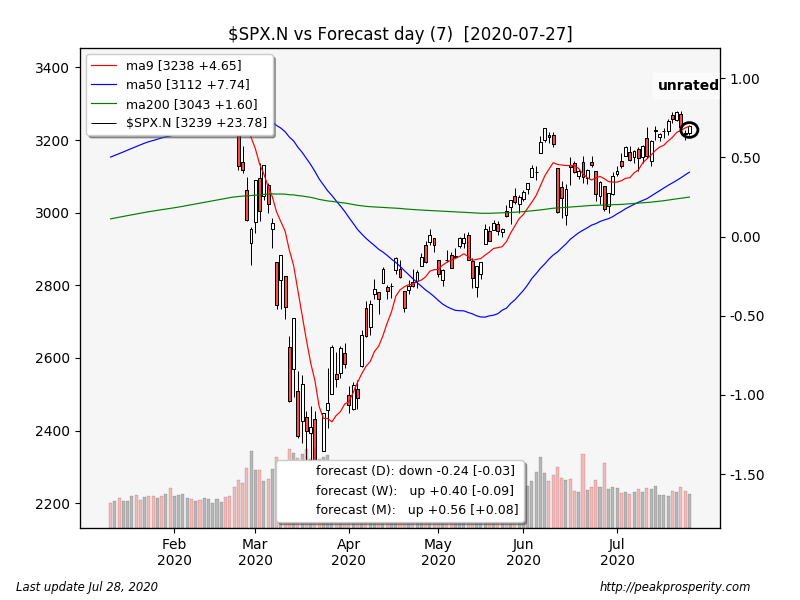 TY dropped -0.12%. The swing high candle was neutral, forecaster fell, dropping into a downtrend. TY is in a downtrend in both the daily and monthly timeframes. The 10-Year yield was unchanged at +0.59%.

The 10-year futures dipped below the 9 MA today. Does it mean anything? Not yet.

JNK climbed +0.26%. The spinning top candle was a bullish continuation, forecaster climbed, moving higher into its uptrend. JNK is in an uptrend in the daily and weekly timeframes. 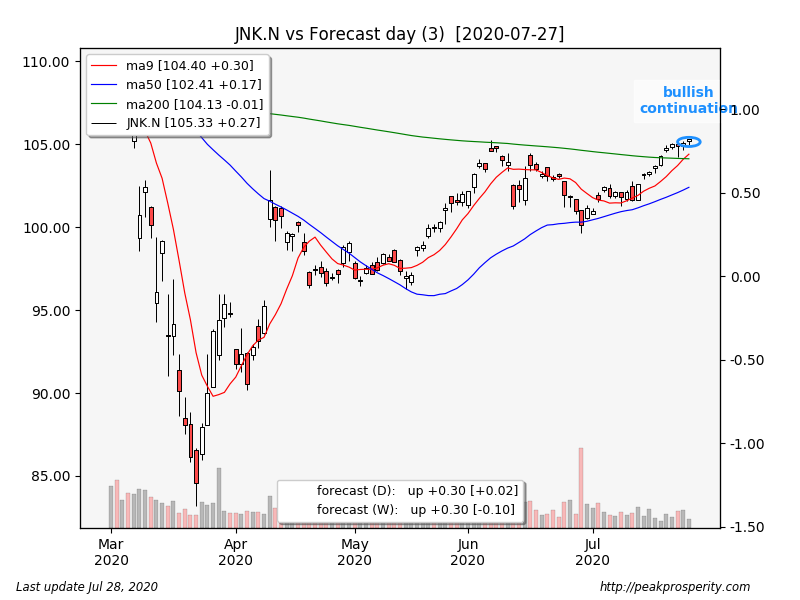 The GLD ETF tonnage on hand climbed +5.84 tons, with 1235 tons remaining in inventory.

Today, gold closed convincingly above the previous all time high set back in 2011. What’s more, there was no shorting apparent on the breakthrough – not in gold, nor in silver. Even the miners did well today, at least for the most part. And that gold/silver ratio has dropped to 78, falling an unbelievable 45 points from the pandemic lows set back mid-March.

That’s called a “reversion to the mean” trade, and boy has it paid off. Anyone buying silver in mid-March is up…what…100%? That’s better than a poke in the eye with a sharp stick, as they say.

However, I’m probably at peak-smugness right now, and we should interpret such an excess of emotion as a definite warning sign. Whenever we get too full of ourselves, that often marks a near-term top. We saw that, in spades, in all the bitcoin folks – back at BTC=18,000. Emotions are great things to have in matters of the heart, but they are lethal in the market. Pride goeth before the fall, and no more so than at RSI values > 90.

Right. So I really do think the plunging dollar is a big part of the current PM move – it is not only supercharging gold/USD, but I believe it is also an artifact of “no safe haven” for big money; I don’t think they entirely buy “The Euro” as a safe haven currency.

Equities and risk assets overall show no signs of actually correcting, in spite of the hints of a downtrend that started to form last week.

Cases are continuing to drop in Arizona, Florida, and now Texas; the uptrend has stopped in Alabama, Georgia, and California. I still believe we are on track for that September recovery, although deaths in Arizona have yet to reverse.

Fed meeting starts tomorrow, with the usual press conference on Wednesday at 2:30 pm.

As I write this, gold has continued higher, hitting 2000 (exactly) on the December contract, before getting pounded down $45 on a massive, high volume spike maybe 30 minutes later. Gold, silver and platinum were all hit at roughly the same moment. I suspect our shorts have returned – and just in time for that Fed meeting, too.

EDIT: and now, another $1.50 drop in silver, and a further $25 drop in gold; I think “someone” doesn’t want record gold prices ahead of that FOMC meeting happening tomorrow.

One wonders what Powell will say on Wednesday.

Yeah, sorry, I was smug yesterday. My apologies everyone.

After the beatdown the whole PM market took in the Spring, I’m just completely amazed to see the “other side” of the trade so soon after that carnage. I figured it would be years before we got back to where we were, let alone beyond it.

FWIW, you are a good teacher Mr. DF. I recognized my cockiness yesterday afternoon and sold my shortest dated call option on the miners and bought another Dec VIX call option.

I’m not so sure this strategy will work out, especially with the FUD (oops I mean’t FED) factor in the equation. The FED’s whole purpose is to squash the VIX and Gold. The Fight-The-Fed portfolio is doomed, eventually.

Gold & silver have had a nice recovery from the pounding that happened earlier.  We will have to see where we close.

Likewise, it will be instructive to see how the metals respond to the FOMC press conference tomorrow.

When I read your posts (they are so thorough!) you almost always mention the silver-gold ratio and then indicate whether the ratio is bearish or bullish. Bearish or bullish for which? Silver or gold or both?

For example, today: “The gold/silver ratio dropped -4.53 to 78.93. Incredibly bullish. Silver continues to catch up to gold.”

Sorry for being so dense!

Yes, I believe a falling gold/silver ratio is bullish for the PM complex overall.

That’s because, in a “PM bull market”, silver tends to lead gold.  Miners tend to lead the metal.  This is “risk on” for PM.

And so a falling GSR = silver leading gold.

The harder GSR drops, the stronger the PM bull market tends to be.

If gold outperforms silver, it’s a “safe haven” move and they tend not to last too long.

If silver outperforms gold, that’s an overall PM bull market, and those can last for quite a while.

Just one lens to view things.  If you are looking for an overall PM bull market, you want miners > silver > gold.

What’s the latest from sentiment trader?  Any sense on the put call ratio?

Forecaster is pointing lower for SPX, but…we are only seeing a mild move lower in prices, and I don’t see copper selling off, and crappy debt still looks sort-of ok.

We had a bad close today for SPX, but – does it mean anything?

A very succinct and helpful response Dave! Thanks a lot!

wrote, “Jp Morgan and HSBC have blacklisted the Perth Mint for using blood gold from PNG. The attacks to discredit gold have started”

I’m not aware of the back-story on the possible “blacklisting”. Makes you wonder though if the outage is just a coincidental technical glitch or the result of a purposeful cyberattack.

With the spot price and premiums of gold and silver going through the roof the past few days, along with supply shortages, it may be possible that the site just couldn’t handle the high volume of visitor traffic.