Gold chopped sideways in Asia, moved a bit higher in London, and then rallied starting at the open in New York, hitting a new high just before noon. The spinning top candle was a bullish continuation, forecaster dropped, but remains in an uptrend. Gold is in an uptrend in all three timeframes.

Gold/euros climbed +5.90 [+0.36%] to 1646.21 on extremely heavy volume. The spinning top candle was a possible bearish reversal (34%), forecaster dropped, but remains in an uptrend. Gold/euros is in an uptrend in all three timeframes.

[According to my calendar-weighted futures prices, today was a new all time closing high for gold/USD – but not a new all time high – it missed that by a few pennies. I looked at my code yesterday; a contract roll is scheduled within the next day or two, and the new front month will be the low-volume GCV20 (October) – so my code skips that one for the higher volume December gold (GCZ20).] 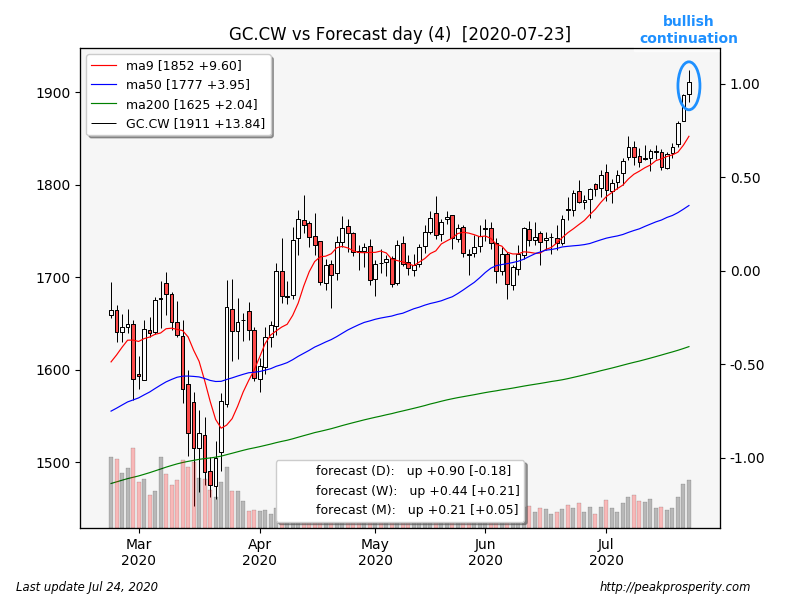 Silver made a new high in Asia (23.67) almost immediately, but then spent the rest of the day chopping lower. The long black candle was a bullish continuation, forecaster dropped, but remains in an uptrend. Silver is in an uptrend in all three timeframes.

Well now, no reversal candle, and RSI-7=81, so that takes some of the pressure off. While forecaster was unhappy, the shorter term uptrend remains strongly in place. No bearish reversal for silver today. That’s a bit of a surprise, but that’s what my code is telling me. In fact, it is exactly for times like this that I wrote all this code. It is an emotionless, neutral observer that gives me its considered opinion during times of stress. 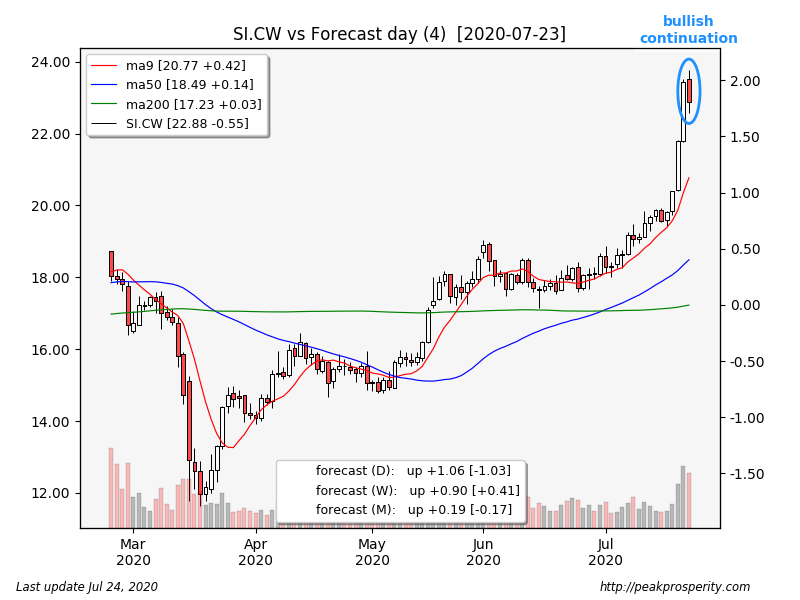 GDX dropped -1.89% on heavy volume, while GDXJ plunged -3.19% on heavy volume. XAU moved down -2.34%, the long black candle was a reasonably strong bearish reversal (43%), forecaster fell, dropping into a downtrend. XAU is still in an uptrend in the weekly and monthly timeframes.

Unlike silver and gold, the miners may have tipped over into a downtrend today. The single-candle pattern was highly rated, and bearish, and forecaster dropped too – although the projected downtrend is still very mild. XAU remains above the 9 MA, however, so this move remains tentative. RSI-7=68, which is no longer overbought. Call the miners, “on the fence” right now. 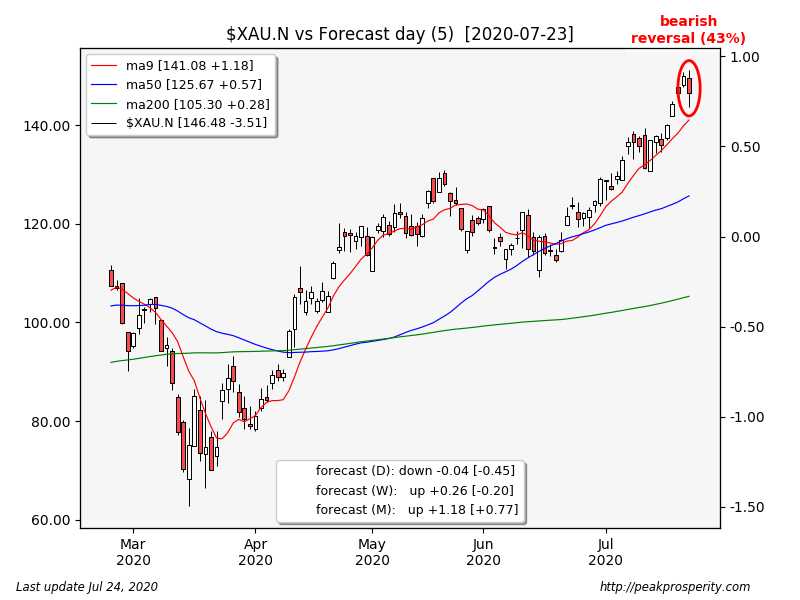 Copper was unchanged at 2.92 on moderately light volume. The spinning top candle was unrated, forecaster fell, dropping into a downtrend. Copper is in an uptrend in the monthly timeframe.

This might really be it for copper this time. Maybe. 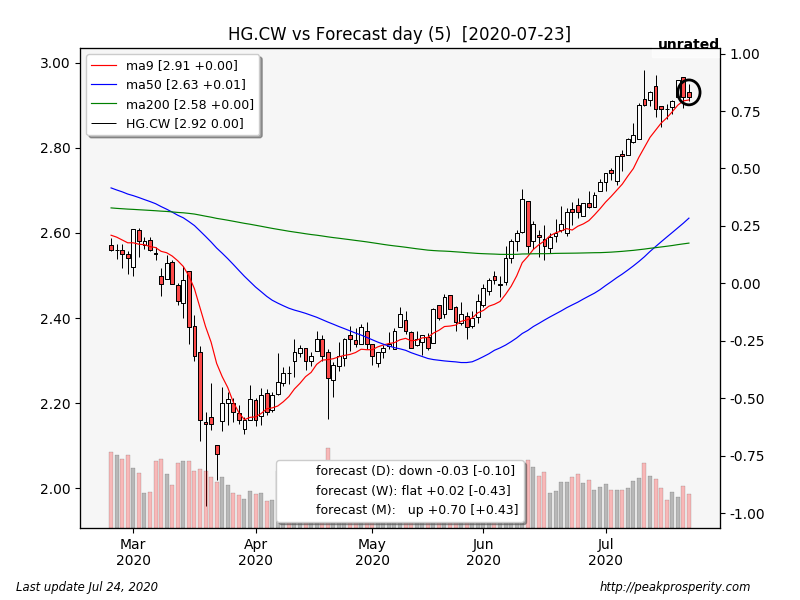 The buck dropped -0.28 [-0.29%] to 94.64 on moderate volume. The long black candle was a bearish continuation, forecaster climbed, but remains in a downtrend. The buck is in a downtrend in all three timeframes.

The RSI-7=15 now for the buck; that’s definitely oversold. Still no bottom yet for the buck. 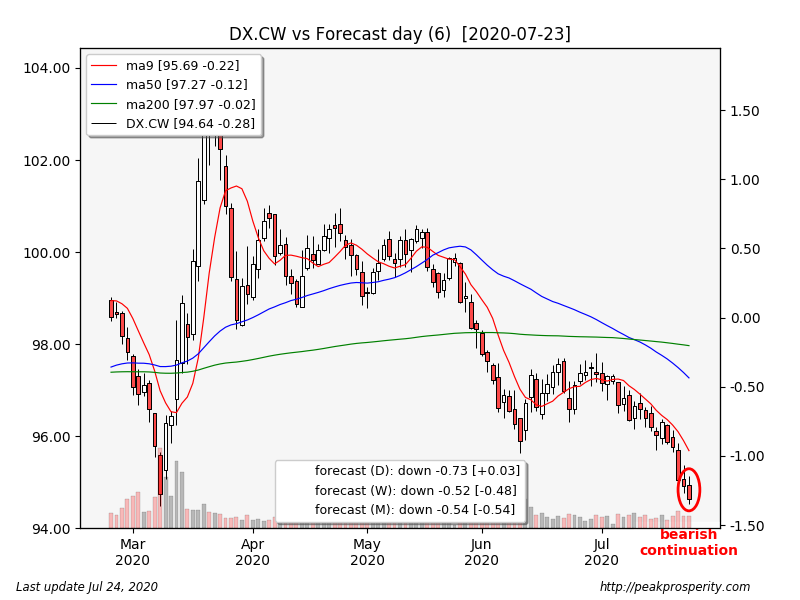 Crude plunged -0.83 [-1.98%] to 41.08 on moderate volume. The long black candle was a reasonably strong bearish reversal (43%), forecaster fell, dropping into a downtrend. Crude is in a downtrend in both the daily and weekly timeframes.

While crude remains above the 9 MA, short & medium forecasts are pointing lower, and today’s candle print was bearish too. Both copper and crude are pointing lower now – they haven’t actually moved much, but the tea leaves are coming up “bearish”. 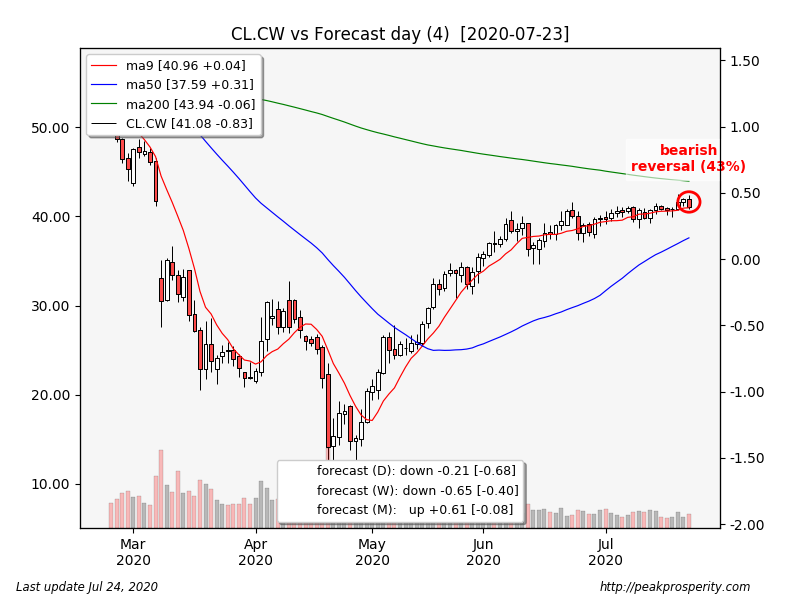 SPX fell -40.36 [-1.23%] to 3235.66 on moderate volume. The long black candle was a low-percentage bearish reversal (28%), forecaster fell, dropping into a downtrend. SPX is in an uptrend in the weekly and monthly timeframes.

Normally this very mild reversal candle wouldn’t be enough for me to make a bearish call (what with SPX remaining above the 9 MA and all) – but now crude and copper are both pointing lower also. If we do reverse, I’m guessing the commodities are going to lead. So I’m cautiously bearish on SPX. 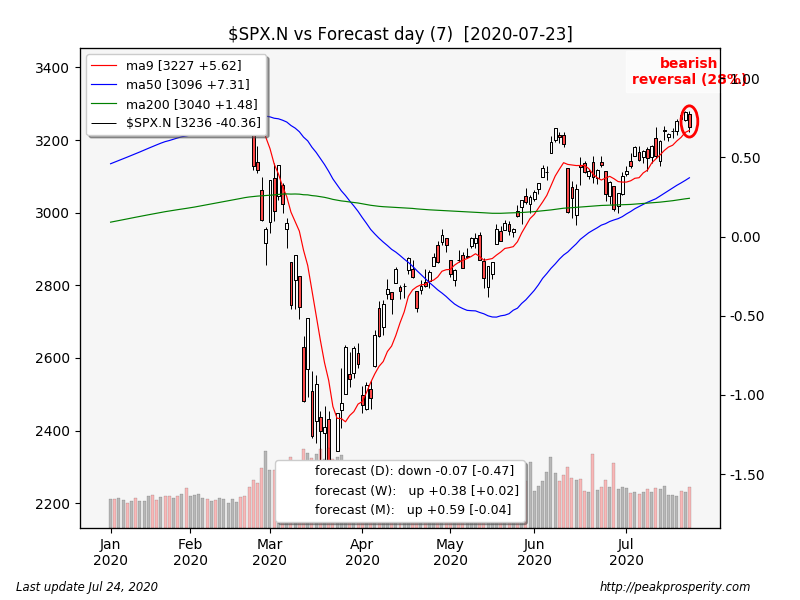 TLT rallied +1.17%. The long white candle was a bullish continuation, forecaster climbed, moving higher into its uptrend. TLT is in an uptrend in the daily and weekly timeframes. The 30-Year yield fell -4.0 bp to +1.25%.

TY inched up +0.07%. The short white candle was a low-percentage bearish reversal (29%), forecaster climbed, moving higher into its uptrend. TY is in an uptrend in the daily and weekly timeframes. The 10-Year yield fell -2.0 bp to +0.58%.

JNK dropped -0.15%. The takuri line candle was neutral, forecaster dropped, but remains in an uptrend. JNK is in an uptrend in the daily and weekly timeframes.

No reversal for crappy debt.

The GLD ETF tonnage on hand climbed +2.04 tons, with 1227 tons remaining in inventory.

Physical silver remains in premium, kilo bars are back, and the physical ETFs remain in discount.

Depending on your “price of gold”, the yellow metal either made a new all time closing high today (Dec 2020 futures) or is simply approaching a new all time high (spot). Uptrends remain in place for both metals in spite of silver’s brisk sell-off, while the miners are starting to look weaker and may be about to reverse.

As gold approaches (or surpasses) the all time highs, there is very little shorting going on. Nobody is “capping price moves” anymore. Who could have predicted this outcome? Not me, certainly. Could this be a “new normal” for the PM market?

Fed money printing continues; although the totals didn’t change much, the Fed continued buying Treasurys [+13B] and MBS [+22B].

Crude, copper, and SPX all had bad days – it was classic risk off – and the equity sector map was quite bearish also.

Perhaps an odd sort of leading indicator is TSLA: it reported fantastic earnings of $2.18/share (best case PE: 183) after the bell yesterday. It then promptly spiked up $100 in the after market, gapped up at the open today, and then sold off hard all day long today, a classic “sell the news” event; it printed an opening black marubozu: 47% bearish reversal.

What caused the sell-off? Perhaps calls for a second Shelter In Place order in California.

Cases & deaths continue to drop in Arizona, down 6.9% today to 37.8/100k, down 30% from the highs set just two weeks prior. Deaths in AZ appear to be chopping sideways; they are no longer increasing. In Texas and Florida, cases have stopped moving higher, while California cases are still moving up, but they appear to have slowed substantially.

Assuming we can trust the numbers, things still appear to be on target for a September herd immunity outcome. But we are not there yet, and California is lagging a bit behind the others.

I’ll leave you with this. In a possibly-amusing twist of fate, the partially defunded and “structurally racist” police in CA are now being asked to enforce the not-so-universally-popular “mask-wearing” rules.

Sgt. Ray Kelly, a spokesman for the Alameda County Sheriff’s Office, had this to say:
“Law enforcement as a whole is not jumping to go do this kind of work and have our communities get any angrier at us than they might already be,” he said. “We’re not interested in being the mask police.” 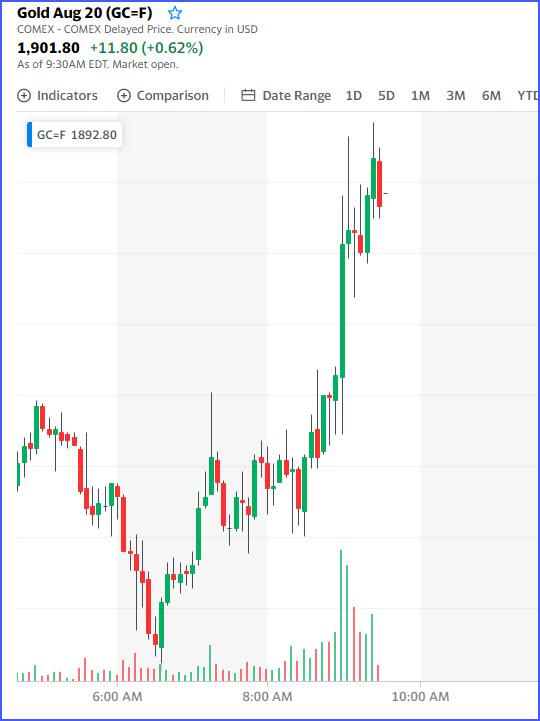 I happen to believe that the long-awaited Crimex default is a distinct possibility this year.  Supplies getting lower…we’re really just one solid delivery month away from that…

Yeah.  I think you are right about the default.  I used to … shall we say … give it little credence back in the day.

Nixon slammed the gold window shut for a reason – all the gold was leaving.  They will (probably) have to do the same thing at COMEX, for exactly that same reason.

I think PSLV/PHYS are the way to play this, from a trading account perspective.  They are a mini version of COMEX, as you can take delivery if you have enough shares.  Premium should explode higher on these items once COMEX stops delivering.

[FD: I’m long both of them for just this reason]

Are you still shorting the banking index?

I’ve heard several conspiracy theories lately about the last move for central banks (when QE no longer makes the rich richer) is to let the banks and their debt die and replace them with a digital currency.

You lost all the money in your bank accounts? Sorry, but here is credit for what you lost in our new FED digital currency. Of course there is a catch, if you don’t do what the politicians want we will penalize your balance.

Now that is a conspiracy theory worth discussing IMO (with no disrespect to Mr. Gates, lol).

How does one opt-out of such a scenario?

Bitcoin and gold seem like logical answers but they could really make it hard to actually capitalize on them. Seems like a low tech life might be a better option.

“Premium should explode higher on these items once COMEX stops delivering.”

I’ve been wondering about this too.   What would the exit strategy be though?   Presumably, people would start taking delivery of the physical metals and eventually the funds would be exhausted of metals and have to be wound down.   They won’t keep them open and trading ust for me and my 20 ounces right?

How does that actually play out though?   Is there a premium that gets higher and higher then suddenly you get cashed out at par?   Or do you somehow get that premium?

we sorta dropped out 25 yrs ago. Low tech Luddite. Our farm is happy. Am getting my blanching water up to a boil to start freezing Top Pick Pinkeye Purplehull Peas.

Oh sure.  My conspiracy theory (which theorizes that “formerly” sociopathic Bill Gates has probably not transmogrified into a kindly philanthropist) is nutty, while yours is worthy of some really serious consideration.  🙂

Yeah, still short the banksters.  The puts haven’t worked out, but the direct short isn’t hosing me too badly.  I added to them a few days back.  The defaults haven’t hit yet.  Maybe next month.  Or maybe 3.

Its hard to imagine that the Fed – a creature created entirely by and for the banksters – would end up throwing them under the bus.  Or, even the concept of the Fed having the power and authority and independence to throw them under the bus.

I have two hopes JAG. 1) The public is so enraged at the fiat dollar collapse that they violently refuse to accept the new digital fiat currency, which would force TPTB into the hated gold-backed currency (because that is their only other choice.) 2) Today’s bankers and other oligarchs are secretly protecting their wealth by accumulatin physical gold and silver. Since they will write the rules for the new system I assume they will incorporate loopholes that allow them to turn their gold and silver into new fortunes in the new system. If so, I’ll use the same loopholes to get rich right along with them.

I would opt out of the new digital currency system by refusing to accept it. I won’t sit peacefully by while I’m led into slavery. I’m not looking forward to the coming Collapse but I’m prepped with lead, gold and and silver. And when they come for me, they’ll get the lead first.

”Happy Hunger Games. And may the odds be ever in your favor,”

So what happens when there is a default?