Gold shot higher in Asia, chopped sideways for much of the rest of the day, then moved higher into the close. The white marubozu candle was a bullish continuation, forecaster climbed, moving higher into its uptrend. Gold is in an uptrend in all three timeframes.

Gold/euros rallied +21.71 [+1.34%] to 1640.32 on extremely heavy volume. The white marubozu candle was a bullish continuation, forecaster climbed, moving higher into its uptrend. Gold/euros is in an uptrend in all three timeframes.

This was a new all time high for gold/Euros. Gold is now starting to catch fire along with silver; in the old days, we’d say that silver was dragging gold higher – that’s what happens in a PM bull market. Today’s new gold shorts were only 25% of a BRExit, which isn’t all that much. At RSI-7=83; gold is starting to be overbought. 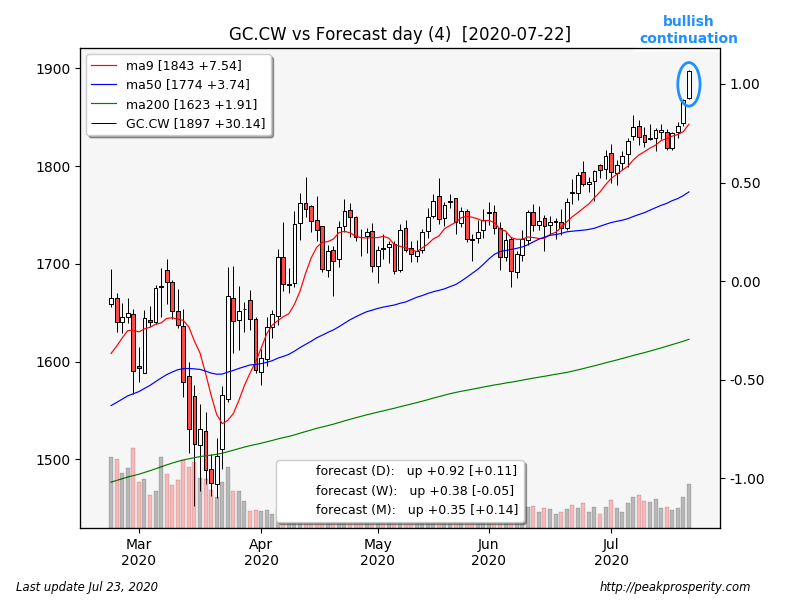 Silver shot higher early in Asia – more than $1 in a 2 hour period – plunged $1 again when Asia closed, then broke out to a new again at 8am, then plunged once more, then rallied steadily into the close, ending the day right at the highs. The strong line candle was a bullish continuation, forecaster climbed, moving higher into its uptrend. Silver is in an uptrend in all three timeframes.

This is another new 7-year high for silver. The gold/silver ratio is now in free-fall, and there was no increase in short interest. My guess: this is because the shorts tried to call the top intraday, twice, but were stopped out by the two strong, follow-on rallies. The RSI-7=93, which is extremely overbought. That said, silver does tend to do this during rallies. It could go higher still. The silver crazies are hard at work. Remember, I told you this would happen. If you are long, enjoy.

If you don’t have silver…do you feel like you are missing out? That goes along with RSI-7=93. If you are waiting to get onboard the train, these rallies feel like they will never end. 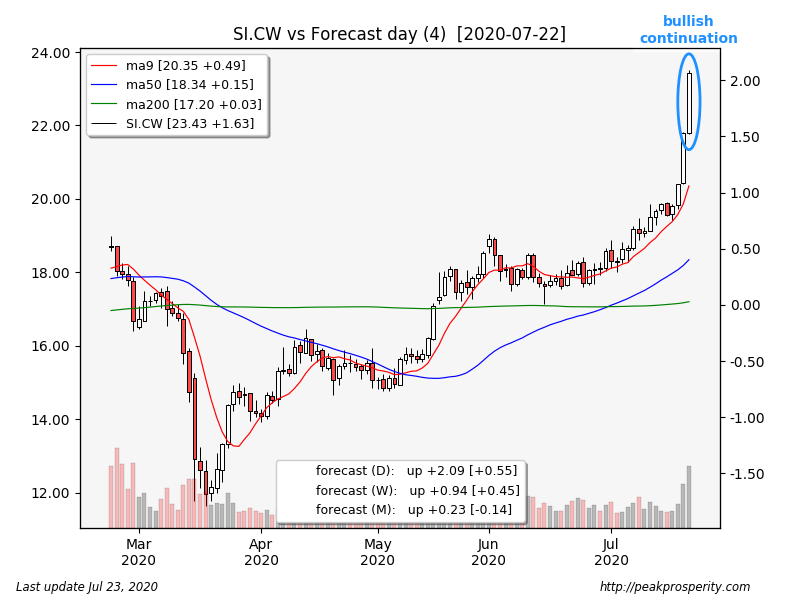 Miners gapped up at the open, and mostly just chopped sideways for the rest of the day, closing near the highs. GDX rallied +2.05% on heavy volume, and GDXJ moved up +2.85% on moderately heavy volume. XAU climbed +2.32%, the long white candle was a bullish continuation, forecaster dropped, but remains in an uptrend. XAU is in an uptrend in all three timeframes.

Given the ridiculously strong move in silver, and the strong move in gold, this was not a very exciting move by the mining shares. They did move higher, but it all seemed a bit reluctant. The silver miners did quite a bit better [SIL:+4.89%], but overall, the miners seem to be suggesting this rally may be nearing an end. RSI-7=82 for XAU, which is just somewhat overbought. 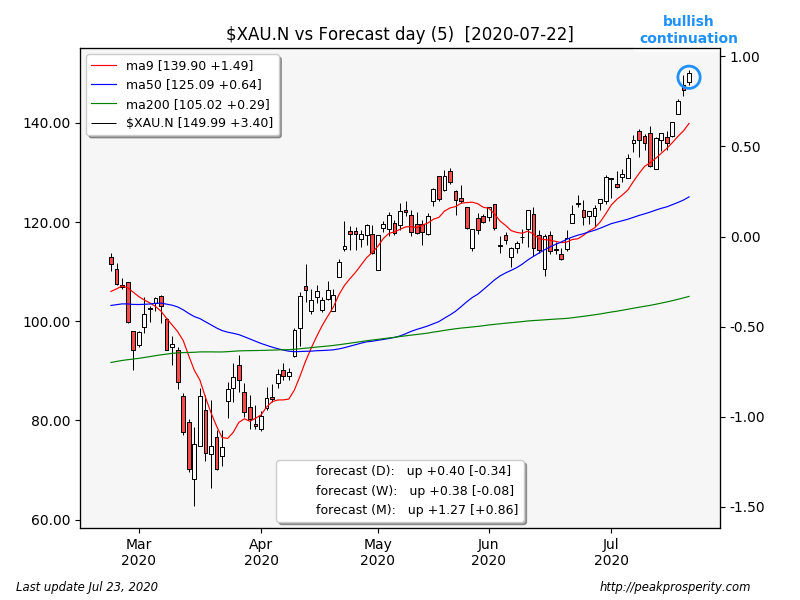 Copper fell -0.04 [-1.35%] to 2.92 on moderate volume. The opening black marubozu candle was a reasonably strong bearish reversal (48%), forecaster dropped, but remains in an uptrend. Copper is in an uptrend in the daily and monthly timeframes.

Is it really a bearish reversal for copper? We’ve seen a few of those, and they haven’t led to anything. Copper remains above the 9 MA, and it is still in an uptrend, although both daily and weekly forecasters are on the edge of a reversal. We will have to see tomorrow. The candle print was really quite bearish. 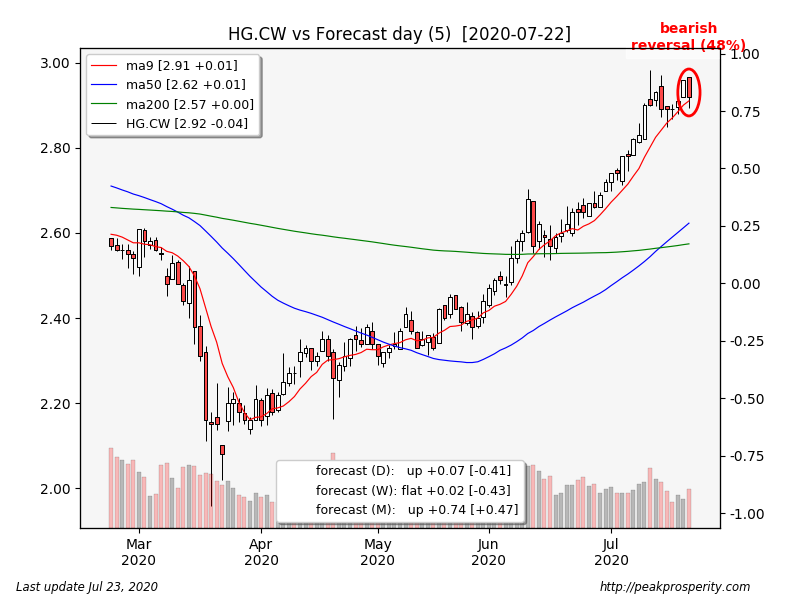 The buck inched down -0.13 [-0.14%] to 94.92 on moderate volume. The spinning top candle was a bearish continuation, forecaster dropped, moving deeper into its downtrend. The buck is in a downtrend in all three timeframes.

That’s a new low for the buck; downtrend remains strong. Mostly this is due to the Euro, which has staged an extremely strong rally over the past 10 weeks. RSI-7=90 for EUR/USD, which is strongly overbought. The buck’s RSI-7=18, which is oversold. Buck is near support right now; a reversal could happen soon. That said, price could break through support, or stage a dead cat bounce off support; the pandemic response, and its aftermath, is causing all sorts of stuff to happen. A break below support would be quite bearish. 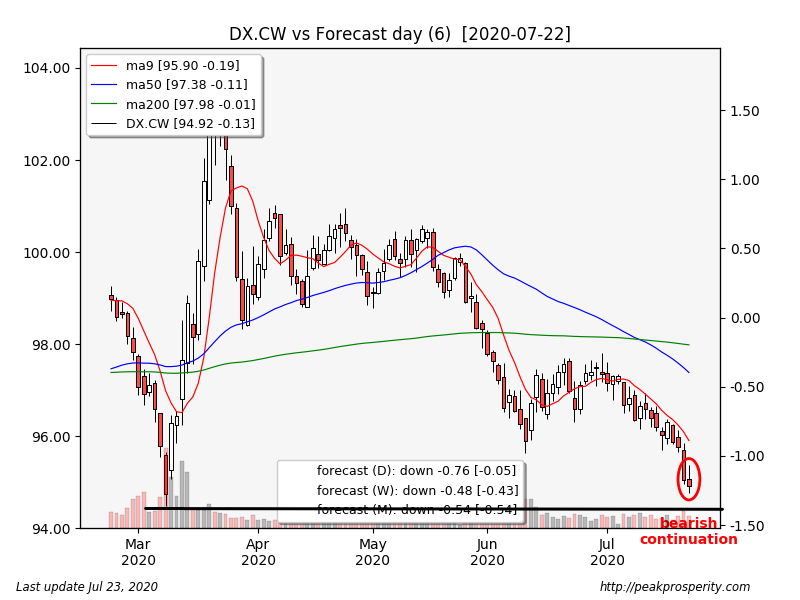 Crude rose +0.33 [+0.79%] to 41.91 on moderately light volume. The short white candle was unrated, forecaster climbed, moving higher into its uptrend. Crude is in an uptrend in the daily and monthly timeframes.

The (relatively bearish) report didn’t move the market on release at 10:30 am; in fact, crude took off an hour later, and it closed at the highs for the day. This is a new 5-month closing high for crude, which in spite of looking tired, somehow manages to keep slowly moving higher. 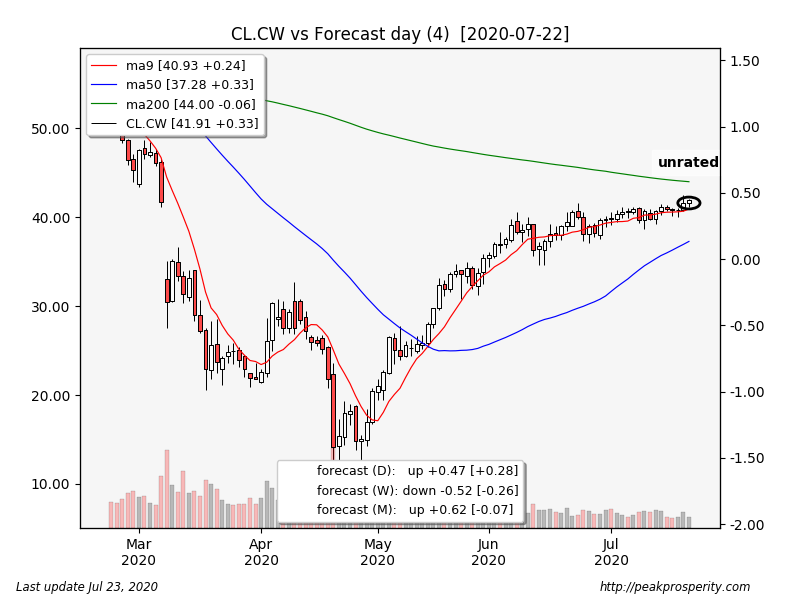 SPX rallied +18.72 [+0.57%] to 3276.02 on moderate volume. The white marubozu candle was a bullish continuation, forecaster climbed, moving higher into its uptrend. SPX is in an uptrend in all three timeframes.

It was a new closing high for SPX. In spite of the bearish sector map (utilities? Leading?) this is not any sort of reversal for equities. 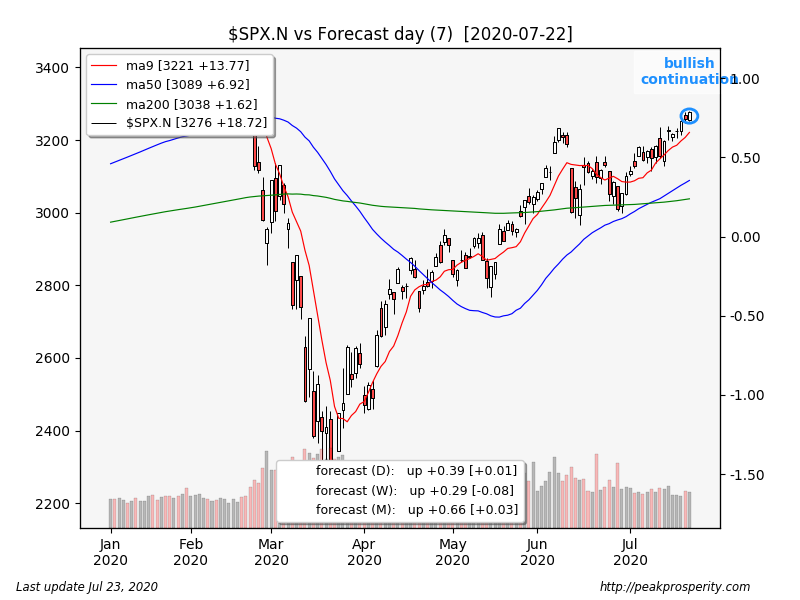 TLT climbed +0.30%. The short black candle was neutral, forecaster dropped, but remains in an uptrend. TLT is in an uptrend in the daily and weekly timeframes. The 30-Year yield fell -3.0 bp to +1.28%.

TY was unchanged. The doji candle was a bullish continuation, forecaster climbed, moving higher into its uptrend. TY is in an uptrend in the daily and weekly timeframes. The 10-Year yield fell -2.0 bp to +0.59%.

Bonds continue to climb as equities rally. Everything is going up together. That’s money printing in action. 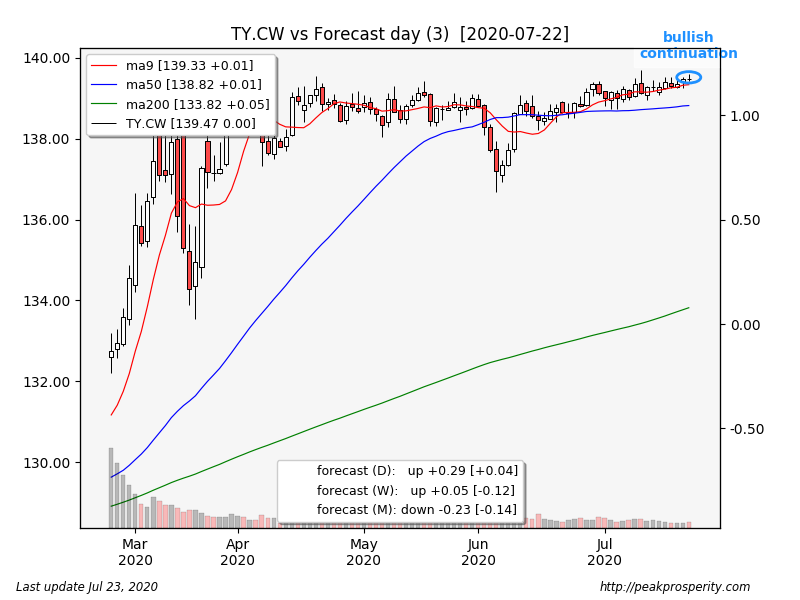 JNK climbed +0.25%. The short white candle was a bullish continuation, forecaster climbed, moving higher into its uptrend. JNK is in an uptrend in the daily and weekly timeframes.

New 5-month closing high for crappy debt. Nobody is worried about defaults right now. Risk on. 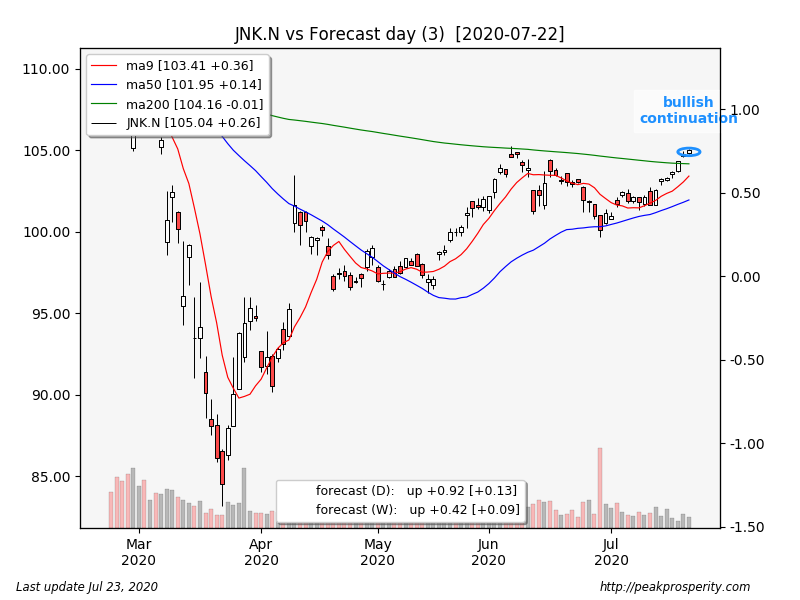 The GLD ETF tonnage on hand climbed +5.26 tons, with 1225 tons remaining in inventory.

Physical ETF discounts are increasing – looks like holders are taking profits – BV premiums are mixed, while physical silver remains in short supply. Premiums on physical have not declined with price at all.

Silver, once again, held center stage. This is the second > $1 rally in a row. I lived through the 2010-2011 silver bull market. I was only dimly aware of history being made while it was happening. I think we are reliving that time in history. At least, it sure feels as though we are.

As I pointed out earlier in this post, everything is going up together. Risk on for equities and crappy debt, bonds continue to move higher, and PM is (mostly) on fire, with undervalued silver and platinum doing best. Copper may be ready to reverse, while crude is inching higher.

Cases in Arizona continue to plunge, and deaths have topped out. A friend of mine suggested this is all about Trump seizing control over the numbers; he apparently has “people on the ground” there. I’ve heard other reports that say these are not “cases”, but instead, they are “positive tests” – each time someone tests positive, they become a “confirmed case.” And often the same people get tested multiple times.

Wherein lies the truth? We will really only know in 6 weeks; the “weekly excess deaths” chart at CDC may provide some measure of independent truth.

What kills people in America? According to the CDC: mostly, not COVID-19. I mean, you don’t get that sense from the news, but that’s how it is. 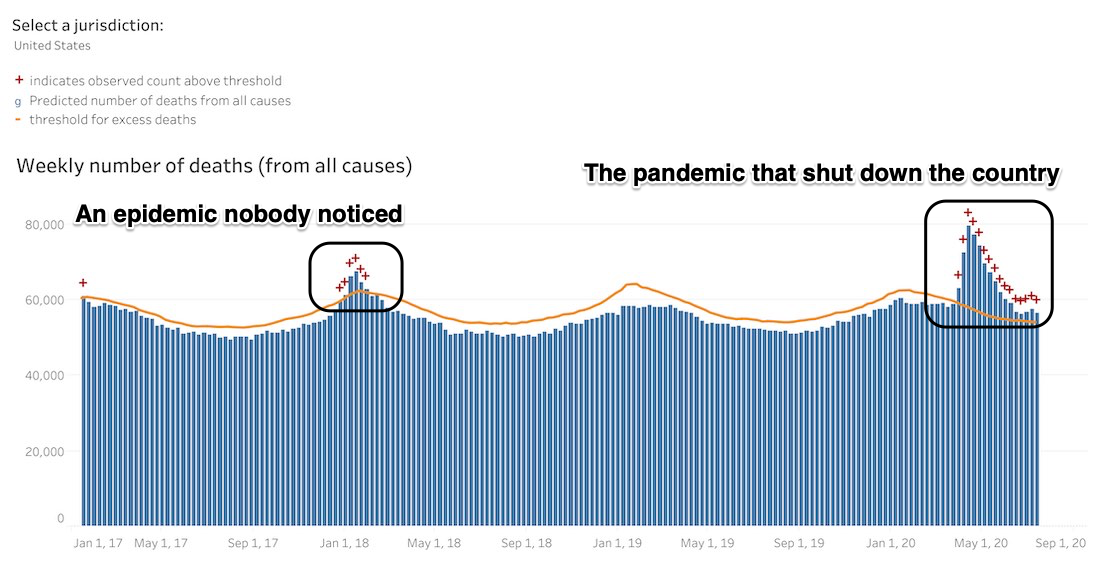 Here’s a link to that CDC excess deaths page.  You can do all sorts of queries there.

Wow davefairtex, I’m not not into PMs (beyond some long-term hodling) but that’s some impressive analysis bro!

So here’s an extra wrinkle that crossed my mind, and now Zerohedge has published:  Robinhooders piling into PMs (SLV specifically).

Obviously we’ve had dip buying for the past few days/week; do the charts/volume/underlying stats show any signs that this could be building momentum?

And if so, what are the implications for those of us that will be riding this wave?  I’m especially thinking miners, who could go ballistic if cash starts piling in.

If it is the Robinhooders, I’d expect them to be primarily in the paper assets like GLD and SLV, as these aren’t actually “real” physical gold bugs.  Miners could come in a second wave as people seek out pockets of value.

Just thinking out loud – would be curious what the hive mind here thinks, and how this could be played to build a bigger stack of physical (or FRNs).  The idea of Robinhooders could mean a very rapid spike, with a very rapid fall as they lose interest.

I definitely think we’ve seen a rapid spike up.  I don’t pay for the feed from Robin Hood though, so I can’t say what they are buying.

I did find this – no gold stocks in there that I saw.

Thanks for the analysis and insight Dave.