Gold sold off hard starting at 10:30 am, but the plunge lasted just 35 minutes and then the pressure was off, and gold recovered some of its losses by end of day. The long black candle was neutral, forecaster dropped, but remains in an uptrend. Gold is in an uptrend in all three timeframes.

Gold/euros dropped -3.45 [-0.21%] to 1620.16 on very heavy volume. The dark cloud cover candle was a bullish continuation, forecaster dropped, but remains in an uptrend. Gold/euros is in an uptrend in all three timeframes.

Just before the day low occurred at 11:07, there were a series of high volume 1-minute bars. It looked like someone tried to force price lower, but ran into a lot of buyers, and was unable to do so, and then gave up. This happened right around round number 1800. I’m guessing there is now strong support at that level.

No bearish reversal for gold. Uptrend remains in place. There was even some short-covering on today’s drop. 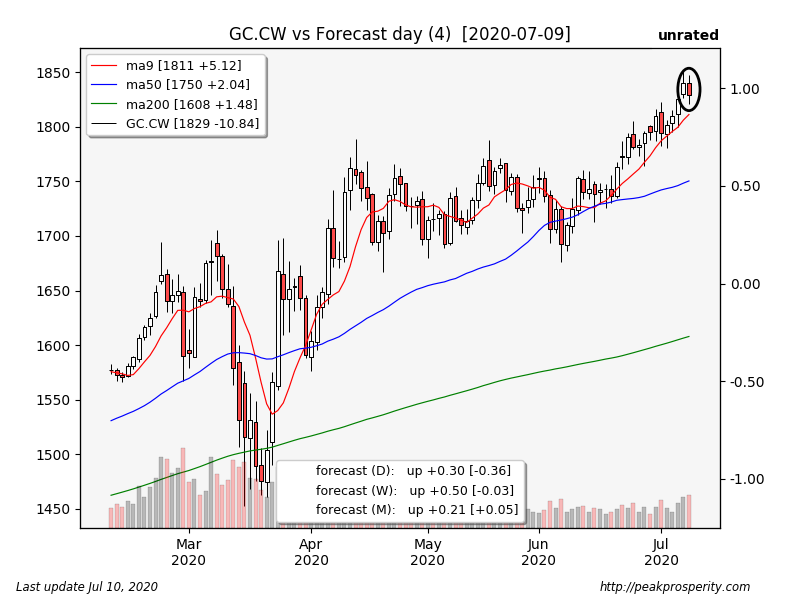 Silver also sold off briskly at around 10:30 am, and made its low at 11:15, rebounding somewhat by end of day. The long black candle was a reasonably strong bearish reversal (43%), forecaster dropped, but remains in an uptrend. Silver is in an uptrend in all three timeframes.

This was a strongly bearish candle print for this candle type; this might mark a top for silver, although the forecaster isn’t convinced just yet. Silver remains above 19, which is a positive sign. 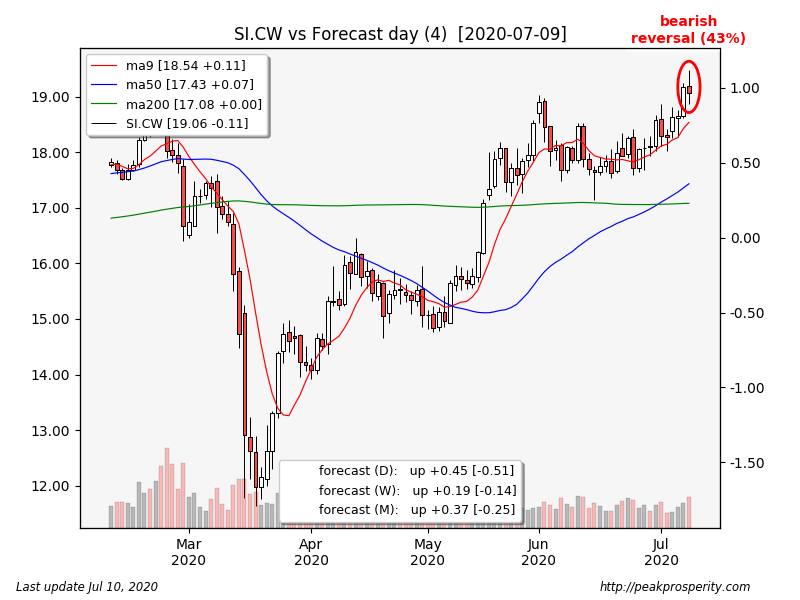 Miners followed gold lower, bottoming out just after 11, and then rallying steadily for the rest of the day. GDX fell -0.44% on moderately heavy volume, and GDXJ fell -0.39% on moderate volume. XAU dropped -0.02%, the spinning top candle was a bullish continuation, forecaster climbed, moving higher into its uptrend. XAU is in an uptrend in all three timeframes.

The miners looked strong today; traders bought the morning dip. No reversal. If miners lead, that suggests we aren’t going to see a meaningful correction in the metals. 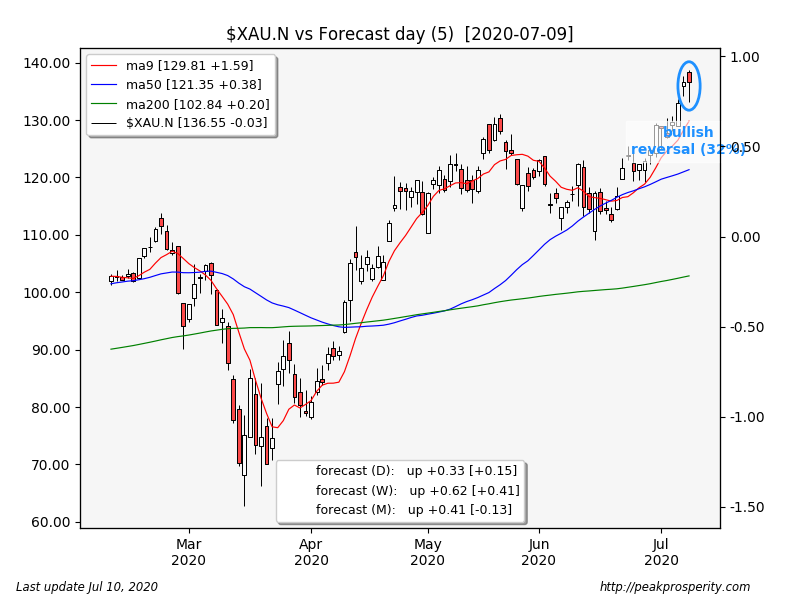 Platinum fell -28.23 [-3.30%], while palladium rose +23.52 [+1.20%]. Platinum printed a relatively strong bearish engulfing (39%), and forecaster dropped into a downtrend. Palladium is slowly starting to move higher, although today looked like a failed rally.

Copper rose +0.01 [+0.35%] to 2.83 on moderate volume. The spinning top candle was a possible bearish reversal (32%), forecaster climbed, moving higher into its uptrend. Copper is in an uptrend in all three timeframes.

Copper is closing on January’s high, but may be running into some resistance. Uptrend remains intact. 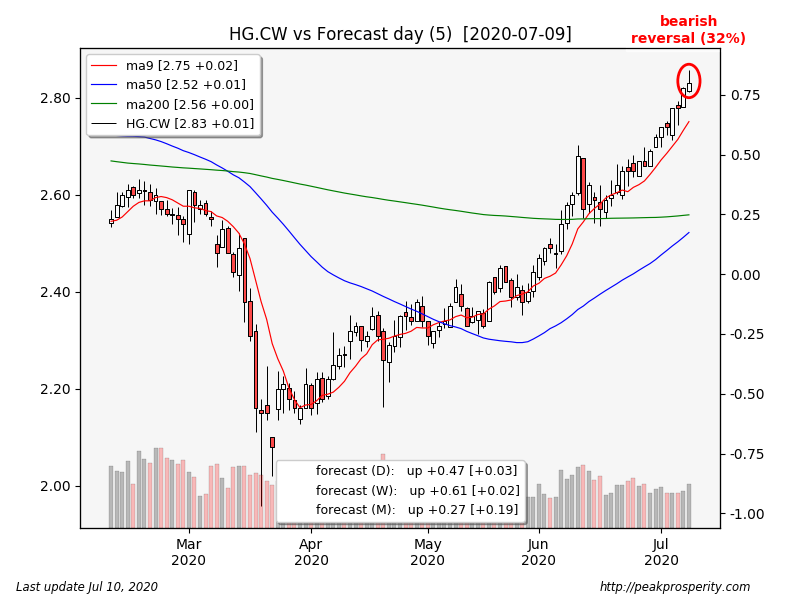 The buck climbed +0.30 [+0.31%] to 96.66 on moderate volume. The long white candle was a possible bullish reversal (38%), forecaster climbed, but remains in a downtrend. The buck is in a downtrend in all three timeframes.

This might be a low, but probably not; it was a relatively weak bullish reversal. The downtrend is weak – but it remains a downtrend. 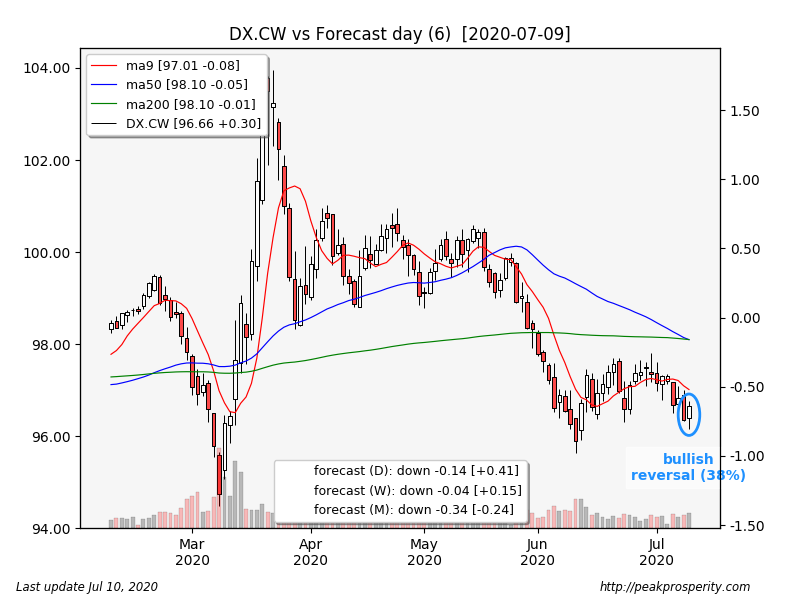 Crude plunged -1.23 [-3.00%] to 39.73 on moderate volume. The swing high candle was a likely bearish reversal (62%), forecaster plunged, falling into a downtrend. Crude is still in an uptrend in the weekly and monthly timeframes.

This was a very strong bearish reversal candle print for crude. Forecaster agrees: crude is probably heading lower. Crude ended the day below the 9 MA, which is a negative sign. 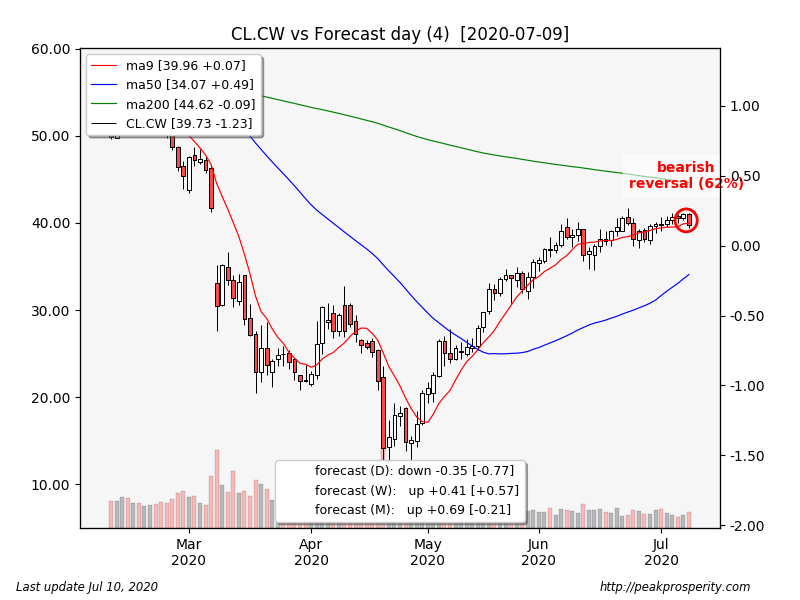 SPX fell -17.89 [-0.56%] to 3152.05 on moderate volume. The long black candle was a reasonably strong bearish reversal (43%), but forecaster climbed, moving higher into its uptrend. SPX is in an uptrend in the daily and monthly timeframes.

Equities sold off starting at the open, and it continued through about 11:15; prices recovered much of the losses by end of day. This was a strong bearish candle print; if crude continues to drop, I think equities will probably follow crude lower. We are right on the edge, I suspect. 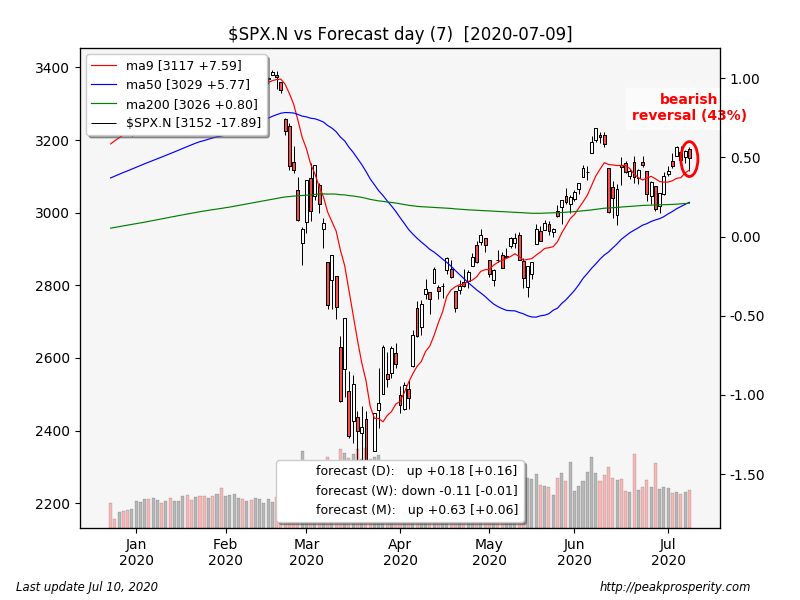 TLT rallied +1.59%. The opening white marubozu candle was a bullish continuation, forecaster climbed, moving higher into its uptrend. TLT is in an uptrend in the daily and weekly timeframes. The 30-Year yield fell -4.0 bp to +1.35%.

TY climbed +0.24%. The confirmed bullish nr7 candle was neutral, forecaster climbed, moving higher into its uptrend. TY is in an uptrend in the daily and weekly timeframes. The 10-Year yield fell -5.0 bp to +0.62%.

Bonds did well today; this supports the risk off thesis for equities & crude also. 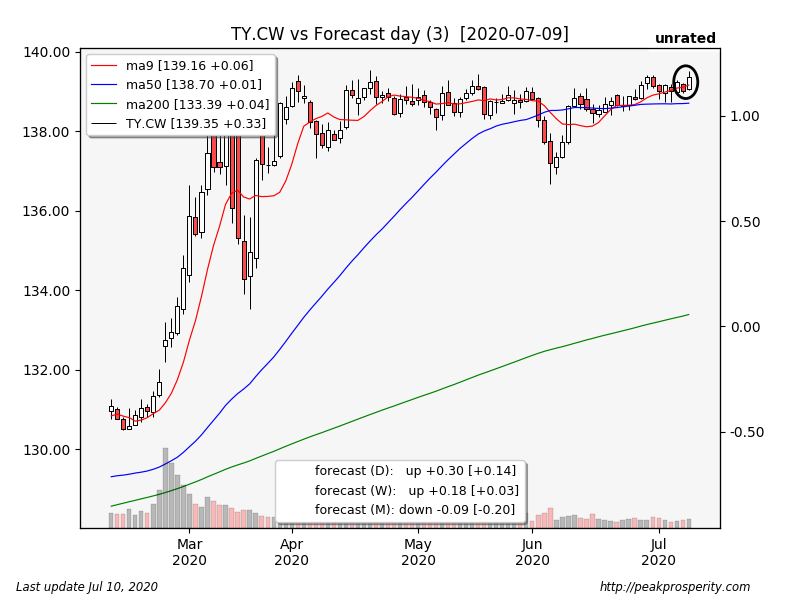 JNK dropped -0.31%. The spinning top candle was a bearish continuation, forecaster dropped, but remains in an uptrend. JNK is in an uptrend in the daily and weekly timeframes.

Crappy debt is moving lower, but slowly. It hasn’t really tipped over just yet. 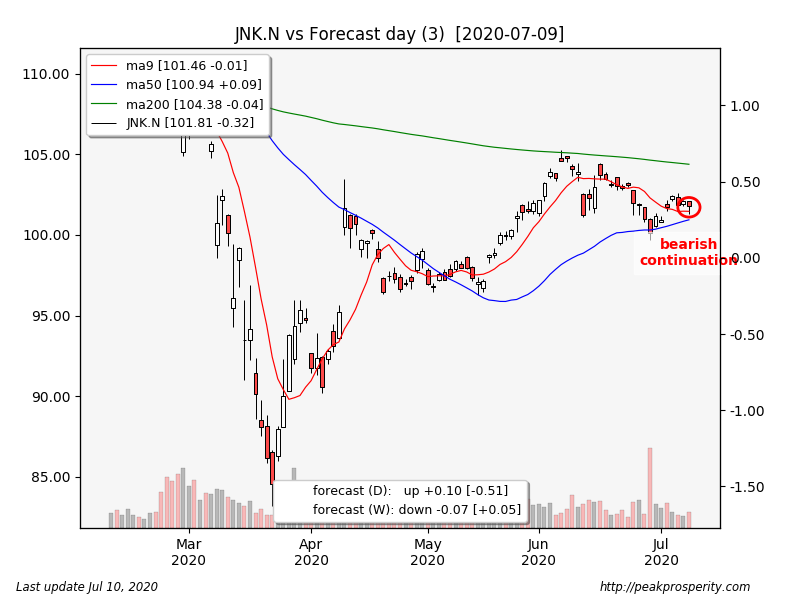 Kilo bars are back, silver larger bar premiums remain, 2 of 3 physical ETFs are now in premium too, while BV is in slight discount.

Crude oil has probably reversed; the candle print was horribly bearish, and forecaster plunged also. I thought it would happen a few days back. Copper still looks ok, crappy debt is looking a little iffy, and equities may be ready to move lower, although that probably depends on crude.

Bonds are also signaling risk off.

Gold ran into some selling pressure, but it looks as though it has strong support at round number 1800. Silver I’m less sure about; it didn’t bounce quite as strongly. If we go by what the miners are doing, then PM is probably going to be fine. It looked as though buy-the-dip was alive and well in the mining shares.

Fed continues to buy treasury bonds, but otherwise it appears to be withdrawing stimulus.

Sorry the report was a bit delayed today. Stuff came up.

Dated but good.  Your money in the bank is safe!