Gold moved sideways in Asia, sold off in London, then rallied at the US open, breaking out to a new 9-year high at roughly 10 am. Gold kept most of its gains into the close. The long white candle was a bullish continuation, forecaster climbed, moving higher into its uptrend. Gold is in an uptrend in all three timeframes.

Gold/euros rallied +16.61 [+1.04%] to 1616.48 on moderately heavy volume. The long white candle was a bullish continuation, forecaster climbed, rising into an uptrend. Gold/euros is in an uptrend in all three timeframes.

Today marked another new 9-year high today; last time we were here was back in 2011. At this pace, we could be through the previous high within the month – although I’d expect a certain amount of pounding to happen as we approach round number 1900. Gold breaking out to new highs won’t please anyone in power.  Gold’s uptrend is now fairly strong; the RSI-7 is now 75, which is now mildly overbought. 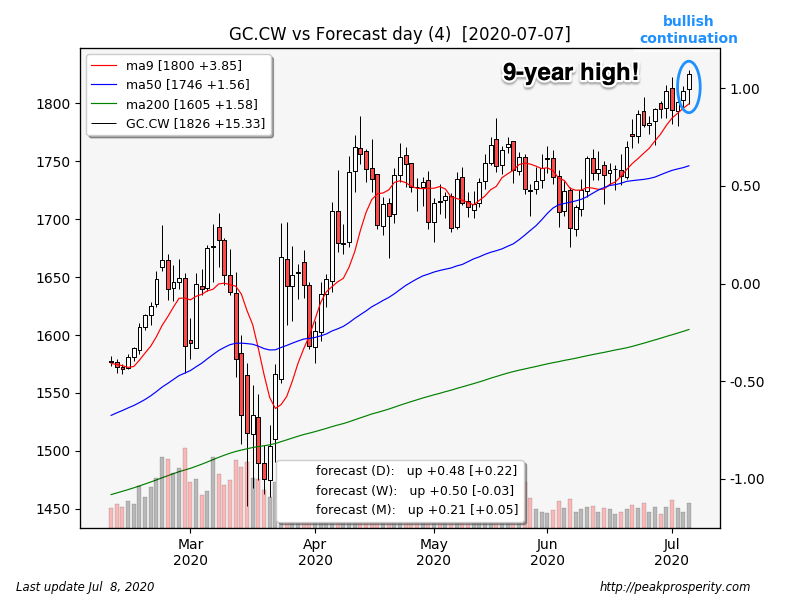 Silver started dropping earlier than gold, the plunge was deeper, and the rebound a bit less intense. Silver was able to only retrace its earlier losses by end of day. The high wave candle was unrated, forecaster moved lower, but remains in an uptrend. Silver is in an uptrend in all three timeframes.

Silver is looking markedly weaker than gold right now, but it remains in a reasonably strong uptrend. 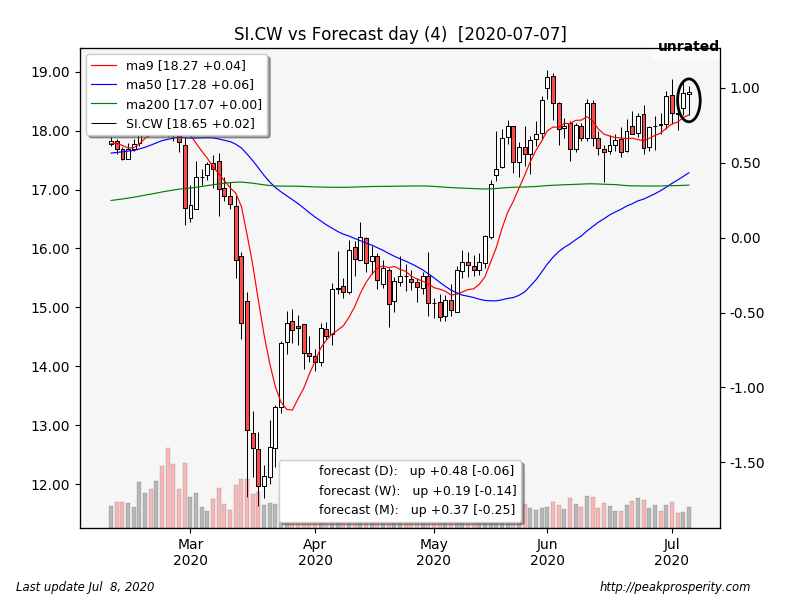 The miners rallied for most of the day, closing near the highs. GDX rose +2.42% on moderate volume, and GDXJ climbed +2.58% on moderately heavy volume. XAU rallied +2.55%, the opening white marubozu candle was a bullish continuation, forecaster climbed, moving higher into its uptrend. XAU is in an uptrend in all three timeframes.

Today was a new 8-year high for the miners, although they are nowhere near to breaking out above their previous high set back in 2011. Even so, the miner uptrend is now looking very strong. Miners have been more than a double off the lows set back in March. 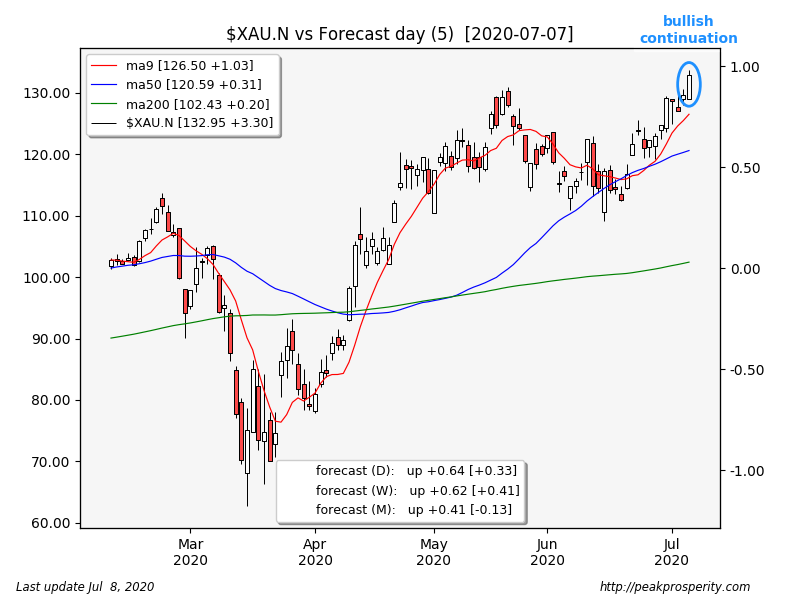 Platinum rose +19.07 [+2.22%], while palladium fell -8.14 [-0.42%]. Platinum is starting to move higher with a bit more enthusiasm. If you want a cheap metal, platinum would be it. I should stop talking about it and buy some. Palladium is showing no signs of life at all – just moving sideways.

Copper was unchanged at 2.78 on moderate volume. The high wave candle was a bullish continuation, forecaster dropped, but remains in an uptrend. Copper is in an uptrend in all three timeframes.

Copper might be getting a little tired; RSI-7 is 85, which is fairly overbought. Copper has made a (roughly) 40% move off the lows set back in March. 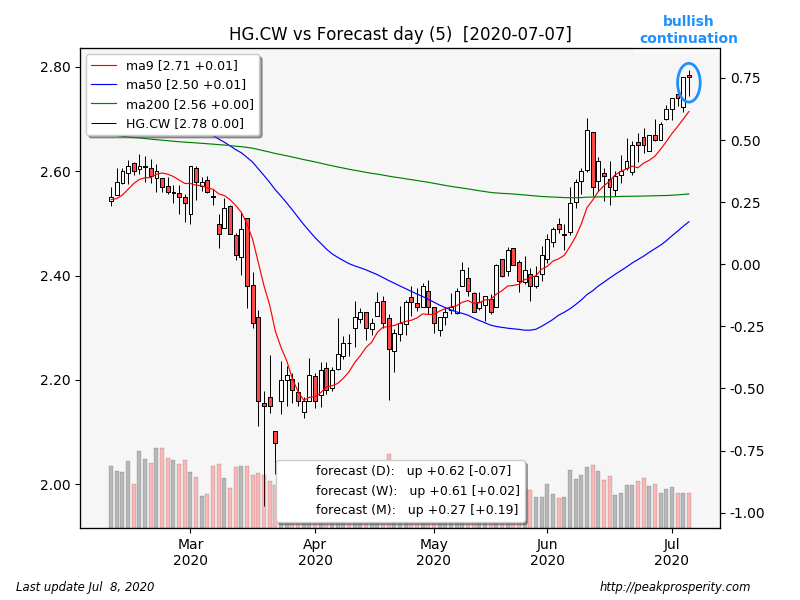 The buck climbed +0.15 [+0.16%] to 96.83 on moderately light volume. The bullish harami candle was a reasonably strong bullish reversal (40%), but forecaster dropped, moving deeper into its downtrend. The buck remains in a downtrend in all three timeframes.

The harami print was pretty strong, especially for a harami. Not sure if this is really a low though. 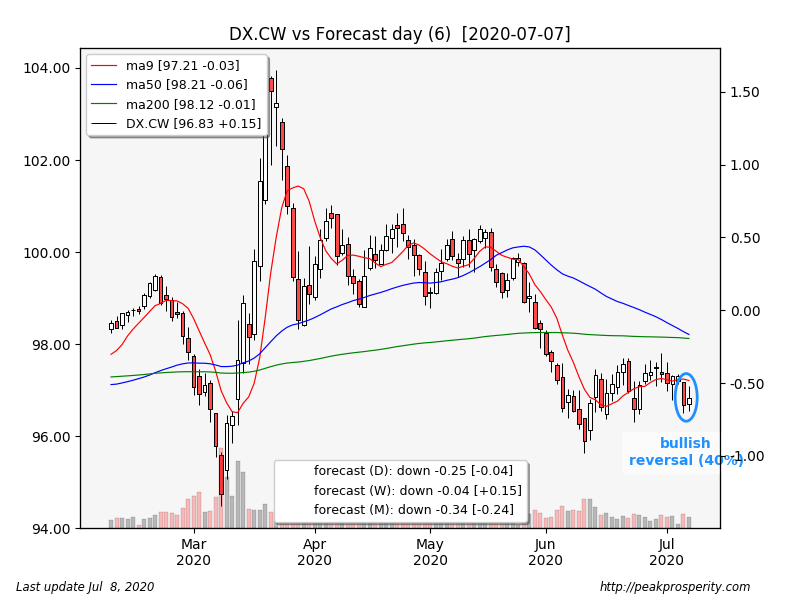 Upside momentum for crude continues to stall. It remains above all 3 moving averages, at least for now. 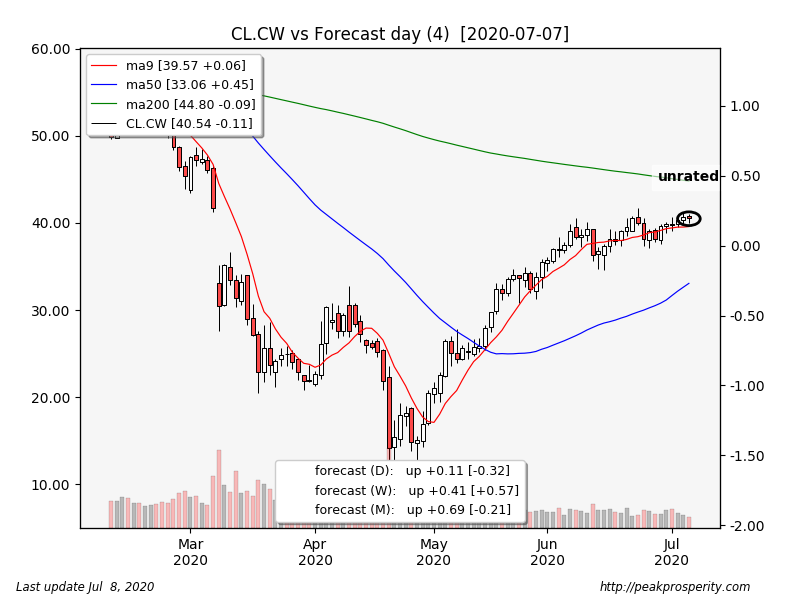 SPX fell -34.40 [-1.08%] to 3145.32 on moderately light volume. The long black candle was a possible bearish reversal (35%), forecaster moved lower, but remains in an uptrend. SPX is in an uptrend in the daily and monthly timeframes.

Reversal? Too soon to tell, I think. 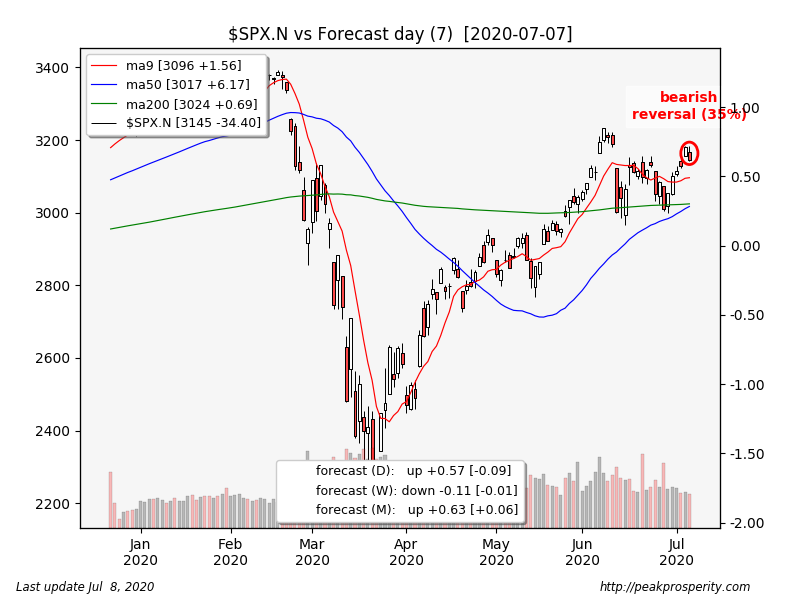 TLT rallied +1.41%. The swing low2 candle was a reasonably strong bullish reversal (46%), forecaster climbed, rising into an uptrend. TLT is in an uptrend in the daily and weekly timeframes. The 30-Year yield fell -2.0 bp to +1.43%.

TY climbed +0.16%. The long white candle was a bullish continuation, forecaster climbed, rising into an uptrend. TY is in an uptrend in the daily and weekly timeframes. The 10-Year yield fell -2.0 bp to +0.67%.

Trends for bonds remains quite weak. The 10-year remains glued to that 0.68% line, where it has been – mostly – since early April. 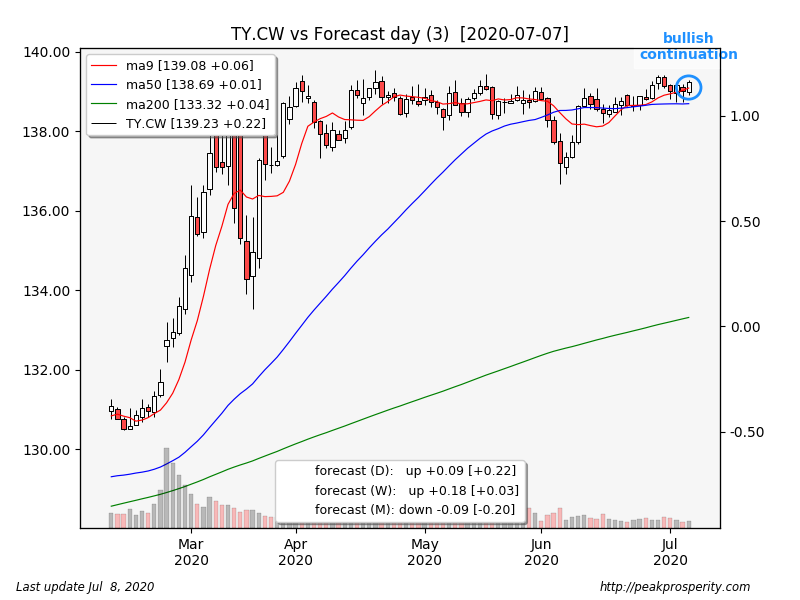 JNK fell -0.55%. The long black candle was a possible bearish reversal (38%), forecaster dropped, but remains in an uptrend. JNK is in an uptrend in the daily and weekly timeframes.

Could be a lower high for crappy debt. Unlike equities, it did not rise above the previous high; it remains in a downtrend. This is a risk off signal. 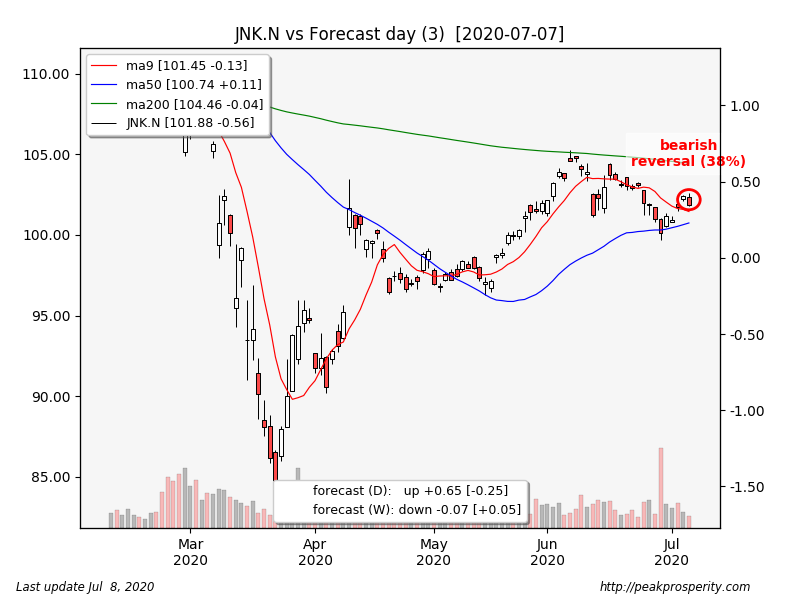 Premiums on big bar silver continue to fall; physical ETFs are mixed, while BV is now in premium.

Gold and the miners are looking very strong right now – both items broke out to new multi-year highs today. Silver is lagging, as it has done now for a few years now.  While silver is up 50% off the lows ($12) set back in March, it is far from breaking out. That’s good news if you want to buy some more now.

Bonds remain glued to their trading range. I’m guessing the Fed did another 20-30 billion this week in treasury bill purchases.

Equities might be reversing lower; crappy debt seems to think so (and it is definitely looking much weaker than equities), but copper continues to look strong. Crude may be ready to tip over; perhaps we’ll get some clarity tomorrow from the EIA report about where crude goes next. If crude reverses, it will probably take equities lower with it.

Nationally, the unlagged CFR for the US is 1.02%; skyrocketing cases end up making the disease look weak as a result. Assuming anyone is paying attention to the data. Of course this doesn’t change the actual IFR, but if the cases continue to rocket higher, while deaths decline, SC2 will really start to look like “the flu” after all – at least by the numbers anyway.

In a story that really underscores where we are in this pandemic, today we read that Brazil’s President, Bolsonaro tested positive for SC2. In the following article by VOX:

Bolsonaro has also said he’s taking hydroxychloroquine, which he’s touted as a miracle cure, though research findings don’t bear that out. On Twitter, his son Eduardo touted Bolsonaro’s use of the drug as a reason he’d come out of this, because “chloroquine is very effective at the start of the disease.” (Again, there’s no evidence to back this up.)

This article was not dated March 3rd, it was dated July 7th. Does the intrepid reporter not know about the 4 studies that clearly showed efficacy – especially when used early? Perhaps the writer gets news from CNN, and as a result, is completely uninformed. It is just…utterly remarkable how politicized medicine has become.

If/when the truth actually becomes more widely accepted (and there were cracks showing the other day, with CNN reporting the “surprising” results with HCQ that we’ve known about here for months), how great will the cognitive dissonance be? What will the mythical “Cronkite Moment” be for the simple cheap treatment that even Fauci liked way back in 2005?

Will people ever realize they’ve been lied to? And the lies have caused death? It feels like Vietnam, all over again.

I’m hopeful we will eventually have that Cronkite Moment.

Important level broken this morning; silver broke above 19, hit 19.15 briefly, and is now 19.07.  A daily close above 19 and we could see silver really take off.  When silver decides to rally, it often moves $1 per day.   This could be the time.

I count 5 different previous highs at 19 in the past 18 months.  We are through that level now.

I think we have interesting times just ahead in silver.

Of course, I’m long, so I’m talking my book.  But those commercials have been covering at the highs – very unusual behavior, and bullish.

This coming breakout may be why.

(I’m typing this with crossed fingers)

What a move in the miners today! I was expecting a pullback after yesterday’s move but not so much, lol. The Silver junior miners are flying.

Hey Mr. Chart Guru, what does the volume look like for GDX? Is it finally picking up?

Here’s a fun one I didn’t see until now:

GDXJ:GDX ratio has done a cup & handle breakout.  A very gentle one, but you can see it – GDXJ broke to new highs before GDX did.  That’s a good sign – risk on sign for PM in general.

Not sure the GDX volume is all that great.

Not saying we get there in one go, but…it kinda feels inevitable.

Greg Hunter did a must-see interview with Craig Hemke where Craig talks about the data he has laboriously collected over the last decade about who owns what in the silver market.

According to Hemke, JPM has been able to execute the wash-and-rinse cycle on the silver market because they have a big vault full of silver and that lets them issue 20% of the contracts at COMEX, way over what a normal “position limit” would be, which provides them an effective axis of control over the silver market.

However, after COVID, something changed.  People are now demanding delivery.  Lots of people.  So metal is pouring out of COMEX.  It is also pouring out of JPM’s vault.

The shortages in physical silver means, refiners in the US stand for delivery, construct bars, and sell them at 10% above spot.  That’s free money.

JPM has a choice: they stop shorting (and price rises – no interference), or they lose their silver, and thus they lose the ability to short.

I saw the recent COMEX silver delivery event appear in the large, and to me unexplained (but bullish) drop in OI this past two weeks.  It was a delivery month for silver.  I suspect, OI dropped because longs stood for delivery.

Bottom line: COMEX is now a physical market.  And supply of silver is finite.  My guess: as long as 10% premiums exist in the physical market, US refiners will stand for delivery.  And at some point, shorting will stop, and…silver will catch up – rapidly – to gold.

That is some of the happiest and most significant news I have heard in a long time.  Thank you.

GDXJ tracks very well with silver and the silver miners.  I don’t know why, but there’s a very good correlation.  As Ag:Au increases there will be a magnified correlation with GDXJ:GDX.

This was a great find. Thanks bro!