Gold fell in Asia, but then moved higher for most of the rest of the day. The spinning top candle was neutral, forecaster was unchanged and remains in an uptrend. Gold is in an uptrend in all three timeframes.

Gold/euros fell -3.15 [-0.20%] to 1599.86 on moderately light volume. The spinning top candle was unrated, forecaster fell, dropping into a downtrend. Gold/euros is in an uptrend in the weekly and monthly timeframes.

Since the buck fell hard today, gold’s rally was just a currency effect. You can see this in the Euro chart; gold/Euros is struggling to stay above the 9 MA, while gold/USD looks as though it may be ready to break out to new highs. 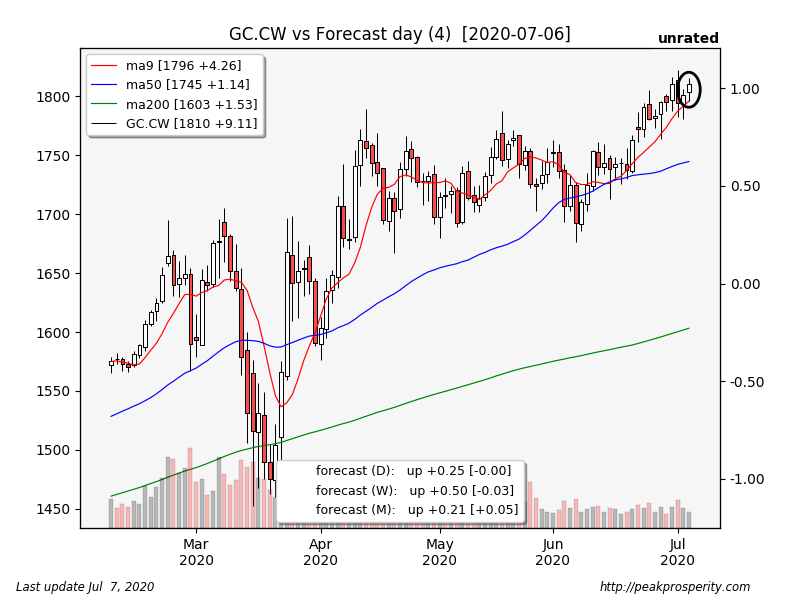 Silver looked stronger than gold today; it mostly chopped sideways in Asia, then rallied strongly in London, retreating after the US market opened, but still putting in a big gain. The long white candle was neutral, forecaster climbed, moving higher into its uptrend. Silver is in an uptrend in all three timeframes.

Silver is flirting once again with round number 19. Silver’s uptrend remains moderate. With the RSI-7 at 65, silver is far from being overbought, which is positive. 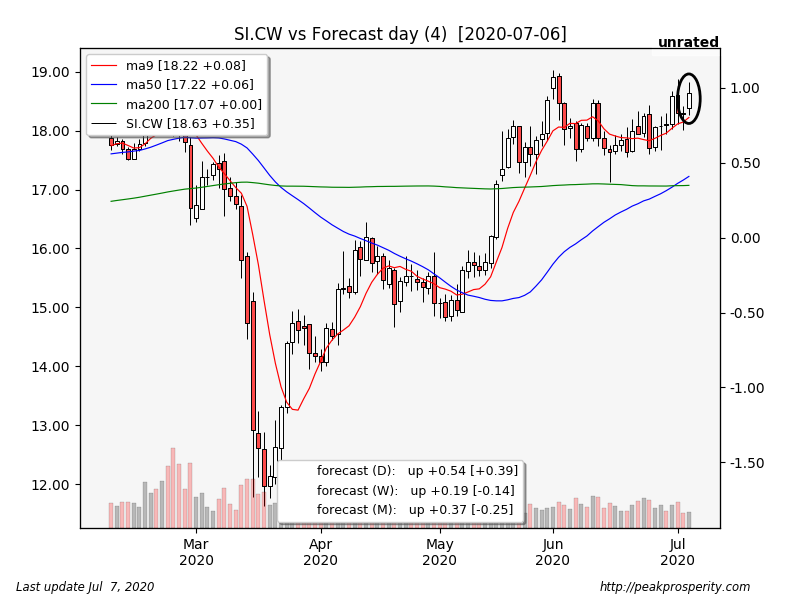 Miners gapped up at the open, then retreated, but then rallied once more into the close. GDX moved up +1.85% on moderately light volume, and GDXJ jumped +2.63% on moderate volume. XAU climbed +2.04%, the spinning top candle was a bullish continuation, forecaster rose, moving higher into its uptrend. XAU is in an uptrend in all three timeframes.

This was a new 8-year high for the mining shares today. The trading range was a bit narrow, but given that the miners outperformed gold, it was a good performance. Miner uptrend is now looking very strong. 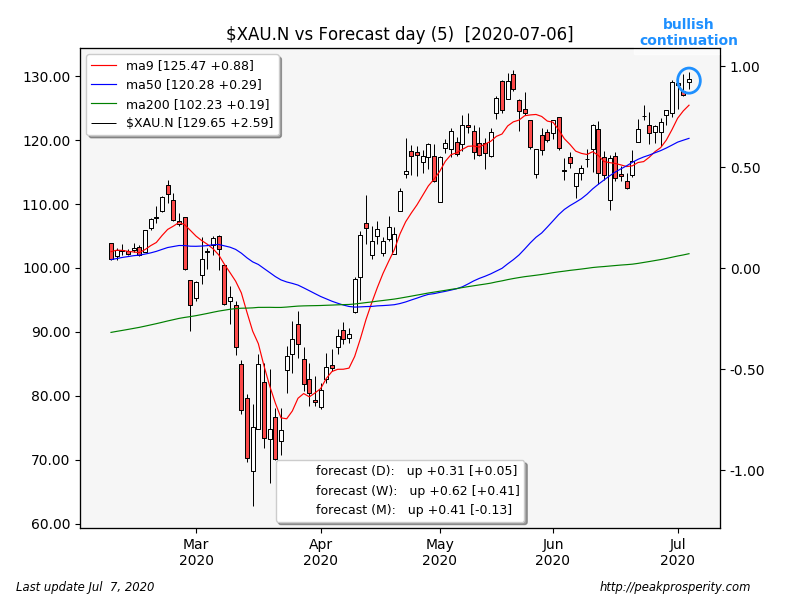 Copper rallied +0.04 [+1.46%] to 2.78 on moderately light volume. The confirmed bullish nr7 candle was a probable bullish reversal (54%), forecaster climbed, moving higher into its uptrend. Copper is in an uptrend in all three timeframes.

Copper: relentlessly rising, yet another new 6-month high. Copper’s short and medium term uptrend is now very strong. This is a risk on signal. 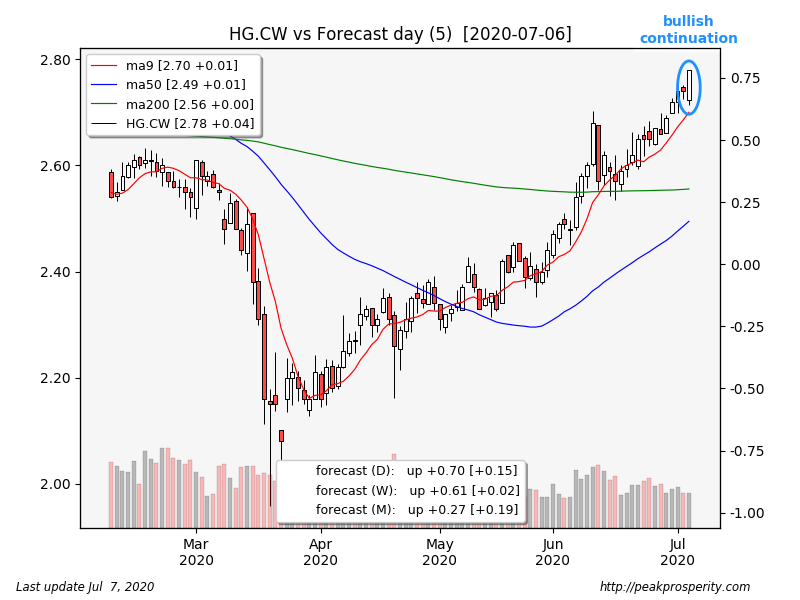 The buck dropped -0.62 [-0.64%] to 96.68 on moderate volume. The confirmed bearish nr7 candle was a reasonably strong bearish reversal (45%), forecaster dropped, moving deeper into its downtrend. The buck is in a downtrend in all three timeframes.

The buck is breaking down. At least partially, this is a risk on signal, since money is flowing into AUD, which tends to be the “risk on” currency. 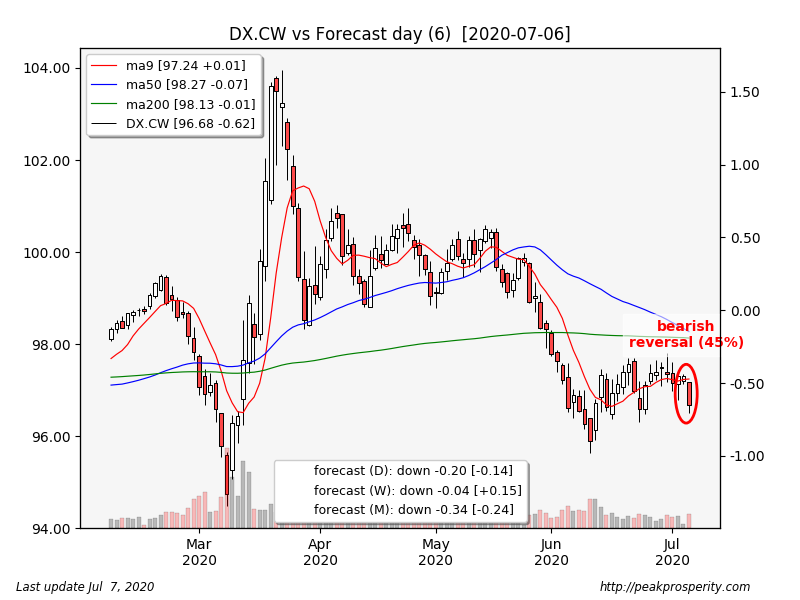 Crude rose +0.32 [+0.79%] to 40.65 on moderately light volume. The spinning top candle was a bullish continuation, forecaster dropped, but remains in an uptrend. Crude is in an uptrend in all three timeframes.

Crude’s uptrend has slowed, but it remains in place. Even though crude is above round number 40, it looks as though this price level is providing some strong resistance. See in the chart how each new move higher is a bit more shallow? Momentum is slowing. 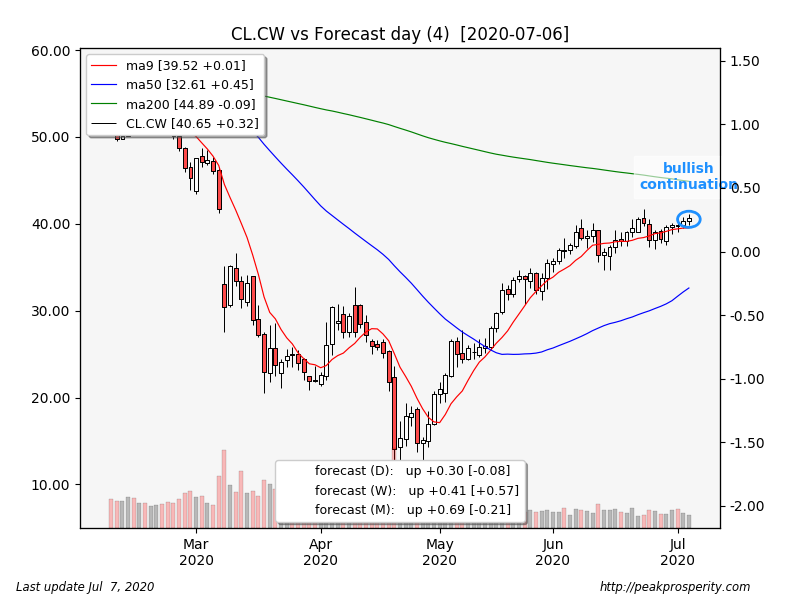 SPX rallied +49.71 [+1.59%] to 3179.72 on moderately light volume. The white marubozu candle was a bullish continuation, forecaster climbed, moving higher into its uptrend. SPX is back in an uptrend in all three timeframes.

Today’s move invalidates the previous lower high – SPX is most definitely back in an uptrend. Sector map is classically bullish. Tech is making new all time highs – AMZN (the clear pandemic winner), AAPL, NFLX, and of course TSLA – most valuable automaker market in the world, at $254 billion. It doesn’t make many cars, and the quality of the cars is reportedly terrible – but someone is definitely buying the stock.
https://www.nbcnews.com/business/autos/tesla-ranks-dead-last-latest-auto-quality-survey-n1232055 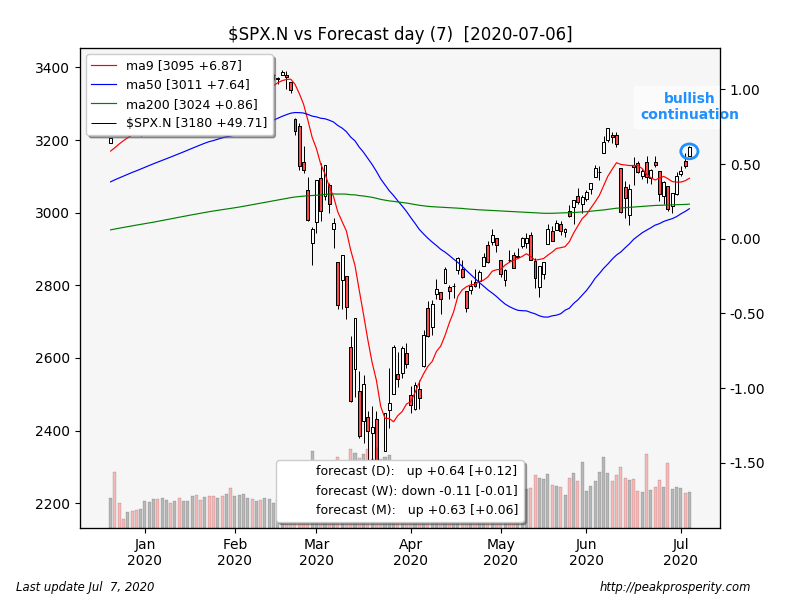 TLT dropped -0.41%. The closing white marubozu candle was a bearish continuation, forecaster dropped, dropping into a downtrend. TLT is in an uptrend in the weekly timeframe. The 30-Year yield rose +2.0 bp to +1.45%.

TY dropped -0.11%. The spinning top candle was a reasonably strong bearish reversal (41%), forecaster dropped, dropping into a downtrend. TY is in a downtrend in both the daily and monthly timeframes. The 10-Year yield rose +2.0 bp to +0.69%. 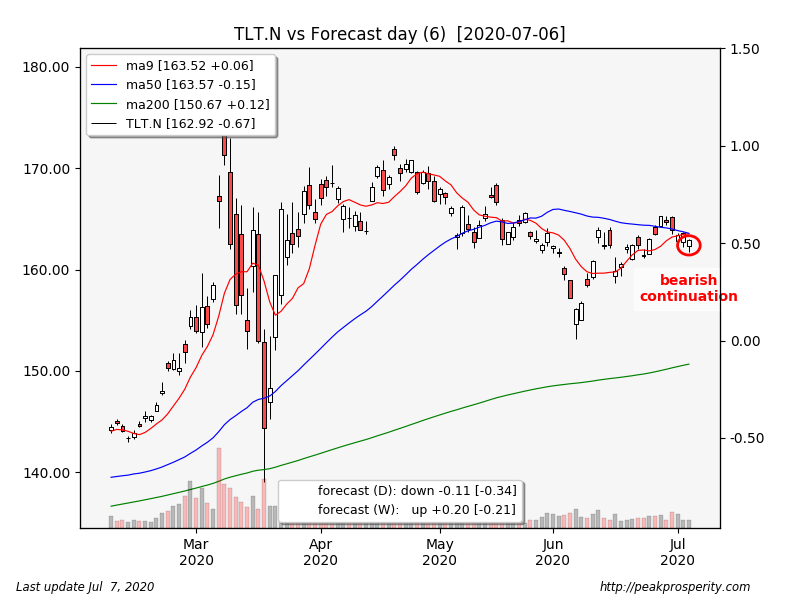 JNK climbed +0.71%. The short white candle was a bullish continuation, forecaster climbed, moving higher into its uptrend. JNK is in an uptrend in the daily and weekly timeframes.

Crappy debt is supporting the risk on thesis; it is now conclusively back above the 9 MA. 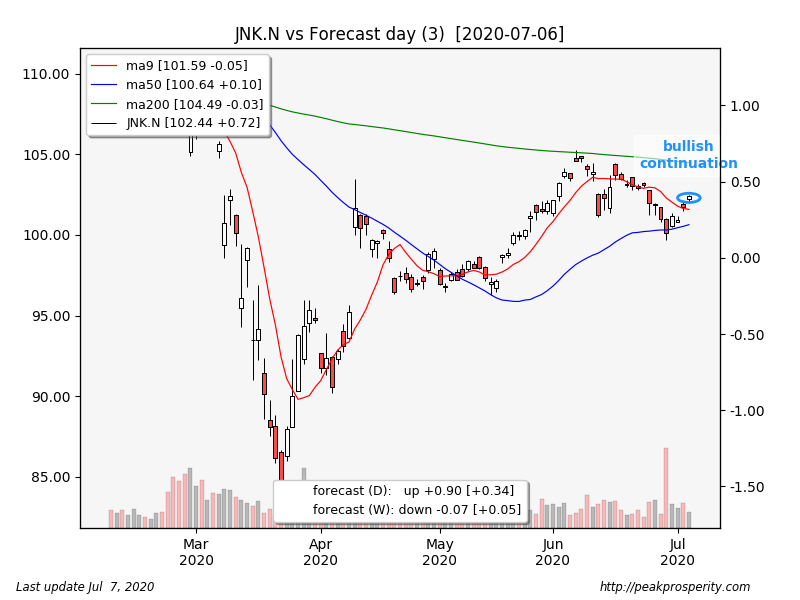 The physical ETFs have fallen back into discount, BV premiums are mixed, and the premiums on the larger silver bars remain elevated.

Non-MFG PMI: 57.1 (prior 45.4), a massive increase. Signs of inflation. Maybe there’s a consequence to printing and distributing 2.5 trillion over a 6-week period. Something to keep an eye on.

After getting smashed off the 9-year high last week, gold is moving back up once more, aided by the plunging dollar. Silver looks strong too, and the miners appear ready to break out to new highs.

Copper is providing a strong risk-on signal, while crude and crappy debt are somewhat more tentative. Equities blew past the previous (lower) high set two weeks ago. That’s bullish, as is the sector map performance of SPX.

ISM numbers suggest that inflation – actual rising prices – might be starting to be a thing.

It occurs to me – not for the first time – that large companies with access to the Fed, and the bond market, are more easily able to weather shutdowns than small business on which economic activity in America used to be based. Large mega corps allow profits to be centralized even further, at the expense of mom & pop. That might be part of why the stock market is rallying; its the transfer-of-wealth (and market share) effect from Small Business America to Big Money. In my locale, Starbucks has eaten yet another local coffee shop. Now we have 3 Starbucks on one street. You can’t swing a dead cat without hitting a Starbucks these days.

Cases in Arizona, which is working on herd immunity right now, have inched lower for two days now. It is way too soon to know if this marks a top. But I remain hopeful. Sweden has long since achieved herd immunity. They have shown us the way.

New wildcard: Ghislane Maxwell is now in jail. One hopes she is on suicide watch.

Maxwell’s arrest? I think the chances of this being about the election approach 100%. We could be in for some very interesting disclosures. Assuming she doesn’t “commit suicide”, of course. HRC is clearly positioning herself to be a Biden Replacement in the event he is found to be non compos mentis. Think of what Maxwell might have to say about Bill. And, of course, Hillary.

She’s got four months to say it, too.

I watched an interview with Dr. Z. Barton Wang on FinacialDoomPornTV.com and he had some poop on the 1.6 Trillion in the Treasury General Account.

First, remember the repo market problem in Sept 2019? That was caused by the treasury sucking liquidity out of the market into the TGA.

Trump knew the FED would withdraw the market opium going into the election so he started having the Treasury Sec stash some away for a rainy election day.

Evidently, quite a bit of the PPP and Cares-Act money is also stashed in the TGA. It’s brilliant move because the House or the FED can’t stop the Treasury from supercharging the markets going into the election.

Trump bought himself an election, and he used house (taxpayer) money to do it.

Ok, here’s the chart for the treasury general account, courtesy of the Fed.

So we think that the dip in 2019 caused the REPO issue?  It didn’t seem to be that large.  Hmm.  I’m always willing to believe a theory that suggests a politician is buying an election using tax money (usually it involves tax cuts, or stimulus programs).  That’s only because history is so replete with examples of this.

Its why Nancy isn’t so eager to do a second round, unless she gets a boatload of goodies too. 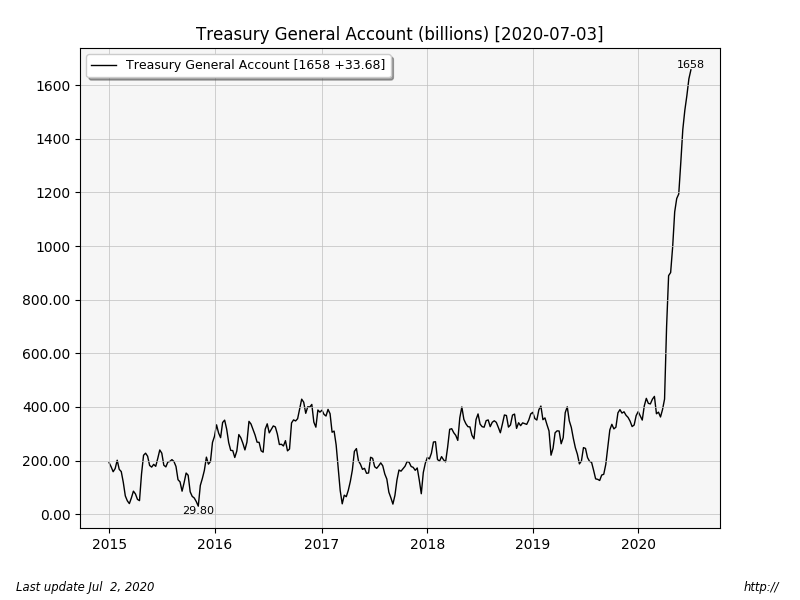 Think of what Maxwell might have to say about Bill. And, of course, Hillary.

Dave, don’t forget to think about what she might have to say about Donald!!!

Trump was friendly with Epstein at some point and it’s on public record that he at least had an incling about Epstein’s taste in (very) young women. No one is guilty just by an unfortunate association, but if you’re considering the possibility that there is a Clinton skeleton in the cupboard, then surely you can’t ignore the same possibility for Trump?

More apolitically, I’d be especially worried if I was Prince Andrew or in fact any member of the British royal family.

I thought about that.  I suspect if there was anything to it, I’m guessing it would already have been released by now.  Can you imagine anyone holding anything back, in this environment?  And/or The Donald would not have been able to do any of the things he campaigned on, because they’d own him already.

Reading the tea leaves, it sure looks like The Donald replaced the AG for the SDNY, so that he could slot someone into place who would actually take care of the Epstein business.  I mean – the SDNY AG didn’t want to leave.  That was certainly a thing.  It felt like an operation.

And then, not long afterwards, Maxwell gets arrested.  And 4 months before the election, too.

Just my sense from reading the tweets: Trump might have sniffed around the edges, but Clinton had dozens of four course meals.

Hopefully, Doug will watch this closely. The pedophiles and the sex slaves weren’t at the pizzeria, they were at Epstein’s place. How many times was Blue Dress Billy’s name on the flight log?

Agreed, if Trump was involved, you would think that would have been uncovered by now. I mean we used the Steele dossier for all kinds of shenanigans.