Gold moved slowly higher in Asia and the first half of the London session, but at 6:30 am, it looked like someone decided it was time for gold to drop. There were repeated, high volume spikes down, which pounded price lower for the next 5 hours. The pressure let up around 11:15 am, and then gold moved higher into the close. The bearish engulfing candle was a reasonably strong bearish reversal (40%), forecaster dropped, but remains in an uptrend. Gold is in an uptrend in all three timeframes.

Gold/euros fell -16.65 [-1.03%] to 1594.21 on heavy volume. The bearish engulfing candle was a probable bearish reversal (50%), forecaster dropped, falling into a state of no-trend. Gold/euros is in an uptrend in the weekly and monthly timeframes.

It was a bearish candle print, and forecaster was hit pretty hard. Is this a bearish reversal? Not yet – not quite. But it is close. 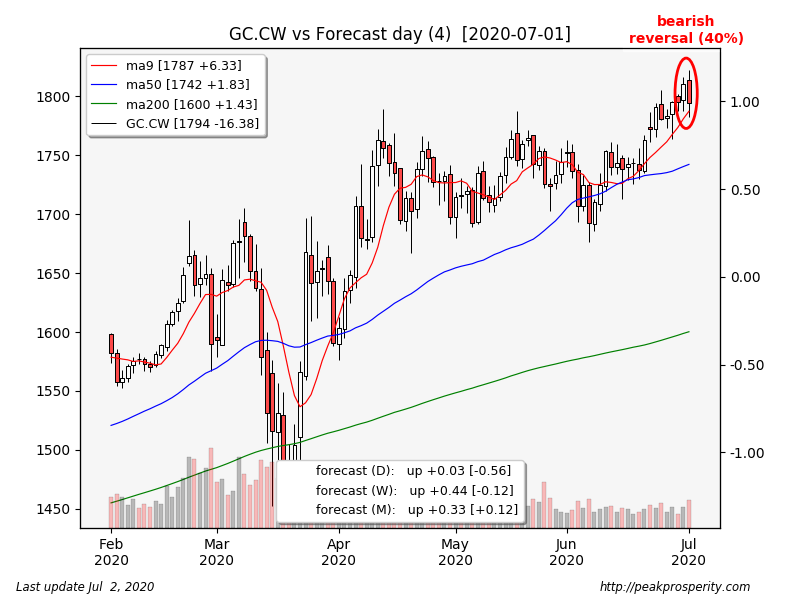 Silver also started falling at 6:15 am, but its downside move looked a bit different. Selling pressure for silver let up at 10:30 am, and then silver moved higher into the close. The dark cloud cover candle was a reasonably strong bearish reversal (41%), forecaster dropped, but remains in an uptrend. Silver is in an uptrend in all three timeframes.

Shorter term, silver’s uptrend remains intact, while longer term, it appears to be on shakier ground. Silver remains above all 3 moving averages. Bearish reversal for silver? I think, not just yet, although this was a highly rated dark cloud cover pattern. 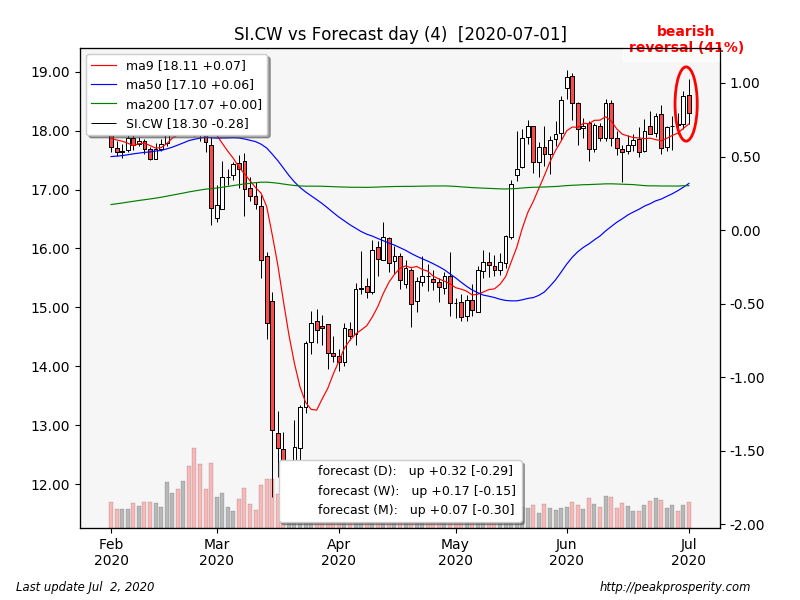 The miners sold off fairly hard through 11:30 am, after which they rebounded steadily, finally ending the day almost back in the green. GDX dropped -0.33% on moderate volume, and GDXJ moved down -0.24% on moderate volume. XAU fell -0.37%, the bearish harami cross candle was a possible bearish reversal (31%), forecaster dropped, but remains in an uptrend. XAU is in an uptrend in all three timeframes.

The miners actually looked quite strong today; the candle print wasn’t that scary-looking, and forecaster hardly noticed today’s move. The uptrend for the miners remains intact. Since they tend to lead, this suggests traders are ignoring the plunge in gold, and instead, buying the dip in the mining shares. Intraday, it looked as though traders were waiting for the selling pressure in gold to abate before jumping in to buy the (modest, 3%) intraday dip. 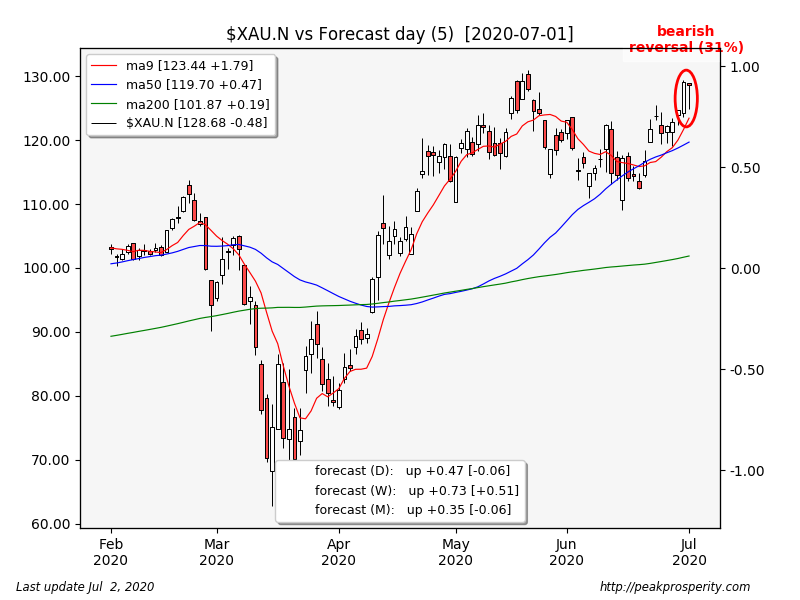 Copper climbed +0.02 [+0.74%] to 2.74 on moderate volume. The confirmed bullish nr7 candle was neutral, forecaster climbed, moving higher into its uptrend. Copper is in an uptrend in all three timeframes.

Copper’s uptrend is now quite strong; today makrs another 6-month high. RSI-7=81, so copper is getting to be a bit overbought. It continues to give off a risk on signal. 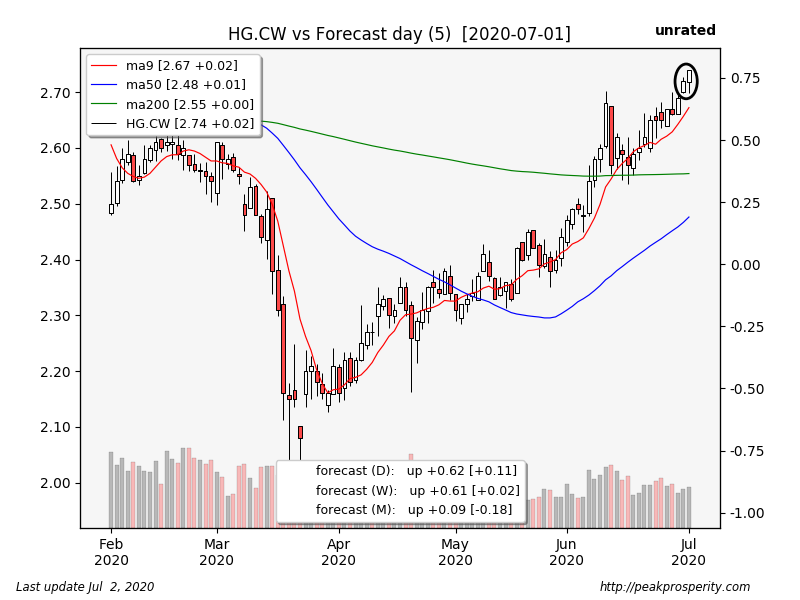 The buck dropped -0.20 [-0.21%] to 97.15 on moderately light volume. The swing high candle was a probable bearish reversal (51%), forecaster climbed, moving higher into its uptrend. The buck is in a downtrend in both the weekly and monthly timeframes.

This was a moderately ugly candle print today, although forecaster doesn’t look upset just yet. The buck remains (overall) in a downtrend, although the strength of the trend remains quite weak. Today’s move did take the buck back below the 9 MA, which is a bearish sign. 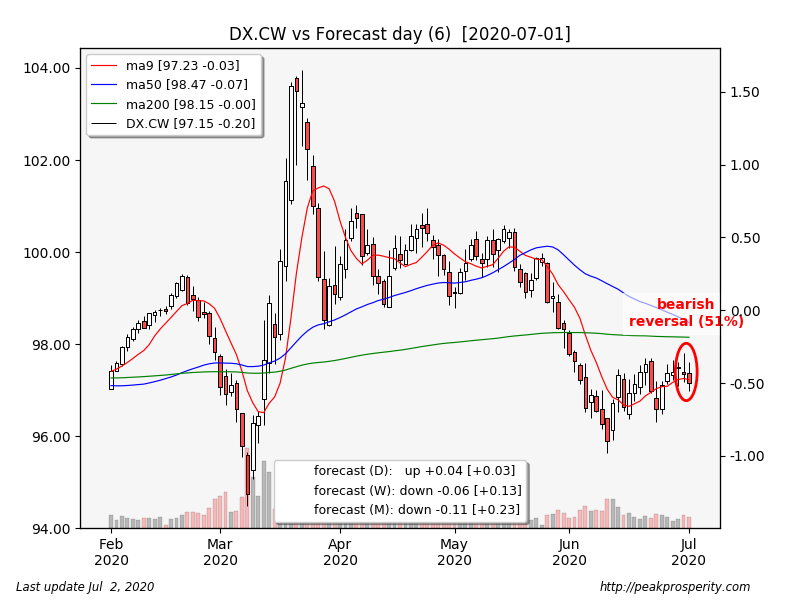 Crude fell -0.08 [-0.20%] to 39.76 on moderately heavy volume. The doji candle was a possible bearish reversal (32%), forecaster dropped, falling into a state of no-trend. Crude is in an uptrend in the weekly and monthly timeframes.

Bearish reversal for crude? Could be. Crude seems to be on the edge of putting in a lower high, but it has not done so just yet. The lack of a rally on the bullish EIA report was a bearish sign. Crude’s overall uptrend does appear to be weakening. 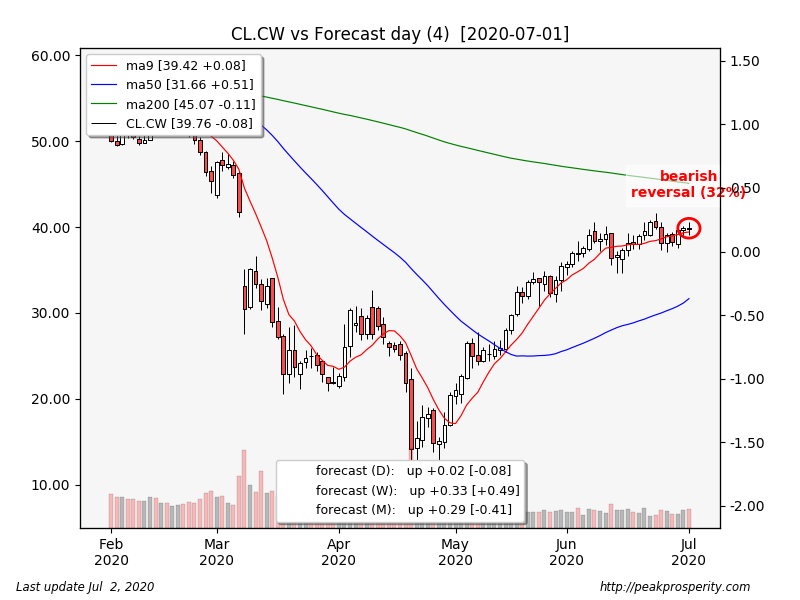 SPX climbed +15.57 [+0.50%] to 3115.86 on moderate volume. The short white candle was a low-percentage bearish reversal (28%), forecaster climbed, moving higher into its uptrend. SPX is in an uptrend in the daily and monthly timeframes.

All of the gains came in the futures markets overnight, specifically in the 7:30-9:30 am period. NYSE advance ratio dropped to 52%, which suggests today’s very modest rally was not broad-based. Likewise, falling financials and energy don’t bode well for market direction. 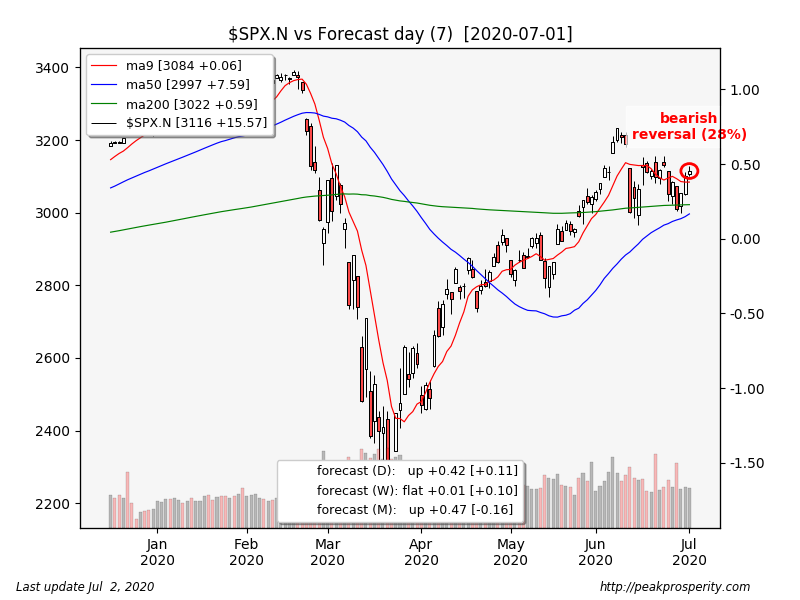 TLT dropped -0.31%. The long white candle was a bearish continuation, forecaster dropped, but remains in an uptrend. TLT is in an uptrend in the daily and weekly timeframes. The 30-Year yield rose +2.0 bp to +1.43%.

TY dropped -0.10%. The swing high candle was a reasonably strong bearish reversal (42%), forecaster dropped, but remains in an uptrend. TY is in an uptrend in the daily and weekly timeframes. The 10-Year yield rose +2.0 bp to +0.68%. 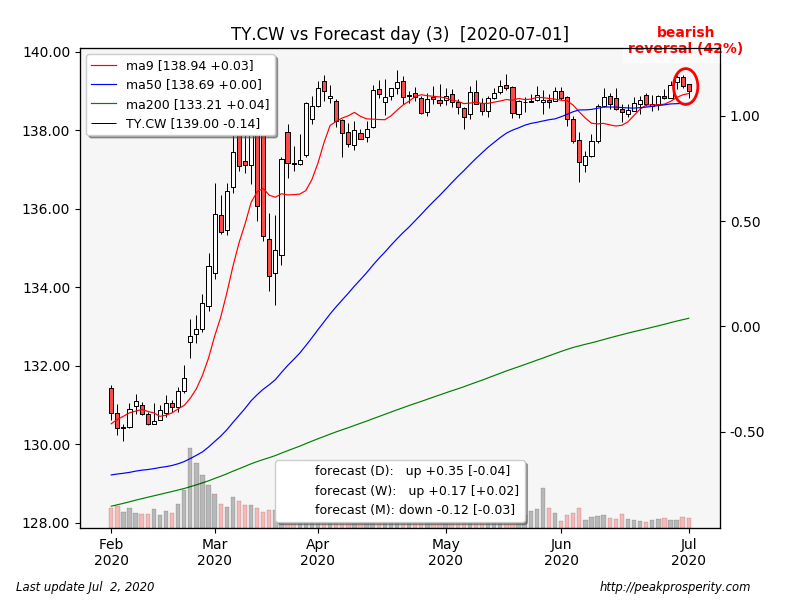 JNK dropped -0.21%. The short white candle was unrated, forecaster climbed, but remains in a downtrend. JNK is in a downtrend in both the daily and weekly timeframes. 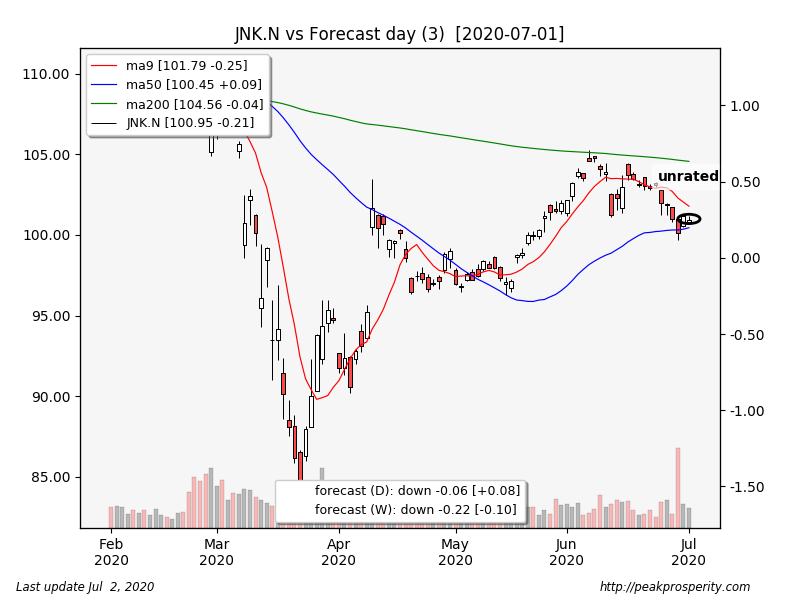 Physical ETFs are mostly in premium, so is bullion vault, and premiums for gold and silver bars have risen. People s
eem to be buying the dip in physical PM.

You just know they couldn’t let that breakout continue in gold. By the numbers, we are close to a bearish reversal in the yellow metal, while silver looks slightly stronger, and the miners actually look really good. I was surprised to see the level of dip-buying enthusiasm intraday in the mining share just as soon as the pressure on gold was released.

Hmm. Maybe that was the plan all along? Banksters wanted cheaper mining shares? I wasn’t invited to the meeting though, so I can’t say for sure. I can say that the move didn’t look natural. At least to me anyway.

Equities are looking a bit weak, as is crude and crappy debt, while copper remains quite strong. The very weak bankster equity sector XLF is hinting at a renewed move down – the recent 3-day rally in equities did not happen for XLF, nor for energy sector XLE. Armstrong says “reaction rallies in a downtrend” are 1-3 days long. This was day #3. If it weren’t for the strong copper rally, I’d be solidly in the risk off camp.

In Arizona, cases appear to be leveling off. Deaths are climbing, but on a per-100k basis, they remain 7 times lower than what we saw in New York at this same case count.

Takeaway: Arizona isn’t New York. And it won’t be. My prediction, based solely on my chart-reading skill.

Why do I pick Arizona? Because it has the scariest chart. 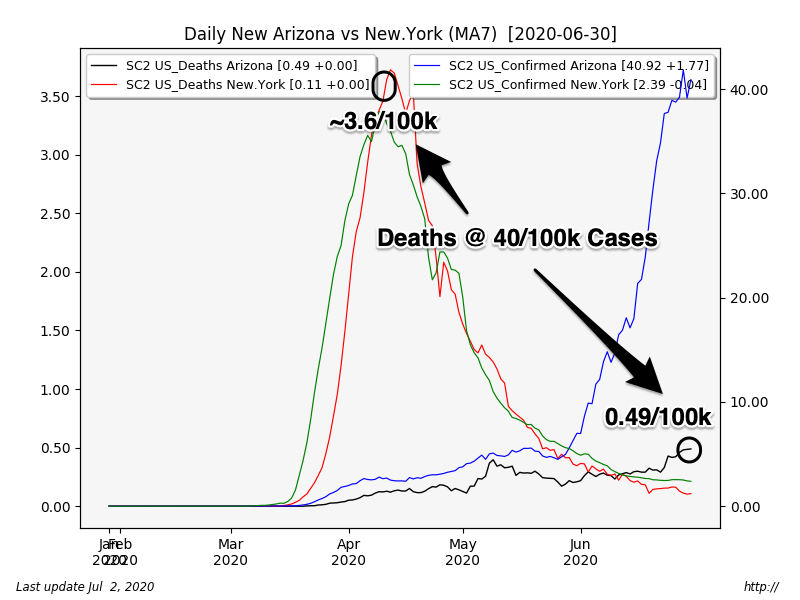 In AZ, 10 days ago, the MA7 of confirmed cases was at 33/100k. 7 days ago, the MA7 was at 37. Now, its at 41. Cases are leveling out. During this period, if we were going to see “another New York”, deaths should have been absolutely screaming higher – well into the 2-3 deaths/100k. That just hasn’t happened. Anyone who can read a chart will tell you this.

Maybe that’s why the market isn’t too concerned about what’s going on. Market is full of very skilled chart-readers who look at charts every day of their lives and try and extract meaning from moves like this, with billions on the line, who have concluded en masse that this is “move in cases” is basically a nothing-burger. The cases have detached from the fatalities, and eventually, even the media desperate to influence the 2020 election will be forced to acknowledge it.

Individually, if you have risk, when cases rise in your region, you should probably increase your personal precautions. If you are an older person with a co-morbidity, you probably shouldn’t be going out to a bar.

But as a public policy matter, shutting down the economy because of rising cases – without a meaningful increase in fatalities – seems like an over-reaction, at least to me anyways. It’s what happens when you have realtime information on only this specific illness provided to the media, which they then use to grade politicians. HIV cases? Not realtime. Cancer deaths? Not realtime. Shooting deaths? Nope. But SC2? “The Sky Is Falling!”

I do think the most serious fallout from the shutdown has yet to appear. The bankster ETF is giving us hints of what is yet to come. Watch XLF.

Equities liked the number initially, but are now down off the highs.

Gold & silver sold off initially, but are now back above the 8:30 am departure point .

Note that payrolls came early because of the July 4th holiday weekend.