For us, today’s big news was about gold’s long-awaited break above round number 1800.

Gold chopped sideways for much of the day, then took off around 9:30 am, rallied for two hours, and then chopped sideways into the close. The long white candle was a bullish continuation, and forecaster climbed, moving higher into its uptrend. Gold is in an uptrend in all three timeframes.

Gold/euros climbed +11.69 [+0.73%] to 1610.86 on moderate volume. The long white candle was a bullish continuation, and forecaster climbed, moving higher into its uptrend. Gold/euros is in an uptrend in all three timeframes.

Gold broke out and closed conclusively above 1800 today – at least according to my calendar-weighted price. (The front month contract broke out briefly intraday, then retreated). This is huge news, as the next step for gold is a close above the 1910 all time high set back in 2011.

Gold is in a strong uptrend in both daily and weekly timeframes. 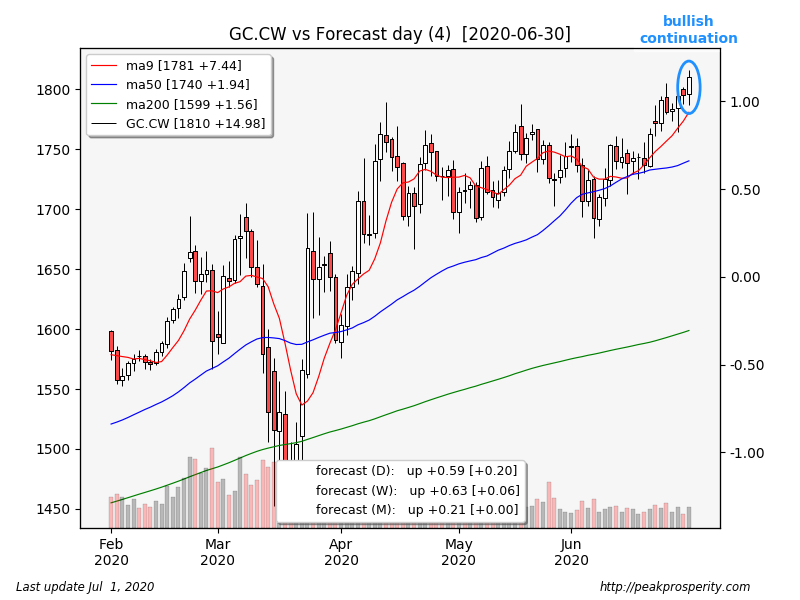 Silver rallied right along with gold, with all of the gains happening in the morning in New York. The long white candle was a bullish continuation, and forecaster climbed, moving higher into its uptrend. Silver is in an uptrend in all three timeframes.

Silver’s uptrend is growing stronger. Oddly, the shorts covered today. If this trend continues, this would be extremely bullish, as normally the shorts only cover on the declines. Why bullish? Short-covering on the rallies says the shorts are terrified, which is very unusual for “smart money”. Normally “smart money” goes short on the rallies, and covers on the declines. A reversal of this would signal – possibly – a replay of what we saw in 2011. That’s the last time that the commercials covered in any meaningful way on rising prices. 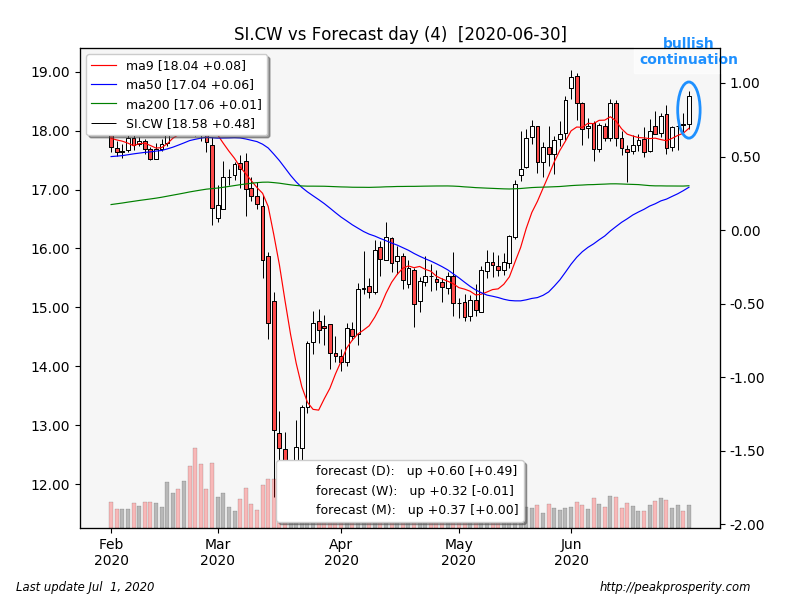 Miners also rallied in the morning, then moved slowly higher for the remainder of the day. GDX rallied +3.15% on moderate volume, and GDXJ moved up +3.29% on moderately heavy volume. XAU gained +3.55%, the strong line candle was a bullish continuation, and forecaster climbed, moving higher into its uptrend. XAU is in an uptrend in all three timeframes.

Miners did very well today; they are on the edge of a breakout above the May 2020 highs – which would be a new 8-year high. The miner uptrend is back to looking strong. 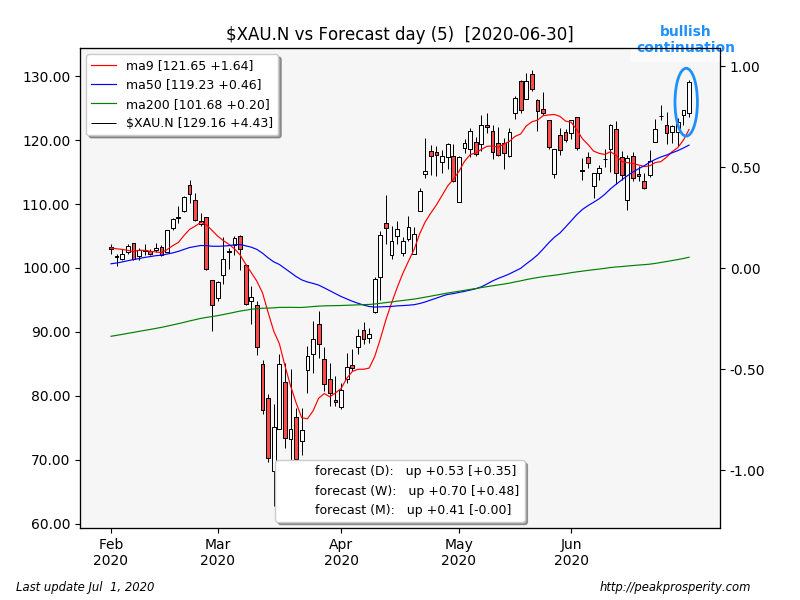 Copper climbed +0.03 [+1.12%] to 2.72 on moderate volume. The opening white marubozu candle was a bullish continuation, forecaster climbed, moving higher into its uptrend. Copper is in an uptrend in all three timeframes.

Today marked a new high for copper; we are back to January 2020 prices. Copper is now in a strong uptrend. This is an ongoing risk-on signal. 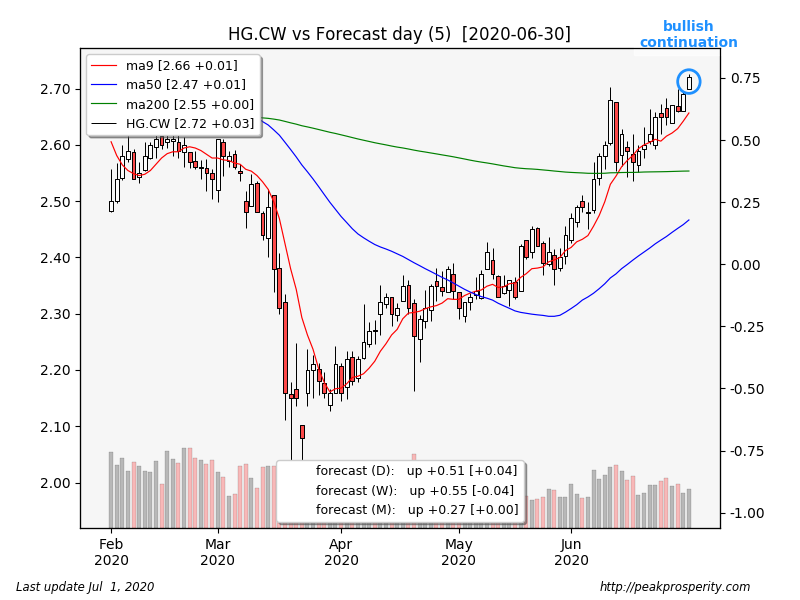 The buck moved down -0.15 [-0.15%] to 97.35 on moderate volume. The high wave candle was a bullish continuation, forecaster dropped, falling into a state of no-trend. The buck is in a downtrend in both the weekly and monthly timeframes.

The buck remains above the 9 MA; it looked like a failed rally today. It wasn’t a bearish reversal; that’s about the most positive thing we can say. Short & medium term trends for the buck remain extremely weak; it could still go either way right now. 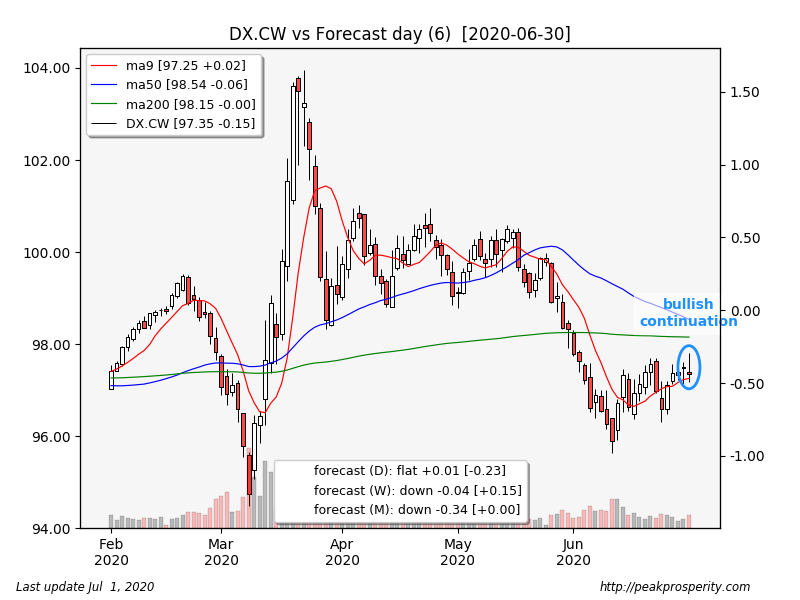 Crude rose +0.18 [+0.45%] to 39.84 on moderate volume. The bearish doji star candle was a reasonably strong bearish reversal (41%), but forecaster climbed, moving higher into its uptrend. Crude is in an uptrend in all three timeframes.

This was a fairly bearish candle print, as doji star patterns go. Daily forecaster could be ready to reverse. Crude is looking a bit weak right now. It remains above the 9 MA, but not by much. 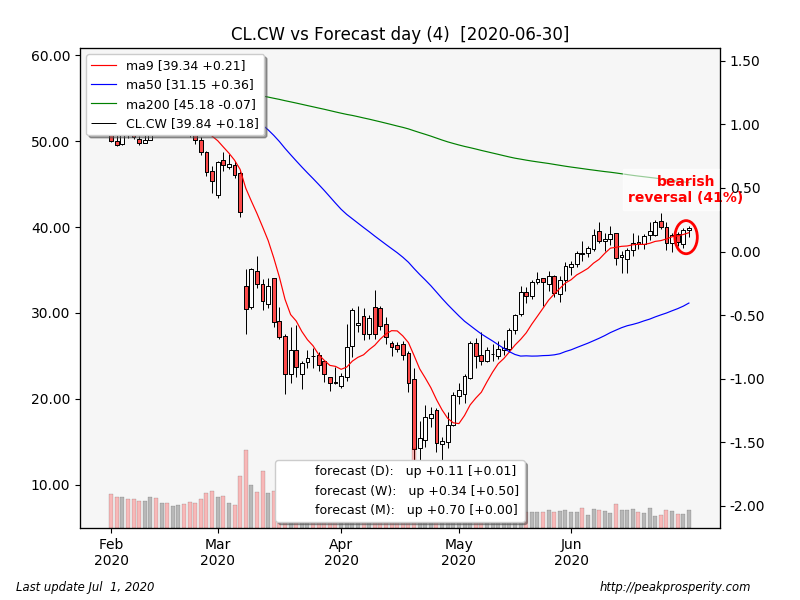 SPX rallied +47.05 [+1.54%] to 3100.29 on moderate volume. The swing low2 candle was neutral, forecaster climbed, rising into an uptrend. SPX is in an uptrend in the daily and monthly timeframes. 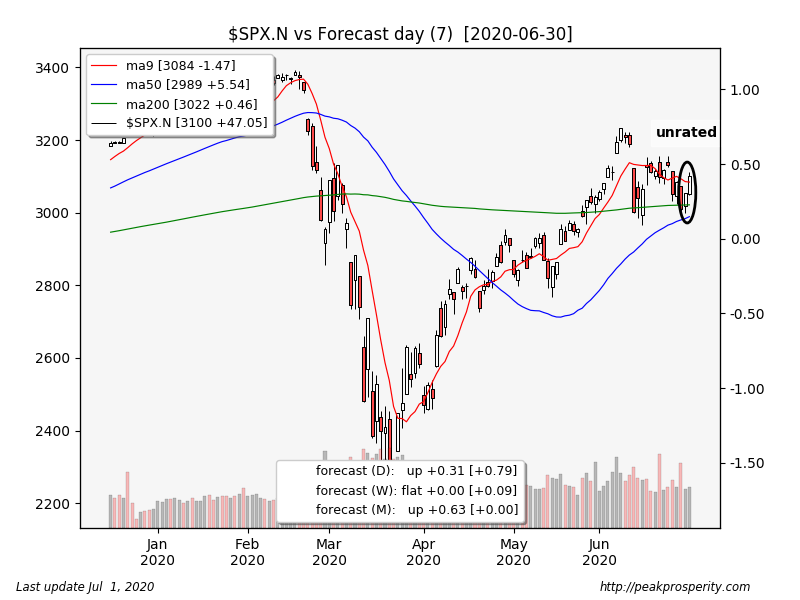 TLT dropped -0.49%. The confirmed bearish nr7 candle was a possible bearish reversal (31%), forecaster dropped, but remains in an uptrend. TLT is in an uptrend in the daily and weekly timeframes. The 30-Year yield rose +2.0 bp to +1.41%.

Bonds might be headed lower, although today’s reversals were pretty weak. I suppose it will depend on what happens with equities. 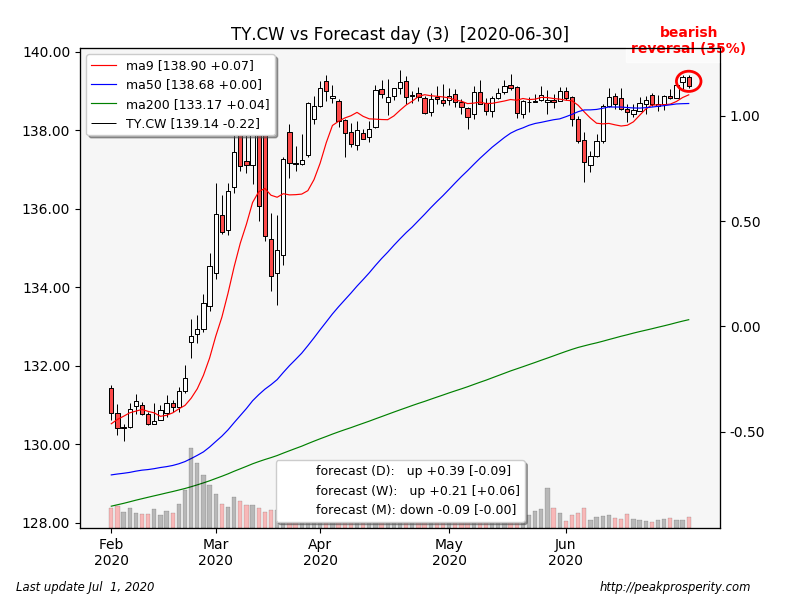 JNK rallied +1.03%. The swing low candle was a reasonably strong bullish reversal (45%), forecaster climbed, but remains in a downtrend. JNK is in a downtrend in both the daily and weekly timeframes.

This could be a bullish reversal for crappy debt. 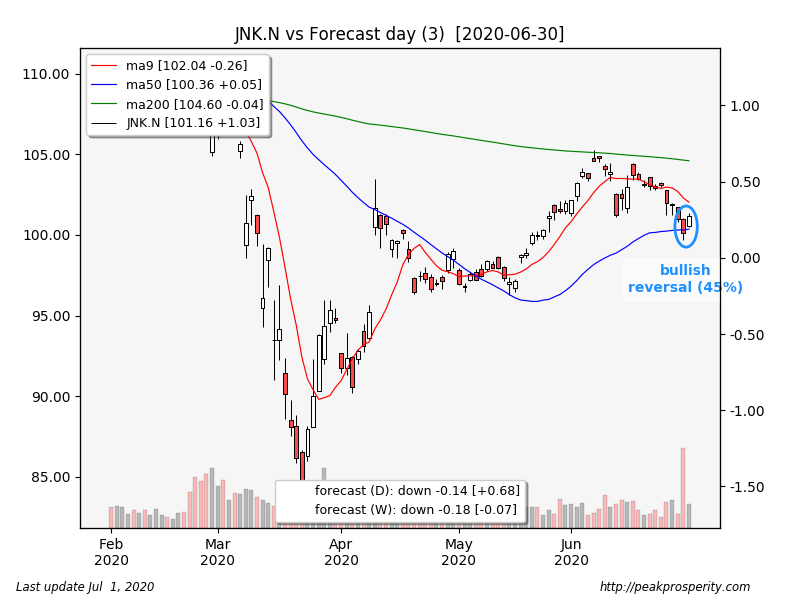 BV premiums remain mostly flat, discounts increased a bit in the physical ETFs, and premiums have dropped a bit for physical gold and silver.

Why did gold take off in the morning? No idea. Equities rallied at roughly the same time. Regardless, gold’s break above 1800 was a huge milestone. The next waypoint: the 1910 all time high dating back to 2011. The mining shares appear ready to break above their previous 8-year high set just last month.

Silver’s activity was even more interesting – not from a price standpoint, but from the action in the open interest. While the shorts jumped into gold in a fairly big way, shorts fled silver, which is a very unusual event during a large rally. Either the silver shorts are now scared that silver is really going to scream higher, or perhaps some long standing “long gold/short silver” trades are being unwound. Either way, it is, I think, very bullish for silver. The gold/silver ratio at 97 means that silver is still extremely cheap.

Did equities reverse today? The ongoing rally in copper says yes as does crappy debt, while crude says “maybe.” I’m not sure.

Some context from an insider (an anonymous source) suggests that the surge of hospitalizations in Texas are not specifically COVID-related. My favorite comment: “The hospital ICUs are filled with really sick people with non-covid issues. They didn’t come in earlier because they were scared and now they are super sick.”

That sure lines up with my experience. Did you feel like going to the hospital in the middle of a pandemic? Me either.

Folks on my facebook feed are trying really hard to use case counts as an indictment of the administration. And yet markets – appear – to be looking through this. At least for now anyways. Could change tomorrow.

I mean, if it weren’t for crude and copper, I’d say this was just a product of intervention. But the other risk assets are lined up in support. At least mostly anyways.

That’s the tea-leaf reading for today.

The gold miners are going to ZERO! This breakout is pathetic. Only an idiot would be bullish on the miners.

Get out while you can!

I’m trying to replicate Skidmore’s Treasury analysis.  I’ll report back when I have something either way.

I’m actually really grateful for the reversal.  If Skidmore is right, I will be perfectly happy with lower prices for gold & silver.  Its a gift, in fact.  I’d rather buy the dips than chase rising prices.

Note: the senior miners haven’t retraced yesterday’s move, even though gold has already done so.  The juniors are doing even better.

Well obviously my reverse jinx on the miners didn’t work.

Dr. Skidmore’s work is really fascinating. Is my understanding correct that Skidmore calculated the churn to be around 16 Trillion so there is roughly 50 Trillion in issuance/re-issuance that is unaccounted for?

Can’t wait to see what your analysis shows. Dr. M should interview Skidmore because the guy in that interview wouldn’t shut up and let the man talk.

Dr. M should interview Skidmore because the guy in that interview wouldn’t shut up and let the man talk.

Greg Hunter is really hard for me to listen to.  How in the world does he get the guests he gets?  CAF, Armstrong, Skidmore….I could go on.