Gold chopped sideways in a narrow range today. The short black/NR7 candle was a bullish continuation, forecaster dropped, but remains in an uptrend. Gold is in an uptrend in all three timeframes.

Gold/euros inched down -1.23 [-0.08%] to 1599.17 on moderately light volume. The spinning top candle was a possible bearish reversal (30%), forecaster dropped, but remains in an uptrend. Gold/euros is in an uptrend in all three timeframes.

Not much happened today with gold.

Silver looked pretty similar to gold; it just chopped sideways in a narrow range as well. The doji candle was a possible bearish reversal (33%), forecaster dropped, but remains in an uptrend. Silver is in an uptrend in all three timeframes.

Silver saw a fair amount of short-covering today; it is a bit of an odd place to see that much short-covering. I will take this as a positive sign. Silver remains above the 9 MA. 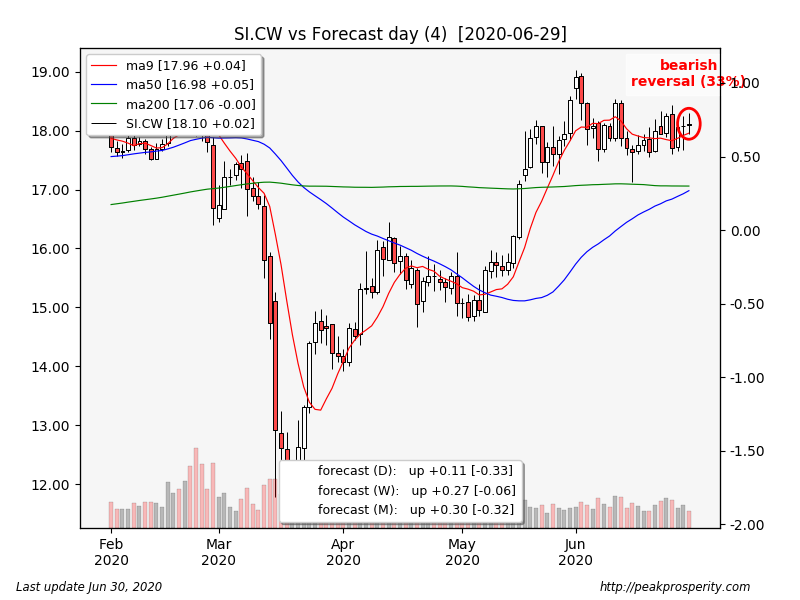 The miners looked reasonably strong today; it always looks good when they outperform the metals. 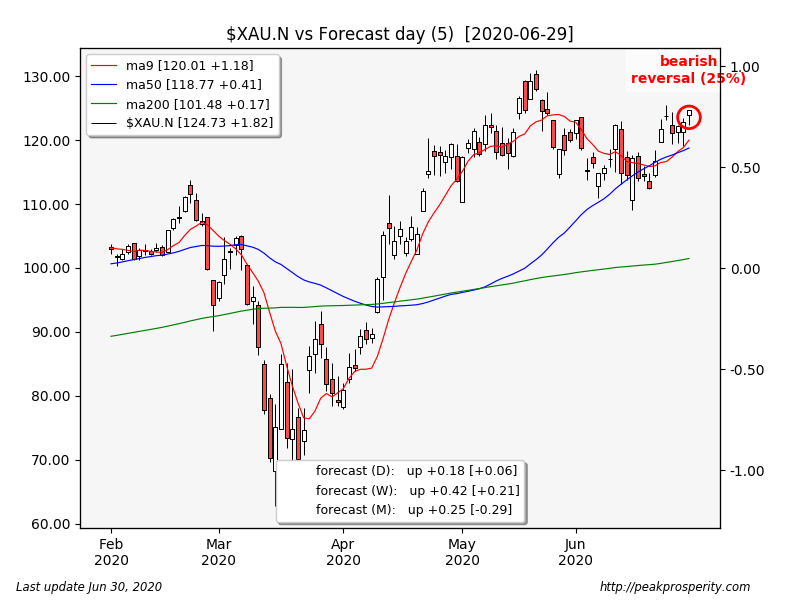 Platinum managed to crawl back above the 9 MA today, and it moved back into an uptrend. Cautious optimism for platinum. Palladium looks a little better than before, but it remains in a downtrend.

Copper climbed +0.03 [+1.13%] to 2.69 on moderate volume. The short white candle was unrated, forecaster climbed, moving higher into its uptrend. Copper is in an uptrend in all three timeframes.

Today marks a new 6-month closing high for copper; short and medium term trends for copper are strong at this point. That’s a risk on signal. 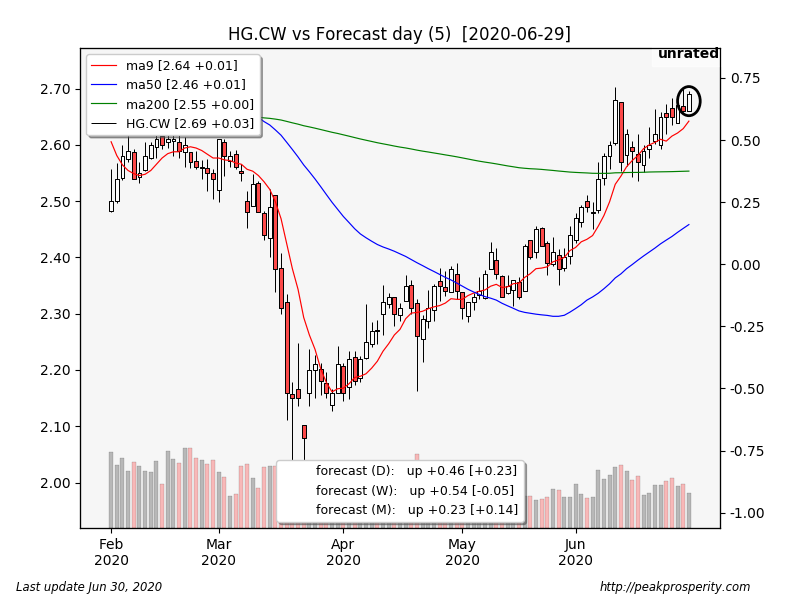 The buck climbed +0.10 [+0.10%] to 97.50 on moderately light volume. The doji candle was a bearish continuation, forecaster climbed, moving higher into its uptrend. The buck is in a downtrend in both the weekly and monthly timeframes.

The buck may be putting in a low. Slowly. In fits and starts. 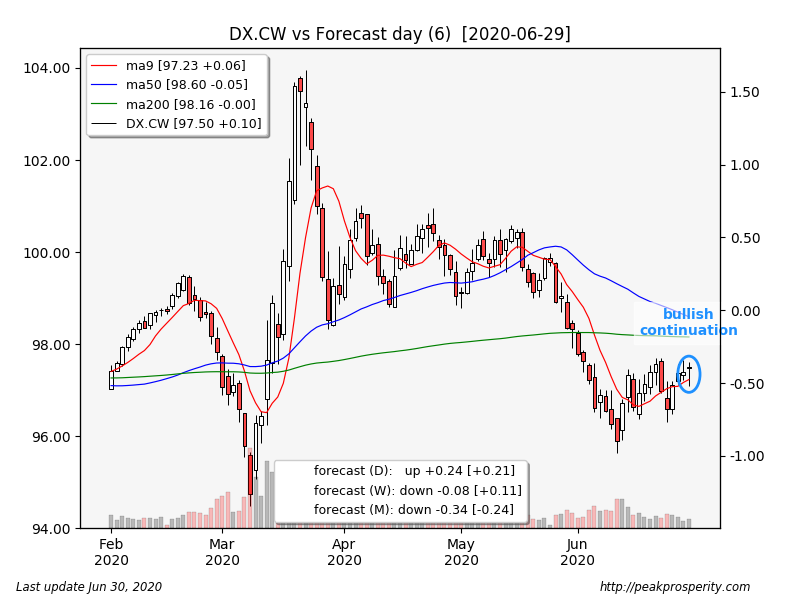 Crude shot up +1.46 [+3.82%] to 39.66 on moderate volume. The confirmed bullish nr7 candle was a reasonably strong bullish reversal (44%), forecaster climbed, rising into an uptrend. Crude is in an uptrend in all three timeframes.

This was a reasonably strong candle print, and forecaster liked it too. Is crude back in an uptrend? Early signs say yes. If so, this would be risk-on for equities also. 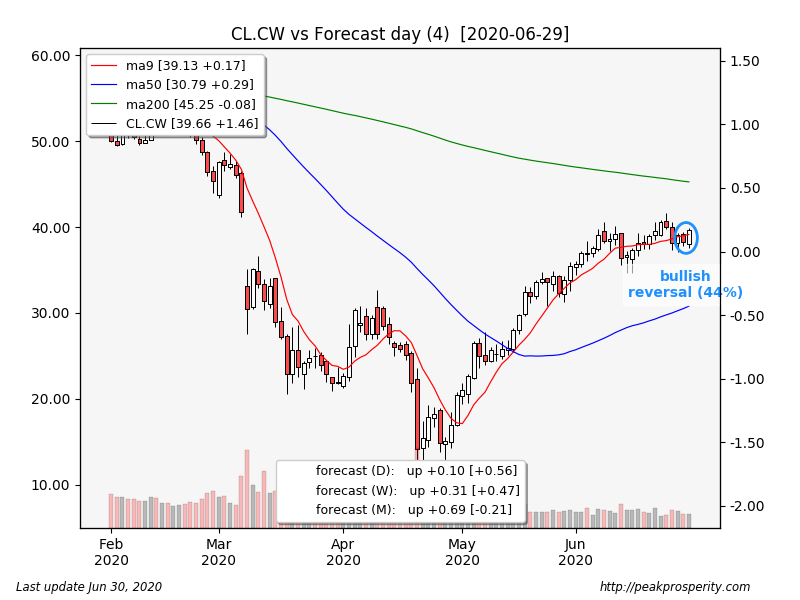 SPX rallied +44.19 [+1.47%] to 3053.24 on moderately light volume. The bullish harami candle was a bearish continuation, forecaster climbed, but remains in a downtrend. SPX is in a downtrend in both the daily and weekly timeframes.

The harami print was weak, as harami prints often are. Forecaster wasn’t impressed either. It looks like nothing terrible happened over the weekend, so money came back into the market – but not as much as left it last Friday. 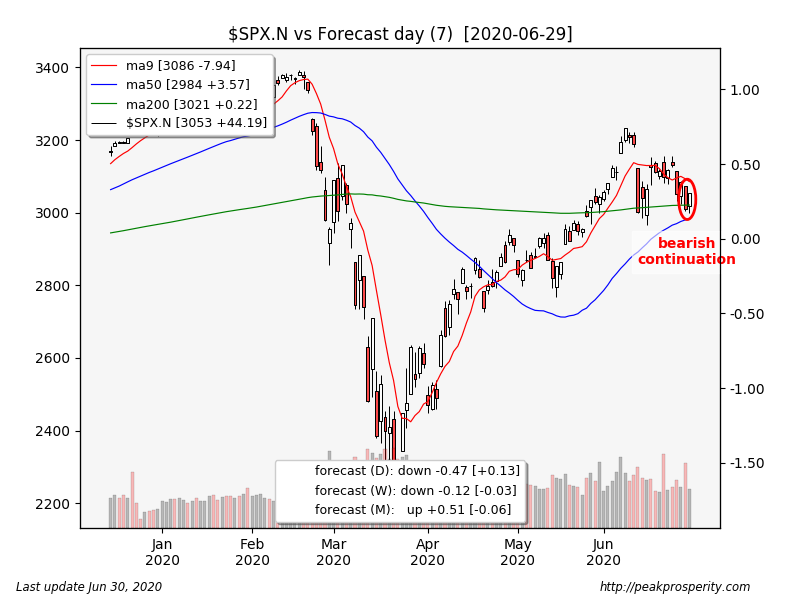 TLT dropped -0.31%. The bearish harami candle was a bullish continuation, forecaster dropped, but remains in an uptrend. TLT is in an uptrend in the daily and weekly timeframes. The 30-Year yield rose +3.0 bp to +1.40%.

TY climbed +0.14%. The spinning top candle was a bullish continuation, forecaster climbed, moving higher into its uptrend. TY is in an uptrend in the daily and weekly timeframes. The 10-Year yield was unchanged at +0.0 bp to +0.64%. 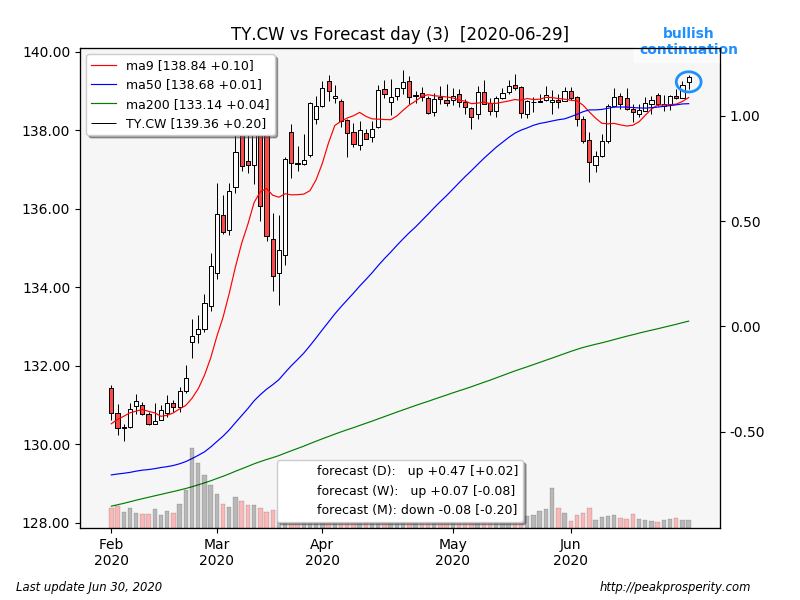 JNK dropped -0.82%. The long black candle was a possible bullish reversal (34%), forecaster climbed, but remains in a downtrend. JNK is in a downtrend in both the daily and weekly timeframes.

This was a risk off signal from crappy debt; it is hinting that equity prices may have further to fall. JNK ended the day below the 50 MA. 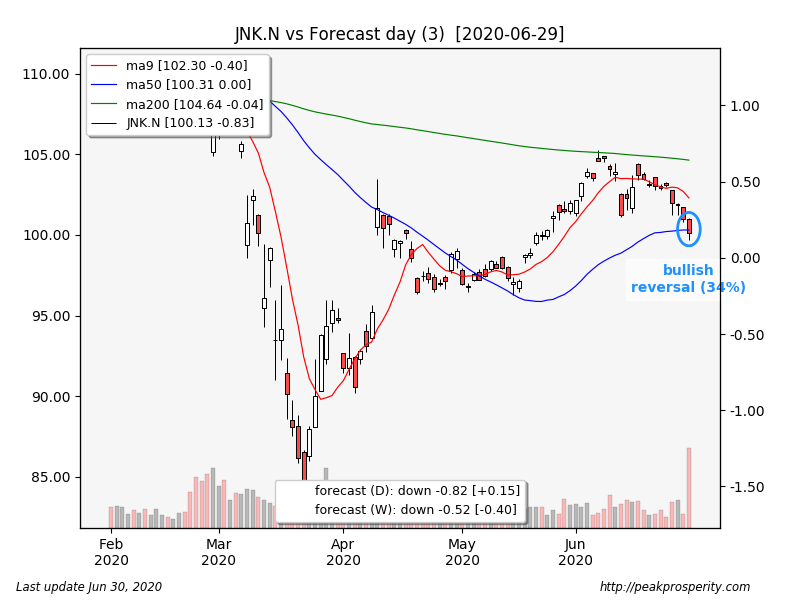 Physical ETFs are now mixed; PHYS has moved into premium. BV is in a slight discount. Physical silver remains at a substantial premium.

Risk assets are giving off mixed signals; both crude and copper did well, SPX was somewhere in the middle, while crappy debt sold off, making a new low. Is this just a temporary bounce in a downtrend for SPX? While the daily Advance Ratio looked somewhat bullish, the 5MA of the ratio is not quite there yet. It feels like the downtrend remains in place.

Gold and silver just moved sideways, while the miners moved slightly higher. The miners are starting to strengthen; Monday was a new monthly closing high.

In our guinea pig state, Arizona, cases dropped down off the highs; it has been a one day decline so far, to 39/100k per day. It is too soon to tell if this marks the top. 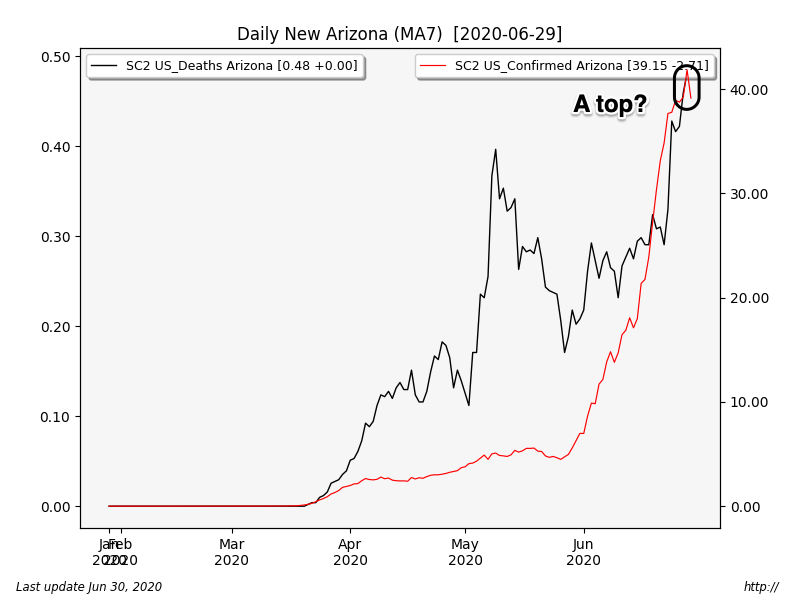 Meanwhile, Fauci tells us that herd immunity is “unlikely” if too many people refuse a vaccine. The vaccine, if you remember, that doesn’t actually work, but might help to reduce symptoms. Article further talks about how natural herd immunity just isn’t possible with the corona virus.
https://www.miamiherald.com/news/coronavirus/article243870422.html

Sounds like a vaccine mandate is being pushed by someone.

New Jersey probably has herd immunity already also; ad hoc antibody tests reveal a rough 15-25% positivity rate in the state. The chart also looks a whole lot like New York. Article below also reveals that many people that tested negative for antibodies were living with family members that had tested positive for COVID. Possibly: some people might just be immune?

CA Gov Newsom says he will be “stepping up enforcement” in LA county. Enforcement with…all those defunded police? It will be fascinating to watch this one play out, especially after all the protests & looting that was winked at by the gang in charge.

The WHO tells us, “the worst is yet to come.” Ah yes, the WHO. Wait for the vaccine.

So far, however, risk assets don’t seem to mind all that much.

If we close above 1800, things could really start to get interesting, and in the near term, too.