Gold mostly chopped sideways in a narrow range today. The spinning top candle was neutral, but forecaster fell, dropping into a downtrend. Gold is still in an uptrend in the weekly and monthly timeframes.

Gold/euros climbed +7.66 [+0.48%] to 1589.05 on moderately light volume. The spinning top candle was a bearish continuation, forecaster climbed, moving higher into its uptrend. Gold/euros is in an uptrend in all three timeframes.

I’m not sure how seriously to take the forecaster reversal today; gold/Euros remains in a reasonably strong uptrend. The candle was not specifically bearish or bullish. 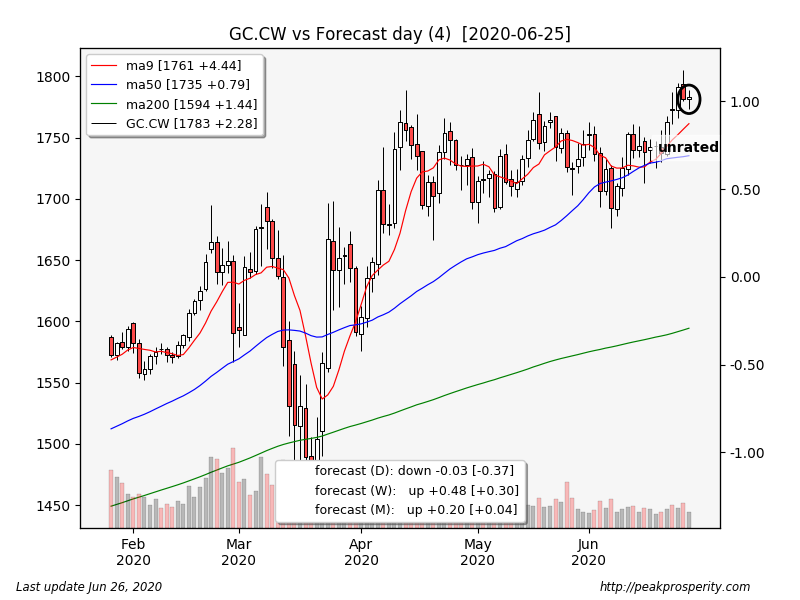 Silver moved mostly sideways until about 8:30 am, after which it took off higher, rallying steadily into the close. The bullish harami candle was a bearish continuation, forecaster climbed, rising into an uptrend. Silver is in an uptrend in all three timeframes.

The harami pattern wasn’t specifically bullish, so my code thinks it is a “continuation”; silver did close back above the 9 MA, which is a positive sign, and forecaster seems happy with today’s move. Silver looks cautiously positive. 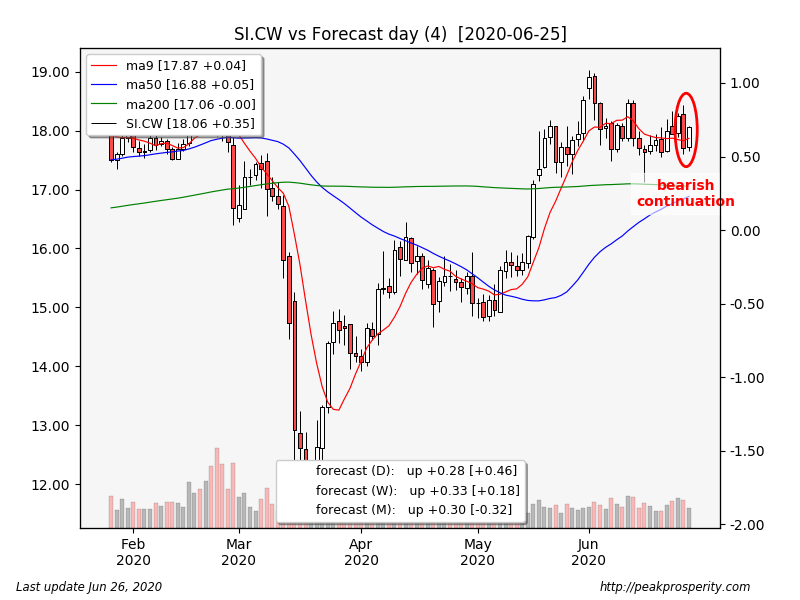 The miners fell at the open, chopped sideways for most of the day, then rallied during the last hour, closing at the highs. It was a narrow trading range. GDX rose +0.63% on moderately light volume, and GDXJ rallied +0.79% on moderately light volume also. XAU moved up +1.00%, the spinning top candle was unrated, but forecaster climbed, rising into a state of no-trend. XAU is in an uptrend in the weekly and monthly timeframes.

Right now, XAU remains above that 9 MA, which is a good sign. Dips are being bought. It looks reasonably positive. 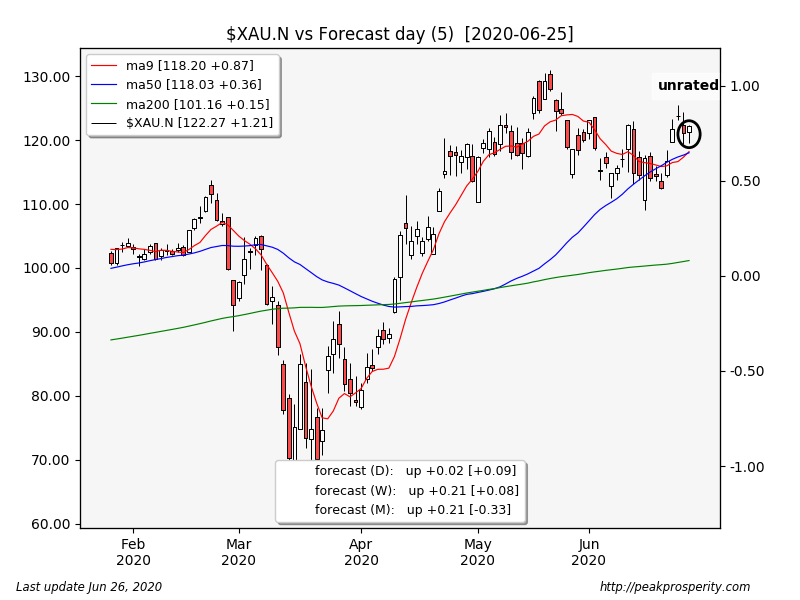 Copper climbed +0.02 [+0.75%] to 2.67 on moderate volume. The white marubozu/NR7 candle was unrated, forecaster climbed, moving higher into its uptrend. Copper is in an uptrend in all three timeframes.

Copper had a reasonably strong day; it is giving us a risk-on signal. 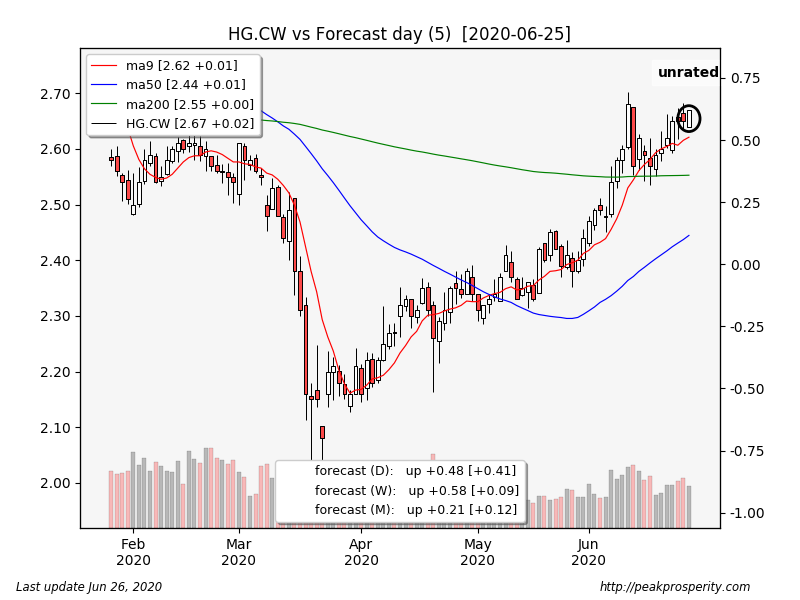 The buck climbed +0.26 [+0.27%] to 97.38 on moderately light volume. The spinning top candle was a bullish continuation, forecaster climbed, rising into an uptrend. The buck is in a downtrend in both the weekly and monthly timeframes.

Today’s move took the buck more convincingly back above its 9 MA, which is a positive sign. Shorter term trends for the buck remain weak. 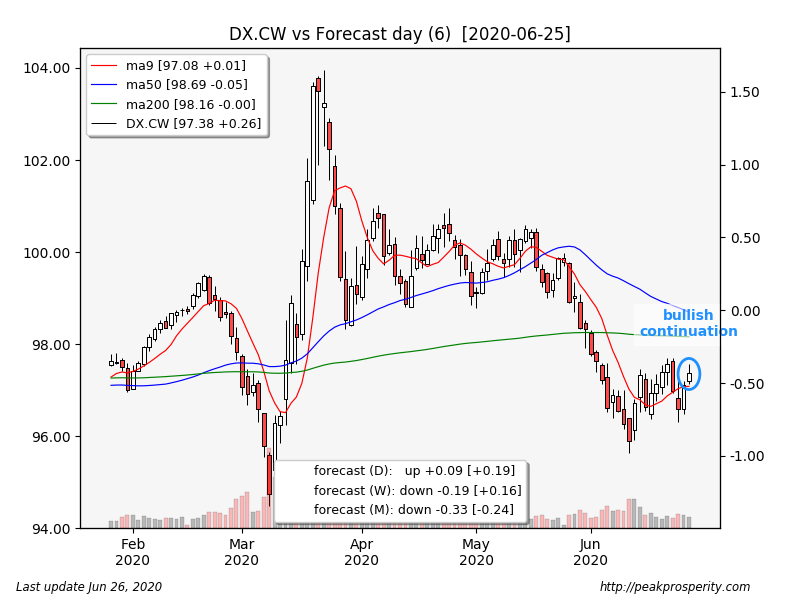 Crude rallied +0.96 [+2.52%] to 39.07 on moderate volume. The closing white marubozu candle was a bearish continuation, forecaster climbed, but remains in a downtrend. Crude is in an uptrend in the monthly timeframe.

Crude sold off until 8:30 am – a lot like what happened with silver – after which it took off, eventually ending the
day at the highs. Daily downtrend remains in place, but this was a positive move for crude; it ended the day back above the 9 MA. 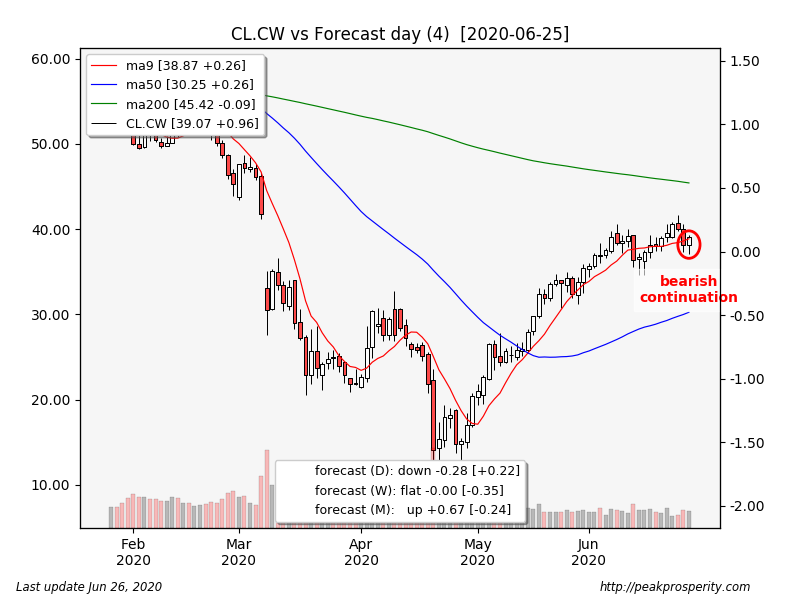 SPX rallied +33.43 [+1.10%] to 3083.76 on moderate volume. The closing white marubozu candle was a bearish continuation, forecaster dropped, moving deeper into its downtrend. SPX is in an uptrend in the weekly and monthly timeframes.

SPX sold off in the futures markets overnight, but they put in a low around 3 am; even so, much of the gains came in the last hour of the trading day in New York. Today’s candle print was not a bullish reversal, and forecaster was not impressed either. The daily downtrend remains intact, at least for now. 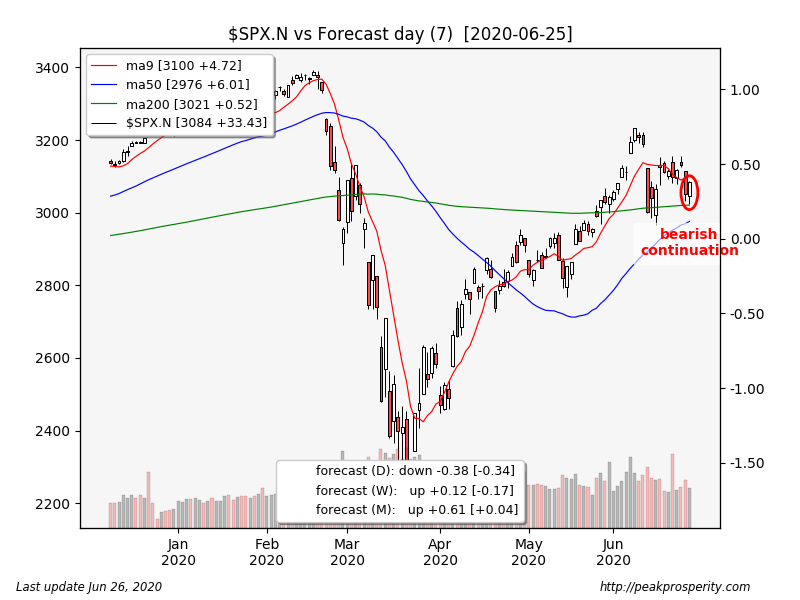 TLT climbed +0.29%. The closing black marubozu candle was a bullish continuation, forecaster climbed, moving higher into its uptrend. TLT is in an uptrend in the daily and weekly timeframes. The 30-Year yield fell -2.0 bp to +1.42%.

TY inched down -0.04%. The bearish harami candle was a reasonably strong bearish reversal (47%), forecaster climbed, moving higher into its uptrend. TY is in an uptrend in the daily timeframe. The 10-Year yield fell -2.0 bp to +0.67%. 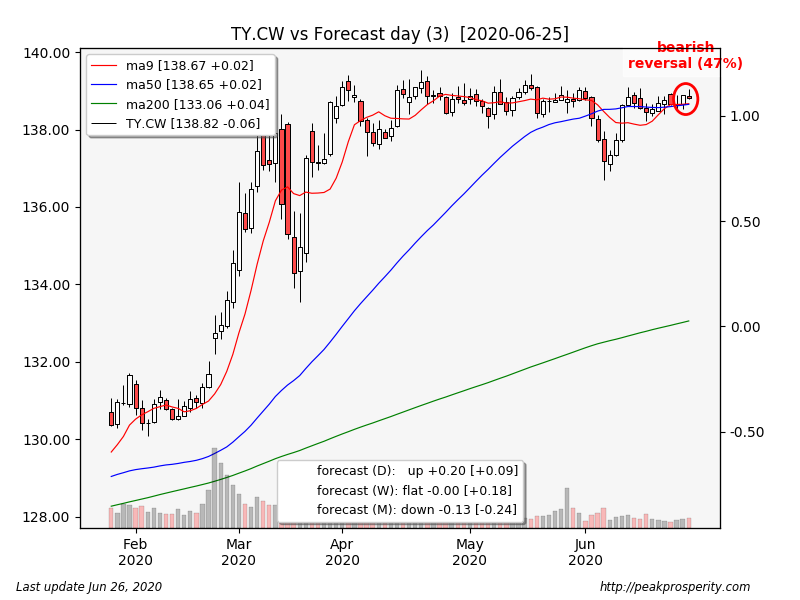 JNK dropped -0.07%. The bullish doji star candle was a bearish continuation, forecaster climbed, but remains in a downtrend. JNK is in a downtrend in both the daily and weekly timeframes.

It was not a bullish reversal for crappy debt. 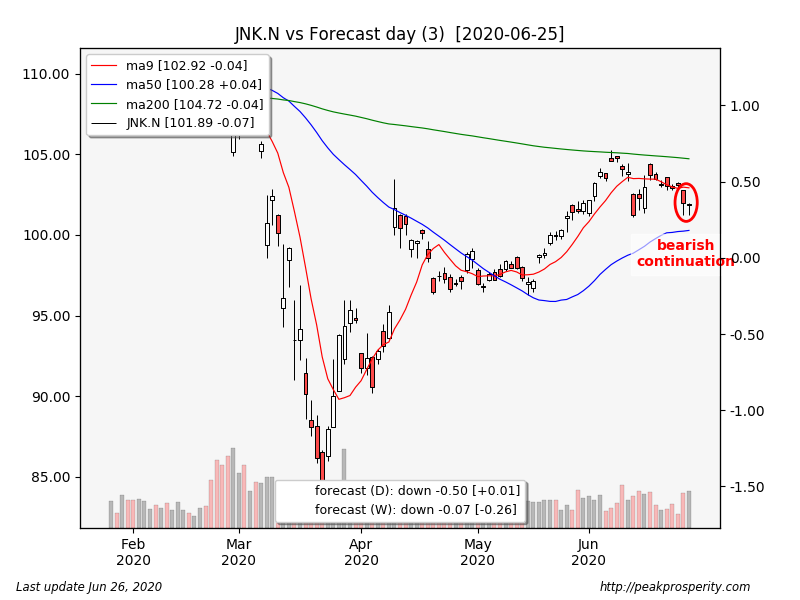 Discounts remain in the physical ETFs, BV is in a slight premium, while shortages remain in silver larger bars.

Something interesting happened at 8:30 am; it drove both crude and silver higher, and gold also, but to a lesser extent. There were a flurry of reports released at that time, pick one of: Durable Goods Orders, US GDP, Jobless Claims, US US International Trade/Goods, Corporate Profits, US Retail Inventories, US Wholesale Inventories.

These days, anything that helps crude oil prices also helps equities, at least to some degree. If crude doesn’t correct, equities probably won’t correct either.

The virus still matters; summer doesn’t seem to help, possibly because of that 20th century marvel, Air Conditioning, which not only makes summertime life in humid climates bearable, but also happens to help spread SC2. Good news, bad news I suppose. It also suggests that a public policy response of “locking people down in their air-conditioned homes” is – perhaps – not the best solution to the problem.

Arizona is the new US hotspot. I’m going to leave you with a chart comparing New York, and Arizona, with both regions numbers normalized to 100k population. To me, it looks like we’ve figured out how to deal with the problem. That, and we’re testing the 20-somethings now too. That’s a good thing, regardless of what our fine President says, because when those younger people realize they are positive, the 99% of non-sociopaths who test positive end up changing their behavior as a result. And that saves lives – all without locking *everyone* down. Which seems counterproductive in a lot of different ways. 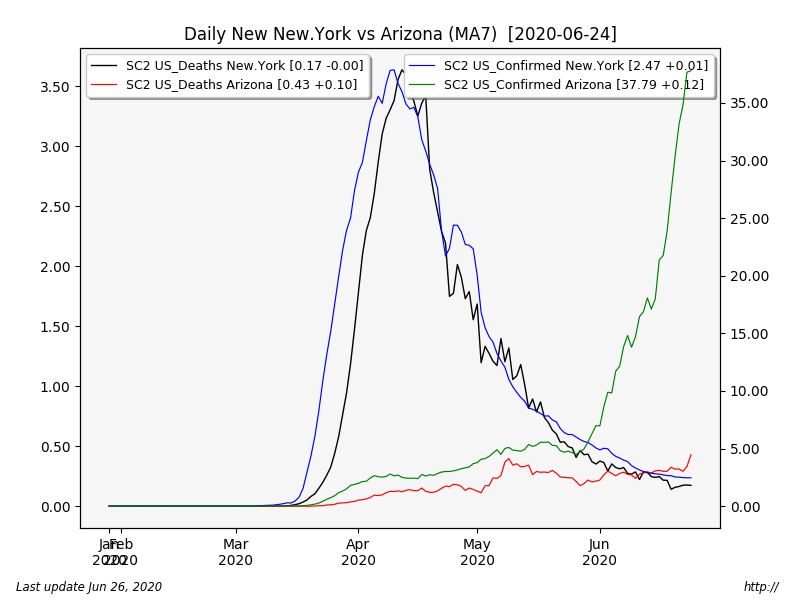 File this in the “who woulda thought” box.

Who woulda thought that the extremely popular Chinese-made app TikTok hoovers up data from the IOS clipboard and sends that clipboard data right back to the mother ship in China?

Well, apart from the requirement in law that every Chinese company must cooperate with the state security apparatus if requested – and presumably, all are so-requested – this must come as a total shock to the rest of the world.

My guess: each and every Chinese-made app acts as spyware for the CCP.  If you only guessed this was the case in the past, you now have hard evidence.

I do not use any CCP apps – excuse me, I mean apps developed in China – on my phone for this very reason.  The NSA has a dossier on me already.  I’d prefer the CCP not get one too.

Apps or devices I avoid: TikTok, WeChat, Zoom, Hikvision cameras, Huawei equipment.  All the data they can hoover up, via security holes, and that pass through each device, is sent back to the mother ship.

Meanwhile, some real estate agents report a “mad rush” of wealthy buyers to get out of the city center and into the wealthy suburbs of San Francisco. These are just the early movers. The exiles of more modest means will come later. Not surprisingly, the median rent in San Francisco for a one-bedroom apartment dropped 9.2 percent in May, compared year-over-year.

But these remain a small percentage of the overall population. Most homeowners, families, and business owners need time to move their businesses, sell their properties, and be convinced it’s time to move on.

None of this should be interpreted, however, as a trend away from metropolitan areas overall. There appears to be little risk that large numbers of Americans will be quitting metro areas for rural villages and towns. Some will. But most will notice that metro areas still have most of the jobs, most of the cultural institutions, and most of the health care services. What can’t be said is that core cities have a monopoly on these resources. In recent decades, suburbs and small cities have increasingly become places that host a wide variety of sports teams, museums, convention centers, hospitals, and more. Metro areas are still a good place to be. But old core cities? Not so much.

As a boots on the ground Bay area guy, what’s your take on folks leaving the San Francisco needles and poop for greener pastures?  Does that mean moving south to Santa Clara Valley cities or bailing California?  Locally, in the Central Valley, real estate is really doing well.