Gold had a bit of a volatile day, first spiking higher, then lower during the London session, then mostly recovering during US trading hours. The long black candle was a possible bearish reversal (37%), forecaster fell, dropping into a downtrend. Gold is still in an uptrend in the weekly and monthly timeframes.

Gold/euros fell -0.97 [-0.06%] to 1550.42 on moderately light volume. The long black candle was neutral, forecaster dropped, but remains in an uptrend. Gold/euros is in an uptrend in the daily and monthly timeframes.

Mostly, it was a failed rally by gold, which ended the day right at the 9 MA; gold is now in a mild downtrend. Gold/Euros is still in an uptrend, but a very weak one. Gold really could go either way at this point. 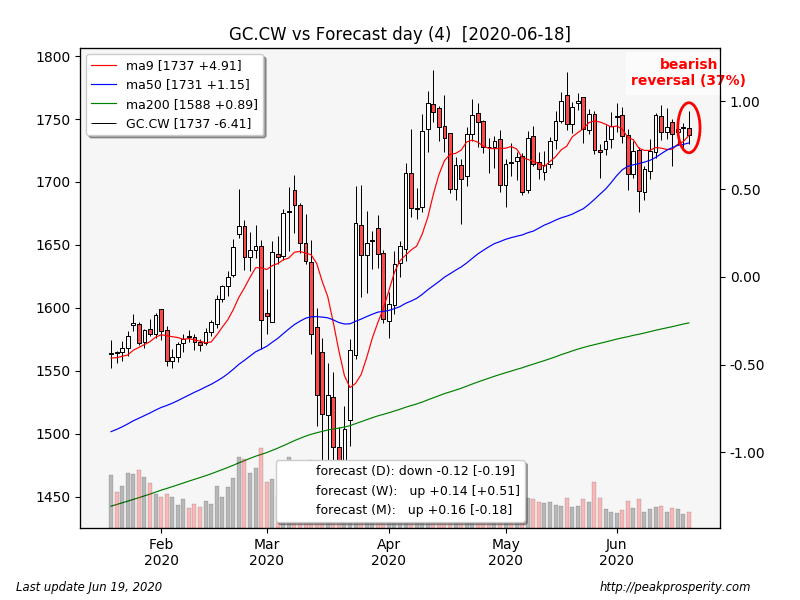 Silver rallied early in London trading, then sold off through the US open, eventually closing near the lows. The confirmed bearish nr7 candle was neutral, but forecaster fell, dropping into a state of no-trend. Silver is still in an uptrend in the monthly timeframe.

Looks like a failed rally today for silver too; while the longer term trend remains pointing higher, short and medium term trends appear to be at an inflection point. As with gold, silver could go either way right now. At least the candle print wasn’t bearish. 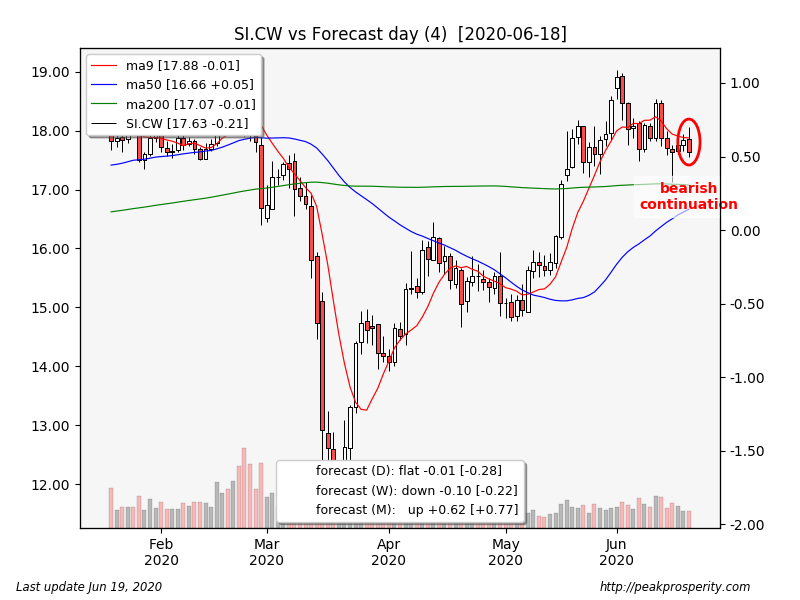 The miners spiked higher in the first 10 minutes of trading, then spent the rest of the day slowly selling off. GDX fell -1.28% on moderately light volume, and GDXJ dropped -1.77% on moderately light volume. XAU moved down -1.61%, the confirmed bearish nr7 candle was neutral, forecaster fell hard, dropping into a downtrend. XAU is in a downtrend in both the daily and weekly timeframes.

Today marks a new multi-month closing low for the mining shares. Miners are now in a daily and weekly downtrend. They continue to weaken. 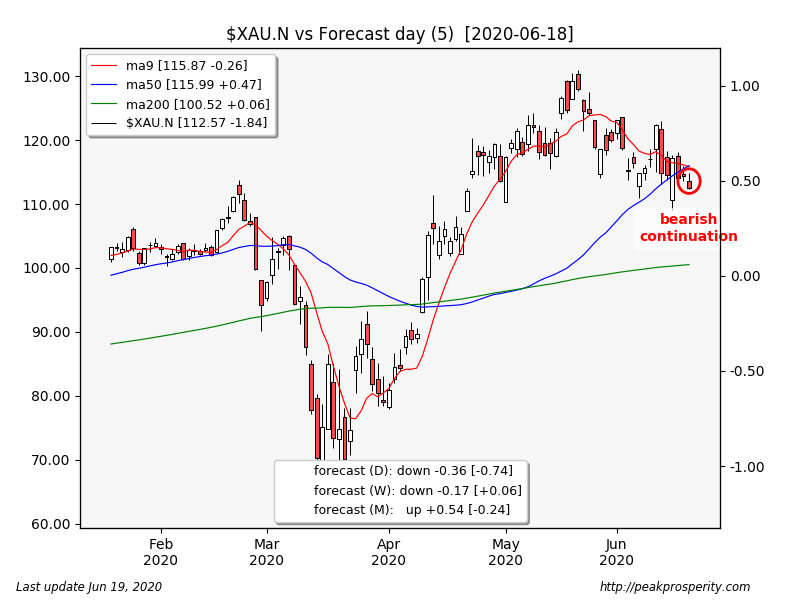 Copper moved up +0.01 [+0.39%] to 2.60 on moderate volume. The high wave candle was a possible bearish reversal (35%), but forecaster climbed, rising into an uptrend. Copper is back in an uptrend in all three timeframes.

Copper closed right at its 9 MA. Today’s bearish reversal was not a particularly strong print. Copper is looking substantially stronger than most of the other metals. 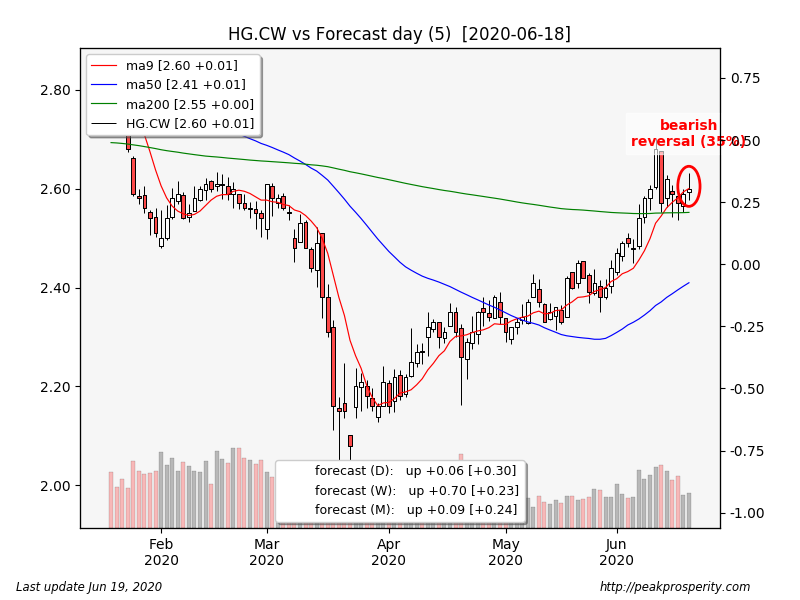 The buck climbed +0.25 [+0.26%] to 97.39 on moderately light volume. The long white candle was a bullish continuation, and forecaster climbed, moving into an uptrend. The buck remains in a downtrend in both the weekly and monthly timeframes.

Today was a new 2-week high for the buck. It now appears as though the buck is slowly starting to recover. 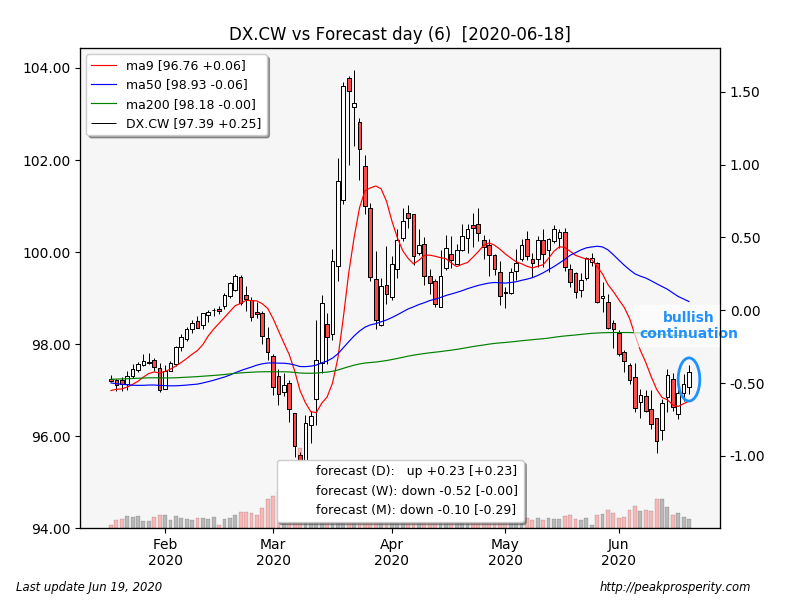 Crude rallied +1.04 [+2.74%] to 39.01 on moderate volume. The closing white marubozu candle was a bullish continuation, and forecaster climbed, moving higher into its uptrend. Crude is in an uptrend in all three timeframes.

Crude seems to have figured out which way price is moving: higher. Perhaps one of the reasons is, China is buying up oil on the cheap, now, to fill up its strategic reserves.

Crude is now back in a reasonably strong uptrend in all 3 timeframes. 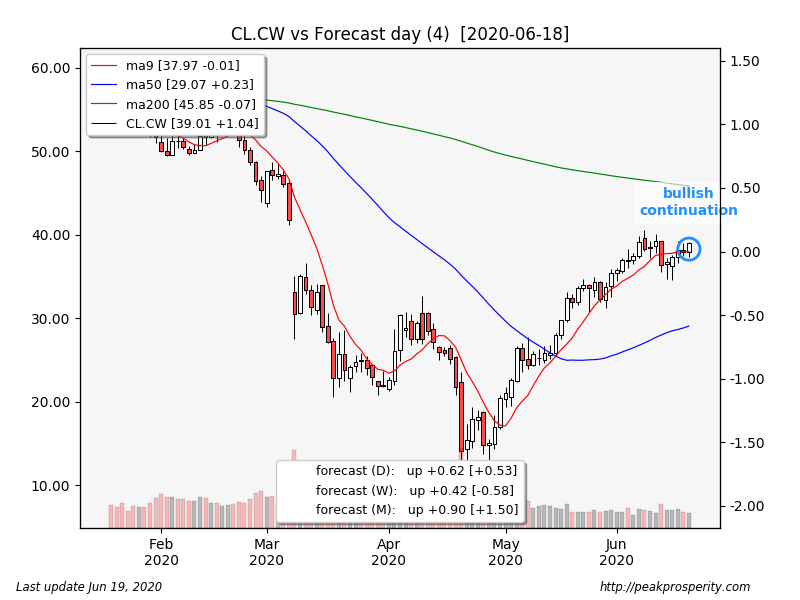 SPX inched up +1.85 [+0.06%] to 3115.34 on moderately light volume. The short white candle was a bearish continuation, forecaster was unchanged, remaining in a downtrend. SPX remains in an uptrend in the weekly and monthly timeframes.

Still no sign from SPX which direction it will be headed in the near term. Medium and long term trends continue to point higher. It remains below the 9 MA, which is a bearish sign. 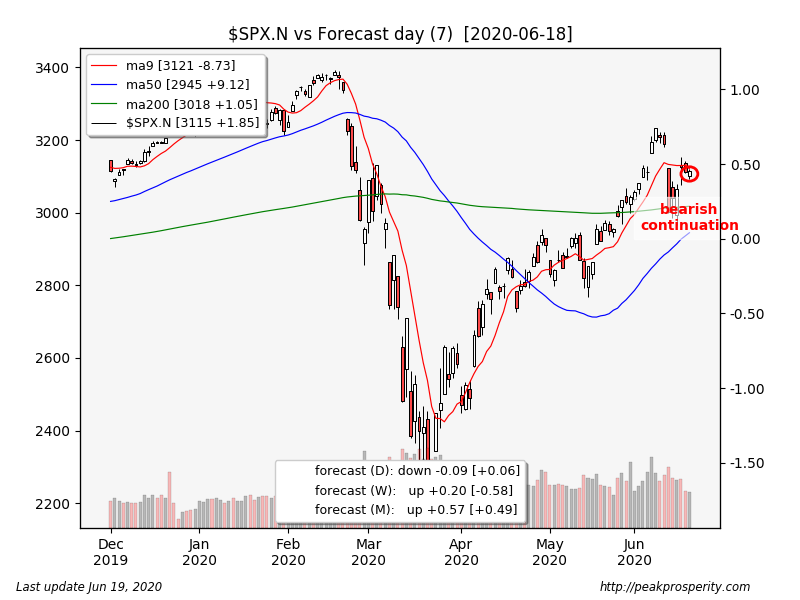 TLT rallied +1.06%. The spinning top candle was a bullish continuation, forecaster climbed, moving higher into its uptrend. TLT is in an uptrend in the daily timeframe. The 30-Year yield fell -6.0 bp to +1.46%.

TY climbed +0.12%. The confirmed bullish nr7 candle was a reasonably strong bullish reversal (47%), forecaster climbed, rising into an uptrend. TY is in a downtrend in both the weekly and monthly timeframes. The 10-Year yield fell -4.0 bp to +0.70%.

The 10-year is back above the 50 MA, which is a positive sign. It is also back in a daily uptrend. 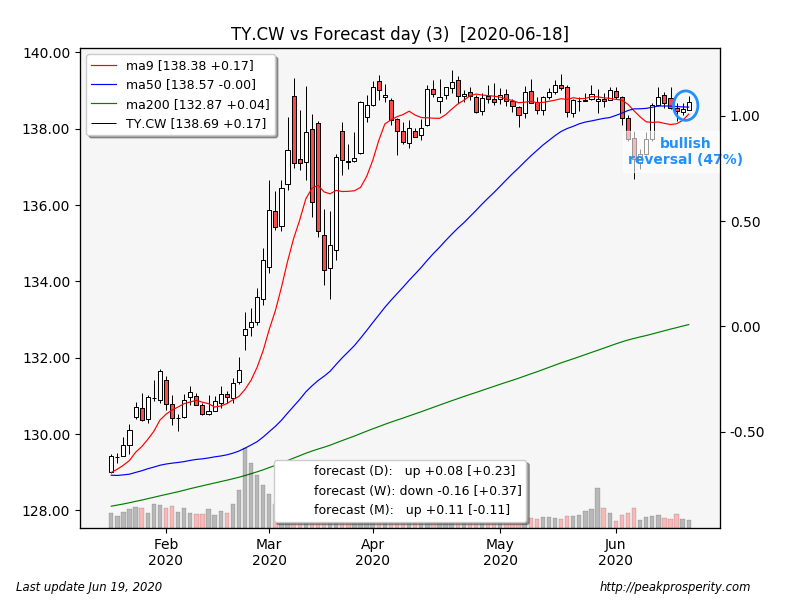 JNK dropped -0.30%. The confirmed bearish nr7 candle was neutral, and forecaster climbed, moving higher into its uptrend. JNK is in an uptrend in the daily and weekly timeframes.

Not sure why forecaster liked the drop in JNK; it has now dropped back below the 9 MA, which is a bearish sign. 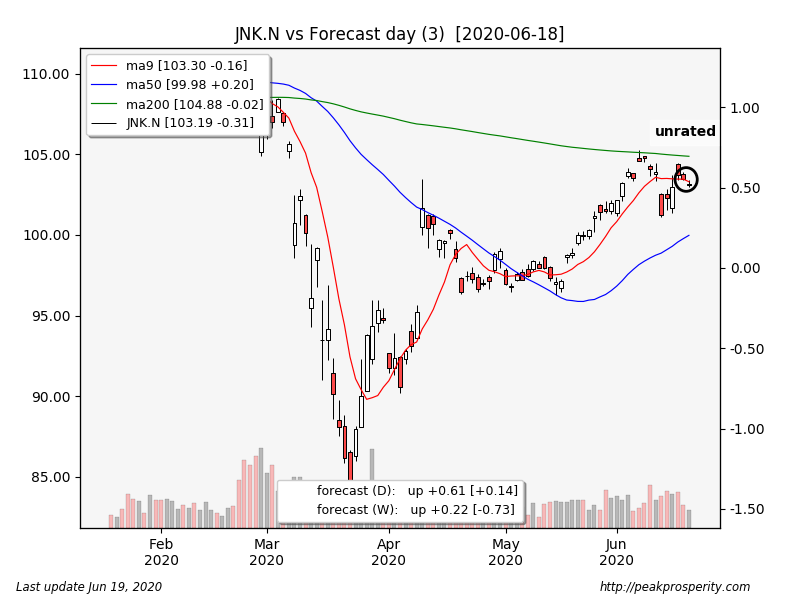 The GLD ETF tonnage on hand climbed +1.17 tons, with 1136 tons remaining in inventory.

Premiums for physical gold and silver continue to drop; physical ETFs remain in discount, while BV premiums are back t being mixed.

Gold and silver could go either way at this point, while the miner downtrend seems to be picking up speed.

Equities and crappy debt both look to be at inflection points also, with crappy debt looking a bit stronger.

Crude seems to be headed higher, and copper remains well above that 200 MA; both items look to be comfortable at or around their current levels.

So what’s the deal with the dropping Fed balance sheet?

And there is a big shift happening: The Fed has started lending to entities, including states and banks, under programs that channel funds into spending by states, municipalities, and businesses, rather than into the financial markets. These types of programs are propping up consumption – not asset prices. That’s a new thing. I don’t think the hyper-inflated markets, which have soared only because the Fed poured $3 trillion into them, are ready for this shift.

Note that this lending is backstopped by you, the taxpayer, via the US Treasury.  So if these loans go sour, you are on the hook for them.  All of them.

But his central point: he believes that the asset price prop (the SPVs) is being withdrawn.

That suggests to me that the next move for SPX (and, perhaps, crappy debt) may well be lower, not higher.

As we all know, the federal government can print unlimited amounts of money.  Not so much at the state level.  The response to coronavirus has blown a huge hole in each states budget.  And the oil states are really hosed.  How are the states going to respond to this?

Since we have an election right around the corner, I expect the spigot to be opened full blast.

According to Wolf Richter, the Fed is already lending to states, with the Treasury acting as the backstop.

“Municipal Liquidity Facility” – one of the alphabet soup of “vehicles”.  So far, just $16 billion.

Certainly Trump will want money shoved into the real economy.  Just as certainly, Team Blue will want protests, looting, and their favorite option, “a second wave” followed by more lockdowns.

Wouldn’t it be nice to have the gang in charge actually try to do the right thing?

Too much to ask for.  All they care about is power.  I suppose that’s true to Rules for Rulers: “without power, you can do…nothing.”

Of course, it will all depend on where we close.

“They” will smash it on Monday.

I don’t anticipate what “they” will do.  I take things a day at a time.  I let the market show me what’s up.  That way I don’t get scared in advance, and I also don’t get too excited in advance.