Market-moving news of the day:

The ECB met today, and announced they would be expanding the PEPP (Pandemic Emergency Purchase Program) by 600 billion Euros to 1.35 trillion.

Gold rallied for much off the day, spiking down briefly at 9:30 am in New York, but then moving generally higher for the remainder of the day. The bullish harami candle was a bearish continuation, forecaster climbed, but remains in a downtrend. Gold is in an uptrend in the monthly timeframe.

Gold/euros climbed +2.11 [+0.14%] to 1520.41 on moderate volume. The long white candle was a bearish continuation, forecaster dropped, moving deeper into its downtrend. Gold/euros is in a downtrend in both the daily and weekly timeframes.

Gold’s rally did take it back above the 50 MA, but the harami candle pattern looked weak, and forecaster wasn’t impressed either. Still, the move higher did pull the weekly back out of a downtrend, so that’s a plus. Gold/Euros made a new low today – it isn’t showing any signs of a rebound at all. 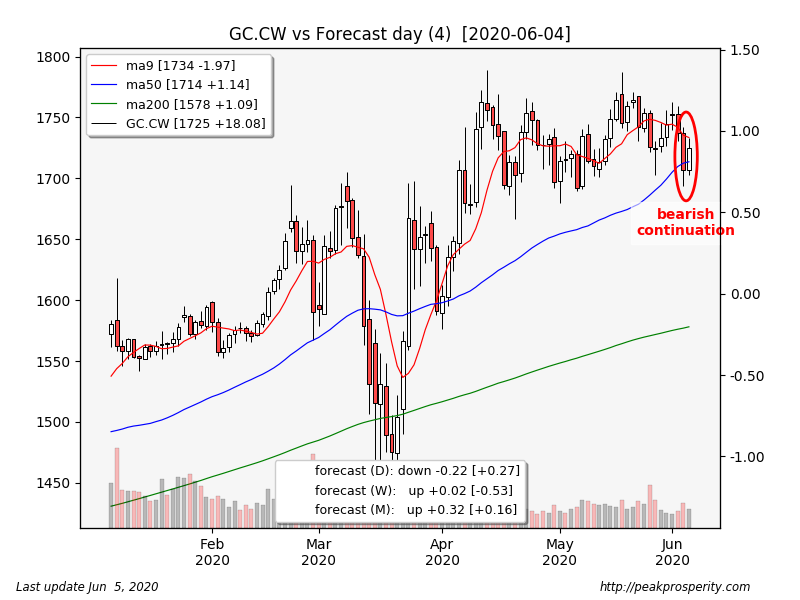 Silver dipped lower in Asia, then chopped back higher for the rest of the day in a relatively narrow range. The bullish harami candle was a bearish continuation, forecaster climbed, but remains in a downtrend. Silver is in an uptrend in the weekly and monthly timeframes. 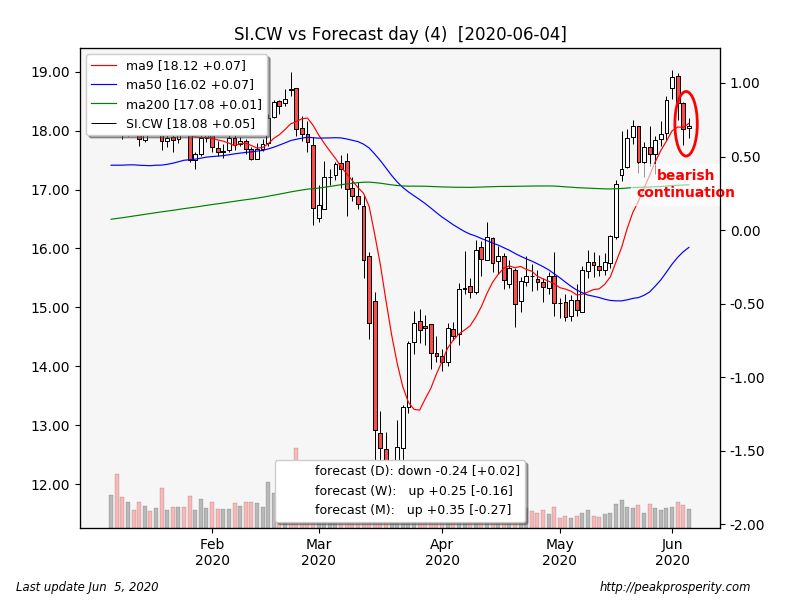 No bullish reversal for the miners today. 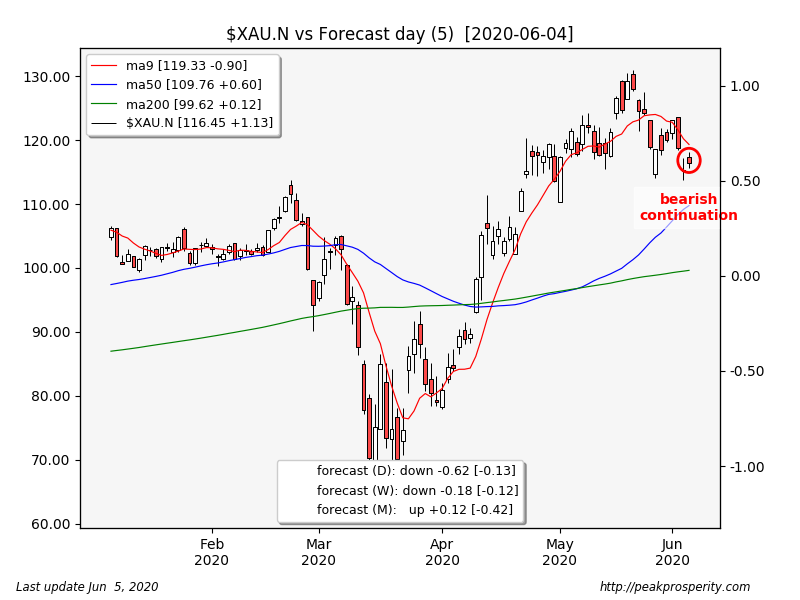 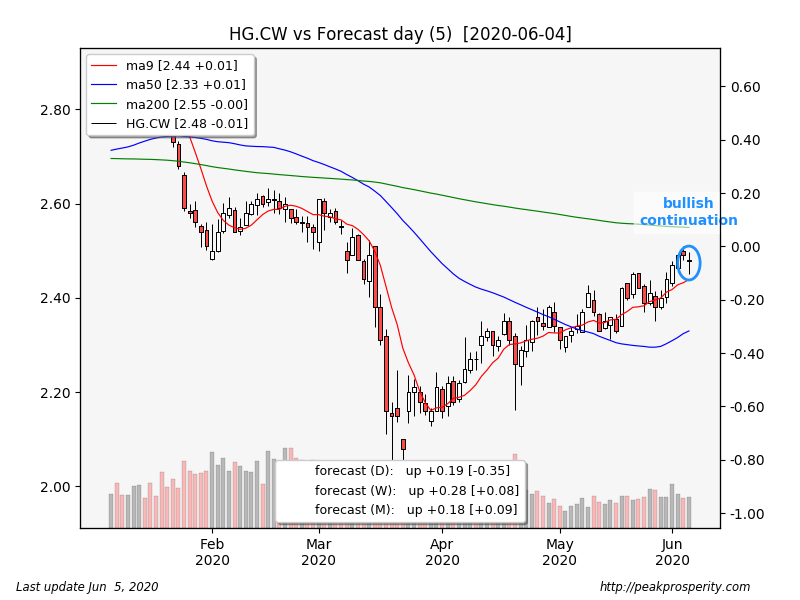 The buck plunged -0.61 [-0.63%] to 96.62 on extremely heavy volume. The long black candle was a possible bullish reversal (34%), forecaster dropped, moving deeper into its downtrend. The buck is in a downtrend in all three timeframes.

The EUR continues shooting higher. Is Europe the new safe haven? I’m not sure why the candle code liked today’s DX print; it looked pretty ugly to me. 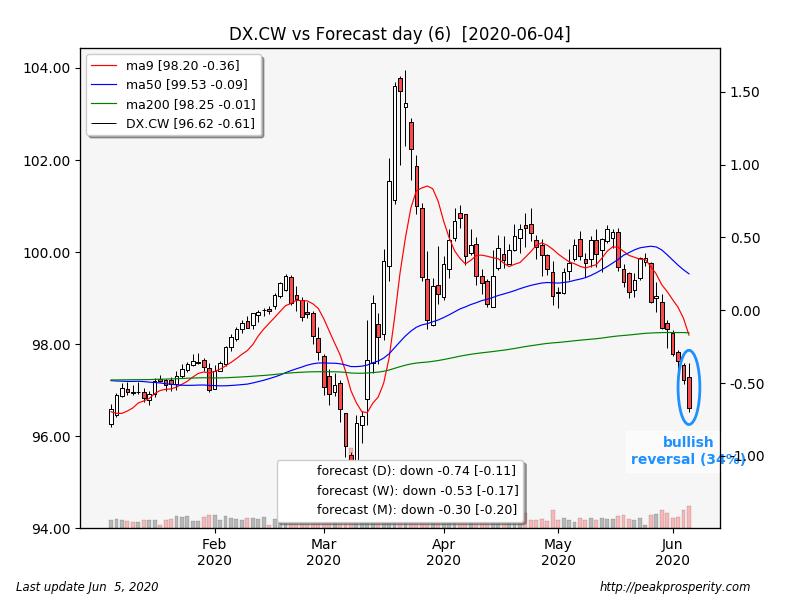 Crude rose +0.61 [+1.65%] to 37.51 on moderately light volume. The short white/NR7 candle was a bullish continuation, and forecaster climbed, moving higher into its uptrend. Crude remains in an uptrend in all three timeframes. 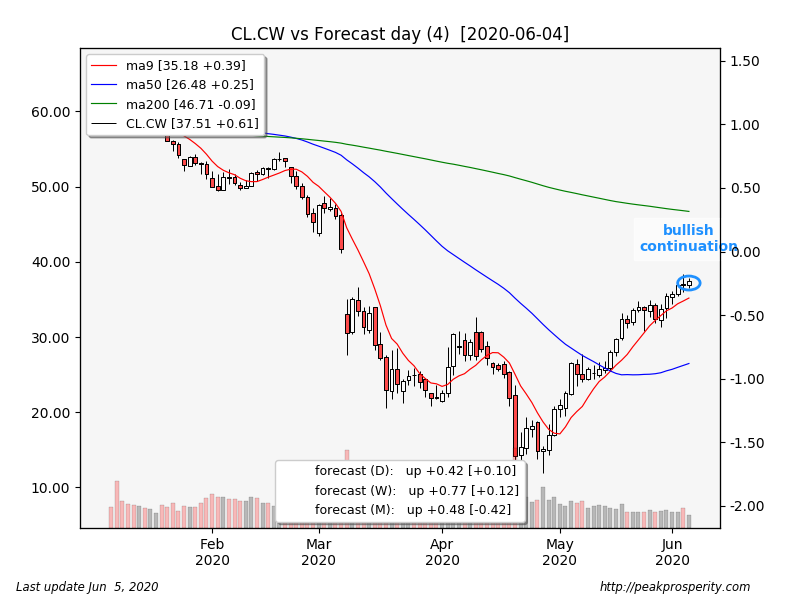 SPX dropped -10.52 [-0.34%] to 3112.35 on moderately heavy volume. The long legged doji candle was a bearish continuation, forecaster dropped, but remains in an uptrend. SPX is in an uptrend in all three timeframes.

No bearish reversal for equities. 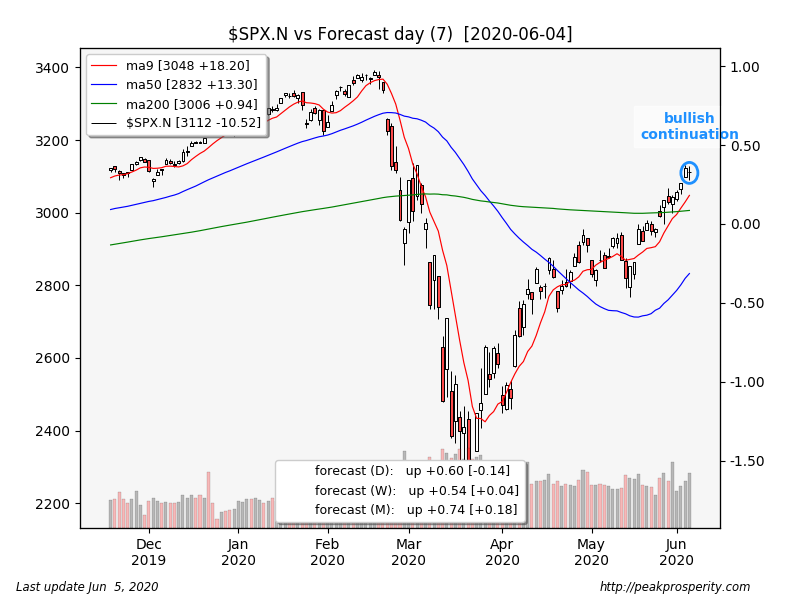 TLT fell -1.45%. The black marubozu candle was a possible bullish reversal (37%), forecaster dropped, moving deeper into its downtrend. TLT is in a downtrend in both the daily and weekly timeframes. The 30-Year yield rose +6.0 bp to +1.62%.

TY dropped -0.40%. The long black candle was a bearish continuation, forecaster dropped, moving deeper into its downtrend. TY is in a downtrend in all three timeframes. The 10-Year yield rose +5.0 bp to +0.82%.

The 10-year closed conclusively below its 50 MA. There is starting to be some serious selling in the treasury bond market. It could be tied in with the plunge in the buck. 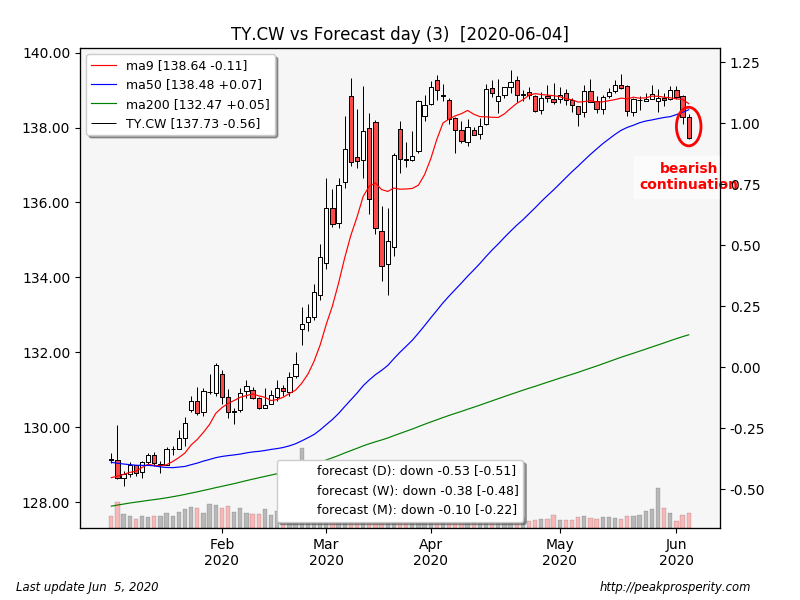 JNK dropped -0.33%. The confirmed bearish nr7 candle was a possible bearish reversal (36%), forecaster dropped, but remains in an uptrend. JNK is in an uptrend in the daily and weekly timeframes. 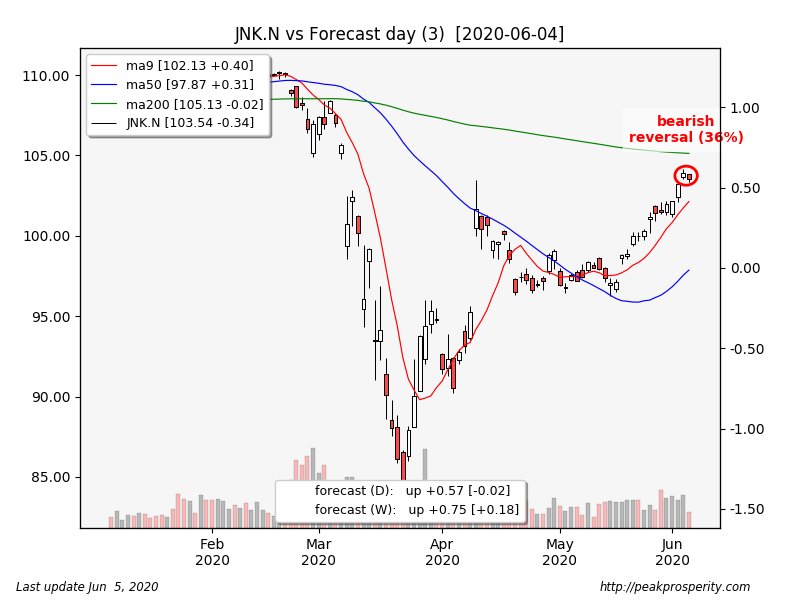 Physical ETFs remain in discount, while BV has now moved back into premium. Silver remains in shortage.

Gold rallied reasonably strongly today, while miners and silver struggled to remain in the green. No meaningful bullish reversal in PM at this time.

Risk assets started to look a little shaky today; no serious reversal yet, however.

Bonds are starting to really fall – the drop in bonds happened at roughly the same time as the drop in the dollar, which came immediately following the ECB meeting. It appears that money is fleeing the US in earnest, heading back to Europe.

The plunge in the buck/rally in the Euro started right after the ECB announcement at 7:45 am. The action by the ECB suggested that the German court ruling will have no impact on ECB policy. The ECB’s printing operation is all about supporting Italian and Spanish debt prices.

Here’s the thing. If the Bundesbank follows their supreme court (Rule of Law, much revered in theory, annoying as hell when it threatens your Project), what will the ECB do? This remains the skeleton at the feast – the question, unanswered. Lagarde certainly didn’t answer it today, mainly because it is completely out of her hands. Ultimately, the ECB is running a bluff. All the Bundesbank has to do is – nothing. As in, not buy anything.

My favorite line from the Tao: “the Master does nothing, but nothing remains undone.”

We are no longer talking about Ital-exit; what’s at stake here are the yields of the Italian and Spanish government debt, which I suspect will absolutely blow out if the Bundesbank stops buying on August 6th. Next ECB meeting: July 16th.

I’m not sure Gold is rallying.  It just seems that the USD is falling, as GOLD/AUD is down 1.5% today.

The 10-year exploding higher prior to the most bogus job numbers ever, the Dow closing in on being up 1000 points today, the ““markets”” being up every day for the past week, and gold getting decimated.  I guess all is well in the world.  Looks like we are back to the roaring 1920’s again.  🤔🤔

And, as dtrammel pointed out that Dr. Fauci is so confident in the potential effectiveness of a vaccine for a completely unique virus that there will be mass manufacturing of the said vaccine prior to whether the vaccine has been proven effective or not.  That’s so good to hear because I was a bit skeptical on getting an effective vaccine in a timely fashion given the fact there’s never been an effective  vaccine developed for the common cold or HIV despite many many $billions spent and tremendous research in those efforts for the past 40+ years.  Just when I thought the world was descending into chaos miracles are happening in front of my eyes.  That will teach me to be so skeptical.  🤔🤔

This send gold plunging, and equities shooting higher, along with crude.

… many veteran investors are throwing in the towel on what is emerging as the most furiously ridiculous rally in history in what is now better known as “Jay’s market” (with 73% of Wall Street claiming that the market is only up due to the artificial gimmick of the Fed’s balance sheet explosion and not due to fundamental factors). And with one after another investing legend such as Warren Buffett, Stanley Druckenmiller, David Tepper boycotting the artificial rally, and either selling or pulling out, today GMO’s Jeremy Grantham became the latest to bail on what Bank of America recently called a “fake market.”

In a letter to GMO investors, Grantham writes that “we have never lived in a period where the future was so uncertain” and yet “the market is 10% below its previous high in January when, superficially at least, everything seemed fine in economics and finance. And if not “fine,” well, good enough. The future paths include many that could change corporate profitability, growth, and many aspects of capitalism, society, and the global political scene.”

In short, the veteran value investor known for calling several of the biggest market turns of recent decades admits he has lost his faith in an upside case – unlike the retail daytrading army – and his sense of direction in a world of record uncertainty “which in some ways seems the highest in my experience” and as a result “in terms of risk and return – particularly of the worst possible outcomes compared to the best – the current market seems lost in one-sided optimism when prudence and patience seem much more appropriate.”

Grantham also highlights the obvious: that the market and the economy have never been more disconnected, and points out that while “the current P/E on the U.S. market is in the top 10% of its history… the U.S. economy in contrast is in its worst 10%, perhaps even the worst 1%…. This is apparently one of the most impressive mismatches in history.”