Gold suffered two high-volume spikes down in both Asia and London, finally selling off in earnest at 8:15 am and then bottoming out just after 10:30 am in New York. Gold had a modest bounce into the close The long black candle was a bearish continuation, forecaster dropped, moving deeper into its downtrend. Gold is now in a downtrend in both the daily and weekly timeframes.

Gold/euros plunged -36.99 [-2.38%] to 1518.30 on moderately heavy volume. The long black candle was a bearish continuation, forecaster dropped, moving deeper into its downtrend. Gold/euros is in a downtrend in both the daily and weekly timeframes also.

Today gold made a new low – a lower low. That’s a downtrend. Gold also closed below its 50 MA, which is a bearish sign. Gold/Euros looks even worse – gold/Euros broke down to hit a 2 month low just today. 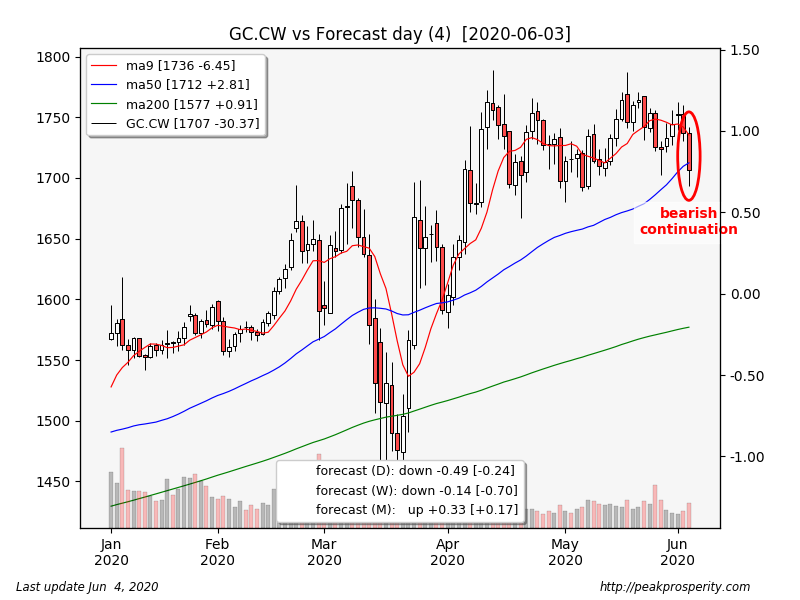 Silver also suffered from spikes lower, with the big move starting just after 8 am, with the day low at 10:40 am in New York. The opening black marubozu candle was a bearish continuation, forecaster fell, dropping into a downtrend. Silver is still in an uptrend in the weekly and monthly timeframes.

Silver closed below the 9 MA, which is bearish. Candle print: bearish. Forecaster: bearish. So far, just on the daily timeframe. 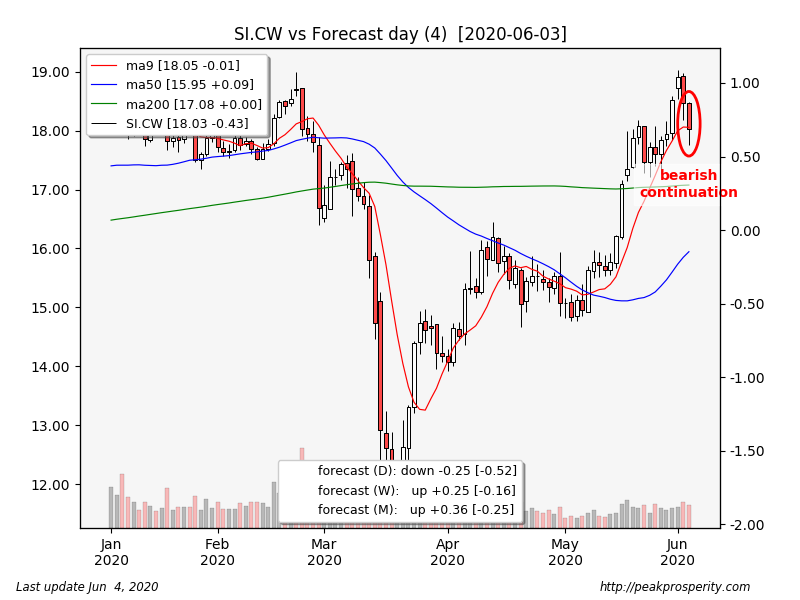 Miners gapped down at the open, then chopped sideways for the remainder of the day. GDX dropped -3.70% on moderately heavy volume, and GDXJ fell -3.35% on moderate volume. XAU moved down -2.93%, the swing high candle was a likely bearish reversal (62%), forecaster fell, dropping into a downtrend. XAU is now in a downtrend in both the daily and weekly timeframes.

Like gold, the miners made a lower low today. That’s a downtrend. The swing high print was also quite bearish. The miners may be setting up for a more substantial correction – both daily and weekly trends are starting to look a bit ugly at this point. 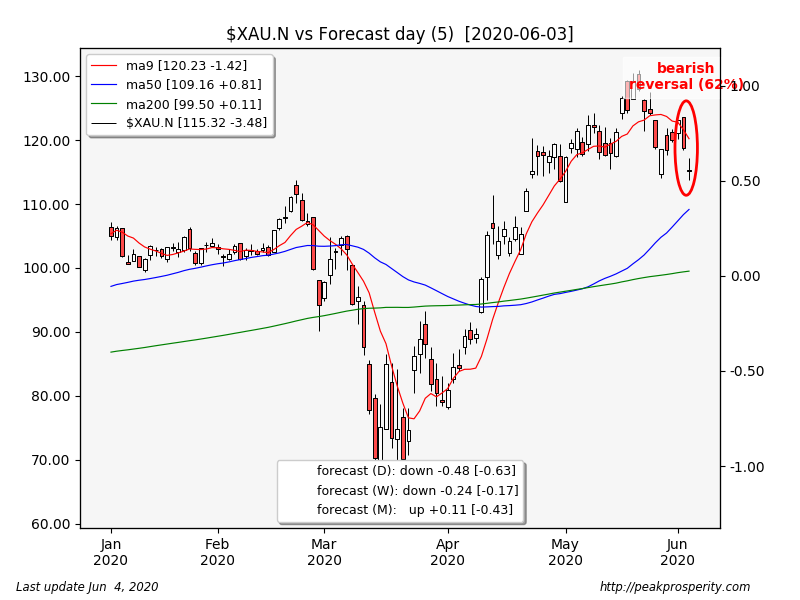 Platinum fell -12.70 [-1.48%], and palladium fell -26.42 [-1.35%]. Compared with gold and silver, both platinum and palladium hardly moved. Platinum is in a downtrend, however, and is right at the bottom of its recent trading range. It could well break lower if the PM downtrend continues.

Copper was unchanged at 2.49 on moderate volume. The short black candle was a bullish continuation, forecaster dropped, but remains in an uptrend. Copper is in an uptrend in all three timeframes.

No change for copper. It remains in an uptrend. 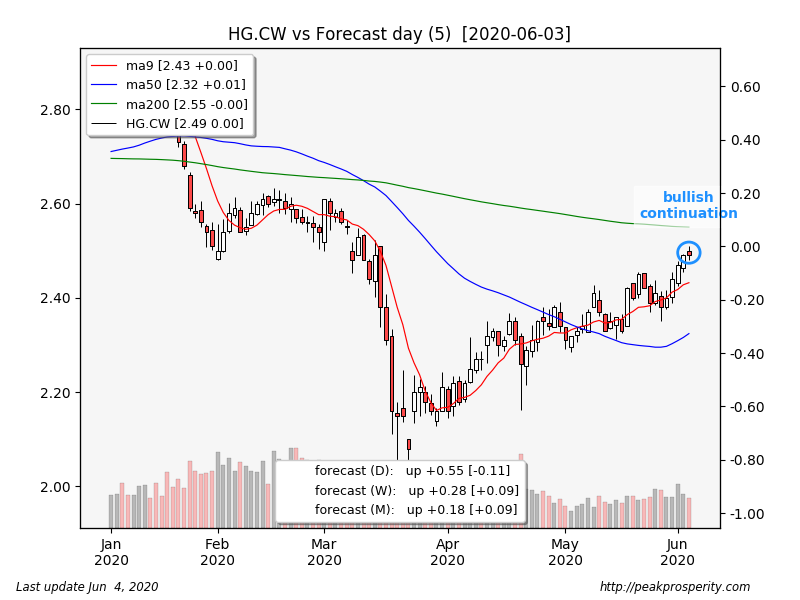 The buck dropped -0.40 [-0.41%] to 97.23 on very heavy volume. The opening black marubozu candle was a bearish continuation, forecaster climbed, but remains in a downtrend. The buck is in a downtrend in all three timeframes.

The buck continues to head south – the downtrend is starting to become more pronounced. Notice: the relatively rapid decline in the buck hasn’t helped gold at all. 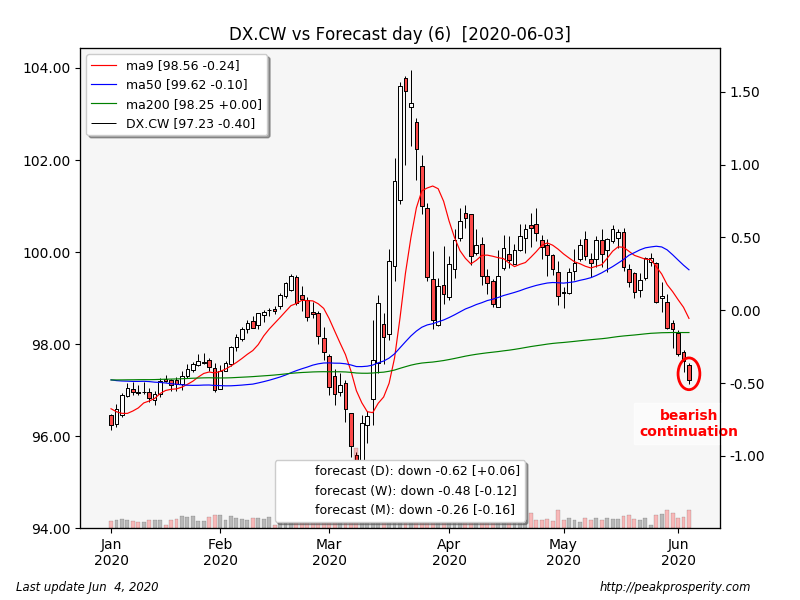 Crude moved down -0.08 [-0.22%] to 36.90 on moderate volume. The doji candle was a possible bearish reversal (38%), forecaster dropped, but remains in an uptrend. Crude is in an uptrend in all three timeframes.

This was a fairly bearish candle print for crude; doji candles are usually pretty weak, but this one had a high bearish rating. Might crude be getting tired after its 6 week climb? According to the forecasters, crude remains in a strong uptrend. 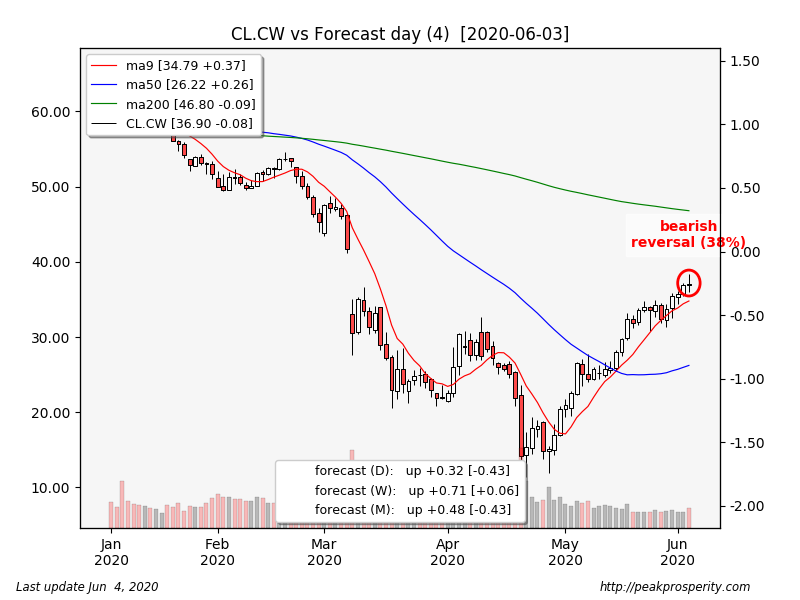 SPX rallied +42.05 [+1.36%] to 3122.87 on moderate volume. The opening white marubozu candle was a bullish continuation, forecaster climbed, moving higher into its uptrend. SPX is in an uptrend in all three timeframes.

Uptrend for SPX is now very strong. RSI-7 is 82, which is getting to be overbought. NYSE advance ratio was 80% today, which says most issues participated in this rally. That’s bullish. 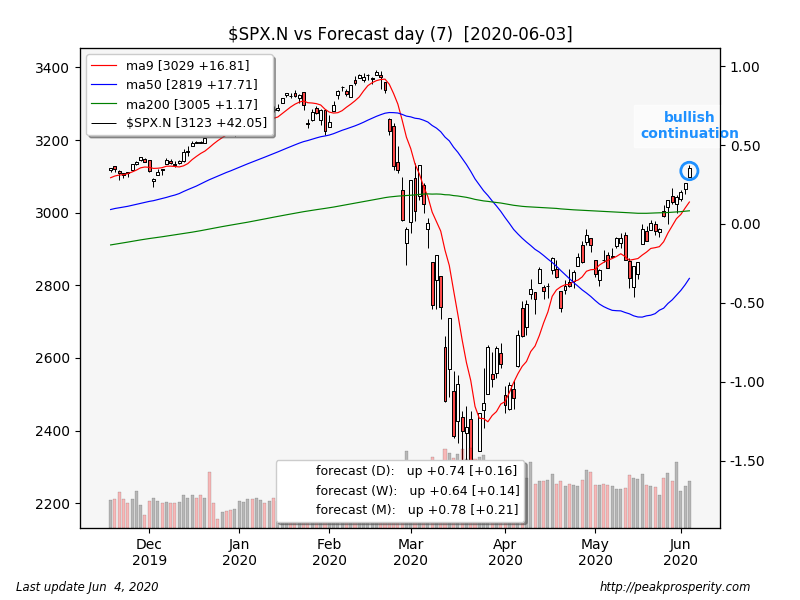 TLT fell -1.33%. The long black candle was a bearish continuation, forecaster dropped, moving deeper into its downtrend. TLT is in a downtrend in both the daily and weekly timeframes. The 30-Year yield rose +8.0 bp to +1.56%.

TY dropped -0.38%. The opening black marubozu candle was a bearish continuation, forecaster dropped, dropping into a downtrend. TY is in a downtrend in all three timeframes. The 10-Year yield rose +8.0 bp to +0.76%.

The 10-year appears to be breaking down – this is the first close below the 50 MA since early January. 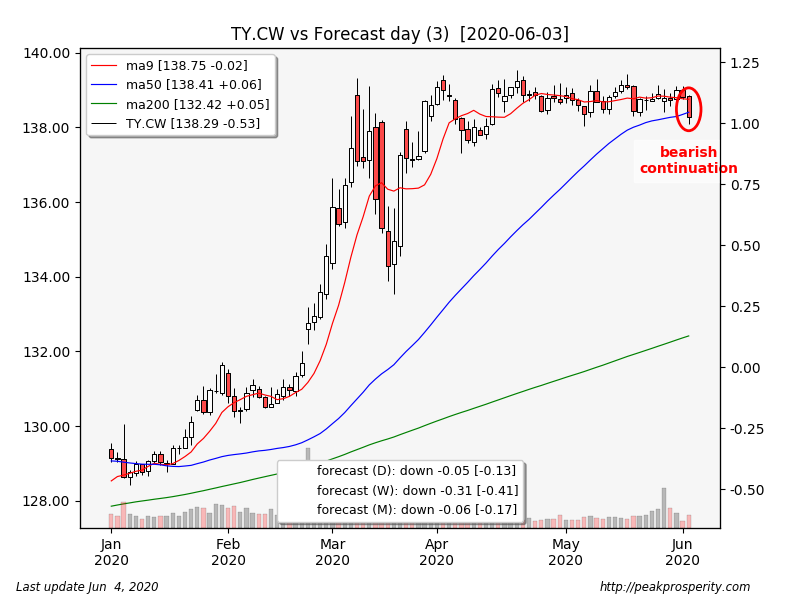 JNK climbed +0.64%. The spinning top candle was a bullish continuation, forecaster climbed, moving higher into its uptrend. JNK is in an uptrend in the daily and weekly timeframes.

This marks a new 3-month high for crappy debt. Uptrend is now quite strong. 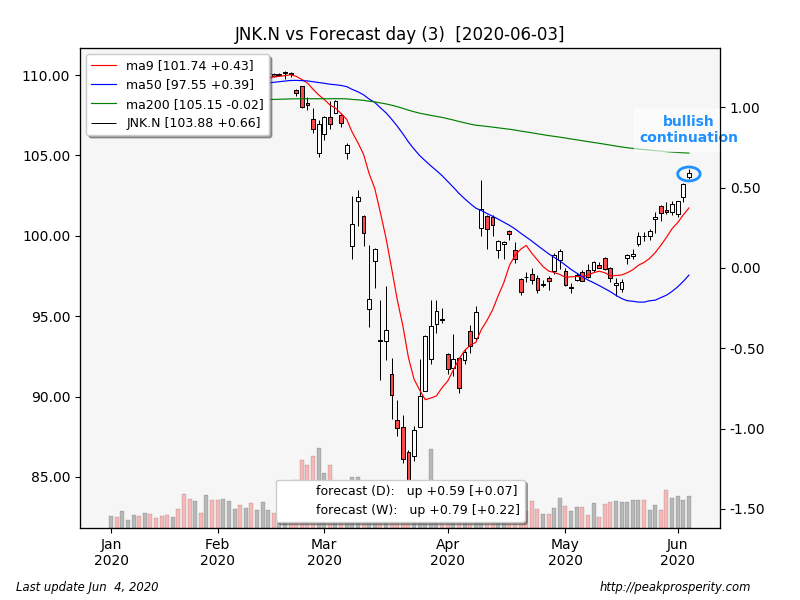 The physical ETFs have now moved into discount. Shortages remain in silver, although the premiums are dropping as price falls.

ISM Non-MFG Index: Headline 45.4 (prior 41.8); services are declining at a slower rate – but it is still recessio
nary.

Gold, silver and the miners broke down more emphatically today, with both gold and the miners making lower lows, which is the mark of a downtrend. Silver, still doing best of the bunch, ended the day below its 9 MA too.

Risk assets continued to move up – both equities and crappy debt made new highs.

Copper and crude didn’t participate; both were mostly flat today.

The buck has fallen for 6 of the last 7 days; is it the “mostly peaceful” protests? Or just money returning to Europe from its temporary home in the US? Europe did get hit with the virus first, so – presumably – it should recover first too. And it appears to be doing so with a bit more harmony than in the US.

The US multi-city outdoor SC2 infection trial is still proceeding apace, although it appears as though fewer looters are participating at this stage. Perhaps the discovery of the pre-positioned pallets of bricks dampened their enthusiasm. I want to thank all the participants in this trial for their courage in placing themselves in harm’s way so that science can advance.

Euro Recovery Fund: enough money to send 1000 euros to every person in Europe, although, do you think that’s what will actually happen? Why give money to people when you can hand it to governments and attach strings to it? The spending will be borrowed from the debt markets, and allegedly repaid out of the EU’s general budget over the next 7 years. Problem: EU’s GDP is projected to drop 8-12% this year as a result of the pandemic response, and the 500B euros is less than 3% of GDP.

The impact from the upcoming recession (and the probable debt defaults that will be caused by it) are still ahead of us, although the timing of how that actually plays out is anyone’s guess.

ECB meets tomorrow. How much will they print? Right now, the number is 750 billion for the “PEPP”. They are expected to bump that to $1-1.25 trillion. What happens when DE stops participating? It won’t end the Eurozone, but – it might stop the printing.

That’s less about an Italy/Spain exit, and more about bond prices of the periphery.

This restriction will start to matter even more when the defaults start to hit from the upcoming GDP drop. When this happens, the ECB will want to print money and buy crappy debt from the flock of zombie companies kept alive since the GFC, and the Bundesbank won’t be allowed to follow along. The outcome from that should be interesting too.

Aussie Update:  Hows this for a mirror image of AUD/USD vs AUD/Gold.  This is always an issue to keep in mind in Gold holdings for those that do not live in the US.  As gold is priced in USD you have to consider both the price of Gold and the US exchange rate.  Normally for AU, Gold and the AUD tend to track together as we are a major exporter.  But it seems the AUD is up on the strong price of Iron Ore (with Brasil struggling) and with soft USD Gold price we now see Gold in AUD down almost 10% in one week.

Yeah I produce regular charts for gold/EUR, and that’s looking pretty unhappy.  Gold/AUD must be even more dreadful. 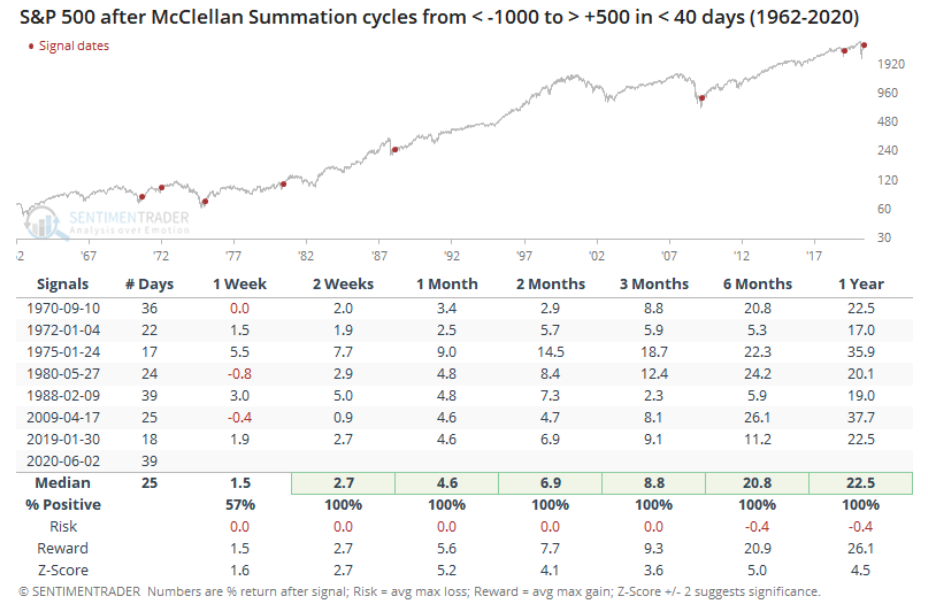 It doesn’t look good for us lone-wolf deflationists, lol.

My dollar play has fizzled. My gold and silver miner plays look dead in the water. The only green left in my portfolio is uranium, XLK call options, VIX put options, and bitcoin.

I think this summer I will park my cash in bitcoin and become the dreaded buy-and-hold investor again. So boring.

Captain Sheeple has gone down with the ship.

Then again, perhaps we are just used to things happening in double-quick “pandemic time”.

We’re only looking at “30 days late” right now.  Defaults take time to percolate.  And the banksters may well extend & pretend too.

Regardless, we should start seeing some more companies go BK besides Hertz.  No idea when the trickle becomes a flood though.  Options: probably not the best vehicle given we don’t know what the timing will be.

I mean, theoretically, 90 days, but – I did mention extend and pretend right?

I’m still in the “Long Grind” mind set (but it certainly does not feel like it at present!!).  The reason for this is Unemployment.  This tends to rise sharply but unfortunately, improve slowly.  The US will “officially” be around 20% for May when announced tomorrow and June could be higher.  Even with the “opening up” I don’t think it will drop back to the pre-covid levels of 5% for a long time (especially as we know there will also be the headwinds on business failures) + you would expect this to also feed on itself in feedback loop.

I know the market mantra is that they are “looking through” this 100 year high unemployment? … but really 20% + who knows how long it will take to get back to 5%??