Gold chopped sideways in Asia and London, but then gold dropped hard after the US market opened, finally ending the day near the lows. The swing high candle was a likely bearish reversal (62%), forecaster dropped, moving deeper into its downtrend. Gold is in an uptrend in the weekly and monthly timeframes.

Gold/euros fell -19.80 [-1.26%] to 1555.29 on moderately light volume. The confirmed bearish doji candle was a likely bearish reversal (62%), forecaster dropped, dropping into a downtrend. Gold/euros is in a downtrend in both the daily and weekly timeframes.

Gold’s plunge today took it cleanly below the 9 MA; for gold/Euros, gold fell below the 50 MA for the first time since late March. The candle prints are ugly; it is all pretty clearly bearish. Gold/Euros looks especially weak.

That said – we continue to see short-covering in gold; OI has been dropping steadily for the past 8 days, and is now back down to levels last seen in early April, after the deleveraging following the pandemic crash was finally at an end. This sort of action usually happens at the lows – but gold is not down off the lows much at all. I think – for the longer term – this is a positive sign. 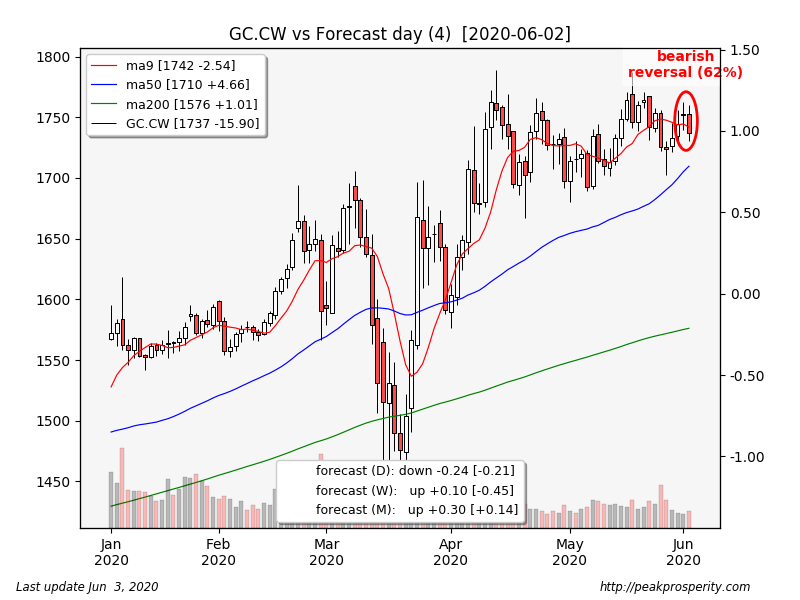 Silver chopped sideways in Asia, spiked lower at 8:30 am, and then started falling in earnest after 9:30 am, with the day lows happening at 12:30. There was a reasonably strong bounce into the close. The swing high candle was a likely bearish reversal (62%), forecaster dropped, but remains in an uptrend. Silver is in an uptrend in all three timeframes.

Silver definitely dropped harder than gold today, but it also had a more enthusiastic recovery into the close. The bounce wasn’t enough to prevent a strongly bearish swing high candle print, but in spite of the bearish print, silver remains above all 3 moving averages, and forecaster still sees silver in an uptrend. Silver did something similar two weeks ago, after which it ended up making new highs. We could see the same thing happen again. 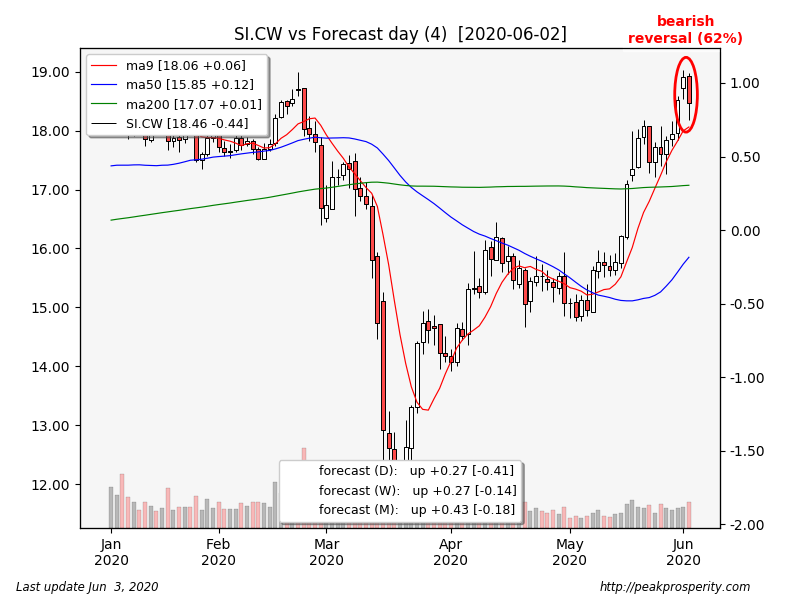 The miners gapped up at the open, but then sold off hard for the next 3 hours, eventually ending the day near the lows. GDX plunged -3.65% on moderately heavy volume, and GDXJ dropped -3.97% on moderately heavy volume also. XAU fell -3.49%, the bearish belt hold candle was a reasonably strong bearish reversal (48%), forecaster dropped, but remains in an uptrend. XAU is in an uptrend in the daily and monthly timeframes.

The miners may be in the process of forming a lower high – they haven’t done so yet, but that’s what the developing pattern is. The miners closed at the low too. This looks bearish. 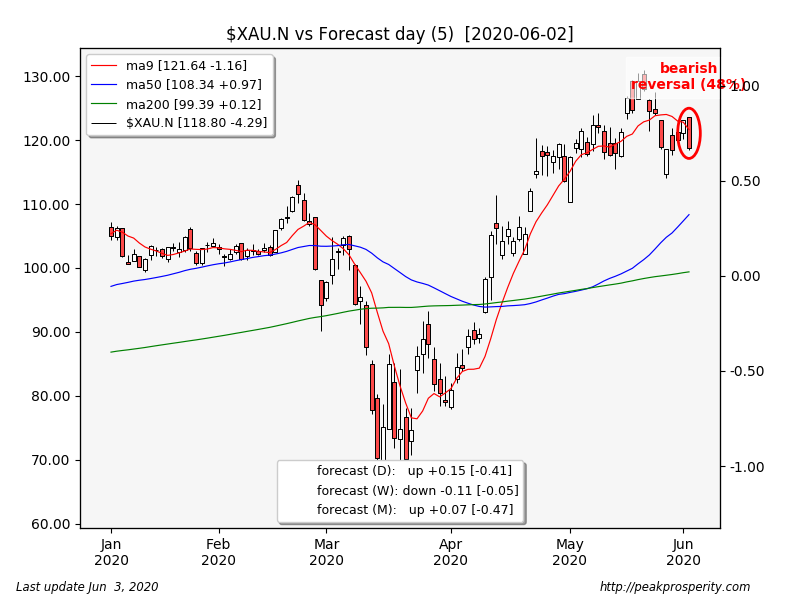 Platinum fell -28.88 [-3.31%], and palladium dropped -1.23 [-0.06%]. Platinum did something interesting today; it spiked lower at 3:30 am – well before the drop in either gold or silver – and then dropped hard starting roughly at 9:25. It really did look as though platinum was some sort of early warning system for PM. Platinum’s bearish engulfing was a possible bearish reversal (39%) and forecaster dropped into a slight downtrend.

Copper climbed +0.02 [+0.81%] to 2.49 on moderately heavy volume. The long white candle was a bullish continuation, forecaster climbed, moving higher into its uptrend. Copper is in an uptrend in all three timeframes.

Today was another new 3-month high for copper. From what I read, this is a combination of a China industrial restart, and concerns over mine supply issues as SC2 hits South America. The following article suggests that so far at least, disruptions to copper mine supply are more hypothetical rather than real. Copper remains in a moderately strong uptrend. 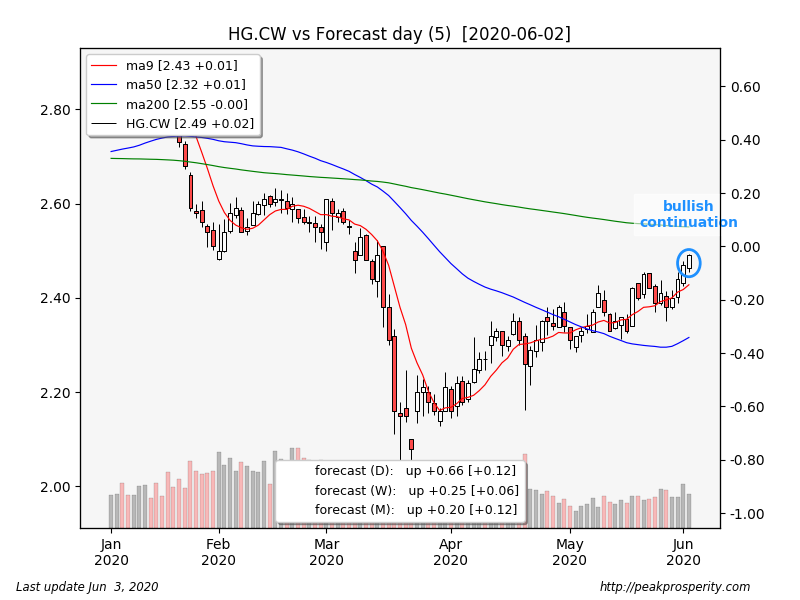 AUD is just going nuts right now – it has shot back to January 2020 levels. The overall currency flow pattern right now is risk-on: AUD and CAD [which both did quite well] are both risk on currencies. JPY, which dropped below both the 50 and 200 MA today, is a safe haven. USD shows no signs of a bullish reversal at all, although it did manage to avoid closing at the lows today. 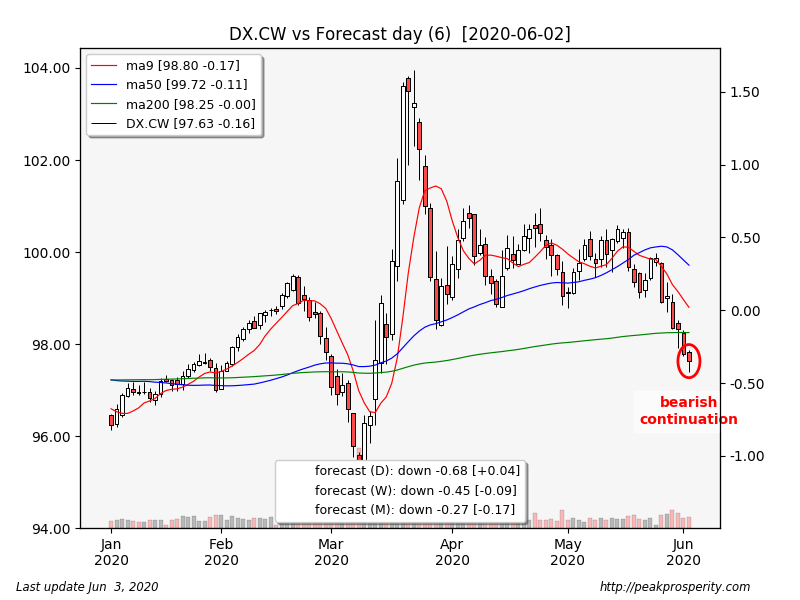 Crude climbed +1.25 [+3.50%] to 36.98 on moderately light volume. The short white candle was a bullish continuation, forecaster climbed, moving higher into its uptrend. Crude is in an uptrend in all three timeframes.

Crude continues to move relentlessly higher. Of course, it is still below profitable levels for most shale producers, but it does continue to steadily recover. Next level: round number 40, which is not far away. 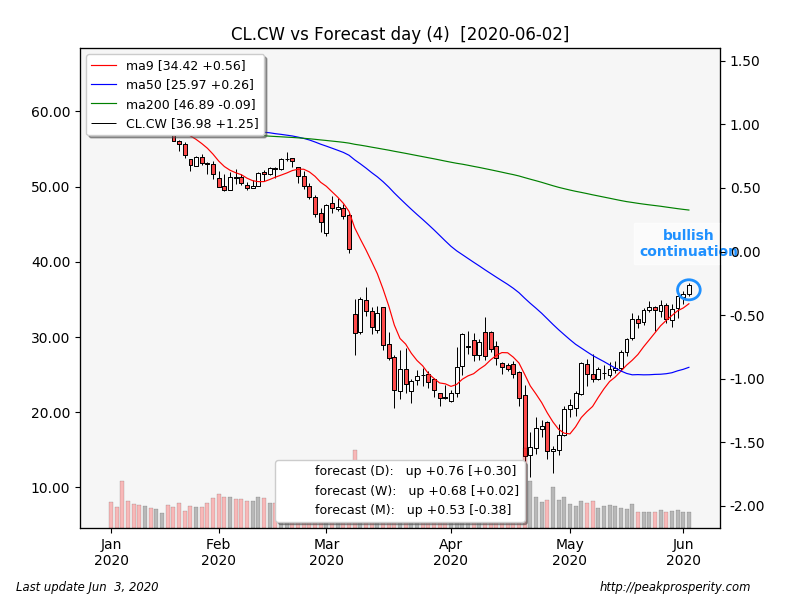 SPX climbed +25.09 [+0.82%] to 3080.82 on moderate volume. The short white candle was a bullish continuation, forecaster climbed, moving higher into its uptrend. SPX is in an uptrend in all three timeframes.

This sort of move in SPX is why I let my code do the analysis. I am personally not bullish, but my code doesn’t care about my opinions or feelings. It just reports what it sees. SPX remains in an uptrend, which is strengthening by the day. The NYSE advance ratio remains above 70%, which tells us that most issues are participating in the move higher. 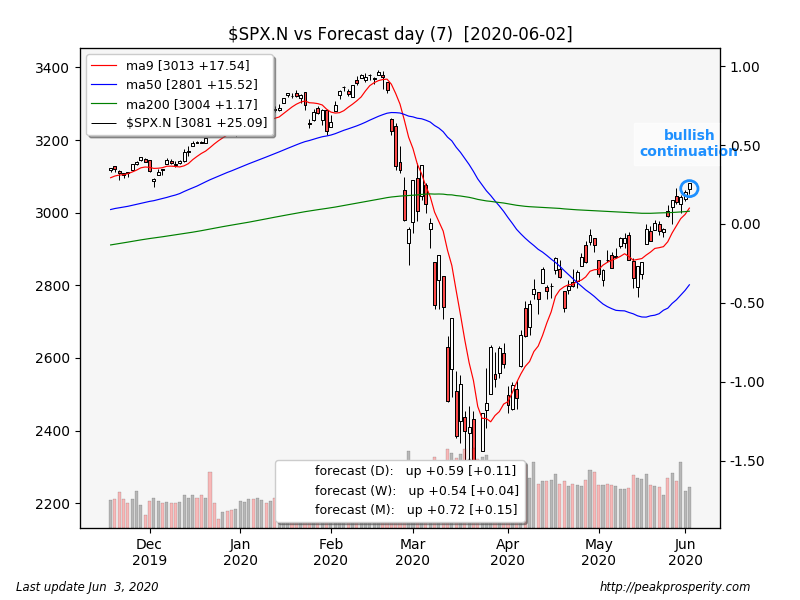 TY dropped -0.14%. The bearish harami candle was a bullish continuation, forecaster dropped, but remains in an uptrend. TY is in an uptrend in the daily timeframe. The 10-Year yield rose +3.0 bp to +0.69%.

Story remains unchanged in bonds; the 10-year is chopping sideways, while the 30-year continues to fall. Slowly. 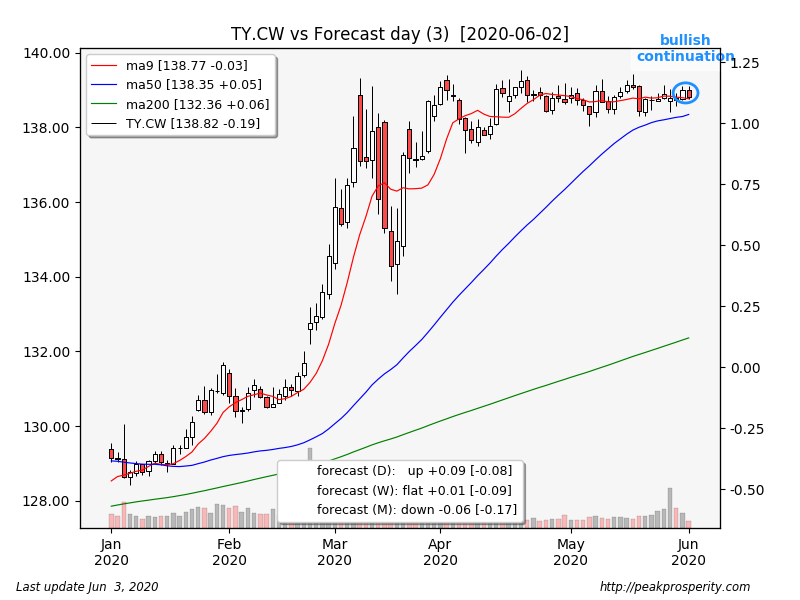 JNK climbed +1.02%. The long white candle was a bullish continuation, forecaster dropped, but remains in an uptrend. JNK is in an uptrend in the daily and weekly timeframes.

This is a new 3-month closing high for crappy debt. If anything I’m personally more bearish on crappy debt than equities, which is why my code is such a comfort. JNK continues to be in a strong uptrend. I mean, defaults have to be coming, right? It doesn’t seem to matter to the price of JNK at all. 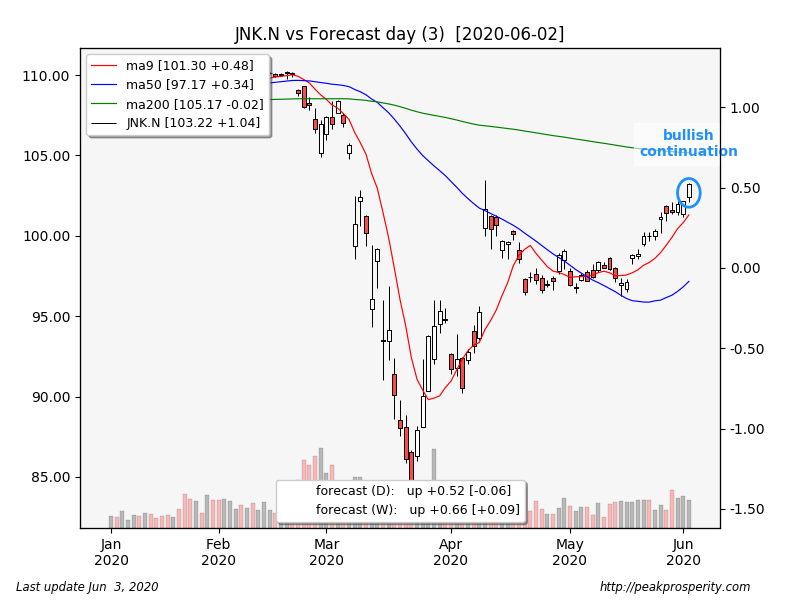 It looks as though there is some selling pressure in the physical ETFS – both are in discount. Slight premium for gold at BV. Shortages remain in physical silver.

It was another risk on day today; crude did well, so did copper, SPX and crappy debt. Likewise, risk-on currencies such as CAD and AUD moved higher, while the safe haven JPY fell. Euro made a new 3-month high today. All of this combined to keep the buck moving lower.

Gold, the miners, and now silver too are all facing some headwinds; bearish reversals have appeared in gold, possibly the miners, and platinum, with silver the sole holdout.

While we await the results of the national outdoor SC2 infection trial (code named PROTEST – still recruiting), the impending default situation in the US is worth looking at. Wolf Richter has done the breakdown for us.

Executive summary: it is all about rent payment rates.

Currently, almost all families pay their rent, companies a bit less so, and retail – it is all over the map. One retail CMBS has already “elected not to pay” an $11 million payment on its 5.25% unsecured notes. (Hope you aren’t long this crappy debt issue).

The increase in delinquencies this month represent “largest monthly jump ever”, but this was not a surprise – it actually came in a bit lower than expected. Will things improve as the economy reopens? That is the question.

Fun side note: you may recall that our President has a hotel – or two. No stress there.