Gold rallied in Asia and London, fell after the open in New York, but then rallied into the close. The spinning top candle was a possible bearish reversal (32%), and forecaster climbed, but remains in a downtrend. Gold is in an uptrend in the weekly and monthly timeframes.

Gold/euros dropped -5.14 [-0.33%] to 1563.78 on moderate volume. The spinning top candle was a possible bearish reversal (35%), forecaster dropped, moving deeper into its downtrend. Gold/euros is in an uptrend in the weekly and monthly timeframes.

Gold did rebound, but given the plunge in the buck, the move was just a currency effect. The swing low pattern was quite weak. God/Euros continues to drop. Our friends from across the pond aren’t so focused on gold right now, given the good news about the corona virus grants for Southern Europe. 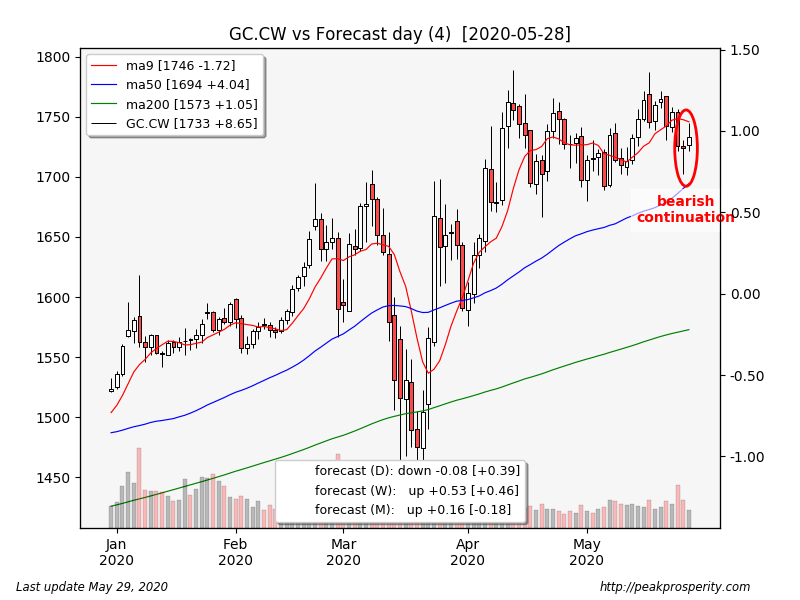 Silver chopped higher for most of the day. The spinning top candle was a bullish continuation, but forecaster fell, moving deeper into its downtrend. Silver remains in an uptrend in the weekly and monthly timeframes.

There were a large number of new shorts for silver today. The previous high was 18.18; today’s day high: 18.11. Silver is moving closer to a breakout. it remains above all 3 moving averages, and the gold/silver ratio continues to drop. 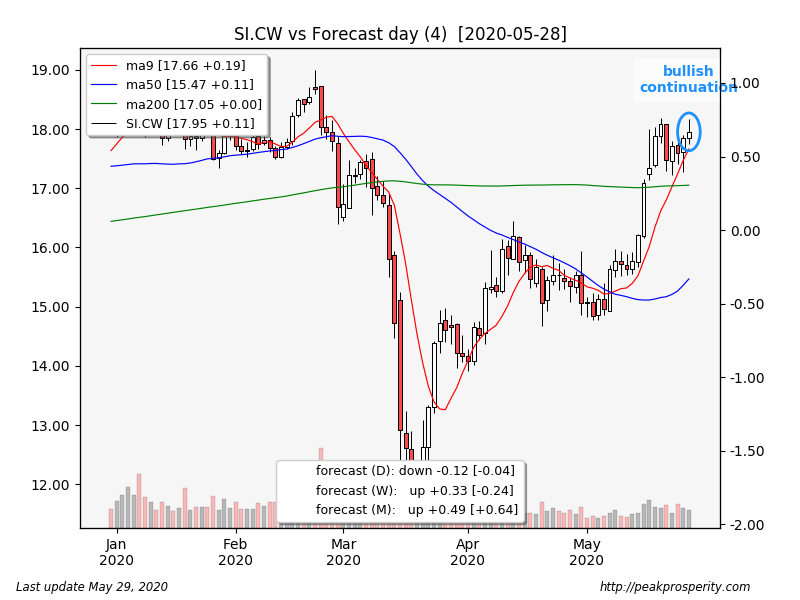 Miners gapped higher at the open, but then sold off for most of the day. GDX rose +0.86% on moderate volume, and GDXJ inched up +0.07% on moderately light volume. XAU fell -0.16%, the long black candle was a bullish continuation, forecaster climbed, but remains in a downtrend. XAU is in a downtrend in both the daily and weekly timeframes. 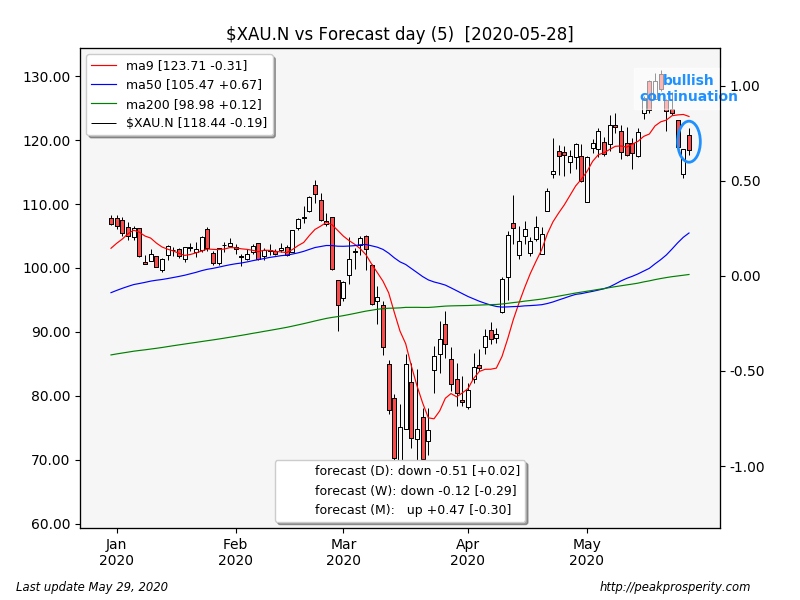 Copper climbed +0.02 [+0.84%] to 2.40 on moderate volume. The long white candle was a low-percentage bearish reversal (29%), forecaster climbed, but remains in a downtrend. Copper is in an uptrend in the weekly and monthly timeframes.

Copper’s trend remains weak; it ended the day right at the 9 MA. 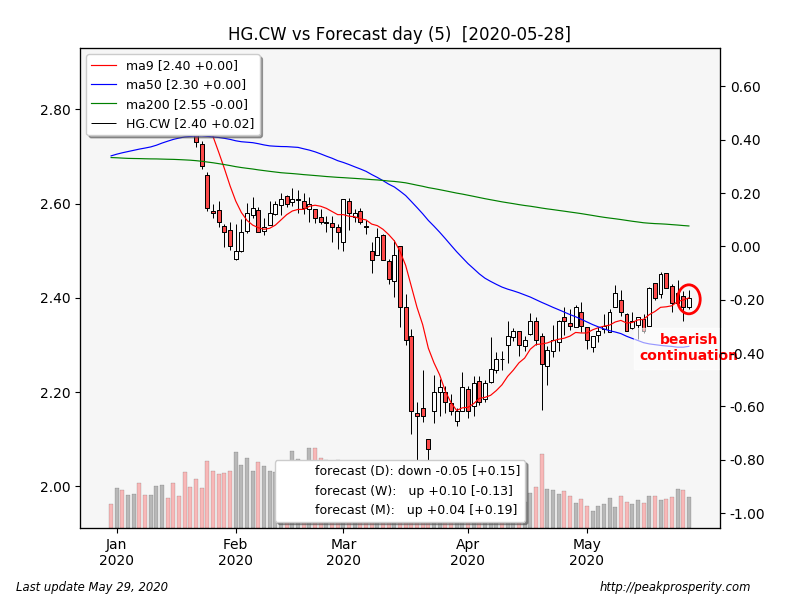 The buck plunged -0.68 [-0.69%] to 98.36 on extremely heavy volume. The long black candle was a bearish continuation, forecaster dropped, moving deeper into its downtrend. The buck is in a downtrend in all three timeframes.

This was a new multi-month low for the buck – a break below support and everything. Today’s plunge stopped just above the 200 MA. For its part, the EUR closed above the 200 for the first time since March. This is more evidence of happy news for our friends across the pond: no eurozone breakup in the near future. 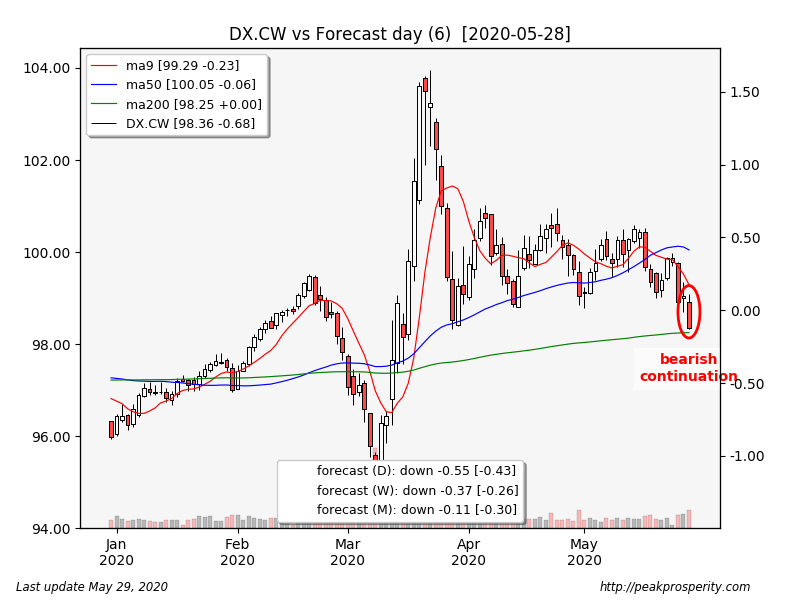 Crude shot up +1.41 [+4.36%] to 33.78 on moderately light volume. The long white candle was a bearish continuation, forecaster climbed, rising back into an uptrend. Crude is back in an uptrend in all three timeframes.

EIA report was bearish: crude +7.9m, gasoline -0.7m, distillates +5.5m. The report did not seem to bother the crude oil market in the slightest.

Crude is now back above the 9 MA, although the candle pattern today did not signal a bullish reversal. 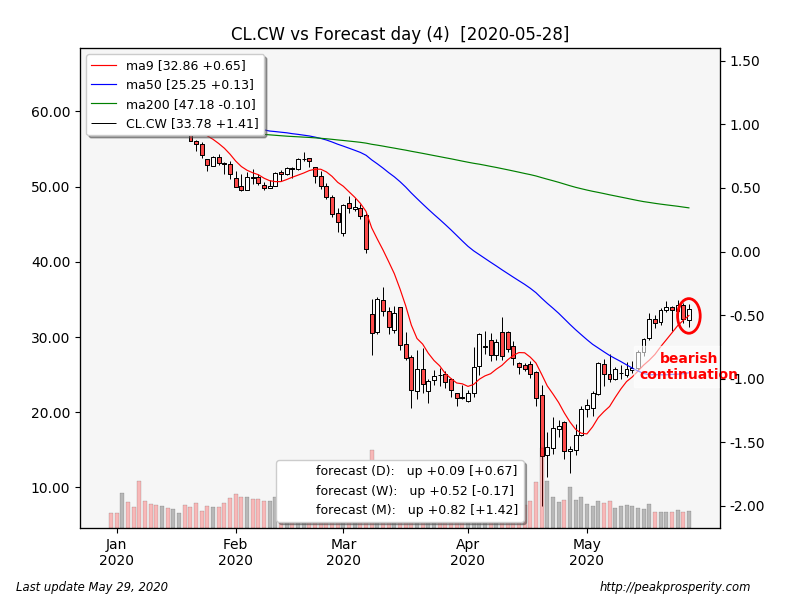 Spinning tops aren’t usually very strong candle patterns; this one had a high bearish rating. No reversal yet for SPX; it needs a confirmation tomorrow, which would be a swing high if it happened. The sector map looked pretty unhappy. I agree with the candle rating – this is a possible reversal for SPX. 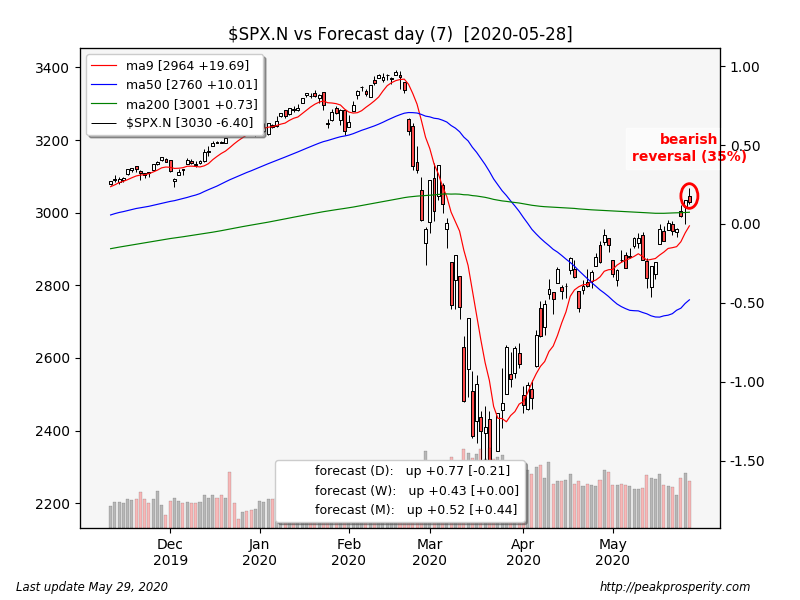 TLT dropped -0.37%. The short white candle was a bearish continuation, forecaster dropped, moving deeper into its downtrend. TLT is in an uptrend in the weekly timeframe. The 30-Year yield rose +3.0 bp to +1.47%.

TY inched down -0.04%. The short black candle was unrated, forecaster climbed, but remains in a downtrend. TY is in a downtrend in both the daily and weekly timeframes. The 10-Year yield rose +3.0 bp to +0.71%.

The 10 year continues to chop sideways in a narrow range, while the 30 year declines. This was a new 2-month low for TLT. 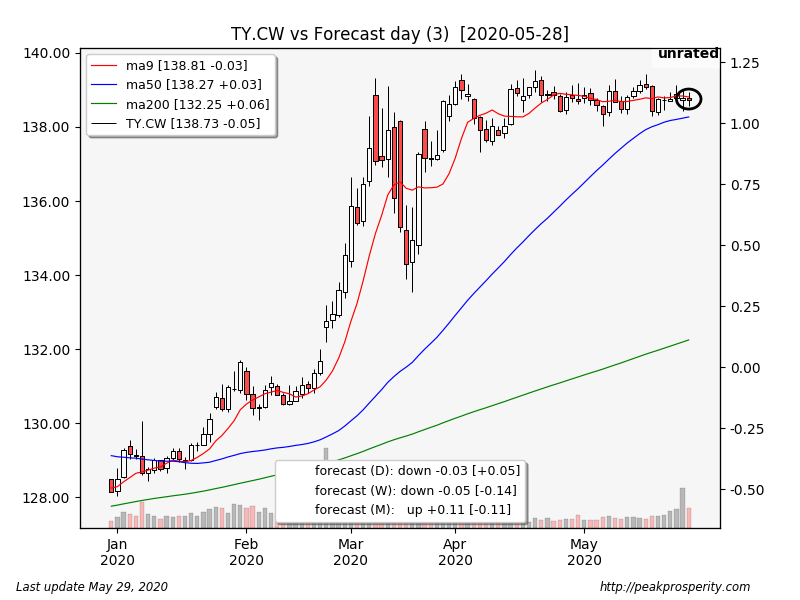 JNK moved up +0.06%. The long black candle was a low-percentage bearish reversal (28%), forecaster climbed, moving higher into its uptrend. JNK is in an uptrend in the daily and weekly timeframes.

Probably – no bearish reversal for JNK. 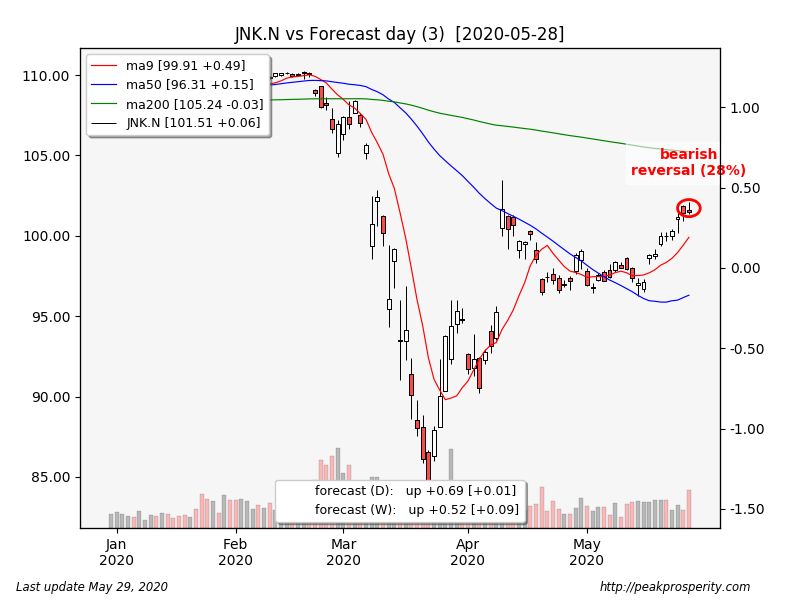 The GLD ETF tonnage on hand climbed +4.39 tons, with 1117 tons remaining in inventory.

Physical ETFs have moved back into discount, while BV is now back in premium. Premiums are also increasing on bars as well. Shortages remain in physical silver.

Gold and silver moved higher, but the miners – although they gapped up at the open, were then hit with a fair amount of selling pressure. No bullish reversal yet for gold and the miners; silver still looks strong.

The dollar sold off hard, dropping below support; it seems as though money continues to head back to Europe after the corona virus bonds.

Equities were strong initially, but reversed after hearing Trump talk about a press conference regarding China and Hong Kong tomorrow.

After 4 years of inaction, Congress has finally decided that a million Uighurs in concentration camps is deserving of notice. The house passed the Uighur Human Rights Act by 413-1, and the Senate by unanimous consent.
https://www.aljazeera.com/news/2020/05/congress-approves-china-sanctions-uighur-crackdown-200528023757313.html

Notice: action on this is completely bipartisan. 4 years ago, Trump was alone on the China issue. He is not alone any longer. China’s soft power works really well when just a few people in the US try to act; soft power is impotent when the whole of the nation is focused on the issue.

Now there is talk of limiting the number of mainlanders who can attend college in America. Even Biden, who famously said, “China is going to eat our lunch? Come on, man!”, is now suggesting Trump has been too soft on China.

From China’s side, there is “Wolf Warrior Diplomacy”, inspired by strongly nationalistic action-film movies produced in the mainland. Article is worth reading. I do not think there will be many – if any – US companies remaining in China once the Wolf Warriors take over.
https://www.economist.com/china/2020/05/28/chinas-wolf-warrior-diplomacy-gamble

Why did Xi suddenly decide – last year – that he wants to seize Hong Kong 27 years early? I have no idea. But I suspect historians will mark it as a key decision, similar to the decision to allow international flights out of infected Wuhan, while blocking travel domestically.

Hong Kong will be the next flashpoint. And I don’t think it will be long in coming – Trump has a presser on it tomorrow, in fact.

I suspect any dips in PM are probably buying opportunities.

Trump did not hold back the least bit in regards to China in his press conference.  Seems like it is totally game on.

There’s nothing like geopolitical tension and uncertainty unlike what we’ve seen for years between the 2 most powerful countries in the world to make stocks go up and gold to dump.  WTF??

* pulling the plug on US support for the WHO

* eliminated visas to mainlanders who have been linked with the security services.

* “studying” China corporate listings in the US

The personal savings rate hit a historic 33% in April, the U.S. Bureau of Economic Analysis said Friday.
“There is a tremendous uncertainty and virus fear that is lingering and that is restraining people’s desire to go out and spend as they normally would,” said Gregory Daco, chief U.S. economist at Oxford Economics.
With the U.S. consumer accounting for more two-thirds of the economy, the economic recovery depends on whether the increase in savings is a result of shutdowns or structural changes in consumer habits, analysts said.
The increase in savings came as spending declined by a record 13.6% for the month.

Talked saving gift wrapping paper several weeks ago. Still think frugality is coming our way.  Too many people without the means to support their families in this environment.  Deflation dead ahead.

Is Trump Hoover or FDR?