Gold fell hard in Asia and London, making its low roughly at the open in New York. It then rebounded, ending the day almost flat. The bullish doji star candle was a bearish continuation, and forecaster dropped, moving deeper into its downtrend. Gold remains is in an uptrend in the weekly and monthly timeframes.

Gold/euros fell -2.95 [-0.19%] to 1568.92 on moderately heavy volume. The bullish doji star candle was a bearish continuation, forecaster dropped, moving deeper into its downtrend. Gold/euros is in an uptrend in the weekly and monthly timeframes.

Doji candles are usually pretty weak; this one was no exception. No reversal today; we need a close above today’s high tomorrow for that.

Note that the volume-weighted GC contract rolled today to GCQ20; at stockcharts, this shows up by the continuous $GOLD contract showing a $21 [+1.21%] gain. This gain is a “contract roll lie.” Nobody made $21 yesterday on their futures holdings. By comparison, GLD was up +0.18%. 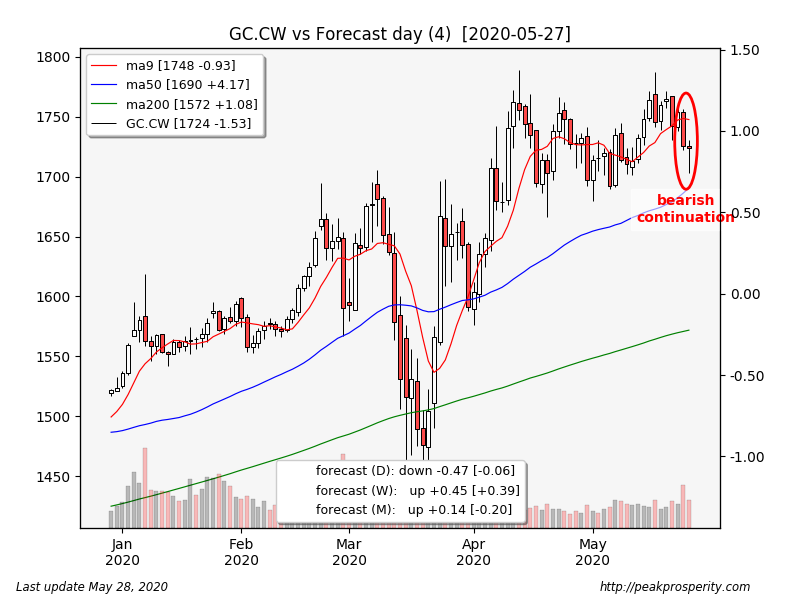 Silver also made its day low roughly at the US open, but then it rallied all day long, closing near the highs of the day. The long white candle was a bearish continuation, but forecaster dropped, moving deeper into its downtrend. Silver is in an uptrend in the weekly and monthly timeframes.

No reversal for silver either; but there really isn’t much of a downtrend to speak of. Silver remains above all 3 moving averages, and the forecaster downtrend is slight. Traders really bought the dip today in silver – seemingly in preference to gold. That’s what the big drop in gold/silver ratio is telling us. 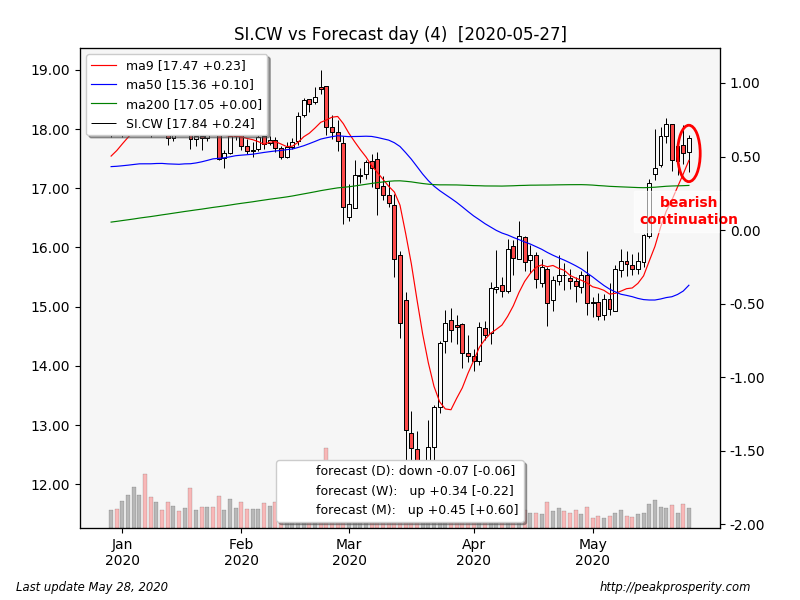 Miners gapped down hard at the open, chopped sideways until about noon, and then rallied through end of day, closing at the highs, erasing most of the losses. GDX fell -1.09% on moderately heavy volume, while GDXJ rose +0.02% on moderate volume. XAU moved down -0.21%, the closing white marubozu candle was a bearish continuation, forecaster dropped, moving deeper into its downtrend. XAU is in a downtrend in both the daily and weekly timeframes.

It appeared as though traders bought the dip in the miners today, but so far, no reversal. 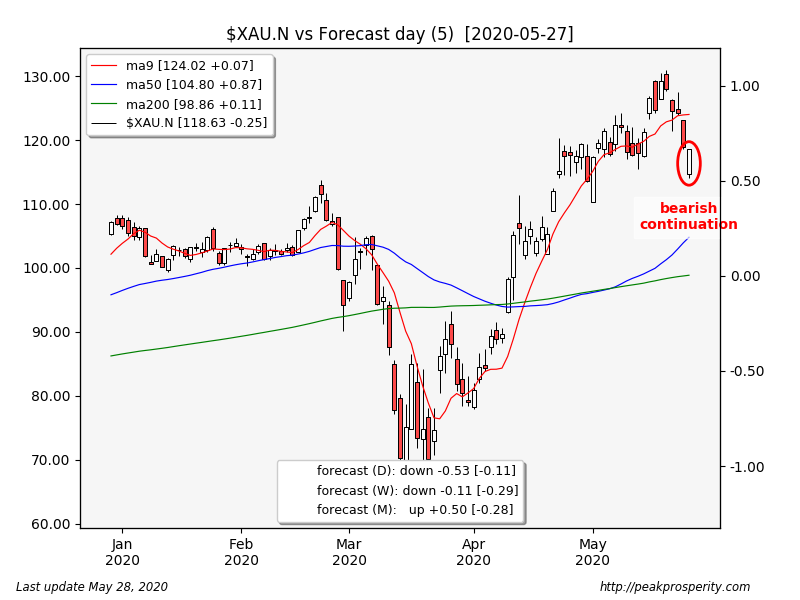 Copper fell -0.03 [-1.24%] to 2.38 on heavy volume. The spinning top candle was a possible bullish reversal (31%), but forecaster dropped, falling into a downtrend. Copper is in a downtrend in the daily timeframe, and is in a state of no-trend on the weekly and monthly.

Today copper closed below the 9 MA. This is a sign of trouble, although it has done this a number of times over the
past few months. 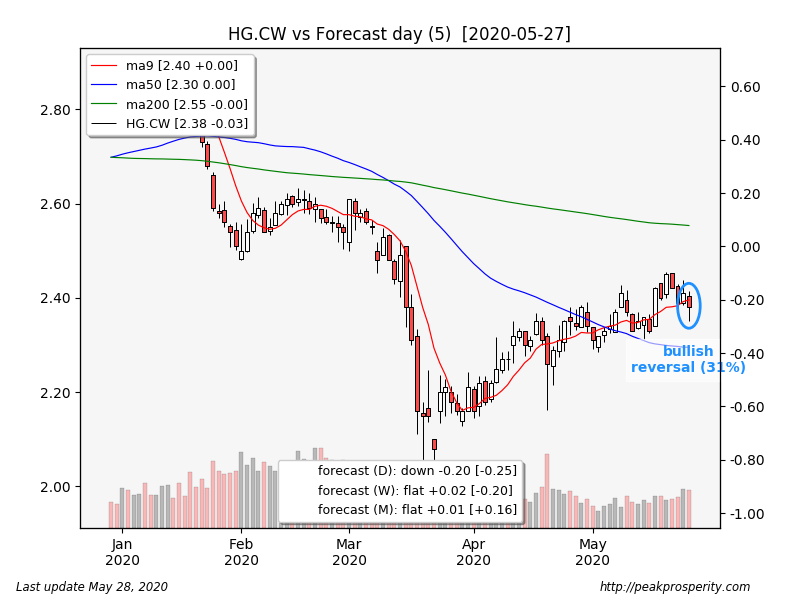 The buck climbed +0.13 [+0.13%] to 99.04 on heavy volume. The long legged doji candle was a possible bullish reversal (30%), forecaster climbed, but remains in a downtrend. The buck is in a downtrend in both the daily and weekly timeframes. 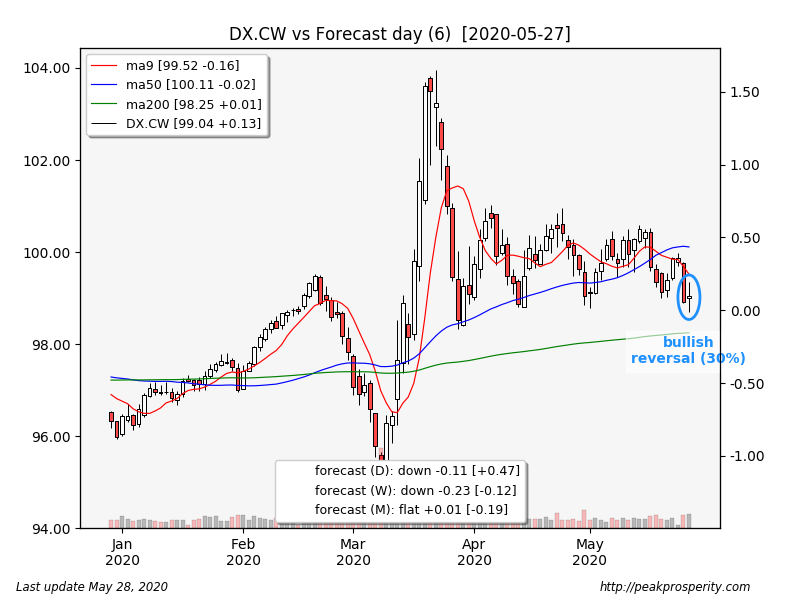 SPX rallied +44.36 [+1.48%] to 3036.13 on moderately heavy volume. The hammer candle was neutral, forecaster climbed, moving higher into its uptrend. SPX is in an uptrend in all three timeframes. 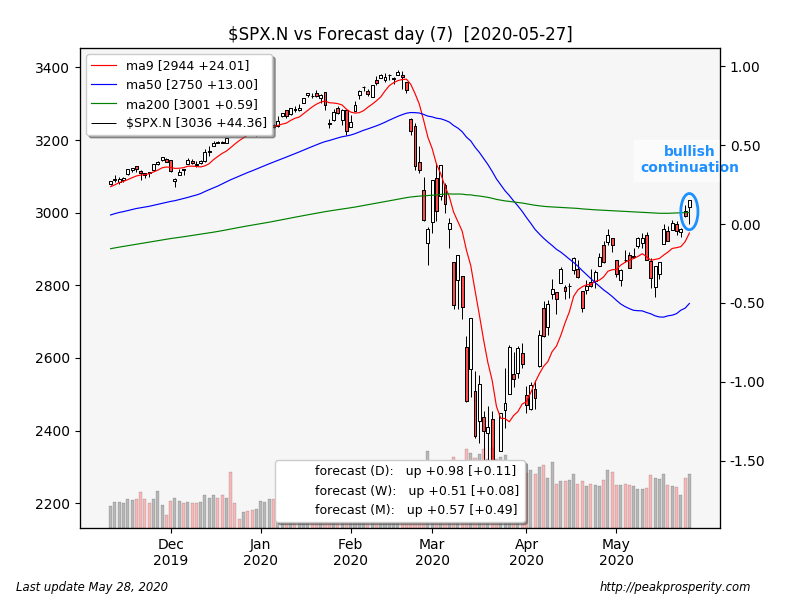 TLT fell -0.18%. The high wave candle was neutral, forecaster dropped, moving deeper into its downtrend. TLT is in an uptrend in the weekly timeframe. The 30-Year yield was unchanged at +0.0 bp to +1.43%.

TY inched down -0.09%. The long white candle was a bearish continuation, forecaster climbed, but remains in a downtrend. TY is in a downtrend in both the daily and weekly timeframes. The 10-Year yield fell -2.0 bp to +0.67%.

The 10-year continues to move sideways, in what looks to be a very narrow range. I’m guessing the Fed is putting a floor on bond prices with their 100s of billions of purchases per week. The chart is really starting to look unnatural. At least to me. 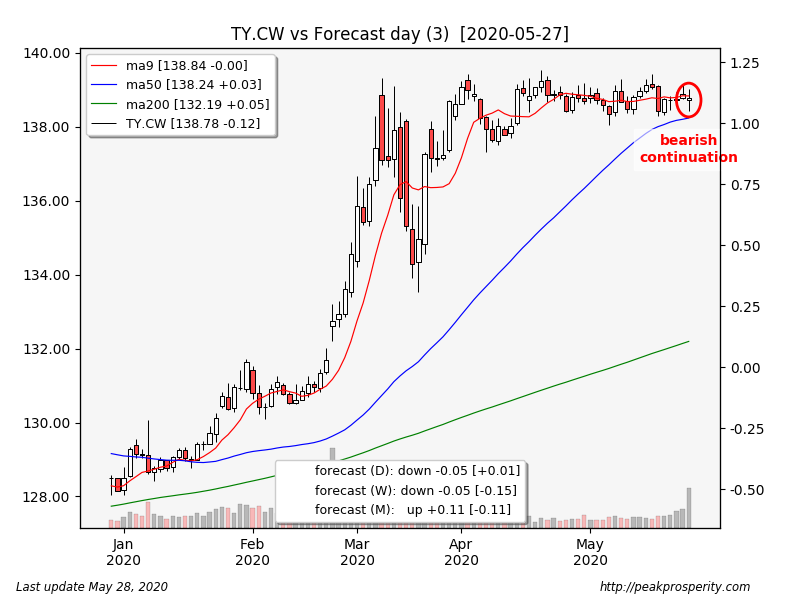 JNK inched up +0.30%. The long black candle was a bullish continuation, forecaster dropped, but remains in an uptrend. JNK is in an uptrend in the daily and weekly timeframes. 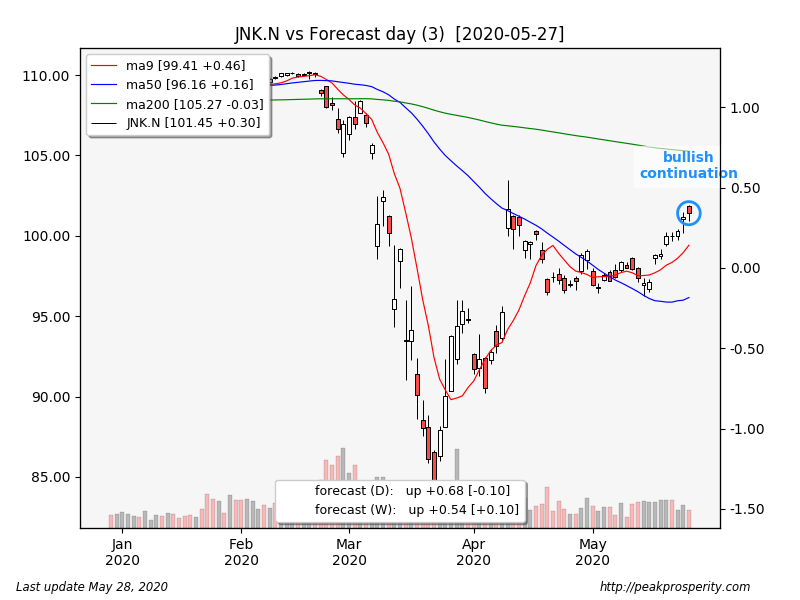 My concerns about premiums jumping when the country re-opened did not come to pass. Premiums on both silver and gold continue to decline, although shortages remain in big bar silver.

Gold, silver, and the miners all found buyers today after a few days of correction, with silver looking the strongest by far. In fact, silver has hardly corrected at all.

Risk assets continue to make new highs; SPX closed above the 200 MA, with the banksters in the lead. This is all about the new “corona virus recovery plan.”

How much is the plan going to spend? It is a bit confusing – basically the answer is 500 billion in grants, with another 250 billion in loans, and the overall EU budget increasing over the next 7 years by 160 billion per year. That’s how you get 1,850 billion Euros, which is really just 500 billion.

Bottom-lining it, it means 80 billion Euros for Spain and Italy, and 20 billion for Greece. Is it enough? Italy’s GDP is 1,893 billion euros, so that’s 4.2% of GDP. By comparison, the US has printed and spent – maybe 2.7 trillion, with the GDP 20.54 trillion, or 13% of GDP. So 4.2% of GDP may be enough to keep Italy in the EU, but it will probably not be enough to keep Italy from entering a depression.

But that is still a ways in the future. And it does kick the can down the road – something that our members who live across the pond have reminded me (time and again) that: this is what the EU does best. Looks like they were right once more.

By their constitutional court ruling, Germany may have avoided mass money printing, and limited the amount of corona virus spending. We will have to see how it goes.

This news seems to have completely overshadowed the other news, namely, that Pompeo just declared that Hong Kong was no longer “sufficiently autonomous”:

US Secretary of State Mike Pompeo has declared that the US no longer considers Hong Kong autonomous from China, following Beijing’s announcement that it will draft a national security law. The legislation will bypass the local legislature and will be inserted into the semi-autonomous region’s mini-constitution. The law seeks to criminalise subversion, secession, foreign interference and terrorism, causing alarm over the city’s autonomy and freedoms.

Beijing gets to decide what “subversion” is. That’s the problem.

The declaration by Pompeo allows Trump to pull the plug on Hong Kong’s trade status. Once Trump does this, there will (probably) be a cascade of bank-unfriendly events as Hong Kong stops being a financial hub of Southeast Asia. Of course I’ve been talking about this for months, and nothing has happened; this is another milestone along that road. I keep expecting pandemonium to erupt at each step. Instead, it seems like the frog just sits there in the pot, up to its eyeballs in the ever-warming water. Like a stopped clock, someday I’ll be right.

So – right now – that is one fire put out (for now) in the EU, while another one starts up in Asia.

So – right now – that is one fire put out (for now) in the EU, while another one starts up in Asia.

Just to be clear I usually hate ‘my’ EU’s can-kicking. I’d love it if they stopped papering over the cracks and let zombie banks, companies and maybe even a country go bust. I think that would be more natural and make for a stronger system. Not that I think the market is always right, this needs to be underpinned by regulation that ensures that the long term environmental costs are priced into any economic decision.

I think the hope behind all the can-kicking is that it gives southern european culture time to shift to a more austere way of running government. I don’t really see that ever happening through fines, cajoling and political pressure, athough maybe to some extent it’s happening in Greece, where the EU felt it could play hard ball.

My feeling is that this could only really change wholesale after one of these countries actually leaves the eurozone. Yes they could then devalue and boost exports but surely they would have to pay eye-watering rates on any debt they want to take on.

I doubt any country would voluntarily go this route so it would take a crisis to finally get us to work through this major euro design flaw. Germany would have to pull the trigger but wouldn’t want to be seen to be doing so. So my best guess on timing is the next financial crisis, so that they can blame it on the banksters.

Anyway, nice to be right for once, mr market has been kicking the teeth out of my silver shorts this month.

The case for owning precious metals is easy to make, especially silver. According to Rubino, it now takes 100 ounces of silver to equal the value of 1 ounce of gold. That’s a near record of 100 to 1 silver/gold ratio. Rubino contends, “The silver/gold ratio says silver is clearly a buy based on historical trends and the relationship between gold and silver. . . . You would expect silver going forward to outperform gold, and you would expect gold to go up as well. . . . This is now a bull market, and they will both go up, but silver will outperform gold. . . . There is just so much more debt in the world, and there is so much more of a need for safe haven assets that you would expect silver to blow right through its previous high levels. This time around, it could be totally spectacular with what happens with silver. There is going to come a time when everyone will want to talk about silver, but that day is not yet.”

Suddenly Everything is Too Big to Fail – John Rubino

It is really very useful to have you around, you know.  🙂

I really did think the German court’s actions would be a catalyst for real change.  I mean, in some sense it was a catalyst: it forced the behind-the-scenes money printing rescues out into the open, where it really belonged.  Instead of unelected bureaucrats running the show behind closed doors “keeping the project going” (at the expense of Germany), now everyone gets to vote on the policy.  Which is totally as it should be.

The whole north-south divide is really the fatal flaw here.  You have a frugal wife and a spendthrift husband, and at some point, it will end up being an irreconcilable point of contention.  When Italy ran its own monetary affairs, it seemed to delight in irresponsibility.  That’s just how they’re built.  Did we think they would change when they joined up?  Not so much, as it turns out.

I think the EU is fine, really fine even, a great project.  The Eurozone – it pretty much has to blow up, from the sheer force of its internal contradictions.

Once they have their own currencies again, Spain can have its UBI – and pay for it with that eye-watering debt (and/or MMT, perhaps?) – while Germany keeps its debt/GDP at roughly 60% in that orderly Germanic way of theirs.