Gold moved slightly higher in Asia, but lost the gains during the London session, and then started to sell off hard after the open in New York. Gold ended the day near the lows. The opening black marubozu candle was a bearish continuation, forecaster dropped, moving deeper into its downtrend. Gold is still in an uptrend in the weekly and monthly timeframes.

Gold/euros plunged -36.48 [-2.27%] to 1571.86 on extremely heavy volume. The opening black marubozu candle was a bearish continuation, forecaster climbed, but remains in a downtrend. Gold/euros is in an uptrend in the weekly and monthly timeframes.

Gold plunged through the 9 MA today, closing below last Friday’s low. Forecaster dropped into a downtrend. This looks bearish. Note that gold/Euros did very poorly; even a strong plunge in the buck wasn’t enough to keep gold afloat. It looks as though our friends across the pond sold a fair amount of gold today. 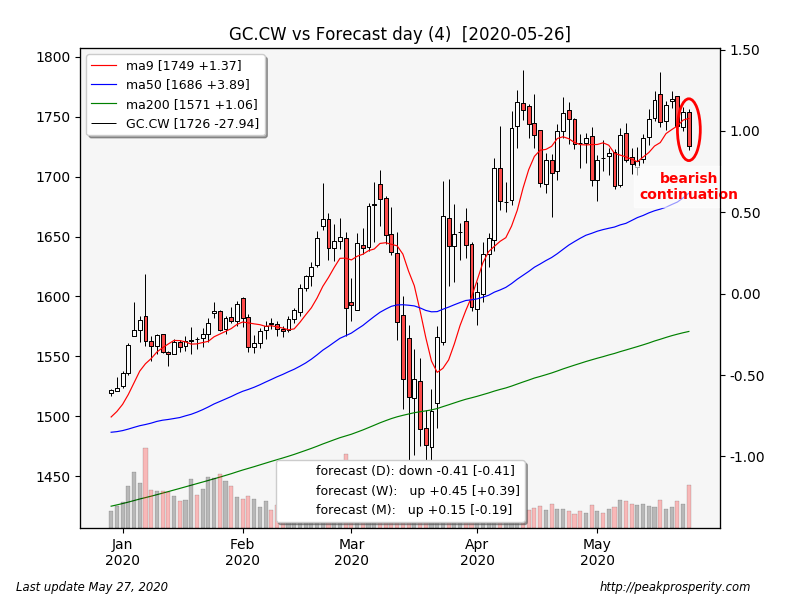 Silver rallied in Asia, then sold off hard at the open in New York, wiping out all its gains and then some. The long black candle was a low-percentage bearish reversal (29%), forecaster fell, dropping into a downtrend. Silver is still in an uptrend in the weekly and monthly timeframes.

Silver looked a lot stronger than gold today – it almost broke out to a new high, and it remains above all 3 moving averages. Furthermore, the forecaster downtrend is very slight. 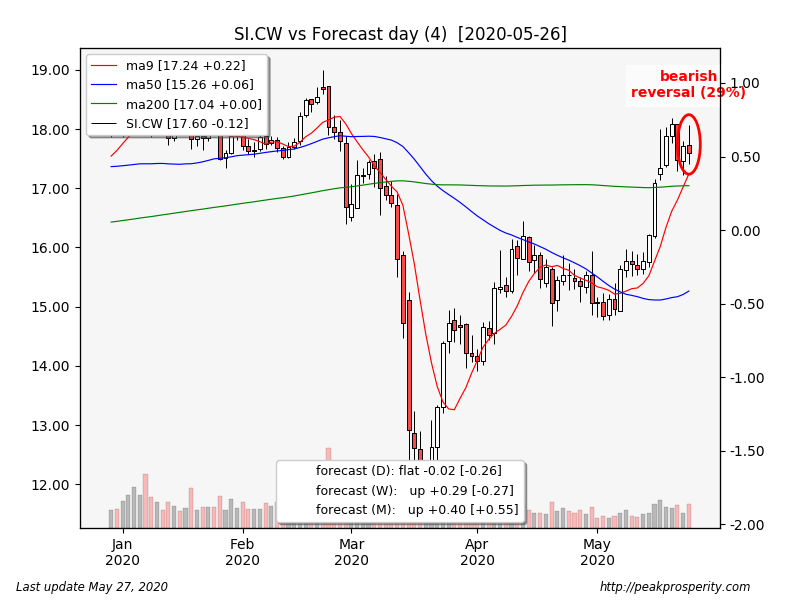 Miners sold off hard in the first 30 minutes of trading, then moved slowly lower for the remainder of the day. GDX plunged -4.14% on moderate volume, and GDXJ dropped -3.36% on moderate volume. XAU fell -4.31%, the black marubozu was a bearish continuation, and forecaster climbed, but remains in a downtrend. XAU is in a downtrend in both the daily and weekly timeframes. 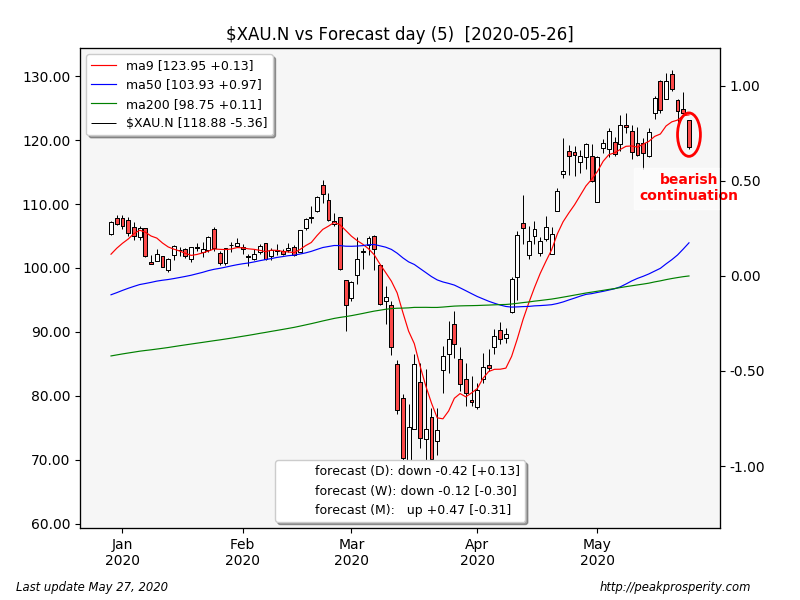 Copper climbed +0.02 [+0.84%] to 2.41 on moderately heavy volume. The spinning top candle was a possible bearish reversal (31%), forecaster climbed, rising into an uptrend. Copper is in an uptrend in the daily and weekly timeframes.

While copper kept its head above water (and its head just above that 9 MA), the copper uptrend remains very weak. 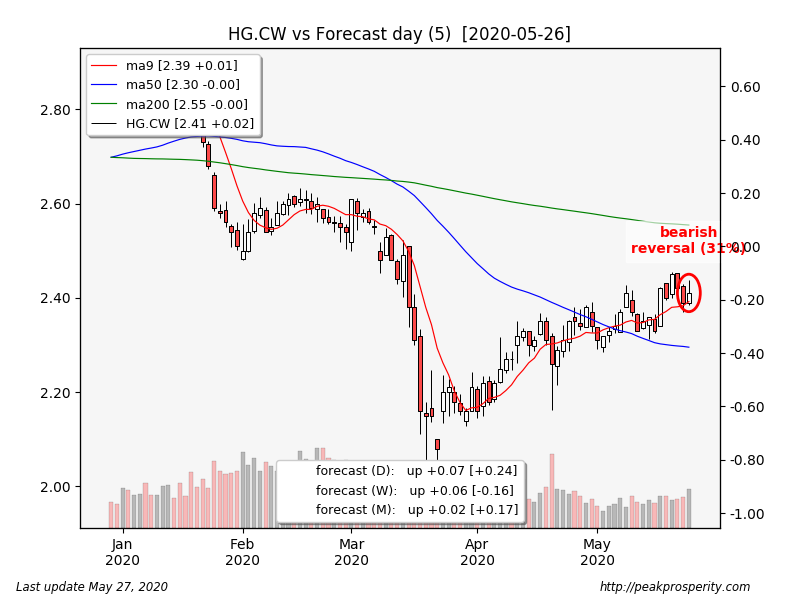 The buck plunged -0.97 [-0.97%] to 98.91 on heavy volume. The swing high2 candle was a reasonably strong bearish reversal (42%), forecaster fell, moving deeper into its downtrend. The buck is in a downtrend in both the daily and weekly timeframes.

Today saw a new multi-month high for AUD – it is right up against the 200 MA, for the first time since January. The buck made a new monthly closing low.

The move in the buck was – mostly – due to happy news out of Europe: a bailout of Southern Europe appears to be in the offing. Maybe. 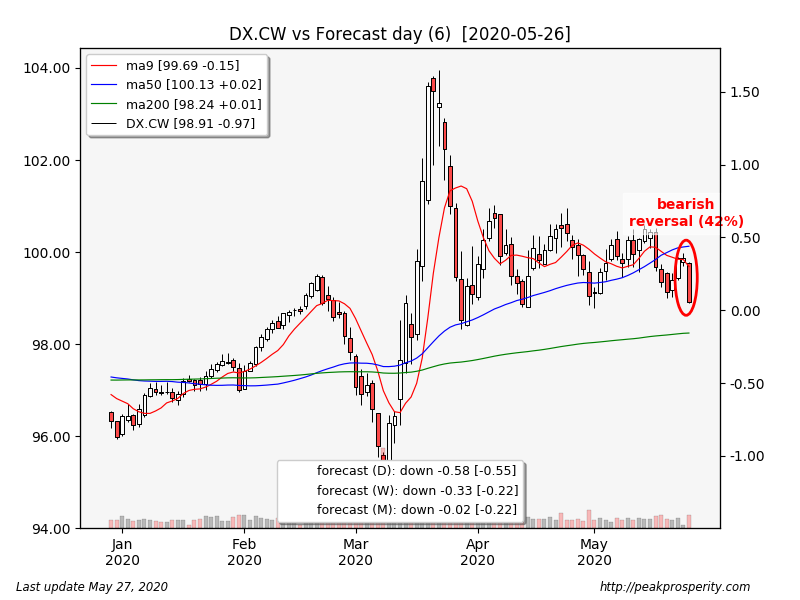 Crude rose +0.66 [+1.96%] to 34.29 on moderately light volume. The long white candle was a bullish continuation, and forecaster dropped, but remains in an uptrend. Crude is in an uptrend in all three timeframes. 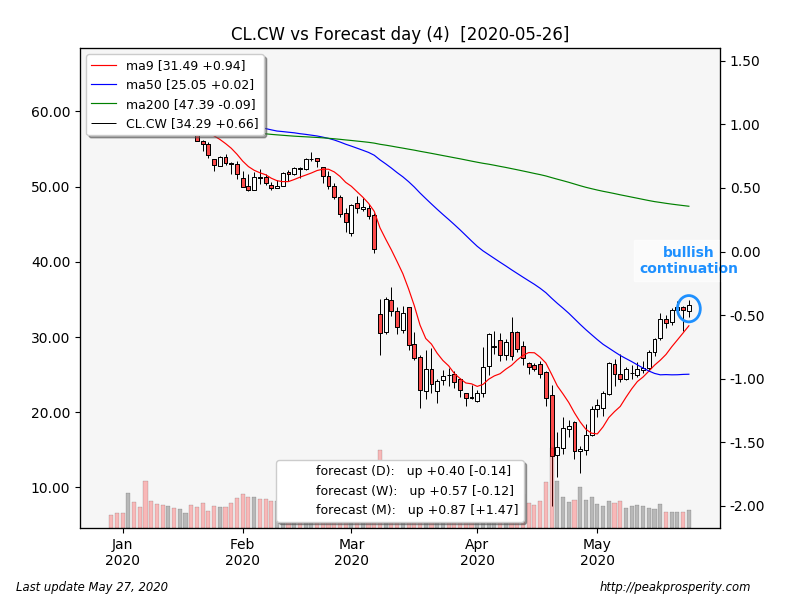 SPX rallied +36.32 [+1.23%] to 2991.77 on moderate volume. The confirmed bullish nr7 candle was a bullish continuation, and forecaster climbed, moving higher into its uptrend. SPX remains in an uptrend in all three timeframes.

New multi-month high for equities today. Banksters did best. SPX ran into resistance at the 200 MA. 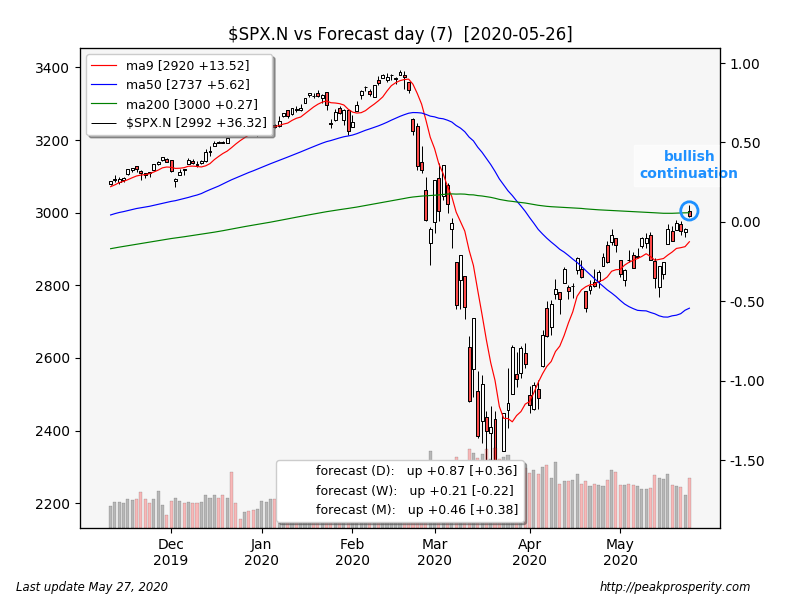 TLT fell -1.34%. The confirmed bearish nr7 candle was a reasonably strong bearish reversal (42%), forecaster dropped, moving deeper into its downtrend. TLT is in an uptrend in the weekly timeframe. The 30-Year yield rose +6.0 bp to +1.43%.

TY moved up +0.10%. The spinning top candle was unrated, forecaster climbed, but remains in a downtrend. TY is in an uptrend in the weekly and monthly timeframes. The 10-Year yield rose +4.0 bp to +0.70%.

The 30-year continues to look weak, while the 10-year is chopping sideways. The Fed has destroyed the US treasury bond market, I suspect. 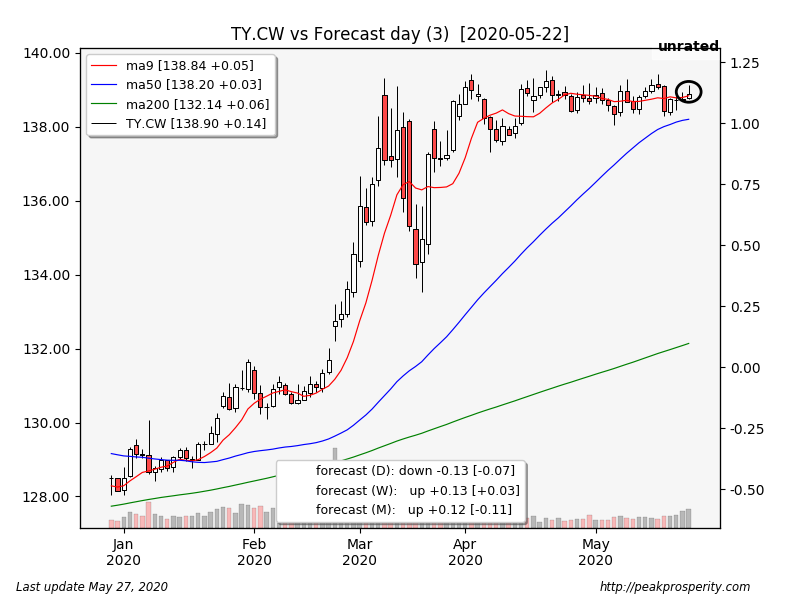 JNK climbed +0.86%. The high wave candle was a bullish continuation, forecaster dropped, but remains in an uptrend. JNK is in an uptrend in the daily and weekly timeframes.

Today marked a new month high for crappy debt. The Hertz bankruptcy didn’t seem to faze anyone. There’s more where that came from, I suspect. Nevertheless, crappy debt remains in a strong uptrend.

Still shortages in silver. Slight premium at BV, with the physical ETFs mixed.

Gold and the miners were hit pretty hard today, while silver, platinum, palladium, and copper all managed to do reasonably well.

Long-dated debt sold off, while the 10-year just moved sideways.

Risk assets took off, with equities making a new post-pandemic-crash high. Crappy debt made a new high too, but it was only a monthly high – it lags a bit behind equities.

The buck plunged – actually the Euro rallied, on news that the unelected European Commission was “likely to mobilize” a 750 billion Euro fund; 500 billion in grants, and 250 billion in loans.

Is this enough money to rescue now-tourist-free Southern Europe? Is it Peace In Our Time? Well the currency markets definitely seem to approve.

What’s the mechanism for the EC to spend a cool 500 billion it doesn’t have? Corona-bonds? We know France and Germany are already on board. Now they just need the other 25 member nations to vote yes.

Perhaps related: bankster stocks shot higher today too, with financial ETF XLF jumping +5.20%. They were the top-performing sector in equity-land. Is this about worry easing from credit default swaps – due to the prospect of bank failures in Southern Europe lessening? Maybe.

Will 750 billion be enough? That was just the down payment for the US. I mean, it surely beats zero. But with no tourists, how long will this money last? Maybe the answer is 3-6 months in the future.

However, it may be – just – enough to avert a near-term Eurozone exit by Italy and/or Spain. Assuming the 25-member nations actually vote yes. “See Italy, we do care.” Get well soon.

Oz Mid Week Update:  ASX(S&P200) is off to the races with three days of big gains and the AUD is loving it as well.  Not so much from the PMs with both getting a hammering especially Gold.  Looks like a rotation out of PMs and into equities.

One reason I heard today regarding the rise in the AUD, is that Iron Ore exports is looking strong (both in volume and price) due to production issues in Brazil as their COVID issues are getting pretty bad.

Great report DF, too bad about the miners. I thought they had one more push higher, but it looks like the sector rotation is well on it’s way now. Tech is out. Gold is out. The banks are back in!

It’s all blue skies from here.

US Secretary of State Mike Pompeo declared Wednesday that Hong Kong no longer enjoys the autonomy promised by Beijing, stripping the financial hub of its special status under US law.

Hours before Beijing will hold a key vote on a controversial new security law on Hong Kong, Pompeo sent a notice to Congress that China was not living up to obligations from before it regained control of the territory from Britain in 1997.

“I certified to Congress today that Hong Kong does not continue to warrant treatment under United States laws in the same manner as US laws were applied to Hong Kong before July 1997,” Pompeo said in a statement.

“No reasonable person can assert today that Hong Kong maintains a high degree of autonomy from China, given facts on the ground.”

The law as relates to Hong Kong:

Beijing promised Hong Kong a “high degree of autonomy” for 50 years when it regained sovereignty over the city in 1997, but protesters say freedoms have been steadily eroded.

The new act is an amendment to a 1992 law that has underpinned U.S. relations with Hong Kong, affording the territory special status as separate from China – in trade, transport and other areas.

Under the 1992 law, the U.S. president can issue an executive order suspending elements of Hong Kong’s special status if the president determines that the territory is “not sufficiently autonomous” from Beijing.

And that’s what Pompeo just did.  “Not sufficiently autonomous.”  Now Trump can alter the US-HK trade relationship at will via executive order.

Worst case, it will result in the US treating Hong Kong just like any other mainland Chinese city.

If that occurs – and maybe even if it doesn’t – the USD-HKD peg will snap, leading to that banking crisis I’ve been talking about forever.  Credit Default swaps being triggered, heaven only knows which banks are exposed, etc.  The usual.

I think our brief gold correction is over.

A B.C. Supreme Court judge has delivered a major blow to Meng Wanzhou, ruling that extradition proceedings against the Huawei executive should proceed.

In a widely anticipated decision on so-called double criminality, Associate Chief Justice Heather Holmes said the offence Meng is accused of by American prosecutors would be considered a crime if it occurred in Canada.

The 48-year-old chief financial officer of the telecommunications giant is charged with fraud in the United States for allegedly deceiving banks into a possible violation of U.S. economic sanctions against Iran.

China will not be happy….

No kidding.  I’d look for more Canadians to be arrested for no particular reason, assuming any Canadian citizens have been foolish enough to remain in the mainland after the last batch were tossed in prison for “whatever”.

I too think it is the Eye of the Storm but I don’t know what event is going to cause the shift in sentiment.  At present, the Four Horsemen themselves could appear and equities would jump such is the optimism out there.  Lets see what happens today with the opening in Asia but so far it looks like HK is not having much of an impact on futures or currencies.

I read an interesting piece awhile ago about China’s strategy on destabilising the Five Eyes community (US UK CAN AU NZ).  Funny how these are the countries all copping a tongue lashing at present.

The two Michael’s are human pawns and from the get go have been treated appallingly while MW lives a peachy existence in Vancouver. This is one of those instances where an eye for an eye would be satisfying to see. At the very least she should be in prison with no access to anyone, the same as our guys. That would still be a luxury compared to what is apparently happening on the other side.

Not going to happen though… this stinks to high heaven, and as Dave said, should serve as a warning to any Canadians in mainland China.