Gold fell in Asia, tried to recover in London, then it dropped hard just after the open in New York, with the day low happening at 10:45, with a modest bounce into the close. The bearish engulfing candle was a probable bearish reversal (50%), forecaster dropped, moving deeper into its downtrend. Gold is now in an uptrend in only the monthly timeframe.

Gold/euros fell -16.94 [-1.05%] to 1589.83 on moderately heavy volume. The confirmed bearish nr7 candle was a reasonably strong bearish reversal (43%), forecaster dropped, moving deeper into its downtrend. Gold/euros is in an uptrend in the weekly and monthly timeframes.

Today’s bearish candle pattern had a very high rating. Daily forecaster bearish, weekly forecaster now flat. This looks like a bearish reversal for gold. There was no short-covering today, which I take to be a bearish sign. 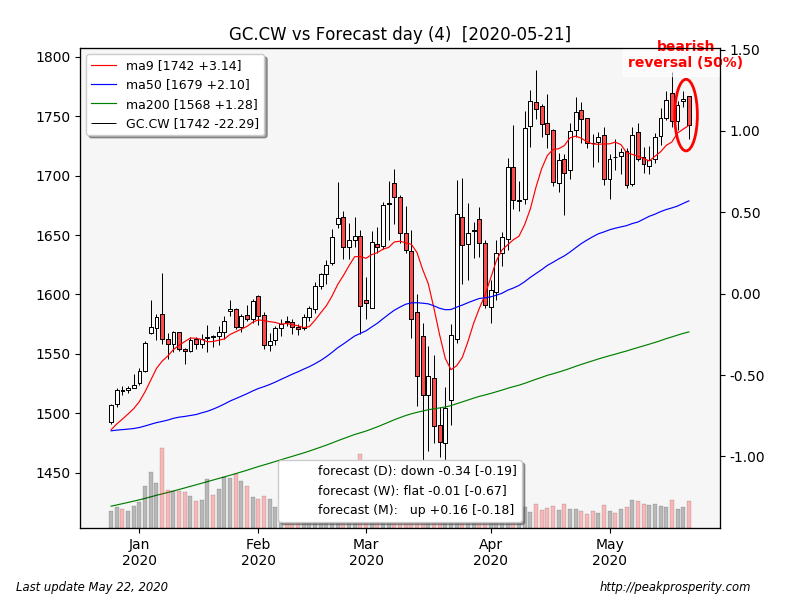 Silver plunged twice today; once in Asia, and once more starting at 9:30 am in New York. The bounce off the 10:45 am low was not strong at all. The swing high candle pattern was a likely bearish reversal (62%), forecaster dropped, but remains in an uptrend. Silver is in an uptrend in all three timeframes.

As with gold, today’s bearish candle pattern was very strong. Daily forecaster is on the edge of a reversal too. This looks like a near-term top for silver. 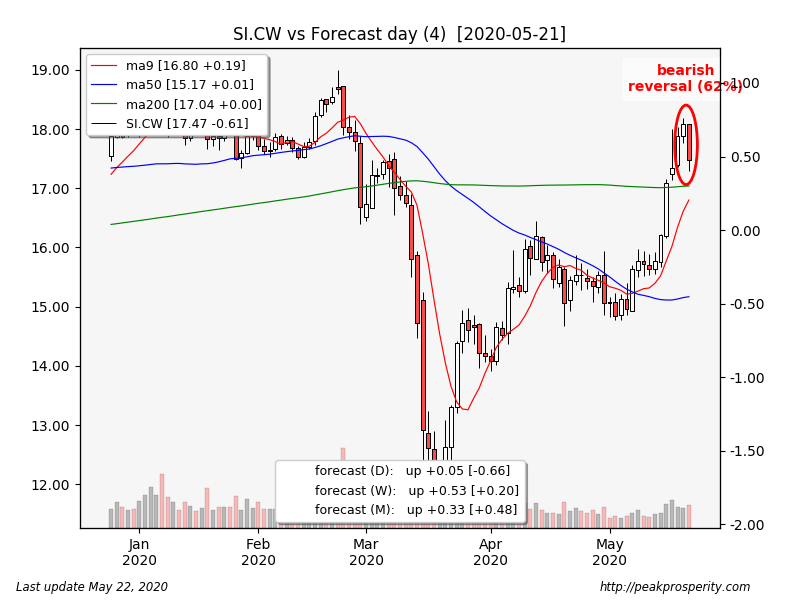 Miners gapped down at the open, and sold off for the first few hours, but rebounded during the trading day, recovering most of the losses by the end. GDX fell -2.59% on moderate volume, and GDXJ dropped -2.69% on moderately light volume. XAU moved down -2.75%, the swing high candle was a reasonably strong bearish reversal (43%), forecaster dropped, dropping into a downtrend. XAU is in an uptrend in the weekly and monthly timeframes.

The miner swing high wasn’t nearly as highly rated as silver’s reversal pattern, and XAU has yet to close bellow the 9 MA. Even so, it does appear that the miners have put in a top, with the daily forecaster dropping into a downtrend. 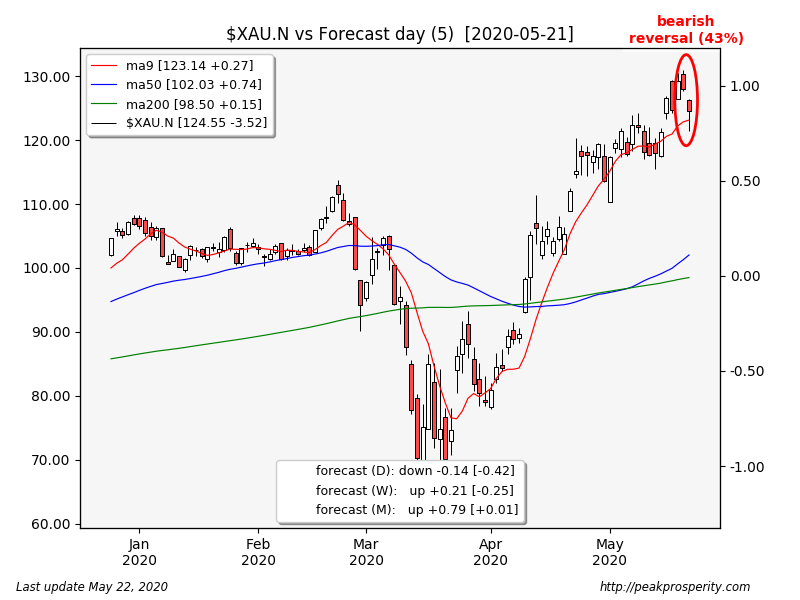 Copper fell -0.03 [-1.22%] to 2.42 on moderate volume. The dark cloud cover candle was a low-percentage bearish reversal (27%), forecaster dropped, but remains in an uptrend. Copper is in an uptrend in the daily and weekly timeframes.

Copper has yet to reverse, and the bearish candle pattern was not all that strong, but the copper uptrend remains relatively weak. 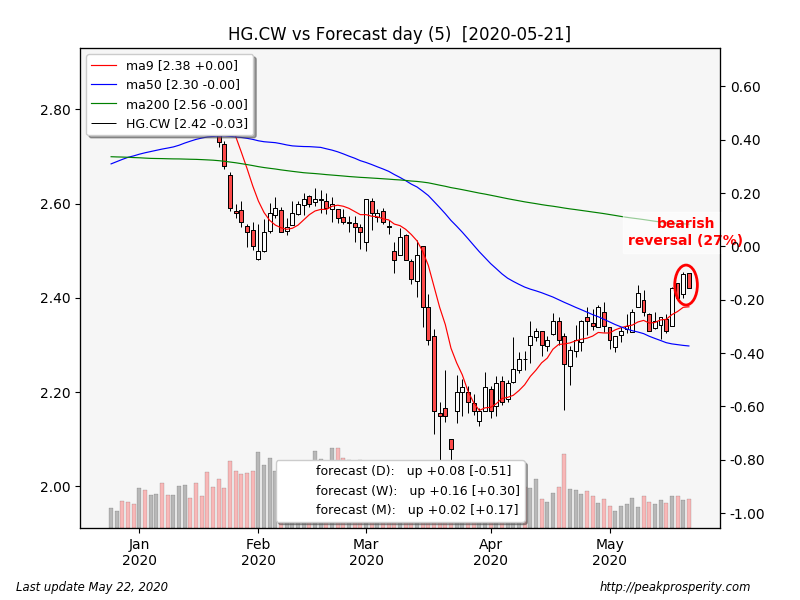 The buck climbed +0.27 [+0.27%] to 99.40 on moderate volume. The bullish harami candle was a reasonably strong bullish reversal (40%), forecaster climbed, but remains in a downtrend. The buck is in a downtrend in both the daily and weekly timeframes.

This was a very strong bullish harami pattern; normally harami patterns tend to be pretty feeble. No bullish reversal yet for the forecaster though. 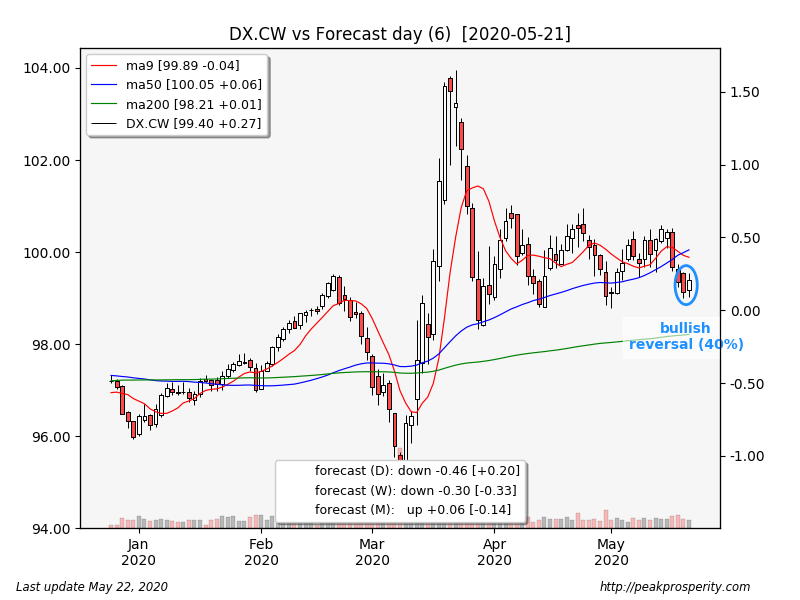 Crude dropped +0.40 [+1.19%] to 33.98 on moderately light volume. The short white candle was a low-percentage bearish reversal (25%), forecaster dropped, but remains in an uptrend. Crude is in an uptrend in all three timeframes.

It was another new high for crude. Uptrend remains quite strong. The round number 40 is the next resistance level to overcome for crude. 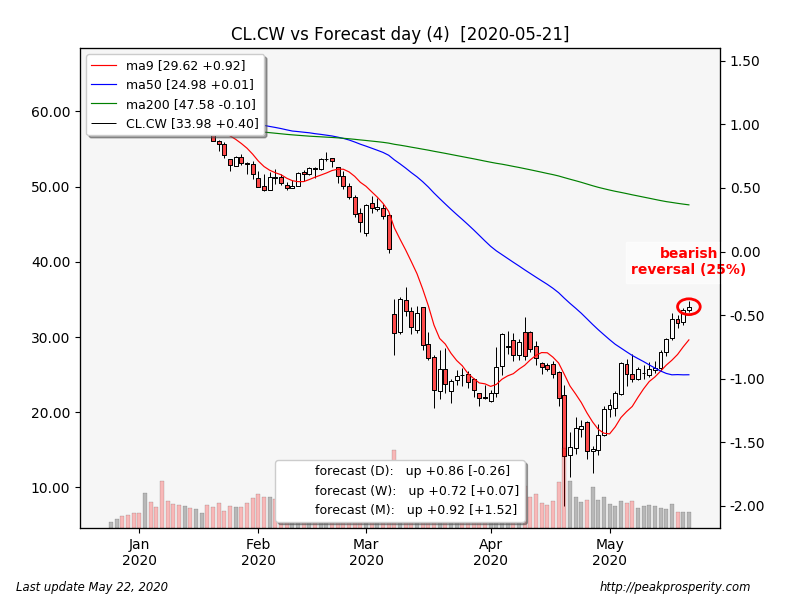 While the candle pattern was bearish, the forecaster remains positive. NYSE Advance Ratio suggests the selling was not broad-based (53% of issues advanced today), which is a bullish sign. I’m going to say no reversal yet for SPX. 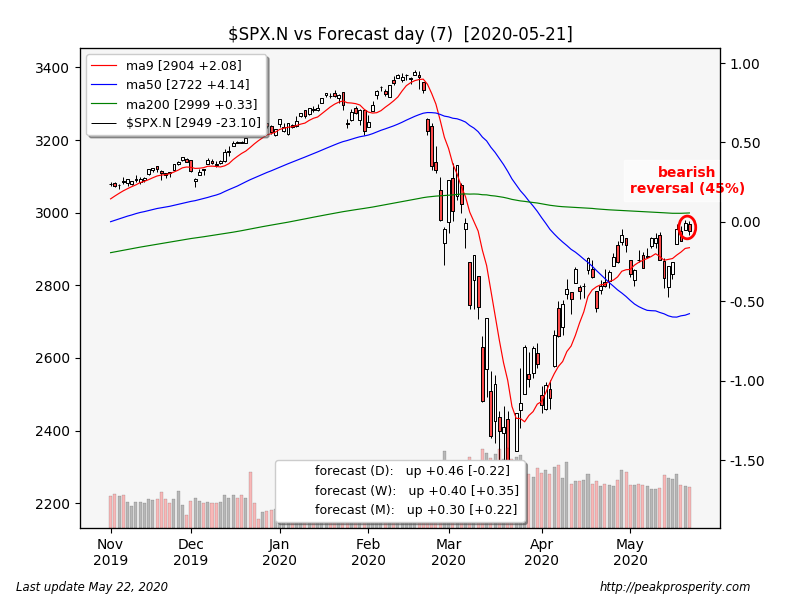 TLT climbed +0.25%. The short black candle was a bullish continuation, forecaster climbed, but remains in a downtrend. TLT is in a downtrend in both the daily and weekly timeframes. The 30-Year yield fell -1.0 bp to +1.39%.

TY inched up +0.02%. The spinning top candle was a bullish continuation, forecaster climbed, but remains in a downtrend. TY is in an uptrend in the weekly and monthly timeframes. The 10-Year yield was unchanged at +0.0 bp to +0.68%. 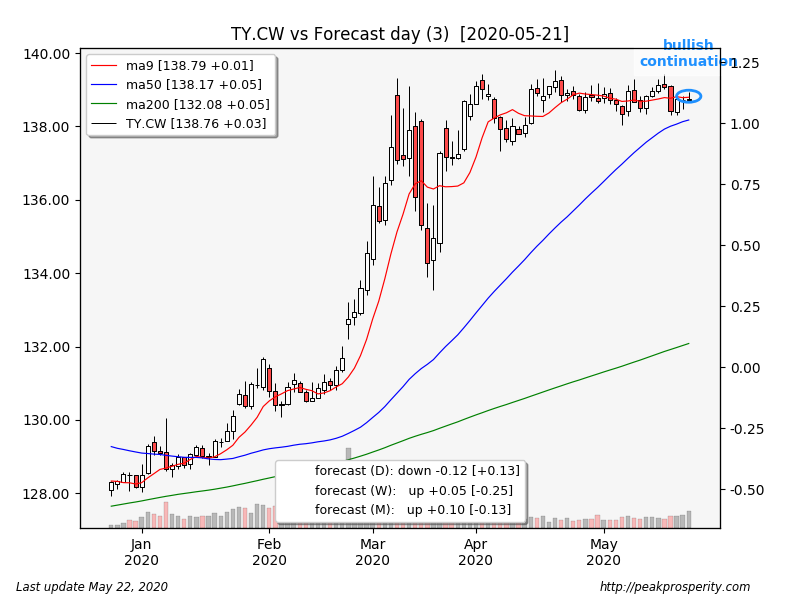 JNK inched down -0.02%. The bearish doji star candle was a bullish continuation, forecaster dropped, but remains in an uptrend. JNK is in an uptrend in the daily and weekly timeframes.

No bearish reversal for JNK. 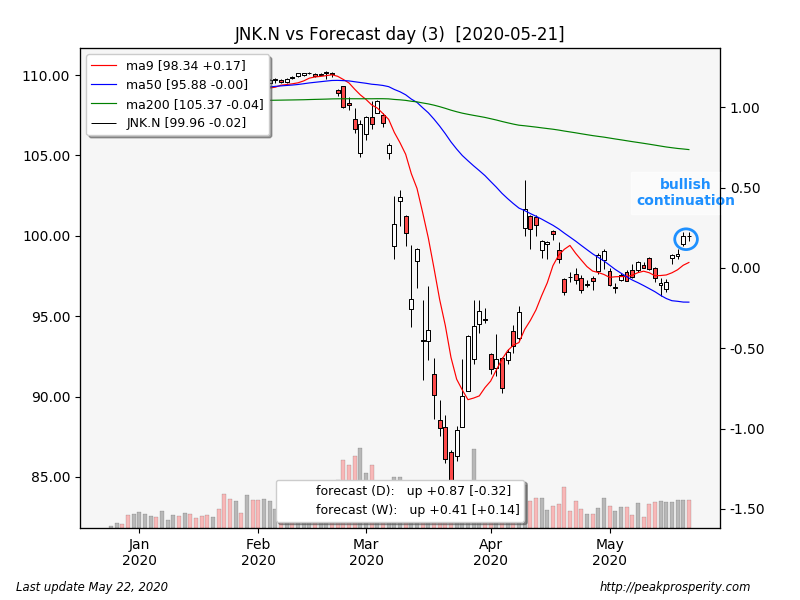 Gold, silver, and the miners all sold off today – with the miners bouncing back the most by the close. Candle prints were all bearish, forecasters dropped into downtrends; at the moment, it appears to be a bearish reversal for PM.

The other metals sold off too, with platinum being hit hardest of all. The almost-7% plunge in platinum dropped it back below the 200 MA. If you felt as though you had missed out on a chance to buy cheap platinum, you may get a second bite at the apple within the next few days.

Crude made yet another new high. The crude uptrend is quite strong.

In the larger picture area, I just saw a warning signal from Armstrong about the HKD-USD peg:

China’s Communist Party will impose a sweeping national security law in Hong Kong during the annual meeting of its top political body, criminalizing “foreign interference” along with secessionist activities and subversion of state power. This is directed at the protests for independence. It is a very dramatic and bold move that unquestionably undermines Hong Kong’s autonomy. This will threaten Hong Kong as a global financial hub and is already impacting the HK$ peg which may break in June.

This, from Armstrong, who in the past has been largely in the tank for China.

A US response was hinted at by a spokesman at the State Department:

https://edition.cnn.com/2020/05/21/asia/hong-kong-npc-article-23-intl-hnk/index.html
“… the State Department was delaying its submission to Congress of the annual Hong Kong Policy Act Report in order “to account for any additional actions that Beijing may be contemplating in the run-up to and during the National People’s Congress that would further undermine Hong Kong’s high degree of autonomy.”

Could Trump respond to the clampdown by Beijing by finding that Hong Kong is no longer “sufficiently autonomous” and withdrawing the MFN status from the nominally self-governed city? That response by the US could be the act that ends up snapping the peg, as this would make Hong Kong (de facto) just like any other city in China.

The reaction to this could include capital flight, refugees (protesters are all on video…possibly subject to prosecution under the new law for “sedition”), and quite possibly a banking crisis. Hong Kong has the most leveraged real estate market in the world. Real GDP dropped more than 10% (annualized) in Q1 2020, a horrific drop given the debt overhang. What happens when your income plunges (catastrophically, in many sectors) and your debt remains the same? Defaults are baked into the cake.

Kyle Bass, a CPD founding member, had (roughly) to say about the overall situation – both in the US, and Asia: “If we get a vaccine by year’s end, then the current US valuations actually make a lot of sense. If we don’t, the market is way ahead of itself.” Asked about his positioning: “looking at the crucibles around the world and their interactions with China, and the leverage in the Southeast Asian banking system – call it long the US, and short Southeast Asia.”

This is yet another thing that will happen in June.

I’m guessing such an event would be incredibly gold-positive, and the probability of such a thing happening is definitely non-zero.

Any gold correction should probably be treated as a buying opportunity.

I got a subscription to RealVision last week and during a Kyle Bass interview he was talking about playing the HK dollar as he thinks it has to lose its peg to the USD.

Here are some Raoul Pal’s Global Macro Investor charts that I pilfered: 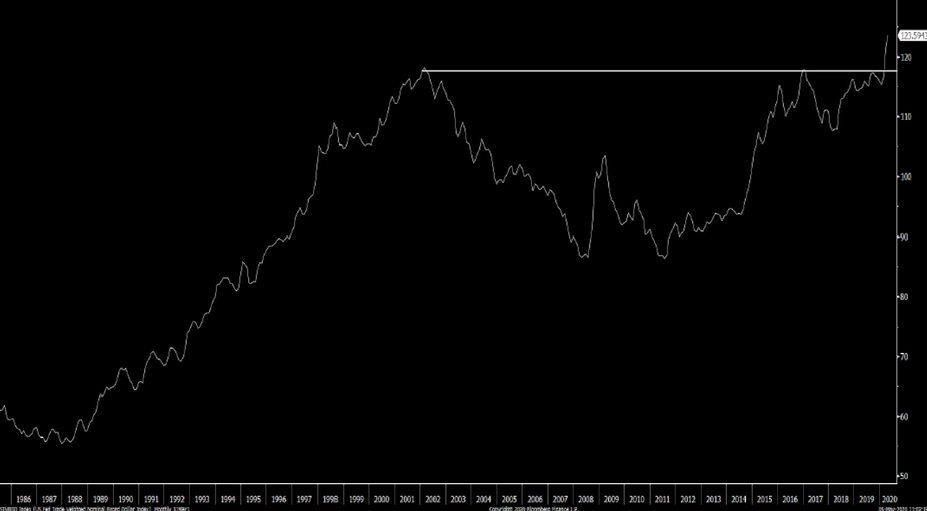 And to combat the theory that all the money printing by the FED means the dollar is doomed, this graph shows that when you compare central bank’s balance sheet expansions to the % of FX trade volume, the FED’s actions are looking pretty weak in comparison to the ECB and BOJ. 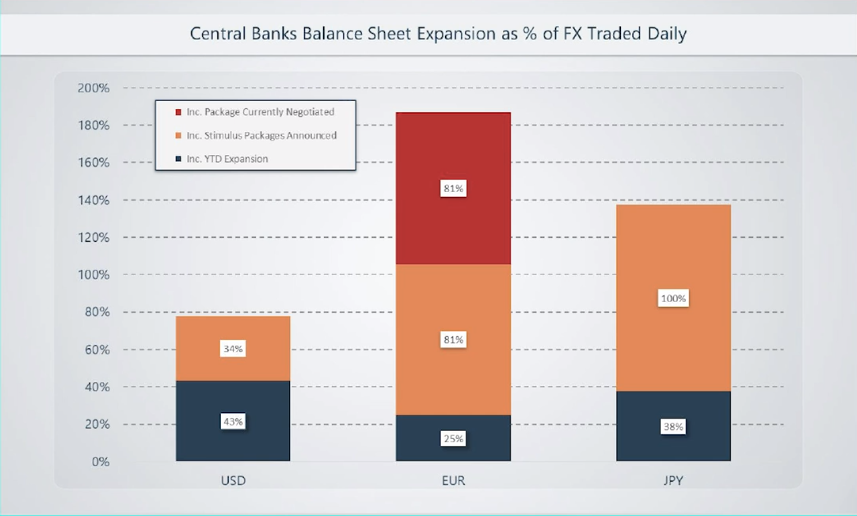 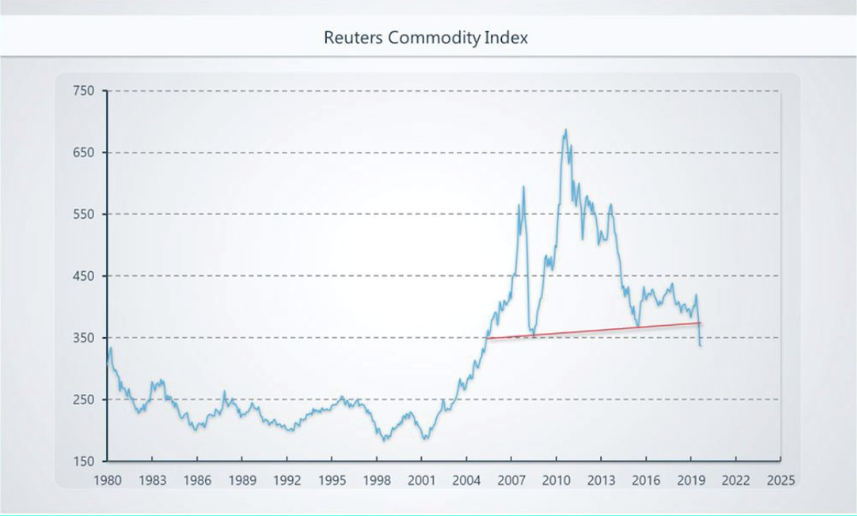 I have never agreed with anyone more than this guy, which probably means we are both wrong. He did really well in the crash, which I’m sure dictates that he is doomed to fail now.

But I love it.

Bonus: From Sentimentrader.com, over the last 3 days the traders in the options market are closing their put options at a rate not seen since 2002. That can’t be good for this bull run.