The doji candle was a bullish continuation, forecaster climbed, but remains in a downtrend. Gold is in an uptrend in the weekly and monthly timeframes.

Gold spiked higher in Asia, then just chopped sideways through end of day. The doji candle was a bullish continuation, forecaster climbed, but remains in a downtrend. Gold is in an uptrend in the weekly and monthly timeframes.

While the candle looked neutral – a bullish continuation – gold felt a bit tired to me. I couldn’t put my finger on why, but it seemed to me that PM may have topped out for now. Both weekly and monthly trends are fairly weak. 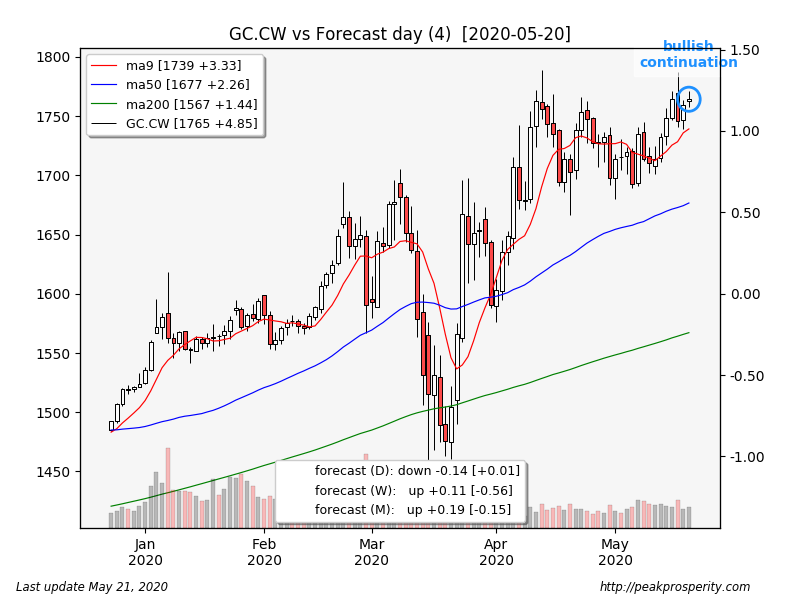 Silver also jumped higher in Asia – moving up more than gold. The short white candle was a bullish continuation, forecaster dropped, but remains in an uptrend. Silver is in an uptrend in all three timeframes.

Silver looked more bullish than gold, but it too felt a bit feeble in some way. It was another new high for silver. The shorts continue to pile in. RSI-7 for silver is now 89. Unlike gold, the trends for silver remain quite strong. 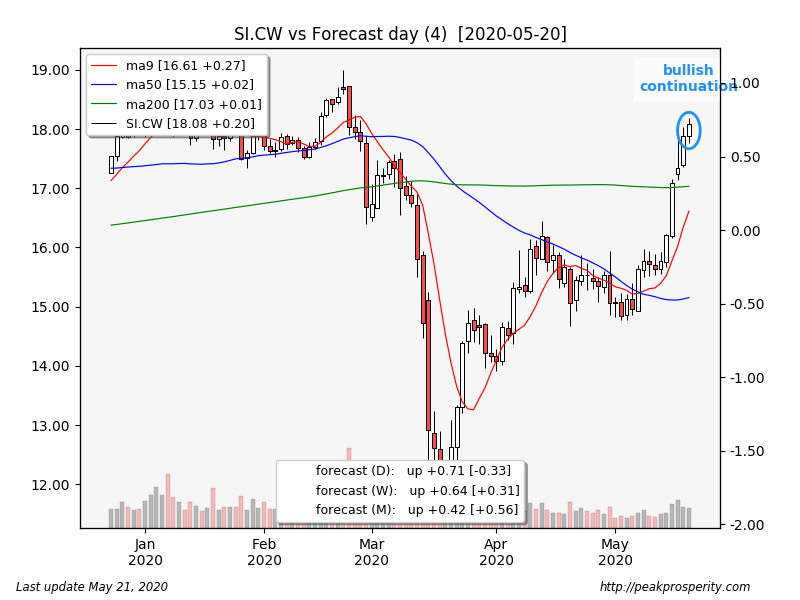 Perhaps the miners were my tell. Selling pressure hit the mining shares today. The candle pattern wasn’t very strong, but it was bearish, and the forecaster wasn’t pleased either. No reversal yet though. 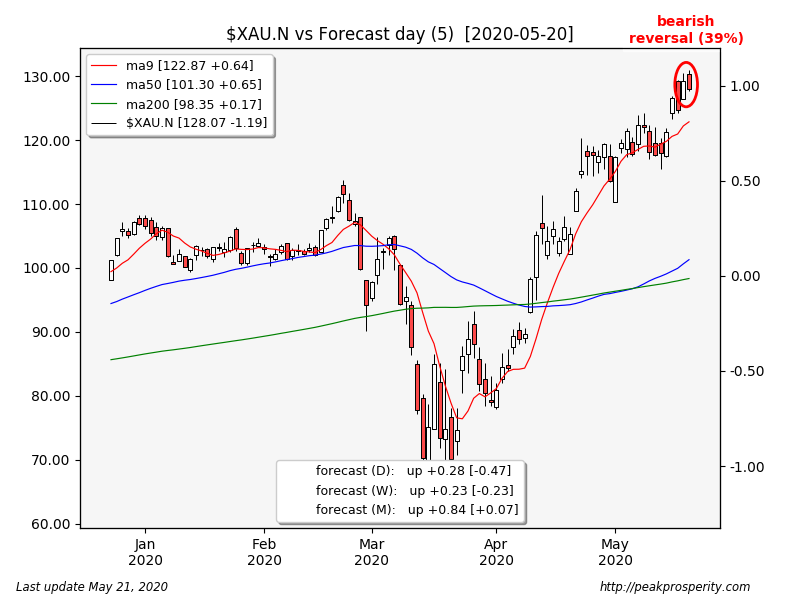 Copper shot up +0.05 [+2.08%] to 2.45 on moderate volume. The long white candle was a bullish continuation, forecaster climbed, moving higher into its uptrend. Copper is in an uptrend in all three timeframes.

That’s a new 2-month high for copper; the slow recovery continues. At this rate, a test of the 200 MA is perhaps another week in the future. Copper’s short term uptrend is looking reasonably strong at this point. 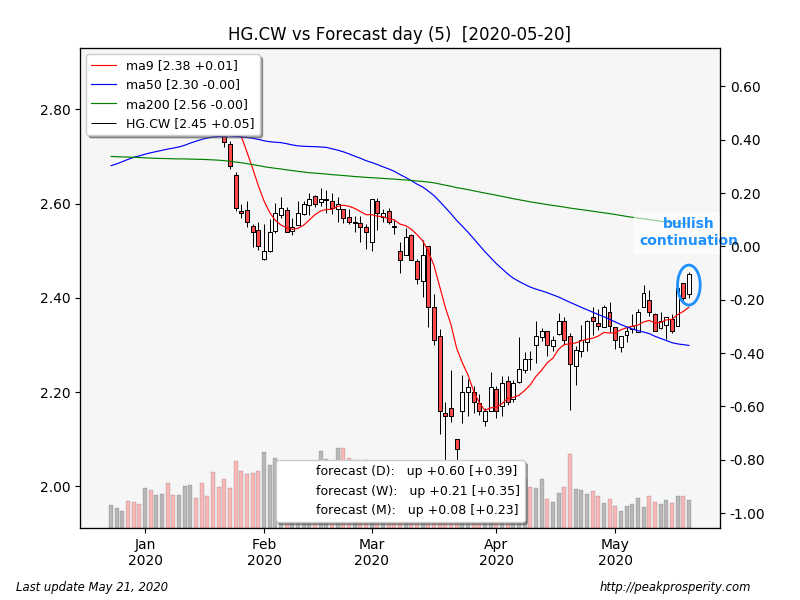 The buck dropped -0.23 [-0.23%] to 99.13 on moderate volume. The opening black marubozu candle was a bearish continuation, forecaster dropped, moving deeper into its downtrend. The buck is in a downtrend in both the daily and weekly timeframes, and has dropped into a state of no-trend on the monthly.

This is the third day of decline for the buck. It is nearing support. AUD alongside copper are together suggesting positive developments in China. 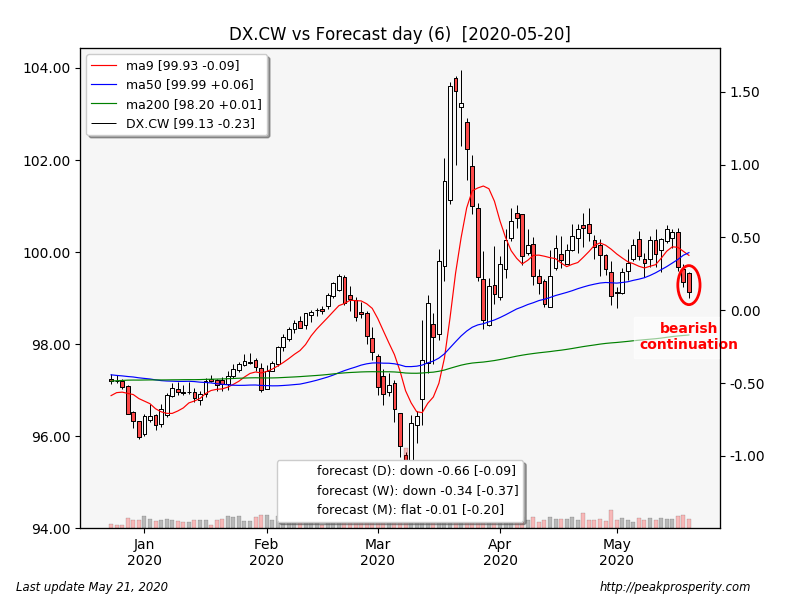 Crude screamed higher +1.67 [+5.23%] to 33.58 on moderately light volume. The long white candle was a bullish continuation, forecaster climbed, moving higher into its uptrend. Crude is in an uptrend in all three timeframes.

Crude has now closed above the April high; the crude uptrend continues to be very strong. 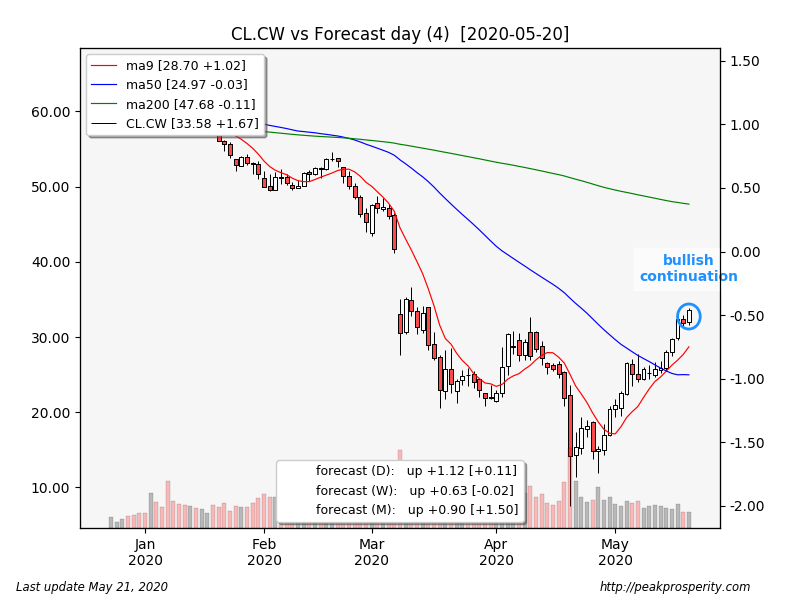 SPX rallied +48.67 [+1.67%] to 2971.61 on moderate volume. The opening white marubozu candle was a bullish continuation, forecaster climbed, moving higher into its uptrend. SPX is in an uptrend in all three timeframes.

Today’s new high in SPX invalidates yesterday’s bearish reversal pattern; the 200 MA is just ahead. The uptrend for SPX is starting to look reasonably strong at this point. NYSE Advance ratio is confirming the rally. Is it hundreds of billions a week in money printing? Something else? I don’t know. 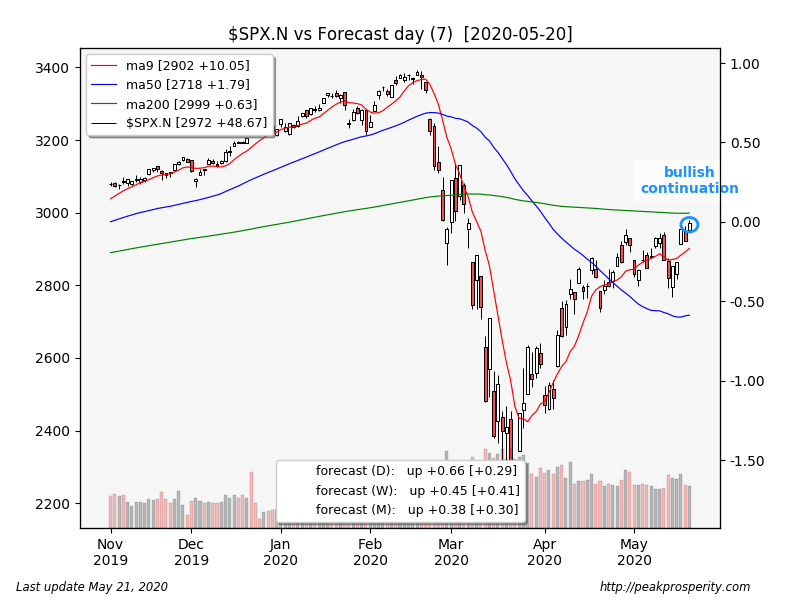 TLT climbed +0.30%. The long white candle was a bullish continuation, forecaster climbed, but remains in a downtrend. TLT is in a downtrend in both the daily and weekly timeframes. The 30-Year yield was unchanged at +0.0 bp to +1.43%.

TY was mostly unchanged, down -0.01%. The doji candle was a bullish continuation, forecaster dropped, moving deeper into its downtrend. TY is in an uptrend in the weekly and monthly timeframes. The 10-Year yield was unchanged at +0.0 bp to +0.70%. 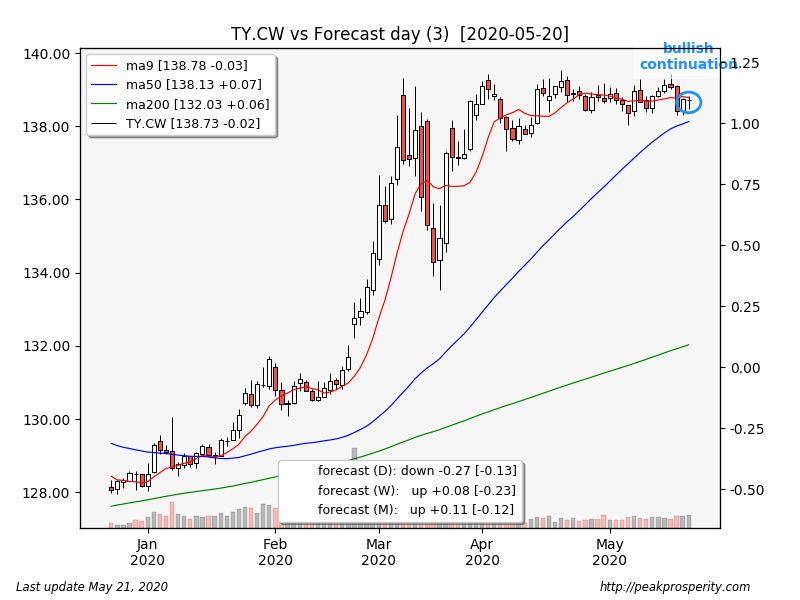 JNK rallied +1.09%. The long white candle was a bullish continuation, forecaster climbed, moving higher into its uptrend. JNK is in an uptrend in the daily and weekly timeframes.

Crappy debt’s move supports the risk on move in equities; the uptrend is now reasonably strong. 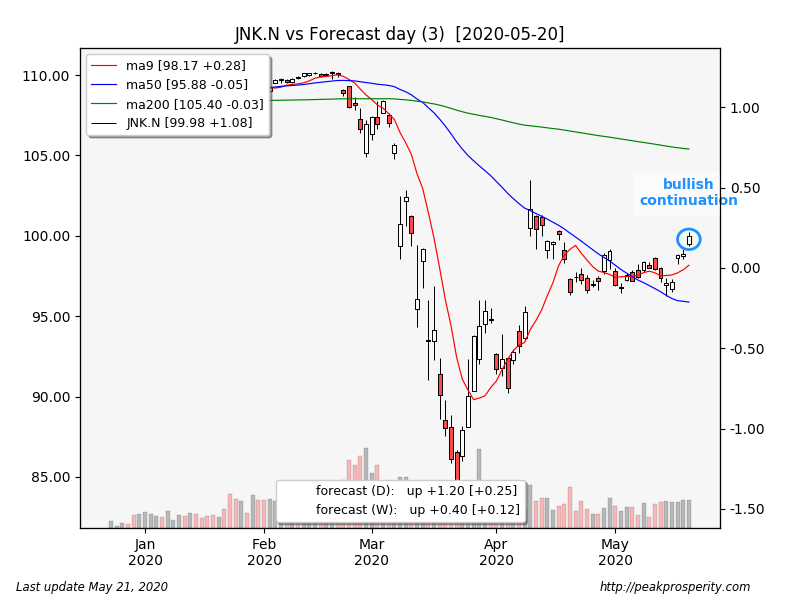 The physical ETFs are mixed, and BV has moved back into premium. Shortages remain in big bar silver.

Today it felt to me that PM started to weaken; gold/Euros tipped over into a downtrend, gold/USD is already in one, while the miners and silver both weakened somewhat. Silver is at nosebleed RSI levels, shorts are piling in, betting on a decline. Maybe it was that high RSI combined with selling pressure in the miners. Its hard to say.

Oil continued its run, well past 30 at this point. It appears as though this helped spur a move higher in equities overall – XLE was the leading sector, up almost 4%.

The US and Europe continue to reopen, cases are falling, and it does seem as though a medical götterdämmerung will be avoided – for now, at least. My “tell” is Georgia. They opened early, and there was a lot of fuss and bother from “the sky is falling” Team Blue media. I was worried for sure. And yet, miraculously, nothing happened. Georgia opened up, and cases dropped. It turns out, SC2 really is a respiratory illness, and such things are reputed not to like warmer weather, and sure enough, that’s what happened.

Perhaps someday my home state of California will get the memo.

I think we are in the process of a transition from a medical story to an economic story. I might be a little early in this – but I’m usually a little early with things.

I do think a positive treatment regime – if it comes relatively soon – has the potential to trigger a strong move higher in risk assets. I was kind of hoping they’d sell off first, so I’d have a chance to trade the lows, but … given the rebound in crude, that might not happen.

Gold is probably the place longer term, but it may well correct in the near term.

Thanks for the correction about the confirmed cases in Tejas yesterday. I’ve been (mistakingly) looking at testing numbers the last week, which are going up. That’s a good thing. It was a stupid mistake, but in my defense, I think they changed the colors on the graph I was looking at.

Anyways, that’s a big relief for the time being.

Hey I’m pondering about buying long-term ITM call options on natural gas and gasoline ETFs. My home electricity charges are pinned to natural gas prices and my heating is also natural gas, so I’m looking to hedge any rise in my personal utilities and gasoline expenses over the next year to year and a half.

If we get more deflation then I will probably lose the premium on these call options, but maybe the savings in gasoline and utilities will offset it.

If we get inflation, then vice-versa.

What do you think? What am I not considering?

If you own your own home, hedging electricity prices is pretty easy with solar panels.  I did that for my mom.  She was so frugal, she ended up zeroing out her bill for at least half the year.  A $180/month bill dropped to (worst case – December) maybe $40.  Totally worthwhile.  Summer was free.  Texas should be the same as San Diego in terms of insolation.

Maybe buying equity in a natgas producer?  Or options on said equity?

Problem is, the one I’d look at: DVN, has more than doubled off the March lows.

I’d say – pick up a few shares of DVN during the next re-test of the lows.  Let’s assume that such a move will probably occur.  But now may not be the right time.

Glad you were looking at the wrong number for Texas.  There are still plenty of variables you can control.  And – getting more fit is a good idea anyway.  Lots of benefits to that one.  Sometimes people just need a little motivation.  The local gym just opened up here for the first time in many weeks.  I did weights now – twice – for the first time in 2 months.  I am very sore now.  🙂  But it is good to be back.  I know I will have my old body back in about 2 weeks.  I am so excited!

“This is a perfect environment for gold to take center stage. Fanatical debasement of money by all of the world’s central banks, super-low interest rates and gold mine operation and extraction issues should create a fertile ground for this most basic of all money and stores of value to reach its fair value, which we believe is literally multiples of its current price. In recent months, gold has gone up in price to some degree, but we think that it is one of the most undervalued investable assets existing today. . . . [It] is the answer to the question: Is there an asset or asset class which is undervalued, underowned, would preserve its value in a severe inflation, and is not adversely affected by Covid-19 or the destruction of business value that is being caused by the virus?”