Gold mostly just chopped sideways today. The doji candle was a bearish continuation, and forecaster fell, but remains in an uptrend. Gold is still in an uptrend in all three timeframes.

Gold/euros climbed +5.29 [+0.34%] to 1545.65 on light volume. The doji candle was unrated, but forecaster climbed, moving higher into its uptrend. Gold/euros is in an uptrend in the daily and weekly timeframes. 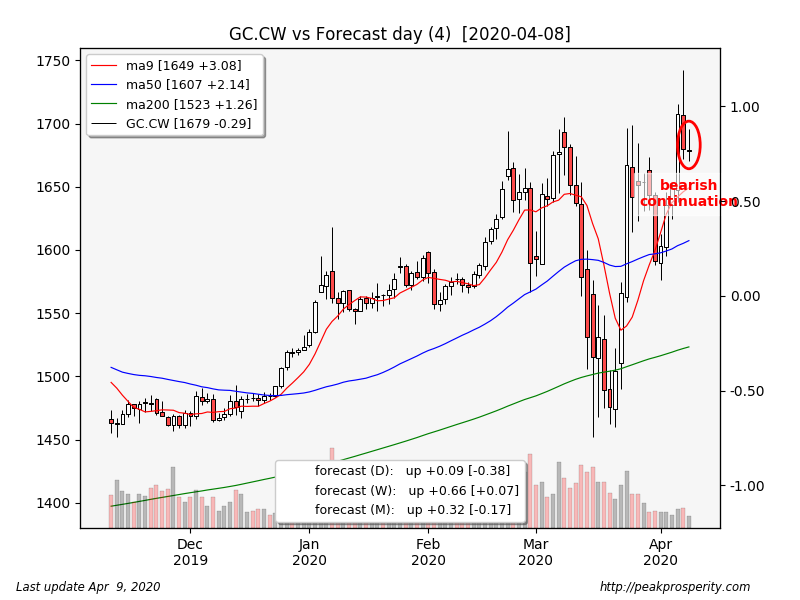 Silver chopped sideways with a slight lower bias. The short black candle was a bullish continuation, forecaster dropped, but remains in an uptrend. Silver is in an uptrend in the daily and weekly timeframes.

COMEX SI open interest fell -137 contracts. Current open interest for SI: 80% of global annual production, down -0.08% today. Silver OI has chopped sideways now since the end of March. To me, this suggests we’ve seen the low in silver – deleveraging in the silver space is probably now complete. 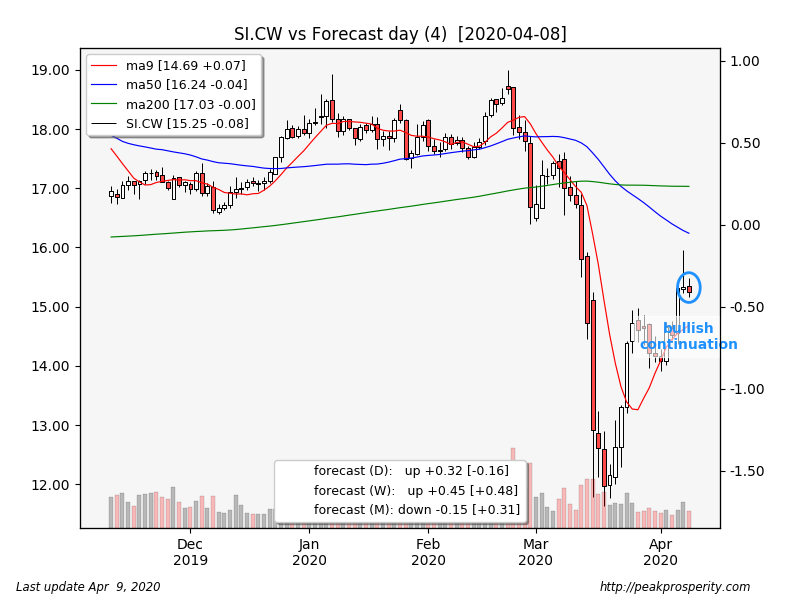 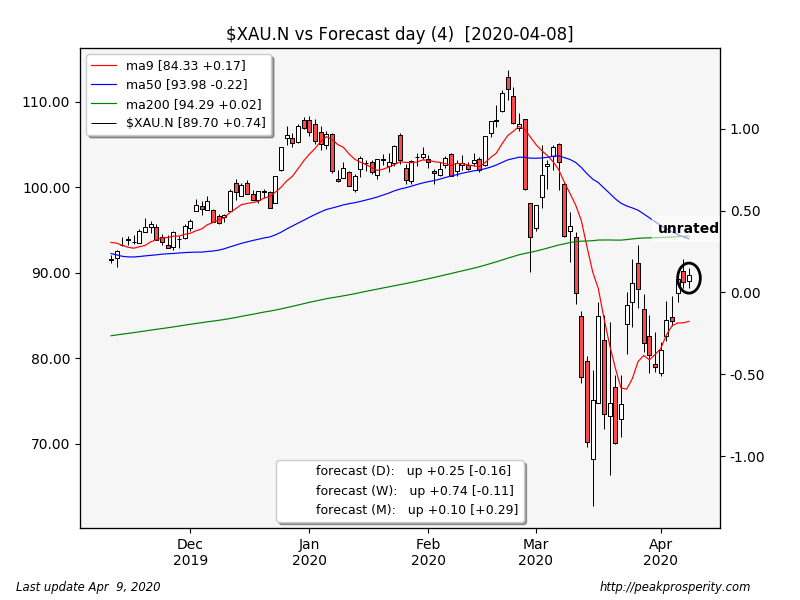 Copper rose +0.02 [+0.89%] to 2.27 on moderate volume. The short white/NR7 candle was unrated, forecaster dropped, but remains in a very slight uptrend. Copper is in a downtrend in both the weekly and monthly timeframes. Copper continues to move slowly higher. 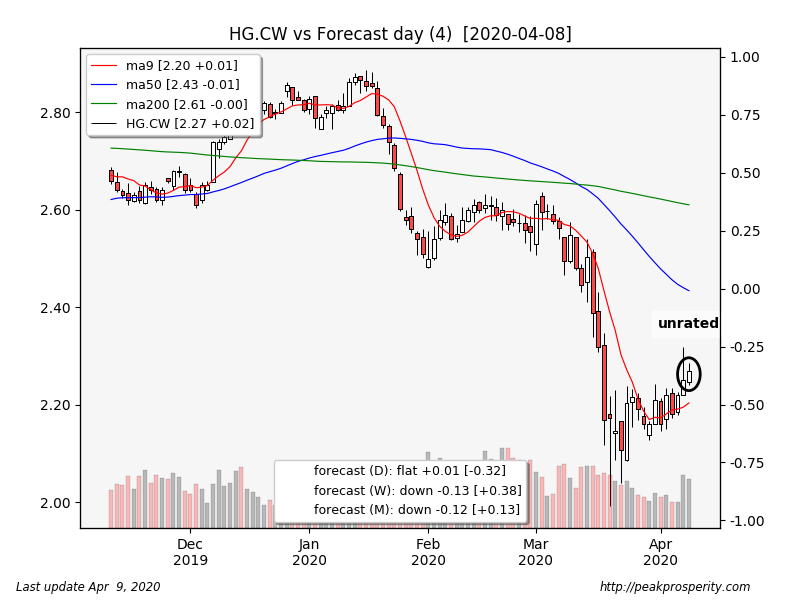 The buck climbed +0.25 [+0.25%] to 100.16 on light volume. The bullish harami candle was a bearish continuation, forecaster dropped, moving down into a state of no-trend. The buck is in an uptrend in just the monthly timeframe. 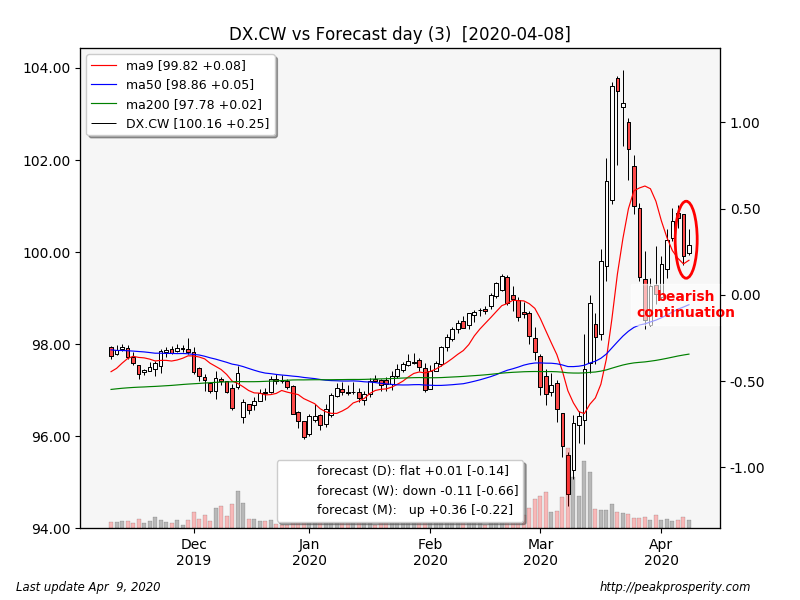 Crude jumped higher +1.59 [+5.33%] to 31.44 on moderate volume. The white marubozu candle was unrated, and forecaster fell, but remains in a slight uptrend. Crude is in an uptrend in the daily and weekly timeframes.

The big move in crude came just before the futures pit close; OPEC+ is meeting tomorrow, and it looked to me as though traders were placing their bets on a positive outcome. Of course, if no agreement is reached, the reversal off the recent “highs” of 30 (!) could be pretty dramatic.

EIA report was horribly bearish, but pretty much nobody cared. 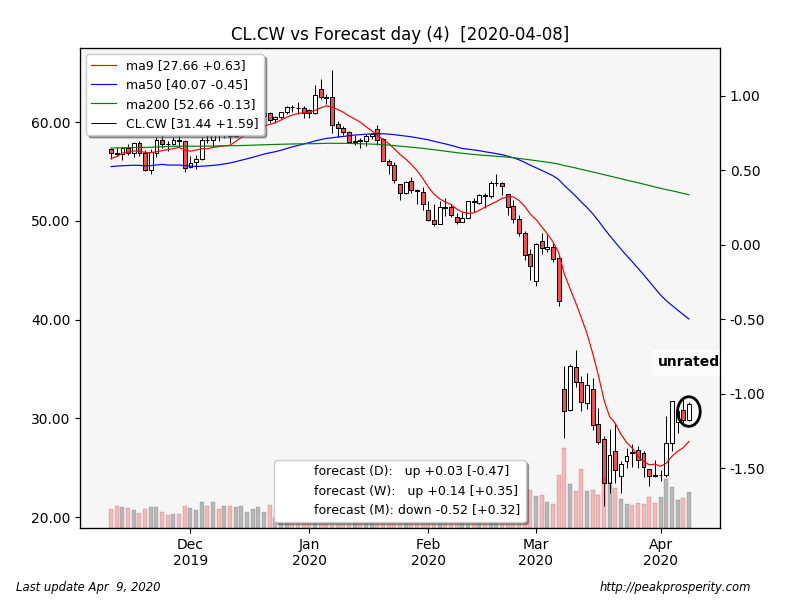 SPX rallied strongly today, up +90.57 [+3.41%] to 2749.98 on moderately light volume. Most of the gains happened during regular trading hours. The long white candle was a bullish continuation, forecaster climbed, moving higher into its uptrend. SPX is in an uptrend in the daily and weekly timeframes.

Equities have retraced perhaps half their losses in the recent correction at this point. 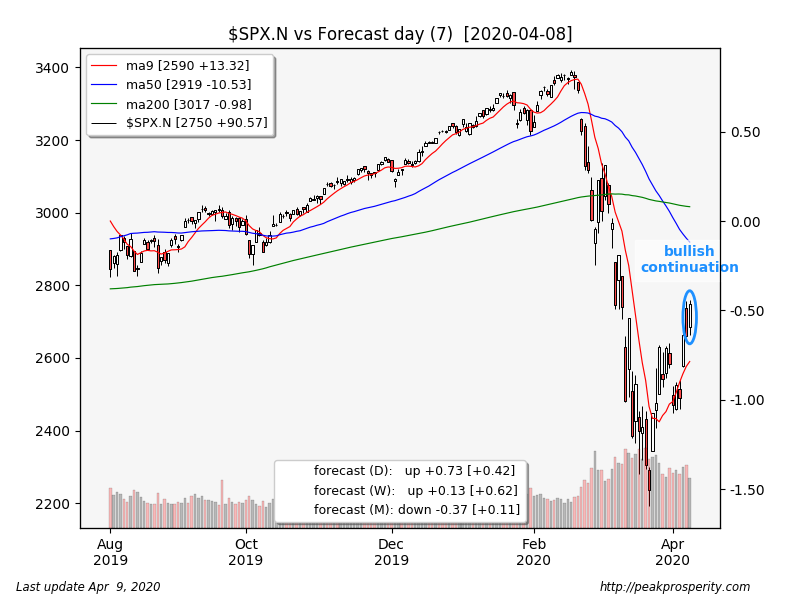 TLT fell -0.73%. The doji candle was unrated, but forecaster dropped, falling deeper into its downtrend. TLT is in an uptrend in the weekly timeframe. The 30-Year yield rose +2.0 bp to +1.34%.

TY dropped -0.21%. The short black candle was unrated, forecaster dropped, moving deeper into its downtrend. TY is in an uptrend in the weekly and monthly timeframes. The 10-Year yield fell -1.0 bp to +0.74%.

Bonds continue to slowly retreat off the highs. 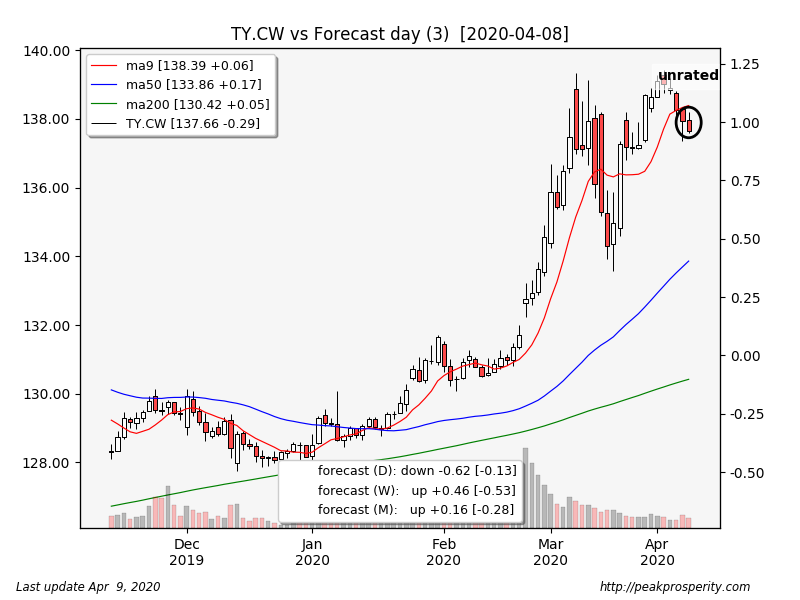 JNK shot up +2.29%. The opening white marubozu candle was a bullish continuation, forecaster climbed, moving higher into its uptrend. JNK is in an uptrend in the daily and weekly timeframes. Unlike SPX, however, JNK did not make a new high for this rebound. Crappy debt is not performing as well as equities right now. 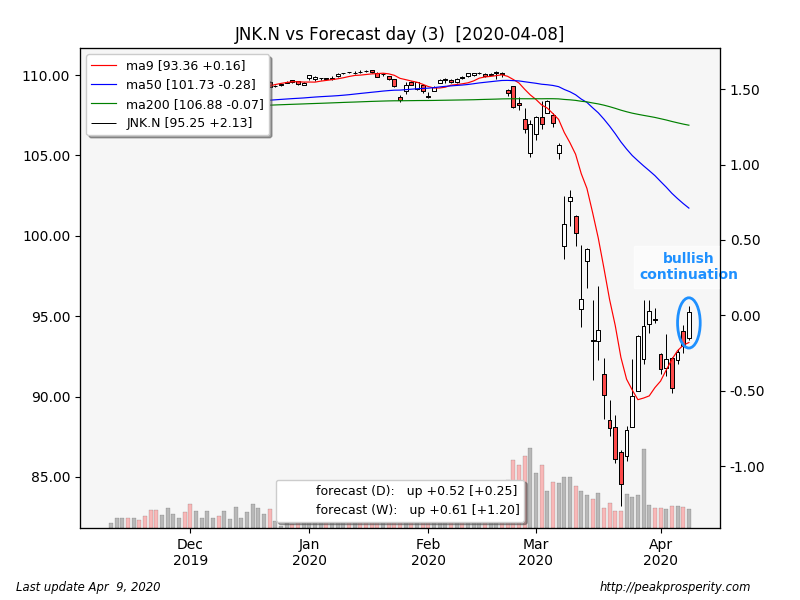 Large gold bars are gone. Cheapest 1oz bar had a 4.61% premium. 100 oz silver bar premium is 19.16%. There are clear shortages in physical PM right now; premiums at BV remain, and PSLV is also in premium.

ISM Mfg Index: headline 49.1, prior 50.1. That’s slightly recessionary, but really not much change.

Gold and silver didn’t do much today; given the dollar rally, that’s somewhat positive. Silver OI may be indicating that the deleveraging phase of this correction may be past, and that the low for silver may well be in. My PSLV trade – picked up near the lows – up +23%!

Equities hit a new post-crash high; leading sector was energy, which is a bet on an agreement from OPEC+ to reduce production. My guess is, it will happen, and most likely it will include US shale, at least at some level. Was this the plan? Either destroy shale, or force it to start limiting production? Sure seems like it.

Will this come together by tomorrow? Hmm, I’m less sure about that. With Trump, there is often a lot of back and forth, so it is entirely possible things could take a bit longer to get sorted out.

Bonds continue to weaken, although given the rally in equities, the bond decline is quite small. I’m guessing the Fed is helping by shoveling in truckloads of new money, though we won’t know exactly how much until the latest balance sheet is released tomorrow.

Latest from the CDC: R0 for the virus may be 5.7. Paradoxically, I think this is good news, since it suggests there are a lot more cases out there than we realize. It means the denominator is larger, and thus the CFR is smaller.

Combine this with a reasonably effective treatment (0.46% fatality rate vs 1.2% fatality rate, per comparison from Roult’s hospital, vs others not using his regimen) and it says things are really not as bad as – say – Wuhan looked back in January. It isn’t a happy experience, but as testing ramps up and treatment starts earlier, predictions of “never getting back to normal” seem – well they seem misguided to me.

I do not believe the US will end up having “the Wuhan experience.” I continue to think this will end sooner rather than later. Certainly whhat happened first in Wuhan, and then in Italy, was shocking, but now that we have a treatment that seems to work especially when started early, and we have a testing regime ramping up (as they have in South Korea, Singapore, Taiwan, and Hong Kong – none of which has had “the Wuhan experience” – or even the NYC experience), and the US has finally figured out that wearing masks is a good idea, I think we will end up being ok.

This suggests that some risk assets – currently at near-extinction level event prices – may be good value at this point. (FWIW, I think that other risk assets will end up at or near zero, and that is likely to include a reasonable amount of crappy debt).

Distinguishing between “good value” and “about to die” is the trick here.

Here’s an example of what I mean.  I thought this sector was “good value” several years ago.  All it has done is drop.  Is it good value now? 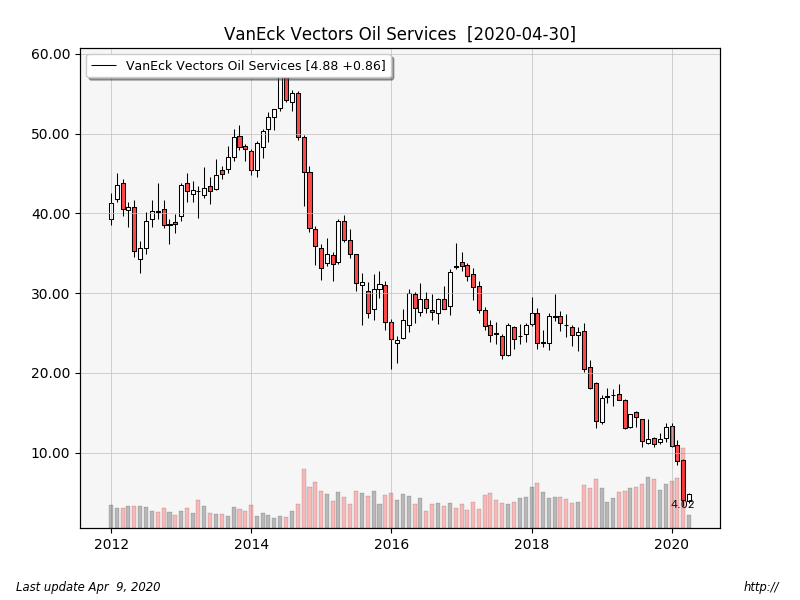 Aussie Update:  It is the “end” of the week for us leading into a 4-day break for Easter.

– PM:  Due to the rising strength of the AUD, PMs struggled with Gold down 1.3% though silver looked better finishing up 1.5%

On the Physical Market:

– Equities are “brave” finishing today’s session at the top with a 4-day weekend coming, though they are lower than the highs of the week

– Trading Vols seems oddly light across all the markets during the rally.  Where is all the $$$ flowing?

– While we are well into the curve for EU and now the US, the curve is still building in India, Africa, Africa, and Central America.

– Unemployment is rocketing and tends to slowly recover

The longer this Bull Run goes, the more I’m thinking about shorting it again.

One reason I bailed on the short positions was a fear that shorts could be suspended in the US/AU as some exchanges in EU announced bans at that time.

Don’t know if any of you long time candlestick traders have noticed the gigantic long term cup (8 years) that has been formed in the Gold market. Always need confirmation, but after a pullback handle once we reach 1780 or so, it suggests a movement upwards beyond belief, albeit it is a long term movement.

Fed announced today it was going to print an additional 2.3 trillion, and it would also start buying “debt of fallen angels.”

Unbelievable! Put options on HYG will be the next “lone wolf trade”…I love it.

There are rumors of a debt jubilee coming in Japan this winter. Their central bank already owns their bond market, why not just hit the reset button and forgive all debt?

When there is nothing left for a central bank to buy what do they do?

You’re not seeing things.  And I suspect large institutional players are taking notice too!