Gold spiked to a new 8-year (1742.60) in Asia, but then fell for the remainder of the day. The spinning top candle was a possible bearish reversal (37%), but forecaster climbed, remaining in an uptrend. Gold is in an uptrend in all three timeframes.

Gold/euros plunged -29.37 [-1.87%] to 1540.36 on moderately light volume. The spinning top candle was a possible bearish reversal (38%), forecaster climbed, moving higher into its uptrend. Gold/euros is in an uptrend in the daily and weekly timeframes. 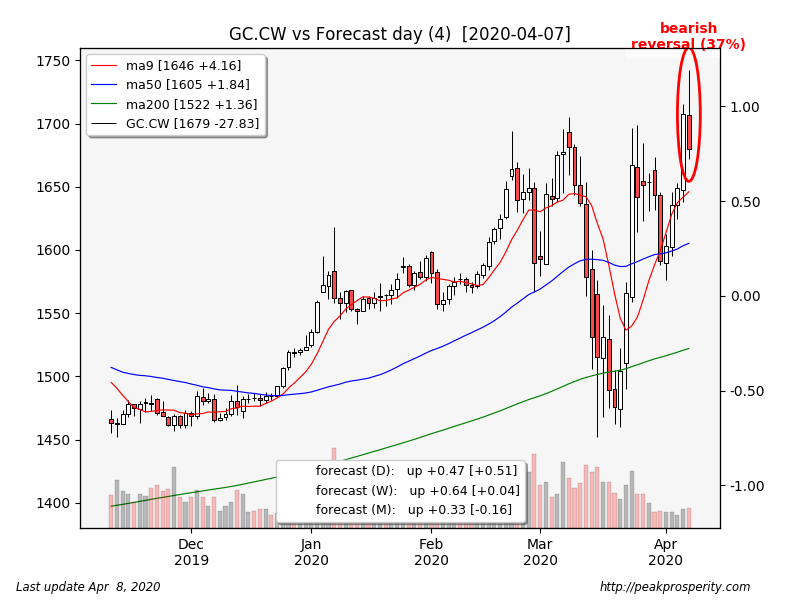 Silver had a similar intraday pattern to gold; it spiked in Asia (new high: 15.93), but then moved lower during the US trading session, losing almost all its gains by end of day. The doji candle was a possible bearish reversal (39%), but forecaster climbed, moving higher into its uptrend. Silver is in an uptrend in the daily and weekly timeframes. The doji candle had a high bearish rating – unusual for the usually useless doji.

The gold/silver ratio dropped -1.89 to 109.55. That’s bullish. The GSR continues to slowly move lower off its all time high. 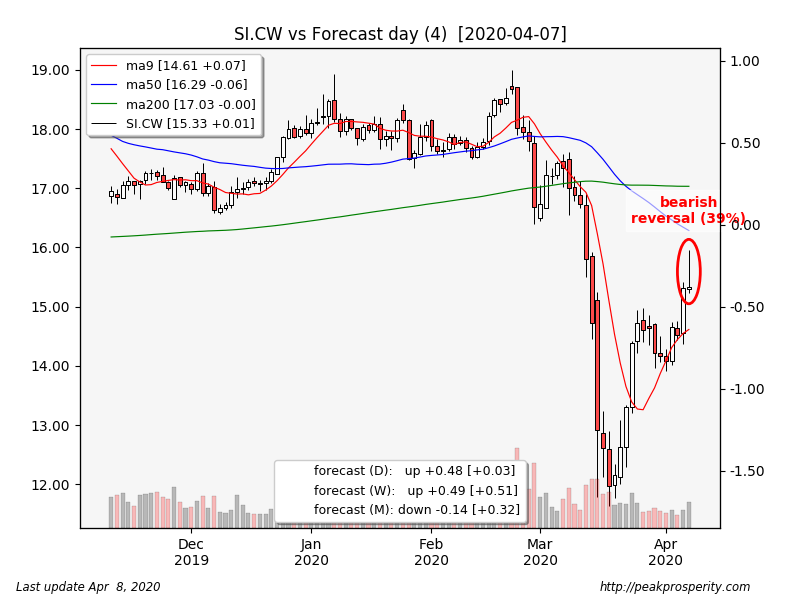 Miners opened up, then sold off for most of the day. GDX dropped -0.95% on light volume, and GDXJ fell -2.12% on light volume. XAU moved down -0.40%, the short black candle was a bullish continuation, forecaster dropped, but remains in an uptrend. XAU is still in an uptrend in all three timeframes. 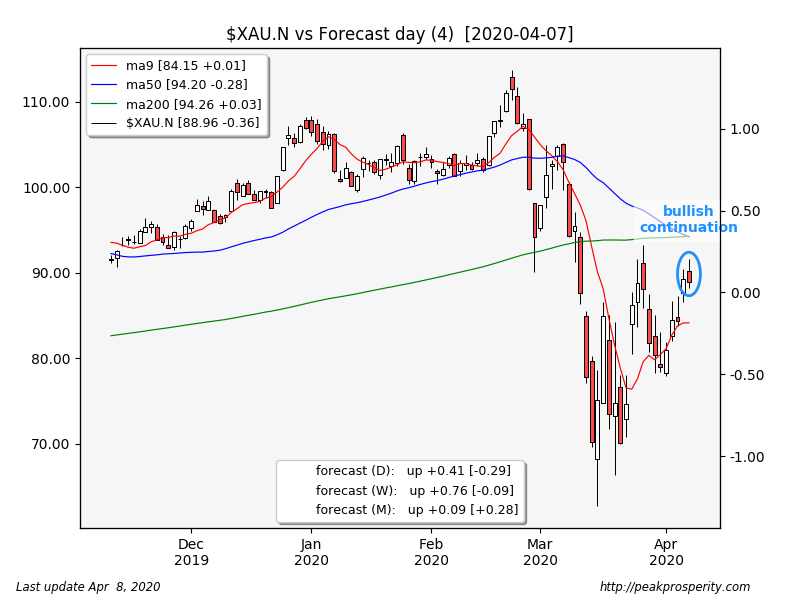 Copper shot up +0.03 [+1.35%] to 2.25 on moderately heavy volume. The shooting star candle was a bullish continuation, forecaster climbed, moving higher into its uptrend. Copper is in a downtrend in both the weekly and monthly timeframes. Copper rallied strongly in Asia and early London trading, but then sold off for most of the rest of the trading day. Candle code doesn’t pick this as a top, and neither does the forecaster, although the candle does look a bit unpleasant. 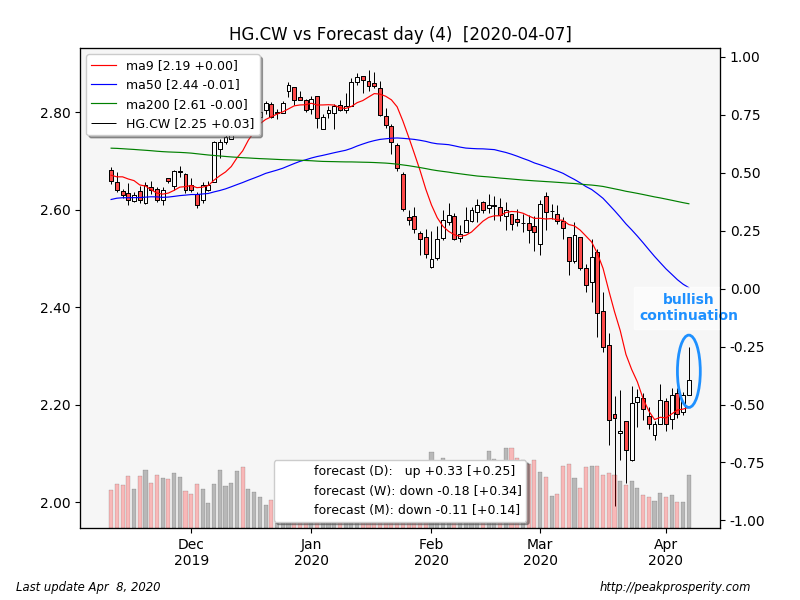 The buck plunged -0.84 [-0.83%] to 99.91 on light volume. The swing high candle was a likely bearish reversal (62%), forecaster dropped, but remains in an uptrend. The buck is in an uptrend in the daily and monthly timeframes.

Is this a secondary top for the buck? Maybe. It was an ugly candle today for sure. If things do start to turn around, I’d expect money to start flowing to the emerging markets. 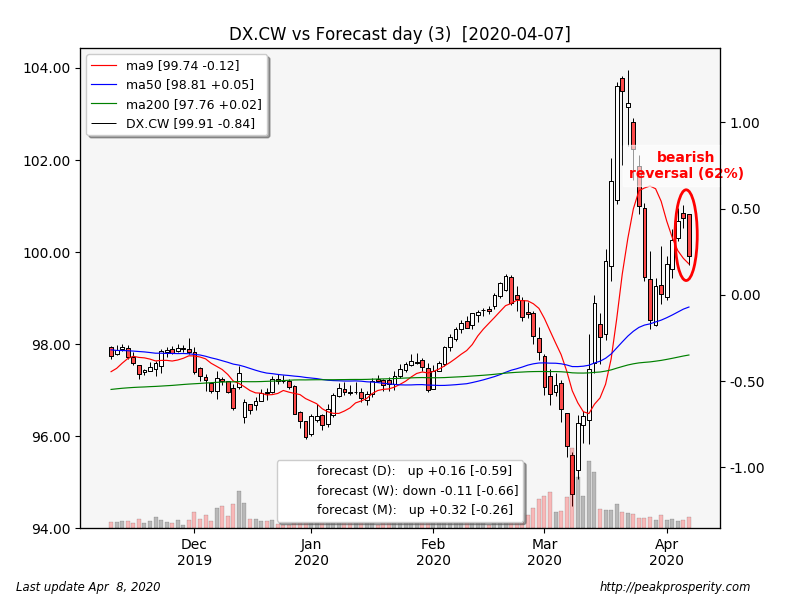 Crude fell -0.87 [-2.83%] to 29.85 on moderate volume. The long black candle was a bullish continuation, forecaster dropped, but remains in an uptrend. Crude is in an uptrend in the daily and weekly timeframes, but that weekly uptrend is fairly fragile.

Most of the damage in crude today happened in the afternoon in the US; the market appears concerned that Russia and Saudi Arabia expects the US to curtail production too, and Trump has said “he hasn’t been asked” about the issue. Russia said it would cut 1 mbpd, as long as the US did so as well. It appears as though negotiations-via-Tweet are already under way. 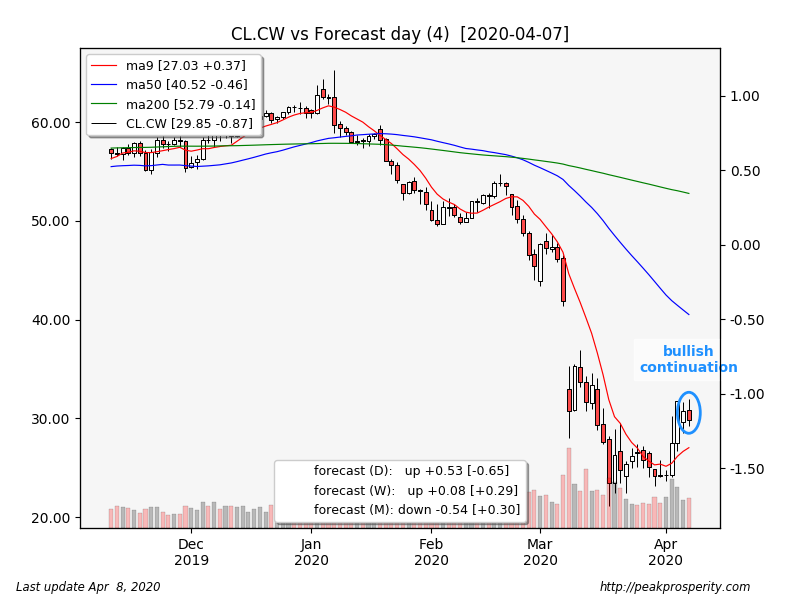 SPX moved down -4.27 [-0.16%] to 2659.41 on moderate volume. SPX rallied hard in the futures markets overnight, but the selling started around 1pm, and it didn’t stop until the close, with all of the gains reversed by end of day. The closing black marubozu candle was a possible bearish reversal (35%), forecaster dropped, but remains in an uptrend. SPX is still in an uptrend in the daily and weekly timeframes. 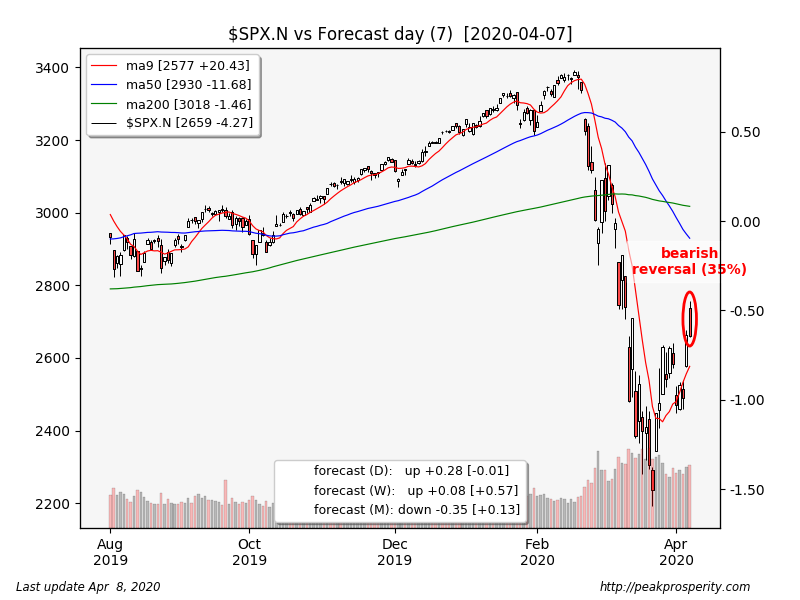 TLT fell -1.05%. The closing white marubozu candle was a reasonably strong bullish reversal (42%), but forecaster fell, dropping into a downtrend. TLT is in an uptrend in the weekly timeframe. The 30-Year yield rose +5.0 bp to +1.32%. TLT is now below the 9 MA.

TY dropped -0.22%. The spinning top candle was a bearish continuation, and forecaster fell, dropping into a downtrend. TY is in an uptrend in the weekly and monthly timeframes. The 10-Year yield rose +6.0 bp to +0.73%. TY has also fallen below its 9 MA.

Bonds are finally starting to correct. Is that even possible with half a trillion per week spent by the Fed? It looks as though we’ll find
out soon enough. 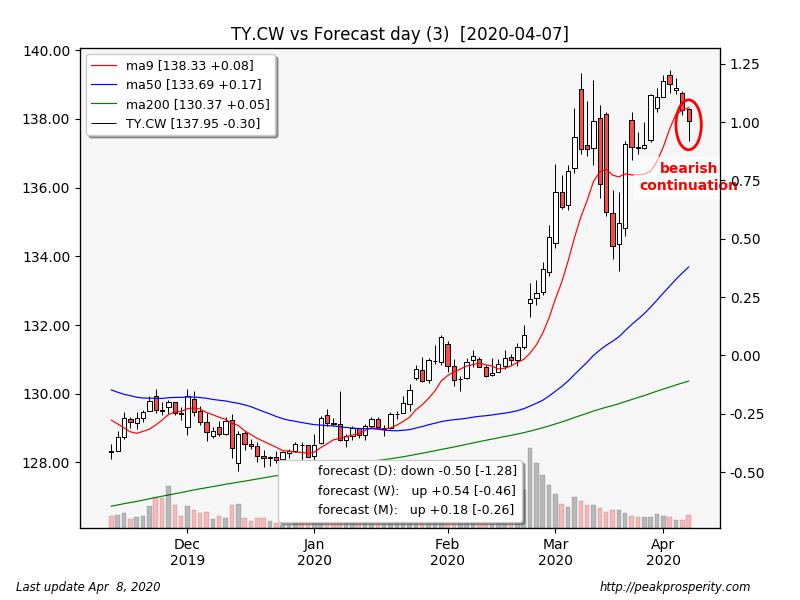 JNK rallied +0.34%. The confirmed bullish nr7 candle was a probable bullish reversal (54%), forecaster climbed, rising into an uptrend. JNK is in an uptrend in the daily and weekly timeframes. 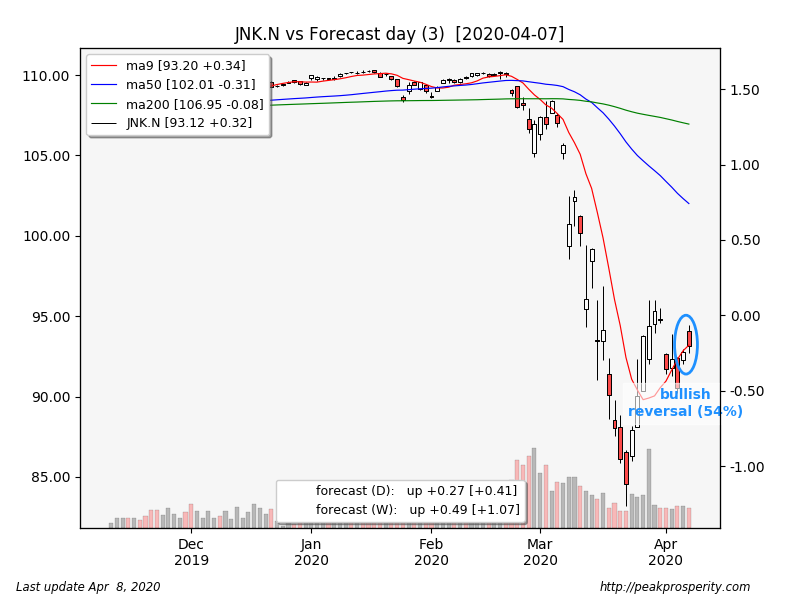 Large gold bars are gone. Cheapest 1oz bar had a 4.98% premium. 100 oz silver bar premium is 18.27%. There are clear shortages in physical PM right now, although the premium at BV has largely disappeared.

It looks like gold and silver ran into some selling pressure today. While the candle prints weren’t ideal, neither were they smoking-gun reversals, like the one we saw in the buck.

Likewise, equities saw a lot of selling pressure too, and crude was not happy after traders realized that the agreement to curtail oil production really wasn’t a done deal after all.

Bonds are starting to weaken a bit – although we don’t know yet just how much the Fed is spending propping up the bond market. Who knows, maybe its another $500 billion this week also. That kind of money will buy an awful lot of bonds.

Is there light at the end of the tunnel? Some countries in Europe are talking about relaxing their lockdowns. And Sweden doesn’t even have a lockdown. They are going ahead with “modified business as usual”, for the most part. Iceland too. Lots of experiments are being run worldwide. Which ones will succeed and which will fail? We should know soon enough.

Hospitalizations in NYC remain much lower than projected. HCQ treatment, or something else? If we were to really ramp up testing, and then start treating everyone rapidly with the HCQ treatment, how much would that affect the hospitalization rate? Perhaps we wouldn’t need a lockdown after all?

Armstrong argues the stimulus will not be inflationary:

Under the academic view, inflation should rise by simply increasing the money supply presuming we will just be like kids in high school and party spending the cash with no regard for what comes tomorrow. When people do not TRUST the future, they will NOT spend the money – they hoard it. This is why the European Central Bank is moving to eliminate cash for Quantitative Easing since 2008 and negative interest rates since 2014 have absolutely PROVEN beyond a shadow of doubt that the Quantity Theory of Money is bogus.

What has taken place here is $2.2 trillion is nothing. It will not create inflation because the destruction of Capital Formation is just getting started.

The loss to the economy will be close to $5-6 trillion in permanent damage so even $3 trillion will not be inflationary.

Why the Quantity Theory of Money will Fail ONCE Again

By definition, inflation is an expansion of the money supply.  Check.

Rising prices are an eventual symptom that manifests when mass *psychology* changes.  In all likelihood, it will take more $ printing than we have seen thus far to affect that mindset shift, but rest assured, a LOT more $ printing is coming.

At some point, likely soon, prices will begin to rise at an alarming pace.

Did you go long bitcoin?

As I watch the green numbers in the market these days I am more and more feeling like a sucker.

The Fed, Governments and elite to the common people…

If you refuse to participate in the markets, we’ll just steal what’s left of your future purchasing power and savings and drive up the market, ourselves.  We just don’t care if you participate or not.  Suckers!

When people are living paycheck to paycheck, I don’t think they will end up saving their stimulus check.

From my understanding of inflation – it is this.  If the Fed prints money and hands it to the banksters, then bankster-assets get the flow and they rise in price.

If the Fed prints money and hands it to people, then the things they buy rise in price.

Normally, people work, and spend.  They produce something, and they spend their wages.  So money flow and production are matched.

But now, money flow will remain the same (those paycheck-to-paycheck workers will end up spending their checks on food, rent, entertainment, the usual stuff) but fewer things will be produced in the overall economy.

There won’t be savings because – mostly people don’t have enough income to actually save.

The quicker and higher this Bear Market Bull Run goes, the harder I think the next fall will be.  The simple Q I keep asking is… how do we thing the economy looks going forward today compared to 3 June 2019 when the market was at the same value (S&P 500 @ 2,750)?

Even WSJ today says: https://www.wsj.com/articles/wsj-survey-coronavirus-to-cause-deep-u-s-contraction-13-unemployment-11586354400 (and I think they are being optimistic)

I was trying to think of something that would make me laugh.

You went long banks then?  Yup, you are a bankster. I knew it!

No? Not the banks?

It must be toilet paper manufactures? Money printing machines?

As I watch the green numbers in the market these days I am more and more feeling like a sucker.

Don’t worry brother, you will feel so much better when Wall Street is vomiting all those gains in another couple weeks.

As soon as there is legitimate good news on the virus front, “the worst is behind us, etc”, the rush for the exits in the markets will be back on again. This decline is not about the virus, it’s about that other exponential threat: debt.

In the end, Wall Street will be the suckers

Yeah.  Pick something even more nutty than bitcoin.  And the banks.  It’s a small position; short puts, long calls.  Already up – whoa – 95%.  Calls +95%, puts +35%.  The underlying was down 70% peak-to-trough at the trough two days ago.  Item has now crept back above the 9 MA.  Trade will probably blow up, but if this thing really does end by early summer, trade should do extremely well.

Position size is only a little bigger than my single TSLA put.  Which worked out pretty well.  Bought at $6.75, sold in the mid 60s, IIRC.

The majority of my position is energy-related.  That too is being priced for an ELE.