Gold moved sideways in Asia, then rallied strongly through end of day, breaking out to a new 8-year high. The long white candle was a bullish continuation, and forecaster jumped higher, moving into an uptrend. Gold is now in an uptrend in all three timeframes.

Gold/euros shot up +54.21 [+3.55%] to 1581.27 on light volume. The long white candle was a bullish continuation, and forecaster climbed, moving higher into its uptrend. Gold/euros remains in an uptrend in the daily and weekly timeframes. Today marked a new all time high for gold/Euros. 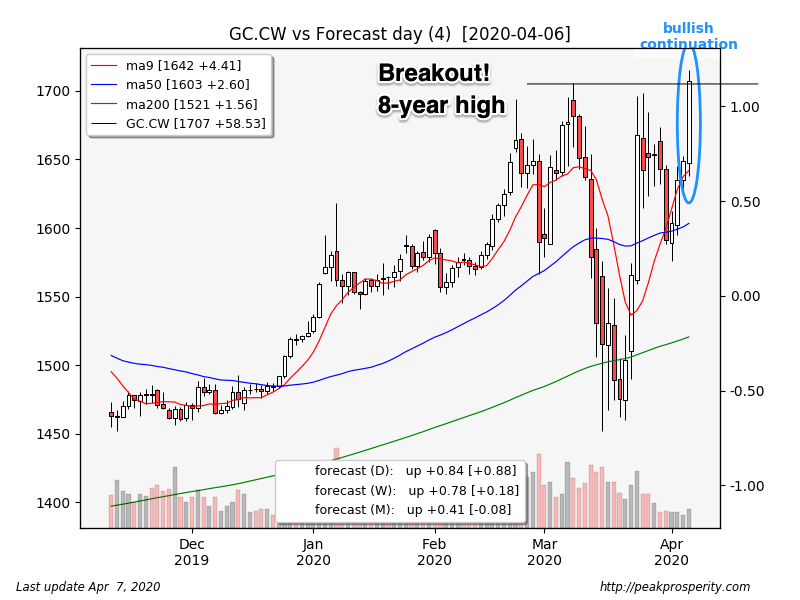 Silver started rallying around 1 am, and it didn’t stop until about 3:30 in the afternoon, breaking out to a new 4-week high. The long white candle was a bullish continuation, forecaster climbed, moving higher into its uptrend. Weekly forecaster also moved into an uptrend after today’s big move. Silver is now in an uptrend in the daily and weekly timeframes. 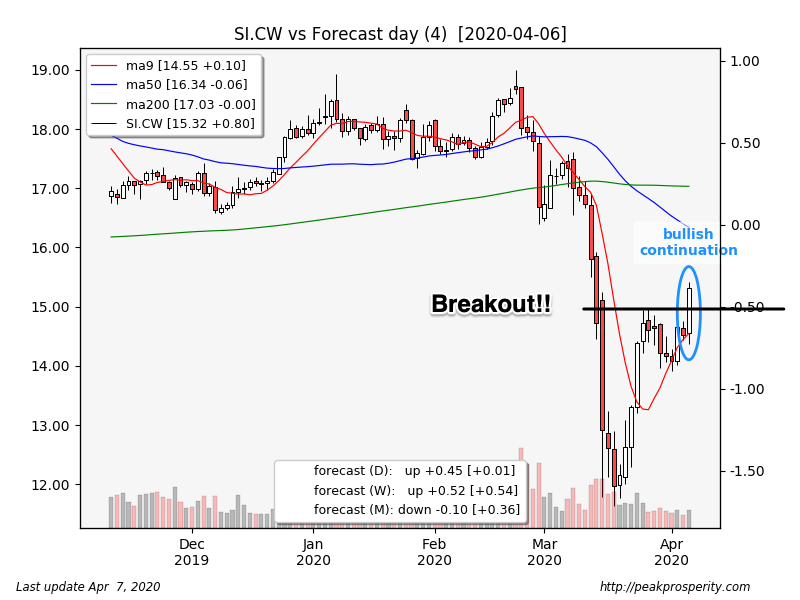 Miners gapped up at the open, chopped higher during the trading day, with a lot of violent movement right at the close. GDX moved up +5.57% on moderately light volume, while GDXJ jumped +9.59% on moderately heavy volume. XAU rose +5.88%, the short white candle was a bullish continuation, and forecaster climbed, moving higher into its uptrend. XAU is in an uptrend in all three timeframes.

Note that the miners, unlike silver and gold, have not yet made new multi-week (or multi-year) highs. They continue to lag, at least from a chart perspective. 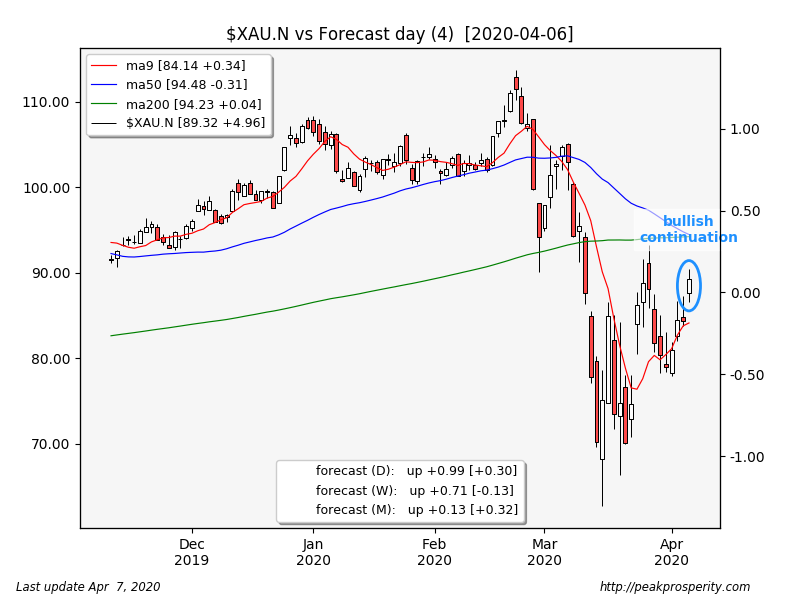 Copper shot up +0.04 [+1.83%] to 2.22 on moderately light volume. The short white candle was unrated, forecaster climbed, moving higher into its uptrend. Copper remains is in a downtrend in both the weekly and monthly timeframes.

Copper appears to be slowly chopping higher, with the emphasis on the word “slowly” rather than on the word “higher.” It is still hard to know if this slow move higher is just a dead cat bounce, or something more significant. 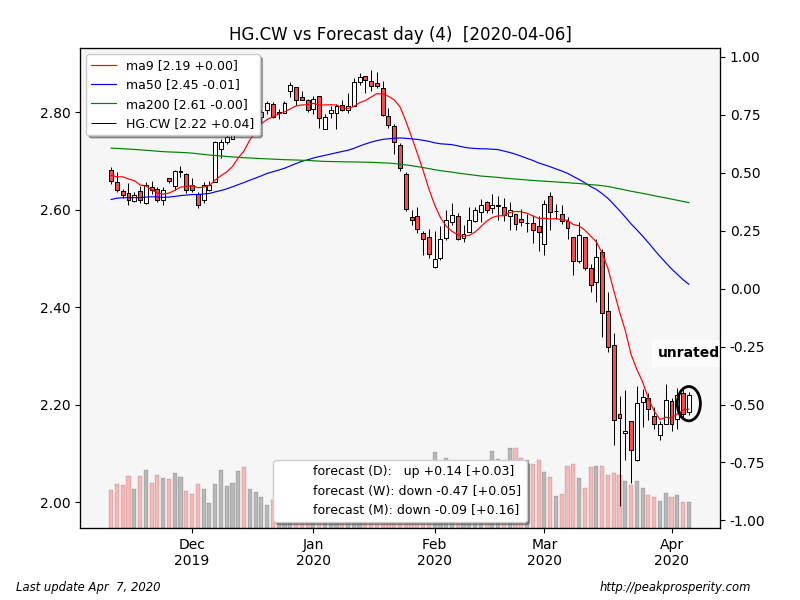 The buck inched up +0.08 [+0.08%] to 100.75 on light volume. The short black candle was a possible bearish reversal (39%), and forecaster dropped, but remains in an uptrend. The buck is in an uptrend in the daily and monthly timeframes. 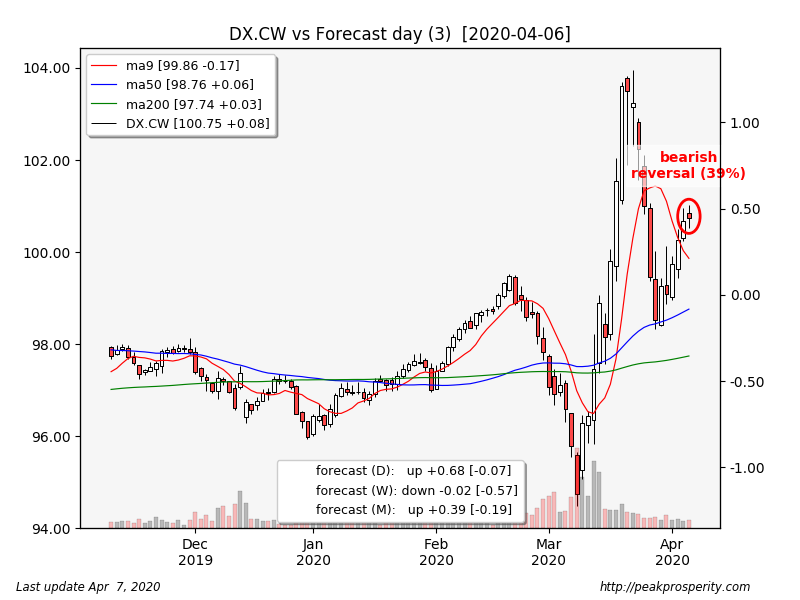 Crude fell -1.03 [-3.24%] to 30.72 on moderately light volume. The long white candle was unrated, forecaster dropped, but remains in an uptrend. Crude is now in an uptrend in the daily and weekly timeframes.

Market-moving news: OPEC+ postponed its emergency meeting, originally scheduled for Monday, to instead take place on Friday. This caused crude to gap down $3 at the open in Asia. Crude did rebound somewhat by end of day – and it remains far above the $22 level where it spent most of the last few weeks. My guess is: the low is in for crude.

SPX screamed higher +175.03 [+7.03%] to 2663.68 on moderate volume. The opening white marubozu candle was a bullish continuation, forecaster climbed, rising into an uptrend. Today’s rally also pulled the weekly into a (mild) uptrend as well – SPX is now in an uptrend in the daily and weekly timeframes. SPX ended the day at a new 5-week high.

Is this just money printing? Or is it genuine optimism? Sector map says: 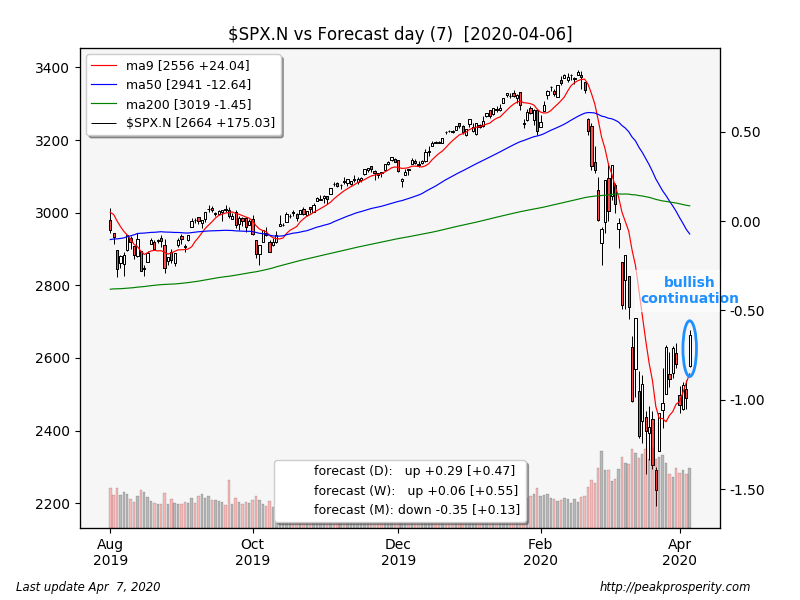 TLT dropped -0.26%. The swing high candle was a bullish continuation, and forecaster dropped, but remains in an uptrend. TLT is in an uptrend in the daily and weekly timeframes. The 30-Year yield rose +4.0 bp to +1.28%.

That’s not much of a drop in bonds given the massive rally in risk assets. I’m guessing that really is money printing. 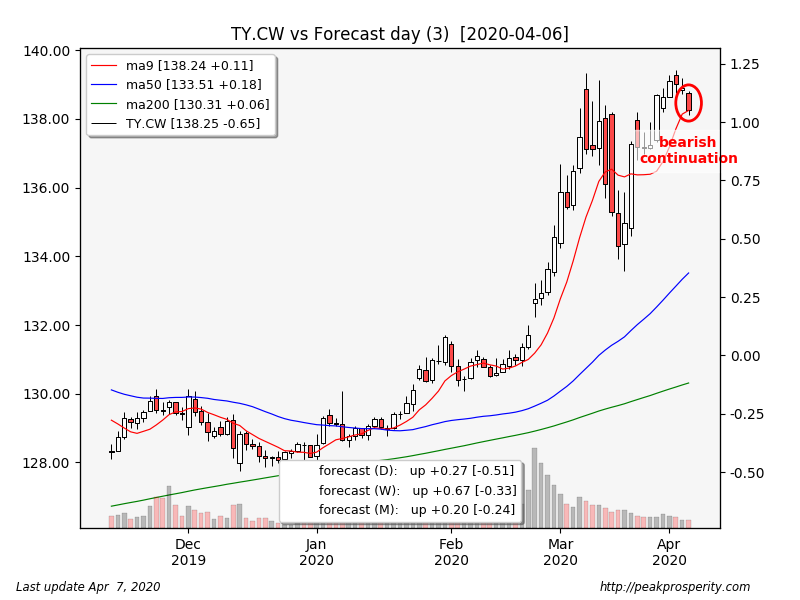 JNK shot up +2.50%. The swing low candle was a reasonably strong bullish reversal (44%), forecaster climbed, rising into an uptrend. JNK is now back in an uptrend in the daily and weekly timeframes. 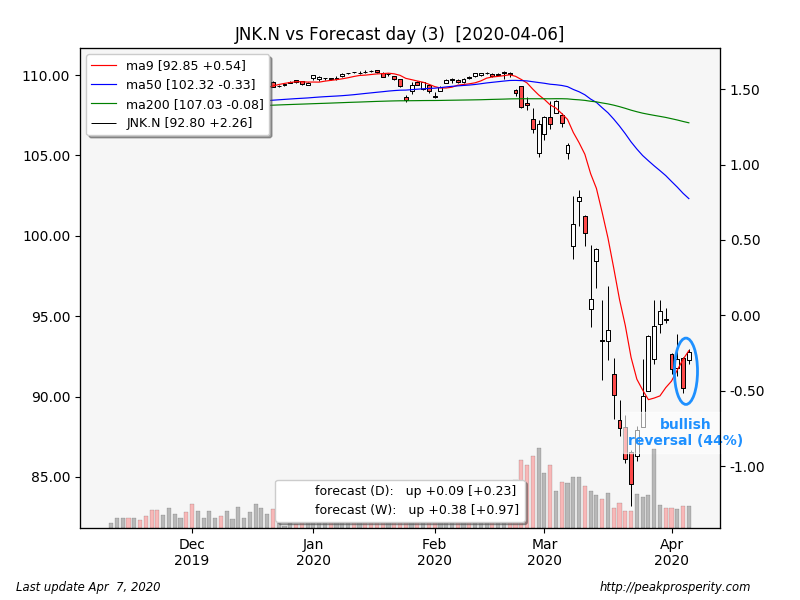 Even after the massive rallies in gold and silver today, the “physical” ETFs remain in premium. BV silver also remains in premium, while gold has slipped into discount.

Some good news on the pandemic in the US; hospitalizations have fallen in NYC, and are well below the original predictions of the model. And now, even NY Gov Cuomo is acknowledging that HCQ and Azithromycin treatments are helping people. Perhaps those two things are related?

Unlike the 2008-2009 money-printfest, this $5.5 trillion in printed money won’t be handed to the banksters, it will all be spent directly into the economy.

Same number of goods & services, and $5.5 trillion in additional money. Think that might be inflationary?

Post-pandemic shutdown, a number – perhaps a large number – of iffy businesses will fail. That will drop the country into recession.

Can we have an inflationary recession? I don’t know for sure, but that’s what my gut is telling me. Of course, this is all new territory.

We also don’t have reactions from how the rest of the world will react to the economic damage from the pandemic. Will all nations enact stimulus packages and monetize the debt used to fund it?

In the markets, gold broke out to a new all time high in Euros, and a new 8-year high in USD. Silver did well also, breaking above its recent high, and the miners followed along behind. Percentagewise they did well, but on the charts, they continue to lag behind the metals.

Equities shot to new multi-week highs, the sector map looks bullish, forecasters are back in uptrends; looks like a more sustainable return to risk on, at least in the near term anyway. Even crappy debt appears to have put in a near-term low here.

Long-dated US treasury bonds remain in uptrends, although they are fading somewhat.

The rally in the buck may be petering out.

No doubt the Fed is still shoveling new money to the banksters, and that is keeping the treasury market inflated. Is it also underwriting the rally in risk assets? Probably. But there does seem to be some genuine optimism, at least based on the sector map.

I think we’re setting up for that inflationary recession. Unless the rest of the world does what the US is doing, the buck will get hit hard. Otherwise, we may well end up with everyone stimulating and printing, and we’ll get to make economic history by having a strange sort of highly inflationary recession.

And I think gold is more than sniffing this out right now. I expect gold to break above the all time high of 1900 this year, probably sooner rather than later. Silver, hard to say, but it should rally also.

Just my guess. Not financial advice.

– AUD keeps climbing against the USD.  I got a report from the ANZ that they expect the AUD to fall to low 0.50’s over the next 2 months.  This would be a 15% decrease from where we are today.

…and we’ll get to make economic history by having a strange sort of highly inflationary recession.

All right buddy, I realize that you are just doing your job, and you do it well, but we get an average bear market bounce and now you are talking inflationary recession?

You will forgive me if I think you have an acute case of the goldbug virus, lol.

This is just an endogenous market mean-reverting re-tracement. Applying the news-of-the-day to market moves is what the fools on CNBC and Bloomberg do.

I do have an argument that favors your inflationary expectations, however. It’s called the Roaring 1920’s. The Spanish Flu 0f 1918-1919 was so horrible that the surviving population just wanted to forget about it and party like crazy for the next decade.

I can see public (and market) psychology changing like that, just not yet.

Thanks for the great report….Jeff

My inflation projection has nothing to do with the last few market days.

It has to do with the $5.5 trillion the government will spend directly into the economy within the next 3-6 months.

More goods & services won’t be produced, but there will be $5.5 trillion in freshly printed cash.  More money chasing the same number of goods = inflation.

And companies will definitely die.  That’s why I say it will be an inflationary recession.  Winter will come, lots of things will die, but there will also be inflation.  Sort of a tropical winter.

For guidance, I’m also looking at the gold move that happened following the 2008 printfest.  But in 2008, gold took 3 years to do its thing.  This time, the Fed has moved much faster, so has the government.  Obama’s “stimulus” was lame by comparison, and it took forever.  This one has some real muscle.  And they’re talking about doing several of them.  All with printed money.

So expect the price of toilet paper to soar? Who needs toilet paper when we have 5.5 trillion in cash to wipe with? LOL.

I sure hope the government can print our way out of a depression, but if they do it will be the first time in history (thinking of Japan here). And I think way too many Generals expect gold to do what it did in the last war (h/t you).

All the best, brother. I hope the goldbug virus goes exponential.

Remember back in 1933?  We DID print our way out of the depression.

That’s what devaluing the buck vs gold was.

It just took 4 years for them to get up the guts to do it.  They were too used to a gold standard.  These days, the Fed gets up the guts over a weekend.

The pace of interventions is near instantaneous right now.  They are huge, too.  The Fed isn’t afraid of doing anything.

The pace of interventions is near instantaneous right now.  They are huge, too.  The Fed isn’t afraid of doing anything.

If that’s the case, then why isn’t gold $3000+ right now. They have doubled the monetary base, shouldn’t gold (and everything else priced in dollars) double too.?

The answer isn’t manipulation of the gold market, it is debt deflation. When they did QE3 and QE4, the price of gold dropped by 50+%. How is that possible? I just don’t think macroeconomics has all the pieces to the puzzle.

Mr. Market just loves when everyone has the same expectations. Anyone would have to be stupid to think the FED/Treasury isn’t going to create inflation with all this money “printing”.

PS: I have the greatest respect for you and your opinions and I really enjoy brainstorming with you. Please don’t ever read any malice into my comments because I didn’t write them with that intent. I’m just looking for some semi-intellectual banter in the doldrums of isolation. Peace brother.

toilet paper is so much softer than dollar bills.

Really interesting discussion guys. When you have trillion pound gorillas pulling in opposite directions it gets really difficult to know which way things will fall (talking about prices rather than your discussion)…

For guidance, I’m also looking at the gold move that happened following the 2008 printfest. But in 2008, gold took 3 years to do its thing.

And what about the drop of 30% during 2008 as the (albeit financial) disaster was unfolding? Why wouldn’t a similar (perhaps again margin call driven) drop happen again this time, before the big leg up?

This time, the Fed has moved much faster, so has the government. Obama’s “stimulus” was lame by comparison, and it took forever. This one has some real muscle. And they’re talking about doing several of them. All with printed money.

If they’re already talking about doing several rounds then this first one must be lame rather than muscley, by their own admission 😉

FD: I exited my long gold yesterday and am now only short S&P and silver apart from PHYS insurance.