Gold moved higher in Asia, then chopped sideways through the remainder of the day. The short white candle was a bearish continuation, and forecaster fell, moving into a slight downtrend. Gold is still in an uptrend in the weekly and monthly timeframes.

Gold/euros rallied +18.03 [+1.24%] to 1468.54 on light volume. The bullish harami candle was a bearish continuation, forecaster dropped, moving deeper into its downtrend. Gold/euros is in a downtrend in both the daily and monthly timeframes.

Today’s rally in gold came in the face of a strong move higher in the buck; gold’s downtrend is very slight. 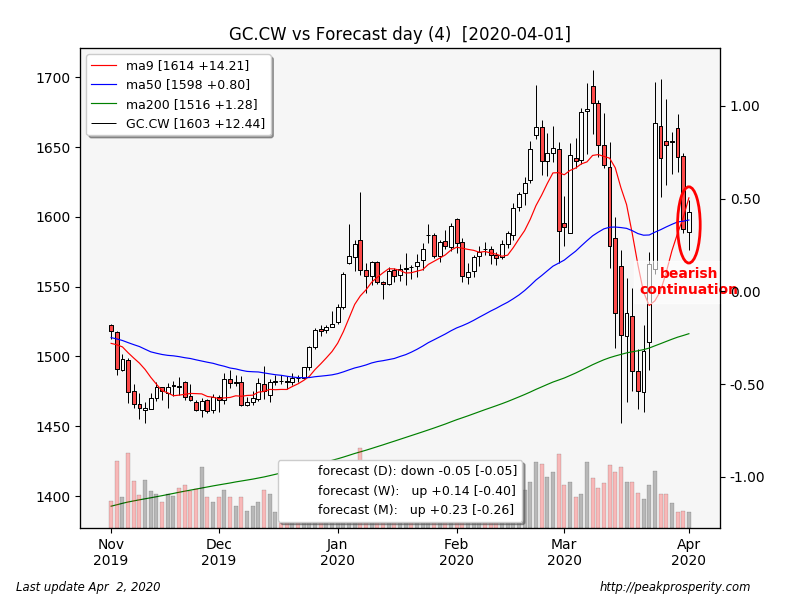 Silver chopped slowly lower throughout the trading day. The short black candle was a bearish continuation, forecaster dropped, but remains in an uptrend. Silver is in a downtrend in both the weekly and monthly timeframes. All of the trends in silver right now are fairly mild.

No reversal yet for silver either. 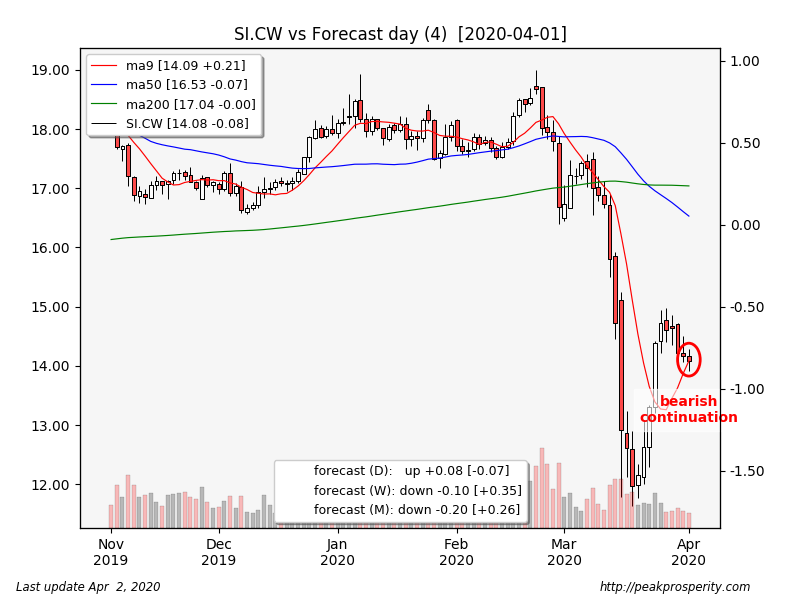 The miners shot higher in the first 90 minutes of trading, fell in the afternoon, and then rallied through end of day. GDX shot up +4.30% on light volume, and GDXJ jumped +3.84% on light volume. XAU moved up +2.52%, the short white candle was a possible bullish reversal (30%), forecaster climbed, but remains in a downtrend. XAU remains in an uptrend in the weekly and monthly timeframes.

Miners are hinting at a reversal – both forecaster and candle look positive, but not conclusive just yet. 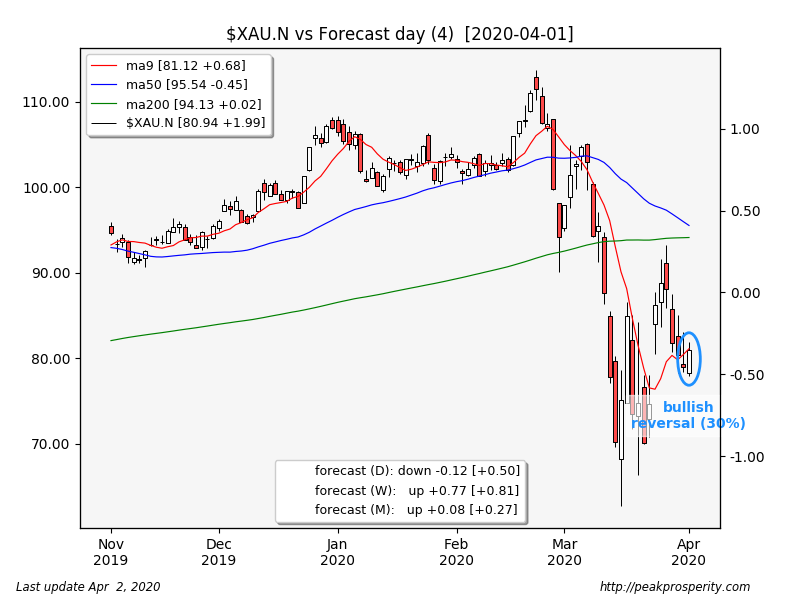 Copper fell -0.05 [-2.26%] to 2.16 on moderately light volume. The long black candle was a possible bullish reversal (32%), forecaster dropped, moving deeper into its downtrend. Copper is in a downtrend in all three timeframes.

I’m not sure why the candle code liked that particular print, but there you go. 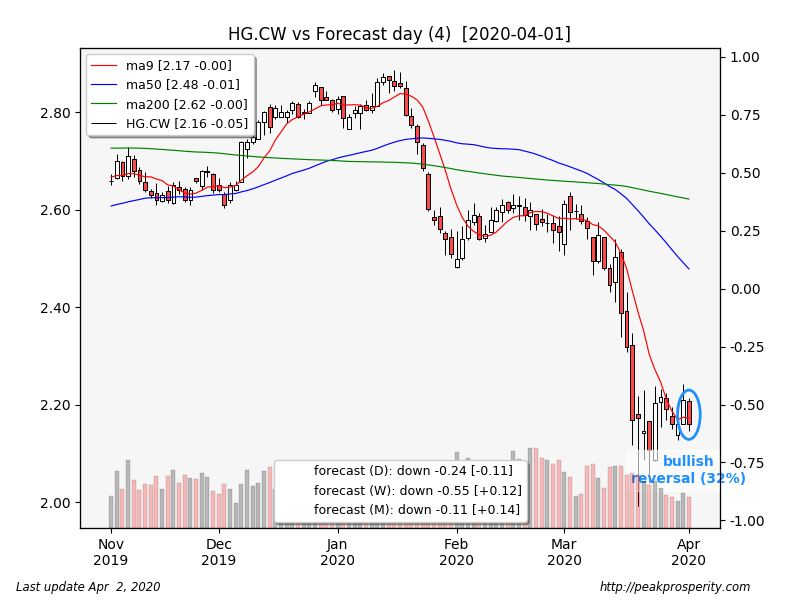 The EIA report was horribly bearish: crude +13.8m, gasoline +7.5m, distillates -2.2m. Crude initially plunged on the report, but managed to bounce right back. I take this as a positive sign. Market rallies on terrible news: bullish. 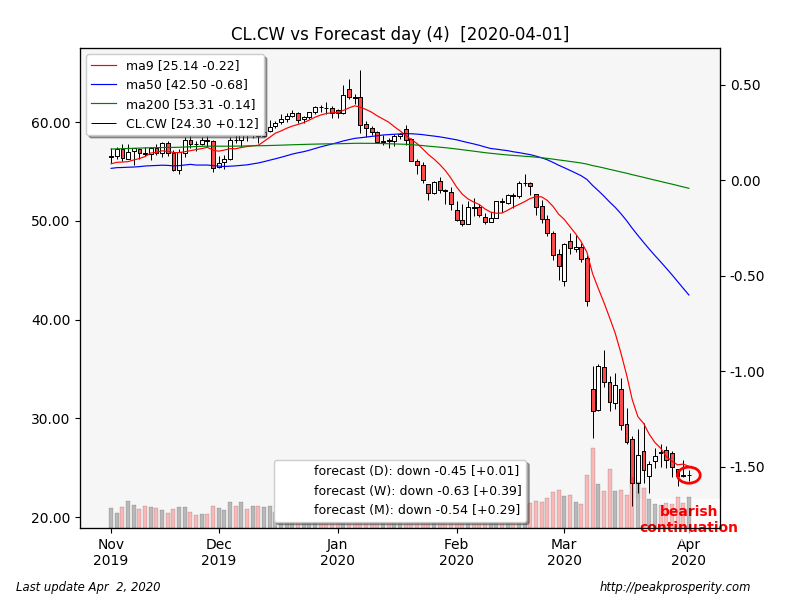 SPX plunged -114.09 [-4.41%] to 2470.50 on moderate volume. Equities fell all day long, rallying slightly in the last 15 minutes of trading. The swing high candle was (curiuosly) neutral, but forecaster dropped, falling back into a downtrend. SPX is now back in a downtrend in all three timeframes.

The candle print looked bad to me (and to forecaster), but the candle code wasn’t impressed. The NYSE.Advance.Ratio has also moved into a downtrend. 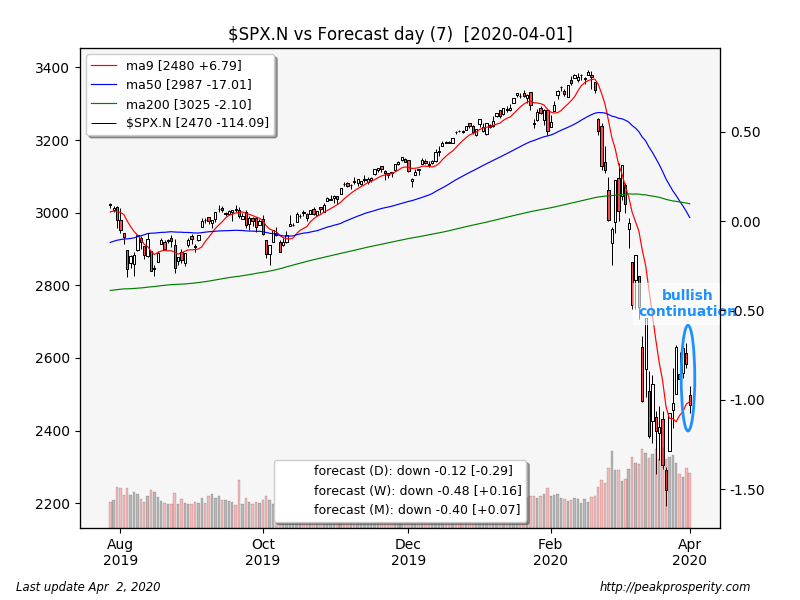 TLT climbed +1.25%. The short black candle was neutral, forecaster dropped, but remains in an uptrend. TLT is in an uptrend in the daily and weekly timeframes. The 30-Year yield fell -11.0 bp to +1.24%.

TY climbed +0.35%. The opening white marubozu candle was a bullish continuation, forecaster climbed, moving higher into its uptrend. TY is in an uptrend in all three timeframes. The 10-Year yield fell -9.0 bp to +0.61%. This is just 7 bp away from the all time low set back on March 9th.

Bonds are moving back towards record low yields. How much of this is flight to safety, and how much is the Fed’s Unlimited QE? We will never know. 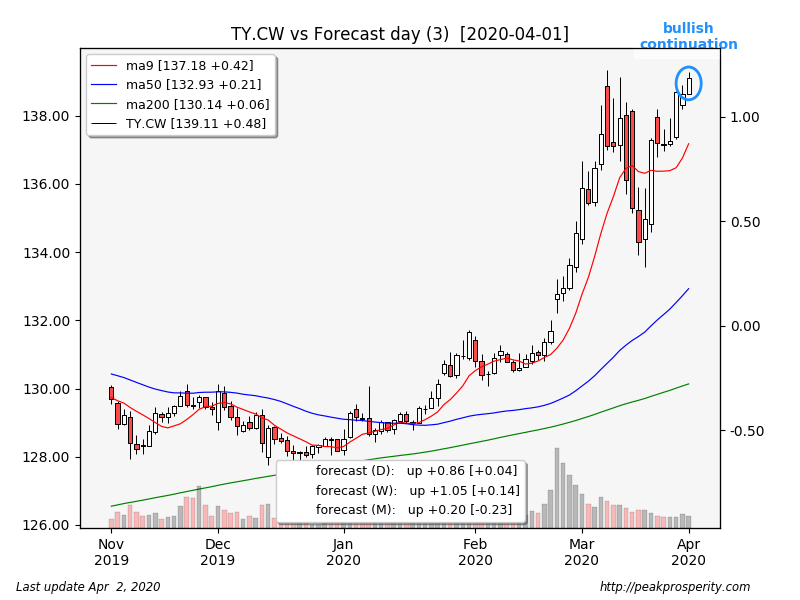 JNK plunged -3.18%. The confirmed bearish nr7 candle was actually neutral, but forecaster dropped, falling into a downtrend. JNK is back in a downtrend in both the daily and weekly timeframes. As with SPX, the candle code doesn’t agree this is a bearish reversal. 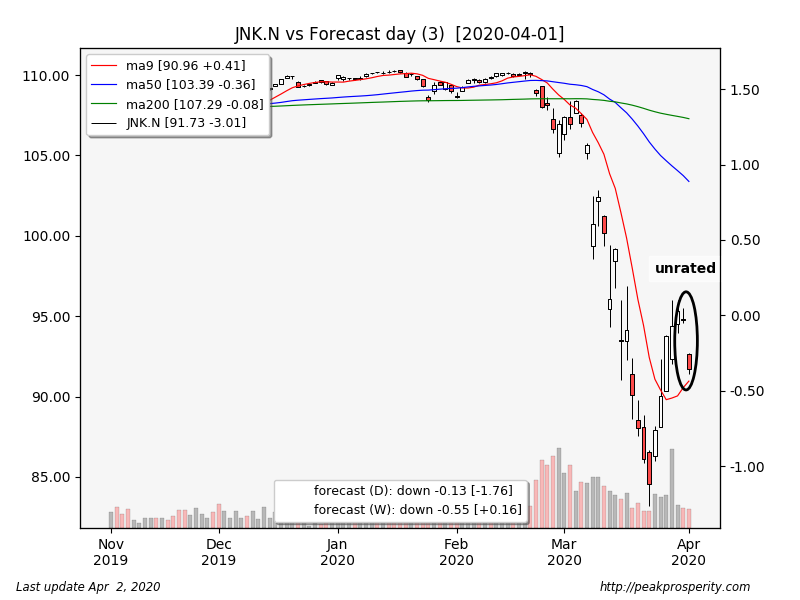 All “physical” ETFs remain in premium, and there are premiums over spot for both gold and silver at BV.

There is clearly a shortage of physical gold and silver at this time.

The buck staged a reasonably strong rally today – this on a day when Trump came out and stated that the US was going to have a “really horrible” next few weeks, with between 100-200,000 Americans dying. While I don’t trust market reactions in smaller markets, the global currency markets are – probably – too vast for the Fed to wang around. Today’s dollar rally seems like a vote of confidence of some sort in the US response.

“Bad shit is going to happen. Be prepared for it.” Also, the lying about masks is stopping too. How ridiculous – “don’t wear masks, they don’t work – save them for hospital workers, for whom they do work.” Might telling the truth actually be confidence-boosting? I think it might.

Both miners and gold did fairly well today; gold did well in spite of the dollar rally, which is a positive sign, and the miners did substantially better than gold. Gold open interest – which usually roughly tracks price – has fallen 300k contracts, and is down to the same level last seen in June 2019, when price was at 1350.

I know I talk about this a lot, but the reason I focus on this is that the low for gold happened in 2008 – roughly – once the OI had fallen by about 50%. It appeared that “enough” managed money longs had to be rinsed out (and enough commercial shorts had to cover) before price could start moving higher again.

The Fed has declared Infinite QE. The US government has implemented a $2 trillion stimulus (with the 2019 Federal budget of 4.5 trillion), and now Trump is talking about another $2 trillion for infrastructure spending. He says – he’s a guy who knows how to use debt – that we can borrow at 0.5%, and rebuild America at a very low rate. He’s right, as far as that goes. Who wouldn’t want to build stuff that (presumably you need) if you can pay for it at 0.5%?

So if you combine Infinite QE and $4 trillion in Fed-monetized US treasury debt that is spent directly into the economy, do we imagine that might be a teensy bit inflationary? This isn’t Ben Bernanke’s printfest that just affects financial assets. This is much more like Modern Monetary Theory. It isn’t just for banksters and asset classes.

In the meantime, short rates are at 0%. There is no penalty for holding gold at this point.

So back to OI. I think it is providing us hints as to what happens next, based on the 2008 experience. 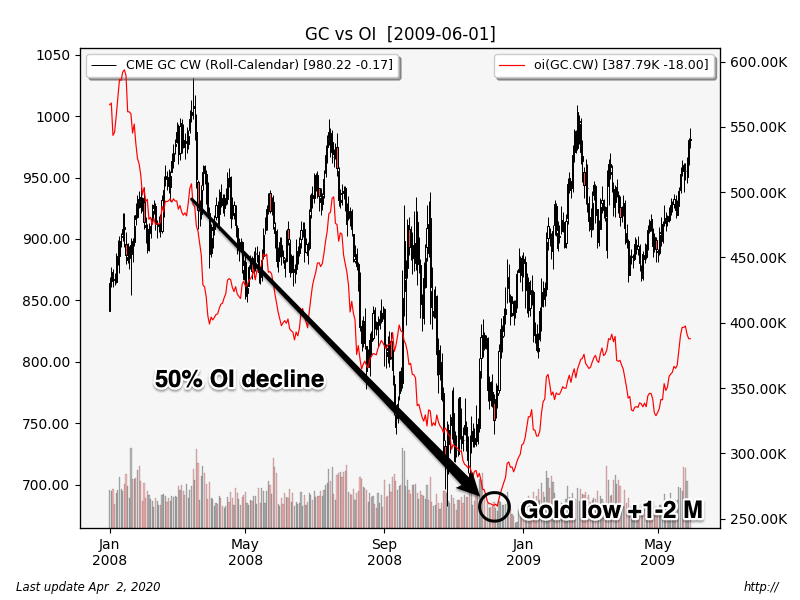 Today: OI has dropped 40%, while price has actually risen slightly. Is the OI plunge over? Not yet. The bottom of OI plunge should come after the gold low, using 2008 as our model. How long? Things seem to be happening a lot faster this time around – what took months in 2008 is taking place in weeks during 2020. 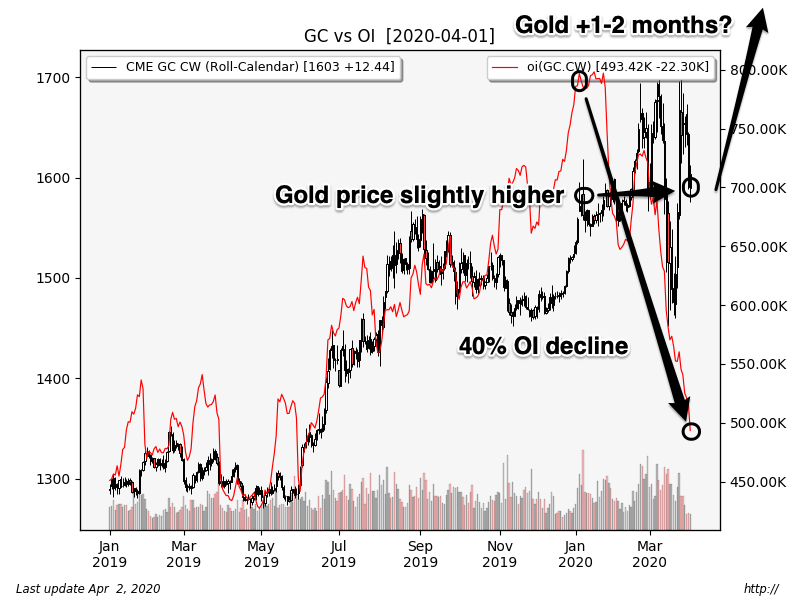 The risky part to this guess is assumption #1: “I think we’ve seen the lows.” Unfortunately, we will really only know if this is true once the OI starts moving higher again, and OI is a lagging indicator. A safer bet is to wait for that OI to turn around first – so you don’t catch a falling knife.

As always – NOT FINANCIAL ADVICE!!!

You make a compelling evidence based case Dave. The one thing I don’t get is why you interpret yesterday’s dollar rally as a vote of confidence in the US (response). Couldn’t it just as likely be the result of a flight to safety?

I loved a comment today along the lines that nobody knows which way the market is going to go (sorry forgot to grab the reference).  I’m in the “worst is yet to come” but 50% says I’m wrong.    I hope I’m wrong.

I was also fascinated by today’s COVID Presidential Update that spent an hour on talking about a war on “drugs” with a lot of arrows and references pointing towards Venezuela.  WTF? Are you Yanks planning to “liberate” Venezuela?  Never let a good crisis go to waste?

You make a compelling evidence based case Dave. The one thing I don’t get is why you interpret yesterday’s dollar rally as a vote of confidence in the US (response). Couldn’t it just as likely be the result of a flight to safety?

Heh.  You have your answer in the body of your question.  An incompetent – a continuously incompetent response to the virus directly affects the perception of the US as a safe haven. Ergo, money flees “what used to be the safe haven” as people overseas re-calculate how they feel about the US.

I think the US response to the virus was chaotic and confused all during the recent dollar collapse, and it started to firm up this week.

Of course, that’s just a guess, but it is a little bit informed.  Foreigners do kinda-sorta believe the CCP propaganda.  “China is through it, gosh aren’t we clever” (please ignore the theater-closings, etc).  Half of the US press is going along, in order to hose Trump.  “US has more cases than China.”  America looks bad = Trump doesn’t get re-elected.  Lying in a good cause, plus, cozying up to the CCP will make you rich, everyone knows that.

I’ve been asked by my foreign friends, “WTF is America doing anyway?  It looks really bad over there.”

But at least it seems like there’s a reasonable plan in place now.

I also think there’s a lot of “smoke” around treatment options, some of which will probably turn into “fire” relatively soon.

This is my gut (and also my book – book follows gut, in this case), but I think we’ll find something pretty soon.  My gut thinks the pandemic will “end” (as a “shut down the US” proposition) within the next month.

There are two trials with just HCQ that have endpoints on April 21 – one treatment, another preventative.

I’m especially excited about the second one.  Medical staff are already using HCQ on an ad-hoc basis.  If this trial (below) works reasonably well, then everyone who tests positive will get HCQ, and – if this works – they won’t progress.  And they are now immune, too.  Combine with widespread testing = pandemic happens, but very few die.

Stopping patient progression to severe illness will turn a bunch of deaths into non-deaths.  Pandemic still happens, but many fewer people die.  And this is just an HCQ trial.  No Azithromycin.

Well.  That one I don’t understand either.  VZ is a sad case, exacerbated by low oil prices.  The US should just leave it alone.  There’s nothing like giving Maduro a concrete external foe to rally his supporters to him.

How ridiculous – “don’t wear masks, they don’t work – save them for hospital workers, for whom they do work.”

If your HCQ hunch proves correct and we get more positive trial results, won’t this be a headwind for gold as the safe haven demand will be reduced?

Excellent interview with Infectious disease expert from Korean university. In it he discusses masks and essentially says that he finds it odd the US/Europe doesn’t wear masks. His conclusion – they recommend public doesn’t wear masks because of the shortage for healthcare workers.

I suspect now that the shortage is resolving – although at my hospital we’re told to USE THE SAME MASK FOR 7 DAYS! – that’s why all of a sudden masks “work” for the general public.

Notably, Cornell has put out study showing that 75c oven for 30 minutes x 20 uses does not degrade filtration ability of an N-95 mask. Another study in references demonstrated 70c for 30 min will kill coronavirus. https://www.vet.cornell.edu/sites/default/files/Cui-N95%20disinfection%20and%20resuse%202020-3-25.pdf

What are some good (non-financial advice, non-recommendations) companies that might benefit from new types of test kits or an effective medicine/treatment getting approved?

On a side note, the whole overt lying by authorities early on about masks being ineffective and urging people not to buy them and wear them is very much akin to the big banks not marking swaps correctly during the GFC until they had unloaded their positions and gone short.

This kind of stuff is getting more blatantly obvious to more and more of the public, and I believe this pandemic is going to go a long way in exposing more of the corrupt nature of our system.