Gold chopped sideways until London, when it was pounded lower several times; it tried rallying again, but then was pounded again repeatedly, all the way into into the close. The black marubozu candle was a bearish continuation, forecaster dropped, falling into a downtrend. Gold is in an uptrend on both the weekly and monthly timeframe.

Gold/euros plunged -47.42 [-3.18%] to 1443.88 on light volume. The black marubozu candle was a bearish continuation, forecaster dropped, moving deeper into its downtrend. Gold/euros is in a downtrend in all three timeframes. 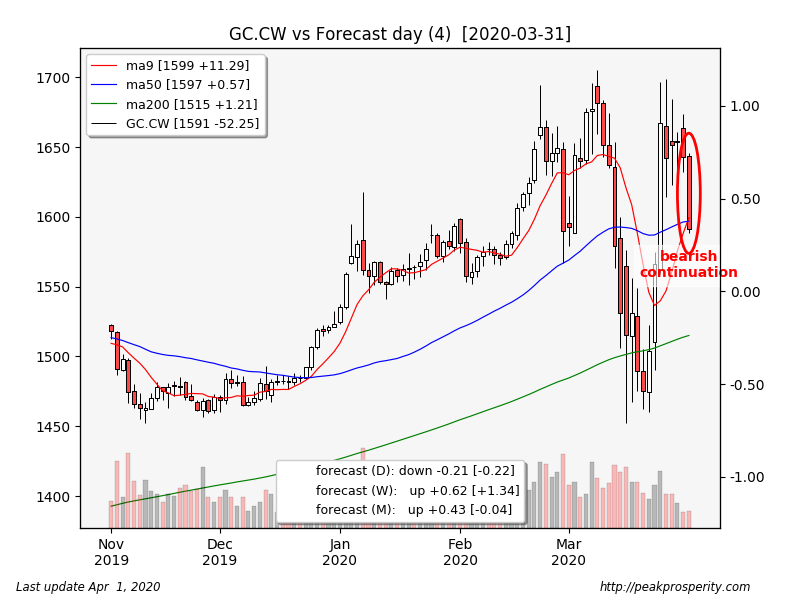 Silver chopped sideways today, first spiking higher, then selling off. Curiously, as gold was repeatedly smashed lower, silver did not seem to be as badly affected. The bullish doji star candle was a bearish continuation, but forecaster climbed, moving back into an uptrend. Silver remains in downtrend in the weekly and monthly timeframes. 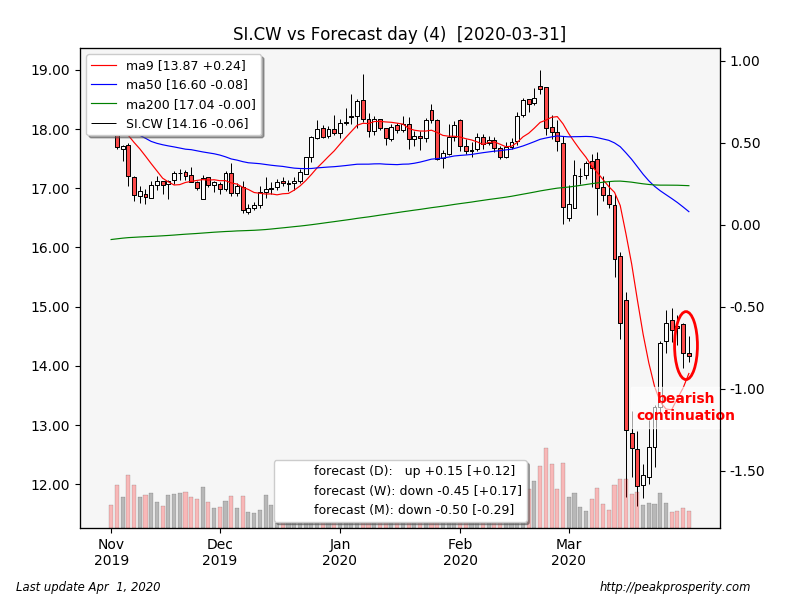 The miners rallied strongly for the first half of the day, then reversed direction at around noon, selling off steadily right into the close. GDX plunged -3.72% on light volume, and GDXJ fell -3.30% on moderately light volume. XAU dropped -1.79%, the spinning top candle was unrated, and forecaster was unchanged, remaining in a downtrend. XAU is in a downtrend in all three timeframes. 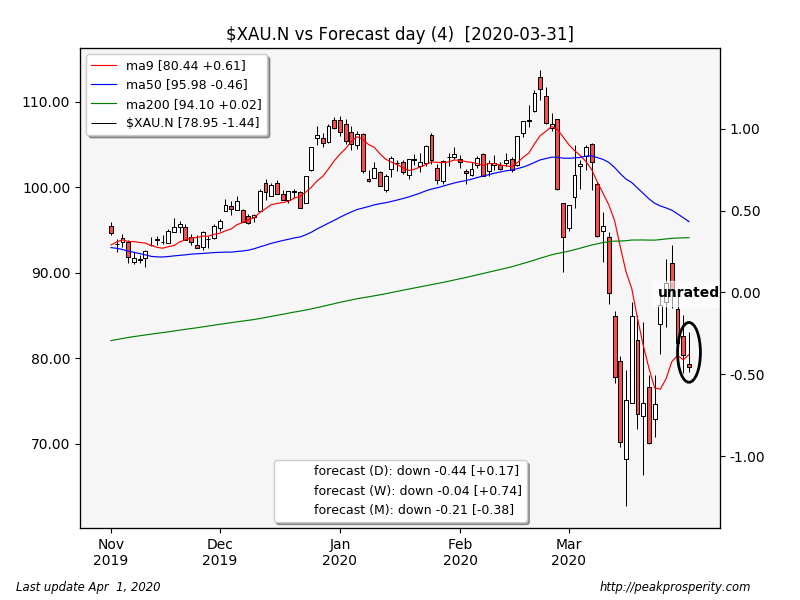 Copper shot up +0.05 [+2.31%] to 2.21 on moderately light volume. The swing low candle was a likely bullish reversal (65%), forecaster climbed, rising into an uptrend. Copper is in a downtrend in both the weekly and monthly timeframes. Copper also closed convincingly back above the 9 MA. It appears as though copper is in the process of putting in a longer-term low. 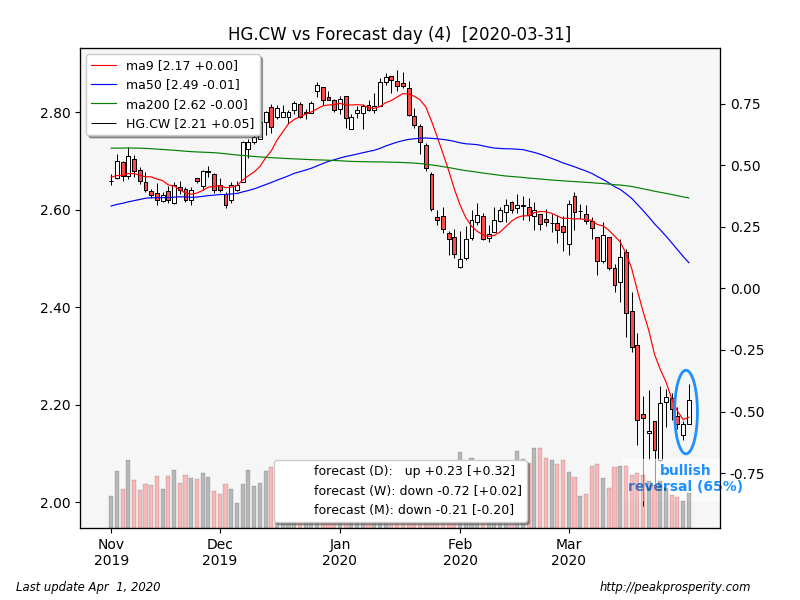 The buck moved down -0.18 [-0.18%] to 99.09 on light volume. The long black candle was a bullish continuation, forecaster climbed, but remains in a downtrend. The buck is in an uptrend in the weekly and monthly timeframes. 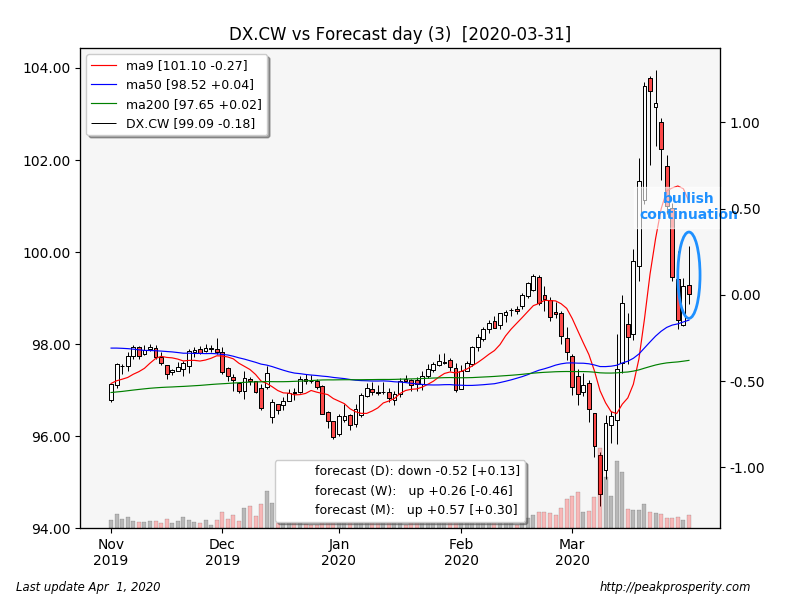 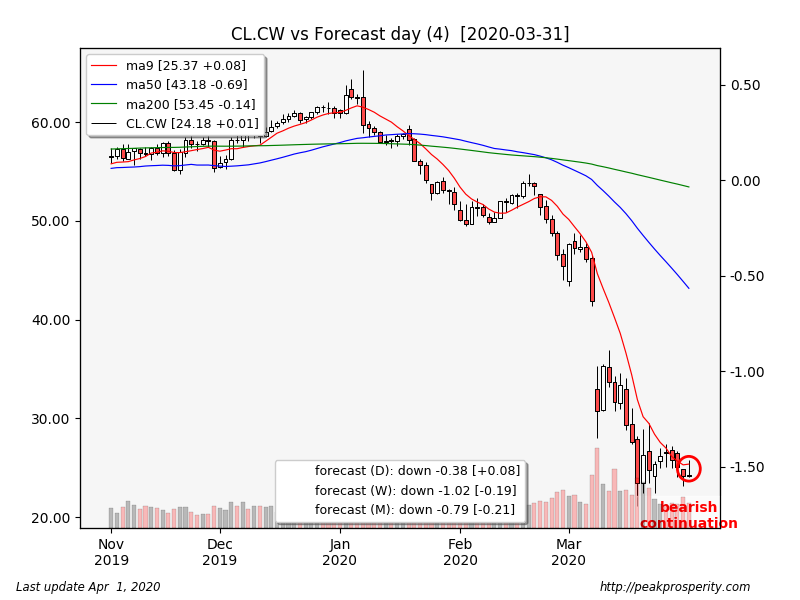 SPX dropped -42.06 [-1.60%] to 2584.59 on moderate volume. Most of the losses came in afternoon trading – a last-30-minute rally attempt failed. The bearish harami candle was a reasonably strong bearish reversal (47%), forecaster dropped, but remains in an uptrend. SPX is in a downtrend in both the weekly and monthly timeframes. Normally the harami candle patterns are fairly weak – this one was extremely strong for a harami. 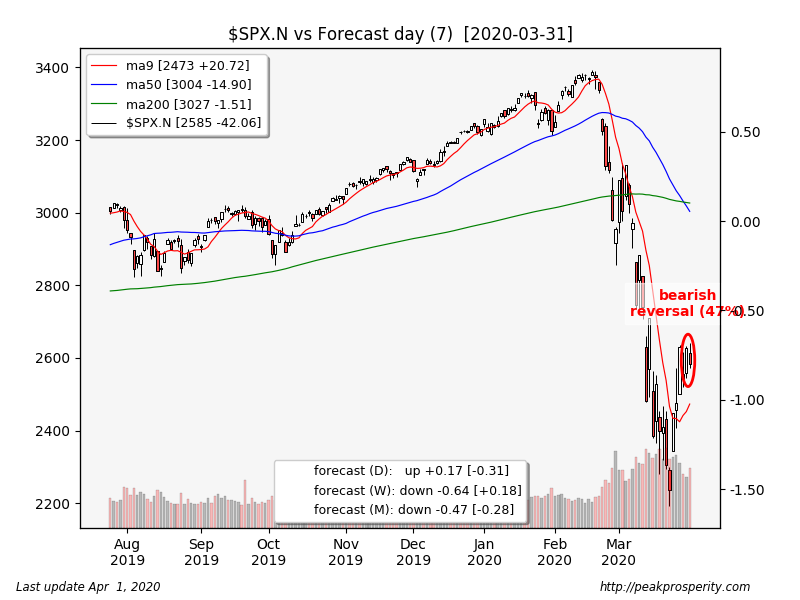 JNK fell -0.64%. The bearish harami candle was a bullish continuation, forecaster dropped, but remains in an uptrend. JNK remains in an uptrend in the daily and weekly timeframes. Crappy debt is starting toshow a bit of weakness,
but the candle print was stronger than SPX. 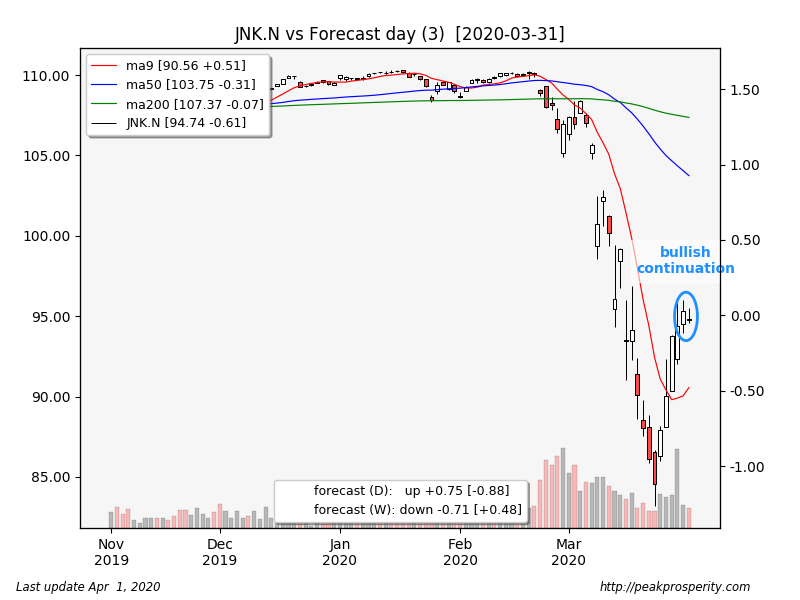 All “physical” ETFs have moved into premium, with PHYS the standout. Today’s gold smash didn’t trigger much selling at all in PHYS; it fell just -0.30%.

There is a shortage of both physical gold and physical silver right now.

What was the story today with gold’s big smash? Well, the drop in OI suggests it wasn’t official intervention. Either the report is lying, or the smash has something more to do with month and quarter end, with funds repositioning money elsewhere – out of gold, into – something else? Perhaps some bankster wanted some call options he wrote to expire worthless. From our view from the cheap seats, we can never really know.

I do believe the sharp drop in OI continues to be a positive sign for gold.

Silver looked quite strong in comparison to gold – it seemed mostly immune to whatever selling pressure that was forcing gold lower. Platinum was also just drifting lower rather than cratering.

Miners are still weak. At some point they will be great buys, but who knows when the selling pressure on the mining shares will let up.

SPX appears as though it might have put in a top. The harami pattern was quite strong. JNK isn’t confirming, at least not yet.

Copper looks positive, while crude is looking fairly weak. No clear signal yet from these two.

That’s all I’ve got.

I think you will find them interesting….J

Unfortunately, she has disappeared, and her bio has been scrubbed from the Wuhan Institute of Virology lab where she worked, but informational traces of her remain.

According to a paper written by a Chinese professor (Botao Xiao, PhD) from Wuhan, researchers working at the level 4 lab on a project studying bat corona viruses were splashed with blood and urine samples from the bats being studied.  This is how they were infected.  He alleges the researcher died, and the funeral workers caught the virus from her body.

10-year China veteran Laowhy86 connects all the dots in the following 8 minute video.  I found it very compelling.