Gold jumped higher at the open in Asia, but then fell throughout the day. The short black candle was a bullish continuation, and forecaster was unchanged, remaining in a slight downtrend. Gold is still in an uptrend in the weekly and monthly timeframes. Most of gold’s decline today was a currency effect.

Gold/euros fell -4.32 [-0.29%] to 1491.30 on light volume. The short black candle was a bullish continuation, forecaster dropped, dropping into a downtrend. Gold/euros is in a downtrend in both the daily and monthly timeframes. 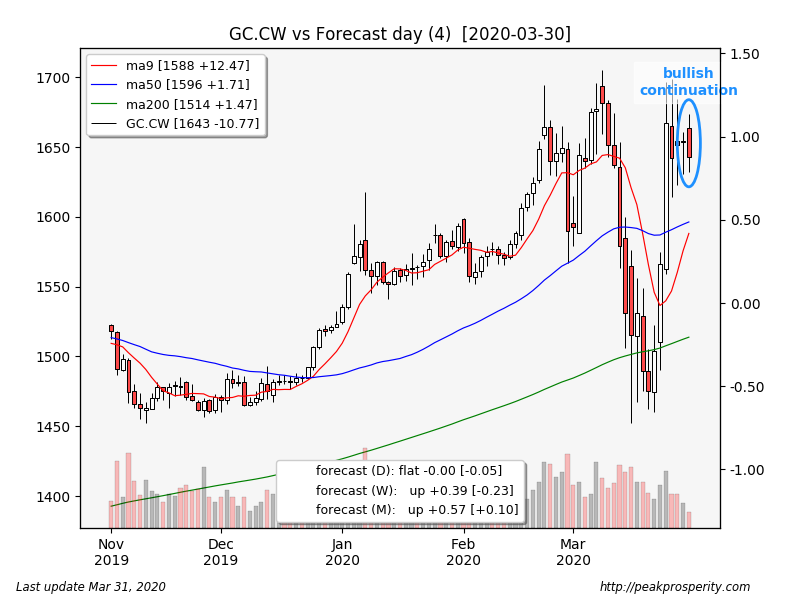 Silver dropped sharply in early trading in Asia, then chopped sideways throughout the rest of the day. The confirmed bearish NR7 pattern was actually neutral, but forecaster dropped, falling into a downtrend. Silver is now in a downtrend in both the daily and monthly timeframes. This was also a 3-candle swing high, which is a bearish pattern.

The gold/silver ratio climbed +2.58 to 115.56. That’s bearish. Silver is back to behaving badly once again. 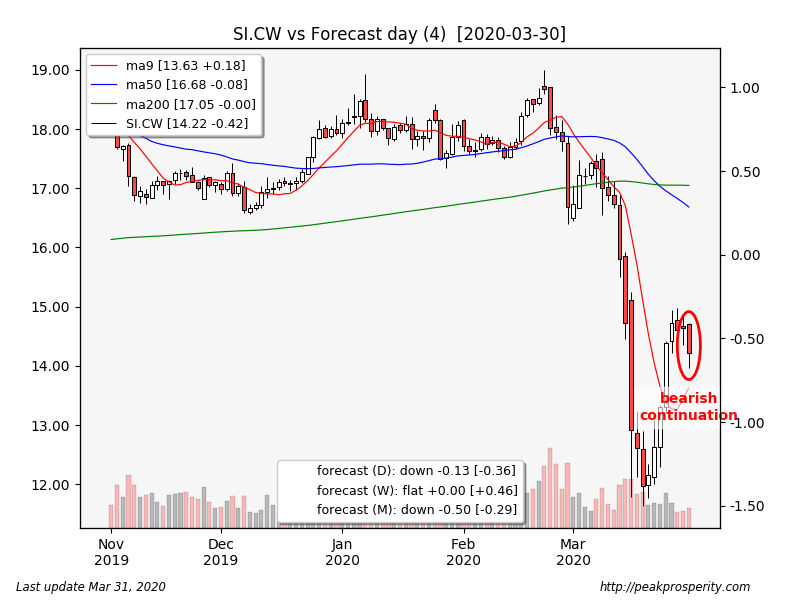 Miners in the first hour of trading, then fell for most of the rest of the day, and then rallied once more in the last 30 minutes of the trading day. GDX fell -1.81% on moderately light volume, while GDXJ dropped -2.84% on moderately light volume also. XAU moved down -1.74%. The spinning top candle was neutral, and forecaster dropped, moving deeper into its downtrend. XAU is in an uptrend in the weekly timeframe. 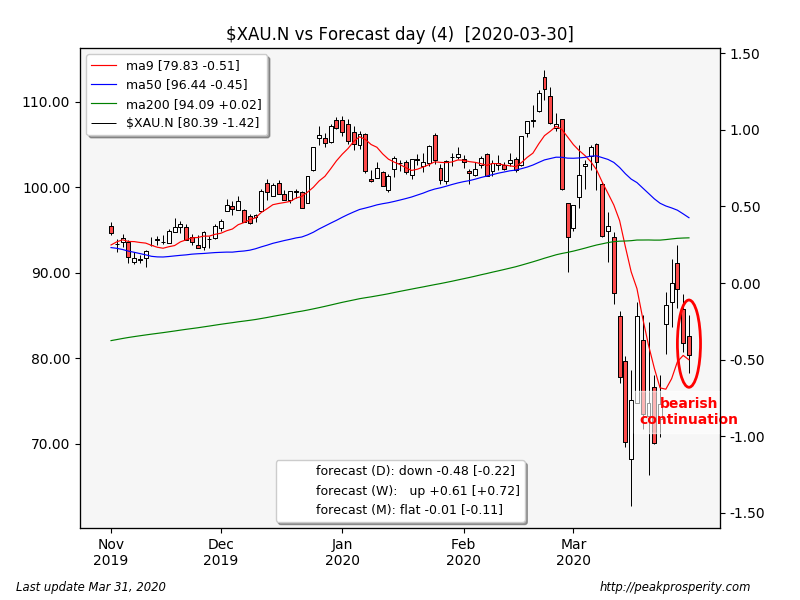 Copper was unchanged at 2.16 on moderately light volume. The closing white marubozu candle was a bearish continuation, forecaster dropped, moving deeper into its downtrend. Copper remains in a downtrend in all three timeframes. Copper continues to project bad news for the global economy, as well as China.

The buck climbed +0.74 [+0.75%] to 99.27 on very light volume. The opening white marubozu candle was unrated, forecaster climbed, but remains in a downtrend. The buck remains in an uptrend in the weekly and monthly timeframes. The buck seems to have found support at the 50 MA.

It is tempting to project onto the USD rebound some sense of improving global confidence in the US government’s handling of the pandemic. When Trump says, “we have lots of cases, because we are doing the most testing”, this makes a certain amount of sense. And the Federal government’s response does seem to be improving. “Men and nations do act wisely when they have exhausted all the other possibilities.” https://quoteinvestigator.com/2012/11/11/exhaust-alternatives/ 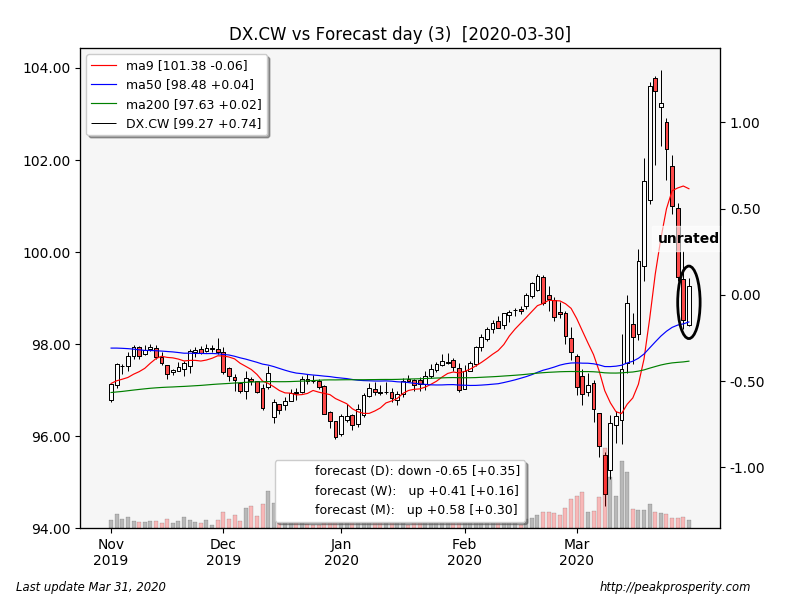 Crude fell -0.89 [-3.55%] to 24.17 on moderate volume. The short black candle was a possible bullish reversal (36%), but forecaster dropped, moving deeper into its downtrend. Crude is in a downtrend in all three timeframes.

Note: my code uses a “calendar weighting” to provide a price for crude that attempts to insulate my charts from jumping dramatically at a particular contract expiration. What does this mean? It means the prices you see on my charts are sometimes quite a bit higher than the front month price. I’ll try and explain, below:

The contango right now for crude has just screamed higher. [Contango: how much more you have to pay for a commodity delivered in a later-dated future contract vs the front-month.] See the chart below: while the front month ended the day at roughly $20.25 [with a low of 19.27, a price last seen in 2002], the next month price is +4 higher, 2 months out it is +7.43, and 3 months out: +9.37. So if you want to lock in $20 crude, you can’t really do it unless you take delivery now, rent a tanker, and store it yourself.

Why does contango explode higher? The market thinks that crude’s low price is driven by the pandemic; there may be
a glut right now, but the futures market is predicting the glut won’t last that long. 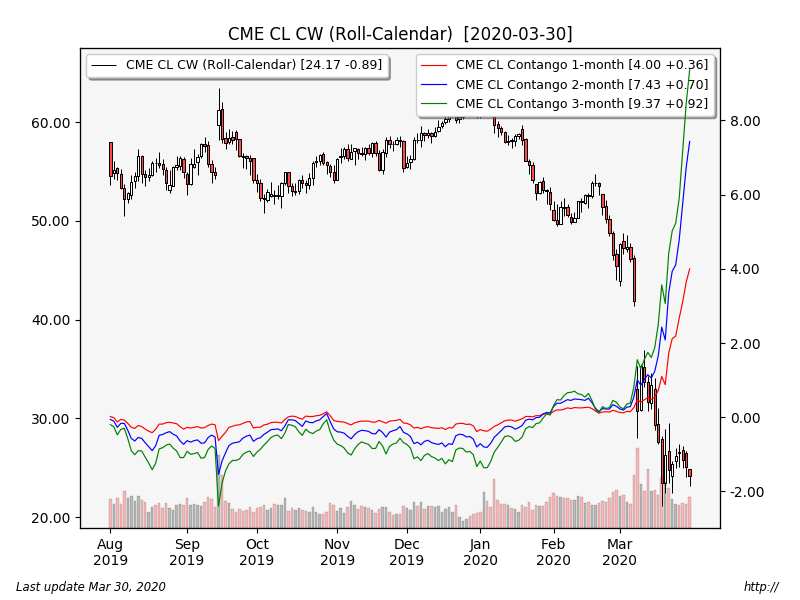 Equities gapped down at the open in Asia, but then rallied for most of the day, closing at the highs. SPX closed up +85.18 [+3.35%] to 2626.65 on moderately light volume. The long white candle was a bullish continuation, and forecaster climbed, moving higher into its uptrend. SPX is in a downtrend in both the weekly and monthly timeframes.

The VIX fell -8.46 to 57.08. Is this fear disappating? Or the Fed shorting volatility? Its hard to know given the massive amount of intervention happening right now. The sector map doesn’t look all that great – that’s one clue 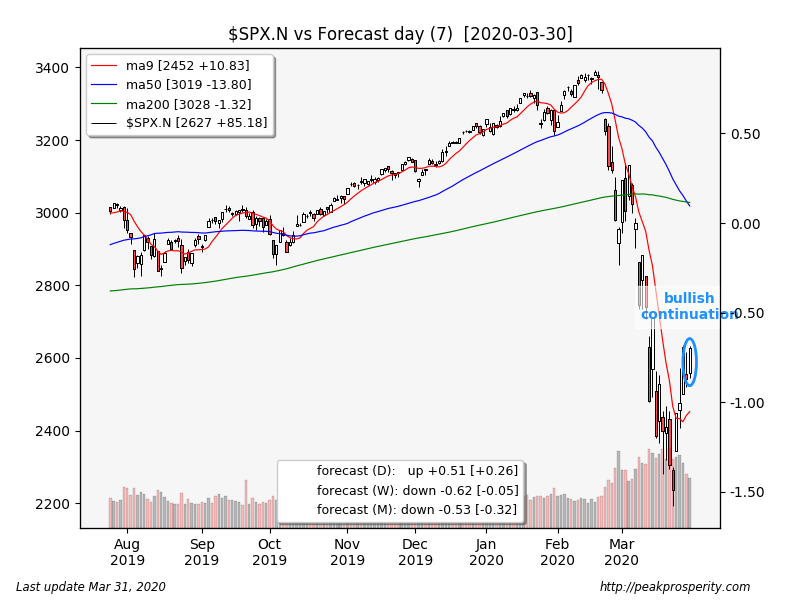 TLT fell -0.82%. The closing black marubozu candle was a reasonably strong bearish reversal (41%), forecaster dropped, but remains in an uptrend. TLT is in an uptrend in the daily and weekly timeframes. The 30-Year yield rose +3.0 bp to +1.32%.

JNK rallied +1.03%. The long white candle was a bullish continuation, forecaster dropped, but remains in an uptrend. JNK is in an uptrend in the daily and weekly timeframes. 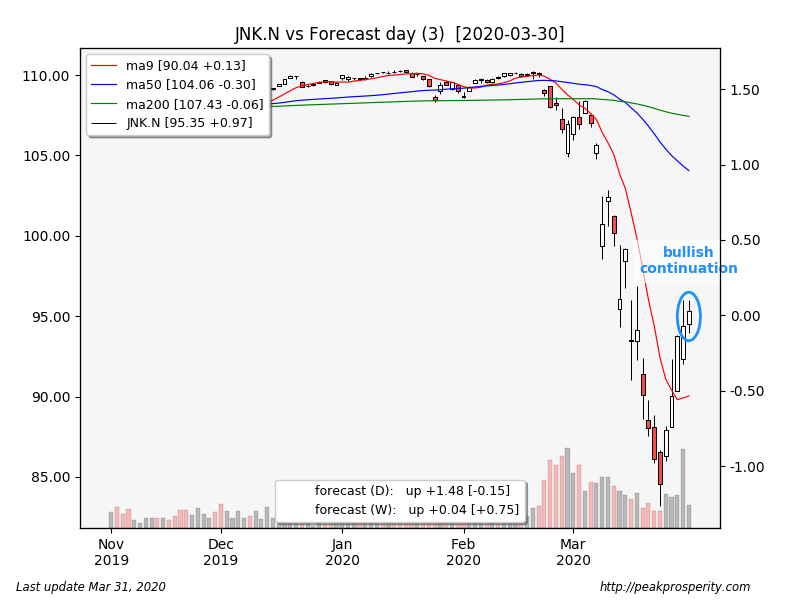 PSLV has jumped right back into premium. Amusingly, while COMEX SI prices declined today, PSLV actually rallied, closing up +1.32%. It appears as though there are a fair number of buyers out there that trust Eric Sprott a whole lot more than they trust the COMEX.

Bullion vault is mostly flat, while the best premium for 100 oz bars (no COMEX bars, unfortunately) are 18.65%.

Equities moved higher, as did crappy debt, while bonds sold off a bit, as did most of the metals.

Miners continue to look weak; they were one of the worst-performing sectors on the sector map today. The XAU/GC ratio continues moving lower. Are mines closing due to the pandemic? Some refineries have shut down. If this continues longer term, will it affect the ability of people to buy physical gold? Oh yeah. It might even be affecting premiums right now.

Is this a normal market response when Trump announced on Sunday that the lockdown would continue for another 30 days? Man. I don’t know.

The rally of the buck does seem to suggest that confidence in the US pandemic response has improved – a greatly improved testing regime. Government always does the right thing – after exhausting all the other options.

There was a news item that caused the crude oil market to pop a bit intraday: apparently Trump and Putin had a call, and they talked about the oil markets:

“Opinions on the current state of the global oil markets were exchanged. It was agreed there would be Russo-American consultations about this through the ministers of energy,” the Kremlin said.

Will that lead to anything? Trump is torn – he wants cheap gas prices as a stimulus, but he also doesn’t want shale to go bankrupt. Certainly the pop in oil helped both silver and copper recover off the lows.

I suspect the amount of money being poured into the markets by the Fed, via their friends at the banks, is huge at this point. I don’t have specifics, but – theoretically anyway – the Fed’s balance sheet should provide us an insight this Thursday as to how much has been printed to support the markets.

I do think the banksters are buying literally everything, armed with the Fed’s money. If the trades work, they get big bonuses. If the trades don’t work, they aren’t on the hook. A nice trade, if you can get it.

I’m still waiting for that HCQ + Zithro test to complete. Let’s hope the test is conducted by someone who has NOT been promised a very nice job at Big Pharma after “government service.”

Is this a normal market response when Trump announced on Sunday that the lockdown would continue for another 30 days? Man. I don’t know.

Haha, it’s freaking insane is what it is. I’m still clinging to a small S&P short (as I can’t short the miners without a stupidly large spread here in Europe), but maybe I should stop fighting the FED. I feel like I brought a falling knife to a bazooka fight.

I’m also short silver again as the last time the dollar reversed higher early March was not a good time for the metal.

Aussie Update – Well it has been another unpredictable start to the week:

– Tues : Continued the Bear Market Rally of another +3% till midday then turned around to end up -2% Down.  Futures suggest much of the -2% will be erased.  You would not want to be a day trader!

Gold in $AUD looks continues to weaken as the $AUD gains strength while the $USD has been pretty stable.

Check out the https://money.cnn.com/data/fear-and-greed/ index.  Overall it is at Extreme Fear… but this one stand out:

This may be a sane explanation of equities continuing to head higher amid the bad corona news:

There are many pension funds and 401k’s with strict allocation rules by value in relation to stocks and bonds. They typically rebalance their portfolio’s at the end of the quarter – which here means March 31st.

From https://johnonstocks.wordpress.com/ a smart sounding stock investor that I found on wolfstreet.

I think intervention has returned to the gold market.  Gold was pounded through support today – but silver’s response was very interesting.  It followed, but with a much more muted move.

Oh – and I forgot the OI report – it updated late.  Silver’s OI continues to decline.  I’m not saying this is predicting a COMEX default or anything, but the decline in OI remains quite striking.

I was hoping that the Fed would lose control of their 10 year hammer lock on the market.   My little SH position form a couple weeks back is not fairing well right now.

To all you guys, Dave especially, thanks for all the leg work that you put into this each day.  Im not savvy enough to add much, to the discussion, but im glad to have your daily info.

Copper broke out of its downtrend today with a bit of a bang.  HG +3.80%, a big move for copper.  This has helped silver buck the trend of falling gold prices.

This does kinda suggest China is getting back to work.  Even if they don’t have any orders other than ventilators.  And even if decoupling is soon to follow.

Gold was hammered, although the miners are rallying.  Of course they are.

If Chris is right, and I think he is, some day governments and employers (and maybe even lovers) will want to see the results of individuals’ antibody tests showing they’ve been exposed to this Wuhu Flu and are therefore immune. Makes sense to me. So somebody is going to make a fortune on the antibody test kits and someone else on the registry/documentation. How would we go about investing our precious dollars in that coming wave? What companies have the lion’s share of that kind of market now?

23 & me, and the other DNA testing companies.  They would. Of course, they want your data.  I would want a kit that is private like a pregnancy test is.