Gold rallied early in Asia hitting 1699 intraday before changing direction and falling for most of the rest of the day. The bearish harami candle was a reasonably strong bearish reversal (47%), and while forecaster dropped, gold remains in an uptrend. Gold is still in an uptrend in all three timeframes.

Gold/euros plunged -37.73 [-2.43%] to 1512.23 on moderately light volume. The bearish harami candle was a reasonably strong bearish reversal (47%), and forecaster was unchanged and remains in an uptrend. Gold/euros is in an uptrend in the daily and weekly timeframes.

Gold didn’t look great today; some selling might be expected after yesterday’s massive rally, but even with no apparent intervention (the OI actually fell), gold couldn’t sustain its uptrend even with a very large drop in the buck, which is usually gold-positive. 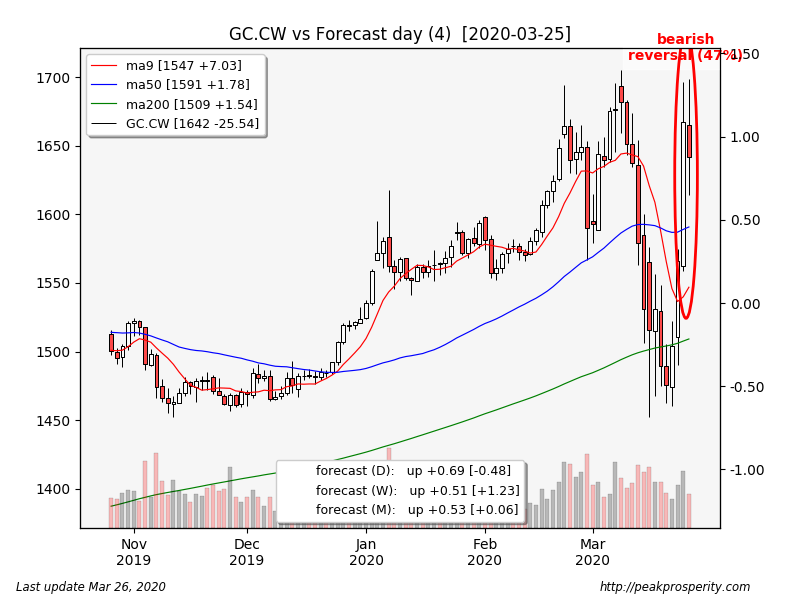 Silver rallied along with gold in Asia, fell back during the London session, but then rallied once more during US trading. The long white candle was a bullish continuation, forecaster dropped, but remains in an uptrend. Silver is in a downtrend in both the weekly and monthly timeframes.

In contrast to gold, silver is looking strong. Open interest continues to drop substantially even as prices rise. That’s a very good sign. 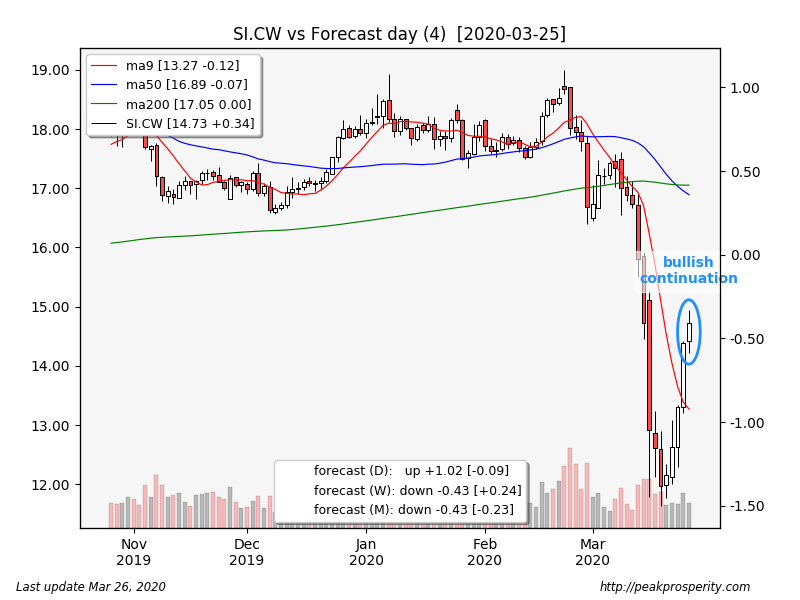 Miners chopped sideways for the first few hours, then broke out to the upside just after lunch, preserving most of the gains intoo the close. GDX jumped +4.61% on moderate volume, and GDXJ rallied +4.17% on moderately heavy volume. XAU moved up +2.97%, the long white candle was a bullish continuation, and forecaster was unchanged, remaining in an uptrend. XAU is in an uptrend in all three timeframes.

The mining shares continue to recover. 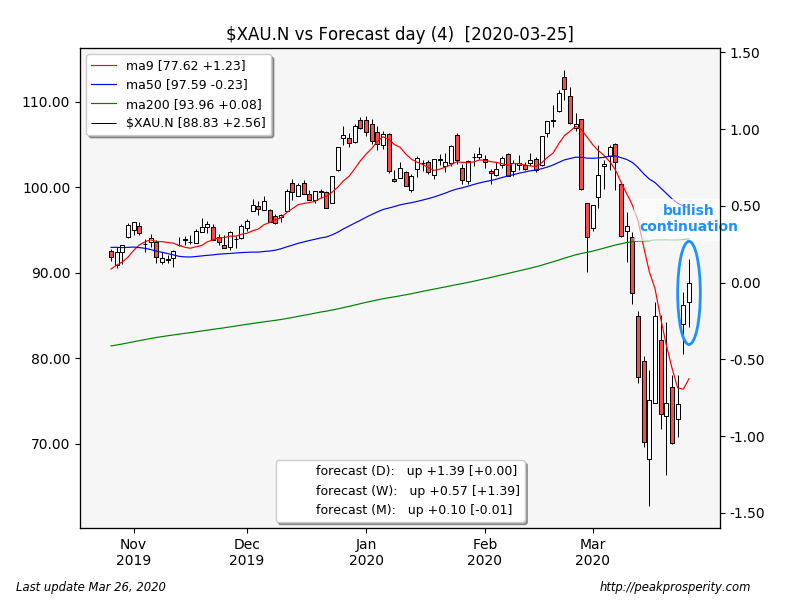 Copper moved up +0.01 [+0.54%] to 2.22 on moderately light volume. The high wave/NR7 candle was unrated, and forecaster climbed, moving higher into its uptrend. Copper remains in a downtrend in both the weekly and monthly timeframes.

Is copper’s brief rally over? We can’t say just yet.

The buck plunged -1.25 [-1.22%] to 101.00 on light volume. The long black candle was a bearish continuation, forecaster dropped, falling into a downtrend. The buck is still in an uptrend in the weekly and monthly timeframes. Toda
y, the buck closed back below its 9 MA, which is a bearish sign.

Major currency moves included: CAD [+2.10%], EUR [+0.83%], GBP [+1.15%]. These were more huge moves in the currenc
y markets; it is hard for me to track what might be causing prices to move around this much, but it sure looks as though the buck is now heading lower. Maybe it’s that 2 $Trillion stimulus package. 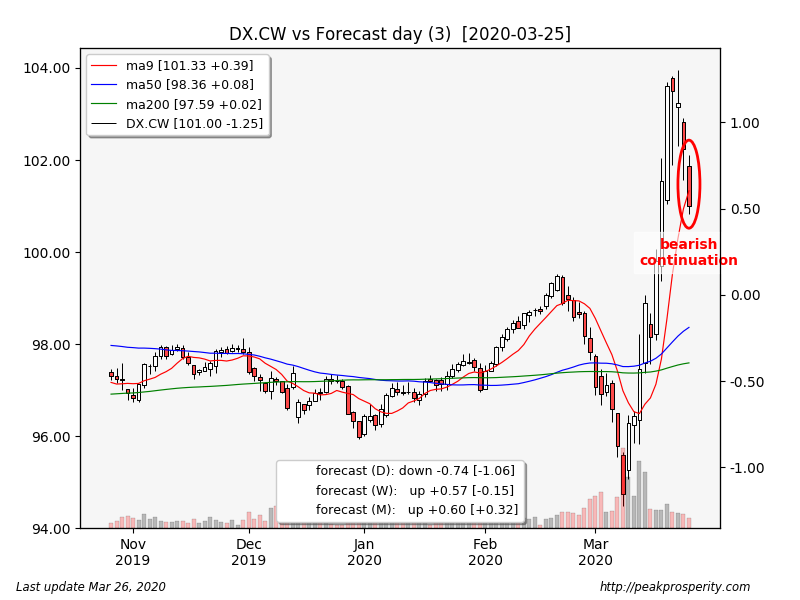 Crude moved up +0.34 [+1.30%] to 26.52 on moderately light volume. The doji candle was a reasonably strong bearish reversal (44%), forecaster was unchanged and remains in a slight uptrend. Crude is still in a downtrend in both the weekly and monthly timeframes.

As with copper, crude’s brief rally may be over. 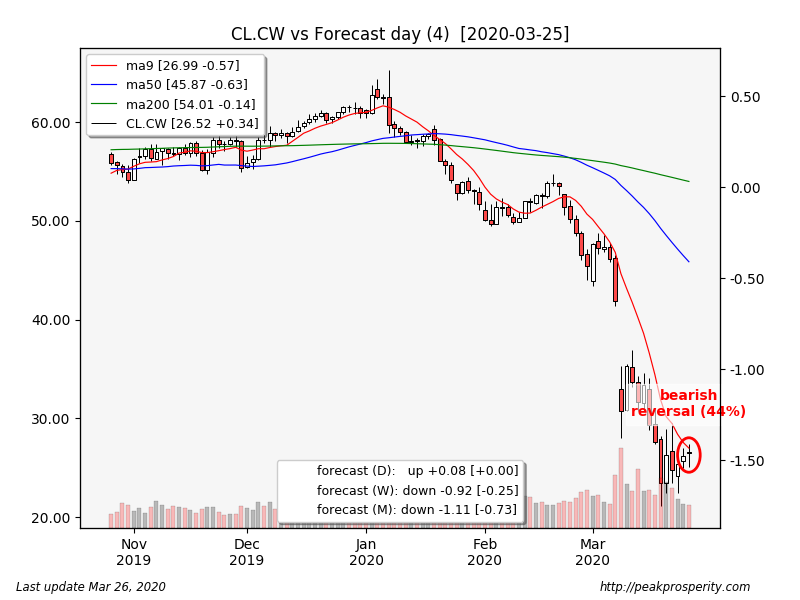 SPX moved up +28.23 [+1.15%] to 2475.56 on moderately heavy volume. The high wave candle was a bullish continuation, and forecaster climbed, but remains in a downtrend. SPX is in a downtrend in all three timeframes. Intraday, SPX did well for much of the day, but sold off hard (-80 points) in the last 20 minutes of trading. That’s not a great sign.

No reversal yet for SPX – at least not from the forecaster anyways. 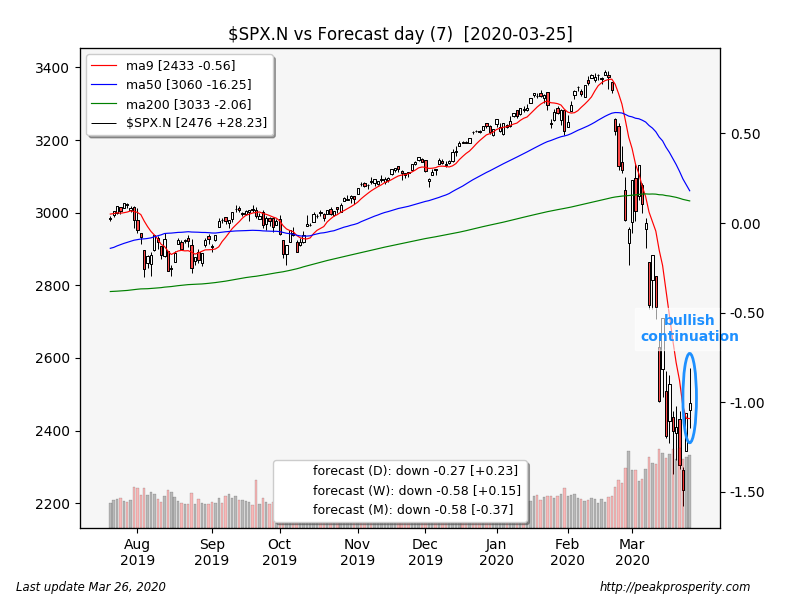 Bonds remain in an uptrend.

JNK rallied +2.36%. The spinning top candle was a possible bearish reversal (36%), but forecaster climbed, rising into an uptrend. JNK is back in an uptrend in the daily timeframe. 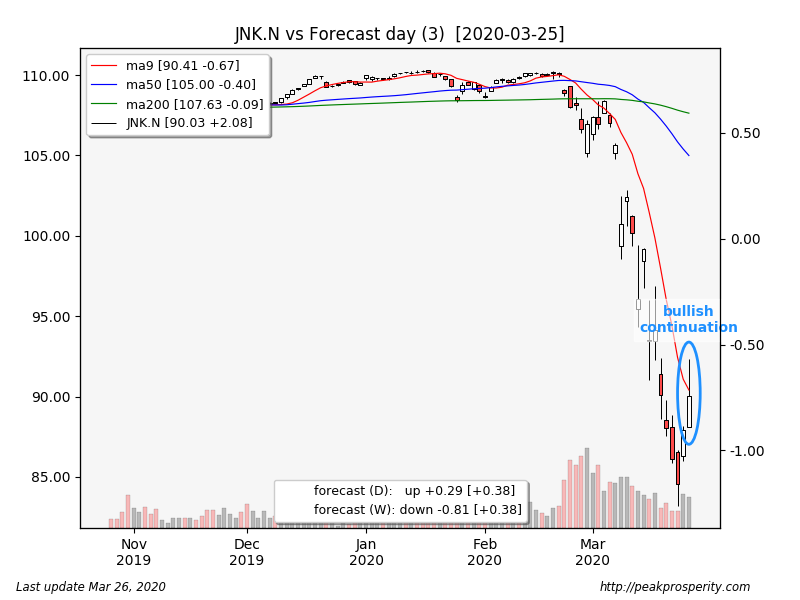 The BAA.AAA ratio continues to climb, up another +9 bp just today to +159. I looked more closely into the reason for the rise; it was not because the semi-crappy debt was being sold, but rather, because the AAA-rated debt was being purchased. The big move happened on Monday, immediately after Infinite QE was announced by the Fed. In the last 2 days, yield on BAA debt fell -12 bp [to 5.03%], while yield on AAA debt fell -68 bp [to 3.44%].

This suggests the strong breakout in the ratio (which would normally signal a panic out of the crappier BAA debt) was just an artifact of Fed intervention and, probably, an increase in leverage. The trade: borrow money at 0% from the Fed, to buy AAA-rated debt at 3.44%. Pocket the difference in yield.

After several days of movement higher, the premium for silver at BV is finally gone. The cheapest 100 oz silver bar on the list: +18.57% premium.

Tuesday’s rally in risk assets continued through most of Wednesday – right up until the last 25 minutes of trading, when SPX sold off hard, losing most of the day’s gains. It looks like traders didn’t trust the rally very much at all.

Crude and copper both look a little iffy – perhaps copper looks a bit stronger than crude.

Gold’s drop today – just a brief pause before the big breakout? Or is this the top? Dunno. Given the dollar’s large plunge, gold sure should have done better.

Silver looks strong; it continues to move steadily higher, and open interest keeps dropping. It sure looks as though the shorts are bailing out even as price moves higher. That gold/silver ratio continues to unwind. I think silver is still a great deal down here at 14-and-change, but only paper silver (or semi-paper, like PSLV) is available at the COMEX SI price.

The dealer I know – mostly sold out, with silver eagles priced at $24.

In Asia, SPX has continued to move lower, as has gold, copper, and crude.

So – bear market rally in risk assets? It sure looks that way at this moment. We will have to see what the market shows us tomorrow.

Nice report on Markets, however I want to see the GOFO gold graph which should indicate that gold is in backwardation as the premiums are getting higher. This graph is only available to dealers it seems. Have you seen the GOFO graph PM,s?

Interesting perspective from Perth Mint on the Gold/S&P500 ratio – http://www.perthmintbullion.com/au/blog/blog/20-03-26/Why_you_should_carefully_watch_this_one_ratio_as_market_volatility_escalates.aspx

I used to chart GOFO until they discontinued the data set about 5 years ago.

Thurs in Asia was mixed with some bourse up, others down.  Opening in Europe is weak.

This ratio (SPX/GC) has the second-strongest negative correlation to gold.  That is, when the ratio is falling, that’s gold-bullish.

This is why – I believe – the gang in charge likes to keep gold from rallying too hard. 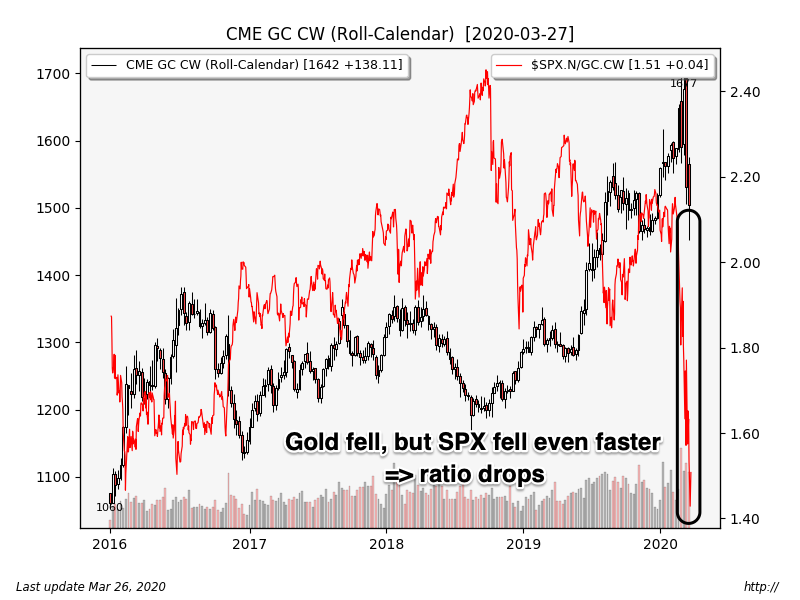 Also being in Oz, we have the interesting complication that Metals are priced in USD, yet we are a big gold producer and changes in the USD $Gold price normally impacts the USD/AUD exchange rate.   Historically, this buffers the volatility of the Gold Price in AUD… but has you can see from the charts below, A$Gold has had a big run up compared to US$Gold and the shape of the two charts is different.  Silver is a different story.  While the shape of the curve is similar on Silver between $US and $AU, the % value variation is much less in AUD than what you are seeing in USD. 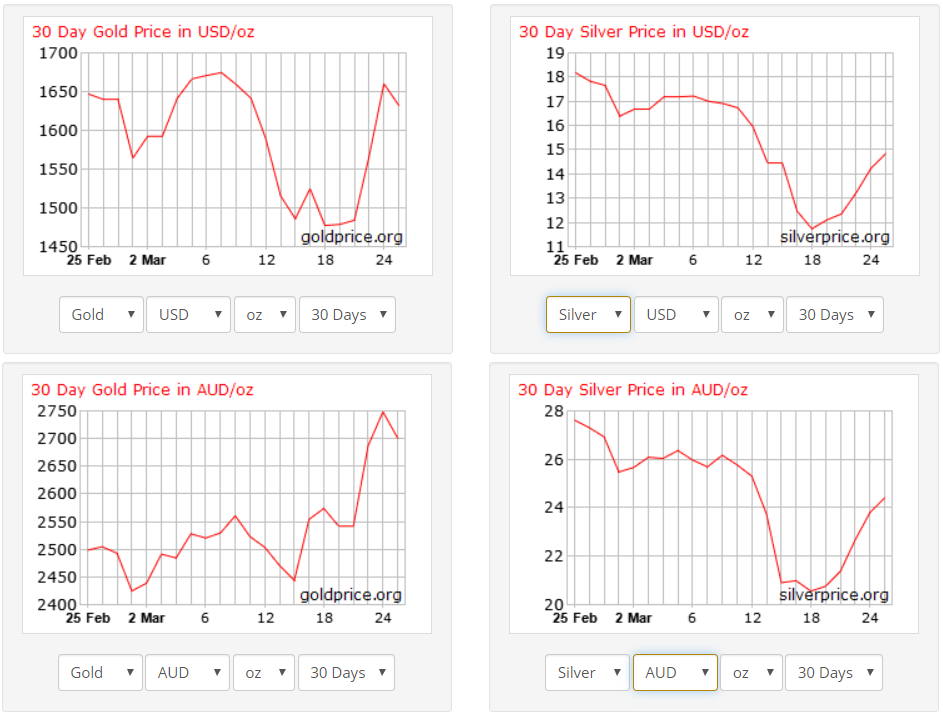 I think the SPX/GC is going to keep falling (with S&P 500 still trending down and the Gold trending up) and likely to fall back under 1.  For me I also need to think about the USD/AUD ratio.

I tend to agree it is a bear market rally.  This is from Zero Hedge (for what it is worth) but I can not see a 6 month rally like in ’29.  People are funny however, as an example plenty of people are buying Qantas as it is “Cheap”.

There’s a flaw in the whole ZH chart:

Back then, all the Fed could do was drop rates.  We were on a gold standard.  The government was very hands-off.

None of that is true today.  Government is “borrowing” 2 trillion dollars, and handing it out, with the new debt monetized by the Fed.

Do we think we will see deflation this time around?

In 1929, it took USG literally 3 years to print, via devaluation vs gold, and to start government spending to limit impact of the deflationary crash.

In 2020, The deflationary crash hasn’t happened yet.  No bank defaults, no bond defaults – the Fed is printing like mad to avoid this very outcome.

As a result, the chart will – most probably – not look the same.

Also, our forcing function right now is a pandemic.  What happens when we get a treatment?  Forcing function is removed.  How will that change things?

We might skip deflation and move right into inflation and/or a collapse in confidence due to a Fed over-reaction to the deflationary threat.