Gold rallied in Asia, but it really took off during London hours, eventually peaking at 1698 just before 7am. The opening white marubozu candle was a bullish continuation, forecaster climbed, moving higher into its uptrend. Gold is in an uptrend in all three timeframes. Gold appears ready to break out to new 7-year highs.

Gold/euros jumped higher +93.43 [+6.41%] to 1549.96 on moderately heavy volume. The opening white marubozu candle was a bullish continuation, forecaster climbed, moving higher into its uptrend. Gold/euros is now in an uptrend in the daily and weekly timeframes. Today marked a new all time high for gold/Euros, as well as a new all time closing high.

Silver tried to rally in Asia but largely failed, but then moved steadily higher through end of day, closing at the highs. The long white candle was a bullish continuation, forecaster climbed, moving higher into its uptrend. But even after today’s very strong rally, silver remains in a downtrend in both the weekly and monthly timeframes. 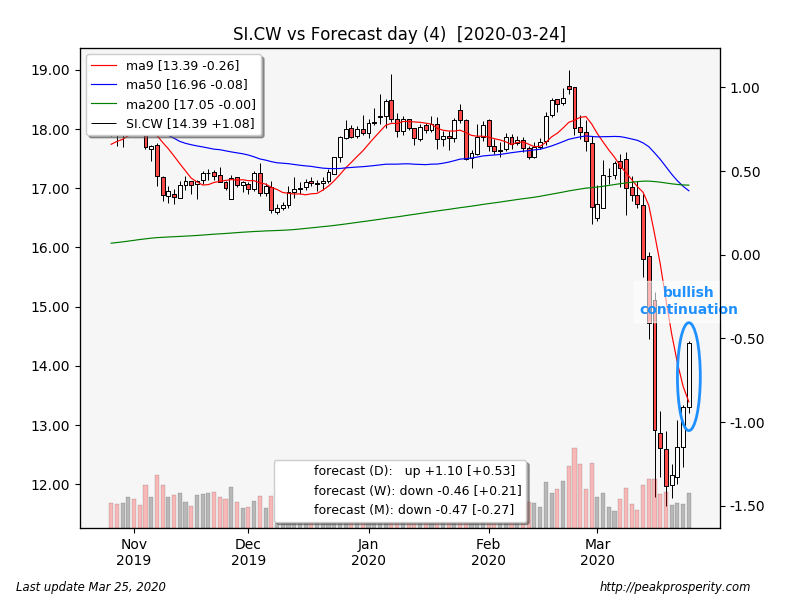 Miners gapped up big at the open, fell in the first hour, rallied throughout most of the day, and then dropped sharply at the close. GDX jumped +14.68% on moderately heavy volume, and GDXJ rose +18.69% on very heavy volume. XAU moved up +15.55%, the confirmed bullish nr7 candle was a probable bullish reversal (54%), forecaster climbed, rising into an uptrend. XAU is now in an uptrend in all three timeframes. Miners are now back above the 9 MA also, which is a positive sign. 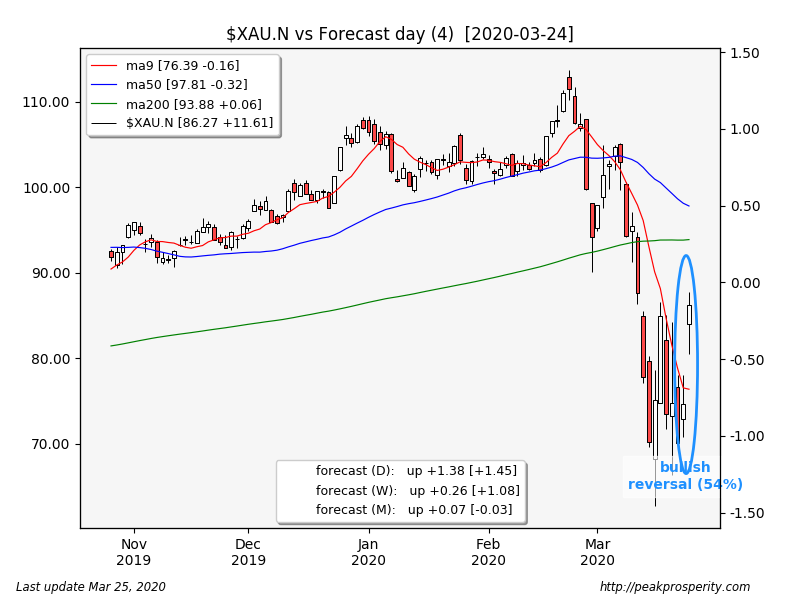 Copper jumped +0.10 [+4.58%] to 2.20 on moderate volume. The confirmed bullish spinning top candle was a probable bullish reversal (53%), forecaster climbed, rising into an uptrend. Copper remains in a downtrend in both the weekly and monthly timeframes.

The buck fell -0.99 [-0.96%] to 102.25 on moderately light volume. The swing high candle was a likely bearish reversal (62%), forecaster dropped, but remains in an uptrend. The buck is in an uptrend in all three timeframes. 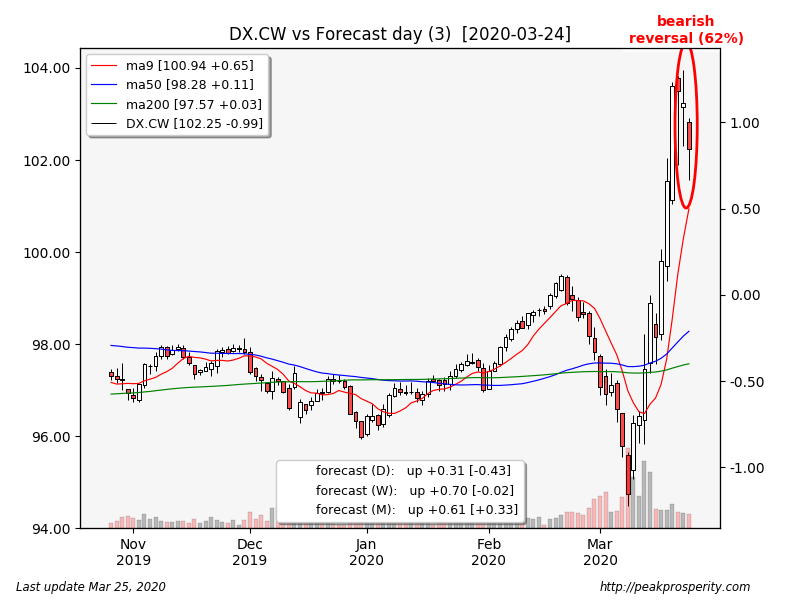 Crude moved up +0.78 [+3.07%] to 26.18 on moderately light volume. The confirmed bullish nr7 candle was a reasonably strong bullish reversal (46%), forecaster climbed, rising into an uptrend. Crude remains in a downtrend in both the weekly and monthly timeframes.

SPX raced higher, up +209.93 [+9.38%] to 2447.33 on moderately heavy volume. The swing low candle was a likely bullish reversal (68%), but while forecaster climbed, it remains in a downtrend. SPX is still in a downtrend in all three timeframes. For whatever its worth, it was a highly rated swing low pattern today.

JNK jumped up +4.00%. The swing low candle was a likely bullish reversal (60%), forecaster climbed, but remains in a downtrend. JNK is still in a downtrend in both the daily and weekly timeframes.

The BAA.AAA ratio absolutely screamed higher – this was on Monday, as the data is one-day delayed – jumping +69 bp to a heart-stopping 150 bp in just one day. What does this mean? Well, this +150 level was reached in 2008, in 2012 (during the Eurozone crisis), in the not-recession of 2016, and its happening right now. A break above 150 bp is the sign of impending default of a bunch of semi-crappy debt (i.e. BAA corporate debt). We are on the precipice of doing exactly that.

The prospect of widespread defaults in the massive semi-crappy debt market is what keeps the Fed up at night. If this ratio continues to scream higher, eventually this will lead to redemptions on those bond funds, which will eventually shut down redemptions and/or “break the buck” if they are money market funds.

You might take a look at where your cash happens to be. What does your money market fund own? How about your “intermediate term bond fund.” Any semi-crappy debt in there? Things are starting to get serious. 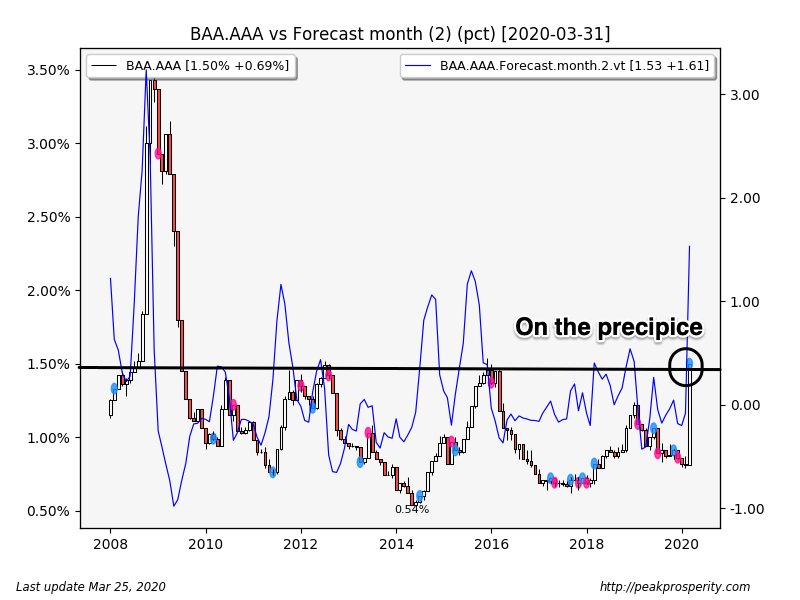 Spreads for silver at bullion vault remain very wide, and premiums above spot are also wide. PSLV is back in discount after today’s huge silver rally. Shortages of physical silver remain.

Today pretty most everything raced higher – gold, equities, platinum, palladium, silver, miners, and even crappy debt. Bonds fell, but not all that hard. Was this a delayed reaction to the Fed’s Infinite QE? Or is the market looking ahead to the stimulus bill, which is at this point projected to cost $2 Trillion dollars. That comes to $6,250 per man, woman, and child in the United States.

Are you getting that money? You know the answer already. “Normal people” get $1200 each. Where’s your other $5k? Well, presumably, your $5k goes off to the donor class. As George Carlin said, “Its a big club…and you ain’t in it.”

And with the already-announced Infinite QE, the Fed will make sure to monetize as much of that $2 Trillion as necessary, all under the heading of “keeping stability in the markets.”

I’d like to say this was “QE for the People” – mostly, it’s QE for the Donor Class, with some table scraps trickling down to individuals like you and me.

It is interesting, though, that after all the fuss, equities remain in a downtrend, while the vast majority of other sectors have jumped back into uptrends.

Is this the low for risk assets? It is too soon to tell at this time. The thing about a sharp downtrend is, the reaction rallies (that typically last from 1-3 days) are often quite violent, and are usually triggered by “good news” government interventions.

In spite of the reaction to the “good news” of QE for the Donor Class, I think the only thing that ends this downtrend is the prospect of something that can actually mitigate the pandemic.

Which may be forthcoming. It is just really hard to know.

Late updates to the OI reports:

I can’t say how astonished I am by seeing the OI actually DECLINE during a time when both gold and silver scream higher.

Not only was there no suppression, it looked as though the commercials may actually have been covering as price rallied strongly.

We will just have to keep an eye on this and see if it continues.

FYI – Here is our perspective In OZ for Gold and Silver vs the US.  For us Gold is performing well, and Silver is still a dog over the last month.  Gold for us is funny as it directly impacts our exchange rate (so they tend to buffer each other making AUD/Gold more stable than other crosses).  So far my pivot to gold (from Silver, Plat and Cash) has worked out OK.  I have NO idea if that will hold as I’m not in “the club” and don’t get the memo on what the next bazooka holds. 😉

This is what scares the poop out of me from a main street view.

Fook Me.  Mega $2T Bazooka fired…. and Europe Equities & US futures are falling post their bounce.  Time to get serious and load up the Super Duper Utlra Full Auto Bazooka.  Only a week ago I was joking about a Sun pre market Bazooka but it seems we need one every second day.  At this rate…….

You aren’t giving financial advice…. but do you think this is this a good time to buy call options on gold and silver?  If so, which ones might be good to consider?

What is BAA corporate debt? I’ve heard of BBB, BB, AA, etc, but not BAA. I think it must be a terminology issue.

Its a timeseries from FRED:

Yeah…I’m not sure this very moment is the right time to buy calls.  They are finicky things.  Then again, my skill at options is limited.  I usually lose money.

But if you put a gun to my head…there are calls on GC futures, but of course that will require no default at COMEX.  IV has dropped.  We’ve had a retracement.

Don’t know if anyone would want to use me as an indicator but FWIW I exited half of my junior miners (to my default euros) this afternoon wondering if this already powerful bounce has a 3rd day in it?

Dave, as a software engineer you may not have a huge amount of respect for Bill Gates in general, but I think he summed up my view pretty well today:

‘There really is no middle ground, and it’s very tough to say to people, “Hey, keep going to restaurants, go buy new houses, [and] ignore that pile of bodies over in the corner. We want you to keep spending because there’s maybe a politician who thinks GDP growth is all that counts.” ’

Ignoring the ad hominem at Trump, who’s policy of reopening for business at Easter would help a lot of workers, or at least those that won’t have family members affected.

I still think when push comes to shove the US will sacrifice GDP (and share prices) for elderly lives, even if only, as you point out, because some of those lives are of the elites pulling the levers.

No increase today as far as I saw of prospects of something that can actually mitigate the pandemic.

Seems like there is another way to keep the CFR to 0.4%:

Data from Germany shows just 0.4% of people who tested positive for the virus have passed away, much less than the 9.5% in Italy and 4.3% in France. In the Netherlands growth in transmissions of the virus have slowed significantly.

I hope the US manages the same, but from what I’ve read about mismanagement and the foothold in NY, that sounds optimistic from where I’m quarantined.