Market-moving news of the day was from the Fed, which announced an Unlimited QE program at 8AM Monday morning. This resulted in an almost-instant jump of 7.7% in SPX, and smaller spikes in gold, silver, crude oil, copper, and treasury bonds. However, things looked quite different by end of day.

Gold chopped mostly sideways until the Fed’s announcement at 8am, after which it spiked higher, and then continued to rally until early afternoon. The swing low candle was a likely bullish reversal (65%), forecaster climbed, moving higher into its uptrend. Gold is in an uptrend in the daily and monthly timeframes. Gold is now back above both
the 9 and 50 MA lines.

Gold/euros shot up +48.63 [+3.45%] to 1456.54 on moderate volume. The long white candle was a bullish continuation, forecaster dropped, but remains in an uptrend. Gold/euros is in a downtrend in both the weekly and monthly timeframes.

This was most likely a reversal for gold, thanks to the Fed. 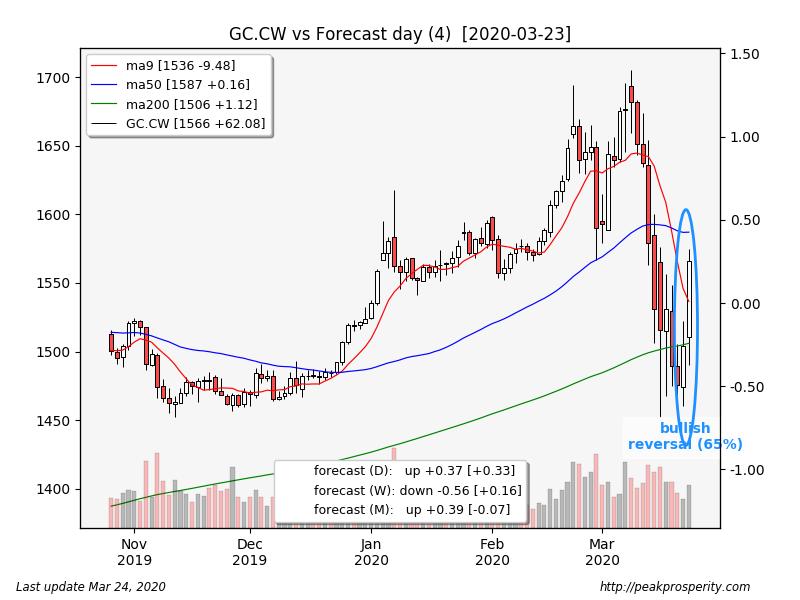 Silver spiked higher at 8am along with gold, then spiked up once more in early afternoon. The long white candle was a bullish continuation, and forecaster climbed, rising into an uptrend. Silver is in a downtrend in both the weekly and monthly timeframes.

COMEX SI open interest fell -769 contracts. Current open interest for SI: 90% of global annual production, down -0.44% today. Note: no shorting at all happened on this reversal. I take that as a very positive sign.

This is probably a bullish reversal for silver too. 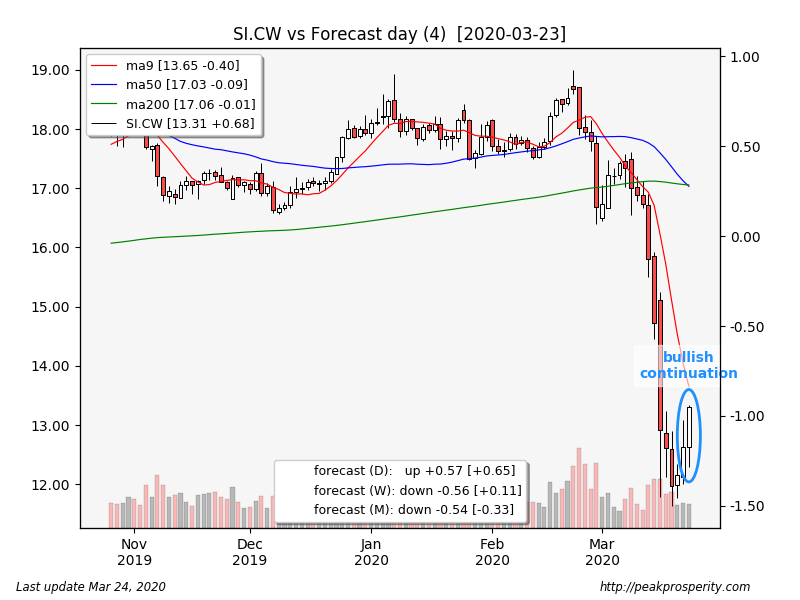 Miners gapped up at the open, rallied for most of the day, but then sold off fairly hard in the last 30 minutes of trading. GDX rallied +6.72% on moderate volume, and GDXJ jumped +9.77% on moderate volume. XAU rose +6.47%, the spinning top candle was a possible bearish reversal (35%), and forecaster climbed, but it remains in a downtrend. XAU is in a downtrend in both the daily and weekly timeframes, and is in a state of no-trend on the monthly.

No reversal yet for the miners. I’m not sure what that end of day sell-off was all about; perhaps they were dragged lower by the bad close in SPX. 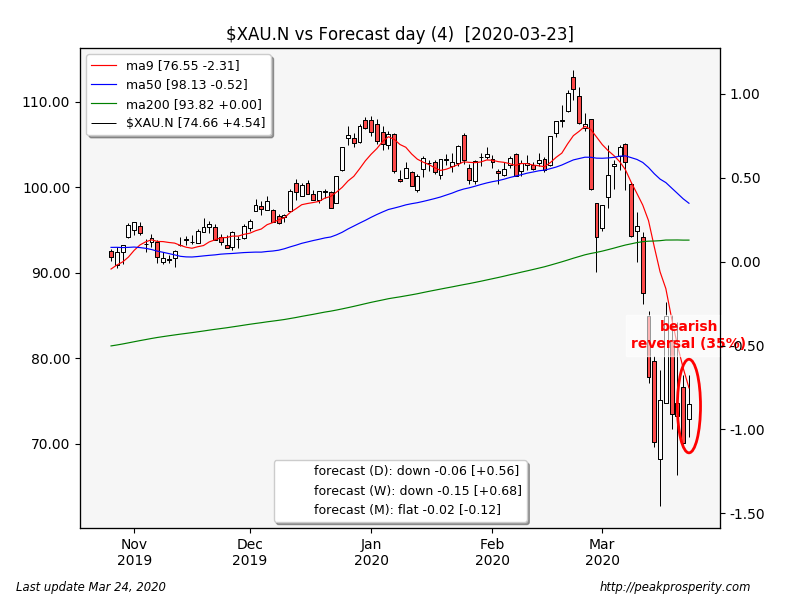 Copper fell -0.04 [-1.84%] to 2.11 on moderately light volume. The spinning top candle was a bearish continuation, forecaster climbed, but remains in a downtrend. Copper is in a downtrend in all three timeframes. No reversal at all for copper. 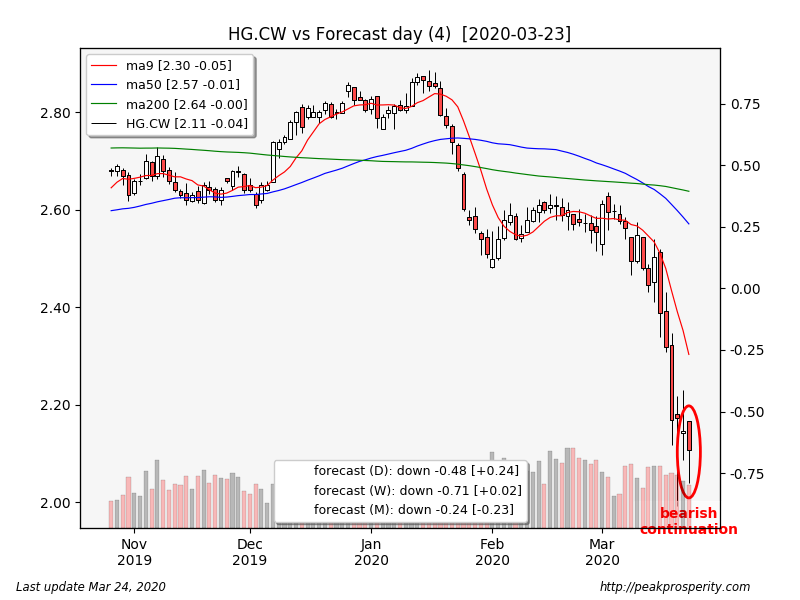 The buck fell -0.26 [-0.25%] to 103.24 on moderately light volume. The doji candle was a possible bearish reversal (37%), but forecaster climbed, moving higher into its uptrend. The buck remains in an uptrend in all three timeframes. That’s probably not a bearish reversal yet for the buck. 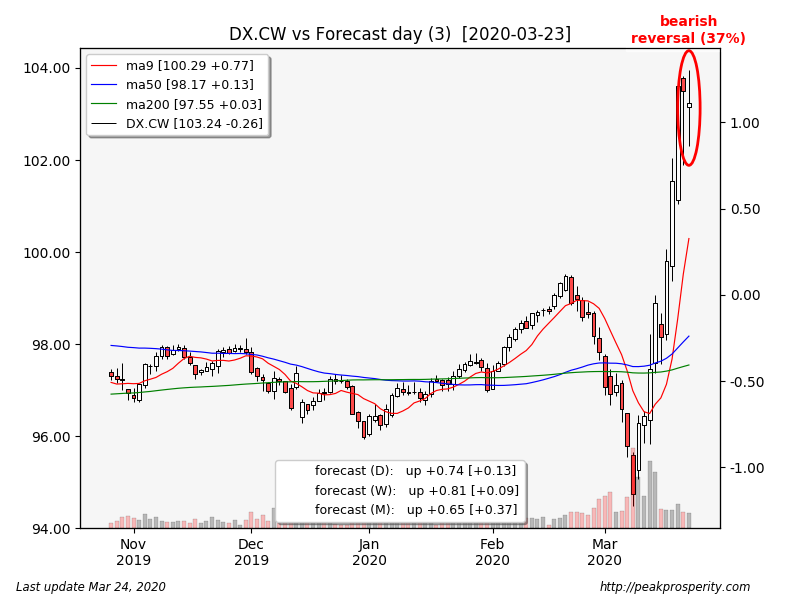 Crude moved up +0.67 [+2.71%] to 25.40 on moderately light volume. The long white candle was a probable bullish reversal (50%), forecaster inched higher, but remains in a downtrend. Crude remains in a downtrend in all three timeframes. If crude is putting in a low here, it is turning out to be “a process” rather than just a one-day affair. 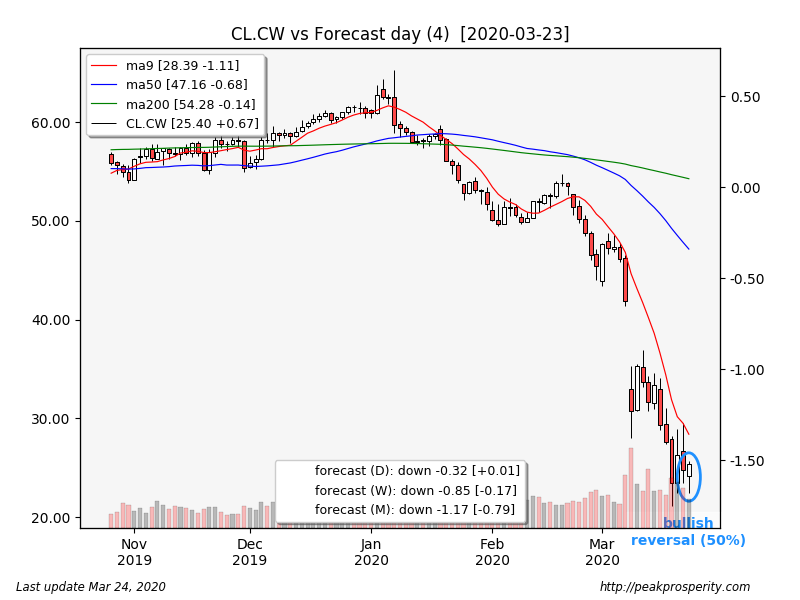 SPX fell -67.52 [-2.93%] to 2237.40 on moderately heavy volume. The long black candle was a bearish continuation, forecaster dropped, moving deeper into its downtrend. SPX remains in a downtrend in all three timeframes. No reversal at all for equities. 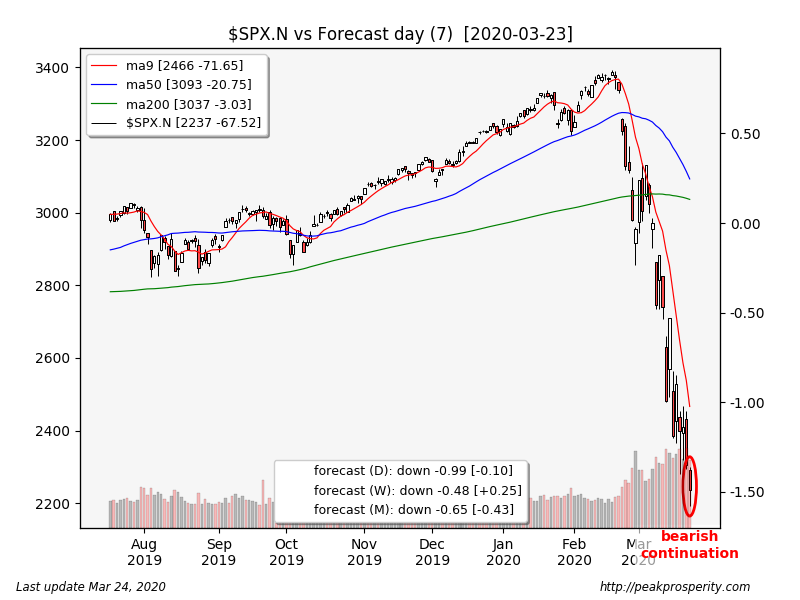 TLT jumped +4.12%. The long white candle was a bullish continuation, forecaster climbed, moving higher into its uptrend. TLT is in an uptrend in the daily and weekly timeframes. The 30-Year yield fell -20.0 bp to +1.35%.

JNK dropped -1.82%. The opening black marubozu candle was a possible bullish reversal (32%), forecaster climbed, but remains in a downtrend. JNK is in a downtrend in both the daily and weekly timeframes. While BAA debt seems to be more attractive, that’s not true for crappy debt, which continues to make new lows. That goes along with the new lows for SPX: risk off. 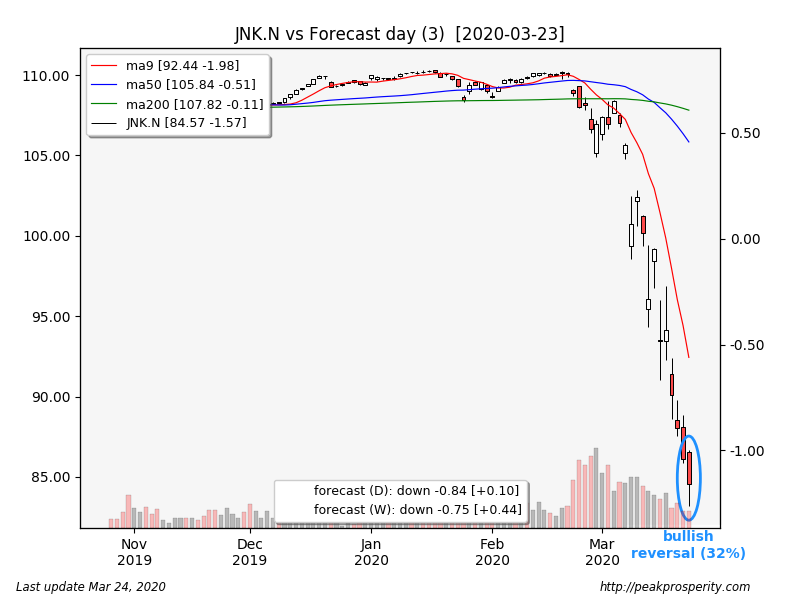 The BAA.AAA ratio plunged -18 bp last week, moving dramatically down off its highs. While I don’t know why this happened, it is positive news from the standpoint of marketplace fear – it means money is feeling safer about moving into lower-quality corporate debt. Note: this is a weekly chart, not a daily chart. 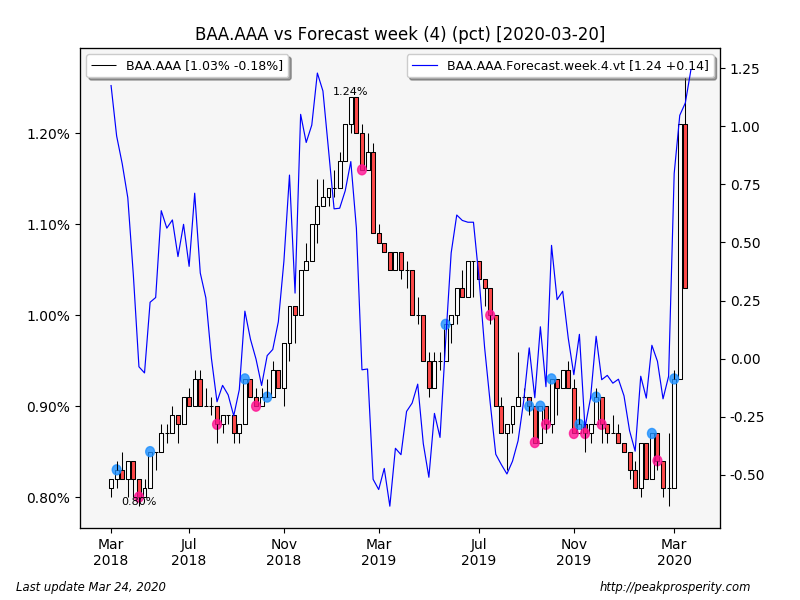 Today’s sharp rally in silver has eliminated the PSLV premium; while a large premium remains in place for silver at BV, gold has actually moved into a relatively sharp discount. [This is as of roughly 12 midnight EST].

While Congress fights over which of their donors receives the maximum possible cash grants during this time of troubles – presumably while providing some table scraps to the working public – the Fed was not burdened by such limitations.

Wolf Richter has done the heavy lifting on analyzing the Fed’s latest actions, providing us a long list of acronyms, behind each sits tens of billions of dollars. It sums to: “The Fed is making sure that nothing can possibly fail” and this is being done (largely) at taxpayer expense. One of the fun items was the PDCF: lending to banks so that they can buy up all the just-above-junk debt, so the Fed doesn’t have to.

Gold and silver (gold-and-silver?) seemed to really like the Fed’s announcement. The prospect of zero rates, and lots of money printing (and the prospect of lots of free money handed out by the Federal government to everyone and everything in sight – let no crisis go to waste – all monetized by the Fed) seemed to lead people to conclude that perhaps its time to own something that can’t be printed.

Chris has always maintained “QE for the people” is the next big event to happen in a reflation. Is this just about to happen? Certainly, a direct-deposit of cash from the US government in everyone’s account, with the Treasury bills funding that deposit essentially purchased by the Fed, would seem to check that box. While the authorization from Congress has yet to be passed, the question really seems to be how much, rather than if this happens.

One detail in the action today that I liked: even with the sharp rally in silver [+5.38%], the open interest continued to fall. I think we are at or near a long term low. People will (hopefully) remember the chance they had to pick up silver at $12/ounce far into the future. Short of a Great Depression II, I think it is unlikely we will see that price level agin.

And if the Fed gets away with monetizing these government grants without the dollar cratering, they’ll no doubt do it again. And perhaps again. And once more.

Ok. Any sign of that risk asset reversal I’m looking for? No sign yet. When the equity market falls on what should be good news, that’s a very bearish market. Unlimited money printing was good for a 3-hour rally in equities, and that was it. Crappy debt looked pretty bad also, making a new low. If hydroxychloroquine is going to save the day, so far, the good news hasn’t made it to the equity markets.

Crude did seem to rally even though both SPX and copper fell. The candle code sure liked today’s print for crude; is it a leading indicator? Or just a dead cat bounce?

Thank you Sir. I’ve read your posts for years and really appreciate your insight and skills…Wilco

I too look forward to the updates and thanks for the work. 🙂

“Free” money works!  Everything is going up! …. just don’t look out the window at main street.  Our unemployment (in Oz) just doubled this week to 10+%.

Silver is up $0.96.  Some of you might remember me talking about $1 daily moves in silver.  I think we might just be there.

I think gold is sending a signal here.

Silver is up $0.96. Some of you might remember me talking about $1 daily moves in silver. I think we might just be there.

Don’t forget we had at least one of your dollar days in the early March drop.

I think gold is sending a signal here.

Agreed, looks like lots of market participants want some exposure to something negatively correlated to paper currencies, I’m assuming after the FED announcement of unlimited QE. I’m not convinced corona will actually push it that far, and read it more as a jaw-boning stop gap they felt forced into because congress didn’t come through with fiscal measures on the weekend.

With gold up more than 100 dollars / 7% as of writing and the GSR actually increasing at the same time(!!!), I think silver is also sending a signal here. Something like, “I’m still the ugly stepchild being dragged up kicking and screaming by gold and if no corona treatment news if forthcoming I’m going to show you my industrial oversupply side, so beware!”.

FD: I’m long miners and hold some PHYS and PSLV so don’t get me wrong, I’m currently positioned alongside many of you and am also enjoying this little ride up. But after GDX turned so dramatically after reaching the 2016 highs I’m sold on the theory that the rest of PM complex aren’t going to be following gold up and that golds many safe haven buyers will be exiting again before we get to new highs.

I have two major cable channels I use regularly for precious metal values that are very different with one showing $1590 range and with the other showing $1668.

I went to two trusted gold price sources and both had the same strange differences in price.

I wonder what the explanation for this is?

Strangeness indeed occuring, bullionvault showing gold <$1600 and kitco showing it above $1650, but with a flash crash down and then back up $90?!?

I use the COMEX GC contract, and it shows a steady move higher today.  No odd dips, etc.  Currently trading at $1675.  Gold tipped $1698 earlier today.

The difference with silver “this time” is that the shorts have all covered.  That – theoretically – should mark a real low.  If this were a deflationary event, I’d agree with you about how silver would perform, but I think we’re going to see an inflationary event instead.  Lots more money, but not many new products to chase.

And if it works once, they’ll do it again.