Gold chopped steadily lower for most of the day. The spinning top candle was a bearish continuation, forecaster climbed, but remains in a downtrend. Gold is in a downtrend in both the daily and weekly timeframes. Given the incredibly strong move higher in the buck today, gold’s minor loss was just a currency effect. And then some.

Gold/euros climbed +9.08 [+0.66%] to 1382.87 on moderately light volume. The spinning top candle was unrated, forecaster climbed, rising into an uptrend. Gold/euros is in a downtrend in both the weekly and monthly timeframes. 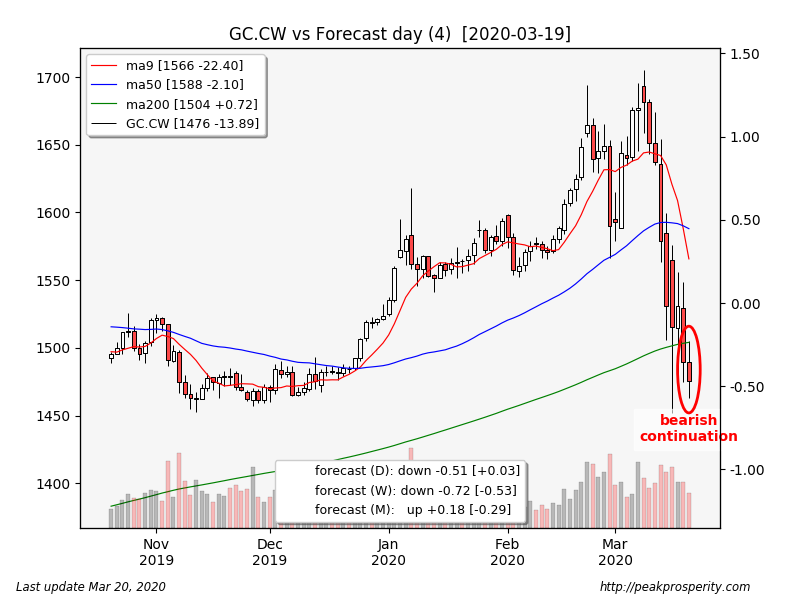 Silver rallied +0.18 [+1.50%] to 12.15 on moderately light volume. The bullish harami candle was a bearish continuation, forecaster climbed, but remains in a downtrend. Silver is in a downtrend in all three timeframes.

But still no reversal for silver – not the forecaster, and not the candles. 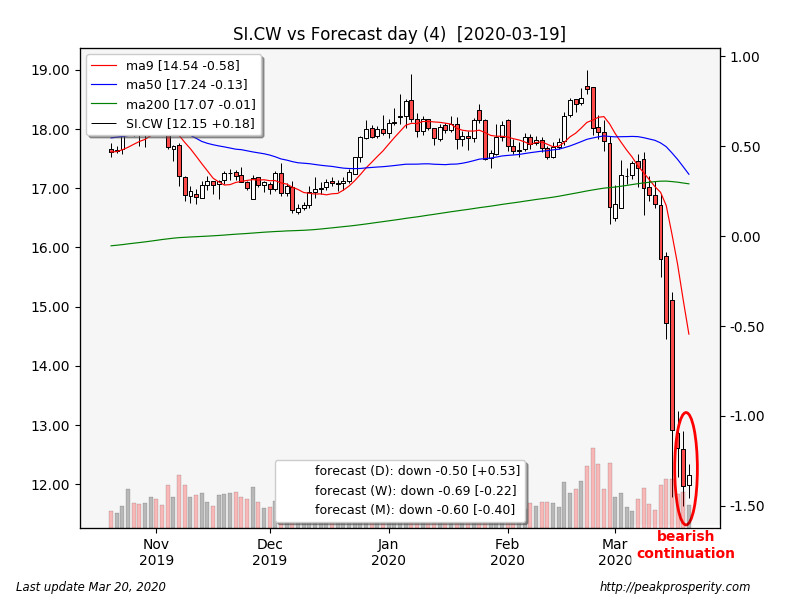 The miners rallied very strongly for most of the day, but then sold off sharply in the last half hour of trading, losing most of the day’s gains. But even with the huge losses at end of day, the miners still did well by the numbers. GDX rallied +8.08% on moderate volume, and GDXJ moved up +3.90% on moderately heavy volume. XAU rose +1.87%, the long white candle was a possible bullish reversal (39%), forecaster climbed, moving back into an uptrend. XAU remains in a downtrend in both the weekly and monthly timeframes. 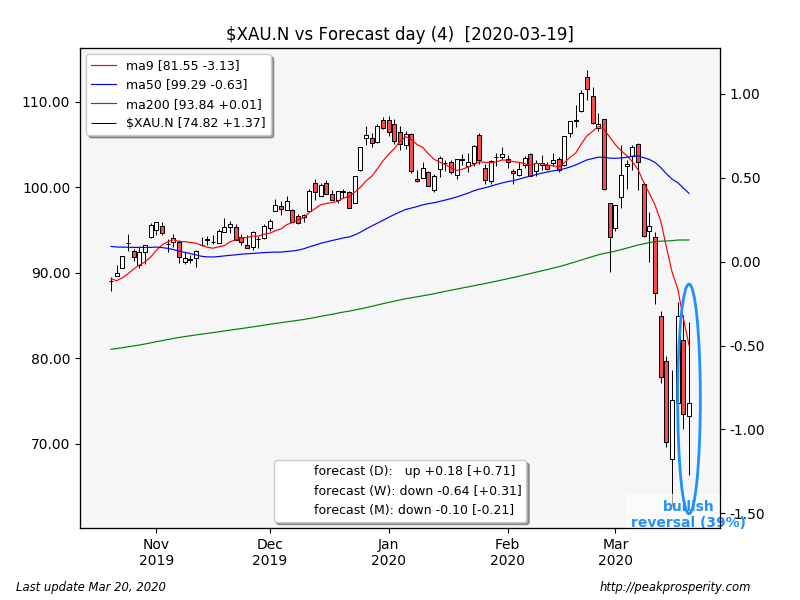 Copper inched up +0.00 [+0.21%] to 2.17 on moderate volume. The doji candle was a reasonably strong bullish reversal (40%), forecaster climbed, but remains in a downtrend. Copper is in a downtrend in all three timeframes.

This doesn’t sound like much excitement, but if you look at copper’s chart, it sold off really hard in Asia, and was down more than 5% at one point before rallying back very strongly, erasing all its losses. Normally doji candles are pretty weak – this doji had the most bullish rating possible.  I think – copper might have made a low today. 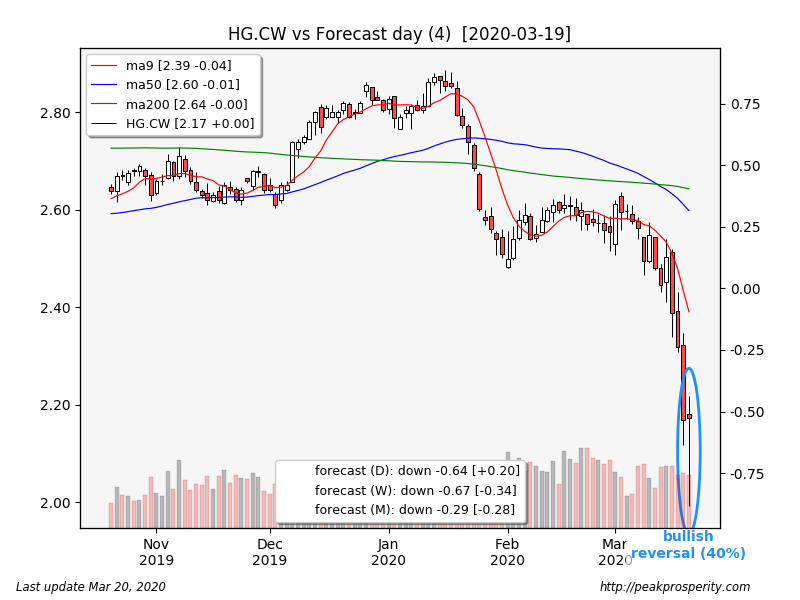 The buck shot up +2.07 [+2.04%] to 103.61 on moderate volume. The white marubozu candle was a bullish continuation, forecaster dropped, but remains in an uptrend. The buck is in an uptrend in all three timeframes. Today, the buck broke out to a new high that was last seen back in 2003. Money continues to race into the buck.

It is a truism in the goldbug world that the dollar is always right on the edge of turning into confetti. This makes sense from a “quantity of money” standpoint, but that theory does not seem to properly explain how the world really works. If the theory had explanatory power, the buck would have turned into confetti long ago.

In reality, I believe the value of money is all about confidence. Currently, the buck is viewed by the world as a safe haven, and so, capital rushes here at top speed when things in the rest of the world start looking iffy. If the world stops viewing the buck as a safe haven – at that point, it becomes confetti.

Interesting pattern. CAD liked the oil rally, AUD liked the fact copper didn’t drop further, but EUR made a dramatic new 3-year low (a 1.06 handle) – why? I’m just guessing: ECB is out of bullets, and has been out of bullets now for years. 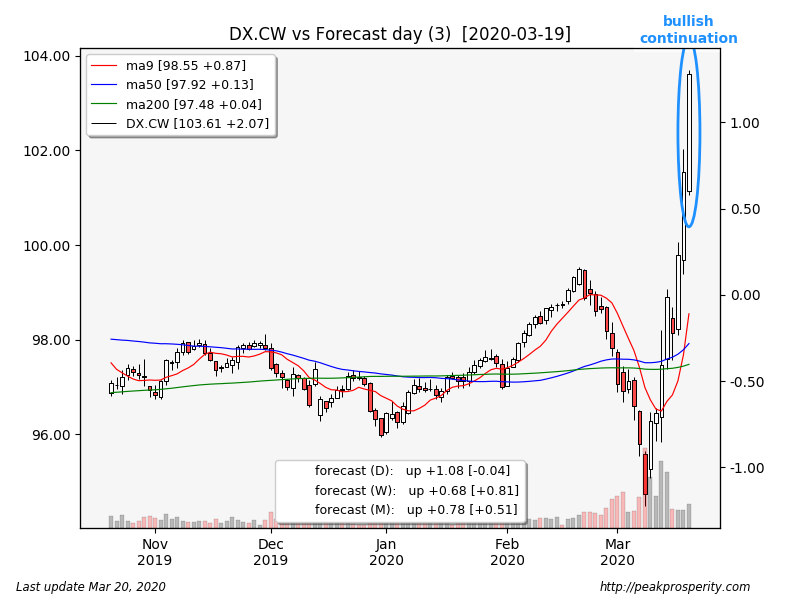 Crude moved strongly higher +2.84 [+12.10%] to 26.31 on moderately heavy volume. The bullish harami candle was neutral, forecaster climbed, but remains in a downtrend. In spite of today’s rally, crude is still in a downtrend in all three timeframes.

1) There are rumors that the shale industry is considering something it hasn’t done in decades: limiting production.

2) Trump has hinted he will get involved at some point. Low gas prices are good for US consumers, but of course, bad for the US oil industry. 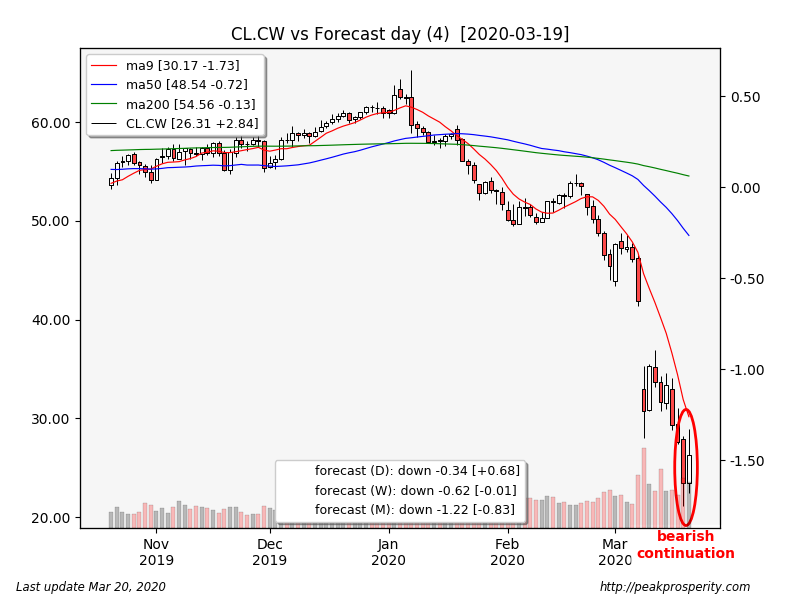 SPX rallied +11.29 [+0.47%] to 2409.39 on moderately heavy volume. The high wave candle was neutral, and forecaster climbed, but remains in a downtrend. SPX is in a downtrend in all three timeframes.

TLT shot up +2.72%. The bullish harami candle was a reasonably strong bullish reversal (46%), forecaster climbed, but remains in a downtrend. TLT is in a downtrend in both the daily and weekly timeframes. The 30-Year yield rose +4.0 bp to +1.81%. That was a very strong harami pattern. TLT might have put in a near-term low.

TY climbed +0.50%. The spinning top candle was a reasonably strong bullish reversal (43%), forecaster climbed, but remains in a downtrend. TY is in an uptrend in the weekly and monthly timeframes. The 10-Year yield was unchanged at +0.0 bp to +1.18%. As with TLT, this was a very highly-rated spinning top. 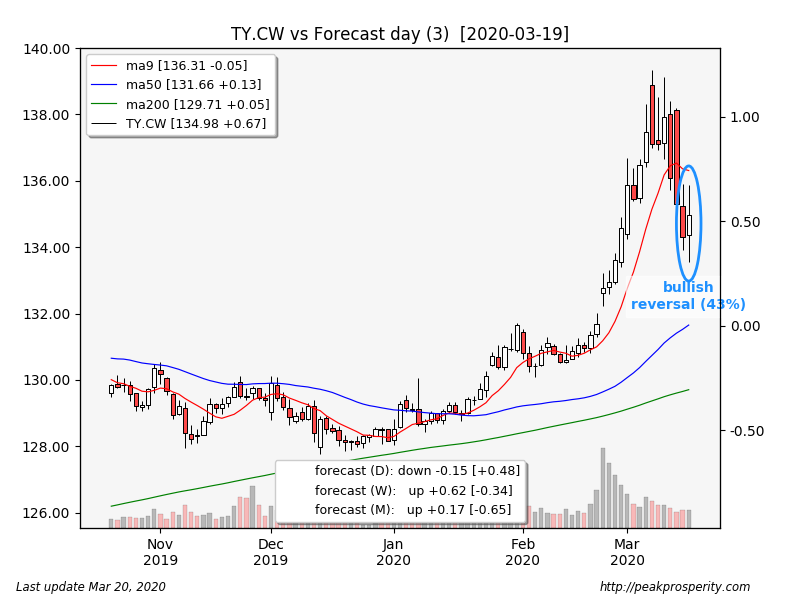 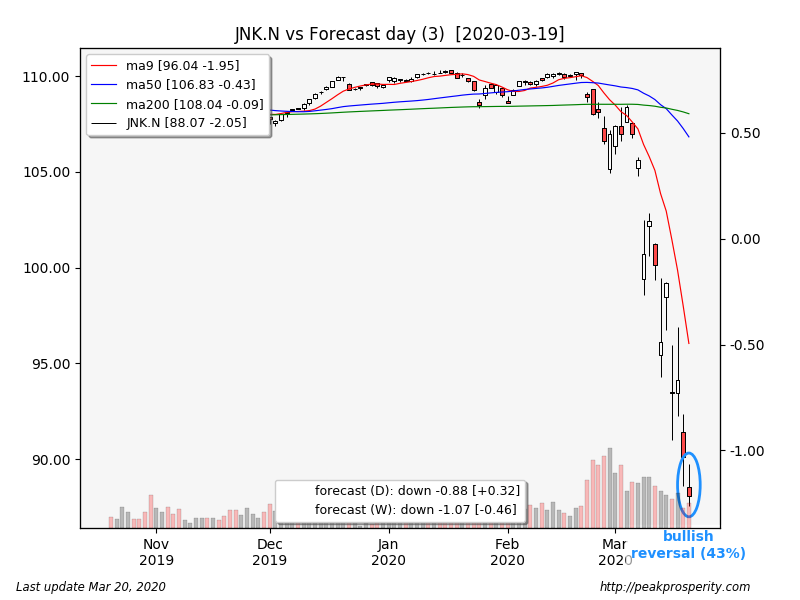 Today’s silver rally has removed some of the premium from PSLV and BV, but shortages still remain, at least for silver.

On the one hand, money rushed into the buck, sending it to a 17-year high. This has been the 3rd strongest week on record for the buck, at least dating back to 1985, the start of the DX futures, and today was an incredibly large move.

On the other hand, today’s rally in crude and the possible reversal in copper helped take some of the pressure off risk assets, allowing SPX to mostly chop sideways, and bonds stopped dropping too.

Which one do we believe? They are both saying very different things.

Well, the rally has continued into the Asia trading session. As I write this, pretty much everything I track is moving higher: e-mini futures, silver, gold, copper, platinum, crude, and even bonds. It is a curious sight. Mostly, these items move in opposition, but right now, they are all moving higher together.

And the buck is reversing direction. Pretty emphatically, too.

This makes me think that the recent price movements of many of these instruments were about liquidations due to too much leverage. Traders didn’t want to buy anything, even if it was dreadfully underpriced, because they weren’t sure it wouldn’t fall more. I certainly felt this myself. It strongly suggests that most of the participants were (are?) cash-poor and overlevered.

But at some point, the shorts cover (I sold my second-to-last batch of puts yesterday), the decline peters out, and people start to buy again. Armstrong really was right – during a strong decline, only the shorts have the courage to buy the lows.

I can’t say this is THE low, but it does feel like A low. Too many things are lining up for a reversal, at least intraday.

Is it about the prospect for treatment – possibly chloroquine (the ancient anti-malarial), or maybe favipiravir (a new influenza drug from Japan)? Or maybe its about Trump saying he’ll weigh in at some point on the whole Saudi-Russia-kill-US-shale mess.

I really don’t know, all I can report is my sense that fear seems to be subsiding, at least for now.  That has put a bid under nearly everything that has sold off hard over the past 3 weeks.

Not sure how long this lasts, but that’s where we are right now.

“Nothing goes to heck in a straight line.” — Wolf Richter

For those that think we are are the low, let me ask you this macro question:

How do you think the economic outlook going forward VS if I asked in 1 Jan 2019?  I’d guess most would think it looks much worse now than 2019.  If so why would you pay 1 Jan 2019 prices as this is about what the S&P is trading at now?

I’d also suggest their is much more pain to come and there is absolutely no rush to catch the falling knife.  I’m thinking a L shaped recovery with a lot of time at the bottom.  I’d not be surprised if we see a multi decade stagnation in equity values as Japan has lived through.  Imagine the reality of decades after the peak the nominal value is still only 50%. 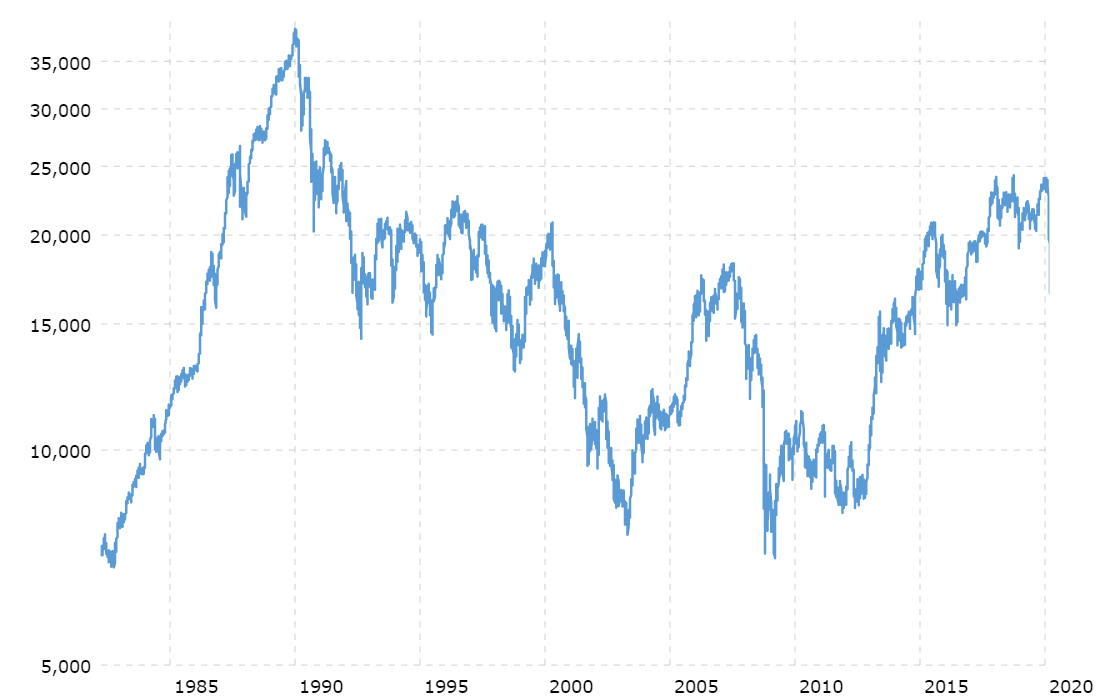 While we track SPX, that’s not where my focus tends to be.

Here’s an example: oil services.  It has been crushed.  Down 91% from 2011 prices, down 94% from the peak.  Priced for extinction.  Does the chart below look like SPX?  Not so much.   Components of this ETF are all at all time lows right now. 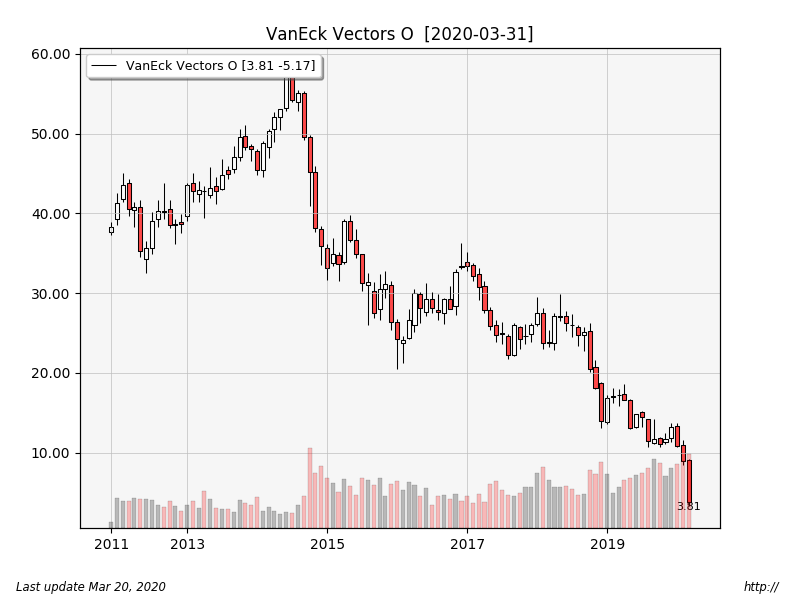 It definitely might get creamed some more, especially if Saudi Arabia continues its war on US shale.

But if Trump manages to get Saudi Arabia to stop its shale attack, the snapback from the extinction event prices could be pretty impressive.

Likewise, if we get a reasonable treatment for corona virus in the next month, things really could all turn around.  Chloroquine could be a preventative.  An 18-month pandemic, where everyone gets tested regularly, and gets handed the antiviral to make sure the disease doesn’t progress.  Life continues.

Of course, lots of risk too.  I’m not sure what happens with all the unpayable debt for all those iffy companies out there in the overall economy.  And I’m not sure these are “hold forever” trades either.

But when something is at all time lows, I get interested.  Timing may still not be right, it may well be too soon, but we aren’t talking about SPX.

I was wondering what is going on with that quadrillion dollar derivative bubble that people used to talk about. Seems like we would be hearing more these days, not less. It supposedly has the potential to bring on another great depression if it pops.

Also, there doesn‘t seem to be much discussion of possible world war breaking out. To which antebellum period does the current situation most correspond? I vote for WWI.

D. Schectman puts in another good plug for Peak Prosperity

Banks are about to drown in ocean of defaults

Exactly! One of my belief orienting moments for the year was reading an article by Alisdair Macleod in January. I trust Macleod as he’s not prone to making wild predictions. He’s an economist who thinks like an engineer, which I like. Most economists think like astrologers.

Anyway in the January (pre HB-19) article he’s thinking 2020 is the year for structural failure of the financial system and the process will take months , not years. He draws parallels between the current situation and the historical collapse of the Mississipi bubble (John Laws) 300 years ago. Admittedly some of this goes over my head.

Alasdair Macleod – Panic And The End Of Fiat Currencies