Gold fell for much of the day, trying to rally around noon, but then moving lower into the close. The long black candle was a bearish continuation, forecaster dropped, moving deeper into its downtrend. Today’s plunge took gold weekly into a downtrend also. Gold is now in a downtrend in both the daily and weekly timeframes.

Gold/euros fell -39.72 [-2.74%] to 1411.51 on very heavy volume. The confirmed bearish spinning top candle was neutral, forecaster dropped, moving deeper into its downtrend. Gold/euros remains in a downtrend in all three timeframes. 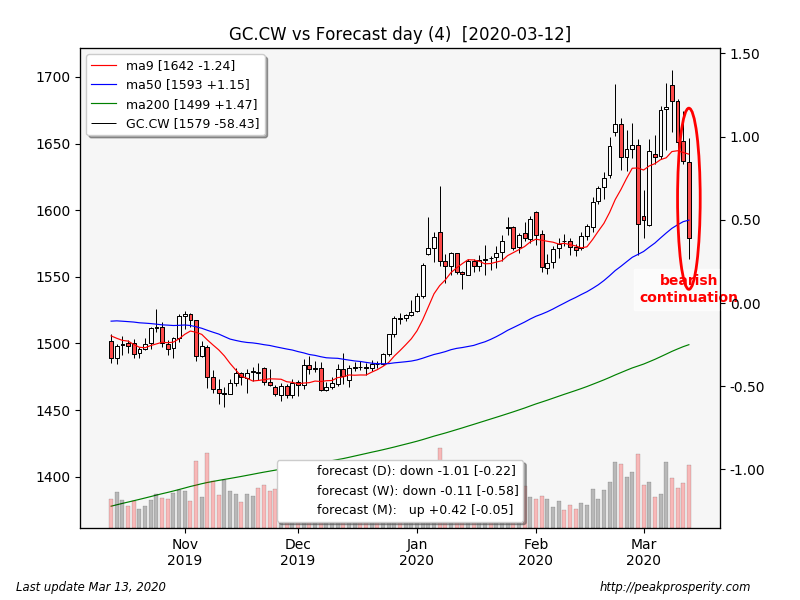 Silver mostly tracked gold, selling off in Asia and London, trying to rally in the afternoon in the US and mostly failing. The long black candle was a bearish continuation, and forecaster fell, moving deeper into its downtrend. Silver is in a downtrend in all three timeframes. 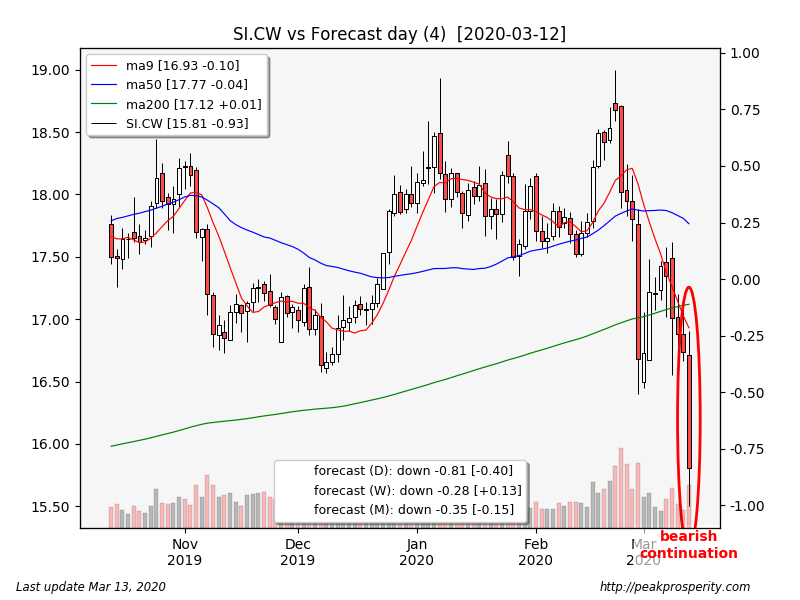 Miners looked like silver, only more so – falling in the morning, rallying back to even at noon, then selling off hard through end of day. GDX dropped -11.36% on heavy volume, and GDXJ collapsed, falling -26.27% on extremely heavy volume. XAU plunged -11.28%, the long black candle was a bearish continuation, and forecaster dropped, moving deeper into its downtrend. XAU monthly fell into a downtrend today, putting XAU in a downtrend in all three timeframes.

Copper fell -0.04 [-1.43%] to 2.45 on moderate volume. The long black candle was a bearish continuation, forecaster climbed, but remains in a downtrend. Copper is in a downtrend in both the weekly and monthly timeframes, and is in a no-trend state on the daily. Even though copper’s fall was relatively mild, this does make a new 3-year low for copper.

The buck rallied +1.03 [+1.07%] to 97.47 on extremely heavy volume. The long white candle was a bullish continuation, and forecaster climbed, rising into an uptrend. The buck is now an uptrend in the daily and monthly timeframes.

While copper declined modestly, AUD just collapsed. Which one is providing the better “China” signal? I’m not sure. Time will tell, I suppose.

Crude dropped -2.06 [-6.11%] to 31.64 on extremely heavy volume. The long black candle was neutral, forecaster climbed, but remains in a downtrend. Crude is in a downtrend in all three timeframes.

SPX plunged -260.74 [-9.51%] to 2480.64 on extremely heavy volume. The long black candle was a bearish continuation, forecaster dropped, moving deeper into its downtrend. SPX is in a downtrend in all three timeframes.

TLT climbed +0.62%. The unknown candle was unrated, forecaster dropped, moving deeper into its downtrend. TLT is still in an uptrend in the weekly timeframe. The 30-Year yield rose +15.0 bp to +1.45%. Today marks the second day of money retreating from 30-year debt, on a day when risk assets were just crushed.

TY climbed +0.59%. The long white candle was a probable bullish reversal (50%), forecaster climbed, moving higher into its uptrend. TY remains in an uptrend in all three timeframes. The 10-Year yield rose +3.0 bp to +0.85%.

JNK plunged -4.05%. The long white candle was a possible bullish reversal (34%), forecaster dropped, moving deeper into its downtrend. JNK is in a downtrend in both the daily and weekly timeframes.

The BAA.AAA ratio is exploding higher – it shot up +12 bp yesterday. I don’t have a daily chart, but the weekly is starting to look very alarming, up +21 bp just this week alone, and the forecaster is in an uptrend in both weekly and monthly timeframes.

This ratio is a BFD. As they say, stocks are for show, bonds are for dough. Crashing stock markets lead to recession, but crashing bond markets lead to depressions, and when the BAA.AAA ratio starts to scream higher, as it is doing right now, it is a very bad sign for the credit markets.

Lower grade corporate credit may finally be losing its luster.

Well, risk assets were taken out back and shot today, and except for the 10-year, the rest of the market took varying degrees of damage. Palladium was the standout, dropping a massive 27.5% in just one day, with the runner-up: bitcoin, off 27.1%. Honorable mention: junior gold miners, down a horrific -26.3%.

In a panic, everyone sells everything, except treasury durations under a year.

Do you remember the on-site discussions I had with Mark, where we were trying to sort out what sort of asset bitcoin was? I used to say that we had no idea, but that we’d find out for sure once TSHTF. Today gold: -3.57%, silver -5.56%, bitcoin -27.1%.

Bitcoin might might have been a safe haven asset once, before people started trading it using leverage. Now – its like everything else, only with higher volatility. Once the margin calls start, leveraged traders need to sell, and the underlying item craters. Boom.

While the equity debacle is now in full swing, my eye is on bonds. The crisis will occur there. That’s the area that will determine if we have a recession, or a depression.

That BAA.AAA ratio is my go-to indicator for credit market concerns. It has started screaming higher over the last two weeks. Unfortunately, the data lags by a day, so I’m not sure what it did today, but the trend is not reassuring.

What does this mean? My sense is, the Fed may well end up executing its “buyer of last resort” mission in the very near future – the question I have is, will they follow their legal mandate of only purchasing “good collateral” at a discount (Fed Discount Window) or will they hoover up all the crappy debt in sight?

I suspect they’ll start with good collateral, but as things get worse, they’ll eventually hoover up everything in sight, and they’ll end up with a balance sheet full of crappy debt, just like the ECB.

Do we have a sense that China is going back to work? The CCP is working overtime on narrative control (sending doctors to “help Italy” – if they’d only been as clever and thoughtful back when their own doctors were first reporting about the disease), but that plunge in AUD/USD to a fresh new decade low [-3.72%!!] is really not a reassuring signal. AUD = risk on = China.

Something to think about: today’s gold plunge was at least partially a currency effect, due to the strong dollar rally. The “true” drop in gold was visible in gold/Euros: down -2.74%. That’s a really bad day for gold, but it is peanuts compared to what is happening almost everywhere else.

Last thought: watch the BAA corporate credit and crappy debt. That’s where the real crisis will come from.

Sorry for posting charts separately, but the site shoots my reports down if I try to post more than two charts with all that text at once.  Today’s report took me four attempts.    So: 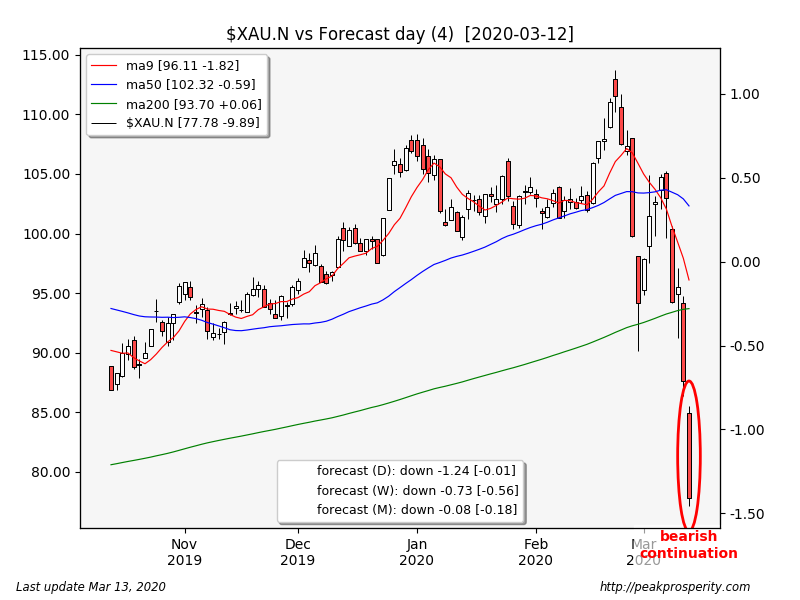 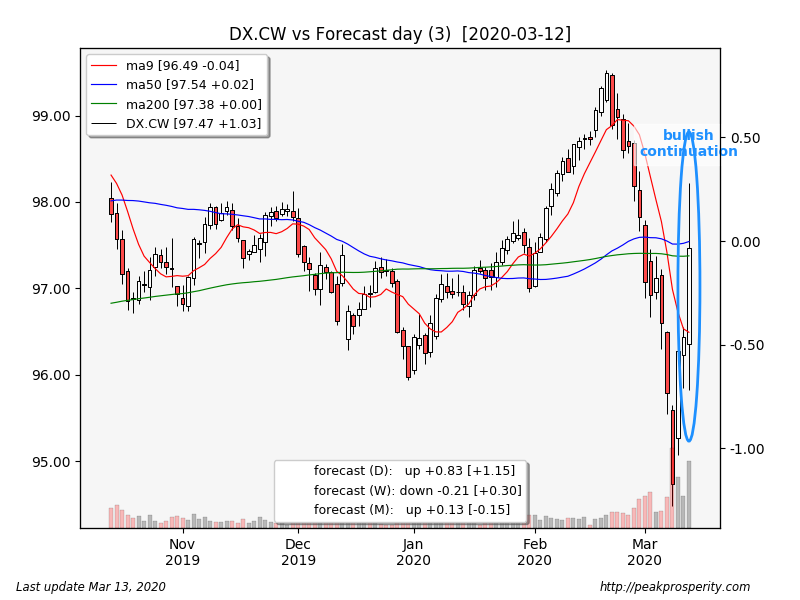 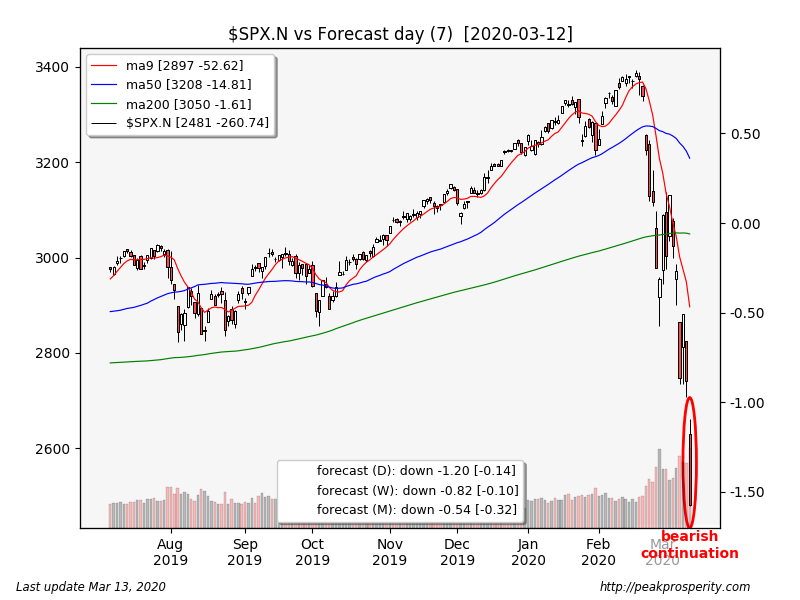 And finally – BAA.AAA, the credit ratio metric, which doesn’t start to move higher until people start to panic out of lower quality (BAA) corporate debt.  Which they appear to be doing right now.

Note: this is a weekly chart – the data is one day delayed, and as you can see, this has been a huge move.  Data from the 12th will appear tomorrow. 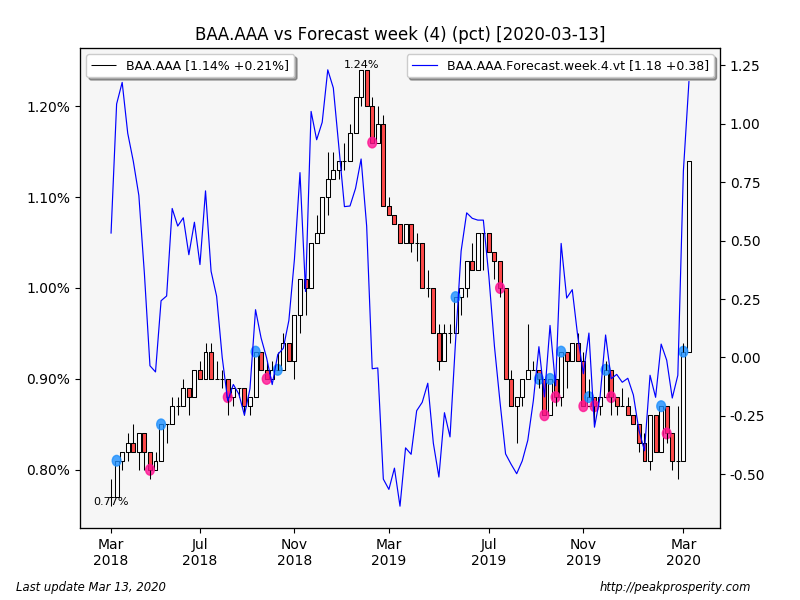 And finally, here’s the gold reversal model, 5-day and 10-day.

The 5-day is quite positive for gold: 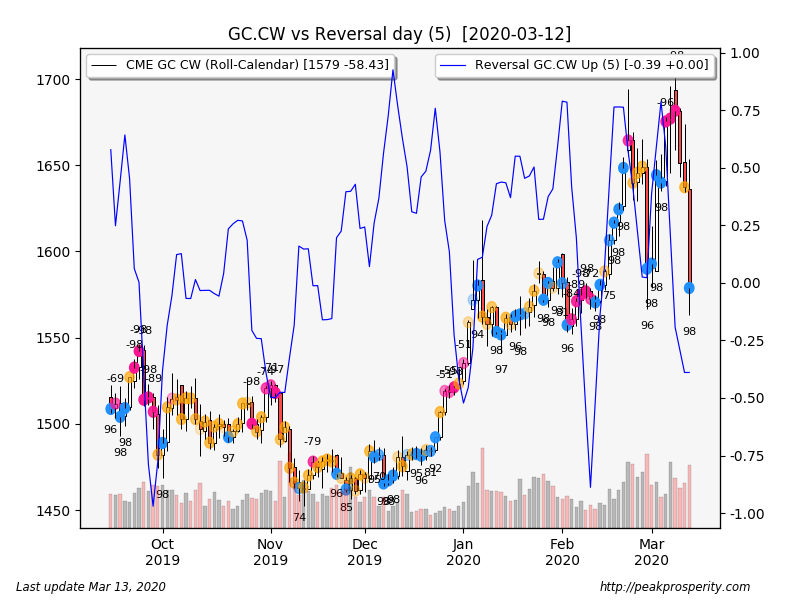 The 10-day is less positive: 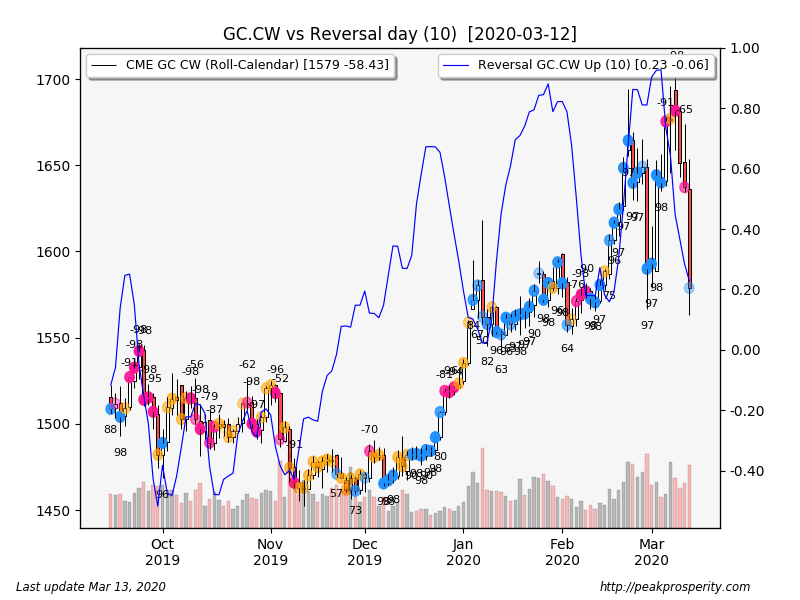 The silver models – 5-day is slightly bullish, while the 10-day is neutral.

Everybody I follow has been looking for a bounce for at least a week. Now we get it on a Friday? I doubt traders will stay long through the weekend.

Interestingly, while the VIX was 70+ yesterday, my remaining VIX calls were not gaining any money. Do you think that was signaling that a bounce was coming?

Not much of a bounce today. Most was in the overnight but its all slowly deflating away as traders are selling into that rise. We are going below 20,000 today on the DOW by my best estimate. In the direction of 19,500 just for an extra scoop of misery and to cap off a nasty, ugly week that many people have never seen before and wish they could forget. Looking at some of the FANGS and some still have a lot of room to drop. The lady in the pharmacy was telling me how upset her husband was about the crash. Sounds like he got his ass kicked by the market and it was money they could ill afford to lose. There will be a lot more stories like that in the coming months. But then she added cheerfully….”stocks will come back up”. Good for her!

And after being annihilated yesterday, GDXJ is up 4%!

And who knows what might happen over the weekend.  The Fed could sign up to buy every single crappy bond in existence.  Enough money pumped in, and even a dead cat could bounce significantly.  Or the bounce might be viciously sold by end of day Monday.

I’m really curious to see what silver does over the weekend.  Will people back up the (physical) truck?

Things have stopped making sense.  Fear and margin calls are driving everything.

Raise your hand if you’ve been through a pandemic in a completely connected world where globalized manufacturing delivers just in time to a heavily indebted world that has been searching for yield now for 10 years.  Anyone?

In other words, I haven’t a clue.  But usually, weekends are the time when Stuff Happens.  New money printing campaigns, closing markets, closing banks – it all happens on weekends.

I was in a malaria epidemic once. And then we had cholera. Survived it all thanks to being vaccinated and having medications but it was not so good for a lot of people around me. Guess that’s not quite the same thing….

So I just bought shares of JNUG in the last few minutes of the day and really, it felt like gambling since there is no guarantee this thing will even be trading next week. But I bought anyway @ 3.70 and 3.90 thereabouts. What the hell, you only live to see gold miner ETF’s blow up like confetti once.

This piece of junk was selling for over 100 two weeks ago. I could not resist.

I’m going to remain 50% in cash this weekend and most of the rest is long silver and short gold, to minimize risk and in the hope that that all time high gold to silver ratio won’t be making new highs again next week.

My inner goldbug’s bitcoin envy got the better of me and I’ve gone about 15% long bitcoin in the hope that some of the money thrown at the markets will end up there. Looks like Trumps emergency announcent only helps stocks for the moment. Mnuchins version of whatever it takes didn’t move the needle much earlier in the day, but pretty much sums up the response:

You would think that the stock markets retracing to where they’d been most of the last 2 years, was a sign of perfectly functioning markets, given the impact of corona on the nuts and bolts of our economy. An oil price war shock on top affects some stocks very badly and would otherwise help a lot of other stocks, but for the current corona virus breaks on oil consumption.

So to me what’s stopped making sense is the perceived need to save certain sorts of market participants whenever things go south. Although to be fair, this isn’t a 2008 banking crisis and in this case I think it makes sense to at least save businesses that would otherwise have a viable future as soon as storm corona blows over.

With a ‘whatever it takes’ president in his election year, markets could make a whole lot less sense for longer than we can remain, err, rational.

Thanks again for the commentaries Dave, they’re definitely helping me through.

Eager to get some paper gold (PHYS) and silver (PSLV).  Let me know when it looks like the PM crash is hitting bottom.

(Not asking for investment advice or anything….)