Gold started falling in Asia, moving steadily lower for most of the day, spiking down sharply at 8 am, bouncing back at 10:45 am, but then continuing slowly lower through to the close. The opening black marubozu candle was a bearish continuation, and forecaster fell, dropping into a downtrend. Gold is now back in a downtrend in all three timeframes.

Gold/euros fell -22.00 [-1.53%] to 1417.69 on moderate volume. The opening black marubozu candle was a bearish continuation, forecaster dropped, moving deeper into its downtrend. Gold/euros is in a downtrend in all three timeframes.

After a positive day yesterday, gold sold off fairly briskly today, making a new low. The candle print wasn’t bullish, and forecaster dropped back into a downtrend. There was just a tiny amount of short-covering. Yesterday’s positive move appears to have been a headfake. The low should be near (according to the OI anyway – OI is at the lowest level in 18 months) but it has not yet arrived. 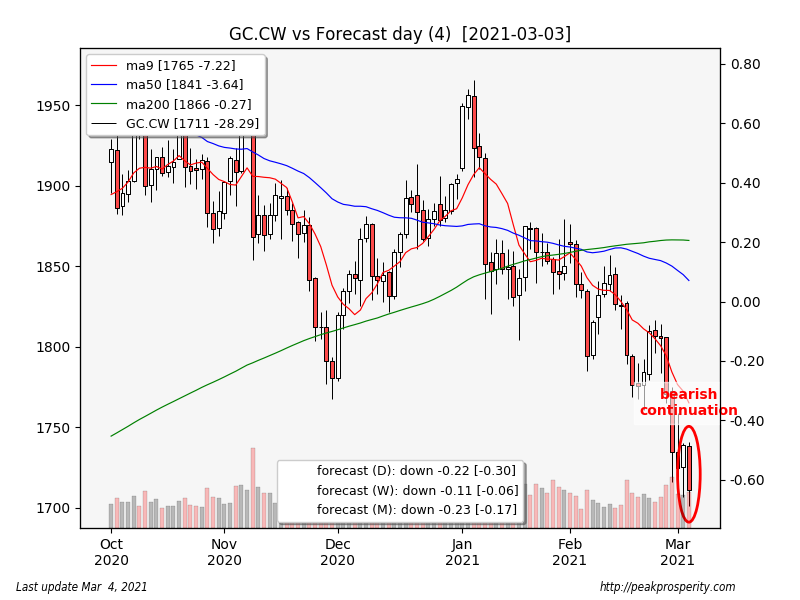 Silver followed the same track as gold – chopping lower in Asia, selling off hard at 8 am, bouncing back sharply at 10:45, but then selling off for the rest of the day. The opening black marubozu candle was unrated, forecaster dropped, moving deeper into its downtrend. Silver is in a downtrend in both the daily and weekly timeframes.

Unlike gold, silver did not make a new low, but it did end the day below the 50 MA, which was a bearish sign. There was a fair amount of short-covering in silver. Silver’s long term uptrend remains in place, but the 50 MA crossing was not a positive sign. Silver does remain above the “silver squeeze” starting point though, so that’s a plus. 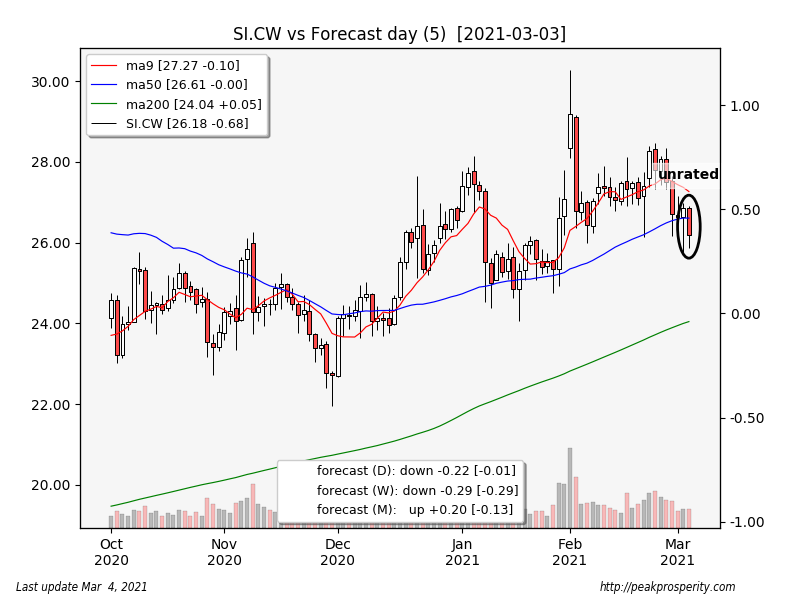 Miners gapped down at the open, fell for the first two hours, bounced back sharply along with gold at 10:45 am, then chopped sideways into the close. GDX fell -1.91% on heavy volume, and GDXJ dropped -2.75% on moderate volume. XAU fell -2.25%, the doji candle was a bearish continuation, forecaster dropped, moving deeper into its downtrend. XAU is in a downtrend in both the daily and weekly timeframes.

The miners made a new 9-month low today, but the rebound off the low looked reasonably strong, and the buying continued for the most part through end of day. While the candle print itself wasn’t bullish, the intraday action was reasonably strong. I’m cautiously optimistic about the mining shares – especially when we contrast their intraday performance with what happened in equities. (Hint: equities did … poorly). 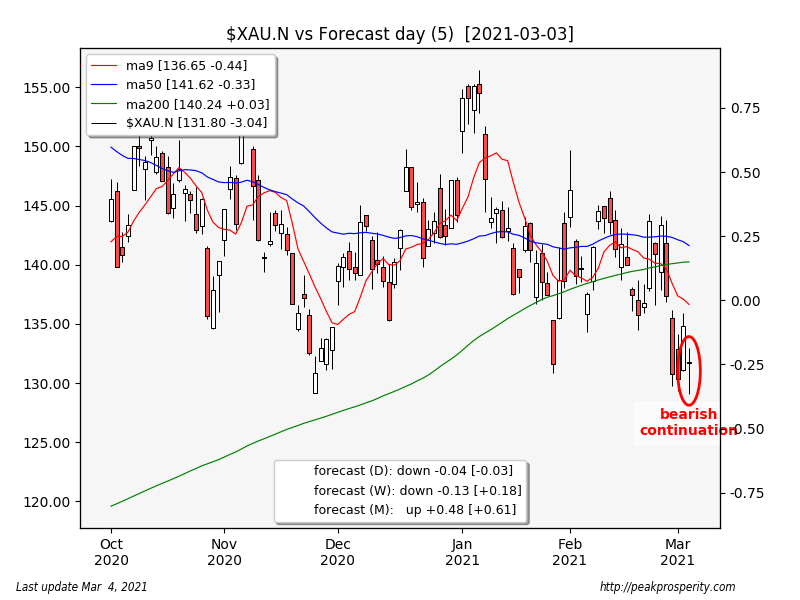 Copper plunged -0.11 [-2.61%] to 4.10 on moderate volume. The long black candle was unrated, forecaster climbed, moving higher into its uptrend. Copper is in an uptrend in all three timeframes.

Well copper sold off hard today, wiping out the gains from yesterday’s rally, and is now back below the 9 MA. And yet, copper remains – just barely – in an uptrend. 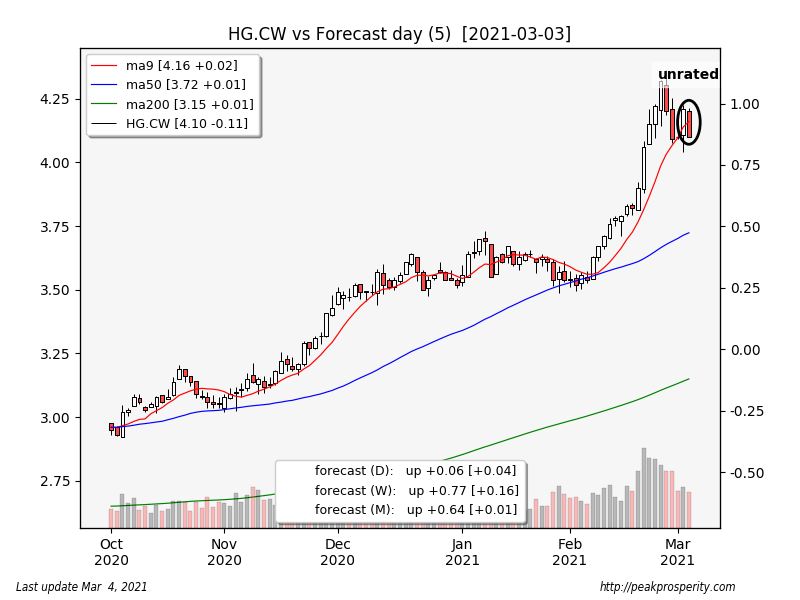 The buck climbed +0.14 [+0.15%] to 90.92 on moderate volume. The spinning top candle was a reasonably strong bullish reversal (47%), forecaster climbed, moving higher into its uptrend. The buck is in an uptrend in all three timeframes.

The buck remains in an uptrend; above both 9 and 50 MA lines. It does not look to be in any hurry to move rapidly higher, but it has probably put in a longer-term low at this point. 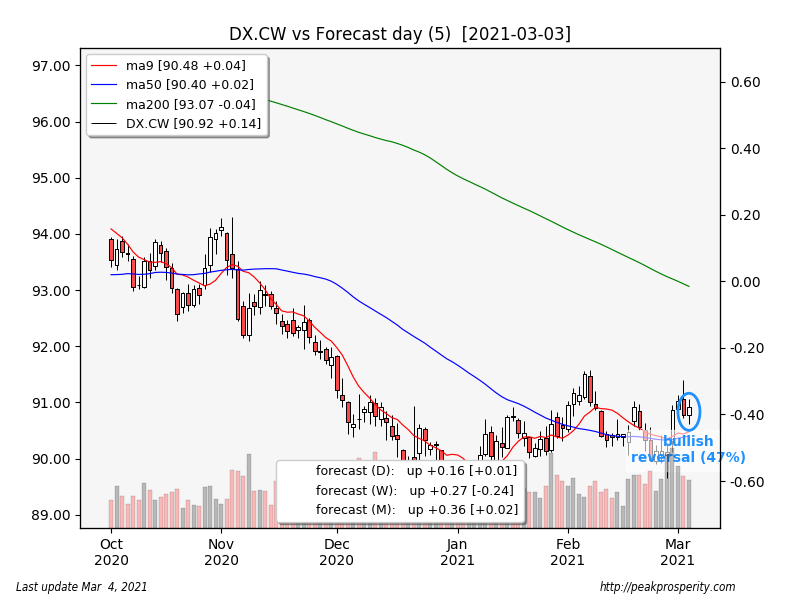 Crude shot up +1.58 [+2.66%] to 60.97 on moderate volume. The long white candle was a reasonably strong bearish reversal (44%), but forecaster climbed, rising into an uptrend. Crude is back in an uptrend in all three timeframes.

Crude rallied for much of the day, and is now back in an uptrend. The candle print looks more than a little disagreeable, however, the (daily) uptrend remains weak, and crude was not able to close above the 9 MA. It feels as though there might be more downside ahead for crude, at least in the near term. 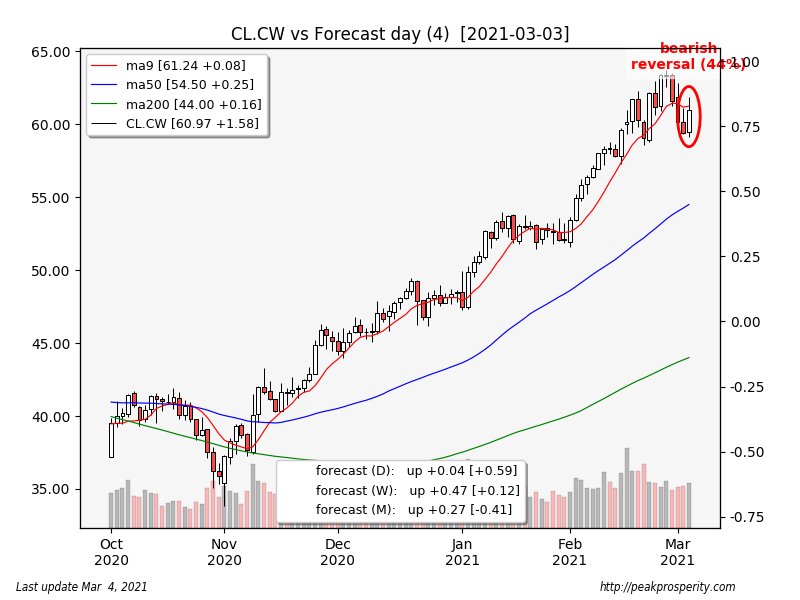 SPX fell -50.57 [-1.31%] to 3819.72 on moderate volume. The closing black marubozu candle was a bearish continuation, forecaster dropped, moving deeper into its downtrend. SPX is in a downtrend in both the daily and weekly timeframes.

NYSE advance ratio was 47%, which suggests the decline was all about large issues moving lower. That lines up with the sector map – tech led the plunge. Notice that the energy sector actually rallied, as did the banksters. This feels more like post-pandemic sector rotation rather than a more general correction. SPX did close below the 50 MA, which is definitely a bearish sign, and it remains in a medium-term downtrend.

Note that sustained rotation out of the big tech names – which have rallied strongly – can definitely result in a sizeable correction in the index. 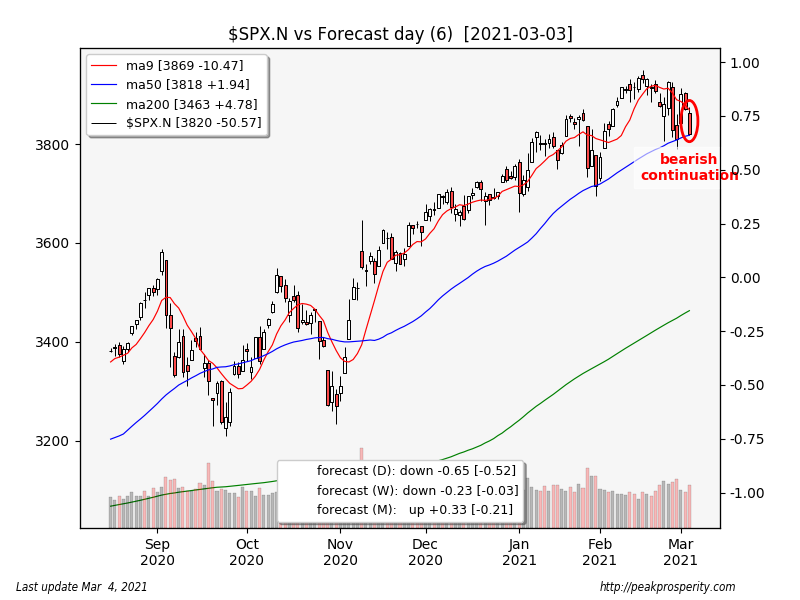 TLT dropped -1.08%. The long white candle was a possible bullish reversal (37%), forecaster dropped, moving deeper into its downtrend. TLT is in a downtrend in both the daily and weekly timeframes. The 30-Year yield rose +7.0 bp to +2.28%.

TY dropped -0.64%. The opening black marubozu candle was a possible bullish reversal (32%), forecaster dropped, moving deeper into its downtrend. TY is in a downtrend in all three timeframes. The 10-Year yield rose +7.0 bp to +1.49%.

Ouch. After rallying for 3 days, bonds now appear to be headed lower once more. Briskly, too. It appears as though the 9 MA is acting as resistance. 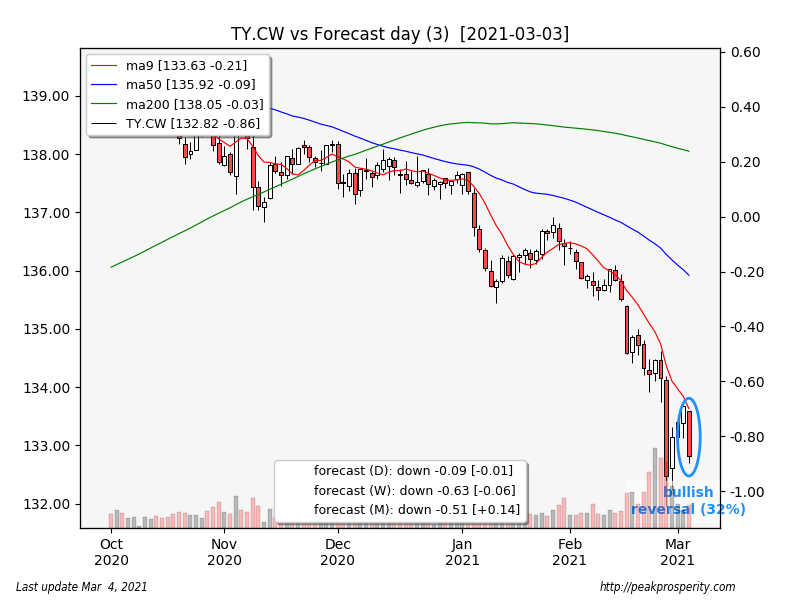 JNK fell -0.17%. The long black candle was a bearish continuation, forecaster dropped, moving deeper into its downtrend. JNK is in a downtrend in both the daily and weekly timeframes.

Crappy debt had a mildly bad day – compared to the terrible day for the 30-year, and the moderately bad day for equities. Crappy debt remains in a downtrend. 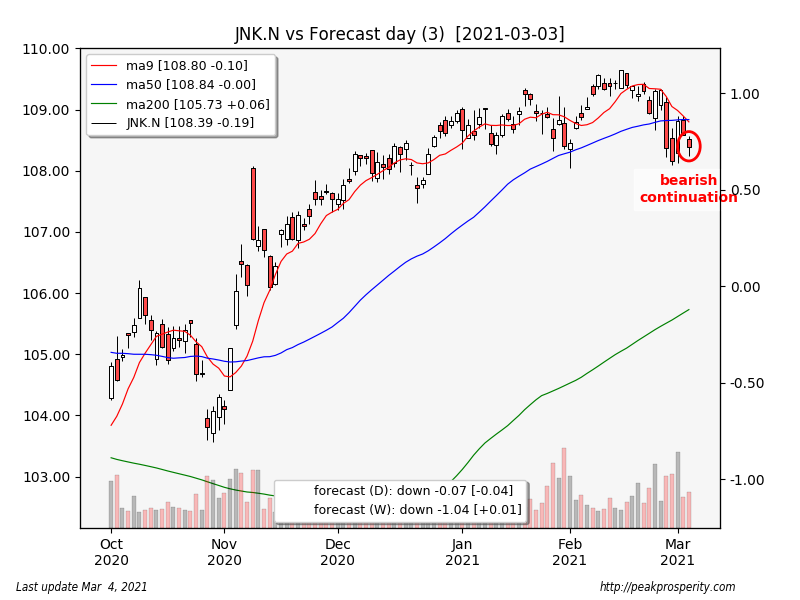 The GLD ETF tonnage on hand dropped -4.74 tons, with 1082 tons remaining in inventory.

PSLV has moved back into a slight premium, but Eric Sprott has not purchased any new bars for the fund. Premiums for bars at retail remain relatively high.

PSLV daily trading volume continues to decline; it is now down to 2.8x normal.

Gold, silver, and the miners all sold off today, with gold and the miners making new lows. While silver dropped the most, the silver longer term chart looks substantially better than either gold or the mining shares.

Open interest for both silver and gold are now relatively low, with gold looking the most positive; the larger the drop in OI, the closer to the low we probably are. That’s what history suggests – more often than not, anyway. It isn’t a perfect indicator (and it can always drop even lower, of course), but it is one of the signs.

Bonds were hit hard today. An article over at zero hedge (h/t member FC) suggests that the 10-year treasury market may be broken. This seems to be because there is too much shorting happening. Or rather, nobody is buying the 10-year, except presumably, the Fed.

This is an inflationary signal. Rates appear to be headed higher. Possibly much higher.

Risk assets were mixed again; equities, crappy debt, and copper all sold off, while crude actually rallied. To me it looks as though the equity-market sell-off is more about sector rotation than about a large-scale correction. That’s because the NYSE advance ratio was fairly close to neutral; this tells me that the selling was all in big issues, not a broad-based correction. That could change, of course; that’s just where we are right now.

The buck moved higher; it appears to be slowly recovering. The pressure in the treasury bond market doesn’t seem to be causing trouble for the buck just yet.

And now for the stories that caught my eye today:

2) The LA Unified School District has decided to prepare our children for a brave new world. You really have to see this two-minute video (complete with really happy music) explaining how children must present their papers every single day in order to be allowed to return to school.

Children, as we know, have a very mild reaction to COVID. Why all the fuss?  It appears that “somebody” has decided to habituate young children to presenting their papers (please) in order to access state services. Microsoft, of course, developed the technology behind this system.

It has been a very, very long time since Nazi Germany. Maybe they’re hoping we all forgot how that went.

3) The US now has an immigration crisis at the southern border. I know this because we just got an official denial that such a crisis exists from the new head of DHS, Alejandro Mayorkas. You can never believe anything until it is first officially denied.

Amusingly, “somebody” (cartels and smugglers?) with a decent grasp of marketing appears to have outfitted a bunch of migrants with matching masks and tee-shirts that say “Biden PLEASE LET US IN!” [Picture in the article, below.]

It turns out, there are an unlimited supply of migrants who want to enter the US. Who would have thought? How many migrants do the Biden Donors want to import? Presumably all of them. “Free” healthcare (it’s a “human right”), food stamps, welfare, a “path to citizenship” for all illegals – presumably all that is really attractive if you are living in the third world. All that free stuff is paid for by You and Me, of course. In the middle of a pandemic. When we allegedly shouldn’t be traveling. With much of America out of work. The timing couldn’t be more perfect. And of course, CBP doesn’t test anyone crossing the southern border for COVID. In the middle of a pandemic.

Although it makes no sense – it definitely doesn’t fit with the “Team Apocalypse: OMG PANDEMIC” narrative – what the Donors want, the Donors get.

After all, sperm counts are dropping. The Donors don’t want a labor shortage. They have to plan ahead.

It’s a big club. You ain’t in it. And neither are your kids. Which you won’t be able to have anyway, so don’t worry.

It’s my unfortunate duty to inform the choir here that Joe Bonds and his wife Josephine Gold, also known as the Safe Havens, have died from allergic reactions to the COVID vaccine.

As an ordained minister of markets, I say shame on all you stock-swapping-greatest-fools. Your portfolios shall repent now or perish! The safe haven trade will be born again in the ashes of your covet-thy-neighbor greed.

Let the Market Heaven rain down upon ye snake-speaking-stock-sinners and for the golden angels of Man’s true nature rise up in all their glory! 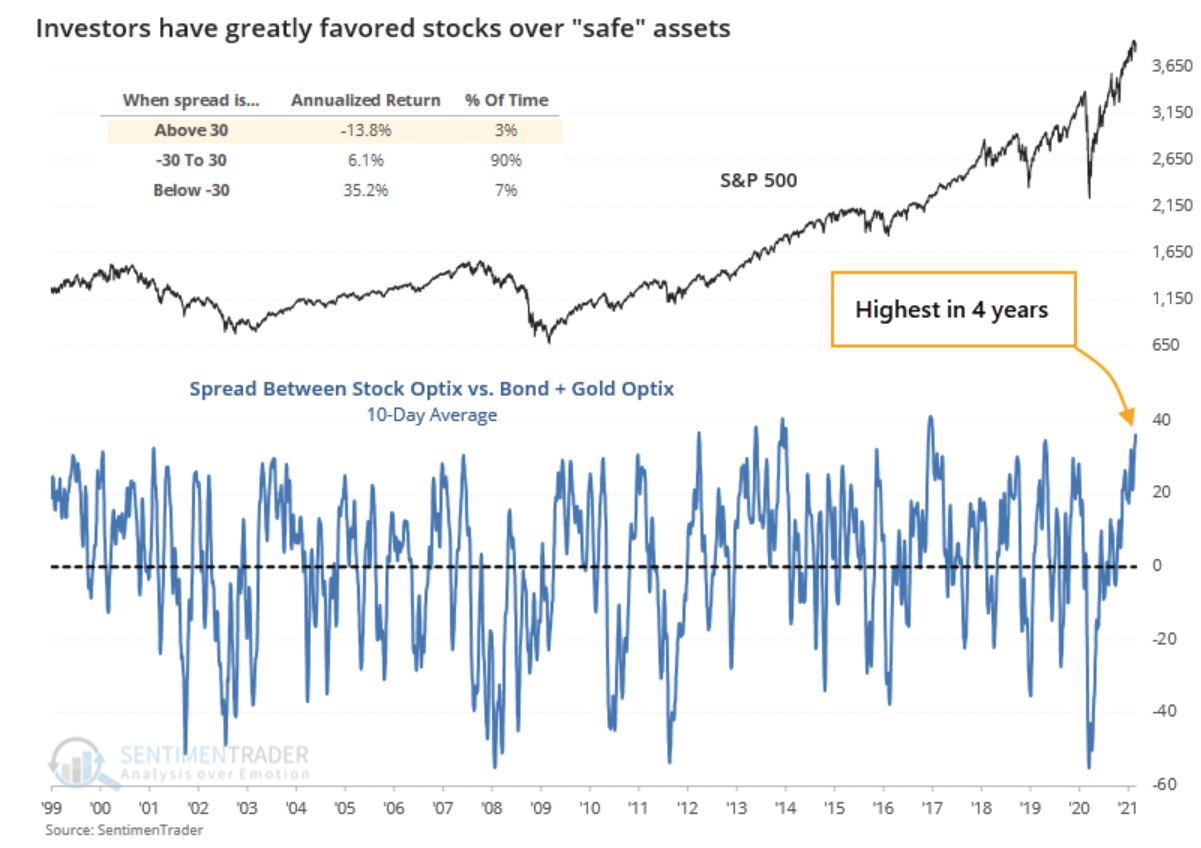 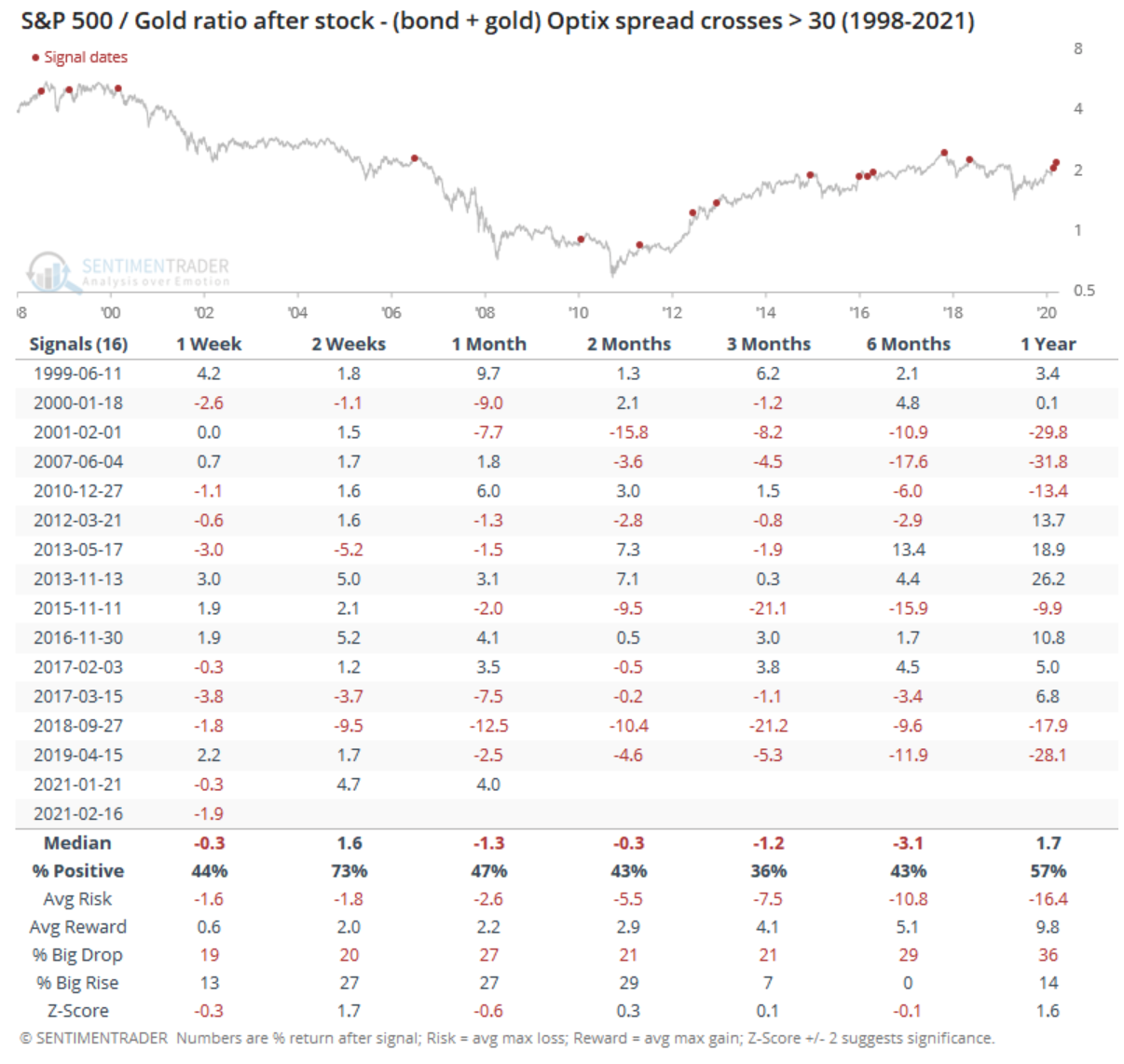 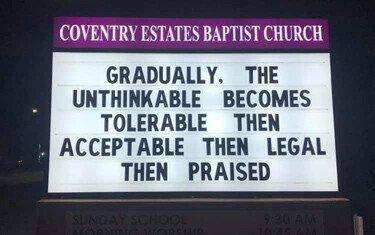 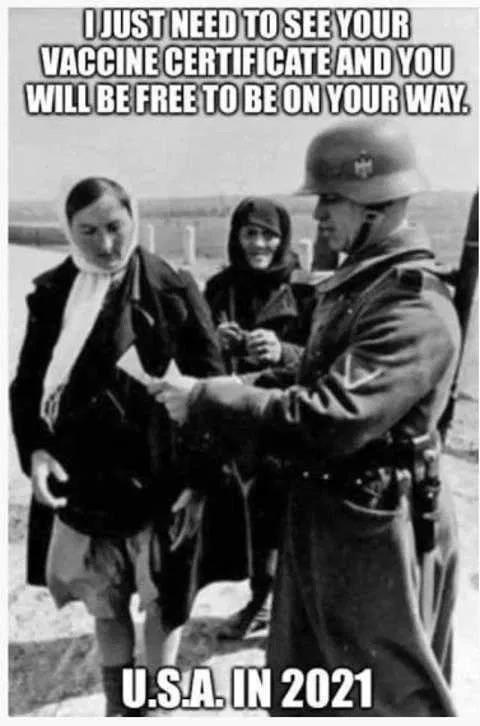 “Note that sustained rotation out of the big tech names – which have rallied strongly – can definitely result in a sizeable correction in the index.”

“The buck moved higher; it appears to be slowly recovering. The pressure in the treasury bond market doesn’t seem to be causing trouble for the buck just yet.”

Rising rates are bad for risk assets, precious metals.  The markets may simply be pushing the Congress to pass Biden’s relief bill.  But, maybe not.  Stay safe out there.  There will always be something!

JAG stated, “It’s my unfortunate duty to inform the choir here that Joe Bonds and his wife Josephine Gold, also known as the Safe Havens, have died from allergic reactions to the COVID vaccine.”

Thanks JAG, you are almost certainly correct on this point.

Nothing new here for the A team, but Jim Grant has always been one of the brighter lights out there.

On The Bond Market

The Fed has “left us with a bond market that all but has been destroyed with respect to the proper functioning of a bond market”.

It’s not just the Fed, Grant says, it’s a “worldwide regime of interest rate suppression and manipulation”. “I think it’s not everyday that you get 4,000 year lows in rates,” Grant joked.

“Junk bond yields begin with a number 3,” Grant points out when asked where the bond market is skewed the most. Without “buying 10’s of billions of dollars in bonds per month to suppress rates – I’d say Treasury Yields would be closer, at the long end of the curve, to 3.5% to 4%.”

i guess you only got to 2nd base.