Gold rallied in Asia, then fell during London and New York, ending the day near the lows. The long black candle was unrated, forecaster was unchanged, and remains in a downtrend. Gold is in a downtrend in all three timeframes.

Gold/euros dropped -1.91 [-0.13%] to 1432.23 on moderate volume. The long black candle was unrated, forecaster dropped, moving deeper into its downtrend. Gold/euros is in a downtrend in all three timeframes.

Gold had a failed rally today; it looked to be at least somewhat driven by the dollar rally. There was some short-covering, a modest number of contracts stood for delivery – really not all that much happened today in gold. Downtrend remains in place. 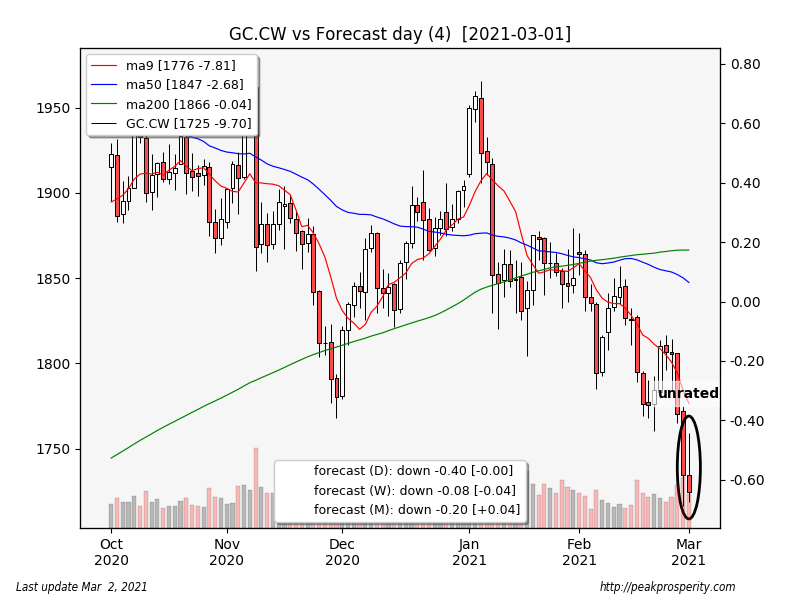 Silver rallied in Asia too, chopped mostly sideways, then fell in the afternoon in New York, ending the day near the lows. The bullish doji star candle was a bearish continuation, forecaster dropped, moving deeper into its downtrend. Silver is in a downtrend in both the daily and weekly timeframes.

Like gold, silver staged a failed rally today. Silver did manage to end the day just above the 50 MA, but it remains in a near term downtrend. This was not any sort of bullish reversal. There was another huge drop in open interest today, which I see as good news. OI has been falling for the past 8 days. It appears to me that the shorts continue to flee. 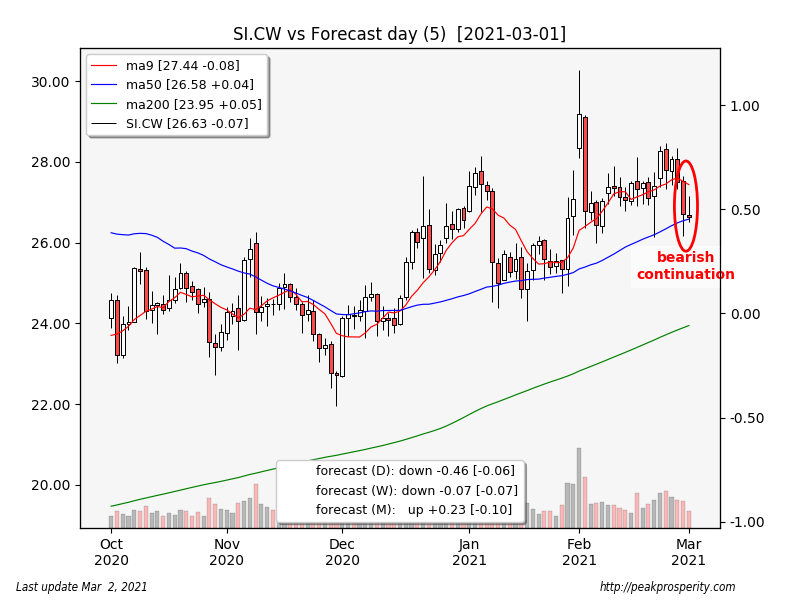 The miners opened slightly higher, sold for the first few hours, then recover slightly by end of day. GDX fell -0.74% on moderate volume, and GDXJ droppedd -1.68% on moderate volume. XAU moved down -0.35%, the long black candle was a possible bullish reversal (31%), forecaster climbed, but remains in a downtrend. XAU is in a downtrend in both the daily and weekly timeframes.

Miners made a new low today. The candle print was mildly bullish, but I’m not sure this marks the low for the mining shares. 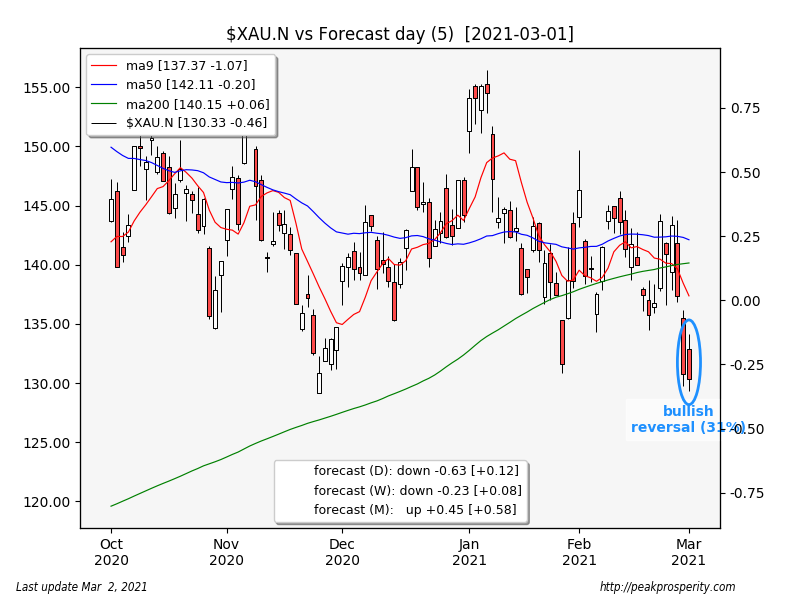 Copper rose +0.01 [+0.24%] to 4.10 on moderate volume. The bullish harami cross candle was a bearish continuation, forecaster dropped, but remains in an uptrend. Copper is in an uptrend in all three timeframes.

Like many of the metals, copper had a mostly-failed rally today. It remains in an uptrend. 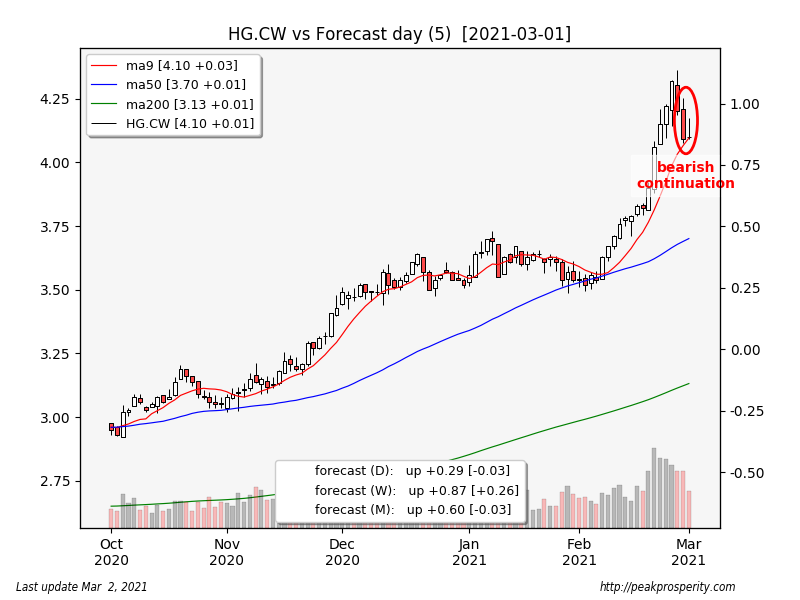 The buck climbed +0.16 [+0.18%] to 91.02 on heavy volume. The spinning top candle was a bullish continuation, forecaster climbed, moving higher into its uptrend. The buck is in an uptrend in all three timeframes.

The rise in the buck did seem to affect the metals, at least to some degree. The buck broke above the previous high set back two weeks ago; that’s a positive sign. 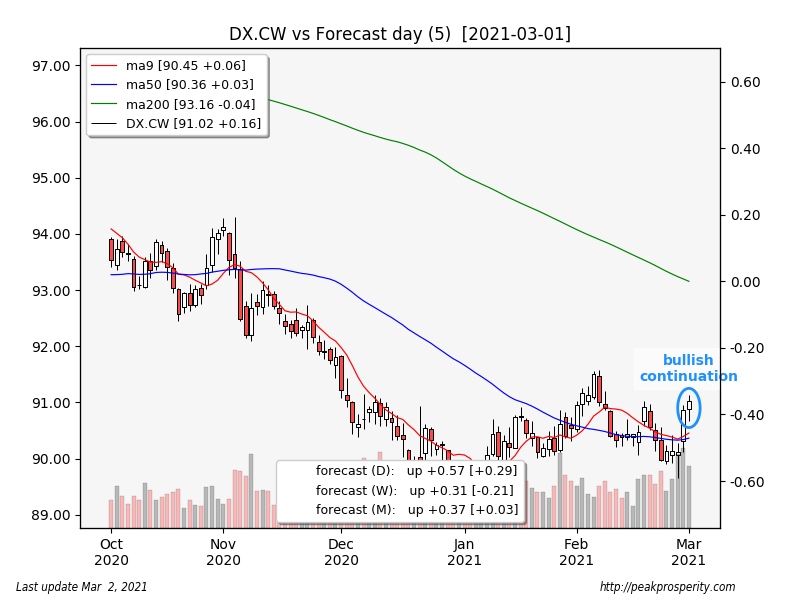 Crude plunged -1.45 [-2.36%] to 60.12 on moderate volume. The long black candle was a bearish continuation, forecaster dropped, moving deeper into its downtrend. Crude is in an uptrend in the weekly and monthly timeframes.

Crude rallied in Asia, then spent the rest of the day falling, ending at the lows. The sharp drop was enough to pull daily forecaster into a downtrend. Might crude have topped out? Today’s move pulled crude well below the 9 MA, which is a bearish sign. 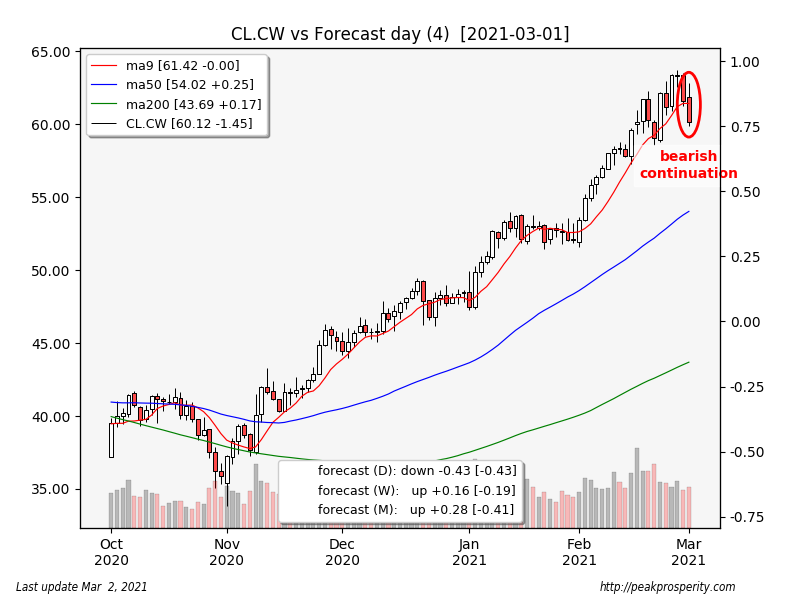 SPX shot up +90.67 [+2.38%] to 3901.82 on moderate volume. The swing low candle was a reasonably strong bullish reversal (44%), forecaster climbed, but remains in a downtrend. SPX is in an uptrend in the weekly and monthly timeframes.

While the swing low candle print wasn’t all that highly rated, the sector map looked very strong. NYSE advance ratio was 80%, which tells us that this wasn’t just a few big issues responsible for the rally. SPX closed back above the 9 MA, which is a positive sign too. 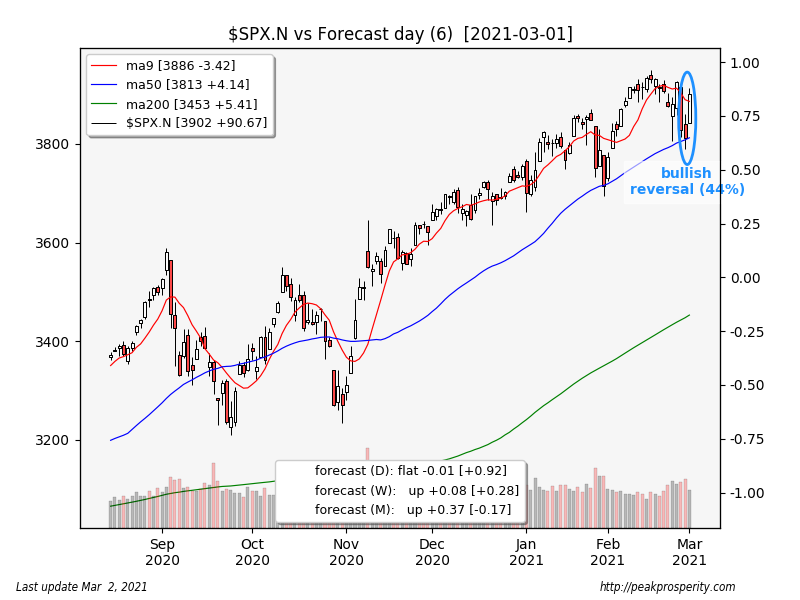 TLT fell -1.44%. The long white candle was unrated, forecaster dropped, moving deeper into its downtrend. TLT is in a downtrend in both the daily and weekly timeframes. The 30-Year yield rose +3.0 bp to +2.20%.

TY climbed +0.20%. The long white candle was a bullish continuation, forecaster climbed, but remains in a downtrend. TY is in a downtrend in all three timeframes. The 10-Year yield fell -2.0 bp to +1.42%.

Curious divergence between the 10-year and the 30-year. This isn’t normal – usually the long bonds rally or fall together. I’m guessing the Fed bought the 10-year. TLT dropped back below the 9 MA – and remains in a modest downtrend. 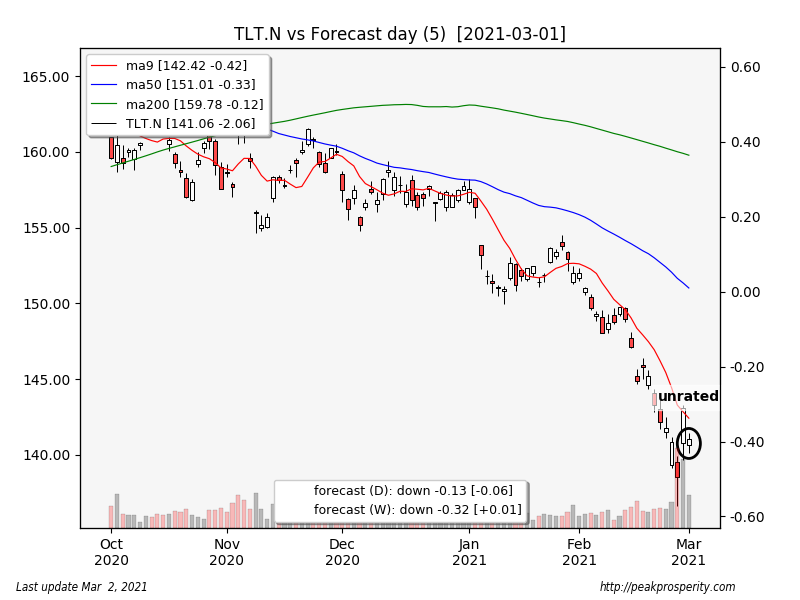 JNK climbed +0.61%. The swing low2 candle was a probable bullish reversal (53%), forecaster climbed, but remains in a downtrend. JNK is in a downtrend in both the daily and weekly timeframes.

It was a strong move by crappy debbt – not quite enough to move back above the 50 MA, but the swing low print was solid. JNK  remains in a downtrend, at least for now. 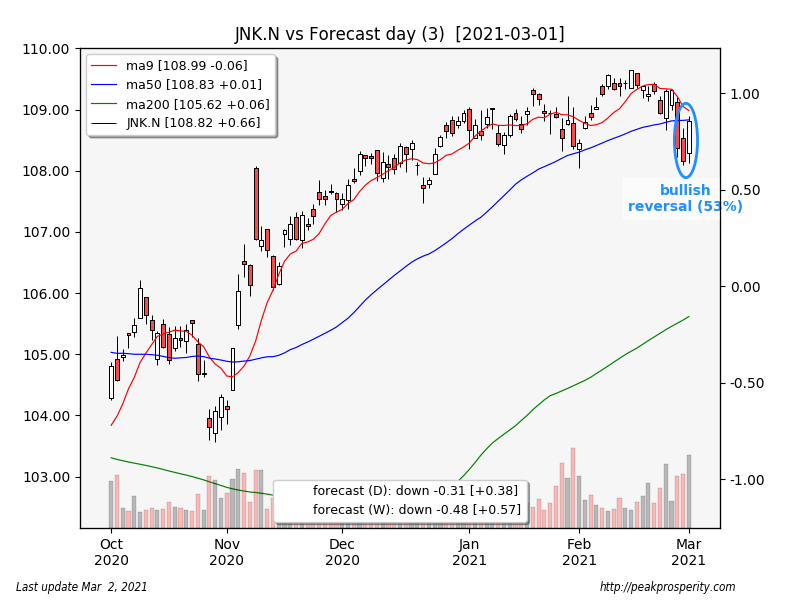 The GLD ETF tonnage on hand dropped -9.03 tons, with 1084 tons remaining in inventory.

Premiums on physical ETFs continue to diverge; the silver squeeze is keeping PSLV in premium, while PHYS remains in discount. Premiums on the big bars at retail have declined slightly, but remain relatively high.

What effect is PSLV having on silver deliveries at COMEX? Here’s some math: Eric Sprott tells us that PSLV has added 3m oz since last Thursday. So, 3m oz / 5000 oz/contract = 600 contracts standing for delivery over the last 3 days. For perspective, 7592 contracts stood for delivery during that period, which suggests that PSLV accounted for about 8% of that demand.

Latest on the silver squeeze at the local thread here:

Gold, silver, and the miners all moved lower today; gold and silver staged failed rallies. There were no hints of a bullish reversal in any of the PM components.

While premiums remain for PSLV and physical silver, it does appear that for the most part, COMEX was able to dodge the delivery bullet this month; there are only 4781 contracts remaining on the front-month SIH21, which will not be enough to cause too much of a fuss for the banksters. That’s my best guess. However, silver remains a small market, and continued premiums for PSLV will allow Sprott to continue buying big bars. This will be a marathon rather than a sprint.

As mentioned, the buck moved higher; the move took place just after Asia closed, and right before London opened – I’m not sure what the driver was.

Bonds had a bit of a funny day; the 30 year fell, while the 10-year moved higher. This doesn’t normally happen. It could be a move “down the yield curve” (from long-duration items to the shorter-duration items). It could also be a artifact of Fed purchases. It was a small move though, so not a huge deal.

And now for the news items that caught by eye.

With the Bad Orange Man gone, and Old White Joe off-limits, the media is starving for stories.

Gov Cuomo (NY) seems to be target du jour. Not for redirecting all those COVID-positive patients back into nursing homes, likely killing thousands of helpless vulnerable old people, but for his tacky sexual advances. A cringe-worthy picture posted in the following tweet: picture = 1000 words.

Once thought to be Presidential timber, Cuomo will be lucky to serve out his term as Governor.

It occurs to me: how long will Old White Joe remain off-limits? Another month? Maybe less?

On a more serious note, and perhaps distantly related: sperm counts – they are dropping.

What’s happening: In 2017, Mt. Sinai Medical School epidemiologist Shanna Swan co-authored a sweeping meta-analysis that came to a startling conclusion: Total sperm count in the Western world had fallen 59% between 1973 and 2011.

“If you look at the curve on sperm count and project it forward — which is always risky — it reaches zero in 2045,” says Swan, meaning the median man would have essentially no viable sperm. “That’s a little concerning, to say the least.”

Smoking:
https://www.ncbi.nlm.nih.gov/pmc/articles/PMC4639396
* … men whose mothers were classified as high level smokers (i.e. > 10 cigarettes per day) during pregnancy had a 48% lower sperm density than men who were not exposed to cigarettes in utero
* men who smoked > 20 cigarettes per day experienced a 19% reduction in sperm concentration compared with nonsmokers

Marijuana:
https://denverurology.com/urology-blog/how-does-marijuana-effect-male-fertility/
* in one study, 78% of men who reportedly experienced ED were frequent marijuana users vs only 3% who did not.
* men who have prolonged and consistent exposure can experience testicular atrophy, a condition where the testes diminish in size and can even lead to the loss of function
* men who use marijuana more than once a week have nearly a 30% reduction in sperm count and sperm concentration
* MJ use: 22% of 12th graders used within the past month.

So let’s see if I get this right. If you make people fatter, legalize marijuana, and fail to regulate endocrine disruptor chemicals in common products people use – heck, lets use them in baby products, and cosmetics that pregnant women use too – you can move way past zero population growth, and well into depopulation. By 2045! That’s what the trend suggests anyway.

Fortuitious? Or an intentional population-control effort of The Great Reset gang?

“You won’t own anything. You won’t have any kids. And you’ll be happy!”

Sure looks like the PM smash may be over.   Now that FND is past.  Interesting how that works.  As Tom has said, its a nice way to get gold at a discount.

Hmm.  Perhaps we should always make our purchases at or around FND?  Cheap gold, courtesy of the banksters.  At least cheap PSLV/PHYS anyway.

Note that it doesn’t always work.  But – often enough – a delivery day corresponds to a low price for the GC contract.  Maybe 3 out of 5-6 times on this chart below?  Including last Friday?  Maybe? 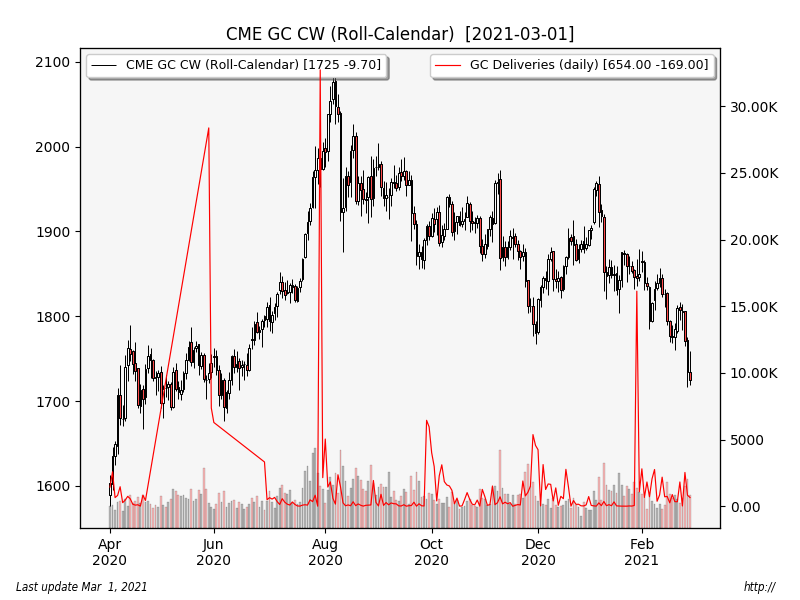 And here are the miners, with gold/silver deliveries.  More like 8 times out of 10 on this chart.  “How to buy cheap miners.”  This could really be a thing.  I just wish I’d been tracking this data.  Maybe I can dig it out of archive.org. 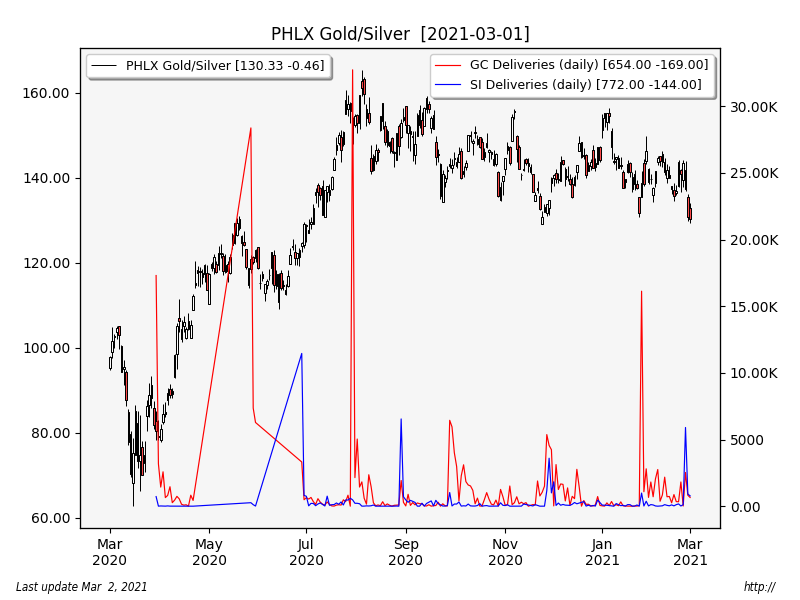