Gold chopped mostly sideways in a wide range today. The bullish harami candle was a bearish continuation, forecaster was unchanged and remains in a downtrend. Gold is still in an uptrend in the weekly and monthly timeframes.

Gold/euros rose +5.60 [+0.37%] to 1512.58 on heavy volume. The bullish harami candle was a bearish continuation, forecaster dropped, but remains in an uptrend. Gold/euros is in an uptrend in the daily and weekly timeframes.

[No update from the CME website regarding open interest for gold. Its enough to make a guy suspicious.] 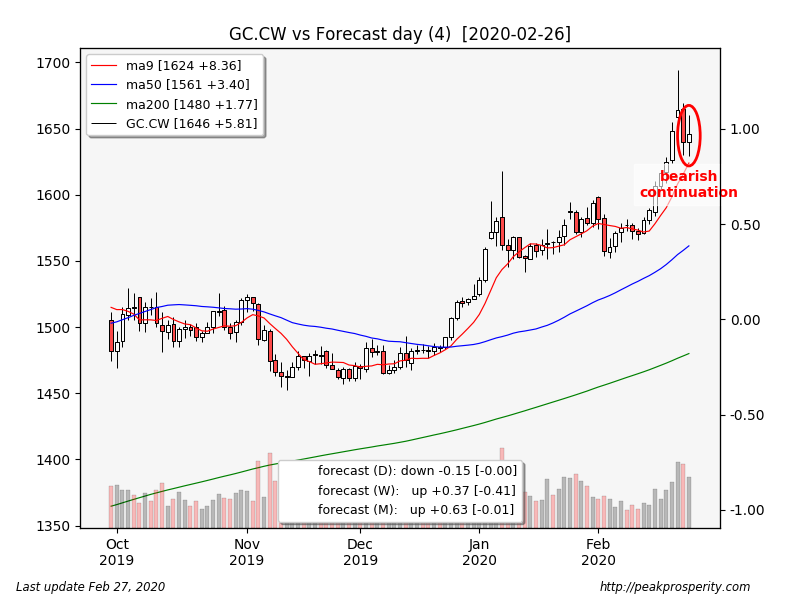 Silver rallied in Asia, but then sold off an hour before the US market opened, chopping sideways into the close. The spinning top candle was a bearish continuation, and forecaster climbed, but remains in a downtrend. Silver remains in an uptrend in the weekly and monthly timeframes. 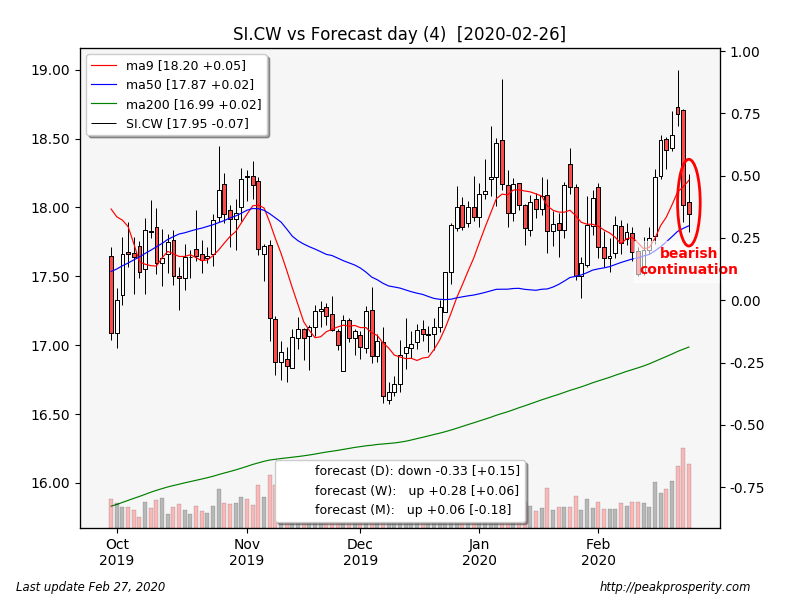 Miners tried to rally today but the rally failed. GDX dropped -0.33% on moderate volume, while GDXJ was unchanged +0.12% on moderately heavy volume. XAU fell -0.12%, the long white candle was a bearish continuation, and forecaster dropped, moving deeper into its downtrend. XAU is still in an uptrend in the weekly and monthly timeframes. 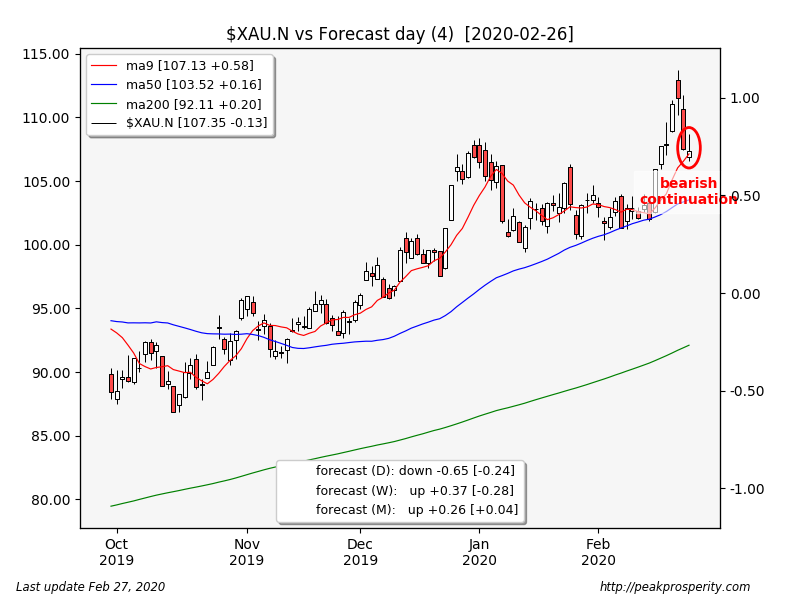 Copper was mostly unchanged [-0.02%] to 2.57 on moderate volume. The southern doji candle was a reasonably strong bullish reversal (48%), but forecaster dropped, moving deeper into its downtrend. Copper is in an uptrend in the weekly and monthly timeframes, but all the trends are weak.

The buck inched up +0.05 [+0.05%] to 98.65 on moderately heavy volume. The long black candle was unrated, and forecaster climbed, but remains in a downtrend. The buck remains in an uptrend in the weekly and monthly timeframes.

Crude plunged -1.45 [-2.89%] to 48.78 on moderately heavy volume. The long black candle was a bearish continuation, forecaster dropped, moving deeper into its downtrend. Crude is in a downtrend in all three timeframes.

Crude was pounded through round number 50; next stop may be the previous weekly close at around 45.

The EIA report was bullish: crude +0.5m, gasoline -2.7m, distillates -2.1m, and that was good for a 10-minute rallly, after which crude plunged almost $2. If you get the sense the EIA report didn’t matter today – you’d be right. 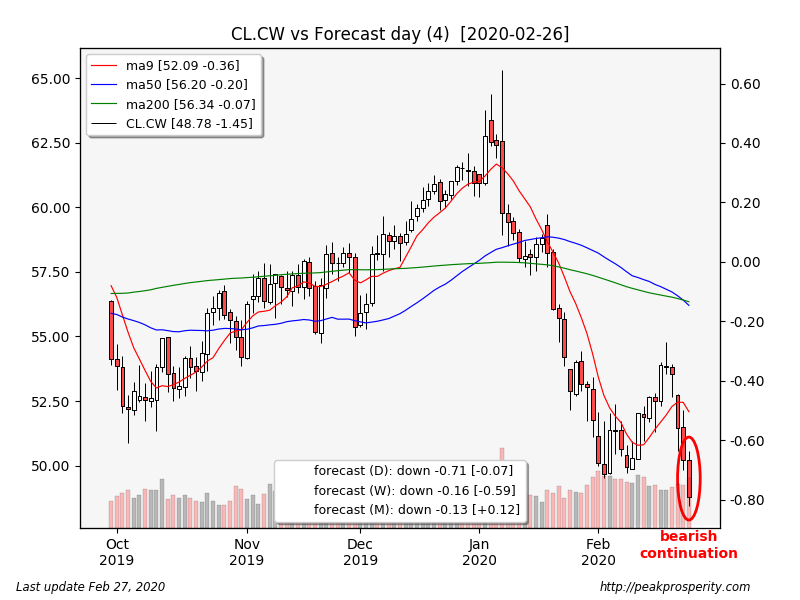 SPX fell -11.82 [-0.38%] to 3116.39 on heavy volume. The long black candle was a possible bullish reversal (39%), but forecaster dropped, moving deeper into its downtrend. SPX is in a downtrend in both the daily and weekly timeframes, and the monthly is on the edge of a bearish reversal also. 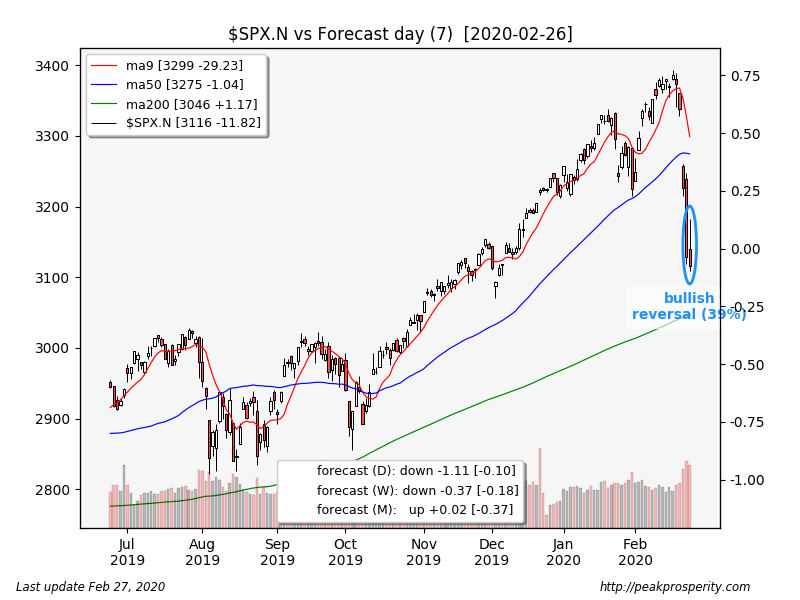 TLT fell -0.53%. The high wave candle was a bullish continuation, and while forecaster dropped, it remains in an uptrend. TLT is in an uptrend in the daily and weekly timeframes. The 30-Year yield was unchanged at +1.80%.

TY moved up +0.13%. The spinning top candle was a bullish continuation, and forecaster dropped, but remains in an uptrend. TY is remains a very strong uptrend in all three timeframes. The 10-Year yield rose +1.0 bp to +1.34%.

JNK climbed +0.11%. The high wave candle was a reasonably strong bullish reversal (49%), forecaster moved higher, but remains in a downtrend. JNK is in a very strong downtrend in both the daily and weekly timeframes. This was a highly rated “high wave” candle; we will see if it leads to anything.

Selling in PM abated also, although the candle prints weren’t quite as positive. The mining shares look particularly ill at the moment – they have retraced back to the initial breakout point from four trading days ago. Even so, miners remain above all 3 moving averages, and all PM components remain in longer-term uptrends.

Copper chopped sideways, looking reasonably strong, while crude smashed through the previous low, looking horribly weak by contrast. I’m not sure what to make of the divergence; I guess I’ll believe the master resource, which appears headed for much lower prices. Likewise, AUD made another 11-year low; last time AUD was here was March 2009.

Long term US treasury bonds hovered around all time highs (all time low yields); money seemed to be headed for shorter-term bills, which helped keep the yield curve from inverting.

Interestingly, bitcoin is also selling off – it is looking a bit like a risk asset at this point. It is hard to say, but it has fallen for 3 days now, right alongside SPX, with the largest downside move happening today [-5.7%].

I guess I’d summarize today as – hints of a bounce in risk assets, with a dissenting vote from crude oil.

One last point: there are a number of clinical trials ongoing for treatments for the virus; positive news from any of them could lead to a very strong short-covering rally in risk assets. It is probably unwise to “lean too heavily short” during times like this, as governments have a vested interest in keeping their markets from correcting. China especially has a vested interest in calming their population, getting them to return to work after first locking them down by the hundreds of millions.

A treatment, presumably, would make it less fatal, but no less infective. Would you still want to catch it if it only had a CFR of 0.5% versus the current estimate of 2-3%?

Still, these days, the world demands a pill, and with pill in hand, the world will be able to face the pandemic with less fear. And that will almost certainly affect market prices.

Today’s market action has me intrigued. The junior miners and gold royalty plays are getting slammed so hard that I’m getting bullish! This looks like a flush-out before a big move, to me.

My gold royalty positions are in Metalla Royalty & Streaming (MTA), Sandstorm Gold (SAND), and  Ely Gold Royalties (ELYGF). I’ve held all of these for awhile so I’m still in the green, but if they go negative, I think I want to double or triple down on them.

Maybe I’m crazy, but I think this will be a fantastic summer for the silver miners and gold royalty plays, before a devastating sell-off of everything this fall.

For the first time in my life, I feel a brotherhood forming with King World News, lol. Are they still in business?

Care to opine on my foolish ramblings?

I think it’s finally upon us.  I would imagine they’ll close the month out on an up note.  So unless some really, really bad news comes out this afternoon, I wouldn’t be surprised to see the finish end up being +400 on the Dow, with tomorrow up at least 600.

It might be a reversal day, but we really have to wait and see how things close.  Lots of stuff can happen in that last 30 minutes, and if traders are still looking to get out, today’s bounce will get unwound.  Me – I have no idea which way it will go.  Crude’s bounce does seem to be petering out – that could be a tell.

Miners sure did get sold.

Hmm.  Long term the miners are in an uptrend, so that’s the thing we should all be respecting right now.  Still, I’d like to see an actual sign of a reversal in the miners before jumping in, yes?  Maybe wait for the selling to abate somewhat?  Right now all I see is selling.

When gold is off just a touch, and the miners crater, its probably not time to buy the miners just yet.  Wait for them to start outperforming a bit first, maybe?

Even if you are just looking intraday, the clue is, if gold drops, and the miners don’t, that’s a sign of miner buying, because normally they move in tandem.  If gold doesn’t drop, and the miners do, that’s a sign of miner selling.  This is what we’re seeing right now.  Dunno why – doesn’t matter.  You don’t want to buy unless some “big money” is in there buying too.  Otherwise, you end up catching a falling knife.

My friends think: margin calls.  But who can say for sure?  Selling in the miners today was just relentless.  And – the SPX rally was completely retraced, and then some.  The close was extremely ugly.

Geez what a move today.

I read earlier this week on spotgamma.com that the Algos would go short if the S&P stayed under 3100. I think we saw that today. It’s the flash crash from a decade ago.

I have to turn on the TV to see the talking heads stutter….J

I’m really surprised that we didn’t start the bounce today.  Wow, what a close.  Equities have to close green tomorrow, right?

My friends think the Fed will probably do some sort of jawboning tomorrow.

Today was just that ugly.

Anyone still think the PPT and “algos” can move the market wherever they want?  In a steep downtrend, all the PPT does is provide a higher price for Big Money to exit.

Its all fun & games until someone loses an eye.

It’s just about time to hear about the treatment for COVID that’s ready to deploy, don’t you think?

I would not hold out hope for gold or mining stock. We have now entered a very clear downtrend and any bounces should be treated as opportunities to take remaining profits and exit. March 4th or 5th could see a brutal selloff by my technical view but whenever it comes there won’t be much quarter for an escape. I realize now this is a gold aficionado site and I am sorry for you guys who are hanging on to hope. But all metals have now peaked and very substantial declines lie ahead as this entire sector deflates. We are going to see gokd trading below 1000 dollars by the time its done. The charts are unequivocal in this regard and my technicals give me a great deal if certainty in expressing that viewpoint.

@Nairobi: would love to see your charts! You can upload a photo through the Insert/edit image button top right of the comment box. If you need any further assistance, I’m happy to help.

> Hmm. Long term the miners are in an uptrend, so that’s the thing we should all be respecting right now.

Looking at GDX, if long term is the last year, yes, for sure. But having failed so decisively to break through the 2016 high mark, I’m starting to believe the thesis that the even longer term trend I should be respecting is the downtrend from the top formed in 2011.