Gold’s rally started during the London session, the day high occured around noon, and most of the gains were held through the close. The spinning top candle was a bullish continuation, forecaster dropped, but remains in an uptrend. Gold is in a very strong uptrend in all three timeframes. Today was another 6-year high for gold.

Is gold getting overbought? Daily RSI-7 is 82, which is definitely moving into overbought territory.

Gold/euros climbed +6.92 [+0.46%] to 1504.83 on moderately heavy volume. The spinning top candle was a bullish continuation, forecaster climbed, moving higher into its uptrend. Gold/euros is in an uptrend in all three timeframes. 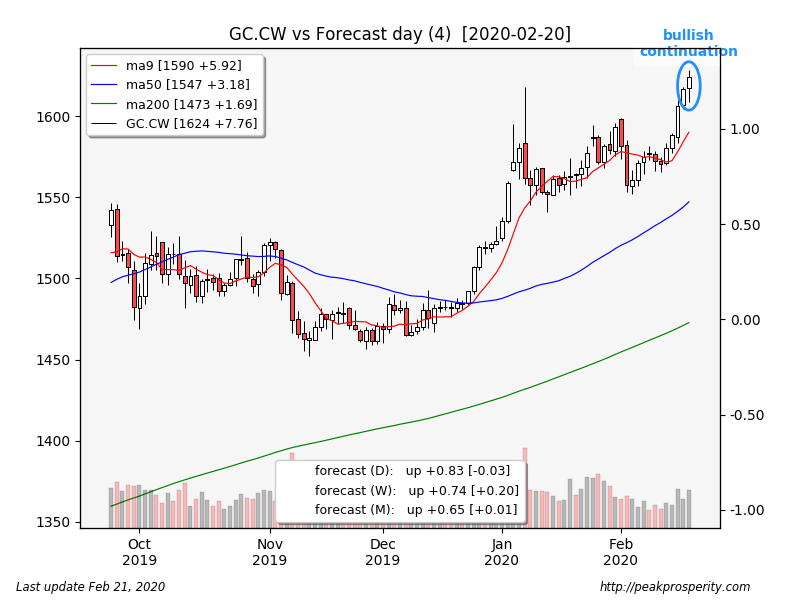 Silver sold off in Asia, but managed to recover much of its losses by end of day. The spinning top candle was unrated, and forecaster fell fairly hard, but remains in an uptrend. Silver is in an uptrend in the daily and monthly timeframes. 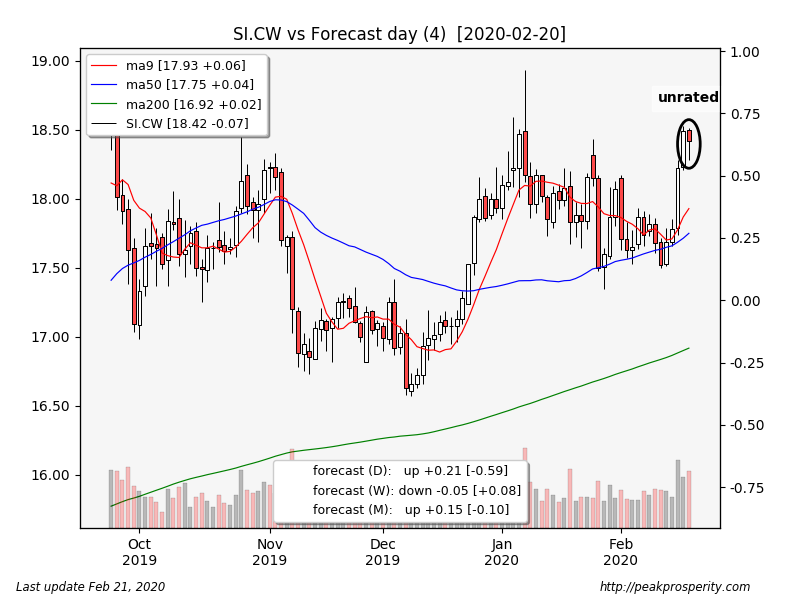 Miners chopped sideways today. GDX was unchanged on moderately heavy volume, while GDXJ fell -0.64% on moderately heavy volume also. XAU moved up +0.15%, the bearish doji star candle was a possible bearish reversal (32%), and forecaster fell, but remains in an uptrend. XAU remains in an uptrend in all three timeframes, and the trends still look fairly strong. 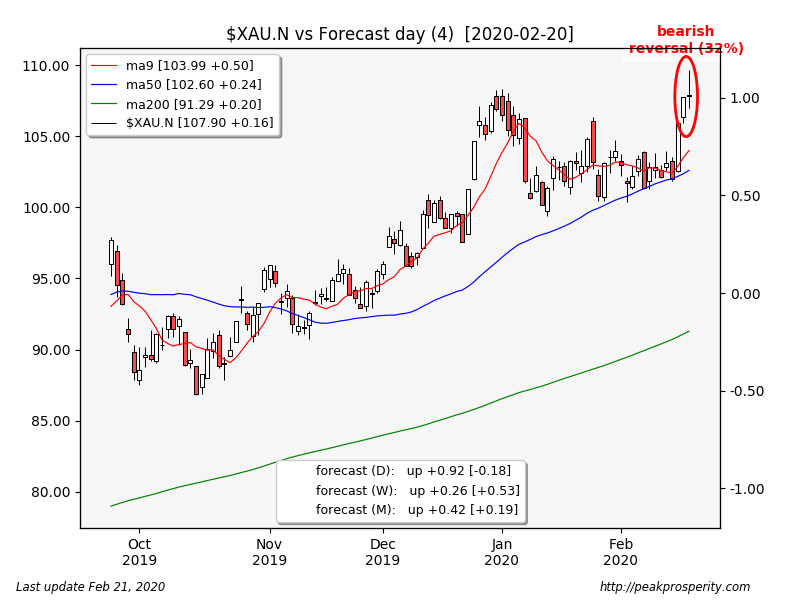 Copper chopped lower for most of the day. The spinning top candle was a bearish continuation, forecaster fell, dropping into a downtrend. Copper is in an uptrend in only the monthly timeframe. Copper also printed a 3-candle swing high, which is a bearish sign, but copper really needs a close below the 9 MA to cement the reversal. Copper really doesn’t look all that great right now. 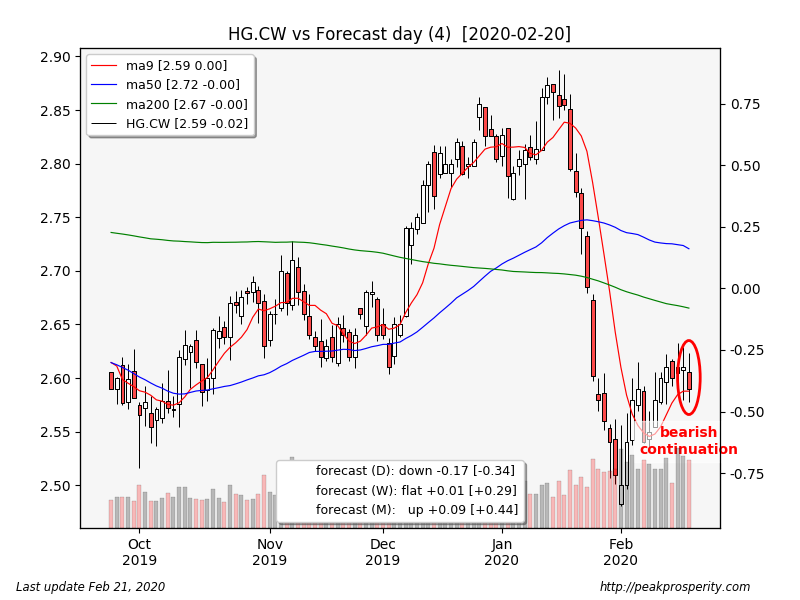 The buck rallied +0.17 [+0.17%] to 99.49 on heavy volume. The opening white marubozu candle was a bullish continuation, forecaster climbed, moving higher into its uptrend. The buck is in an uptrend in all three timeframes. That’s a new 3-year high for the buck today, dating back to April 2017. The buck’s move higher is just relentless.

Note: with all the money borrowed in dollars worldwide, the dollar rally, if it sticks, will cause all sorts of trouble around the world. All that foreigner-borrowed USD debt has become that much harder to repay – incomes continue to be in the local currency, but payments are in the now-more-expensive USD. 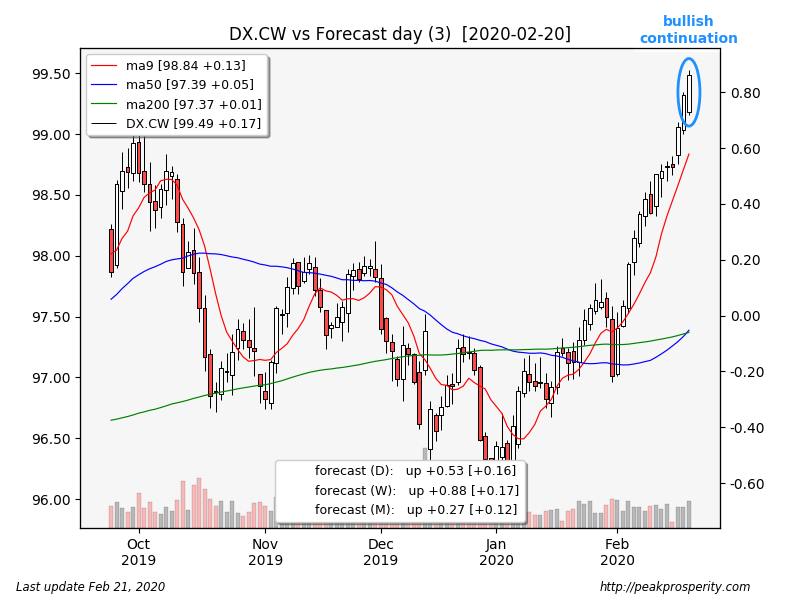 The EIA report today was mildly bullish: crude +0.4m, gasoline -2.0m, distillates -0.6m. Crude rallied going into the report, and spiked up immediately following the report, but then sold off for the remainder of the day. To me this looked ike a bearish event – market sells off on what should be modestly good news. 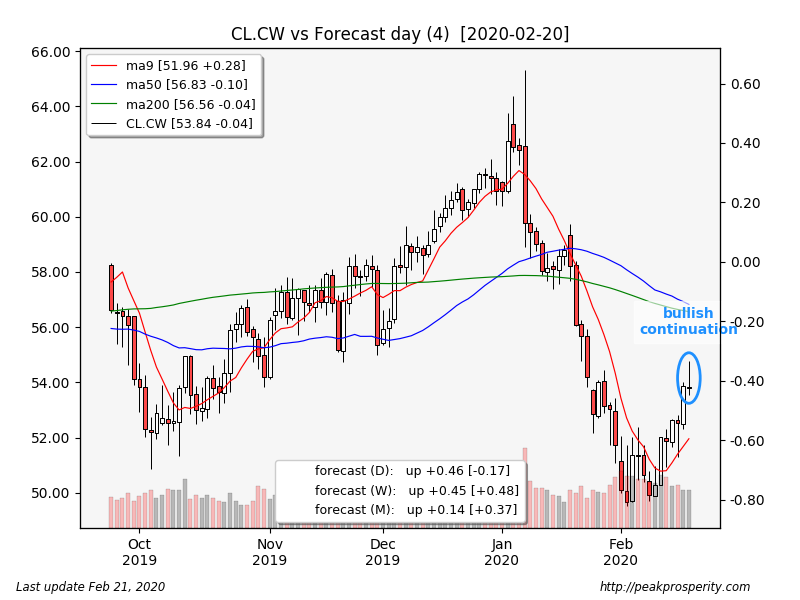 Intraday, the losses in SPX started just after 11am, with the index losing 50 points in about an hour. What was the cause of the sell-off? I’m not sure. One rumor: “some big players decided to exit all at once.” While the market did regain much of its losses by the close, selling continued in the futures markets overnight, and as of right this moment, the bounce is mostly gone.

When markets sell off for no specific reason…that’s a terrible sign. This may well mark the top for SPX. 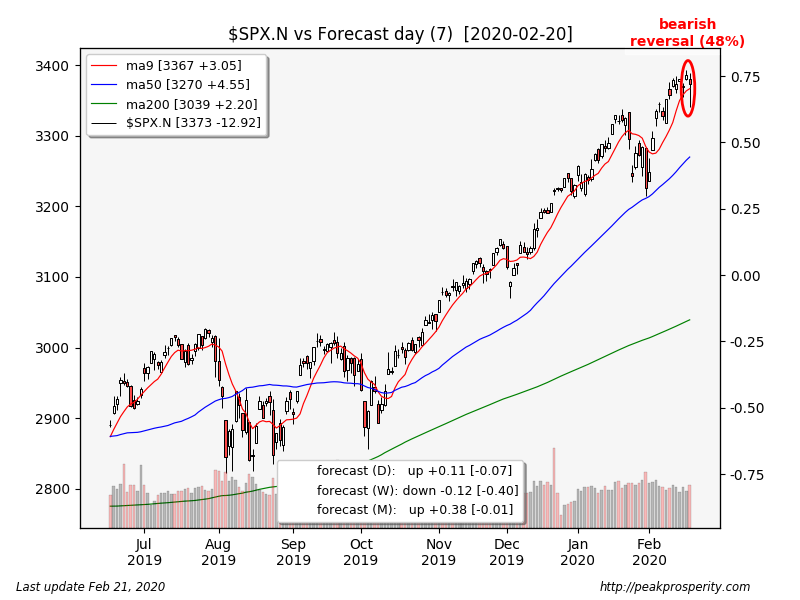 TLT climbed +0.78%. The long white candle was a bullish continuation, forecaster dropped, but remains in an uptrend. TLT is in an uptrend in the daily and weekly timeframes. The 30-Year yield fell -4.0 bp to +1.97%.

TY climbed +0.30%. The long white candle was a bullish continuation, and forecaster climbed, moving higher into its uptrend. TY remains in an uptrend in all three timeframes. The 10-Year yield fell -4.0 bp to +1.52%.

Bonds rallied steadily all day long – independently of what happened in the equity market. 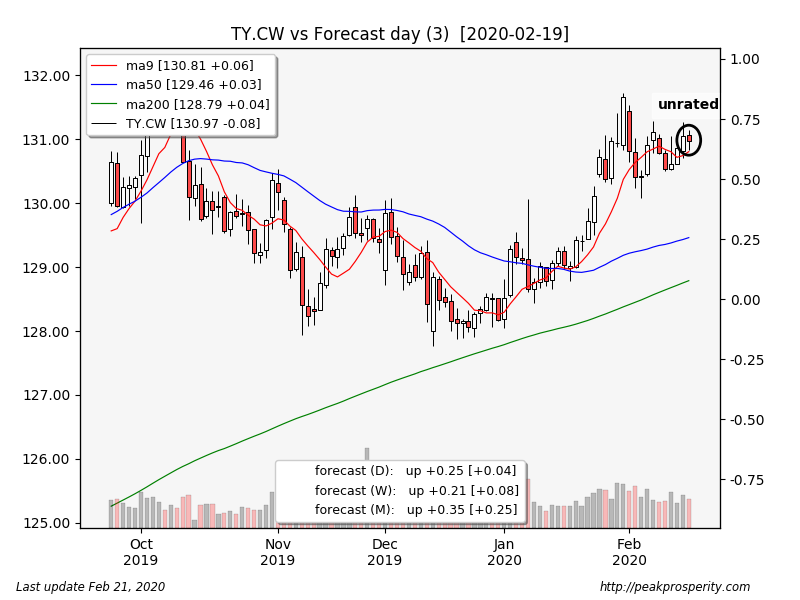 JNK climbed +0.14%. The high wave candle was a reasonably strong bearish reversal (45%), forecaster dropped, but remains in an uptrend. JNK is still in an uptrend in the daily and weekly timeframes.

JNK sold off along with equities in the mysterious late-morning sell-off, but bounced back very strongly in the afternoon. It feels to me that traders have been conditioned to buy crappy debt on the dips. If this is the top for SPX, it probably also marks the top for crappy debt as well. Note that today’s candle print was a very highly rated bearish print for its candle type; most “high wave” candles are fairly benign. 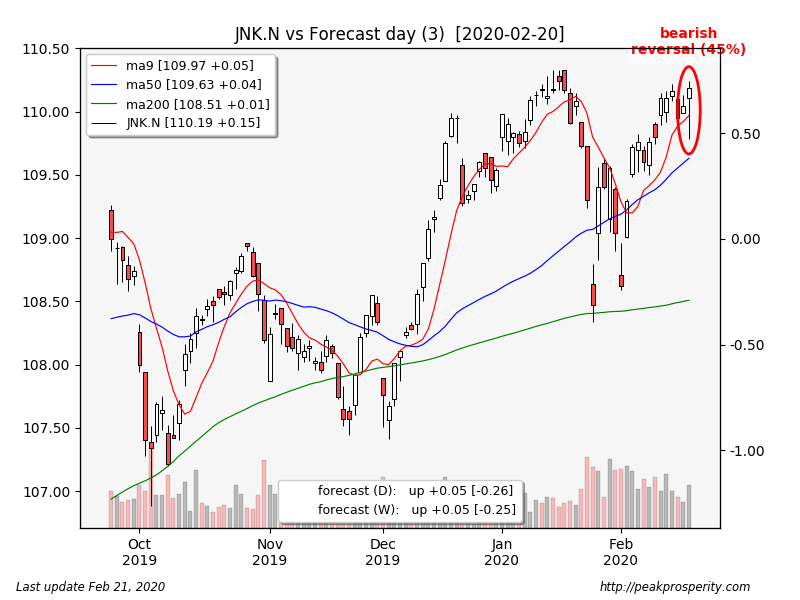 Both gold and bonds did well today, with silver and the miners taking a bit of a break. Are the metals running out of steam? So far, no signs of a reversal.

Risk assets are starting to look a bit shaky; I believe that the mysterious late-morning sell-off in equities is probably a warning sign of things to come. Of course, I’m also talking my book, but at some point, the failure of companies to construct and ship their products while their fixed costs, including debt repayment, remains in place, should at some point affect stock prices. Theoretically.

Copper appears as though it is reversing lower, crude went nowhere, and the AUD/USD fell to its lowest level in 11 years. I haven’t been following AUD as closely as I should – it is an important “China” indicator, since AU is essentiallly the raw materials supplier to China. As China’s industry goes, so goes AUD/USD. AUD is voting “no confidence” on any sort of restart of Chinese industry.

SCMP had a very thorough article on China’s manufacturing supply chain and COVID-19 impacts; both survey results, and anecdotes. Here are some of my favorite bits:

And about that “hidden epidemic” I was talking about yesterday. I dug up a study done by some scientists from the UK, which ranked cities by risk factor. Then I constructed a spreadsheet with reported cases. I then assumed that Singapore was the “gold standard” in detecting cases, and used Singapore’s reported cases as a baseline, and from that, calculated how many cases “should have been” seen in the other high risk nations, with a goal of seeing what sort of under-counting/under-detecting might be going on.

One country stands out. Thailand has reported 35 cases – one of the lowest case counts in the region, but it has the highest “Chinese visitor” risk factor by far. Using my mechanism, Thailand should have reported 256 cases, not 35. To make matters worse, unlike with Singapore, Chinese tourists can travel to Thailand without restriction. They even get free visas on arrival.

So how is it that Thailand, the top destination for Chinese outbound tourism, has been so fortunate?

Posted at Mish’s site – a video of a Wuhan mom venting, possibly her last act before she’s taken off to “quarantine”.  I wish I could understand mandarin.  [Subtitles are provided, but – I’d love to get the nuance]

Now imagine this frustration, multiplied by 1.4 billion people.  At what point does the CCP lose all legitimacy?  Her references to them “doing it all for money” – that’s not something I have heard before.

Call CCP losing the mandate of heaven a new grey swan.  Unlikely, but extremely potent.  Can you imagine the Chinese people freed from kleptocracy, under a government like the one that runs Taiwan?  Or Singapore?

Charles Hugh Smith made a prediction a few years ago that gold and the dollar would rise together, at least at the beginning of the collapse. I found that counterintuitive but have been watching to see if he turned out to be right. Gold and the dollar are currently rising together with $1,650 gold in sight this morning. Hmmmm.

Any chance that your spreadsheet can be used to estimate an expected number of cases for Indonesia? They report zero cases but have a lot of Chinese visitors/residents. Hard to believe there are no cases. Worse for me since I have three funded projects ongoing there….

Within the context of Stock Market Principle #1: The market exists as a vehicle for big players to take the money of the smaller players, I have a question regarding COVID-19. When do you think we get an “all-clear” about the virus situation, from a stock market perspective?

As you know, I think the market is really set-up for a big drop this year based on sentiment studies. But there is no way that happens until all the virus fear trade is flushed out of the market.

The big money play has got to be to “sell the news” on the resolution of COVID-19, when they alone will profit from the decline in the market (and maybe a couple of small lone-wolf traders). I just don’t know what the “resolution of COVID-19” will look like as a market signal, and when it might happen.

Personally, I have great respect for nature and believe COVID-19 is a huge deal. But I can’t let that influence my trading or I will get burned like I did a few weeks ago.

So what move(s) in the market tells us that virus-fear trade has capitulated? I huge drop in gold, bonds, and/or utilities? The dollar reversing? Another leg down in commodities to all time lows?

And what do you think is the time frame for this to happen? The end of summer? A fall “liquidity event” right before the election seems probable (I am strictly apolitical, always have been).

As always, thanks for your feedback….J

Big assumption: Iran’s case was a local infection, not a returnee from Wuhan.   If the deaths came from Wuhan returnees, the situation isn’t nearly as bad.

Note that Iran doesn’t even show up on that “country risk table.”

Thanks for that and the linked paper in your earlier post. Nice rule of thumb!

I think you’re overthinking this.  🙂

There was a pause before the collapse in 2008.  Lots of dithering around.  But then it all went downhill.  That’s what this period feels like right now.  I think its pretty risky to rely on getting some sort of clear-cut “fake happy news” signal before things tip over and sink.

Long term, I think things won’t be “all clear” for quite some time, unless we get saved by some drug that takes CFR from 2-5% down to < 0.5%.  (Wild-assed guess numbers here).

Thinking this is just going to be a “China mfg burp” ignores the silent pandemic already happening in the third world, of which Iran is the very first tip-o-the-iceberg indication.  See my math in the post, above.  It is relentless.  Iran has already indicated that the virus has probably spread throughout the country.

As a result, the task at hand is substantially harder than “getting China back to work.”

Not sure about timeframe for resolution.  Perhaps 3-4 months?  6-day doubling time, give it to 30-40% of the people in each country, add 3-4 weeks, and that’s probably the peak.

Knock-on effects for months afterwards – bankruptcies, money printing, sovereign defaults, currency collapses.  All that dollar-denominated debt goes boom.  They just can’t pay it back.  Especially not with the buck in the stratosphere.  You can already see it heading there, yes?

And crappy debt funds all blow up.  The first few, for real reasons, and the rest, contagion.

That’s if we don’t get a treatment that really helps that CFR, and is cheap and easy to produce and distribute.  Which we might have already – that anti-malarial drug.  That’s the wildcard.

I watch my own code too much.  Here’s some very old-school chart analysis for XLK, indicating a top may be forming.  The RSI divergence is pretty strong.  Add in a swing high and an MACD crossover and…down we go…hopefully… 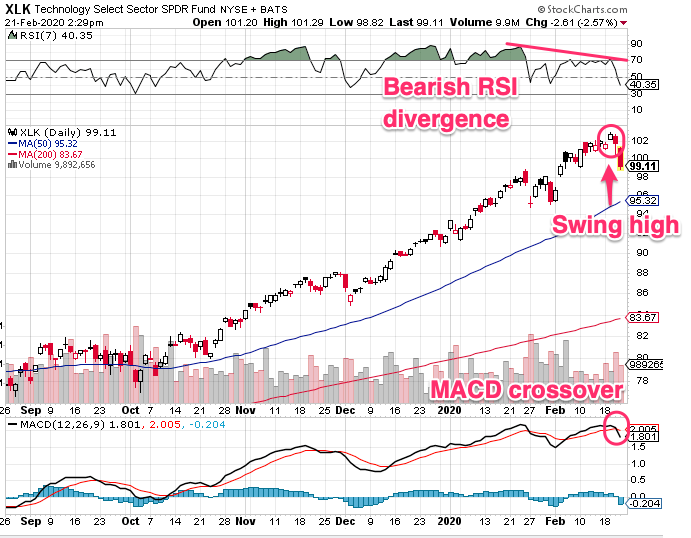 When Bubbles Pop, Only the First Sellers Escape Being Bagholders