Gold moved higher in Asia, but really took off 30 minutes after the US market opened, starting at roughly 10 am. The long white candle was a bullish continuation, forecaster climbed, moving higher into its uptrend. Gold is in strong uptrends in all three timeframes.

Today’s strong close above round number 1600 was a very positive sign – it was also a new 6-year closing high. It happened in the face of a massive dump of new paper COMEX contracts too.

Gold/euros rallied +21.44 [+1.46%] to 1486.93 on moderately heavy volume. The long white candle was a bullish continuation, forecaster climbed, moving higher into its uptrend. Gold/euros is in an uptrend in all three timeframes. Today was yet another new all time high for gold/Euros. 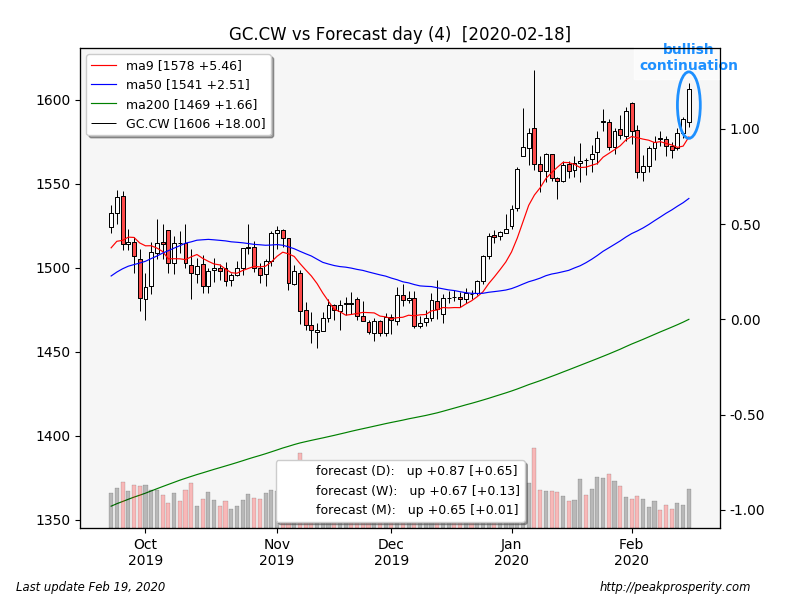 Silver roughly tracked gold higher, but its rally was more intense. The long white candle was a bullish continuation, forecaster climbed, moving higher into its uptrend. Silver is in an uptrend in the daily timeframe. Silver’s close – well above round number 18 – was quite positive, but silver has yet to break above several of its previous highs. Longer term, silver continues to lag substantially behind gold. Will it start to catch up now? That’s the question. 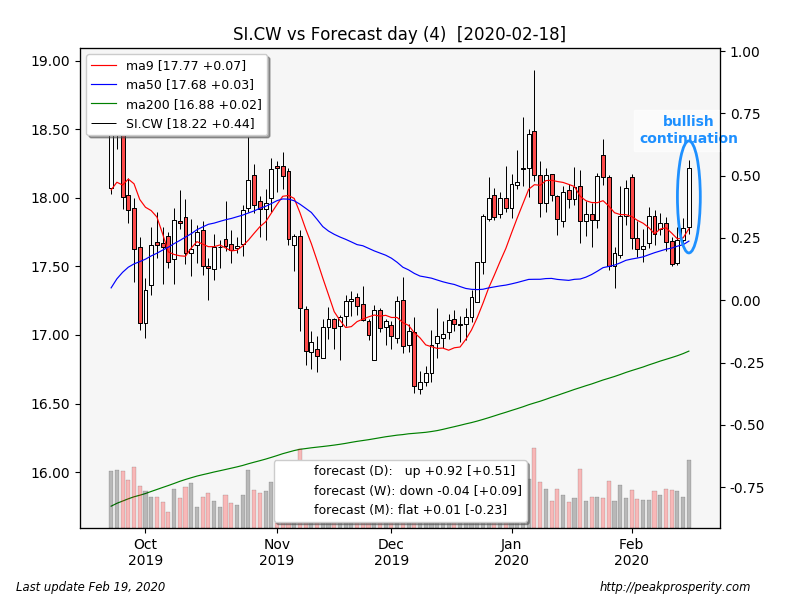 Miners gapped up at the open, hesitated a bit, then rallied along with gold for the remainder of the day, closing at the highs. GDX shot up +3.25% on very heavy volume, and GDXJ screamed higher, up +4.12% on extremely heavy volume. XAU ralied +3.86%, the swing low candle was a likely bullish reversal (65%), forecaster jumped sharply higher, moving back into an uptrend. XAU is back in an uptrend in all three timeframes.

Today marked a new 6-week closing high for the miners, which is a positive sign. 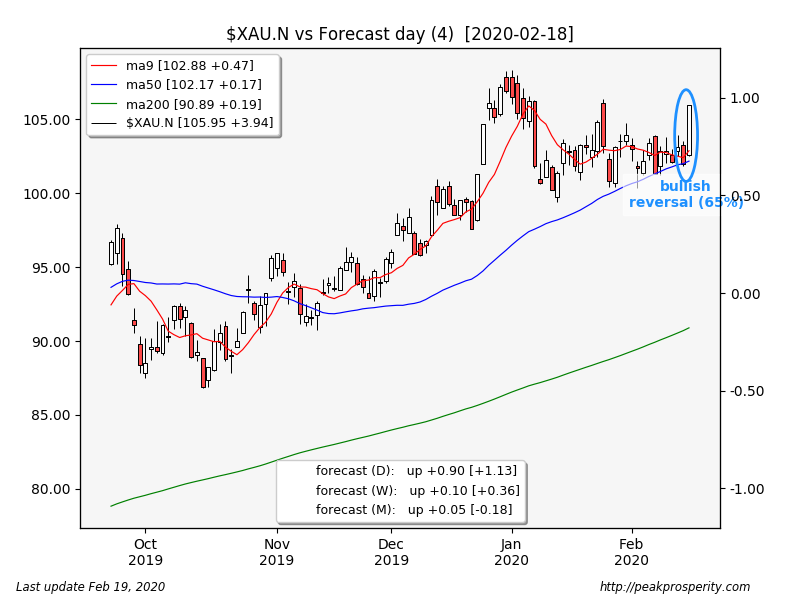 Copper’s high wave candle was a bullish continuation, and forecaster climbed, moving back into an uptrend. Copper is now in a strong uptrend in all three timeframes. 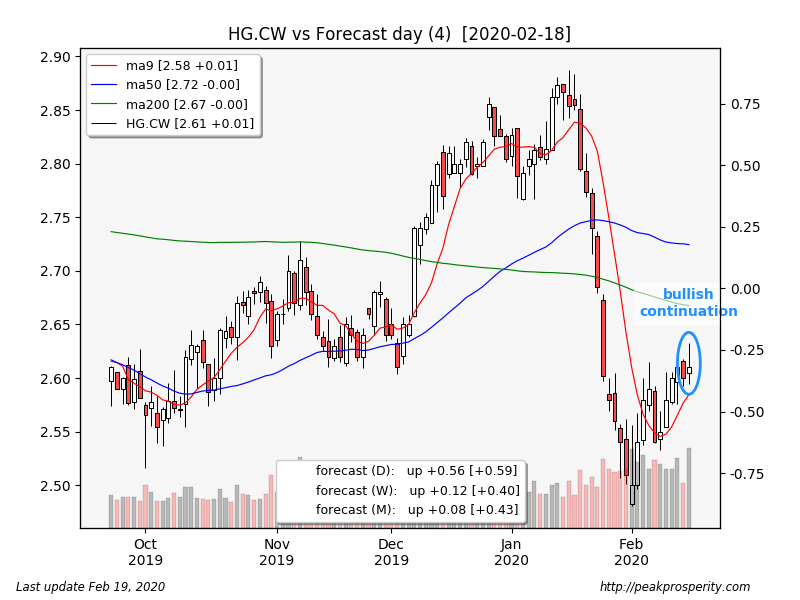 The buck climbed +0.33 [+0.33%] to 99.06 on moderate volume. The long white candle was a bullish continuation, and forecaster climbed, moving higher into its uptrend. The buck is in an uptrend in all three timeframes.

The buck closed right at its previous high set back in September. The move in the buck looks very bullish – the uptrends are quite strong.

For those people expecting USD to turn into confetti any moment now, I remind you of this well-worn story:

Two men were hiking in the woods, and came across a bear. One immediately swaps his hiking boots for running shoes. The other points out that since bears can move at 30 mph, outrunning the bear is impossible. The other replies, “I don’t have to outrun the bear, I just have to outrun you!”

And that’s why the dollar is rallying. USD is outrunning EUR. And at least right now, “the bear” is gold. 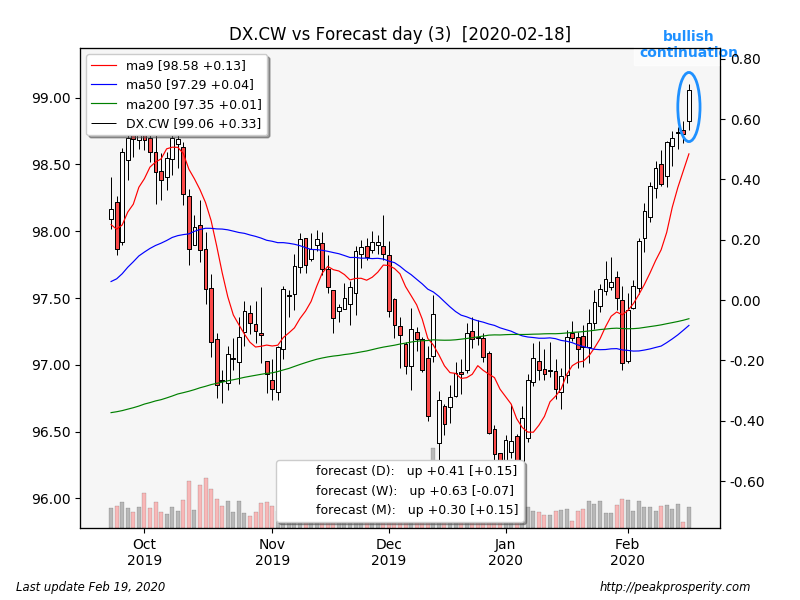 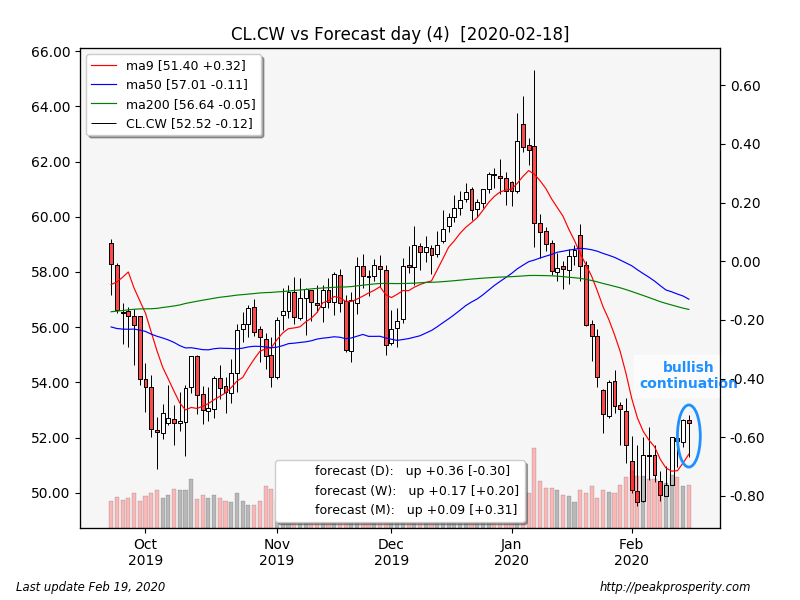 SPX fell -9.87 [-0.29%] to 3370.29 on moderate volume. The southern doji candle was a bearish continuation, forecaster dropped, but remains in an uptrend. SPX is still in an uptrend in all three timeframes. No reversal yet for SPX.

TLT climbed +0.68%. The spinning top candle was a possible bearish reversal (35%), but forecaster climbed, rising into an uptrend. TLT is in an uptrend in the daily and weekly timeframes. The 30-Year yield fell -3.0 bp to +2.01%.

TY moved up +0.14%. The long white candle was a bullish continuation, forecaster climbed, moving higher into its uptrend. TY is in an uptrend in all three timeframes. The 10-Year yield fell -3.0 bp to +1.56%. The TY uptrends are just moderate – but that’s a positive outcome given SPX at or near all time highs. 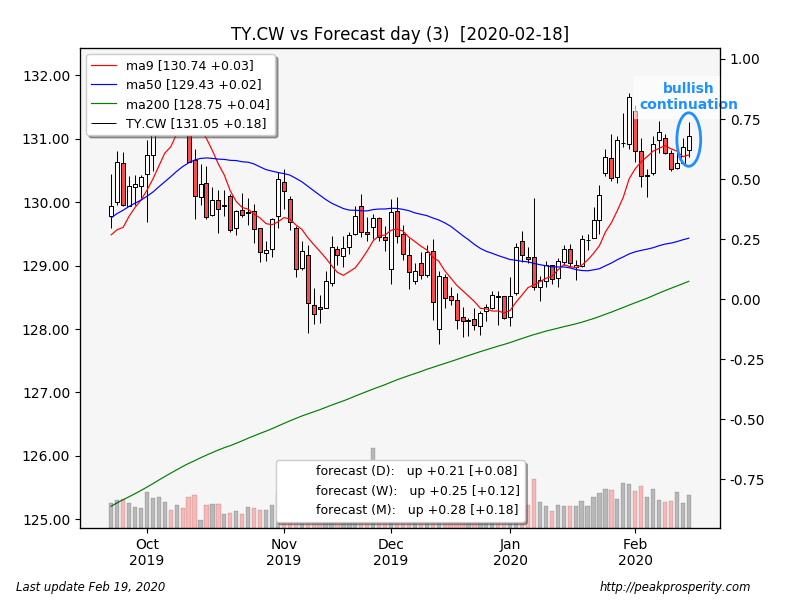 JNK fell -0.19%. The swing high candle was a likely bearish reversal (62%), forecaster dropped, but remains in an uptrend. JNK is in an uptrend in the daily timeframe. JNK might have reversed today. 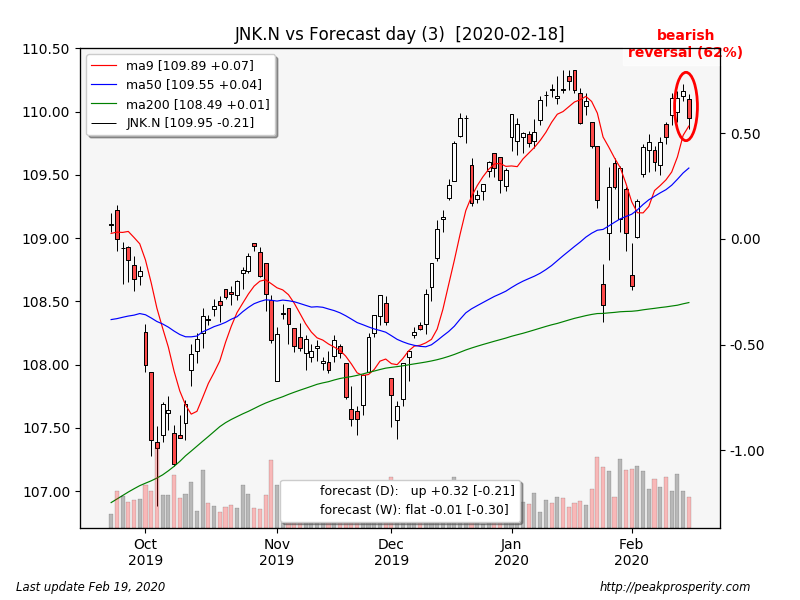 After a 3-day weekend, capped with AAPL issuing a revenue warning on Monday (and at least a 10% drop in near-term iphone manufacturing due to supply chain issues in China), the response from the markets was a bit confused.

PM staged a huge rally, which happened in the face of a very large increase in open interest – my guess is, given the amount of new paper, it probably involved official intervention. In addition, money poured into USD, taking the buck to a new 2-year closing high. Gold/Euros also made a new all time high, while EUR/USD made a 4-year low. If you live across the pond, and you are long gold, you have to be pretty happy at this point.

The rally in the bond markets was modest, however. While bonds did move higher, it was not even close to what we saw in PM. At the same time, the decline in risk assets (equities, and crappy debt) was also quite modest. While JNK did print a reversal, SPX did not.

Crude and copper mostly just moved sideways today. Will the 3-week rally in copper and the 2-week rally in crude continue? Both items look quite a bit more skeptical about the situation on the ground in China (and its impact on global economic activity) than SPX.

Meanwhile, the CCP is working overtime to shape the narrative on COVID-19. This was best illustrated by a series of talking points provided by China’s EU ambassador:

Where do I start? Quarantine 500 million people, and call the impact “limited”. China massively restricts travel for its own people – in some astonishingly draconian ways – but whines when foreigners want to take the same precautions. China complains about “unfairness” regarding transparency, after arresting Chinese doctors who were attempting to warn other doctors about the virus. And then, our friend from the CCP asks us to believe official CCP statistics about the virus. Essentially: “trust us!”

Back in the real world, AAPL’s revenue warning should take center stage, but it is one small island of reality peeping out of the sea of disinformation designed to hide what’s really going on: the world’s biggest manufacturer remains more or less offline. Apparently, compliance with Xi’s command to “return to work” was hindered by the requirement that all workers returning from their CNY holiday go through a 14-day quarantine process. Doh!

And after the experience of the Diamond Princess [roughly 23% of passengers that were actually tested turned up positive for the virus], do we really imagine that Wuhan doesn’t have a roughly similar percentage of infected people? Population 11 million, which could result in 2.5 million people infected (and, perhaps, eventually, 58,000 deaths).  But – “trust us.”

The CCP disinformation campaign has been effective, and it has not been materially challenged except for general warnings to be “cautious” about taking the CCP’s numbers as truth. Indeed, there appear to be widespread official efforts to downplay the facts that we actually know. When “Hermit Kingdom” North Korea provides a more straightforward analysis of the situation than most of the West, you have to ask yourself – why might this be?

The whole thing reminds me of the Clinton story back in the 90s: “tell the truth, slowly.”   The CCP’s absurd, almost comic-book suppression of truth is then followed up by a strikingly similar (but much more subtle) disinformation campaign in the West.

At this point, I have to ask: where is the West’s previously quite successful use of reason and evidence, which underpinned the Enlightenment and arguably forms the basis for Western civilization?  Enthusiasm for reason and evidence appears to be in short supply at the moment. Facts appear to be too scary to use.  We appear to be optimizing for Social Harmony instead.

Maybe we’ll get lucky. Maybe a cure will appear, just in the nick of time. We will just have to see how it plays out.

But with all the disinformation, and the resulting market confusion, we did get one clear market signal: gold staged a very strong rally, in spite of a dollar rally, and in spite of an impressive rain of new paper at the COMEX.