Market-moving news: today, the West found out that the number of infections of COVID-19 (formerly known as “corona virus”, “WuFlu”, “the Wuhan virus”, etc) wasn’t declining in Wuhan after all. What’s more, there are an astonishingly large number of people dying – the CCP admitted to 242 in just one day. Is this even the real number? Given the CCP’s demonstrated enthusiasm for emphasizing social harmony over truth (actually arresting doctors who dared to warn their colleagues about the new virus), the smart money says: no. Or maybe even, “whaddaya, stoopid?”

But the reluctant, likely partial admission by the CCP of the real state of affairs on the ground drove gold, silver, and bonds higher, while risk assets took a brief pause, and copper and crude paused in their recovery.

Gold spiked early in Asia trading due to the news out of China, eventually ending the day near the highs. The confirmed bullish spinning top candle was a probable bullish reversal (59%), forecaster climbed, rising into an uptrend. Gold is back in an uptrend in all three timeframes.

Gold/euros rallied +14.29 [+0.99%] to 1457.70. The long white candle was a bullish continuation, forecaster climbed, moving higher into its uptrend. Gold/euros remains in an uptrend in all three timeframes. 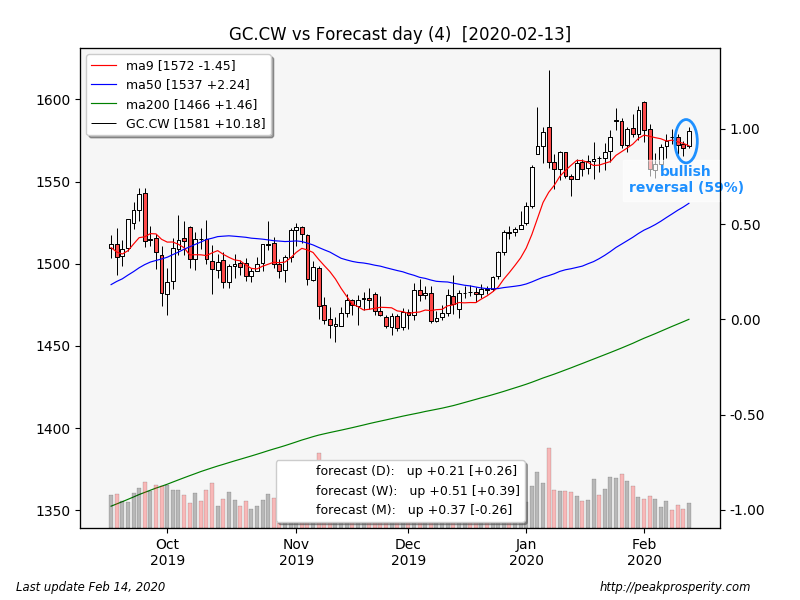 Silver more or less followed gold’s arc higher today. The long white candle was a low-percentage bearish reversal (29%), but forecaster climbed, rising into an uptrend. Silver is in a downtrend in both the weekly and monthly timeframes. 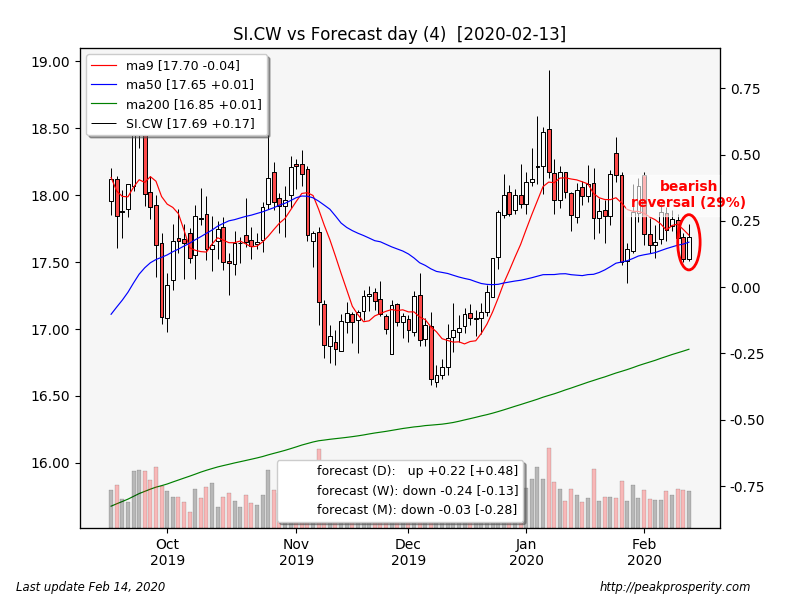 The miners gapped up at the open, tried to rally, but the intraday rally mostly failed. GDX climbed +0.71% on moderately light volume, and GDXJ rpse +1.36% on moderately light volume also. XAU moved up +1.00%, the shooting star candle was a reasonably strong bearish reversal (41%), but forecaster climbed, moving into an uptrend. XAU is in a downtrend in both the weekly and monthly timeframes. 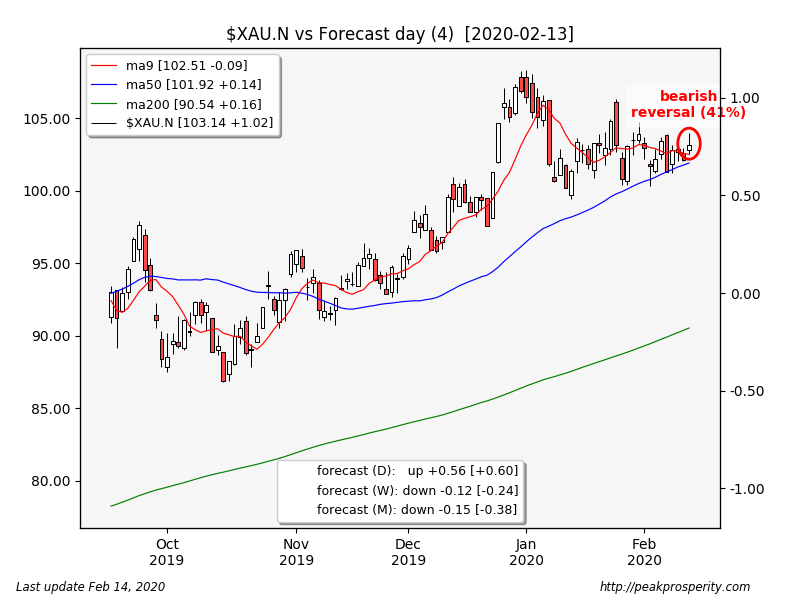 Copper’s spinning top candle was a bullish continuation, and forecaster moved higher into its uptrend. Copper remains in an uptrend in both daily and monthly timeframes. Copper’s rally off the Jan 31 lows continues. Note that Jan 31 low was the maximum value for the search term “corona virus” in google trends. 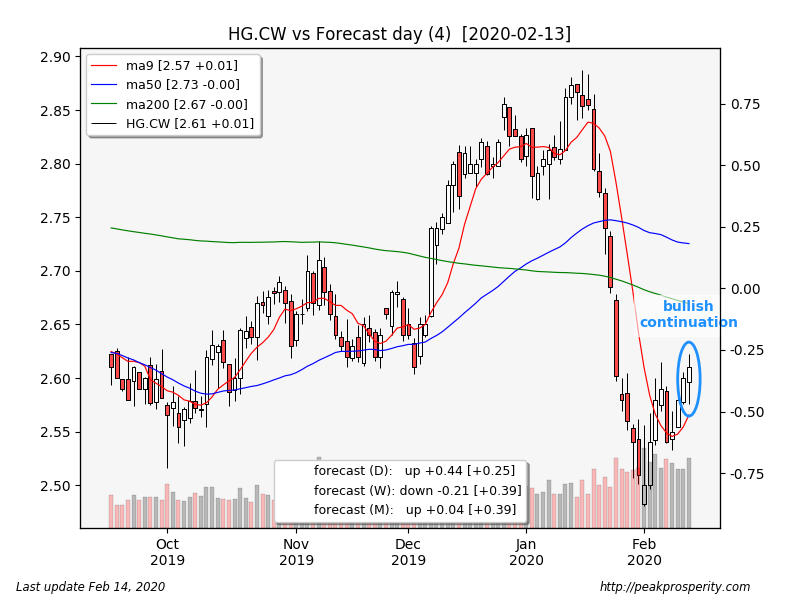 Major currency moves included: EUR [-0.33%], GBP [+0.68%], AUD [-0.30%]. Today’s new low in the Euro is yet another 4-year low. Folks in the Eurozone are worried about a rate cut by the ECB (further into negative territory) in response to the ongoing manufacturing recession, which will only be exacerbated by supply chain issues in China and the expected plunge in Chinese demand. 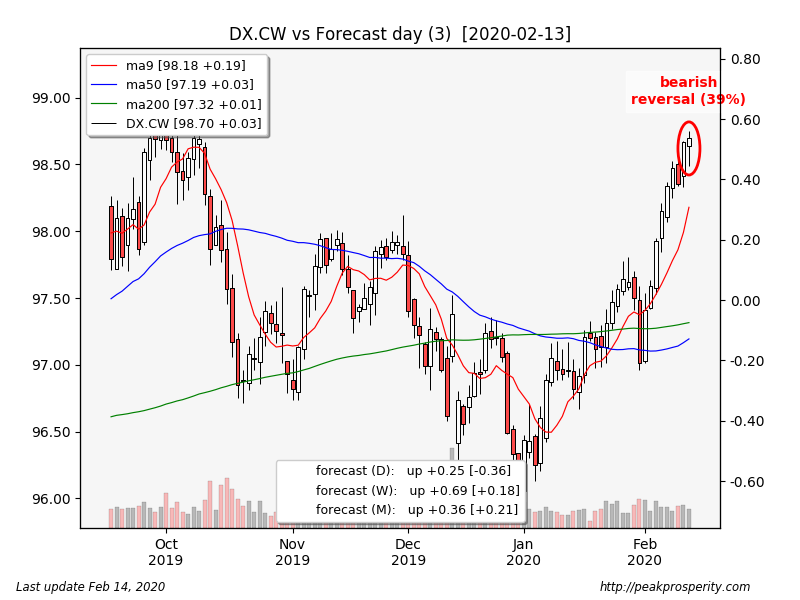 Crude fell -0.13 [-0.25%] to 51.89 on moderately heavy volume. The bearish harami candle was actually a bullish continuation, and forecaster climbed, moving higher into its uptrend. Crude is in an uptrend in the daily and monthly timeframes. No bearish reversal yet for crude. 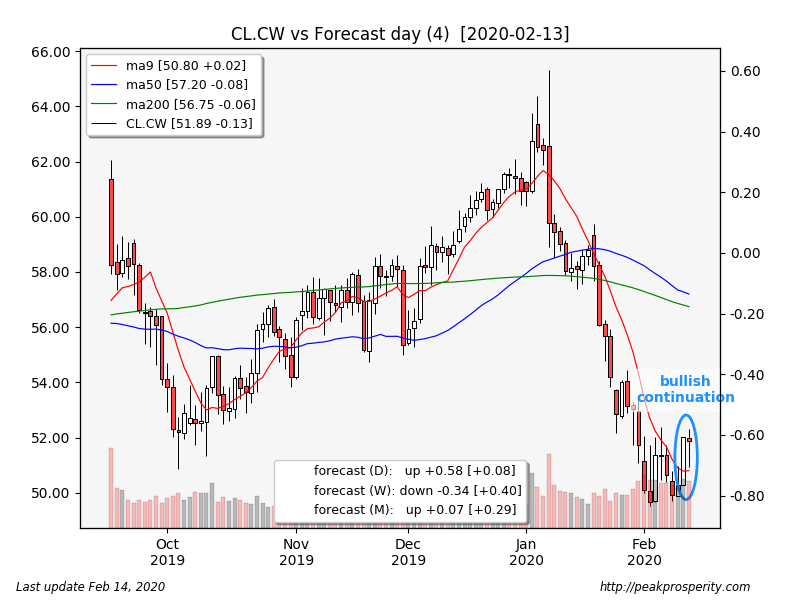 TSLA staged an amazing comeback today; having sold off in the after market yesterday due to reports of a technical issue with the Model S, the issue rallied strongly today after…get this…announcing it would sell more shares in a secondary offering. So. Existing shareholders are going to be diluted, so the market’s response? BUY MORE SHARES! Simply incredible.

TLT climbed +0.38%. The confirmed bullish nr7 candle was a reasonably strong bullish reversal (43%), forecaster moved higher, but remains in a downtrend. TLT is in an uptrend in the weekly timeframe, and may be about to reverse back up on the daily timeframe. The 30-Year yield fell -2.0 bp to +2.07%.

TY moved up +0.06%. The shooting star candle was a reasonably strong bearish reversal (43%), but forecaster climbed, rising into an uptrend. TY is now in an uptrend in all three timeframes. The 10-Year yield was unchanged at +1.62%.

Bonds are hinting at a return to the safe haven trade. 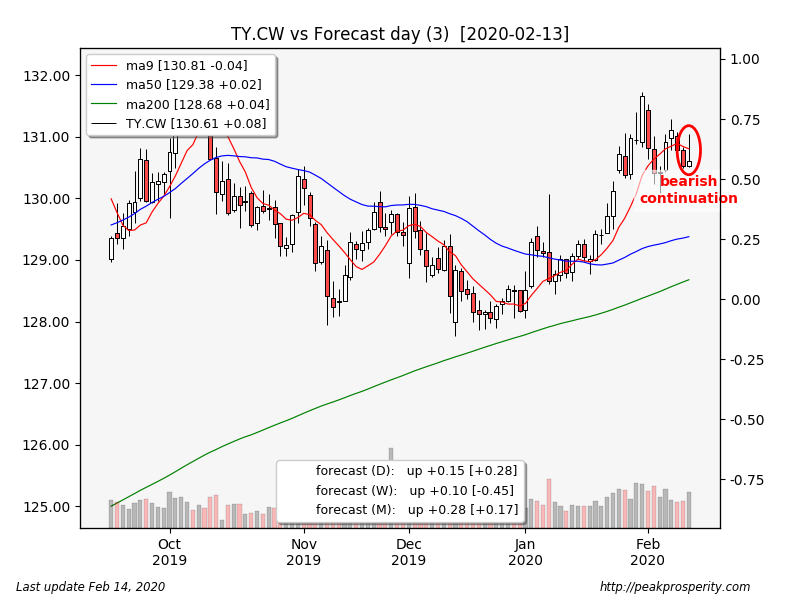 JNK closed the day unchanged. The long white candle was a bullish continuation, and forecaster dropped, but remains in an uptrend. JNK is in an uptrend in the daily and weekly timeframes. 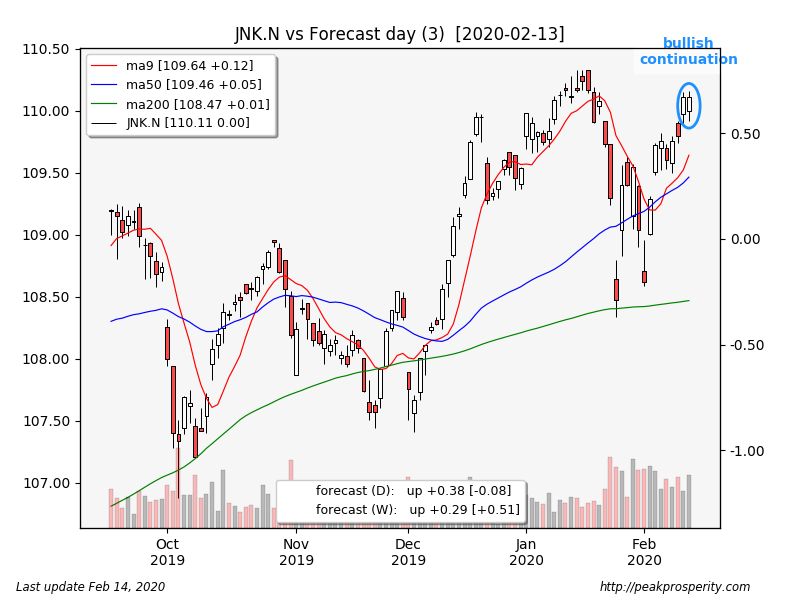 The bad news out of Wuhan largely drove the market today. Risk assets stopped rising, and havens started to recover from the recent “infections are falling”-driven move.

In spite of the bullish-looking reversal in gold, crappy debt, equities, copper and crude remain in daily-chart recovery uptrends. How long will this last? Right now, the sense is that the US will somehow dodge the bullet, perhaps due to the travel restrictions, distance, and, well, just being exceptional.

Trump economic advisor Kudow aided this perception by opining that the economic impact on the US from the virus would be “quite minimal”, but then pointed out “if we don’t get good information out of China, it’s very hard for us to make a decent assessment.”

“President Xi assured President Trump that China was on it and there would be openness, they would accept our help.

We’re more than willing to work with the UN [and] WHO on this and they won’t let us. I don’t know what their motives are. I do know that apparently more and more people are suffering over there. Is the Politburo really being honest with us?”

From these comments, you can start to see the setup. Xi promised Trump they’d be open. Xi said he’d accept help. And things are getting worse, and they aren’t accepting help. Heavens to Betsy, why would they be doing this?

And that’s the setup: when things go south, Trump will throw Xi under the bus (ever so reluctantly) for lying about the seriousness of the situation, and not accepting help when offered. All the economic impact on the US will be laid at the feet of Xi and the CCP. What’s more, Trump will look good for having the good judgement to impose travel restrictions in spite of the WHO recommendations to the contrary.

What does that mean for us? In spite of the jump in admitted infections and deaths, the market still believes in the CCP tooth fairy and its apparent ability to change facts on the ground via orders from the Central Committee. You can see that in the bounce in both copper and crude. That’s just where things are.  And we can’t rely on our government to execute any big reveal. They seem to be waiting for the shoe to drop on its own.

Today’s gold rally may be more about the prospect of negative rates in Europe to “fight the recession” than anything else.

Speaking of which, gold/Euros broke out to a new all time high. This situation means no selling pressure from trapped longs looking to get out even, and instead, there is an increased element of FOMO as people start to feel left behind as price jumps higher. Will the ECB cut rates even more negative to “stimulate the economy?” The more negative rates go, the better gold looks. EUR/USD just fell to a 4-year low.

So while we wait for the “truth bomb” on COVID-19 onto a surprised market, I’ll leave you with a chart of gold/Euros.

Did I mention it hit a new all time high today? 🙂 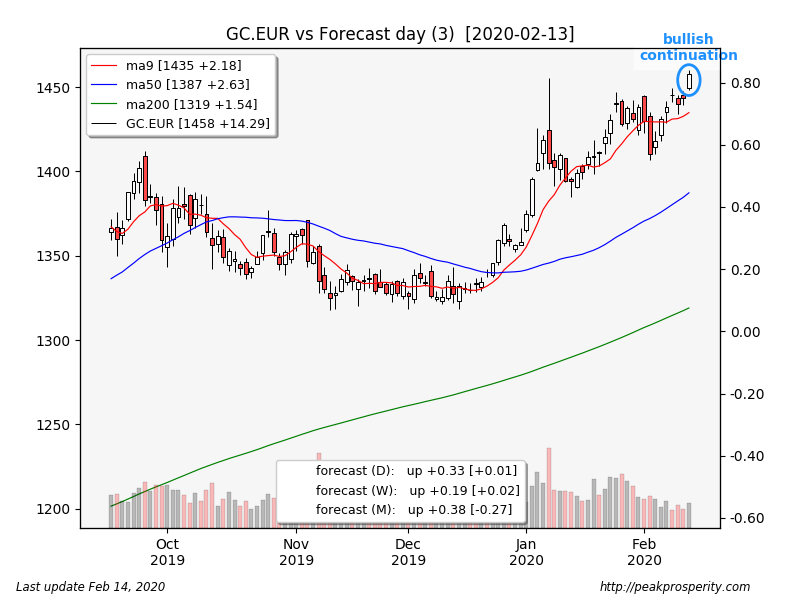 Have we entered an alternative universe?