The narrative today was all about optimism about Hubei case reporting. As Armstrong’s site reported:

China’s Hubei province reported its lowest number of new coronavirus cases since January. This gives officials hope that the outbreak may be approaching its peak even as experts remain wary about its spread outside of China.

While normally I like Armstrong, I have noticed that he seems to be totally in the tank for the CCP. He treats them ever so gingerly, careful never to offend, while he does not hesitate to call bullshit on the crap that the governments in the West spew from time to time.

Gold mostly went nowhere today. The spinning top candle was a possible bullish reversal (38%), forecaster climbed, but remains in a very slight downtrend. Gold is in an uptrend in the weekly and monthly timeframes.

Gold/euros climbed +3.71 [+0.26%] to 1443.41 on moderately light volume. The short black candle was a bullish continuation, forecaster climbed, moving higher into its uptrend. Gold/euros remains in an uptrend in all three timeframes, and quite near its all time high.

Futures markets are projecting a 5.5% percent chance of a rate cut at the next FOMC meeting. 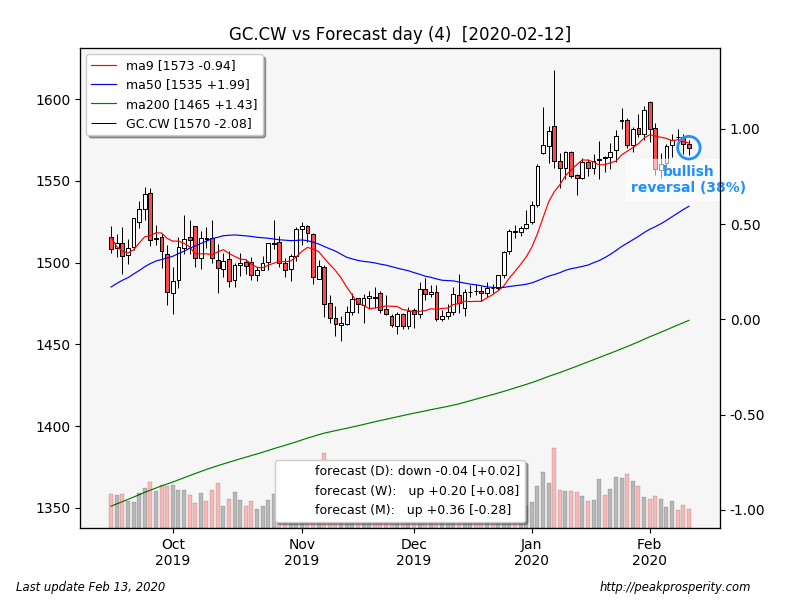 Silver moved lower all day long. The short black candle was a bearish continuation, and forecaster dropped, moving into a downtrend. Silver is now in a downtrend in all three timeframes. Silver’s drop below the 50 MA looks bearish. 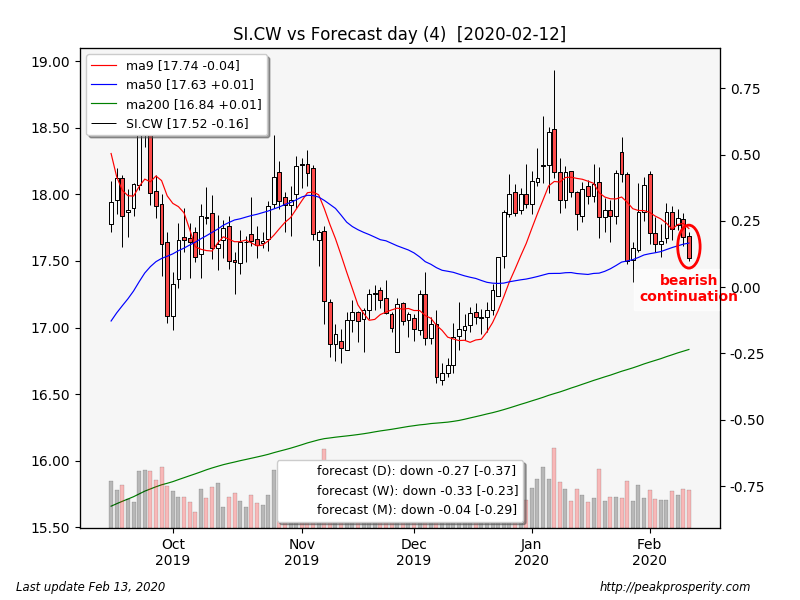 Miners gapped down at the open, tried to rally, but the rally failed. GDX dropped -1.09% on moderately light volume, and GDXJ moved down -0.74% on moderately light volume. XAU fell -0.73%, The short black/NR7 candle was unrated, and forecaster fell, moving into a downtrend. XAU is now in a downtrend in all three timeframes. While the trends aren’t too strong yet, the miners are not looking all that great. 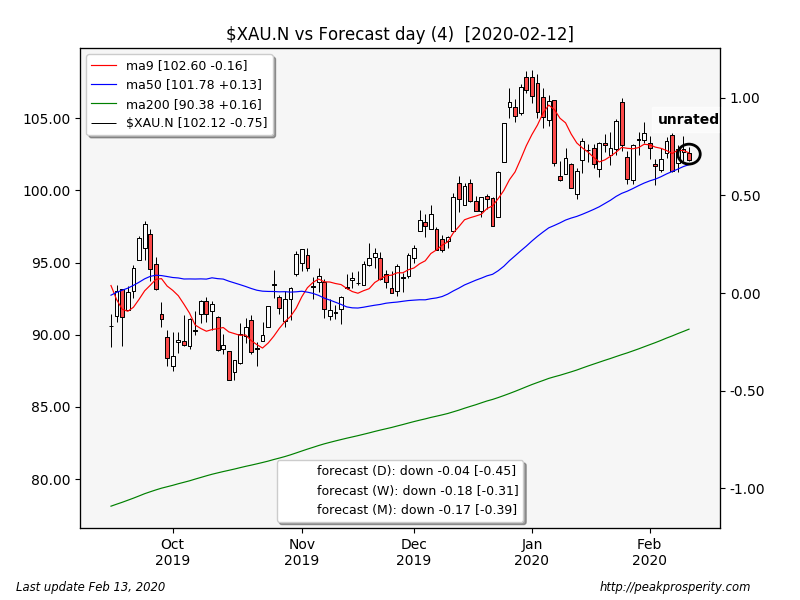 Copper’s long white candle was a bullish continuation, and forecaster moved lower but remains in an uptrend. Copper is in an uptrend in the daily timeframe. This is a 12-day high for copper, which reflects the positive sentiment from the “falling infections in Hubei” narrative put out by our friends at the CCP. 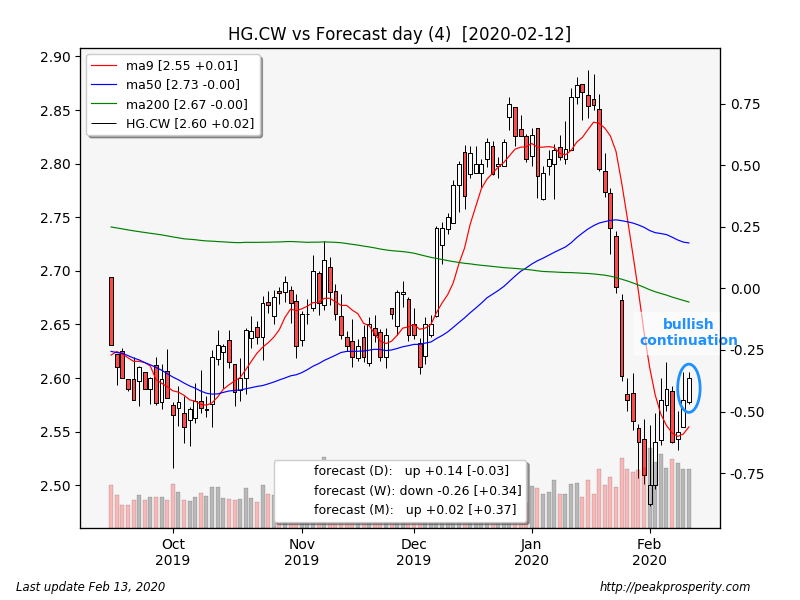 The buck climbed +0.32 [+0.33%] to 98.67 on moderately heavy volume. The closing white marubozu candle was a bullish continuation, but forecaster was unchanged. The buck is in a strong uptrend in all three timeframes.

Major currency moves included: EUR [-0.40%], AUD [+0.36%]. Today the Euro broke down to a 4 year low; the 1.08 price level was last seen back in mid-2016. Germany remains in a manufacturing recession, Eurozone industrial output dropped sharply, and the markets are guessing that the ECB will actually start to cut rates in 2020. 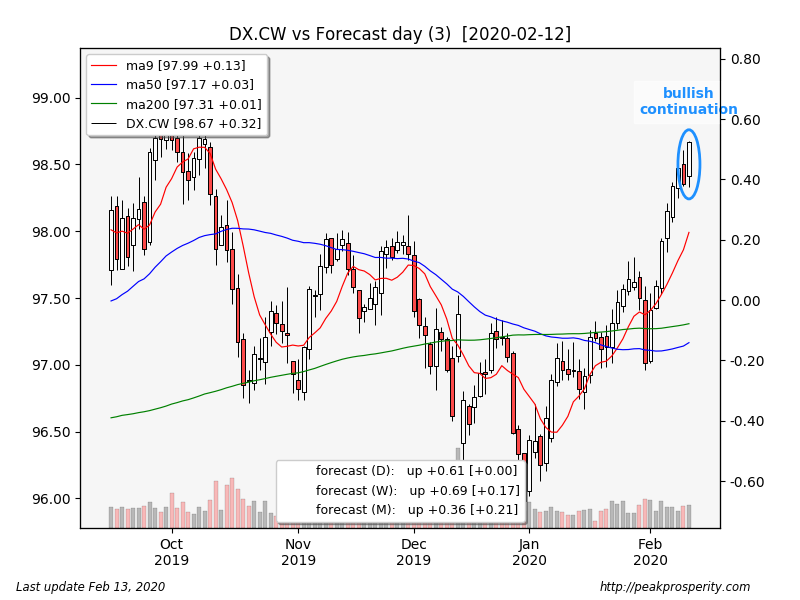 Crude screamed higher, up +1.73 [+3.44%] to 52.02 on moderately heavy volume. The confirmed bullish nr7 candle was a reasonably strong bullish reversal (44%), and forecaster climbed, moving into an uptrend. Crude is in an uptrend in the daily and monthly timeframes. Crude also managed to close convincingly above its 9 MA, which is a bullish sign.

EIA report was bearish: crude +7.5m, gasoline -0.1m, distillates -2.0. The market didn’t like the report, selling off immediately afterwards, but it recovered all those losses by end of day. It was all about the bullish sentiment from the “declining infection count” from Hubei. 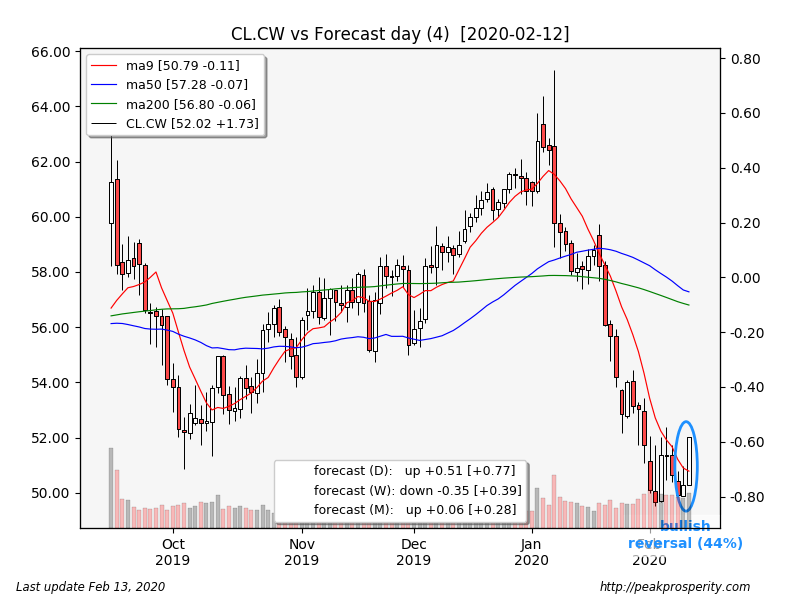 SPX rallied +21.70 [+0.65%] to 3379.45 on moderate volume. More than half of today’s gains came in the futures markets overnight. Today marked yet another all time high for SPX. The opening white marubozu candle was a bullish continuation, and forecaster climbed, moving higher into its uptrend. SPX remains in a strong uptrend in all three timeframes.

TY moved down -0.19%. The short black/NR7 candle was a bearish continuation, and forecaster fell, moving deeper into its downtrend. TY remains in an uptrend in the weekly and monthly timeframes. The 10-Year yield rose +4.0 bp to +1.63%. 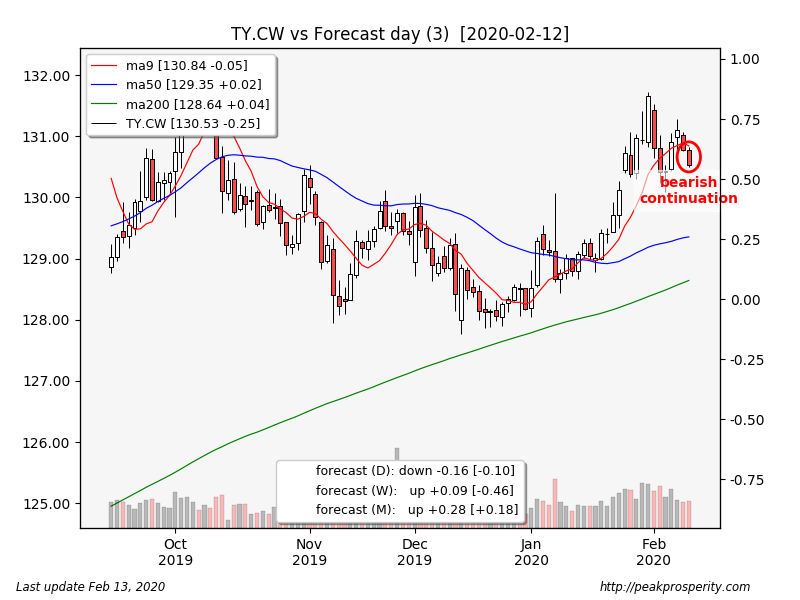 JNK rose +0.28%. The long white candle was a bullish continuation, and forecaster climbed, moving higher into its uptrend. JNK is in a strong uptrend in the daily and weekly timeframes. 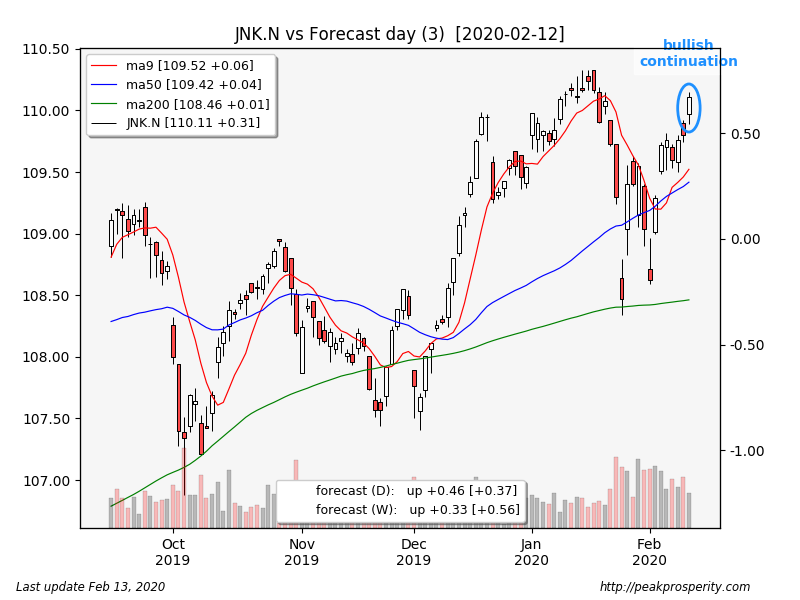 Jerome Powell, during a speech today, actually noted that the US spends a great deal of money on healthcare, but has little to show for it. My goodness. 1000 PhD economists at the Fed took a decade to figure this out. If they paid for their own healthcare, they would have twigged to this a whole lot earlier. Still, better late than never I suppose.

Someone is getting this huge chunk of GDP, but it isn’t you and me. As George Carlin said, “It’s a big club, and you ain’t in it.” All this money harvested from US working people, stuffed into the bulging pockets of the sickcare cartel, is money taken from consumer spending, saving, and debt repayment.

It was a risk on day; crappy debt and equities made new highs, with SPX making yet another new all time high. Crude is actually looking strong for the first time in six weeks, copper also moved higher. Meanwhile, gold chopped sideways, silver looks as though it is about to break down more seriously after the close below the 50 MA, and bonds fell also.

The narrative continued to be, “China is returning to work” along with the new one, “the number of infections (reported by the CCP) are dropping.” People must really want to believe in authority, in spite of all the lies the CCP has told us in the past. “Surely, this time they are being truthful.”

And then…after market close in New York, the CCP announced that the number of infections in Wuhan screamed higher, allegedly because instead of relying on tests to confirm cases, they are now diagnosing cases from symptoms.

The New York Times was not pleased with the change in narrative: “Coronavirus Cases Seemed to Be Leveling Off. Not Anymore.” If you take what the power structure says unquestioningly, you will find yourself tricked – repeatedly. First it was WMD in Iraq. Then “Russia Collusion.” Now – Cases Leveling Off in Hubei. You’d think they’d grow skeptical after all this time. But no.

Deaths also jumped higher. Possibly: the CCP realized they could no longer cover up all the deaths (hundreds of bodies – 242 deaths reported just today – are hard to hide), so they had to admit to more infections or else the observed fatality rate would end up screaming higher, eventually making the virus more fatal than Ebola. I’m guessing the infection numbers are simply constructed from whole cloth, a fabrication created to fool their gullible friends in the Western media.

This situation also explains why the CCP isn’t allowing doctors from the US to come and assist. Again, bodies in such large numbers are really hard to hide.

Here are my two takeaways:

1) as long as the CCP resists transparency, we must assume – for our own safety – that things are much worse than they are telling us. “Watch what they do; ignore what they say.”

2) the truth will eventually be revealed.

Diamond Princess update: 44 new confirmed cases, with the total now confirmed infected: 218, including 15 crew members. The more people they test, the more they find.  Project that onto Hubei, and you have three quarters of a million people infected. And Japan has only tested a small fraction of the passengers and crew!

Have a look at US dollar futures Dave. Currently trading at 99.02 and perhaps just .16 points shy of a monthly level breakout. A dollar reversal looks likely however but should price breach above that 18 year long resistance line then gold may get knackered (technically speaking of course!).

But I am not a gold bear. Not yet anyway. The chart is warning we could see a sharp move higher in the second half of February. Over 1650 within 14 days.